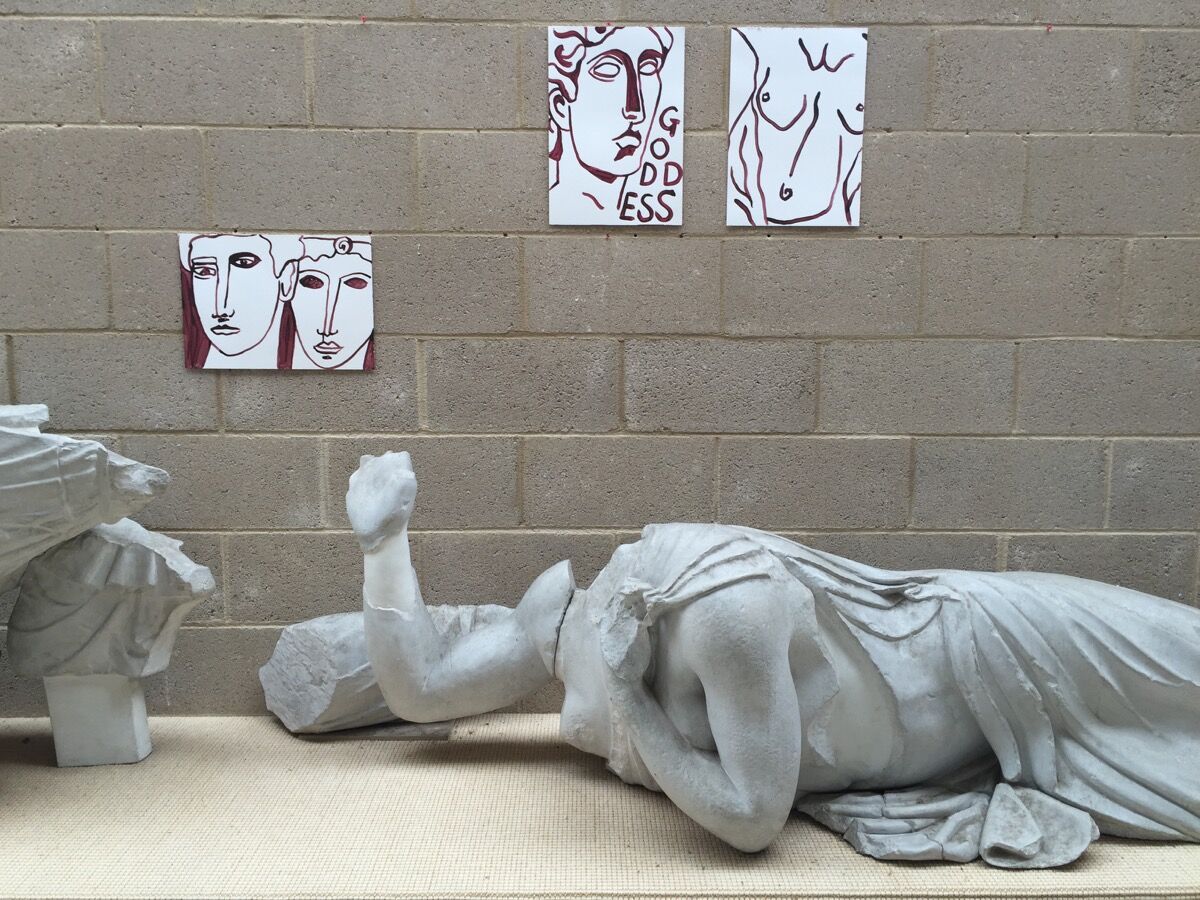 Few genres of art are as entangled with myth as that of ancient
Greek and Roman sculpture
. Many of us have had the experience of trudging through the halls of a major museum and gazing at the “perfect” sculpted figures of the Greeks and Romans. They may depict unfamiliar gods or tell strange stories we’ve never heard. From their shimmering white marble to the pristine display cases that house them, such ancient sculptures can feel like they’re speaking in an impossible foreign language, from a world so far away that they carry no meaning in the present.
Indeed, a common misconception is that the ancient Greek art is, well, ancient. This is partly due to the way it is displayed—as stoic, still objects in a museum, not as pieces animated by a living relevant context. A new exhibition at the the Museum of Classical Archaeology at Cambridge titled “RECASTING” uses the university’s robust collection of over 600 19th-century plaster casts of Classical sculptures to shake up the conventional timeline. Juxtaposing the work of seven contemporary artists with the Greek and Roman sculptures, the exhibition looks to showcase the enduring importance of ancient art and trace how artmaking in the present is tied to the artmaking of thousands of years ago. 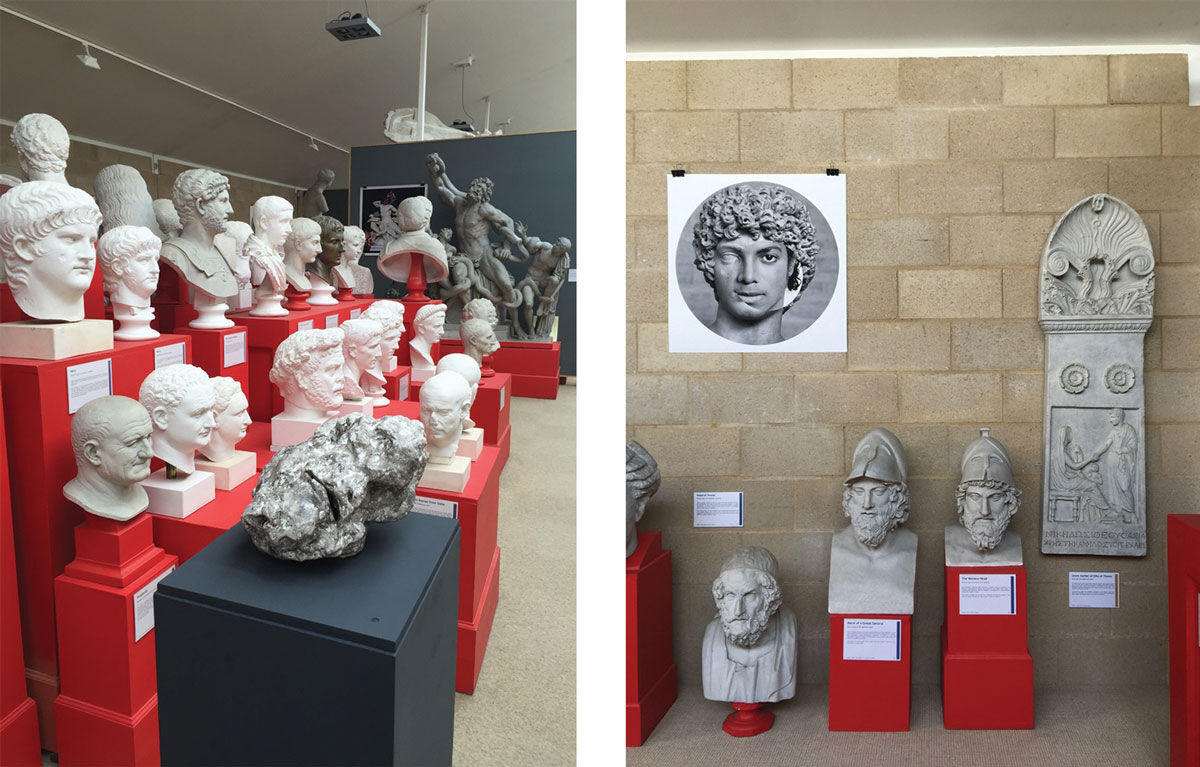 A crucial first step is to break our eyes out of the patterns of seeing we’re so used to employing at museums. “Classical sculptures are in a sense very familiar,” says Ruth Allen, a graduate researcher who curated the show along with James Cahill. “You almost don’t really look at them anymore—they’re so iconic.” To this end, the Scottish-born artist REILLY has digitally collaged the immaculate forms of ancient sculptures with contemporary celebrities like Michael Jackson and Rihanna. Inserting instantly recognizable faces into ancient iconography, he does “a good job of pulling the viewer up short and making us look at the ancient work that is incorporated into the new composite image,” Allen notes.
Today, the ancient sculptures that have survived are primarily made from white stone, and are often seen as symbols of white male power. (Many don’t know that these works were originally painted in bright, garish colors.) REILLY’s work also reminds us, as Allen explains, that “the Greek and Roman worlds were a more multiracial world than we think.” Some of the gods that these ancient civilizations worshiped have been suggested to be Near-East imports, and thus evidence of the extent to which Greece and Rome, today seen by some as the “Western ideal,” were profoundly influenced by Mediterranean, Middle- and Near-Eastern, and African cultures. It is possible to see these sculptures as more than just white marble, and in a way that complicates Western art history. Advertisement
If the contemporary helps us rethink the past, the opposite is also true. “In a broader sense, how we look at art or even decide that something is an artwork, is very tied into the classical,” says Cahill. The show includes a video work by Rosie O’Grady, in which the artist filmed a classical plaster cast collection like the one at Cambridge. “In that video, her camera pans across the classical statue, looking at it from all different angles in a way that actually evokes the way classical statutes have been looked at for centuries—very meticulously, angle by angle,” Cahill explains. He adds that along with other ways of viewing art, this style of examination, which is still how students are taught to look at contemporary sculpture, “was enshrined in classical times and remains as relevant now as ever.”
And when we do actually look, we find that the ancient Greeks and Romans were often grappling with subjects that we still wrestle with today. “Greek and Roman art is hugely valuable for thinking about gender, body types, celebrity—there are all sorts of interesting concepts that are still important to us that we can explore through this art,” Allen explains, and adds that “the way in which we think about the body is inextricably bound up with the classical.” But that classical body is often more than
the calm, posed, herculean figure
one often conjures. Take a look at the tortured bodies of the Laocoön sculpture, or a series of seemingly crude drawings by contemporary artist Paul Kindersley included in the exhibition. They render faces and motifs seen in classical art as almost playful, diluting stoic power with a sense of light-hearted humanity. 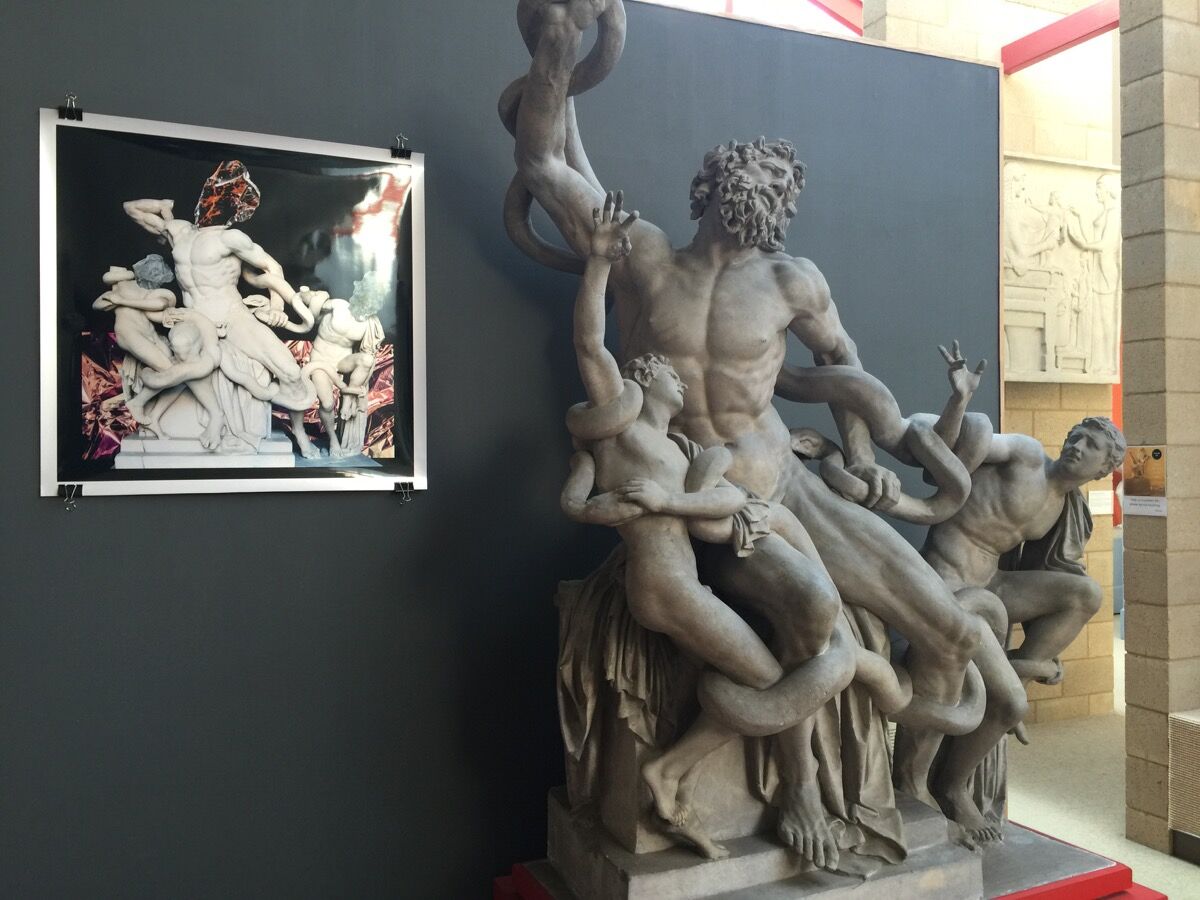 Works of ancient art today are treated as singular objects. But mechanical reproduction through casting and other methods during ancient times meant that, for the most part, ancient sculptures were not one-offs. And despite how marble works are seen today, many of the originals in ancient Greece were actually made of bronze—a quality that allowed them to be melted down by invaders or for cash, which explains why only the marble copies endure today. “It is an aesthetic and pleasurable thing to look at an artwork. But it can be a space for thinking about important concepts. And that was as true in ancient Greece and Rome as it is today,” Allen explains.
We’ll obviously never see the works of ancient Greeks and Romans exactly as those at the time saw them. The pieces were
often created as religious objects
—a function they no longer retain. Still, that doesn’t mean they have lost their meaning. “We talk about how we should value them because they’re beautiful; that we should value them because they’re old. But I think we should show that there are other ways of looking at them,” says Allen. Indeed, if there is one thing that speaks to the enduring importance of ancient art, it is that it always allows for other ways of looking.
Isaac Kaplan is an Associate Editor at Artsy.
Related Stories