How Artists Have Responded to the Tragedy in Orlando 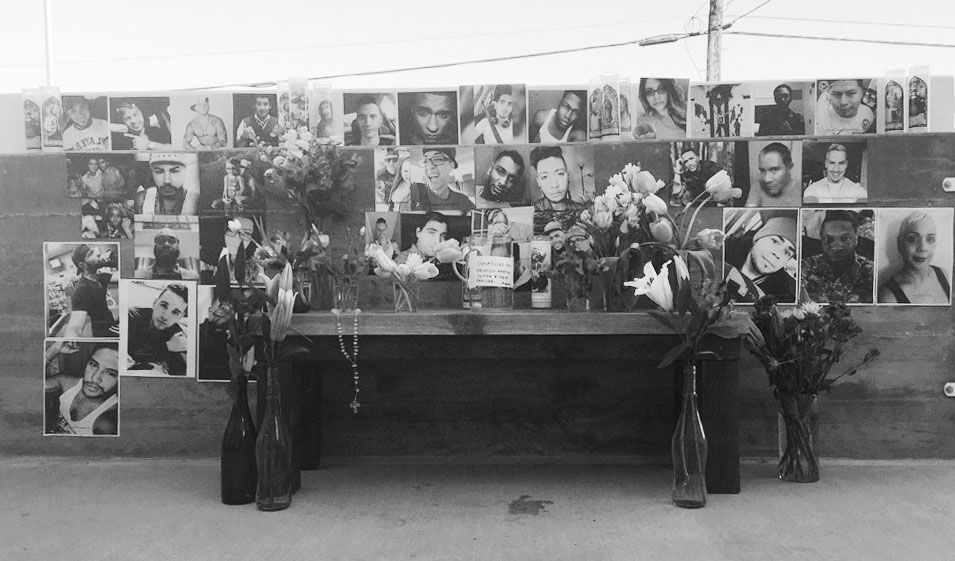 PSSST’s altar for the victims of the Orlando shooting. Photo courtesy of PSSST.

In the weeks since the mass shooting at Orlando’s Pulse nightclub on June 12th, national and international communities, including artists, have struggled to address the tragedy at hand. In addition to being the most horrific mass shooting in U.S. history, it occurred in a place that celebrates the very freedom and self-expression that artists have been known to champion. As news of the shooting broke and spread across international media outlets, images that evoke the scene, as well as tributes to the victims, have proliferated, and filtered into artworks, installations, and performances. We recently spoke to three artists who have honored the victims of Orlando through art over the past week. Below, artists E.V. Day, Terence Koh, and Barnett Cohen (of L.A. art space PSSST) share insights on how they’ve attempted to process this tragic event.

When Day heard about the shooting in Orlando, she was finishing a large window installation, Perpetual Motion (2016), which will be on display at the Frances Young Tang Teaching Museum and Art Gallery in Saratoga Springs, New York, on July 2nd. In her signature style of deconstructing and suspending clothing, Day cut black fishnet body suits into sections and stretched them within a steel frame, attaching them with industrial steel turnbuckles. As she arrayed the fishnet material, figures began to emerge.
“After Orlando, I started adding more figures and I decided that I wanted the piece to suggest figures dancing,” she says. Knowing that the piece would be displayed in a large window, she thought of Twin Peaks Tavern, the famous gay bar in San Francisco’s Castro District that installed huge plate glass windows so that passersby could see everything happening inside. “I felt I was channeling that spirit, of pleasure and celebration, and it made me feel like I could do something,” she says. “At the same time, because of the suspension, there’s a tension, which suggests the other side—the limitations of our society, in which, unfortunately, people have to seek out certain spaces in order to feel safe.”

A mass shooting and a beehive may seem to be unrelated entities, but the notorious performance artist Terence Koh saw a connection. His installation bee chapel (2016), at Andrew Edlin Gallery, is a beehive that visitors can safely enter, one at a time. The buzzing of the bees is captured by a microphone and broadcast into outer space via a transmitter, which Koh worked with NASA to set up. “The show is about vibrations, and putting vibrations out into the world,” Koh says.
Nightclubs have their own vibrations, hence the name of the Orlando club, Pulse. “I’m gay, and I used to go to nightclubs all the time,” Koh says. “The shooting reminded me that these clubs are about safety and happiness.”
To memorialize the victims, Koh staged a performance in which he chanted and sang their names, which were broadcast into space along with the bees’ buzzing. The ceremony was inspired by Koh’s time at a Zen monastery near his home in the Catskills, where he found himself deeply moved by Buddhist chants for the dead. He recalls, “My chanting, which I practiced for several days, resonated with the noise of the bees, in a sort of chorus, and I almost felt like the victims were alive in that moment.” After the ceremony, there was a party, and six gay films were screened simultaneously in the gallery. “We needed that happiness and celebration,” Koh muses.

The non-profit artist-run space PSSST in Los Angeles aims to be “a queer space, a decentralized space, a dance floor, with no hierarchies, where everyone is welcome, regardless of who you are or where you’re from,” says Barnett Cohen, who is the space’s co-founder and artistic director, along with Jules Gimbrone. The space opened its first exhibition last week, titled “Everybody! Come Stand On the Altar!,” a 30-minute, immersive theatrical experience in which viewers walk through a space filled with lighting, sound, objects and video from nine artists:
Anna Betbeze
, Jesse Fleming, Luis Flores,
Deana Lawson
, Keaton Macon,
K.r.m. Mooney
, Litia Perta,
Barb Smith
, and Dorian Wood. “The exhibition is about change, and blissful, transformative, changing modes,” says Gimbrone.
After the Orlando shooting, Cohen and Gimbrone felt it was important to create another altar, just outside of the space, including photos of the victims with their names and ages, with space for flowers and donations. Interestingly, visitors began to experience the exhibition as if it, too, were a response to the tragedy, Gimbrone says. “With the light and sound, the exhibition resembles a club atmosphere, so I think people made a visceral connection between the two,” Gimbrone observes. “And the work”—including the sound of screaming and a moment in which the room goes dark, except for a red light—“is jarring.”
—Liz Logan
Related Stories