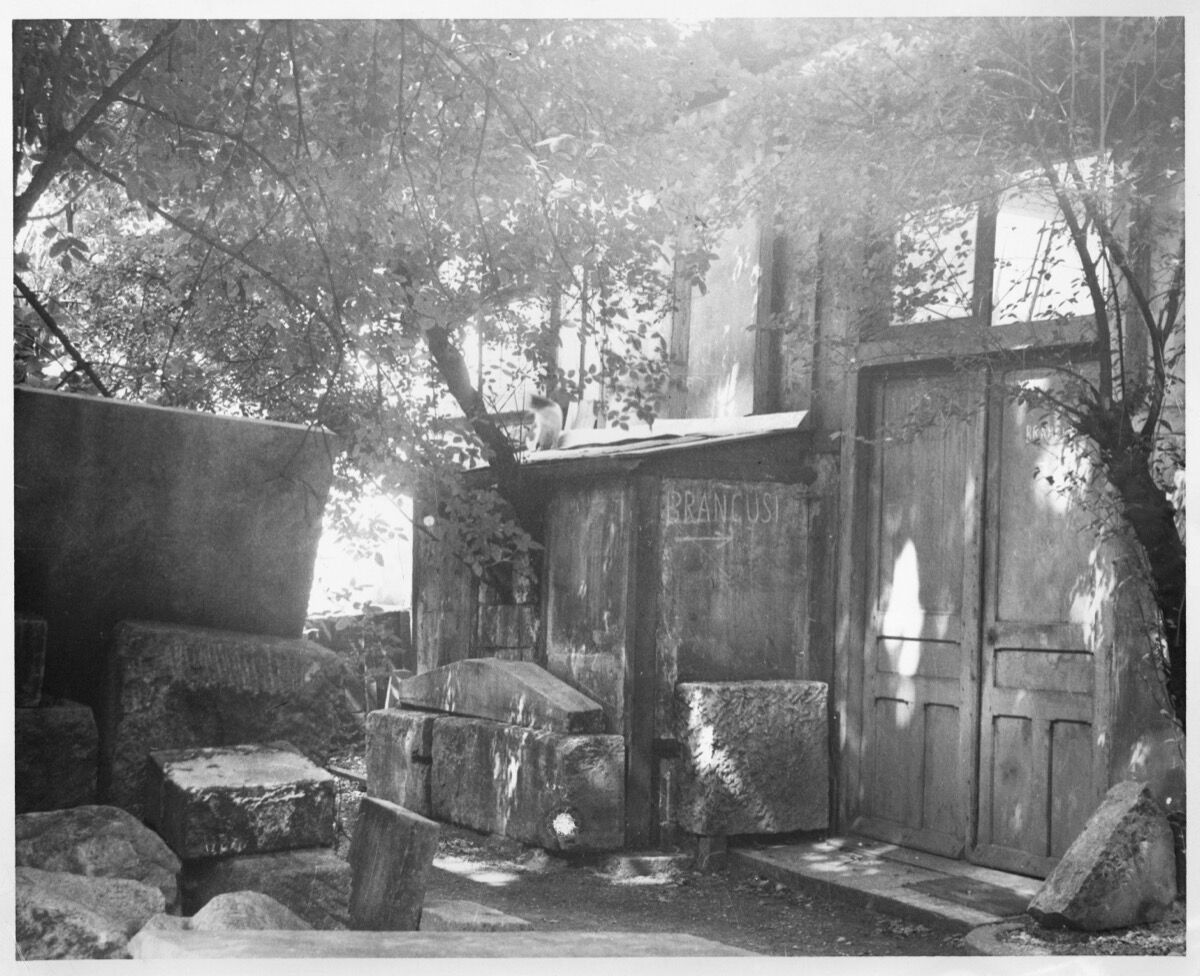 At the turn of the 20th century, artists were drawn to Paris like moths to a flame:
Picasso
moved there from Spain in 1904,
Modigliani
from Italy in 1906,
Diego Rivera
from Mexico in 1909, and
Marc Chagall
from Russia in 1910. But perhaps the most dramatic arrival story is that of
Constantin Brancusi
. He left his native country of Romania in 1904 and walked all the way to Paris, crossing Austria and Germany and nearly dying of pneumonia along the way.
Decades later, Brancusi’s Parisian studio would become a destination in its own right. Tucked away on an alley in Montparnasse known as the Impasse Ronsin, the sculptor’s atelier became the heart of a vibrant community of French post-war artists that included
Yves Klein
,
Max Ernst
,
Jean Tinguely
, and
Niki de Saint Phalle
. If anyone outside of the art world had heard of the alleyway, it was because of the salacious stories: Marguerite Steinheil, mistress to a number of prominent men (including French president Félix Faure, who died in her arms in 1899), once held an apartment there. But most people hadn’t a clue about the Impasse Ronsin. “It really was an extraordinary community, this hidden artistic world in the middle of modern Paris but still guarded like a well-kept secret,” wrote Swiss artist
Daniel Spoerri
. His essay will appear in the forthcoming catalogue for a show at Paul Kasmin Gallery, centered around the Impasse Ronsin’s artistic output. 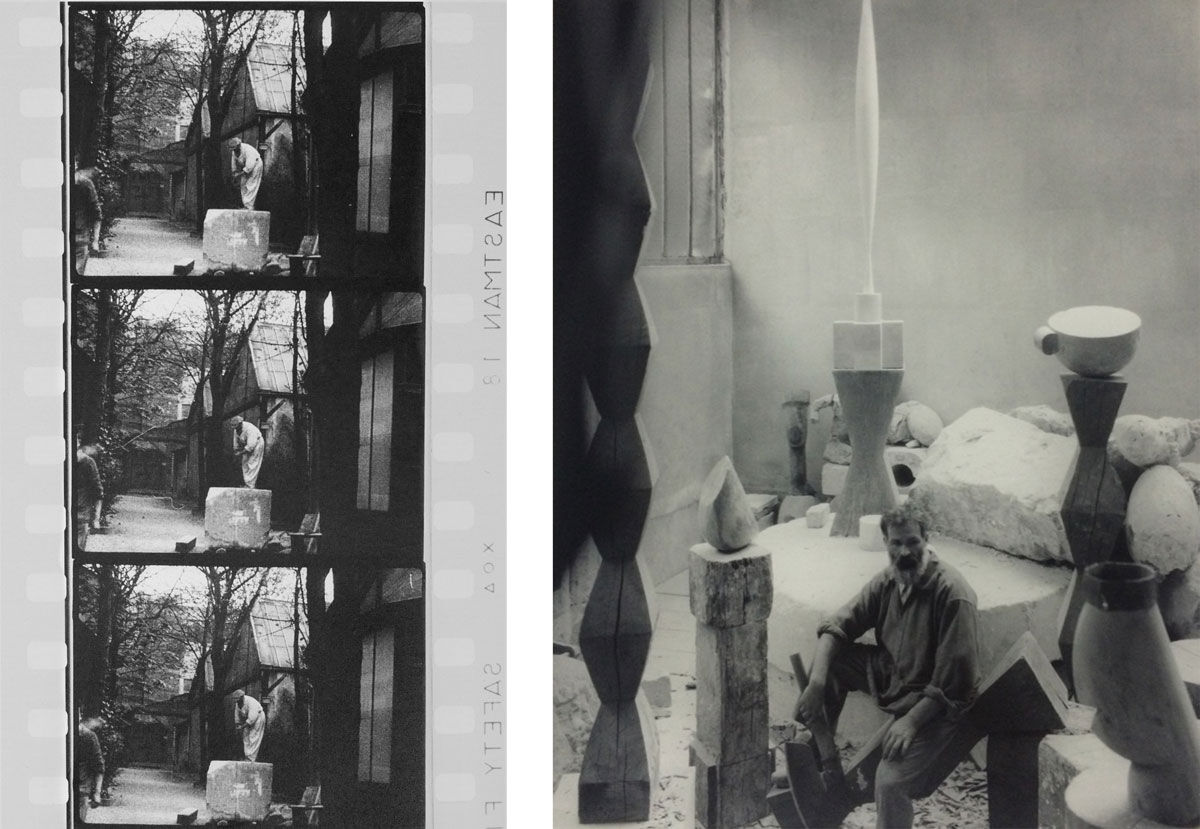 Brancusi moved to No. 8 Impasse Ronsin in 1916. It was there that he began to craft his pared-down forms out of stone, metal, and wood, then polish them until they gleamed. This fascination with materials was reflected in the boulders and blocks of stone he left scattered about his studio, which served as props for displaying work. They gave the space the feel of a quarry—until the floor gave out under their weight, forcing Brancusi to relocate to No. 11 in 1927. That studio expanded slowly over the years, eventually growing to encompass four additional spaces where Brancusi both lived and worked.
Enticed by dirt-cheap rents and stand-alone workshop spaces, artists had been living on the Impasse Ronsin since the 1910s. But a new group began to settle there in the 1950s and early ’60s. The proximity of these artists would engender both artistic and personal relationships: couple
Claude
and
François-Xavier Lalanne
lived next door to Brancusi’s studio, and the trio would drink vodka and smoke Sobranie cigarettes together in the evenings. Until their divorce,
Tinguely and Eva Aeppli
slept on a mattress on the floor of a second-story apartment there, without heat or running water. Niki de Saint Phalle fired a gun at her first canvas in a studio there in 1961, aided by Tinguely, Klein, and art critic Pierre Restany; three years earlier, Klein and Tinguely had collaborated on their own project, an enormous moving sculpture entitled Excavatrice de l’Espace (1958). 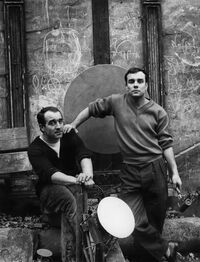 6 Images
View Slideshow
Advertisement
By this time, Brancusi was an elderly man. Claude Lalanne remembered a certain point at which the Romanian could no longer lift his tools, instead devising a pulley system to do it for him. Spoerri, who didn’t live on Impasse Ronsin, but visited often, recalled him shuffling around, bent over and using a stick. “He kept his head down as he went along the path to his studio and never looked particularly friendly,” he noted. But his studio still served as a gathering place: “He would invite us to visit his atelier, and it was so beautiful, with the light coming from a certain angle to make this wonderful shape,” Lalanne recalled. “He would have visitors, collectors, not least Teeny Duchamp, who would bring people through the see the studio. A lot of Americans would come to visit Brancusi, one would see them arriving in the Impasse to pay homage to him and buy sculpture from him at the studio.” 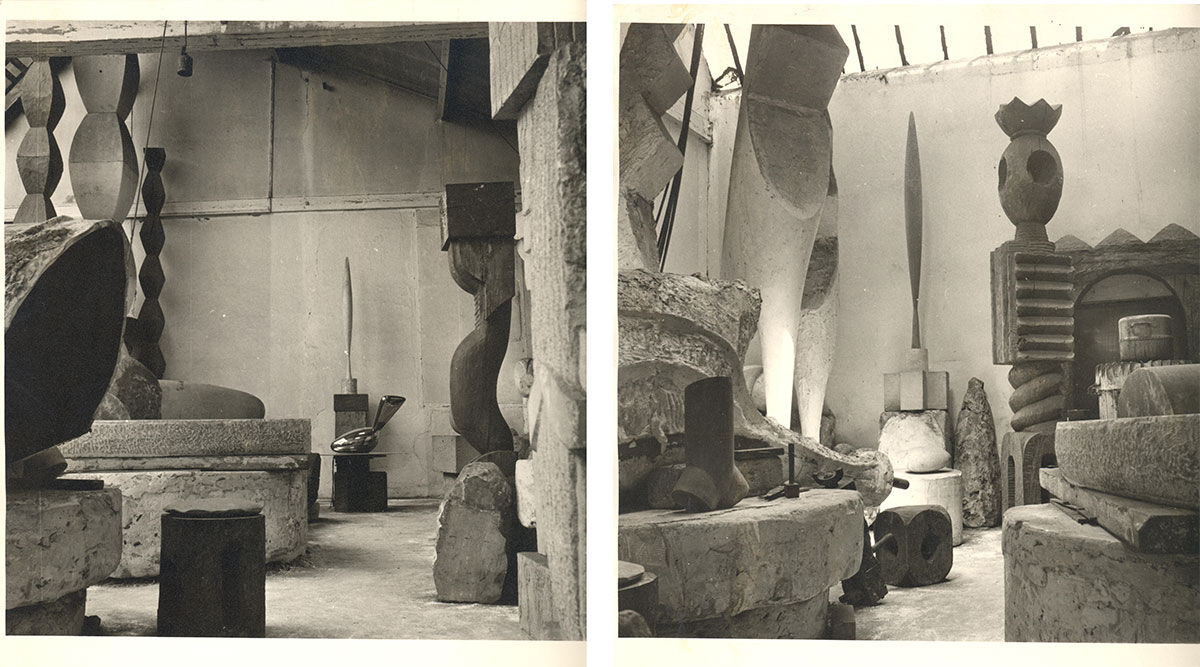 As time went on, however, Brancusi became less and less willing to part with his work. By the 1950s, he had stopped making work (his last sculpture, a plaster cast of the Grand Coq, was completed in 1949). Instead, he spent his days rearranging his sculptures in his studio. Their placement became so integral to him that when he sold a work, he would replace it with a plaster cast so as not to upset the harmony he created within the studio. Brancusi’s attention to the space also extended beyond his artwork. He hand-crafted all the furniture (even his stove), and he displayed his tools prominently on the wall.
Unsurprisingly, Brancusi was concerned about preserving his studio, which had become in many ways his final work of art. At the end of his life, the sculptor made a deal with the landlords and the French government that his atelier be preserved in its entirety. It now lives outside the Centre Georges Pompidou, in a
Renzo Piano
-designed enclosure that opened in 1997. He also promised the other artists that lived on Impasse Ronsin that they would be allowed to remain there after his death—a promise he wasn’t able to keep. “He thought the Ville de Paris would make an enclave with all the old studios, but it was not made clear in his will that they would have to stay,” Lalanne noted. “So of course after he died they just moved it elsewhere.”

But even after the studio was gone, it still loomed large in the artistic imagination. It so inspired Brancusi’s student Isamu Noguchi that the young American sculptor and designer created his own version south of Paris in 1927—a space that has been replicated in part by the Noguchi Museum for the current Paul Kasmin show. In the show’s catalogue, French conceptual artist
Bernar Venet
recalls learning about Brancusi’s studio in 1964. He immediately became captivated with the idea of visiting the site. “Despite a persistent and solid rain,” he wrote, “I wandered through that short Impasse with a single idea in my head, to find, abandoned somewhere, a piece of white marble that might have somehow escaped from Brancusi’s studio.”
Abigail Cain
Related Stories