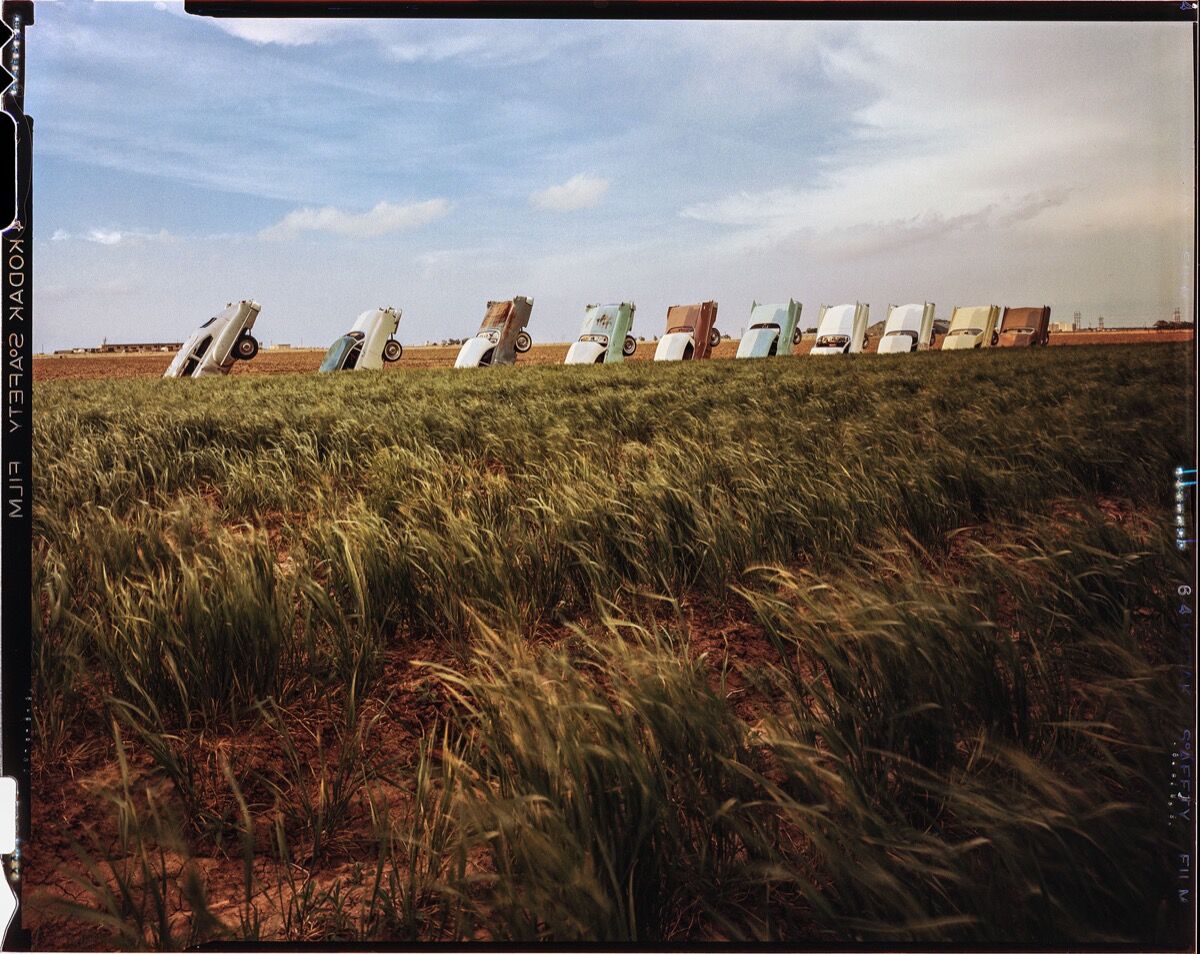 It’s 9:30 a.m. on a Tuesday, and already there are some 40-odd people gathered in a Texas cow pasture to gawk at the 10 Cadillacs buried nose-down in hard-packed dirt. After decades in the ground, the cars are missing their windows; several have even lost their doors. Graffitied countless times, they sport motley, even garish, coats of neon spray paint. There is no plaque, no explanation of why these vehicles have been preserved in such a way—but the tourists come in droves anyway.
No one, least of all its creators, thought that the 1974 art installation they titled Cadillac Ranch would become the roadside attraction it is today. “So far, it has outlived two of the participants,” artist Chip Lord said. “It’s probably going to outlive all of us. We didn’t expect that in the slightest.”
They say everything is bigger in Texas, and the story of Cadillac Ranch includes at least one Texas-sized personality. Stanley Marsh 3 (who preferred the 3 to III—he thought Roman numerals after one’s name was pretentious) was an eccentric Amarillo millionaire with a penchant for show-stopping art. His commissioned projects in and around his hometown included Floating Mesa (1980), which employed a string of metallic screens to make it appear as though the top of a hill was drifting away, and World’s Largest Phantom Soft Pool Table, a huge swatch of grass dyed bright green and paired with a 100-foot-long cue stick and several enormous billiard balls. He opened his home (which everyone called Toad Hall) to several major artists of the day, including
John Chamberlain
and
Robert Smithson
. 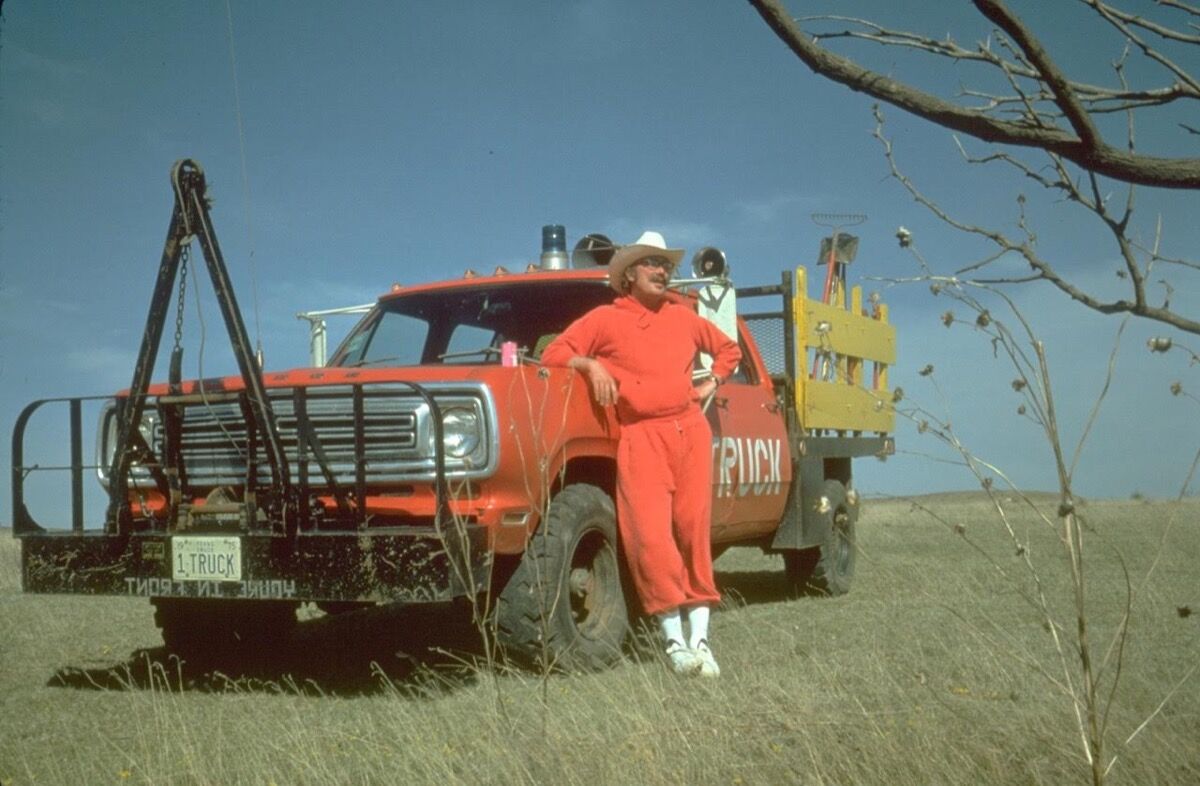 On the West Coast, meanwhile, architecture collective
Ant Farm
was experimenting with similarly irreverent projects. Founded in 1968, their early works consisted of lightweight inflatable structures that challenged the primacy of
Brutalism
; they published a DIY guide to these blow-up creations called the Inflatocookbook in 1971. Although the group was based in San Francisco, they made their Texas debut when they built a country home for two wealthy Houstonians—a playful, avant-garde structure they called “The House of the Century,” which earned them a Progressive Architecture Design Award in 1973.
As Ant Farm member Hudson Marquez tells it, he first wrote Marsh asking for funding for a documentary project. Although Marsh politely declined Marquez’s initial request, he said he would be open to a proposal for an Amarillo-based project. The artist threw out an idea—what if they printed fake seed packets with illustrations of cars coming up out of the ground, instead of carnations or cucumbers? “’49 Fords: Guaranteed High Yields,” they might read. Then these packets would be placed in with the real ones. “The whole idea was to get someone to look through and ask the feedstore guy, ‘What in tarnation is this?’” Marquez recalled. “And Stanley said, ‘That’s a fine idea. But why don’t we just do that for real?’ I said, ‘Grow cars? You mean like a Cadillac ranch? And Stanley said, ‘That’s it!’”
Lord remembers the interaction differently. He said the collective was first put in touch with Marsh by a mutual friend from Albuquerque. On the drive back to San Francisco after completing their commission in Houston, he and Ant Farm member Doug Michels (now deceased) stopped by to see Marsh at Toad Hall. In Lord’s telling, the final proposal was inspired by a print advertisement for the 1959 Cadillac. Both Lord and Marquez agree, however, that the correspondence with Marsh was a form of artistic expression in of itself. The Amarillo businessman wrote all his letters with a special, large-font typewriter on oversized stationary that required additional postage. In a missive dated March 8, 1974, he responded to Ant Farm’s proposal with tentative interest: “It’s going to take me awhile to get used to the idea of the Cadillac Ranch. I’ll answer you by April Fool’s Day. It’s such an irrelevant and silly proposition that I want to give it all my time and attention so I can make a casual judgment of it.”

Advertisement
Marsh did finally agree to the project, and in the summer of 1974 Ant Farm arrived in Amarillo. The bulk of their time in the city was spent tracking down the series of used cars that would eventually be buried along Route 66 (now Interstate 40). Marsh granted them a budget of $3,000 to purchase 10 models spanning the years between 1949 and 1964. Together, the cars offered a time-lapse view of the evolution of the Cadillac tailfin. The trio scoured the Texas Panhandle for several weeks, visiting junkyards and answering for-sale ads. The 1957 Sedan DeVille was particularly difficult to track down; in fact, Lord said they started burying the other cars before they found one, leaving a space for it to eventually be slotted in.
“The Cadillac tailfin changed from year to year, and each year the old one went out of style,” Marquez explained. “People would say: ‘’56 tailfin, damn, it’s different, better get a new one! ’57—whoa, that’s really different, better get a new one.’ It was a consumer culture of planned obsolescence. Since Cadillac was the top of the line, they proudly proclaimed themselves to be the best car in the world,” he continued. “That was total horseshit, of course, but most Americans just bought that hook, line, and sinker. So that’s what Cadillac Ranch is about. And it’s a goof on Texas too, the mythical Texas oilman who dumps his Cadillac when the ashtray gets full.” 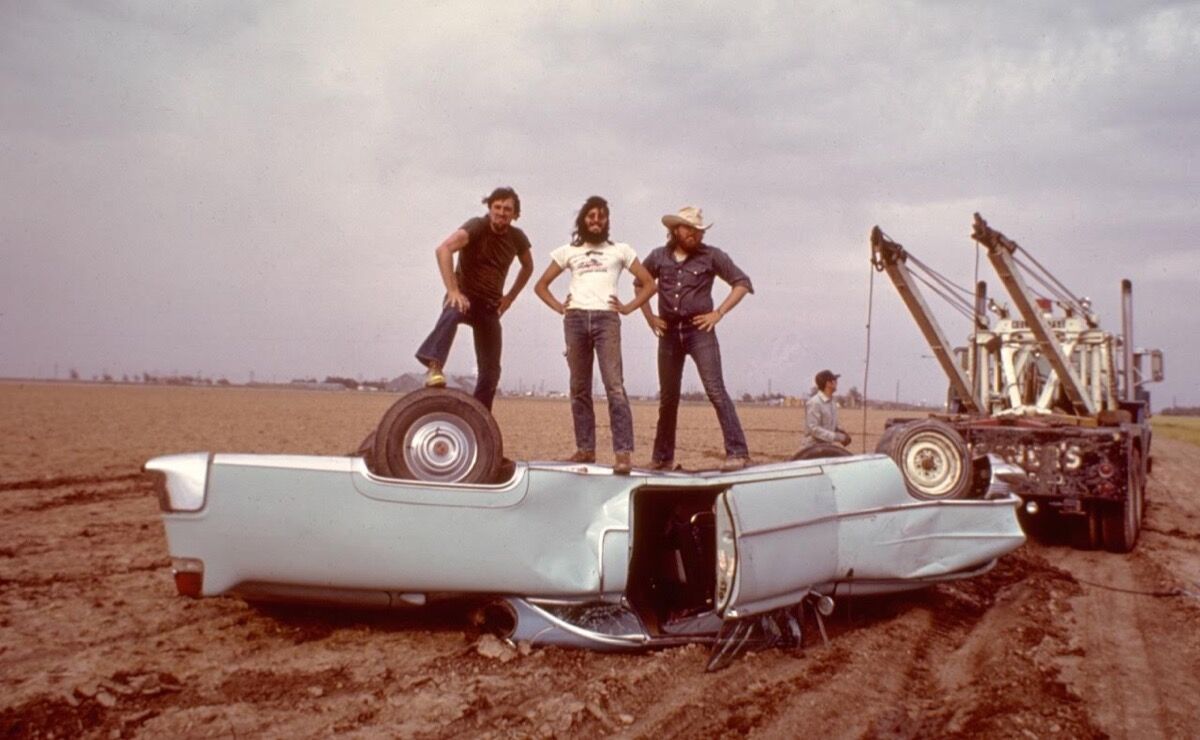 On June 21, 1974, Marsh threw an opening party for the completed installation; Amarillo native Wyatt McSpadden attended as Toad Hall’s in-house photographer. “The people who were invited were the people who knew Stanley, so they were accustomed to a certain amount of zaniness—because he was always zany,” McSpadden remembered. “It was well-received, as far as I recall. Everybody got drunk. They had a huge bowl of shrimp that was iced down, and the wind was blowing, and it was so dirty that it turned to mud in the bowl. That’s just what happens when you throw a party in a pasture.” Strangers passing by on the interstate also stopped, got out, and joined the celebration. The daughter of the owner of the local Cadillac dealership dropped by, laying a plastic flower at the foot of each buried car as if they were automotive gravestones.
When they were first planted, the Cadillacs wore their original pastel-colored paint jobs. But it didn’t take long for graffiti artists to get wind of the project and add their own signatures. For years, Marsh would periodically send people out with compressor sprayers to repaint the cars. McSpadden, now an Austin-based photographer who has returned to Cadillac Ranch on assignment a number of times, remembers them painted red, grey, and black at various points. “But they would always become graffitied again,” he said. “So you can go out there to the cars and peel layers of paint off. Not the original car paint, that’s at the base, but many other layers of paint. It’s like a sort of archeology.”

Originally, Amarillo natives didn’t know quite what to think of Cadillac Ranch. They didn’t much like Marsh—a liberal Democrat who would “say anything,” as McSpadden put it—and so they weren’t quite sure if they liked the art he commissioned, either. But time passed, and slowly the sculpture became one of the town’s most beloved landmarks. Paradoxically, a work meant to poke fun at America’s mass media and culture has been subsumed, in many ways, by the very thing it meant to critique. It’s appeared as the backdrop of a number of advertising campaigns, and Bruce Springsteen even wrote a song inspired by the site.
The installation has achieved an almost mythical status in the decades since it was first constructed, described as a “Pop-Art Stonehenge.” And as its fame grew, stories were embroidered to it—like the claim that the cars were angled to match the sides of the Great Pyramid of Giza. “I think that’s something Stanley liked to tell people, and he repeated it enough times that it ended up in print,” Lord laughed. “I don’t think there’s any basis in fact. It wasn’t calculated as a specific angle—it was more of an aesthetic sense. The cars just had to be leaning and heading west.”
Abigail Cain
Related Stories