How CHART Is Helping Art Reach a Wider Community, Both in Denmark and Beyond 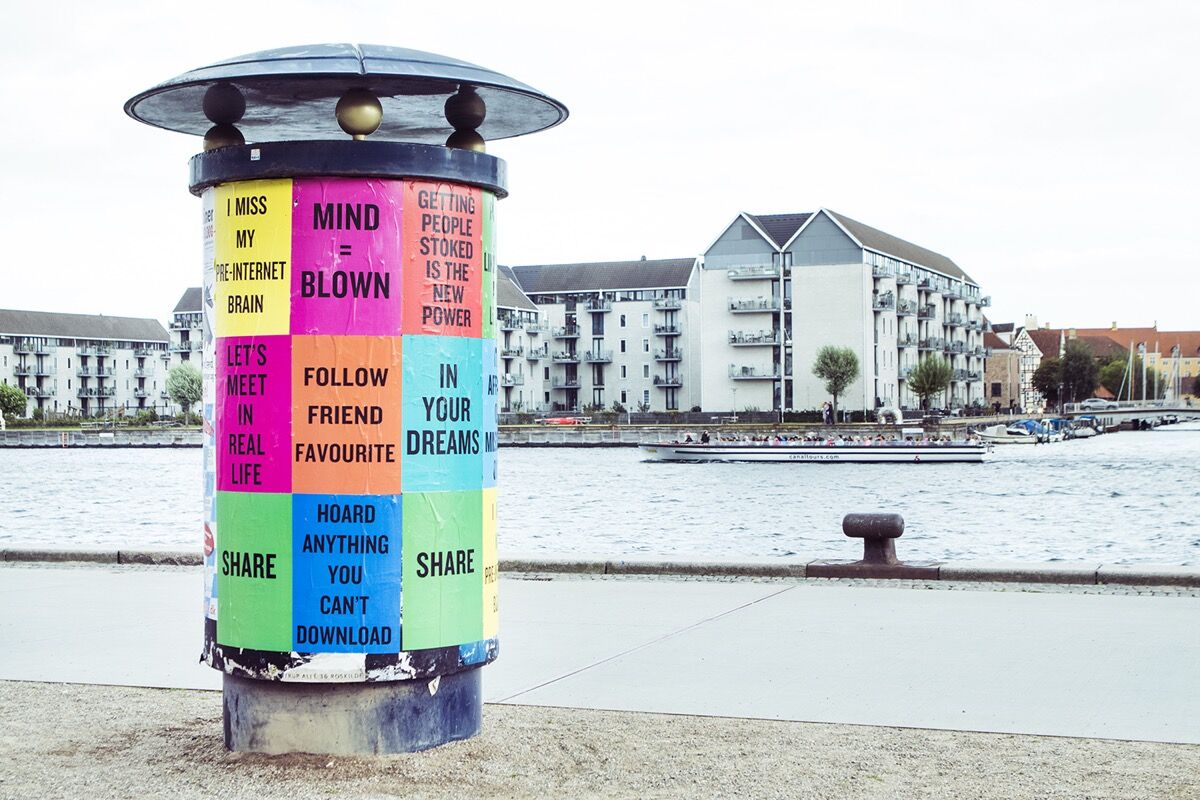 View of Doug Coupland’s “Slogans of the 21st Century,” at CHART, 2016. Photo courtesy of I DO ART Agency for CHART.

At around 11:45 on Friday evening in Copenhagen, Canadian performance artist and musician Peaches took the stage in the baroque courtyard of the palatial Kunsthal Charlottenborg. The headliner of the all-female lineup that performed at the opening fête of CHART, an event that was open to the public, she crooned to an audience of some 8,900 fans. Enlivened by their screams, she sprayed champagne before crowd-surfing in a sea of Danish youth.
It wasn’t your average start to an art fair, which also saw DJ sets by Copenhagen-based artists
Rose Eken
and
Anika Lori
, all set in the LED glow of a giant inflatable pavilion designed by beloved Danish architect Bjarke Ingels. But it’s this accessible programming and public engagement that has come to be expected at CHART, a contemporary Nordic art fair that’s helping art reach a wider community—both at home and abroad—by fostering a new generation of young collectors and broadening the purview of those already in the game.
“If even 10 percent of those people come into the fair, that’s fantastic,” David Risley said of the opening crowd. Risley is owner of one of the five Danish galleries that established CHART in 2013 in an effort to push the Nordic art scene forward. (The dealer admits that his own entryway into art was through music, by way of a
Warhol
-designed Velvet Underground album cover.) This year, the four-year-old fair brought 28 Nordic galleries, plus two others with roots in the region, to the historic Kunsthal, a landmark flanked by a picturesque canal lined with sailboats and sherbet-colored townhomes. CHART even spurred a new international fair taking place concurrently across town, Code, launched by the 20-year-old fair Art Copenhagen.
A city of over one million people, Copenhagen is swarming with artists and dotted with upwards of 20 institutions—the sprawling Louisiana Museum of Modern Art being its crown jewel—plus a thriving gallery scene in its Meatpacking District. But despite this, the collector base still has much room to grow. “The market here is very small,” said CHART director Simon Friese, beneath the canopy of Ingels’s pavilion. “There is a great group that buys very expensive art, but there is a large, large, group of collectors that buy under the limit of a million kroner, [about $150,000].” Many among this latter group of collectors, which emerged in Copenhagen over the past five years, fall between the ages of 25 and 40.
Friese added that although local collectors may have the funds and interest in investing in art, they’re often too intimidated to enter a gallery. “It’s a bit the same as if I’m going into a very expensive Yves Saint Laurent shop,” he joked. “A lot of people feel this way within a gallery, and we’re trying to change that.” To counter this intimidation factor, the fair aims to encourage new collectors—Nordic and international alike—by engaging them through its intimate and alternative format. Spread across under 20 rooms of the Kunsthal without delineated booth walls, similar to the New York and Brussels fair Independent, CHART feels more like walking through an exhibition than an art fair. Dealers are happy to take the time to chat with collectors—even to walk them over to meet neighboring gallerists. “You need to introduce these people to art, and to tell them the stories behind the pieces,” said Friese. 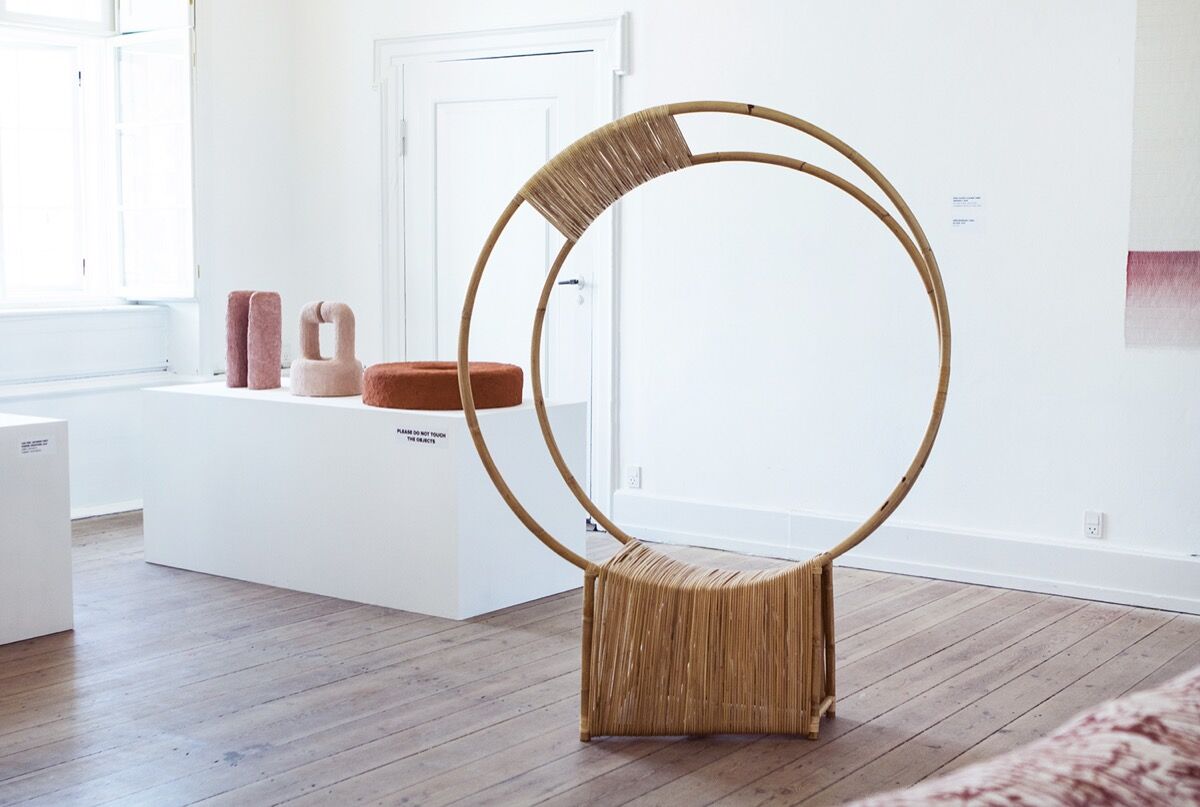 Installation view of Curio at CHART, 2016. Photo courtesy of I DO ART Agency for CHART.

In its bid to make art more accessible, the fair has also tapped into Danish collectors through an entry point they know well: design. “We have a big design culture; Danes are used to looking at shapes,” said Morten Korsgaard, a partner at Galleri Bo Bjerggaard. This year, the fair introduced a new sector that brought together six leading Nordic design galleries, and beneath its umbrella, a curio that corralled work by seven up-and-coming Danish designers. According to many art dealers, the average Danish family is accustomed to spending money on design. While the sector’s inclusion in the fair is an exciting platform for design, it could also help build a bridge to collecting art.
But for the established collectors, those that spilled into the Kunsthal on opening day and the majority of whom stuck around for every occasion through the weekend, it is the opportunity for discovery—be it new galleries or artists—that brings them back to CHART year after year. Two hours into the VIP preview, I found Brussels-based collector Alain Servais thumbing through a small red notebook scrawled with names he would no doubt diligently look into post fair. “What mostly attracts me is the opportunity to discover new galleries,” he said. While Servais enjoys visiting the home turf of the Danish galleries he sees on the international fair circuit, Nicolai Wallner and Nils Stærk among them, the regional fair’s greatest draw is a chance to discover those that are not traveling to major capitals. “It gives you an idea of the depth of the market,” Servais explained. “There is good art everywhere.” 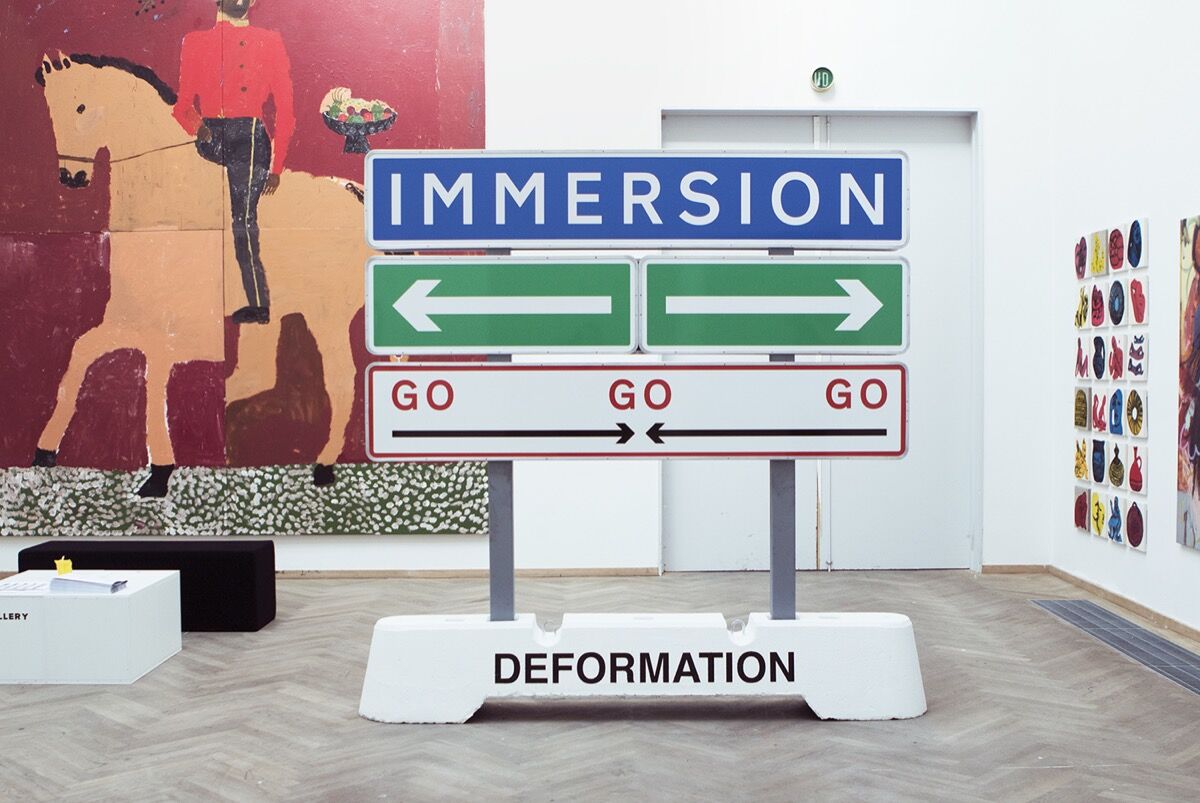 Installation view of V1 Gallery’s booth at CHART, 2016. Photo courtesy of I DO ART Agency for CHART.

Advertisement
We were interrupted by the cries of septuagenarian Japanese performance artist Tatsumi Orimoto, who marched up with four baguettes strapped to his head, trailed by an entourage sporting bread-wear in similar fashion. Under the guise of his notorious alter ego “Bread Man” (first performed in Ginza, Tokyo in 1991), Orimoto climbed onto a patio chair and shouted at his followers to fill the seats around us. I caught an earlier performance where Orimoto called out for a beer while his team offered up tears made of bread to the crowd. While enjoying the snack, Canadian author and artist
Douglas Coupland
—whose “Slogans for the 21st Century” series was plastered across the buses, subways, and balconies of Copenhagen through the duration of the fair—gave me his unsurprisingly witty theories about the work’s meaning.
Across the courtyard, Oslo-based collector Rolf Hoff emphasized the importance of putting the Nordic countries—and its artists—on the map. Though CHART’s galleries show artists from all over the world, and Hoff and his wife Venke’s renowned collection KaviarFactory is itself very international, for Hoff, the greatest draw of a regional fair is the opportunity to support the region’s artists. “The best way to support your artists is to buy them,” he noted, and explained that for new collectors who would normally be inclined to buy the works of the big-name international artists they see in the news, CHART is a way of educating them about contemporary Nordic artists. (Despite this, not even Hoff could ignore a highway-sign sculpture by Canadian-born, L.A.-based artist
Cali Thornhill Dewitt
at V1 gallery—but based on the collectors crowding around the work, and a report that it found a new home in a Danish collector’s sculpture garden, few would blame him.) 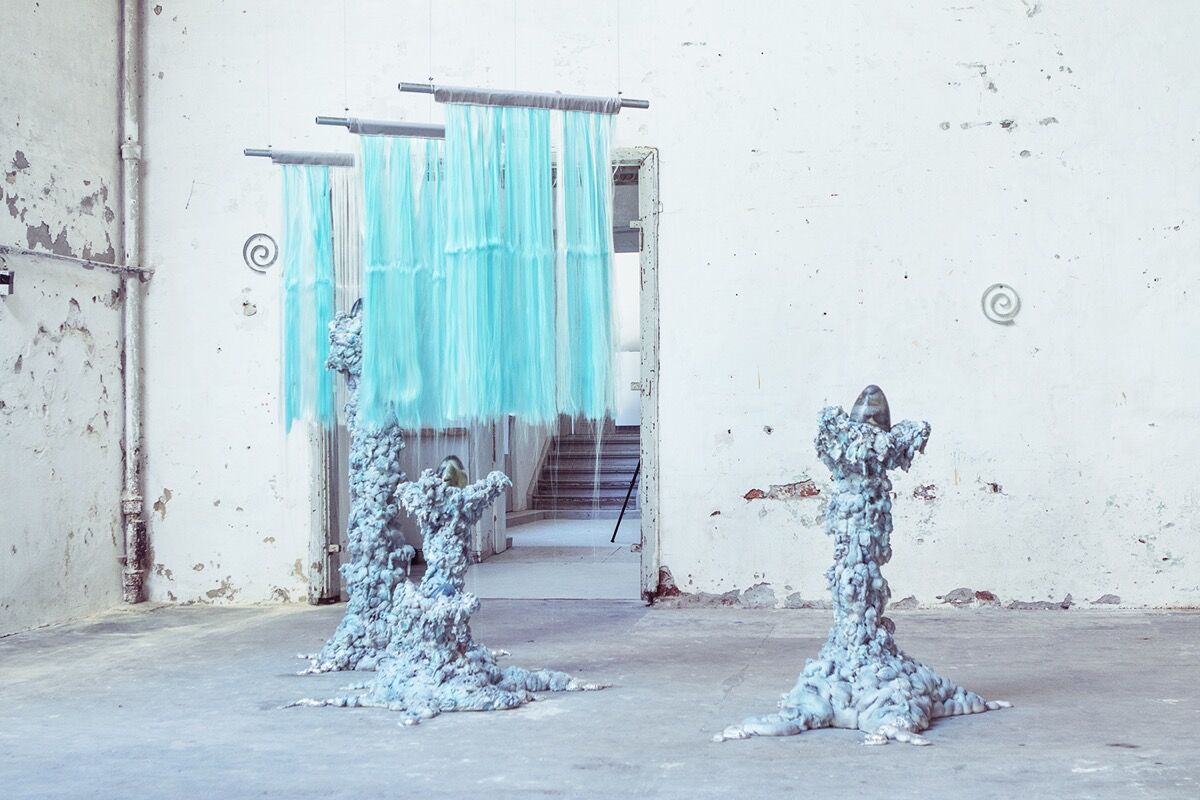 Installation view of Emilie Astrup’s work on view in “Curves of the World” at CHART, 2016. Photo courtesy of I DO ART Agency for CHART.

That evening, artists, collectors, and dealers gathered in the Kunsthal’s sculpture garden for “art d’oeuvres,” part of CHART’s excellent emerging art exhibition “The Curves of the World.” Organized by Danish curator Mette Woller, the show is inspired by sci-fi cyberpunk; the best of the bunch, by 26-year-old Danish artist Emilie Alstrup, sees globular sculptures birthing Jello eggs, inspired by the sexual fetish for being impregnated by an alien. I couldn’t help recall this as the artist’s tray of small, glitter-filled, Jello eyeball mints were passed around for consumption.
I dared to take one, as did Helsinki gallerist Kaj Forsblom, as we struck up a conversation around the momentum of the Nordic art scene. It’s a fitting topic following last week’s news that his gallery will merge with Stockholm-based Lars Bohman Gallery. The strategic move positions artists from each gallery to gain greater exposure through being shown in the other gallery’s country, and will no doubt make the pair a dominant force in Scandinavia come January 2017. Similarly at CHART, Forsblom sought to draw international eyes to the work of Finnish artist
Susanne Gottberg
, who he’s shown since 1989. Though her shows in Finland regularly sell out, here, Forsblom pairs Gottberg’s paintings with works by Swiss artist
Not Vital
to ultimately, he says, elevate her work to an international level.
“In previous years, galleries always had to go somewhere else to go to art fairs,” said Jesper Elg, director and co-founder of the Copenhagen gallery V1, as well as one of CHART’s co-founders. “Now people are paying attention, and we can invite them back home.” This shift was especially apparent this year, as dealers noted an increase in international collectors and the fair reported first-time visitors from countries including Ecuador, China, South Korea, and Russia, among others. V1, fresh off its opening of a new space in the city last week, placed works with American and Canadian collectors, among them, three of five works on paper by Los Angeles-based artist
Wes Lang
which were scooped up for $25,000 apiece. But it was a Dutch collector who bought the fair’s largest work, a showstopping painting by British artist
Danny Fox
(Temple, 2016) for $68,000.
Elg wasn’t alone, as dealers saw consistent sales throughout the weekend, including a number of six-figure sales on opening day. Fellow CHART co-founder Bo Bjerggaard sold one of the fair’s most expensive works,
Georg Baselitz
’s Shepherd (Remix) (2008), for 2.9 million DKK (approximately $435,900) and placed Danish artist
Per Kirkeby
’s Winterbaum III (1985) with a Danish collector for €140,000. And sales extended to the Copenhagen gallery’s current show of influential Scandinavia-based artists
Mamma Andersson
and
Tal R
, the result of the pair’s collaboration over the past year, which also goes on view at Galleri Magnus Karlsson in Stockholm. 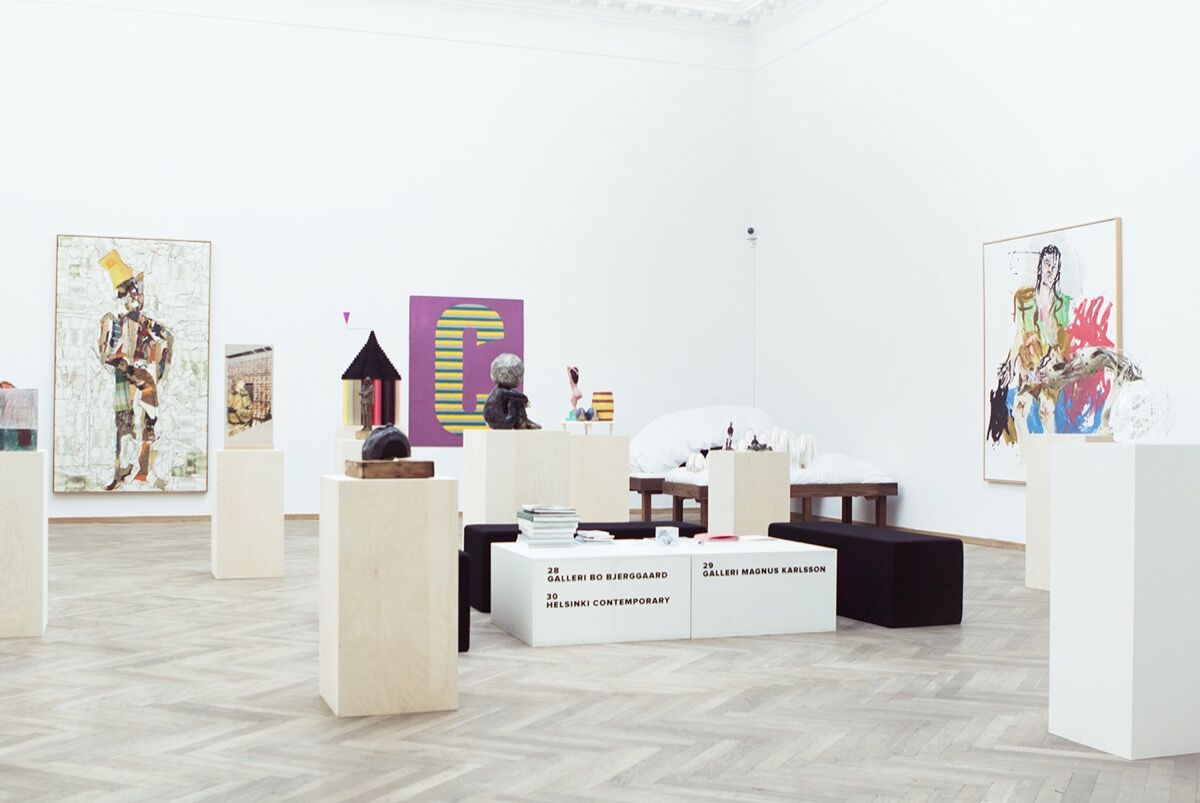 Installation view of Galleri Bo Bjerggaard’s booth at CHART, 2016. Photo courtesy of I DO ART Agency for CHART.

Also coinciding with the fair was the opening of the city’s newest museum, Copenhagen Contemporary, which launched with a stunning video installation by Icelandic artist
Ragnar Kjartansson
, among other powerful works. At the fair, Reykjavik’s i8 Gallery showed a group of works by Kjartansson, including watercolors that sold for $8,000 a pop—just one example of galleries seen across the fair showing works at a price point that’s accessible to the city’s emerging base of younger collectors. (On the slightly higher end, they sold a sculpture by
Alicja Kwade
for €26,000.) One of the two non-Nordic galleries present, Croy Nielsen, also found success in this lower price range, and saw a positive response to bringing Danish artists
Nina Beier
and
Marie Lund
to their home soil. “Neither have representation in Denmark,” said Henrikke Nielsen, who is Danish herself, of the impetus to show at CHART. By Saturday afternoon, she’d sold Beier’s work to both a public and private collection in Denmark priced at €6,000, and some of Lund’s hammered and warped brass plate sculptures, priced at €7,500 each.
On the eve of his departure back to Helsinki, Forsblom shared an anecdote about a major unnamed dealer who once told him, some two decades ago, that contemporary art stops at Copenhagen. But there we stood, amongst artists, gallerists, curators, and collectors from around the world, including many who have been instrumental in building the strong art scene that led to CHART’s first iteration just three years ago. “CHART has great potential to change the art-world understanding of the Nordic region,” he told me. It’s an admirable mandate for an art fair—and one that CHART, as a proven platform for collectors new and established, Nordic and otherwise, looks poised to fulfill.
Molly Gottschalk is Artsy’s Lead Visuals Editor.
Related Stories

The Future of Art According to Douglas Coupland 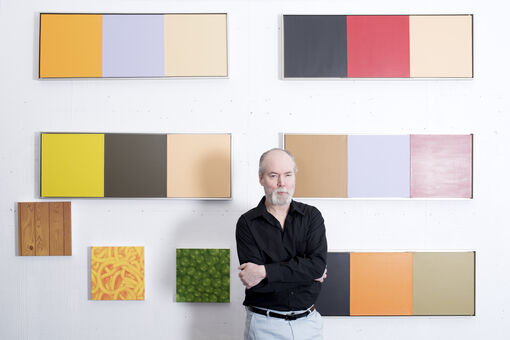 The Future of Art According to Douglas Coupland
Artsy Editors
Mar 1, 2016