How Crowdsourcing Brought an ISIS-Destroyed Museum Back to Life In February of last year, Islamic State militants stormed the Mosul Museum in Iraq with drills and sledgehammers in hand. Once inside, they proceeded to topple statues and pulverize artifacts on display, including an Assyrian lion carved from limestone around 860 BC.
Fourteen months later and 5,800 miles away, that lion was resurrected for an evening in a seventh-floor gallery at the Museum of Art and Design in New York. It wasn’t the only destroyed artifact from the Mosul Museum on display—a first-century Nirgul tablet and a statue of a priest from the ancient Persian city of Hatra were perched on nearby pedestals, fashioned out of what appeared to be gleaming white marble. A closer look, however, revealed thin concentric rings from the 3D-printing process that brought these objects back to life.
These recreations are the work of Rekrei, an organization that uses a process called “photogrammetry” to produce digital 3D models of cultural artifacts from crowd-sourced photographs. The brainchild of Ph.D. students Chance Coughenour and Matthew Vincent (studying in Germany and Spain, respectively), Rekrei was initially intended as a response to the ISIS-led demolition of the Mosul Museum.
“I made the comment to Matthew: Why don’t we try to crowdsource the images and the data from people who had visited the museum previously, use those images to reconstruct the artifacts, and then place them back into a virtual museum at some later date?” Coughenour explains.
It took just two weeks for the pair to get Rekrei online. Although there had been previous efforts to digitally reconstruct single objects—such as the Bamiyan Buddhas, blown up by the Taliban in 2001—Coughenour says Rekrei is the first photogrammetry initiative of this scope. Originally christened Project Mosul, “we quickly realized that the platform we were developing would work for the entire globe,” Vincent says. The project changed its name to Rekrei, which means “recreate” in the international language of Esperanto. “At this point, the idea is that the global community prioritizes the sites or monuments or artifacts for reconstruction. The process is very organic, in the sense that not long after Palmyra was occupied by the Islamic State, all kinds of tourist photos were being uploaded to the site because so many people have been through the city,” Vincent notes.

The destruction of Palmyra, the extent of which was revealed when Syrian troops reclaimed the city in March, focused public attention on the ethics of recreating destroyed cultural artifacts. In a recent Guardian editorial, Jonathan Jones insisted that Palmyra “must not be turned into a fake replica of its former glory.” But Rekrei offers the possibility of another sort of reconstruction: the crowd-sourced museum. Rather than a hollow reproduction, the platform could create a rich, culturally diverse alternative that—while not replacing the original—will allow for new voices to help in curating and understanding these objects.
Since it was founded in March 2015, Rekrei’s website has attracted the attention of some 40,000 unique visitors, who together have uploaded 5,000 images. Using photogrammetry, also dubbed “computer vision,” these different 2D images are combined—much in the same way our eyes do—to create depth. Unlike our eyes, however, this process could involve 50, even 100 images of the same scene to create that third dimension. It’s a process that has been around for over a century, but has only recently been automated by computers. Rekrei boasts a small but dedicated group of online volunteers who sort the image submissions and even aid in the creation of 3D renderings.
So far, Rekrei has more than 40 reconstructions on their website, each of which can be rotated and viewed from any angle. A number of these objects will be utilized in a partnership with the Economist Media Lab, which is in the process of finalizing a virtual-reality version of the Mosul Museum accessible via Google Cardboard.
“For us, that was sort of closing the loop,” Vincent says. “When we launched the project, if we would have imagined what would be the completion, it would be exactly this—a virtual version of the Mosul Museum. At this point in time, the project could shut down and I think we’d feel like we achieved what we had set out to do in the first place.” Advertisement
The initial version of the virtual reality museum was launched at Amsterdam’s International Documentary Film Festival in November. The six-minute experience was accompanied by narration that incorporated Rekrei’s crowd-sourcing ethos, Vincent says, by stringing together a series of voices that told the museum’s story from different perspectives. This multiplicity of views may serve to address criticisms that cultural reconstruction projects could become a sort of “visual colonialism.”
For instance, a recent scaled-down replica of Palmyra’s toppled Arch of Triumph—shaped by robotic arms from a computer-generated 3D image and now touring the globe—has Iranian artist Morehshin Allahyari particularly concerned. “The gesture is so simplistic,” she told Hyperallergic. “This is about histories, about institutional relationships. We have to talk about power structures—how it’s different when westerners or tech companies save cultural things compared to someone else who actually comes from the culture—and how they influence the conversation.”
Vincent and Coughenour hope that the next stage of the project gives those displaced by conflict an active role in the reconstruction of their heritage. Users will be given the tools to curate a personal collection on the Rekrei site, displayed in an online gallery accessible via a virtual reality platform.
“At the end of the day, this is what we want to be able to do,” Vincent says, “to preserve the memory of this lost heritage by providing the opportunity for people to tell their own stories.”
Abigail Cain
Related Stories

An Iranian Artist Is Using 3D Printing to Combat ISIS 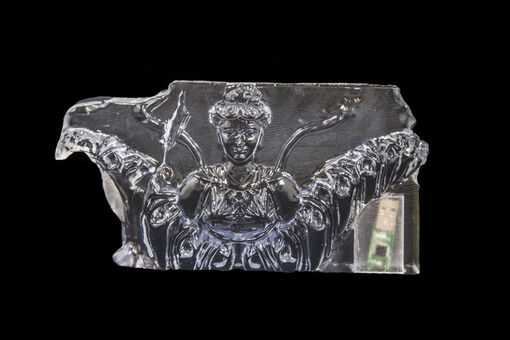