Artsy Editors
Apr 20, 2016 9:25pm
No one’s going to let you into the art world. This is a reality that
Kerry James Marshall
, one of America’s most esteemed painters, whose numerous accolades will be burnished this year with a major retrospective, knows well. “You can wait for somebody to let you get in the door,” he says, “or you can assume your place among equals and put yourself in the world too, and put yourself in the stories that you want to see told.”
Marshall’s large-scale, colorful paintings of dignified, hyper-black figures depicted in commonplace settings—a barber shop, a backyard party, or the housing projects in Chicago’s South Side, where he has lived and worked in the Bronzeville neighborhood since 1987—place ordinary figures in the world, too. And that generosity extends to Marshall’s persona in the real world. “He’s the kind of person that will engage with someone no matter who you are in the world,” says the artist and art historian
Raél Salley
of his close friend Marshall. “And that kind of openness requires a certain disposition—a certain kind of orientation to the universe—that this is a friendly universe.” 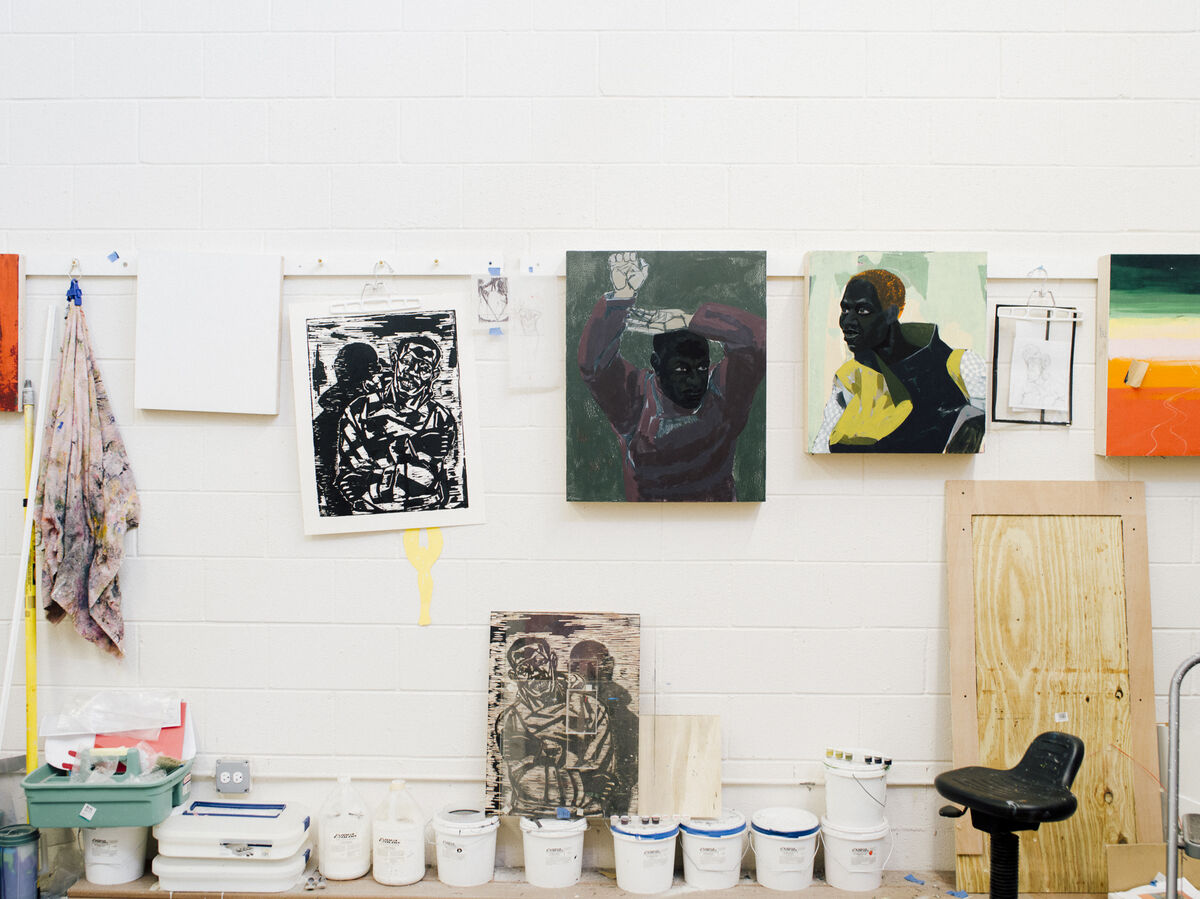 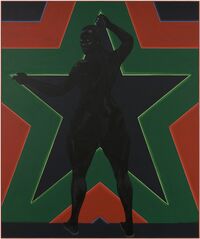 5 Images
View Slideshow
Yet to characterize Marshall as a poster child for African-American art is a disservice to the project of someone who has plumbed the depths of blackness and beauty, a long-neglected artistic subject, using the tools of
Old Master painting
, for nearly 40 years. “You don’t have much of a history of black people trying to represent themselves as an ideal, or representing themselves with a kind of ordinary grace,” he says, “where a person isn’t standing in for some sort of political symbol, but is simply elegant because they’re there. And still it’s a beautiful picture and that’s all it is.”
Marshall’s paintings of superblack figures, which hang alongside Old Masters in museum collections across the U.S., do just that. They command their environments with a calm gravitas, but also an iconoclastic quality: audiences may not be used to feeling a sense of awe in front of pictures of people with this skin tone, this blacker-than-black countenance. “He’s making us face our racial prejudice,” says artist
Hank Willis Thomas
, who claims Marshall as a major influence on his practice, “and daring us to look at these black figures and see them as not beautiful, not having originality and complexity. He’s calling our bluff.” 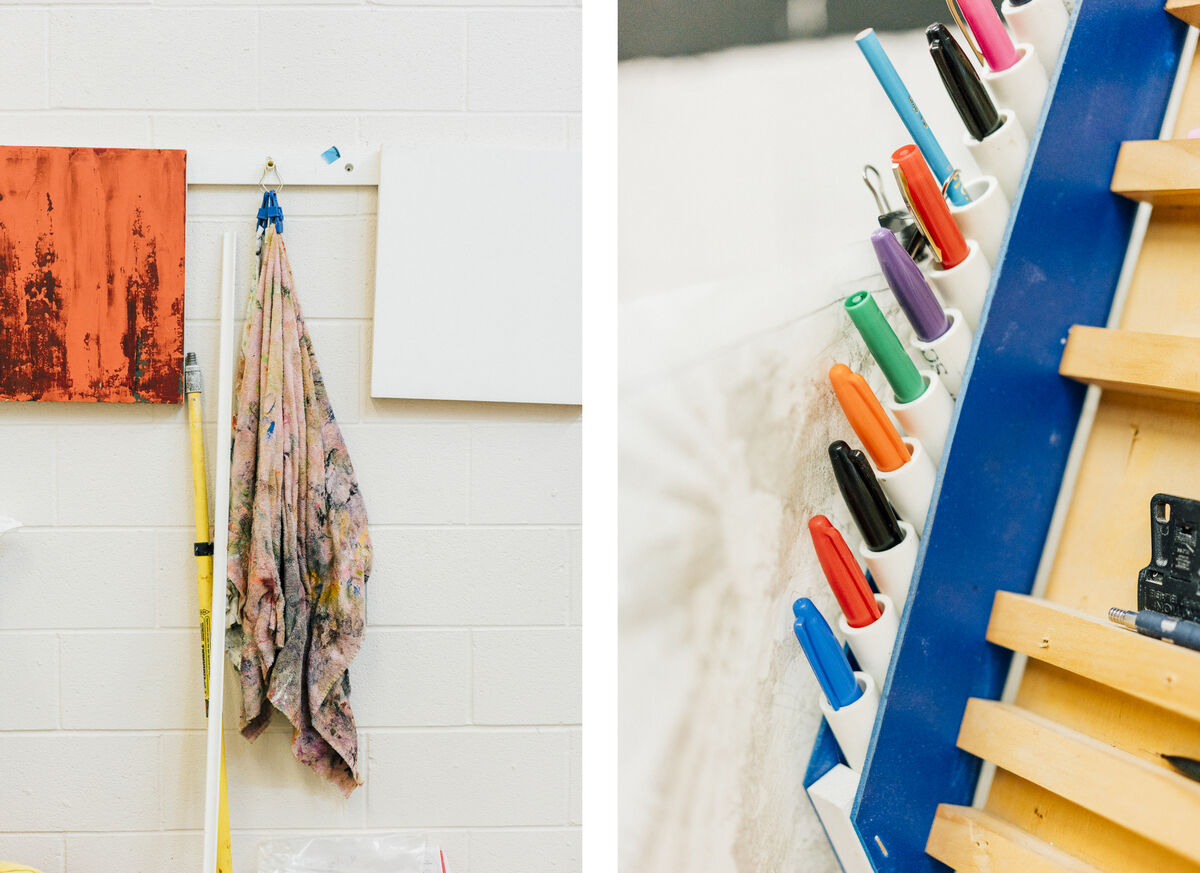 Growing Up in Watts, L.A.

The possibility that something awe-inspiring or fantastic can emerge from a place you least expect it has driven Marshall’s career, and reflects the shape of his life. Born in Birmingham in 1955, he moved with his family to the Watts neighborhood of Los Angeles in 1963, a year before the passage of the Civil Rights Act and two years before the Watts Riots racked the already socioeconomically strained neighborhood.
His family moved out of the Nickerson Gardens housing project (which inspired his “Garden Project” series) in 1964 and into a house down the street from the Black Panther headquarters, which was owned by a local barber. That barbershop inspired Marshall’s iconic group portrait De Style (1993), a massive work that presents history painting in the vernacular space of hair trimmings and banter, but also nods to several art-historical icons—including the 20th-century Dutch language of abstraction,
de stijl
, in its Mondrian-like, primary-colored interior elements—and even endows the barber with a Christ-like hand gesture.
Advertisement 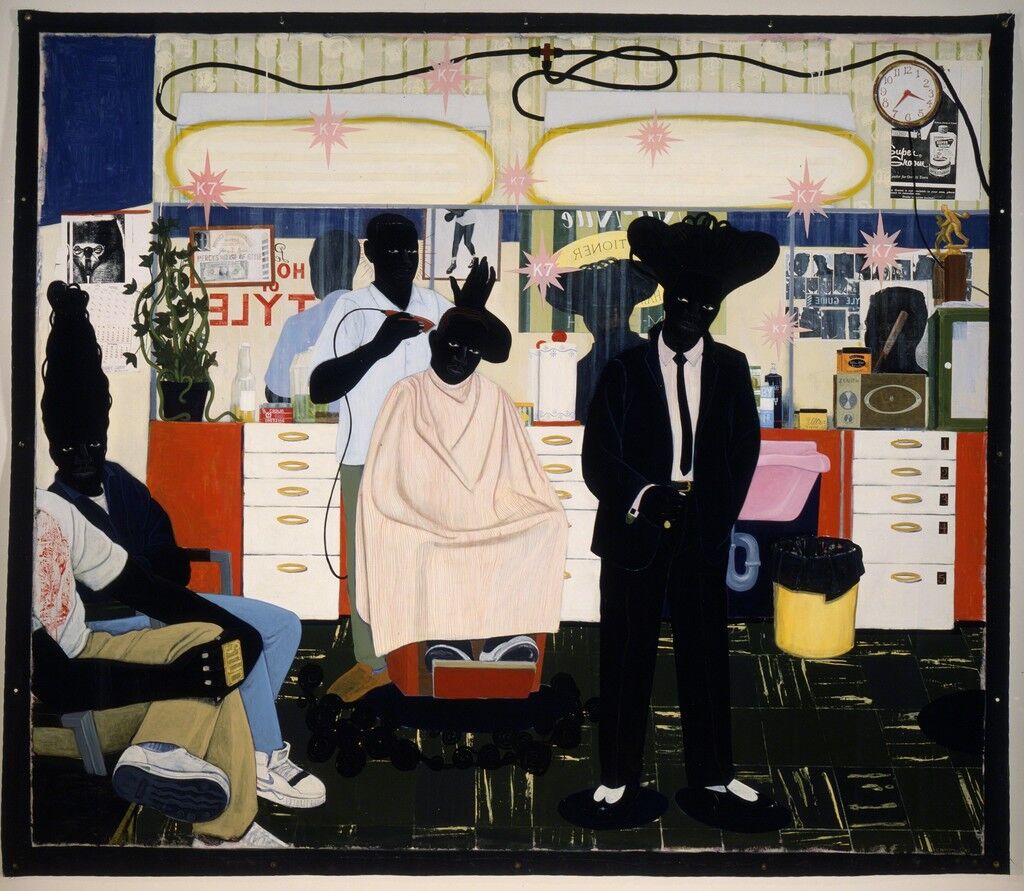 Kerry James Marshall
De Style, 1993
"Kerry James Marshall: Mastry" at MCA Chicago, Chicago
Powerfully influenced by the community of black artists in Los Angeles who flourished in the wake of the Watts Riots—
Betye Saar
,
Noah Purifoy
,
Charles White
, and others—Marshall sought out a traditional art education, choosing painting because it was, and still is, the dominant force in museum collections, and he wanted in. From a young age he voraciously mulled over books about Renaissance perspectival grids, his kindergarten teacher’s scrapbook of valentines and postcards, and the 1967 publication Images of Dignity: the Drawings of Charles White—which contained drawings of black people the likes of which he’d never seen. Marshall’s insatiable curiosity was fuelled by wanting to know why the work of great artists looked the way it did, which led him to repeatedly “haunt the galleries at LACMA,” as he says.

Marshall’s breakout work, A Portrait of the Artist as a Shadow of His Former Self (1980), was a black-on-black cartoonish portrait of a man with a cheshire cat grin who all but disappears, evoking Ralph Ellison’s famous book Invisible Man. “I am an invisible man,” Ellison wrote in 1952. “I am a man of substance, of flesh and bone, fiber and liquids—and I might even be said to possess a mind. I am invisible, understand, simply because people refuse to see me.” 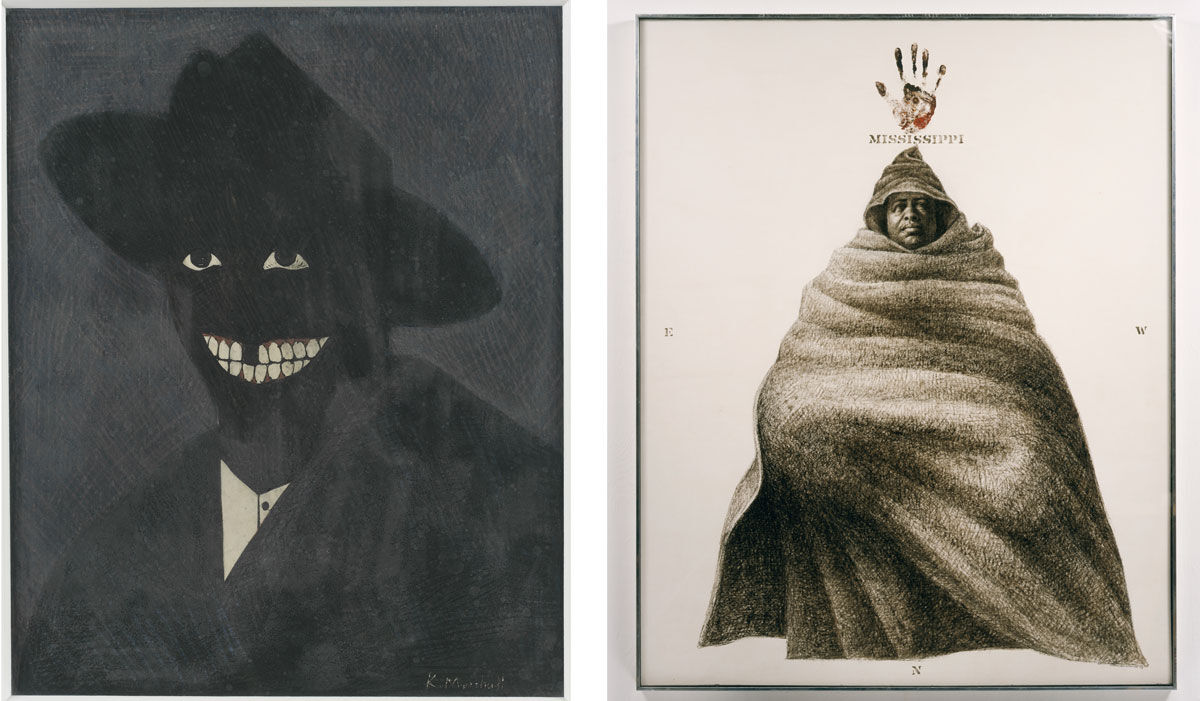 Since Portrait of the Artist, Marshall’s paintings have become increasingly complex in their compositions and their range of mark-making. But legibility is of utmost importance for the artist. “Clarity is a key quality for me,” he says. “Nothing should get in the way of seeing what the picture is trying to do. In my earlier work, there were lots of deliberate traces of the painter’s hand, such as drips and smears. Then I came to realize that the image as a force has to carry the responsibility of making a picture work. That is what has to produce the feeling of awe.”

The drips and smears to which Marshall refers have a technical name: “blots.” These gestural-looking marks, which first appeared in his “Garden Project” series, are not the result of pure expression, but rather are carefully studied and painted representations of those marks that we associate with
Abstract Expressionism
’s messy, subconscious automatism. In a painting like Better Homes, Better Gardens (1997), depicting Chicago’s Wentworth Gardens public housing development, they give the appearance of the artist having defaced his own work with graffiti. 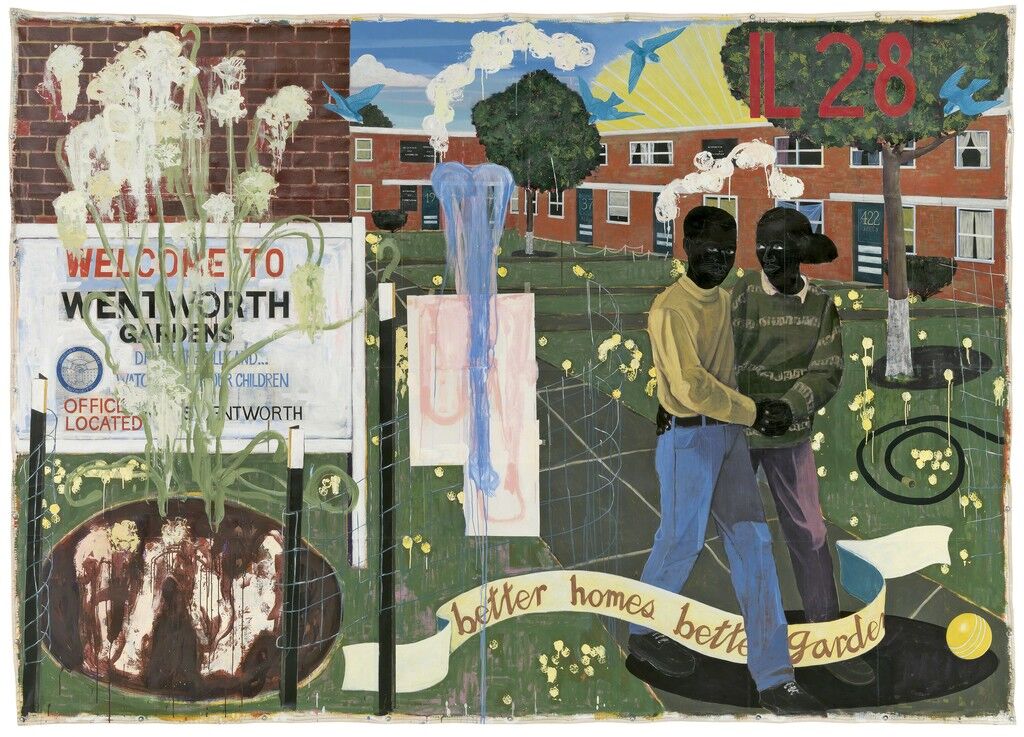 Kerry James Marshall
Better Homes, Better Gardens, 1994
"Kerry James Marshall: Mastry" at MCA Chicago, Chicago
The diverse range of styles seen at play in Better Homes invokes a collage sensibility that Marshall picked up during art school and continued after leaving. “I tried to make paintings that used collage as a logic,” Marshall says. “But because of the particularities of painting it means that for every different element and surface texture you had to change your technique.” In Better Homes, every component of the work—the text on the sign, the blots, the birds, the banners—is painted according to a different method.
Though the artist has since rejected his “blots,” favoring a more controlled representational language, he continues to apply this same rigorous intention to his paintings, using an architect’s triangle to create an intricate scaffolding of perspectival grids and sight lines. Such precision is crucial, he says, but so is creating a surface tension because it challenges how far you can push a painting’s stylistic quality and still have it hold together as a painting. “I’m trying to supercede sensibility with intelligence,” Marshall says of the control in his process, “to build the pictures so that people understand that this is being thought out from beginning to end, that nothing is left to chance.” 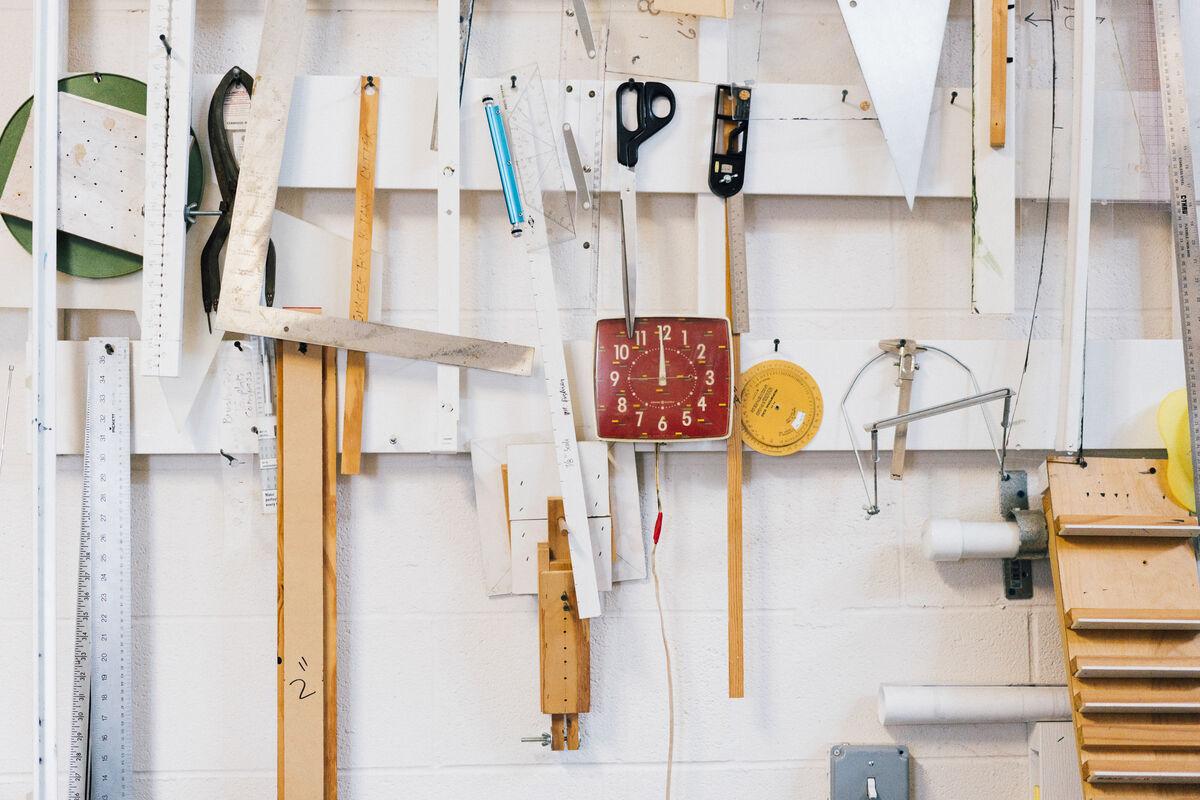 The title of Marshall’s upcoming retrospective, which begins at MCA Chicago before traveling to the Met Breuer and MOCA L.A., “Mastry," is also a reference to Marshall’s magnum opus: the comic series “Rythm Mastr” (1999-present), where black superheroes have powers derived from the seven gods in the Yoruba pantheon, and characters debate intellectual history, philosophy, and politics in black vernacular English. The series is set in “Black Metropolis,” the nickname for Bronzeville during the Great Migration, when its African-American population boomed. It’s a name that faded when a plethora of large-scale, problematic housing projects went up there in the ’50s and ’60s.
“Rythm Mastr” has morphed from an installation of drawn comics to video, light boxes, and—the artist hopes—a feature-length animated film. Within its alternative reality, the world of “Rythm Mastr” needs to be believable, so Marshall constructs scenes using aerial photographs of his neighborhood supplied by the Chicago city planning office. “It creates a connection to a real place,” he says. “That’s a big part of the idea: that in this place, fantastic things can happen. Nobody imagines spectacular things like that going on in these neighborhoods, so somebody’s got to establish that possibility. You have to show that from this particular place, there’s no place you can’t get to.” 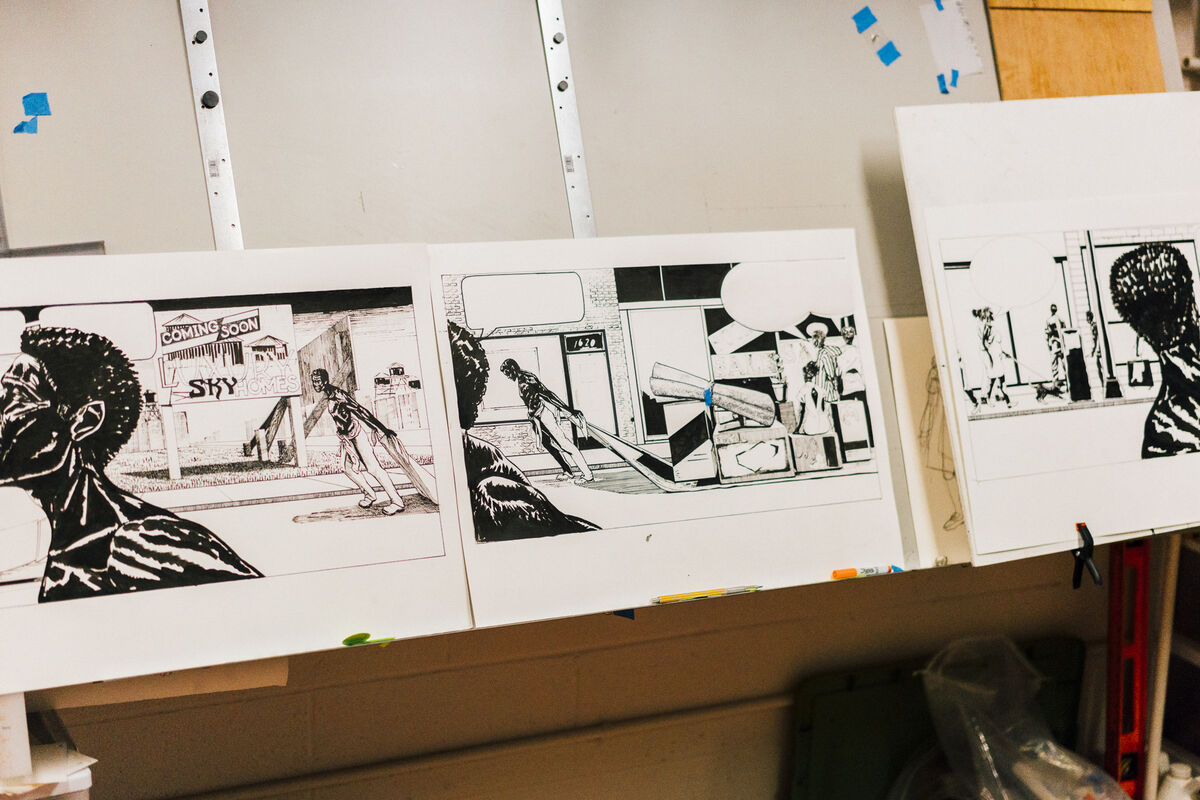 Marshall didn’t see any black superheroes in his comics growing up, and there aren’t many now. He conceived “Rythm Mastr” to speak to both the popular visual culture (what we see in comics or films) and “official” visual culture (what we see in museums) that shapes our worldview. In one page, for example, a male security guard from the Art Institute of Chicago (AIC) shows a woman the entry to the not-yet-open gallery for “New African Art and Indian Art of the Americas.” His monologue alludes to the promising replacement of the contemporary art galleries with African art, formerly considered “artifact.”
“Rythm Mastr” overturns assumptions left and right: “black speech” is not necessarily anti-intellectual; superheroes are not just for white kids; and amazing things can happen in seemingly non-amazing places. “I’m trying to produce an epic story of every aspect of people’s lives, from romance to gang violence to poverty to cultural identity,” Marshall says. “All these things have to be wrapped up in a story with black kids at the center of all of those activities. So at every level of human interaction, they are participating rather than seeing the reflection of what other people are doing.” 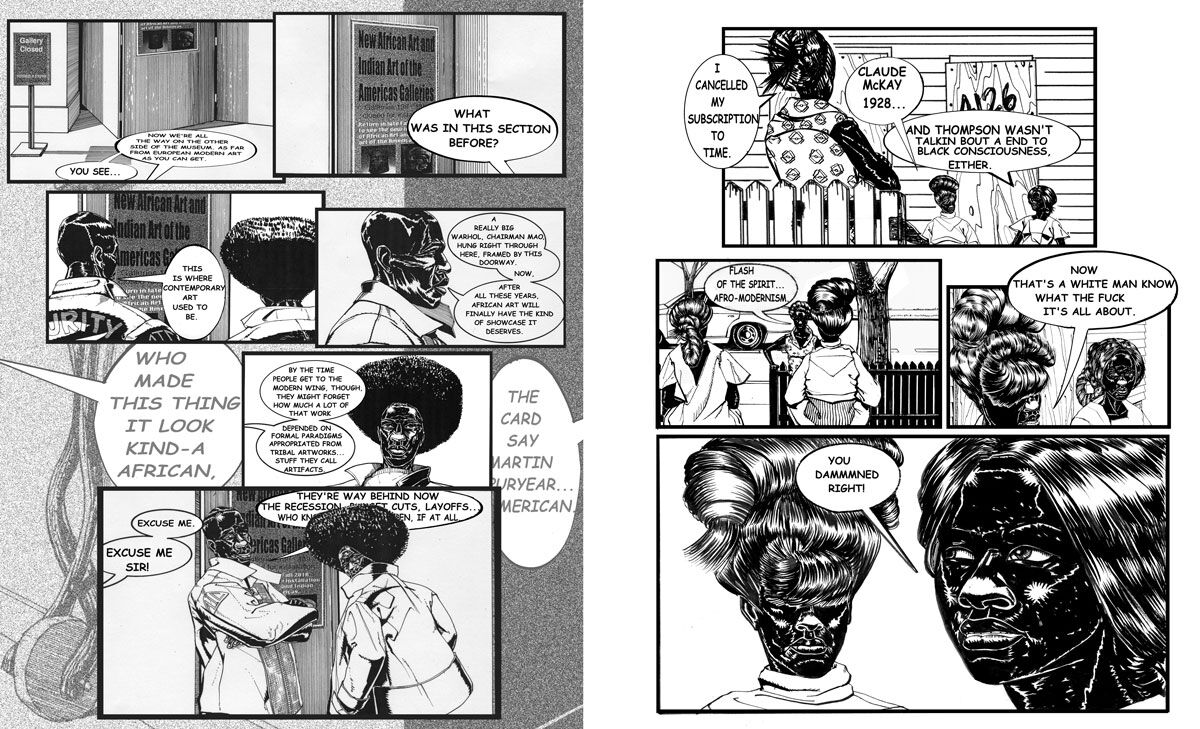 The need for his audience’s deep engagement with a work of art is, for Marshall, connected to the transformative powers of desire. “For me, this is one of the reasons why I stayed so close to the figure in my work and why I think it’s important to continue to project the black figure into the space of paintings,” he says. Citing art historian W.J.T. Mitchell, who wrote the text What Do Pictures Want? (2005), Marshall reminds us: “Images don’t only express our desire but teach us how to desire in the first place. When you get used to seeing images like this that seem attractive or powerful, it teaches you how to desire more of them. They do set your expectations.”
Facing a career retrospective, Marshall says, is a bit strange, because it forces you to look backwards when you’ve already moved on to other projects, often away from your “signature” look. But such risks  are important: “If you are trying to explore what’s possible within a certain genre or idea,” he says, “you have to be fluid enough to cover a wide range of media and treatment. That should be the thing that people expect from you—that they might see almost anything.” 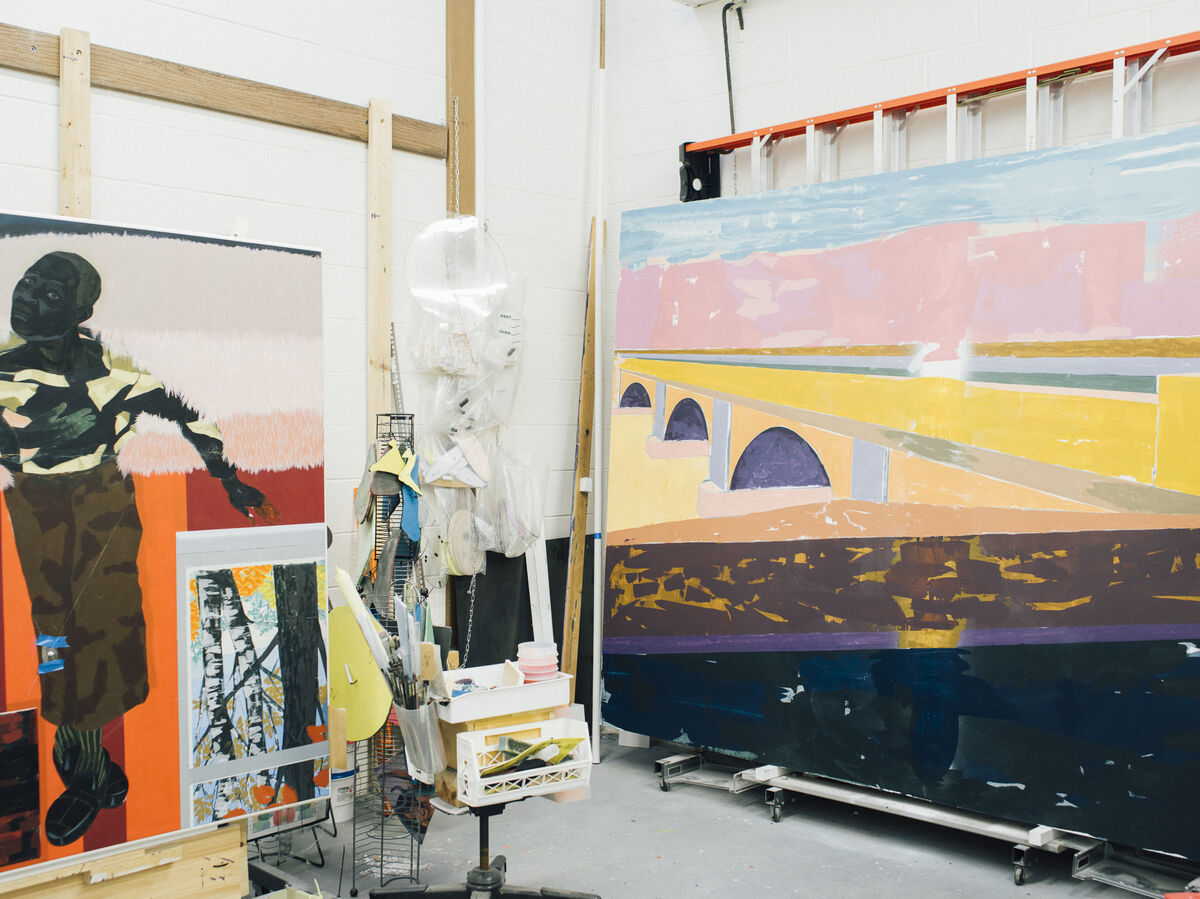