At the Garage Museum, Robert Longo Builds Chapels to Goya and Eisenstein 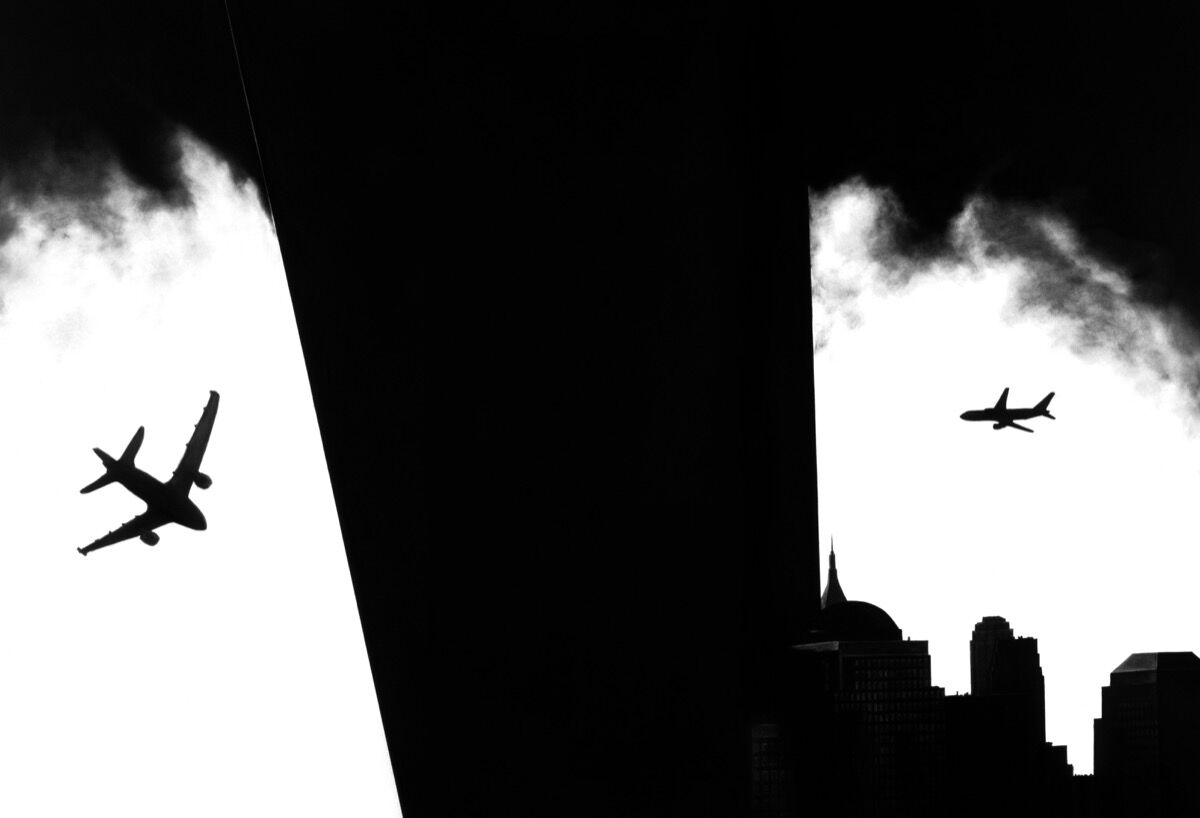 Robert Longo, Untitled (The Haunting), 2005. Courtesy of the artist. Collection of Siegfried Weishaupt.

“As an artist, you are a reporter in the time that you live in,” says
Robert Longo
, who for more than 35 years has mined the daily bombardment of news media, as well as art history, for epochal images that he translates into cinematic billboard-sized charcoal drawings. “Both
Goya
and Eisenstein were clearly responding to the times they were living in. We’re all witnesses.”
Longo’s longtime artistic affinity with the Spanish painter who served church and king at the turn of the 19th century, and with the early 20th-century Russian filmmaker who worked for the state in the aftermath of the revolution, is explored in “Proof: Francisco Goya, Sergei Eisenstein, Robert Longo,” opening at the Garage Museum of Contemporary Art in Moscow on September 30th.
“The connection between them all is epic narratives,” says Kate Fowle, chief curator of the Garage, who had heard Longo speak over the years about the influence of Goya and Eisenstein on his work. She invited the 63-year-old, Brooklyn-based artist to collaborate on organizing this show, which creates a dialogue across three generations marked by war and civil unrest. “There’s a way in which they’re looking at the contemporary societies in which they lived, the politics and the cultural situation,” she says, “and making commentary on it without it being documentary or reportage.”
Although the three artists are known primarily for different media, Longo chose to focus on Goya’s etchings and Eisenstein’s storyboards to underscore the fundamental importance of
black-and-white
drawing to them all. During two extensive research trips to Russia, Longo discovered that the State Central Museum of Contemporary History of Russia (formerly the Museum of the Revolution) in Moscow had a complete and pristine set of some 400 aquatint etchings from all four of Goya’s major suites—a gift from Spain to Russia in appreciation for the country’s aid in helping them try to fight off Franco. 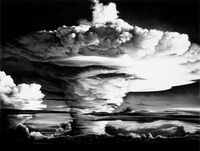 4 Images
View Slideshow
“These looked like they were printed yesterday—you could actually see the thickness of the inks,” says Longo of the works, which have never before been loaned for exhibition. “I tried to pick etchings that were more cinematic, or almost photographic in the action that happens in them.” He remembers first seeing Goya’s prints at the Prado in Madrid, during a year he spent traveling through Europe before college, tracking down the originals of works pictured in Janson’s art history textbook.
His 50 selections from “The Disasters of War,” “The Caprices,” “The Follies,” and “Bullfighting” will be shown in an eight-sided chapel-like room devoted to Goya within the flow of the exhibition. In juxtaposition, Fowle—who handled the selection of more than 35 works by Longo from the last 15 years—chose his large-scale, apocalyptically beautiful image of an atomic explosion called Mike Test (Head of Goya) (2003). It is named for Goya’s painting The Colossus (1818–1825), of a giant looming in a stormy landscape, which always reminded Longo of a mushroom cloud. (It’s worth noting that the painting’s attribution to Goya has been reconsidered as of 2008.) Fowle is also including small graphite studies Longo made as homages to Goya’s A Procession of the Flagellants (1812–1814) and Saturn Devouring His Son (1820–1823).
Longo went to the Russian State Archive of Literature and Art to research Eisenstein’s sketches and storyboards for his films, which he first learned about through a structuralist filmmaker he met as a student at State University College, Buffalo, in the early 1970s. “Eisenstein’s films have such incredibly composed shots, done primarily from a lock-down camera,” says Longo. 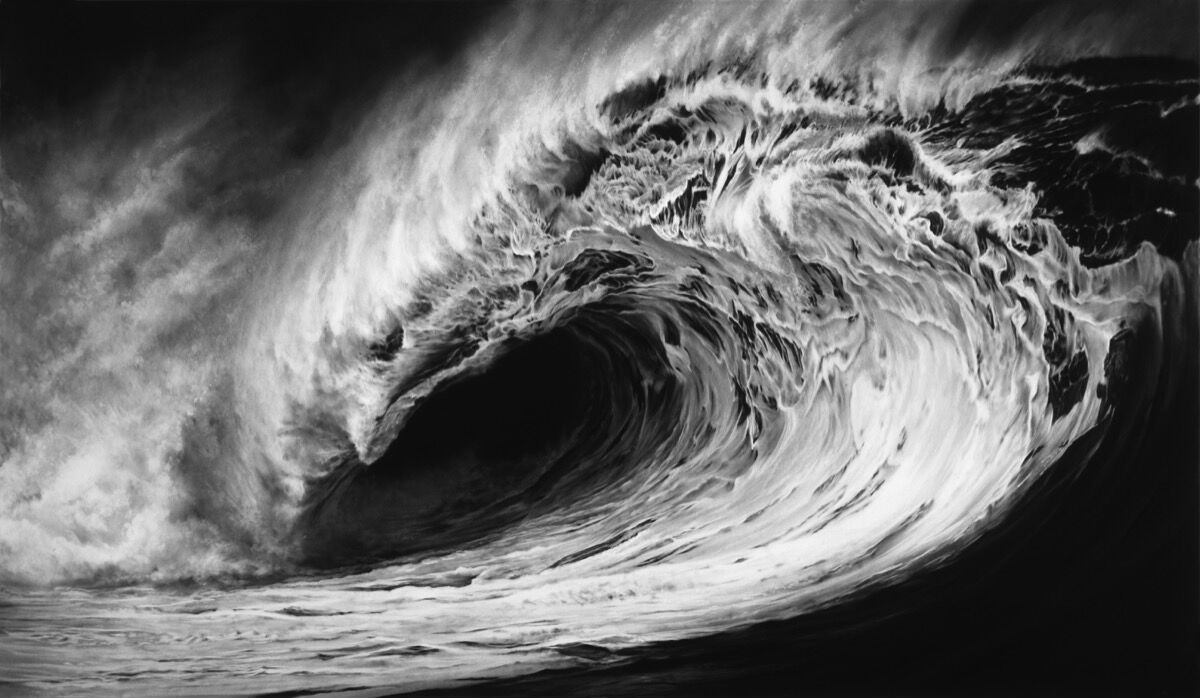 3 Images
View Slideshow
He has selected 43 drawings to be displayed in a long, internally lit pew in a darkened gallery with simultaneous floor-to-ceiling projections of seven films—including Battleship Potemkin (1925), October: Ten Days That Shook the World (1928), and Ivan the Terrible, Parts I and II (1944; 1958)—radically slowed down so they can be viewed one frame at a time. He was surprised by the images of forests and waves in Sentimental Romance (1930), a film that he hadn’t previously seen. “It looked like I had used this film to make my own work,” he says. Fowle has included Longo’s monumental drawings of a wave suspended in spiraling crash and two forest scenes back-lit by dazzling light.
“Robert is often remembered for ‘Men in the Cities,’” says Fowle, referring to Longo’s series, launched in 1979, of men in dark suits frozen in contorted bodily positions suggestive simultaneously of ecstasy and death. These iconic images have been widely echoed in everything from iPod ads to the opening credits of Mad Men and eerily foreshadow the images of people falling from the towers on 9/11.
“I was really interested in trying to frame his work in a different way,” continues Fowle, “and tap into the art history that he is constantly thinking about.” In the first room of the show, she will juxtapose four works—of people praying at Mecca, of
Picasso
’s Guernica (1937) redacted with several dark vertical bands, of a monolithic iceberg, and of a giant robot plowing through urban rubble—to set up the themes of nature, religion, and humanity’s destruction of the world that the artist returns to again and again. 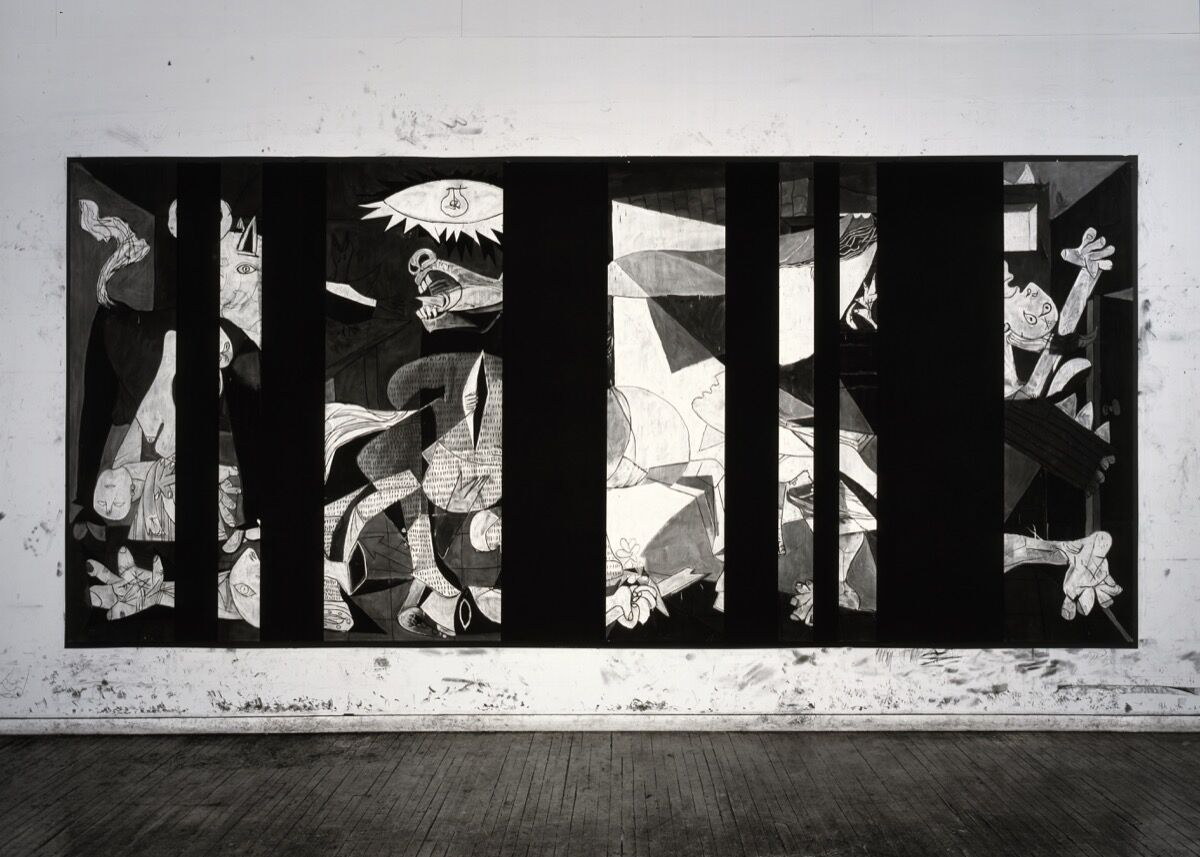 4 Images
View Slideshow
For Longo, taking on a curatorial role brings him full circle. After finishing his BFA in sculpture in 1975, he and several other graduates and students, including his then-girlfriend
Cindy Sherman
, founded the alternative space Hallwalls in a former ice factory in Buffalo to exhibit their own work and organize exhibitionsthose of others’. “We brought all our heroes from New York up to Buffalo to do installations—
Serra
,
Acconci
,
Benglis
,” says Longo.
He moved to New York to devote himself to being an artist after he was invited to participate in the seminal “Pictures” show at Artists Space in 1977. There he showed a cast aluminum relief based on a still from a Fassbinder movie of an American soldier at the moment he was shot, which received a lot of attention. “Is he dying or dancing?” poses Longo, who liked the ambiguity of the soldier’s distorted posture. It reminded him of a childhood game he played with his friends—of who could die the best.
With limited resources, Longo turned from making sculpture to charcoal drawings instead. Photographs he took of his friends dancing to punk music on the roof of his studio and projected large-scale onto paper became the template for his “Men in the Cities” drawings. Images culled from the internet, which he amplifies and alters on the computer to heighten the drama, continue to be his springboard.
“Making drawings is like a wrestling match sometimes,” he says. “If it gets too photorealist or too illustrative, it’s a disaster. It has to have a physicality and find that middle ground between representation and abstraction.”
—Hilarie Sheets
Related Stories