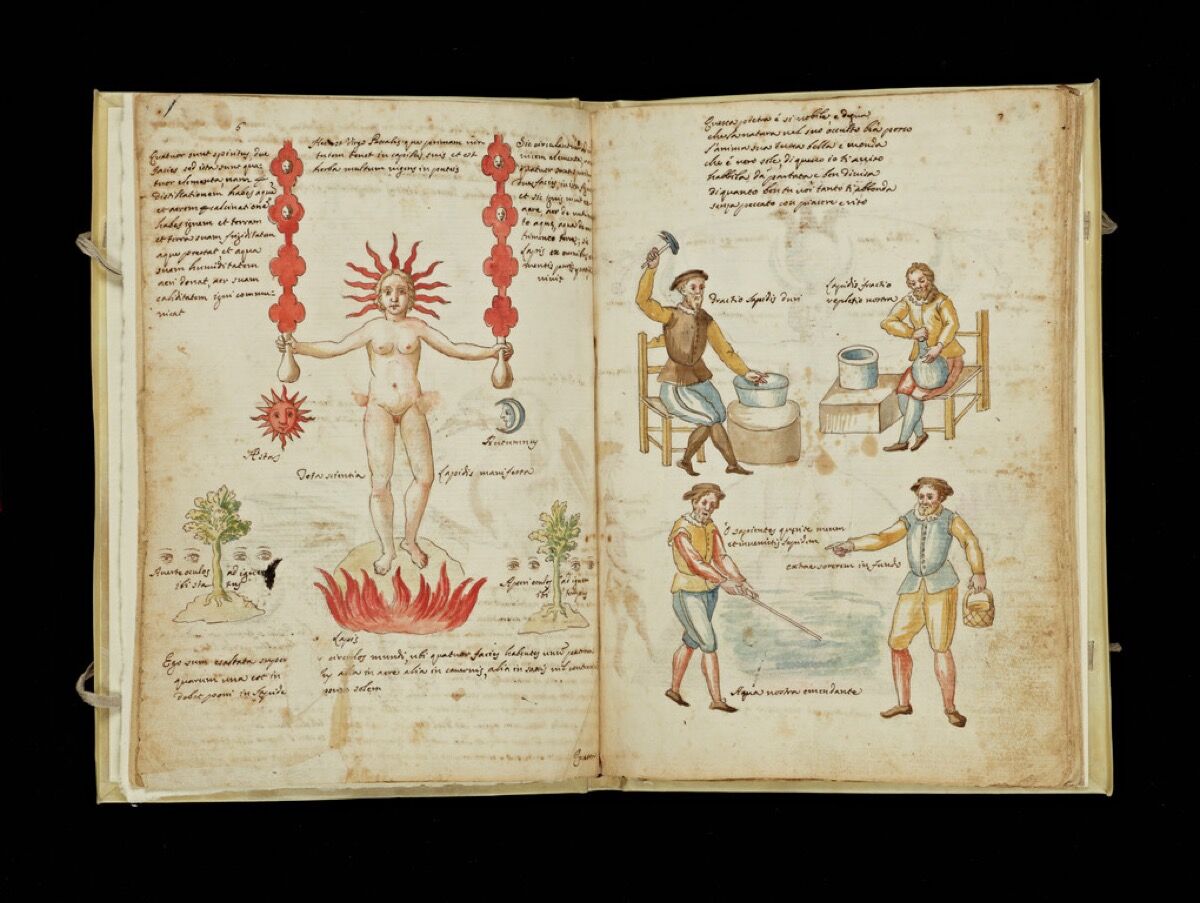 As David Brafman puts it, “Alchemy is a science tinged with spirituality and infused with a schpritz of artistic spirit.” Even this idiosyncratic description hardly begins to outline the mysterious, often misunderstood practice of alchemy. Since ancient times, it has stood at the crossroads of chemistry, faith, and art. Alchemists throughout the ages sought to harness the power of nature through scientific intervention, oftentimes implementing it to artistic effect. In medieval Europe, alchemy was referred to as “The Great Art.” The Islamic world went even further, ditching the “great” and simply calling alchemy “The Art.”
But now Brafman, who is Associate Curator of Rare Books at the Getty Research Institute (GRI), is helping to demystify the practice with what is perhaps the most comprehensive exhibition about alchemy to date, one that links the practice to artistic expression from antiquity to the present, and highlights the contributions of non-European cultures. “The Art of Alchemy,” which opened this week at the Research Institute galleries at the Getty Center in Los Angeles, is broken up into three sections, each covering a different aspect of alchemy’s relationship to art—including its philosophical origins, its impact on the visual arts in Asia and Europe, and the ways in which its legacy still asserts its presence in the modern world. 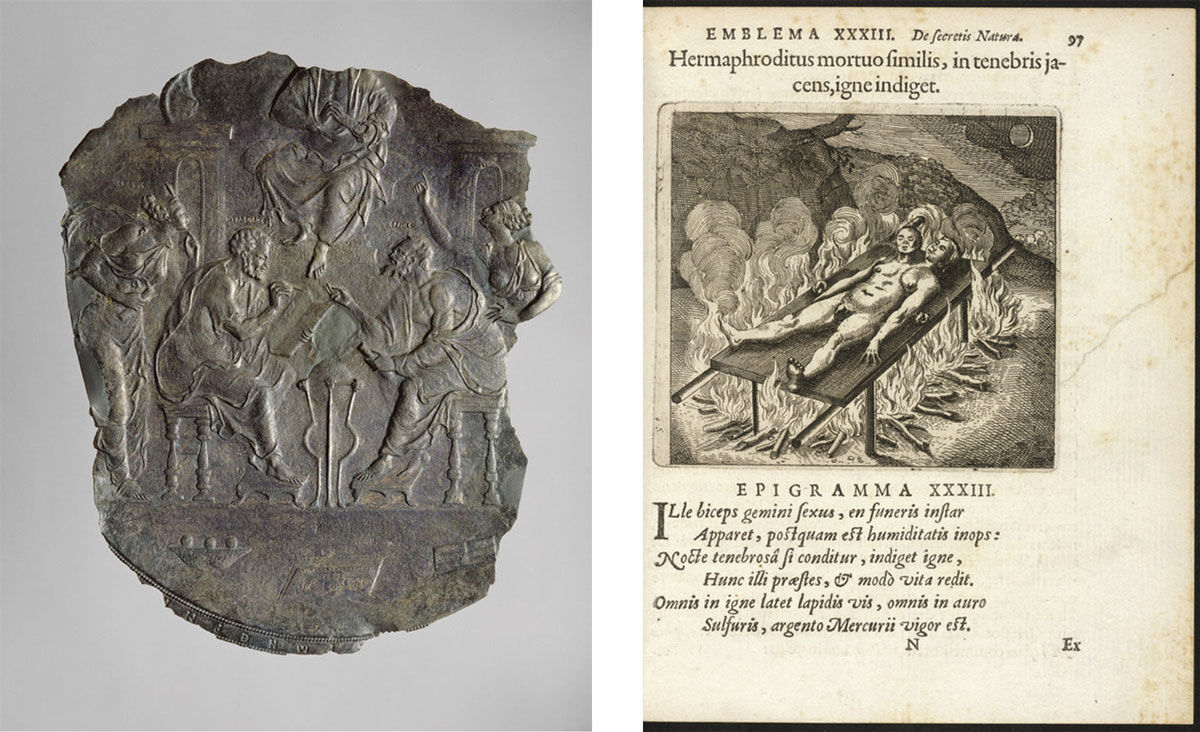 The occasion of this exhibition created a unique opportunity to present the vast collection of books on alchemy and esoterica held by the GRI, alongside art objects culled from over two millennia, most of which are owned by the Getty Museum. In 1995, the GRI purchased an extensive collection of alchemy books from the widow of Manly Palmer Hall, a Los Angeles theosophist who devoted his life to the study of spiritualism in all ages and in all cultures. “When we bought the collection, we bought it for our interest in the history of visual symbolism and allegory and how it dovetailed with art,” Brafman says. Upon closer study, it became clear that in addition to being art-historical documents, these rare books could also provide insight into humanity’s developing understanding of the world.
Rather than simply juxtaposing texts and objects, “The Art of Alchemy” brings the two together to illustrate the recursive relationship between alchemaic and artistic processes. While alchemists played a role in developing the materials and techniques used by artists—including the invention of oil paints, chemicals used in etching, and malleable metals used for sculpture and architecture—artists were in turn responsible for creating the symbolic imagery used to explain alchemaic phenomena. “A hermaphrodite, a male and female being bonded together over the fire, is this allegory for artificial creation,” Brafman explains, referring to an image in a book on display in the exhibition. The image is, furthermore, a visual allegory for a certain type of gilding using a mercury amalgam.

Advertisement
Possibly from as early as Babylonian times to as late as the 18th century, it was believed that there were seven pure metals associated with the seven known celestial bodies, each of which was personified by a Roman god. Aphrodite, or Venus to the Romans, was associated with copper, while Hermes was associated with mercury—the metal taking its name from the god’s Roman pseudonym. The merging of the two gods to form a new body represents the merging of copper and mercury through alchemy, which creates a magnificent golden patina.
The image of the hermaphrodite signifies “this idea of doing something that nature doesn’t naturally do, the idea that you’re manipulating nature,” as Brafman explains. It will be displayed in the exhibition alongside two different objects—a Bodhisattva from 11th-century Nepal and a Christ in Majesty figure from 12th-century France, both in similar pose—each crafted using this process of mercury amalgam gilding. 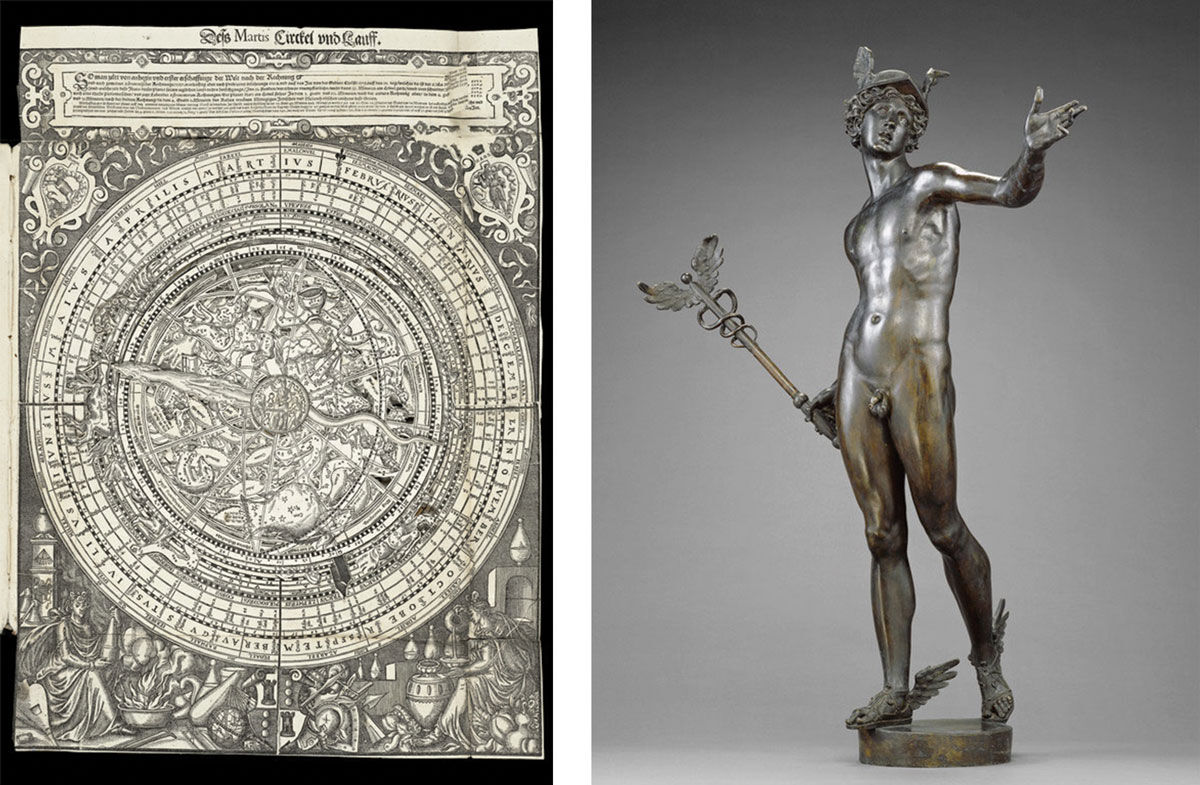 We have alchemists to thank not only for the creation of artistic materials, but also for originating processes that led to the production of gunpowder and drugs from aspirin to heroin. Never has the practice fit neatly in either category of science or art. “In some parts of Medieval Europe, apothecaries and pharmacists and art suppliers shared the same guild,” Brafman notes. Even today, alchemy continues to blur the line between the scientific and artistic spheres. Liquid crystal forms the digital screens of our modern world and traces its existence to the experimental spirit of early alchemy.
The aim of alchemy, to both imitate nature and transcend it, still lies at the heart of artistic practices today. Creativity itself can be said to describe a process of going beyond mere imitation—to create a new reality. “Alchemy always carried with it this sense of mystery and awe at the wonders of creation,” Brafman says. “If you can create an object and give it some soul, you are doing what the divine creator did.”
Nora Landes
Related Stories 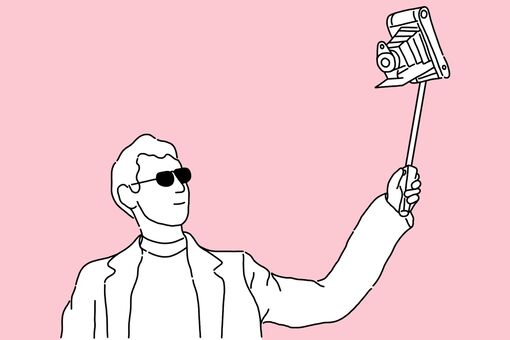