How This Painter’s Blindness Became His Greatest Asset 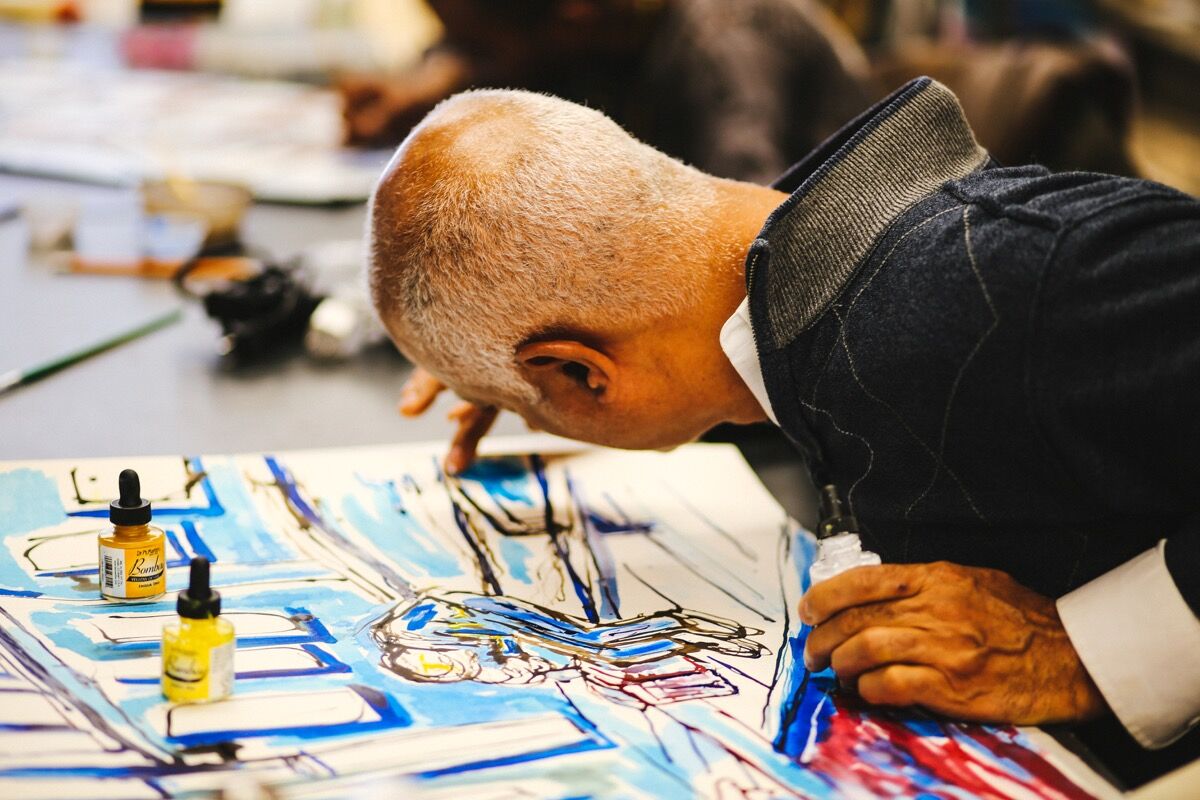 At first, it was just a small spot in his field of vision. Nothing to worry about,
Charles Blackwell
thought. It’ll go away.
After all, he was a 20-year-old art student—resilient enough to bounce back from a massive fall nine months earlier, when he’d taken a wrong turn during a hike near Santa Cruz and toppled headfirst down a steep slope. Blackwell successfully battled both internal bleeding and a bout of pneumonia, soon returning to classes at Sacramento City College. It appeared that the young artist had managed a full recovery. But more and more, Blackwell was having trouble identifying the faces of friends saying hello as they passed by. Then, driving home one night, he realized he couldn’t see the traffic lights. Horns blaring at him from all sides, he began to panic. That was the last time Blackwell—who would soon be declared legally blind—drove a car.
But it didn’t mark the end of his artistic career. Now 65 and based in Oakland, Blackwell has participated in a number of high-profile shows for blind artists—in 2009, he was one of three featured artists for a San Francisco exhibition covered by the New York Times. And then, last August, Blackwell attracted the attention of Boston-based startup ArtLifting. Founded in 2013, the company is fostering a market for artists experiencing homelessness or living with disability, offering them an online platform to sell their work. COO Kelly McKenna first came across Blackwell’s portfolio at San Francisco’s Hospitality House, a homeless shelter with a community arts studio that the artist frequents. Since then, ArtLifting has placed his work with corporate customers on both coasts—some of it sold sight unseen. 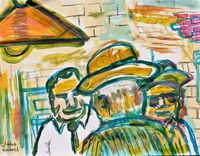 5 Images
View Slideshow
Such success didn’t always seem in reach for Blackwell. He remembers the panicked moment in the car as the beginning of a year-and-a-half-long tailspin. “I didn’t even get up and go to class the next morning,” he tells me from his apartment in Oakland. “I just had to give up.” A visual arts major, Blackwell couldn’t reconcile his rapidly deteriorating eyesight with his artistic dreams. He dropped out of school and spent months grappling with his new life; he was now legally blind, with only his limited peripheral vision remaining. “I thought, ‘Man, what did I do to deserve this? Why is this happening to me?’”
With the support of a cousin, Blackwell slowly began to get back on his feet. He applied to California State University, Chico and in 1975 received a Bachelor’s degree in sociology. He went on to graduate school at Sacramento State University, where he studied social work. But even with the additional schooling under his belt, Blackwell struggled to find a job. “There’s more than just being able to go through daily life after losing your eyesight,” he says. “It comes down to an emotional side. There’s a lot of rejection. Boy, I got hit hard.”
So, in the meantime, Blackwell picked up a brush and began to paint. These initial works featured
pop art
-inspired carrots, a carryover from his studies as an art student. Though he had no expectations—“I was just having fun,” he recalls—the works left such an impression on one of Blackwell’s grad school friends that he helped the aspiring artist apply for a federal grant from the Comprehensive Employment and Training Act (CETA). Blackwell won the grant, and in 1977 he became the CETA artist for Sacramento County.
From there he painted more carrots, as well as braille dots on eight-foot-tall canvases. He experimented with some of the techniques he was using before his life-changing fall, including
Robert Rauschenberg
-esque photo transfers. In a year and a half, Blackwell made some 75 works in total. “I was like an assembly line,” he remembers. “I was producing art like crazy.” 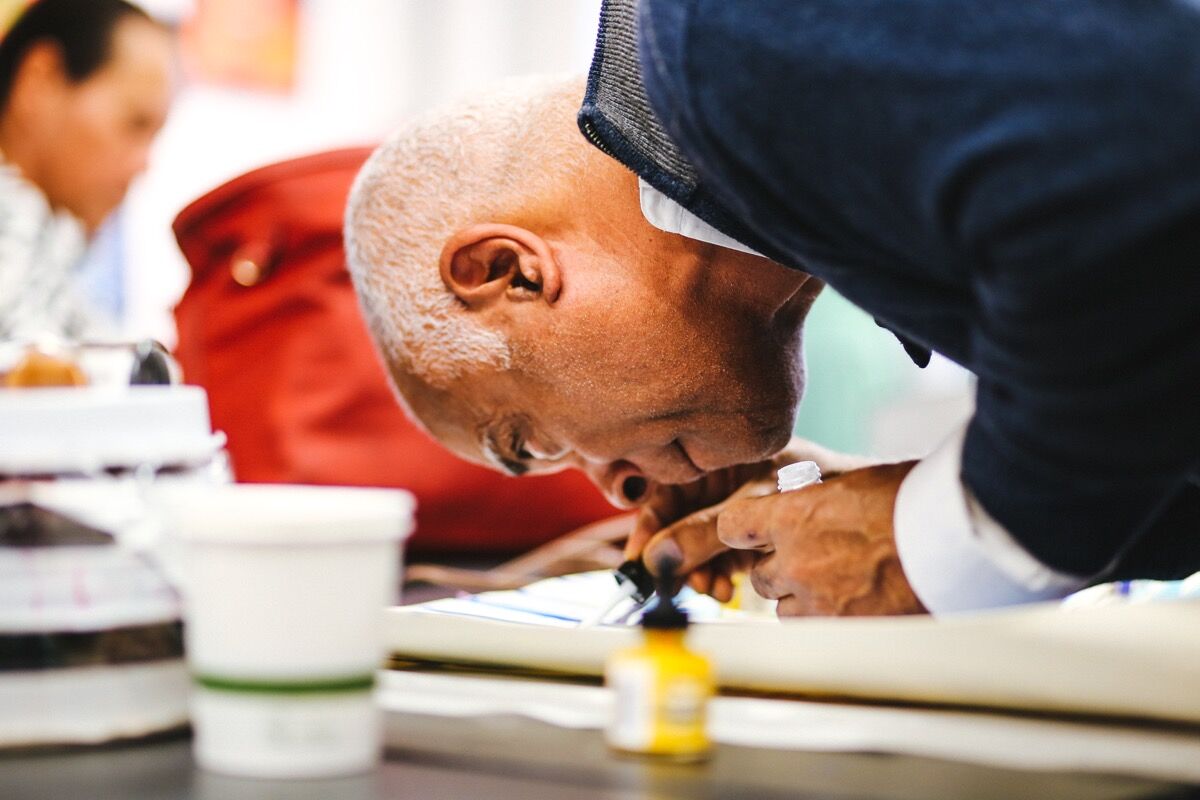 Advertisement
His prodigious creative output continued through the following decades, as he moved to Washington, D.C., and then back to the Bay Area. Blackwell—a bit of a Renaissance man—published three books, several plays, and a number of poems. He also fine-tuned his distinctive method of artmaking: To account for his impaired vision, the artist leans in close to his work, his face hovering just two or three inches away from the page. He works primarily in ink, which he squirts onto his canvas in swatches of raw, vibrant color. Occasionally, he asks those around him for help in selecting the right shade. His
Fauvist
-tinged canvases are often inspired by jazz, peppered with wailing saxophones or thrumming upright basses. Others depict tribal masks on fields of intense primary colors.
Building on the momentum Blackwell has developed over the past decade, ArtLifting is exposing new, tech-savvy customers to the artist’s work. He hopes these additional sales can help him secure stable housing, something he’s struggled to find for years amidst the skyrocketing prices of the Bay Area’s housing market.
But despite continued challenges, ArtLifting’s artist outreach director Hillary Kaufman said Blackwell is resolutely optimistic. “I’ve never, ever heard or seen him express any negative sentiments about his situation or otherwise,” Kaufman says. “He’s the most positive person, and that speaks very strongly given his situation. I think that’s an important part of who he is—and who a lot of our artists are.”
Blackwell credits that positivity in part to something his family physician told him when he first went blind. “Our doctor, he said, ‘Take your defect and make it your asset.’ My blindness, in a sense, gives me the originality,” he explains. “Before, I was trained, I could do a sketch of you in a minute and a half. I could have been a courtroom artist. I can’t do that no more, so I just had to take another approach. I use my fingers, I use the bottom of a paintbrush, I pour the paint onto the paper.… I’d much rather do that. That’s what I’m after—that improvisation, that serendipity.”
Abigail Cain
Related Stories