From an Apple Watch Developer to Brooklyn Gallerists, Experts Tell Us How and Why to Collect Moving-Image Art

Alexxa Gotthardt
Jun 2, 2015 9:54am
As screens multiply around us and the internet becomes one with our bodies—take Apple Watch, Google Glass, and recent strides in cyborg technology—it’s no surprise that the art world is paying closer attention to the moving image. Museums and institutions were among the first to catch on, perhaps thanks to easier access to resources needed to display art made from film, video, animation, and more recently from simulation, GIFs, and the shapeshifting fabric of the internet itself.
The art market, however—and its consortium of collectors, galleries, and fairs—has acclimated to moving images more slowly. But as digital communication becomes universal and as the number of artists working in these mediums grows, a pioneering set of curators, gallerists, and collectors have taken notice—and they aren’t afraid to engage with art that pipes through electronic equipment, plays on screens, and is stored on disks, digital files, and the cloud.
In advance of this year’s LOOP Barcelona, an art fair established in 2003 to explore the expanding field of video and time-based work, Artsy spoke with a group of collectors leading the moving-image charge—as well as several of the experts who advise them. LOOP was the first of a small but burgeoning group of art fairs (including Moving Image, now in New York, London, and Istanbul) that double as Petri dishes for the intersection of moving images and the market. Here, collectors Haro Cumbusyan, Larry Eisenstein, Julia Stoschek, and Ivo Wessel, along with Lori Zippay, director of Electronic Arts Intermix, and Elle Burchill and Andrea Monti, of Microscope Gallery, discuss the challenges and rewards involved in collecting and caring for an ever-changing medium.

Portrait of Ivo Wessel. Photo by Via Lewandowsky.

Berlin-based software developer and founder of iCodeCompany Ivo Wessel has been amassing a collection and inventing creative solutions for the display, organization, and preservation of video and new media art for almost 20 years. This began during the 1990s, "when more video works became visible in exhibitions and the necessary hardware became affordable," he explained. One of his earliest and favorite acquisitions was
Christian Marclay
’s Telephones (1995). “It’s an encyclopedia of cinema (all telephone footage from Hollywood movies), technology (100 years of telephone technology), and—last but not least—‘user behavior,’ or how people lie, talk, listen, answer, react on a phone,” said Wessel. An interest in user behavior drives Wessel’s collecting habits; he not only engages with art through acquisition but also creates apps for (and in collaboration with) collectors and artists working with moving images, like Carsten Nicolai, Via Lewandowsky, Karin Sander, and Wim Wenders.
Fifteen years ago, in order to show video art without DVDs, he built VideoArtBar for Windows tablet PCs. “The tablet could be connected to a projector and allowed to define playlists for convenient presentations for galleries and collectors,” Wessel noted. “As the iPad came out, I switched to this device—I’m an iPhone/iPad/Apple Watch developer so this new generation of devices changed the way I handled my collection a lot.”
As new viewing platforms and technologies emerge, Wessel is adamant about maintaining the accessibility of moving-image work—this means ensuring that video and new-media files are routinely updated and migrated into current formats. “Keeping videos up to date doesn’t only mean watching them regularly but also preserving them in a technical sense, transferring them to new data and presentation platforms,” he said. “As a collector, owning something is not enough—upkeep and preservation are also part of the job.”

Advertisement
Julia Stoschek bought her first piece of art in 2002, after visiting Harald Falckenberg’s radical collection in Hamburg. Since then, she has grown a collection of durational and moving-image works—and opened a public space to house and actively rotate it. “The moving image reflects the ephemeral, which is a defining feature of our time,” Stoschek explained of her collecting concentration. “This is one of the reasons why the main focus is on time-based media art, and also on performance as a time-based art.”
While video and new media can tend to feel especially of-the-moment, Stoschek’s collection is rooted in work by artists who pioneered the use of new technologies in the 1960s and ’70s, like
Peggy Ahwesh
,
Chris Burden
,
Joan Jonas
, and
Sturtevant
, to name a few. “The interrelation between works by emerging artists and historical pieces from the 1960s is very important, not only in terms of conceptual similarities and differences, but also to make evident a history of video art,” said Stoschek.
Collecting such a range of moving-image work requires special attention to changing technologies and viewing platforms, which Stoschek notes as a challenge, but not an insurmountable one. “The most evident change over the last decades is the technical aspect. For collectors there was—and still is—a significant trepidation about art that is, first of all, easily reproduced and, second, sustained by a technological medium,” she said. “The greatest challenge, however, lies in its proper archiving, which constantly increases in complexity. Media and carriers have modernized rapidly and changed fundamentally in the last decades.”

Larry Eisenstein and his wife Robin Zimelman have been collecting art for 15 years. In the last five, their focus has homed in on work made of moving images. After acquiring their first video work in 2005, when they saw a three-screen video by Taiwanese artist Tsui Kuang-Yu at the Venice Biennale, “there was some sporadic acquisition of video here and there, but there has definitely been an acceleration in the past few years,” said Eisenstein. “I would say that it’s because of the quality and the nature of the world today—there are just a lot of exciting artists exploring internet-based and new-media work. And when you see galleries devoted to moving image, like Microscope in Bushwick, it makes you step back and say ‘this is not just an add-on to a gallery program to fill a moving image quota.’”
Recently, Eisenstein and Zimelman transformed two rooms in their home outside of Baltimore into black box theaters to accommodate their ever-growing collection, which includes works by
Ryan Trecartin
,
Ian Cheng,
Erica Scourti,
Tommy Hartung
, and
Peggy Ahwesh
, among others. “We’ve recently had the advantage of becoming empty nesters, so that freed up one small bedroom,” Eisenstein said. “With the addition of a blackout shade and a quality projector, we realized it would be a perfect black-box space.” They did the same with an office, now home to the
Trisha Baga
installation Love—Poem (2014), which includes sculptural elements along with a video projection. “There was definitely an intimidation factor when we started as to how to display moving-image work,” the collector recalled, “but once you commit to it, and once you’ve done it once, the apprehension subsides.” 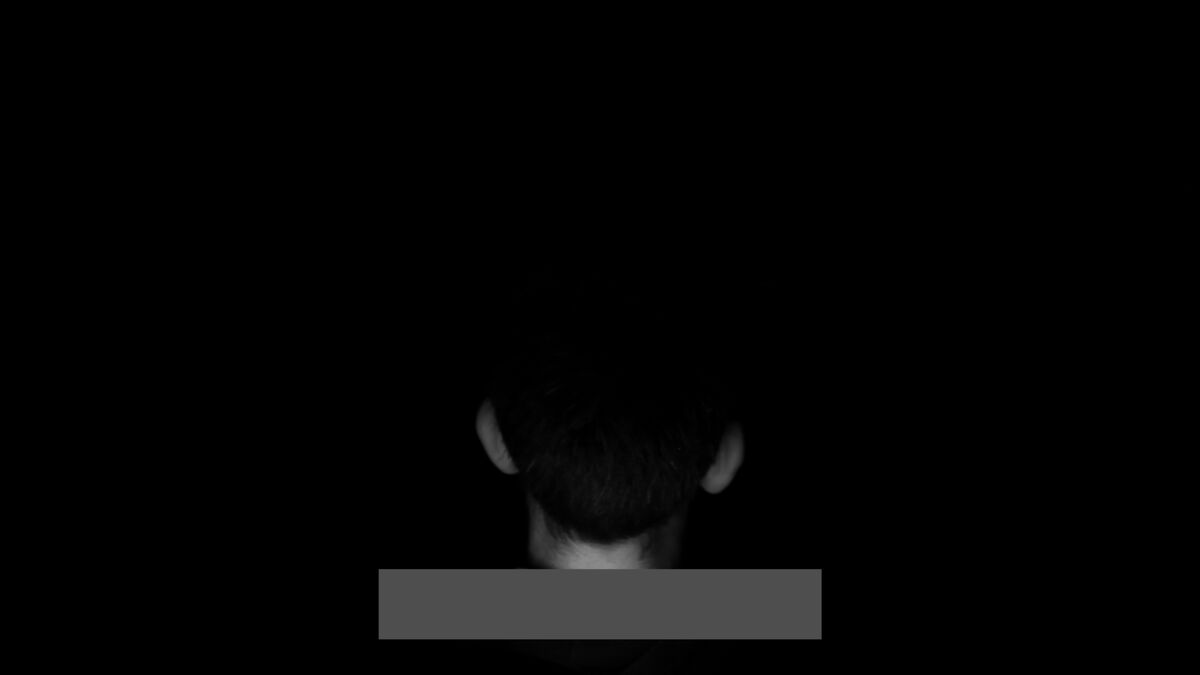 Haro Cumbusyan’s eye has always been directed toward moving-image art, a facet of collecting where he and his wife, Bilge Ogut-Cumbusyan, have promised to avoid becoming “noise traders,” as he put it. “We thought there was a gap in the market for film, video, and digital works because artists clearly wanted to experiment with time-based media and curators were very interested in showing those works, but most established collectors were skeptical about their collectability,” Cumbusyan added. “So even with our modest budgets, we thought there’d be a role for us to play in supporting the production of works that might be deemed important in the future.”
Since then, Cumbusyan has become an outspoken advocate for the private acquisition of video work, a medium he sees as accessible to a wide range of collectors. As the founding director of collectorspace and a member of the selection committee for LOOP, Cumbusyan tracks developments in moving-image art through a range of resources, from institutions to galleries to fairs.
When thinking about acquiring new work, "the ideal situation is when a curator I respect presents an artist to me looking for support for an upcoming exhibition or a new commission,” Cumbusyan said. “That gives me access to the most promising artists and their works. My next favorite source is biennials, but when I see an extraordinary work in a major biennial, it’s usually too late for me to acquire it,” he continued. “Biennial works get picked up very quickly and command a premium price, so when I come across show-stopper, I look for the artist’s older works that sometimes are as strong, but not so much in the spotlight.” 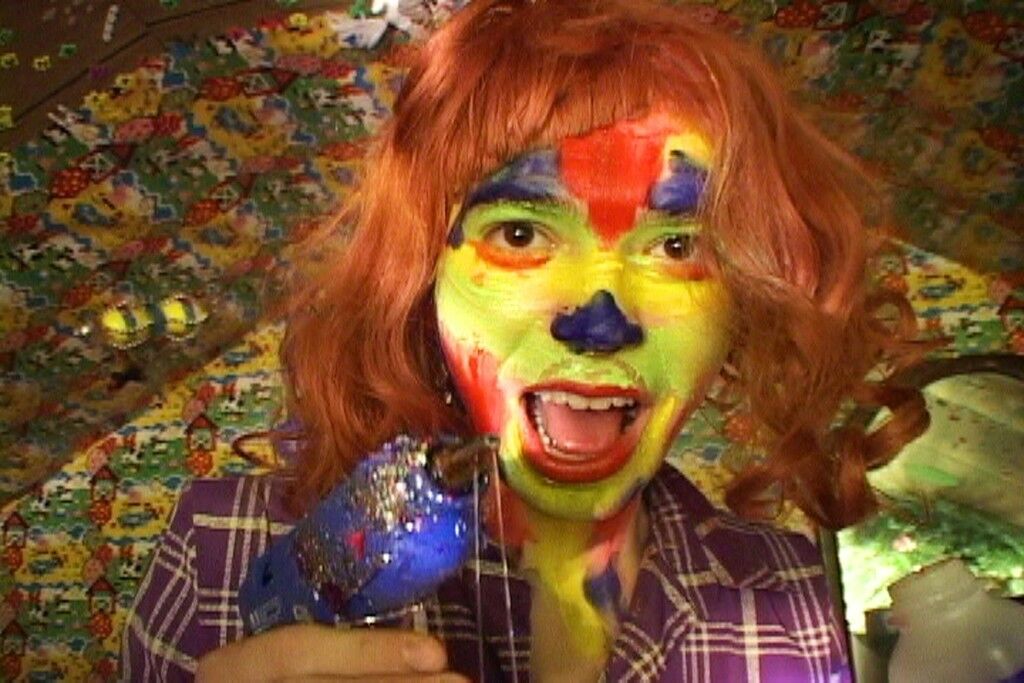 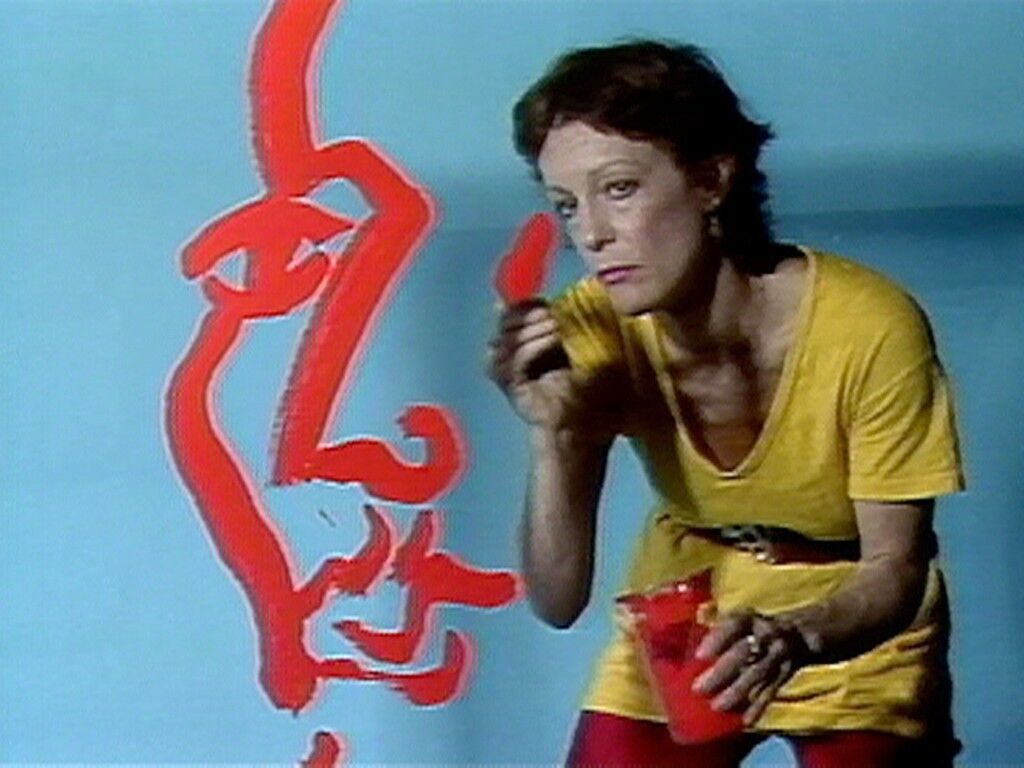 Joan Jonas
Double Lunar Dogs, 1984
Electronic Arts Intermix (EAI)
Lori Zippay has been with Electronic Arts Intermix (EAI) since the mid-1980s, when she founded its preservation program. The nonprofit was one of the first to focus on the distribution and preservation of video and moving-image work, and it has pioneered the research and implementation of archival methods since then. Historically, EAI has worked primarily with artists and institutions. More recently, however, Zippay has noted a growing interest from private collectors in her organization’s guidance.
“If you’re interested in contemporary art, you must be engaged with the moving image—it’s so pervasive at this point,” she said. “In the past, there was some hesitation because art based in technology seemed more variable. It does perhaps have more questions around its display and preservation, but because it’s become so much more part of the landscape of contemporary art, more collectors feel comfortable engaging with it.” 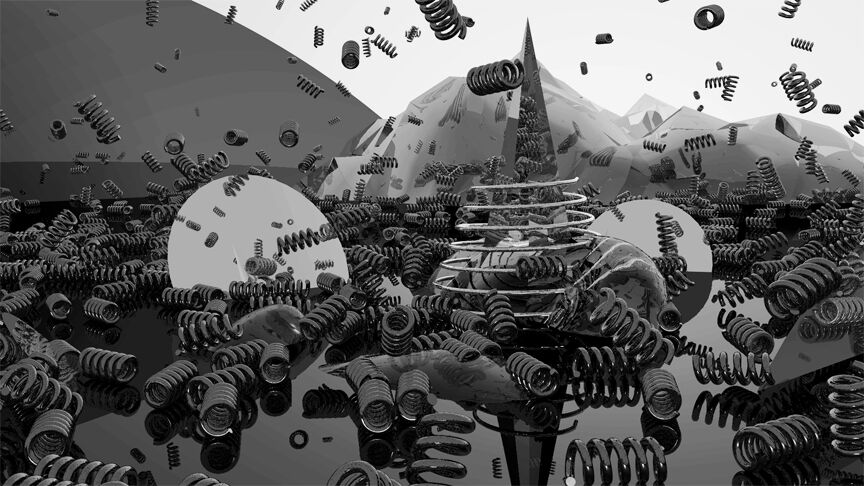 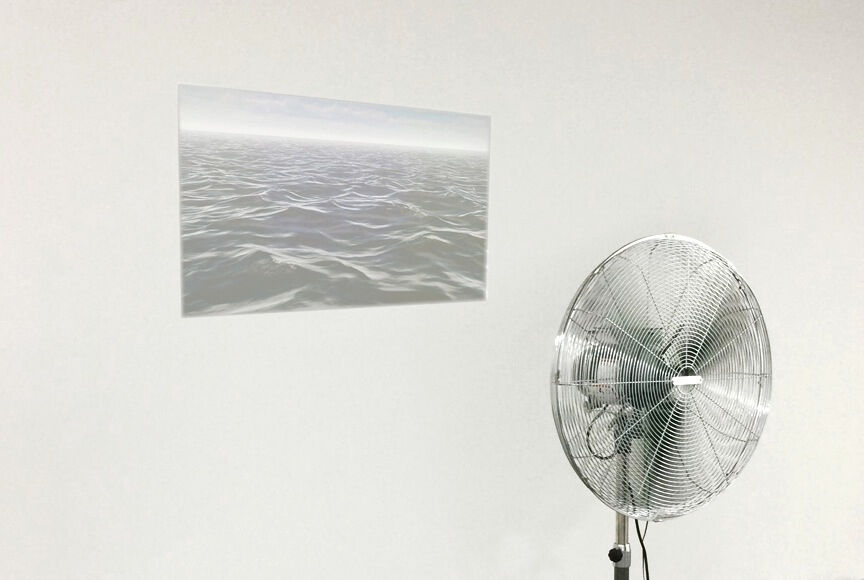 Kevin Reuning
Scenic Vistas, 2015
Microscope Gallery
In 2010, after curatorial stints at Galapagos Art Space and Lucca Film Festival, respectively, Elle Burchill and Andrea Monti opened a gallery devoted primarily to moving-image work. Walk into their Brooklyn space, and you’re often introduced to artists, artworks, and sometimes even mediums you didn’t know existed.
In Kevin Reuning’s current installation, for instance, 3D animation tools have inspired paintings and sculptures that look more like moving images than the traditional mediums they are constructed from, while his HD video Spiral (2015) shows a cascade of geometric objects derived from the default shapes offered by Cinema 4D software.
The first few years were slow, but Microscope’s collector base has since grown, along with the square footage of the gallery. “In the past year, or even less, more collectors have been realizing that we’re a resource for this type of work, and people are approaching us to buy their first video or film—these are people who’ve never purchased a moving-image work before,” explained Burchill.
Monti added: “This is the time that things are changing. We’ve been around for almost five years and have seen a shift—more collectors are finally expanding their collections to incorporate video and moving image.”
Alexxa Gotthardt
Explore LOOP Barcelona 2015 on Artsy.
Related Stories