How to Look at Cy Twombly after Zombie Formalism 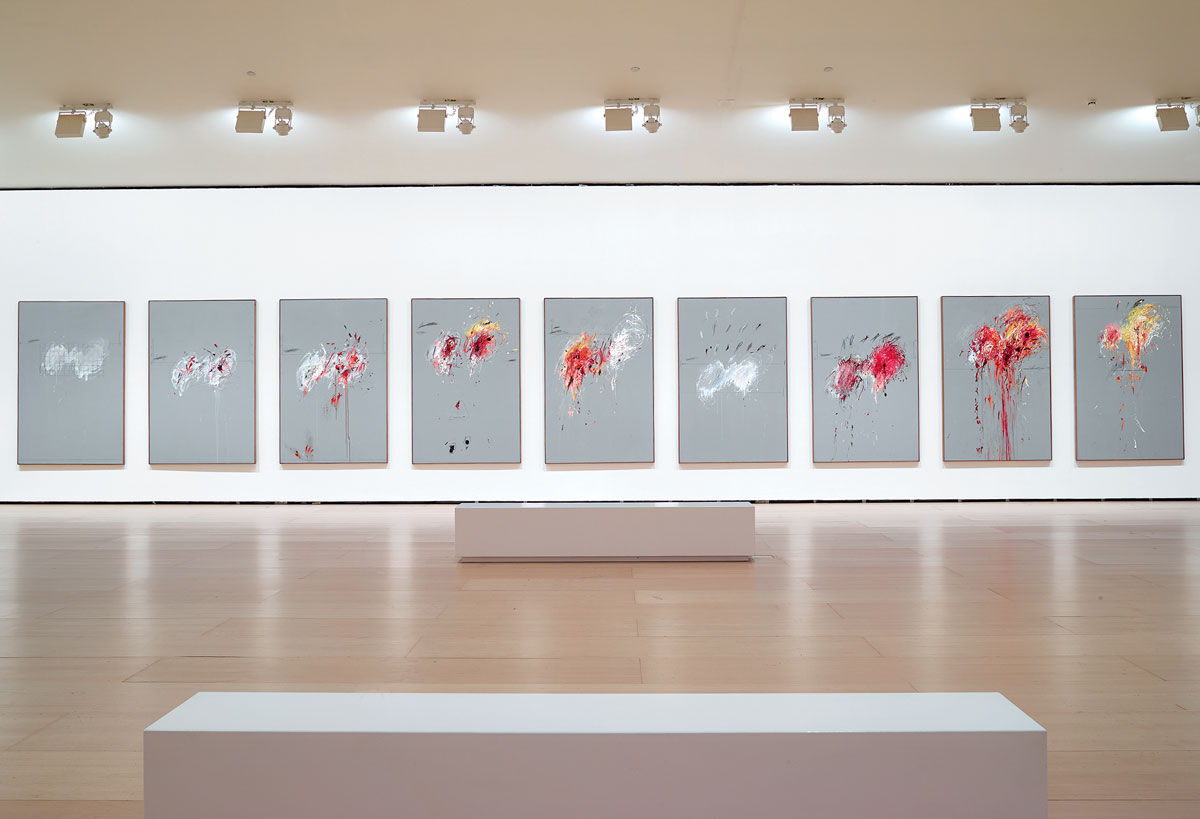 Over the past year, there have been a number of exhibitions lauding historical abstract painters. In London, we’ve had the Royal Academy’s big
Abstract Expressionism
show, while in the U.S. there were retrospectives of work by
Carmen Herrera
and
Agnes Martin
, as well as a survey of female Abstract Expressionists, to name just a few. But in the wake of several years of process-led abstract painting by young artists who have struggled to maintain momentum and innovate in the face of market speculation—in other words, Zombie Formalism—have we come to see the historical icons of abstract painting differently? The
Cy Twombly
retrospective at the Centre Pompidou in Paris proves to be an interesting location to reexamine the mid-century kings of abstraction.
On the top floor of the Pompidou, the exhibition brings together three of the four central cycles of Twombly’s work—from 1963, 1978, and 2000 until his death in 2011. The show includes famous paintings, but also drawings, sculptures, and lesser-known photographs—which are also presented in the artist’s signature series format. The works begin in monochrome in the 1950s and end in furious neons at the end of the artist’s life.
What becomes apparent looking at this large show is Twombly’s influence on his contemporaries and successors. There is a strong conversation, for instance, between the work of Twombly and that of his friend and fellow
Black Mountain College
alumnus
Robert Rauschenberg
. Like the latter, Twombly used household paint and everyday materials in his early work. The text, scrawls, and scribbles of
Basquiat
might also have looked entirely different without Twombly as his predecessor. As Nicola del Roscio, president of the Cy Twombly Foundation and long-time collaborator and archivist of the artist’s work notes, “Twombly was always highly respected among intellectuals, especially poets, writers, and musicians. They all called him an underground star and thought he was ahead of his time by at least 20 years.”
Twombly’s retrospective comes in the midst of a flurry of attention around the artist. Four books relating to him and his work have been or are soon to be released, including a thoughtful photographic tome of
Sally Mann
’s portraits of the artist’s home and studio in Lexington, Virginia, and an academic treatise by Mary Jacobus, titled Reading Cy Twombly: Poetry in Paint, which explores his engagement with text and art history. Gagosian Gallery in Paris has also mounted an exhibition of his work, which will be on view until February 17, 2017. It focuses on a group of works that are concerned, as Gagosian London director Mark Francis told me, with various aspects of the myth of Orpheus, who represents the figure of the artist. Most of the works have not been seen for 30 years. 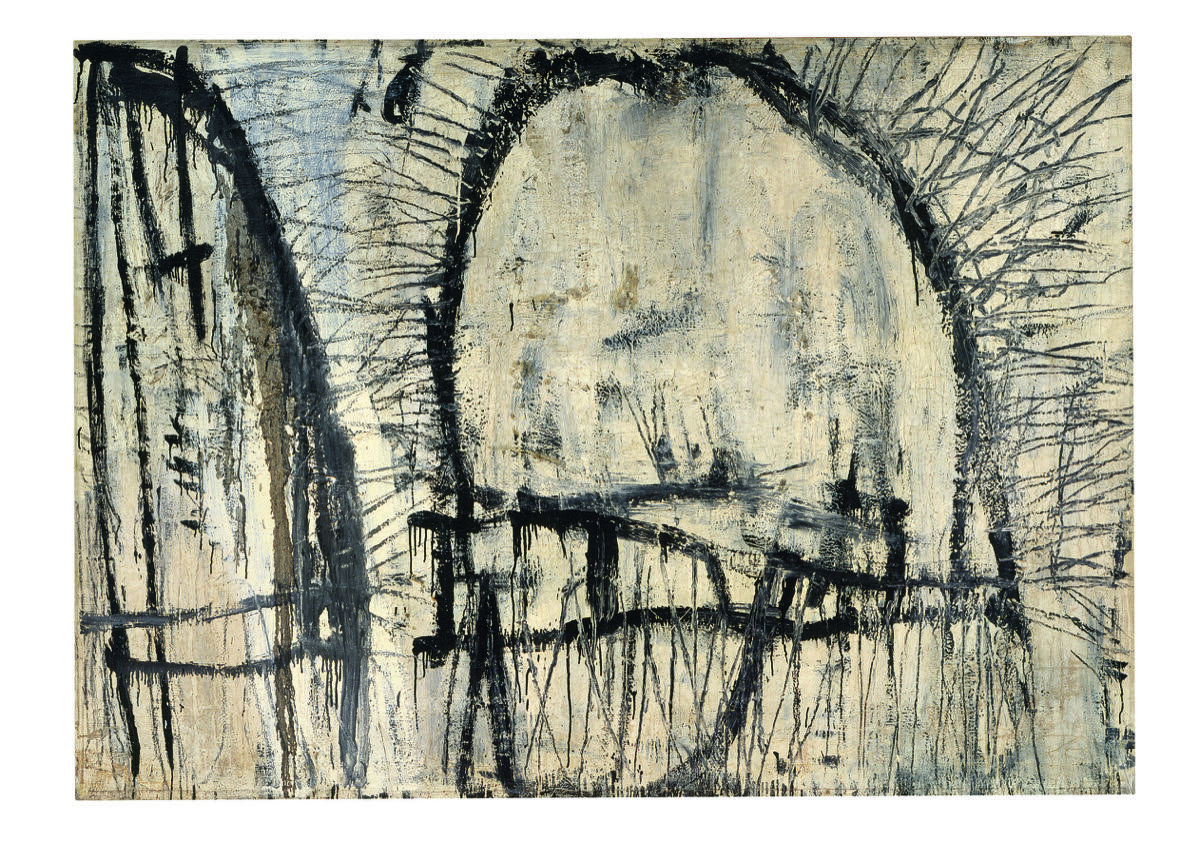 12 Images
View Slideshow
The serial format that Twombly employed has been rather overused by artists in recent years. Walter Robinson, the artist and critic who popularized the term Zombie Formalism in 2014, expressed frustration with the way in which the legacy of Twombly and his like filtered into market-ready artworks. So what makes Twombly different from his more recent imitators, aside from getting there first? How can we look at his fascination with materials and his works in series free from the fog of contemporary market abstraction?
“The ‘machine’ that makes the art is the idea, and that notion came of age with the Ab-Ex guys, the original [Clement] Greenberg clan,” Robinson explains. “So each Ab-Ex guy had his ‘brand,’ his machine, his idea. For them it stood for a break with the past, a declaration of American triumphalism, an ontological and epistemic exploration.” In Twombly’s case, that meant his signature scribble, which reflected “the human inclination to pull meaning from randomness, to fill empty vessels with meaning,” Robinson says. “For the Zombie Formalists, it is a brand, a machine, a method without meaning.”
It is perhaps Twombly’s references to literature, myth, poetry, and language that most set his work apart from the superficial derivations that followed. His titles and imagery refer to ancient myth and art history, from Apollo and Venus to
Poussin
and the
Mannerists
. It was by engaging with the context of history that the artist gave his work great depth and political dimension.
“Cy often spoke through metaphors in his paintings. For example, the cycle of Commodus paintings implies his emotional response to the assassination of Kennedy,” del Roscio explains. “He used the metaphor of the violent Roman emperor who, frustrated about being unable to be creative, found solutions to problems through murders. Some of his cycles of paintings, like those focusing on Bacchus, describe the horrors of war, like the recent one in the Middle East.”
Twombly’s work carries a visceral punch, a sense of the violent, and an impulse to connect with the past. For fans of his painting, the Pompidou show is a beautiful summation. The works that stand out the most are those that refer to gods, such as a pair of compositions in which the scrawled name of the Roman god Apollo, in blue, above a list of other Olympian deities, is positioned alongside one in which the name of Venus is scrawled in red, with a list of female nymphaea and lesser goddesses beneath. You can feel the artist grappling with the past, like an academic trying to unlock the meaning of history. The results are poignant, emotive, and free.
Francesca Gavin
Related Stories