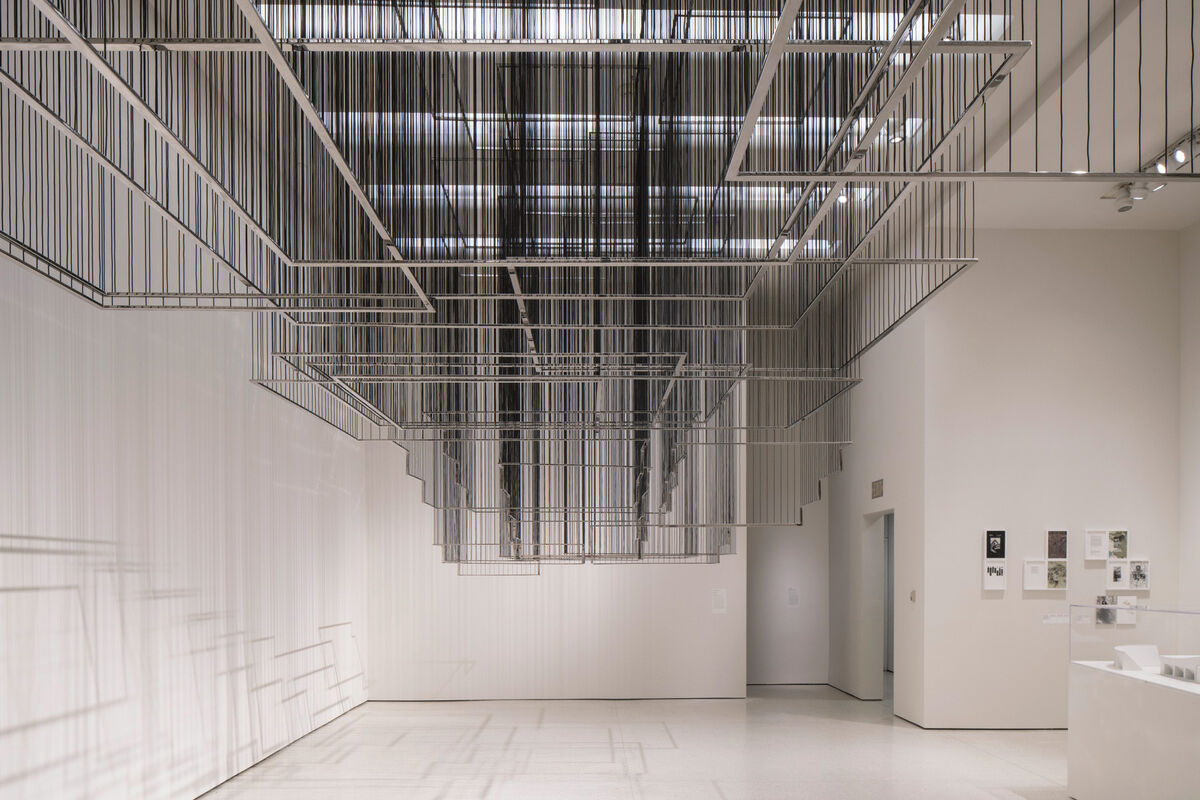 Installation view of Nadia Kaabi-Linke, Flying Carpets, 2011, and Ala Younis, Plan for Greater Baghdad, 2015, at “But a Storm Is Blowing from Paradise: Contemporary Art of the Middle East and North Africa,” Solomon R. Guggenheim Museum, New York, 2016. Photo by David Heald, courtesy of the Guggenheim Museum.

In 2007, when Abu Dhabi’s government announced its monumental cultural plans for Saadiyat Island in the United Arab Emirates (UAE) capital, including a Middle Eastern branch of the Guggenheim, critics attacked the Gulf nation’s desire “to import culture rather than cultivate it.” Construction delays then fueled the fire, as did claims about the institution’s treatment of laborers and the workers’ rights coalition Gulf Labor’s protests at Guggenheim outposts in New York and Venice. The Guggenheim’s board of trustees put an end to discussions with Gulf Labor just a few weeks ago.
All this on a site where ground has not yet been broken, making the Guggenheim Abu Dhabi something of a conceptual museum, rather akin to the Cloud—the terabytes are there, but they’re somewhere else in the ether. Still, the Guggenheim coming to Abu Dhabi is a big deal for a number of reasons. “It has the opportunity to be a pioneer for its time, rather than reshaping an already existing institution,” says Maisa Al Qassimi, programs manager at Guggenheim Abu Dhabi.
In addition to growing a branch of the respected cultural foundation in a region of the world whose art matters and whose cultural practices demand institutional support, the new museum location will neighbor two other cultural powerhouses: Dubai and Sharjah. “The Guggenheim Abu Dhabi adds another layer to our art scene,” says Yasmin Atassi, director of Dubai’s Green Art Gallery. “I think that we can gain a lot from international museums and at the same time, they can gain a lot from us.”
Though in gestation, the Guggenheim Abu Dhabi is active in terms of local public programming and acquisitions. A small sampling of its wares was exhibited in a pre-opening exhibition, “Seeing Through Light: Selections from the Guggenheim Abu Dhabi Collection,” in 2014, alongside Abu Dhabi Art. It was a welcome presentation of work by artists from East and West, but across the pond, reverberations could not really be felt.
Today, however, several events suggest the impact that the Guggenheim will make both within the Middle East and beyond. A 2015 retrospective for Iranian artist
Monir Shahroudy Farmanfarmaian
aside, acquisitions continue to take place in a robust manner—not just for the Guggenheim Abu Dhabi, but also for its New York flagship. “To be an international organization, a museum must look beyond Europe and the U.S.,” says Sara Raza, the New York museum’s UBS MAP Curator for the Middle East and North Africa. 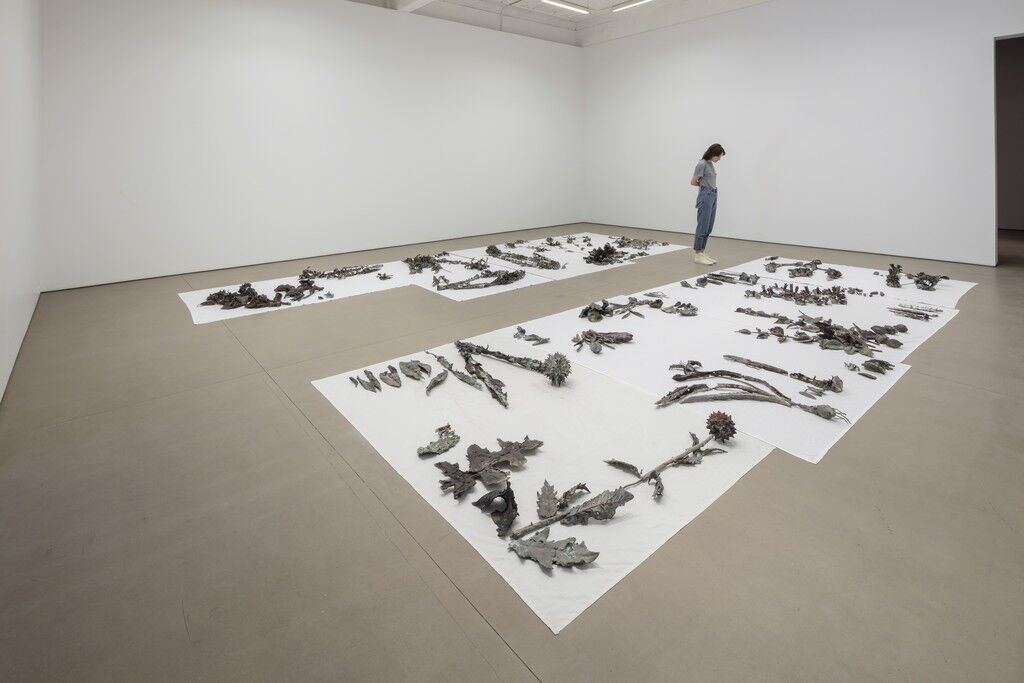 Abbas Akhavan
Study for a Monument (2013–15) , 2013-2015
"But a Storm Is Blowing from Paradise: Contemporary Art of the Middle East and North Africa" at Solomon R. Guggenheim Museum, New York 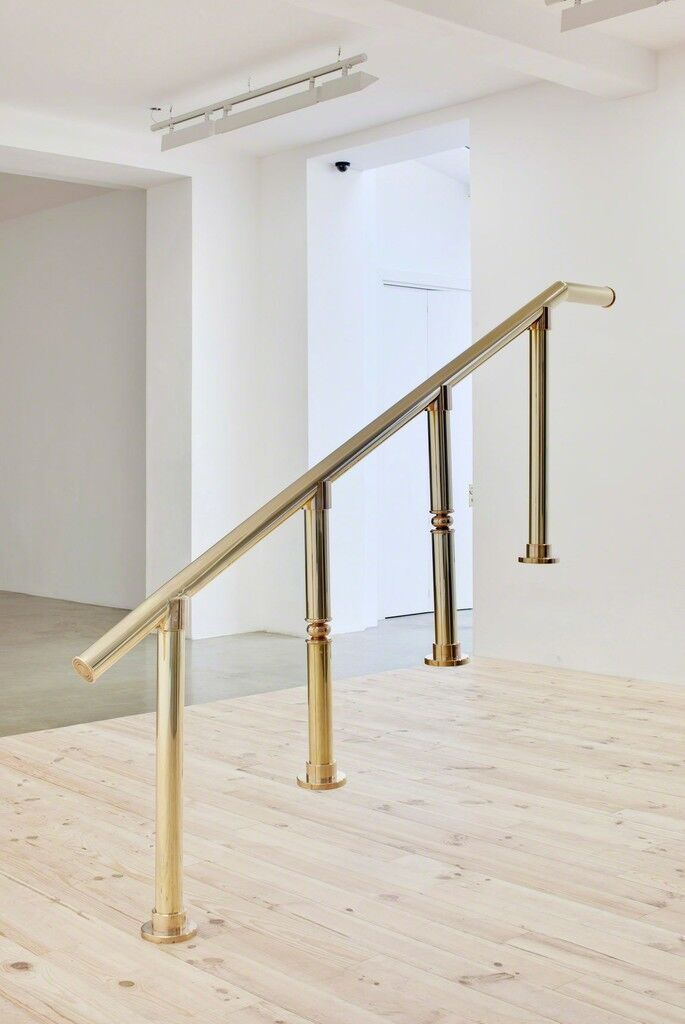 Hassan Khan
Bank Bannister (Banque Bannister), 2010
"But a Storm Is Blowing from Paradise: Contemporary Art of the Middle East and North Africa" at Solomon R. Guggenheim Museum, New York
Raza’s recently opened show at the Guggenheim New York, “But a Storm Is Blowing from Paradise: Contemporary Art of the Middle East and North Africa,” which will travel to Istanbul’s Pera Museum in 2017, will also no doubt add several layers to conversations surrounding art from the region. She approached the show, she says, in a non-didactic manner, looking at the region’s geopolitics and focusing on ideas of origin, architecture, and science. In line with this, acquisitions were made. “The permanent collection was founded on the principles of art of our time, and art of abstraction, and not geographical specificity,” says Raza, “I hope that this exhibition is perceived as an ideas-generated international selection that speaks of the current moment, without severing itself from complexity.”
“This isn’t just a show, it’s a permanent statement and it goes beyond our lives,” says Isabelle van den Eynde, founder of her eponymous Dubai gallery, which represents
Mohammed Kazem
and
Rokni Haerizadeh
, both of whose works feature in “But a Storm Is Blowing from Paradise.” For New York audiences, this is an opportunity to discover the social and political concerns driving some of the region’s artists. Raza has carefully and strategically ensured that while the works are contemporary, they also refer to the past. “Artists provide us with critical commentary and another view, largely a poetic one,” she says.
There is a long way to go before the true impact of the Guggenheim Abu Dhabi is felt. In the interim, the public, at least in the Middle East, is generally satisfied knowing that this government-backed institution is busy filling its warehouses with a predominance of West Asian, South Asian, and North African art. “I think we have to be patient because it seems very far away,” says van den Eynde. “I hope they will celebrate the voice of our region. That’s extremely important.” Al Qassimi confirms this: “It will be a platform for celebrating regional art, while presenting it in a broader, international context. It will also support production of new works by artists from the UAE and the whole region.”
Myrna Ayad
Related Stories