I Spent the Night in a Museum, and I’ve Never Felt Closer to a Work of Art 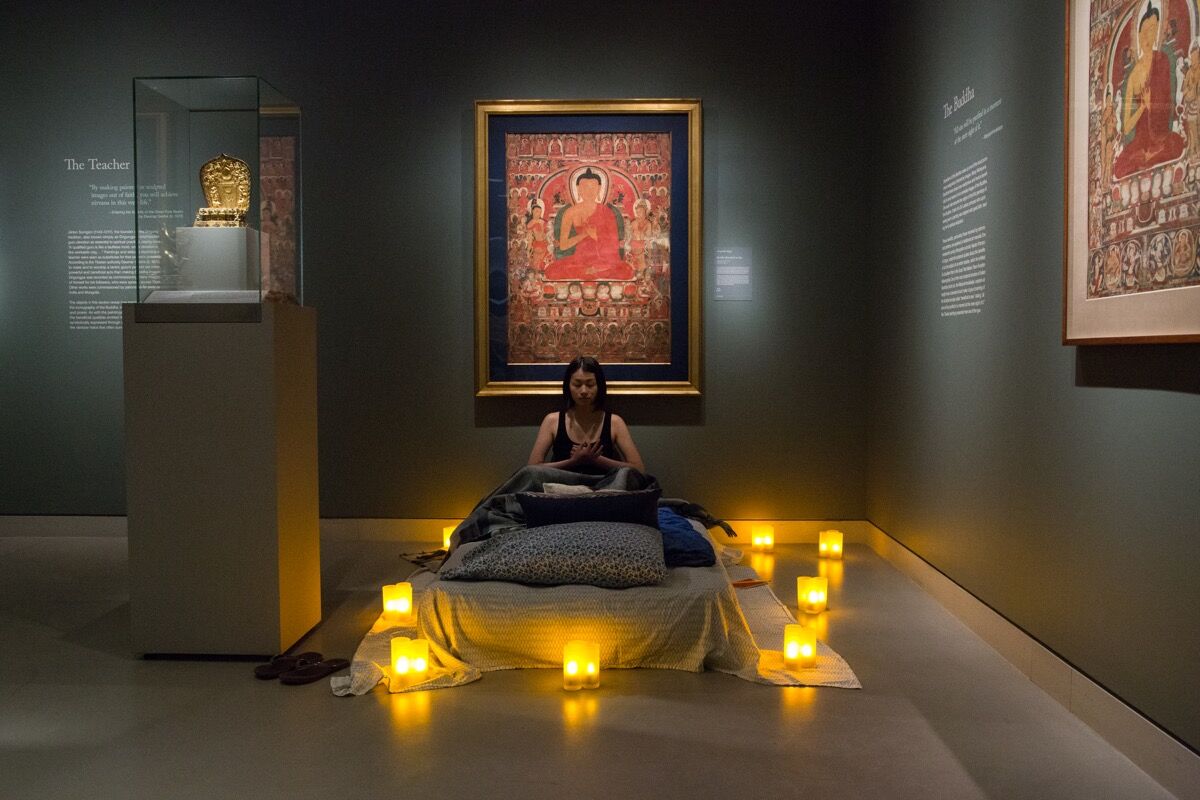 Photo by Lyn Hughes, courtesy of the Rubin Museum of Art.

Around 7 p.m. this past Saturday, I stumbled into a small, dark Brooklyn bar lugging a massive Ikea bag. In it was an odd assortment of objects—an air mattress, a pair of silk pajamas, and a dream journal—that would accompany me on a night I had fantasized about since I was 10. A night, that is, spent in a museum, dreaming under a work of art. (Yes, I was a nerd.)
It’s a fantasy that may have crossed many people’s minds, not only as children but as adults, too: to enter the hallowed, dimmed halls of a museum after hours and stroll amongst its age-old art spirits, maybe nap under the chiseled calves of a Roman god or inside the 2,026-year-old walls of the Temple of Dendur. It’s a dream that has been stoked by charming children’s books (From the Mixed-up Files of Mrs. Basil E. Frankweiler) and box office gold (The Da Vinci Code, Night at the Museum, Les Amants du Pont Neuf). So when I got wind of an opportunity to sleep over at the Rubin Museum, I signed right up.
The event is called Dream-Over and it’s billed as a night to make the Rubin—an institution brimming with ritualistic art forged in Himalayan Asia (including Nepal, Tibet, and India)—“the place of your dreams.” I was ecstatic. So after a nightcap at the bar, I hopped onto the subway and made my way to the museum, changing into my pajamas in a cafe commode along the way. When I arrived, other “dreamers” were sticking name tags onto fleecy onesies and being led to the artworks that would effectively become theirs for the night.
A week prior, I had filled out a survey, delivered via email from the Rubin. The questions ranged from mundane to heady: “Why are you attending Dream-Over?,” “What color resonates most with you?,” and, the whopper, “What are the three most important experiences in your life?” The answers would serve to match me with my artwork—my new nighttime companion.
Jeremy, a serene, smiling docent wearing plaid pajama pants, walked me to the fifth floor, which houses Nepalese devotional art. “Don’t tell anyone else I said this, but it’s the best floor,” he whispered. “I spent a lot of time in Nepal. You got lucky.” As we strolled over to a far corner of the gallery, my eye caught a spellbinding painting—a god with three eyes, countless heads, and even more arms locked in passionate embrace with his lover. I was coveting it already; I knew it was mine.
“That’s one of our best tantric paintings,” Jeremy explained offhandedly, as he caught me ogling. But we breezed by and landed in front of a small gold Buddha. My disappointment didn’t last long. He was delicate and tranquil and radiant all at once; a diaphanous robe clung to his body (Jeremy noted that scholars refer to this style endearingly as a “wet shirt Buddha”). And while I don’t consider myself a particularly spiritual person, there was a definite spark. 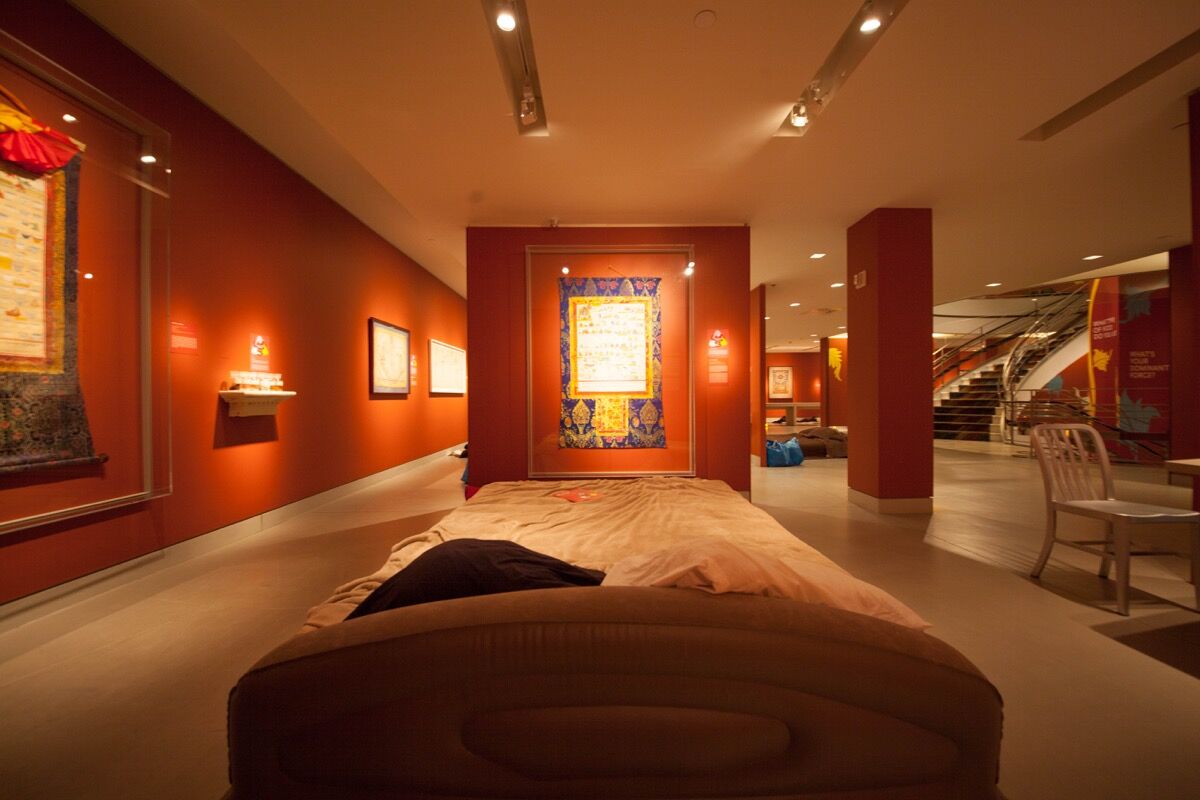 Photo by Max Gordon, courtesy of the Rubin Museum of Art.

The night kicked off with a conversation between Vanessa Sinclair, a psychoanalyst with an interest in art, spirituality, and the occult, and Khenpo Lama Pema Wangdak, a Buddhist Lama originally from Tibet. They discussed dreams and how the environment of the Rubin—a shrine to creativity and spirituality—might affect our unconscious activity over the course of the night; how art might just be able to unlock chambers of our subconscious, if we were open to it.
“The main thing is, you will yourself to dream,” explained Lama Pema. “Tonight, you might go to sleep and imagine the universe as a pure, translucent light. Over your head, you have your babysitter, which is the Buddha. You’re the baby,” he laughed. “And you’ll have the most peaceful, satisfying, curled-up kind of dream, because you’ve willed it. That’s the most important thing.” He spoke with a smile, chuckling softly as he made Buddha jokes, as when he referred to the “Buddhaverse,” a portmanteau used to describe an enlightened dream space.
The concept of willing a dream is a compelling one. It’s something I’d tried before, not for spiritual or psychoanalytic reasons, but to tap into new sources of creativity—to experience trippy, transportive dreams. But I’d given up after a few attempts. That night, though, I found myself in a circle of people (which one funny dreamer referred to as a “metaphysical AA meeting”) setting dream intentions. Some were there to connect with a specific energy or person, or simply to experience a deep, peaceful sleep. Others hoped to unclog creative blocks or just have an adventure.
After a midnight snack, the 85 dreamers (among them, a former U.N. employee, an art teacher, a psychologist, and a science writer) curled up in sleeping bags under paintings, sculptures, and shrines across the museum’s six floors. As I drifted off to sleep under my 7th-century Devavatara Buddha, Savannah, a docent, came over to read me a bedtime story. The last sentence I remember went something like this: “His movement was like a galaxy orbiting an atom.” Not a bad way to enter into the dream world.
At 6 a.m., one of the dream gatherers (artists and psychologists tasked with waking us up and talking us through our dreams) whispered in my ear, asking me if I’d dreamt. I’d gone surfing the previous morning and often have ocean-filled dreams the night after, ones where I spend the whole night out at sea. But the version that I experienced at the Rubin was a little different. This time, a wave carried me softly to shore. My dream gatherer reminded me that my Buddha represented a “return to earth,” suggesting that maybe there had been a connection between this sculpture and the deep recesses of my mind.
I’m a romantic and wanted to believe it. But no matter what sort of subconscious synchronicity, if any, I experienced during my night at the Rubin, I have never felt closer to a single work of art. That will stay with me, even though my Buddha will remain in a corner of a museum that I once called my bedroom for a night.
Alexxa Gotthardt
Related Stories