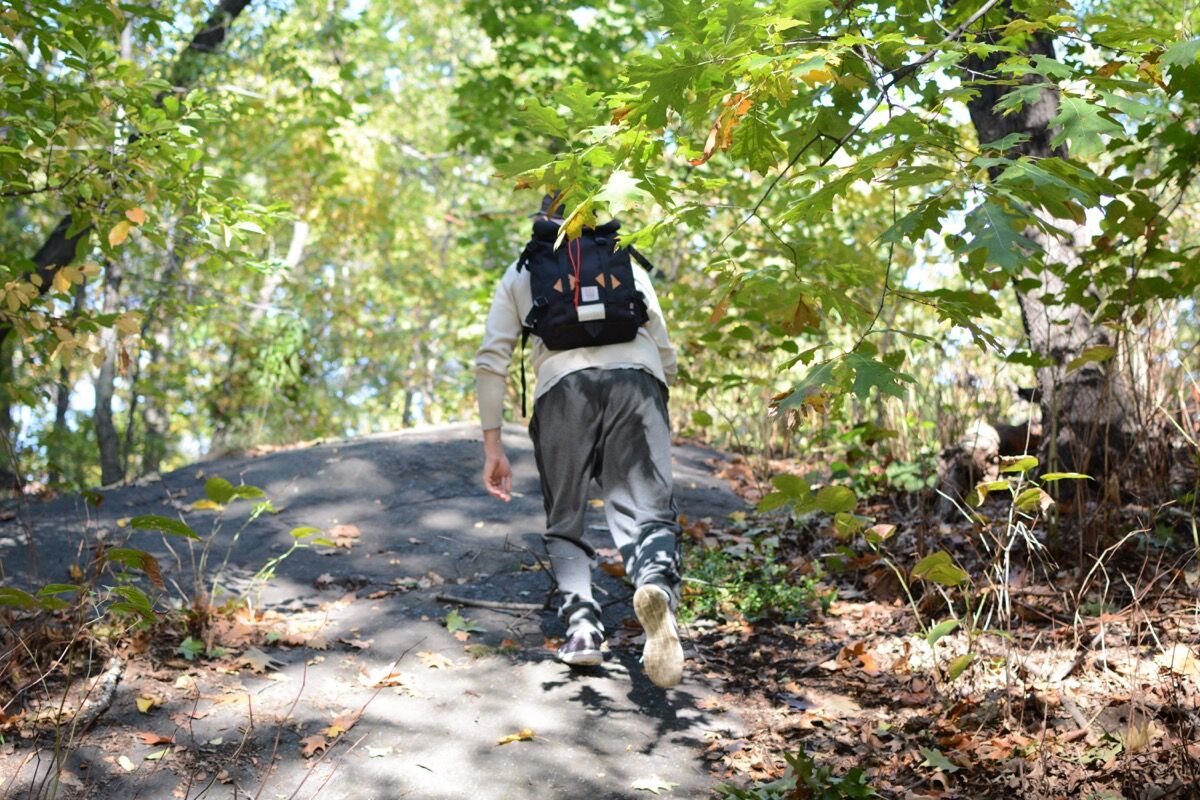 Last Wednesday afternoon, I wandered somewhat nervously through a thick wood in Central Park. I was looking for
Brad Troemel
. Half an hour before, I had entered the park with the young, Brooklyn-based artist on what was the eve of the opening of “Freecaching,” his newest show at Tomorrow Gallery, for which he has hidden 15 of his artworks throughout the park. He was in the midst of tracking down one of these works when I lost him.
Just minutes after meeting by a duck pond, our hunt commenced with a short, brisk walk. Troemel directed me to the first work easily: Out of a prickly bush he lifted a small package of plastic and tape. The second work, however, proved more difficult to pin down. As we ambled through a thicket of brush, Troemel scanned the landscape for the hollow tree stump where he’d hidden a painting. “I’m doing this from memory,” he said, pulling out his iPhone, “but we could resort to using the coordinates.” We tried our luck with GPS.
After circling the area a few times, he decided to shed the dead weight—his backpack and me—so as to take a more agile approach. Telling me he’d “holler” when he found the work, Troemel swiftly disappeared down a hill. Not long after, he called my cell and told me to follow in the direction he had departed. Fifteen minutes, three texts, and a missed call later, I still hadn’t found him. His phone died.

The idea of hiding artworks in the park came to Troemel over the summer while staying at his grandparents’ house in Aurora, Illinois, where he first started using the Geocaching app. Popularized some eight years ago, Geocaching is a recreational scavenger hunt app that allows users to hide and seek objects on public property via GPS technology. At the time, like many artists, Troemel was wrestling with the scarcity of affordable space in New York. He was switching between AirBnB-ing his apartment to pay for his studio and subletting his studio to pay for his apartment, where he was storing his inventory of artworks. Geocaching offered a solution.
In the weeks and months prior to the show, Troemel ventured through Central Park on several scouting trips, locating spots where artworks could be tucked away, hidden from oblivious passersby. He took works from his inventory, dating from 2013 to 2016, and carefully packaged paintings and sculptures in vacuum-sealed plastic, safeguarding them against the elements. As he hid each work, he recorded its GPS coordinates, which are the crux of complementary artworks that hang at Tomorrow Gallery. These puzzle-like wall-hangings are made from three-sided wood blocks that, once decoded, reveal the GPS coordinates and a photograph of the hidden work. On the other two sides one will find a contract for the work with Troemel’s signature and a colorful pattern. GPS coordinates for a few of the works have been made public in the gallery, giving visitors the option to seek out the adventure for themselves. Advertisement
“Freecaching” follows Troemel’s practice of developing conceptual bodies of work that take on new forms of fabrication, often while humorously taking inspiration from online platforms, like DIY tutorials on Pinterest or contraband purchased on the Silk Road, an online black market. With fellow artist
Joshua Citarella
, he set up an Etsy shop called Ultra Violet Production House, where they sell kits to create ironic, theoretical objects and installations, such as a tornado shelter that doubles as a ball pit.
“I usually allow for some type of customization, some manner by which the work can change over time,” Troemel explains. “It’s not static.” In the past he has embedded wall-hanging works with psychedelic mushrooms that can be revealed or concealed with sliding frames. And for his last show at Tomorrow, he presented clear panels filled with technicolored synthetic soil (developed by NASA) in which tunneling ants made their home.
Back in the park, I was relieved to find Troemel striding up a dirt path toward me, not far from where we had parted ways. He had found the hidden artwork, but a group of schoolchildren had chosen a spot right next to it as a stop on their field trip. “They’re what the geocachers refer to as ‘muggles,’” Troemel said, gesturing to the kids. He was hesitant to reveal the artwork in the chance they might see it and claim it for themselves, and thus unknowingly disturb the exhibition.
As we waited for the invaders to scatter, Troemel explained his thinking behind the show. “It’s meant to make use of the abundance of space in New York, which otherwise feels like it’s kind of closing in on you, between the price of rent and the constant shuffle of neighborhoods and transportation,” he said. “It’s a bit tongue-in-cheek, because for a single exhibition it’s arguably as much if not more labor to do all of this than it is to live amidst the clutter.”
Were this artistic hide-and-seek done on a larger scale, he says, the benefits could potentially outweigh the legwork. “You could definitely hide stuff everywhere, if you’re willing to saddle up that risk. But you gain all the space in the world,” he said. “It’s an interesting risk-reward calculation for me. Of course, in this case I’m passing that off to the collector or the visitor to the gallery.” 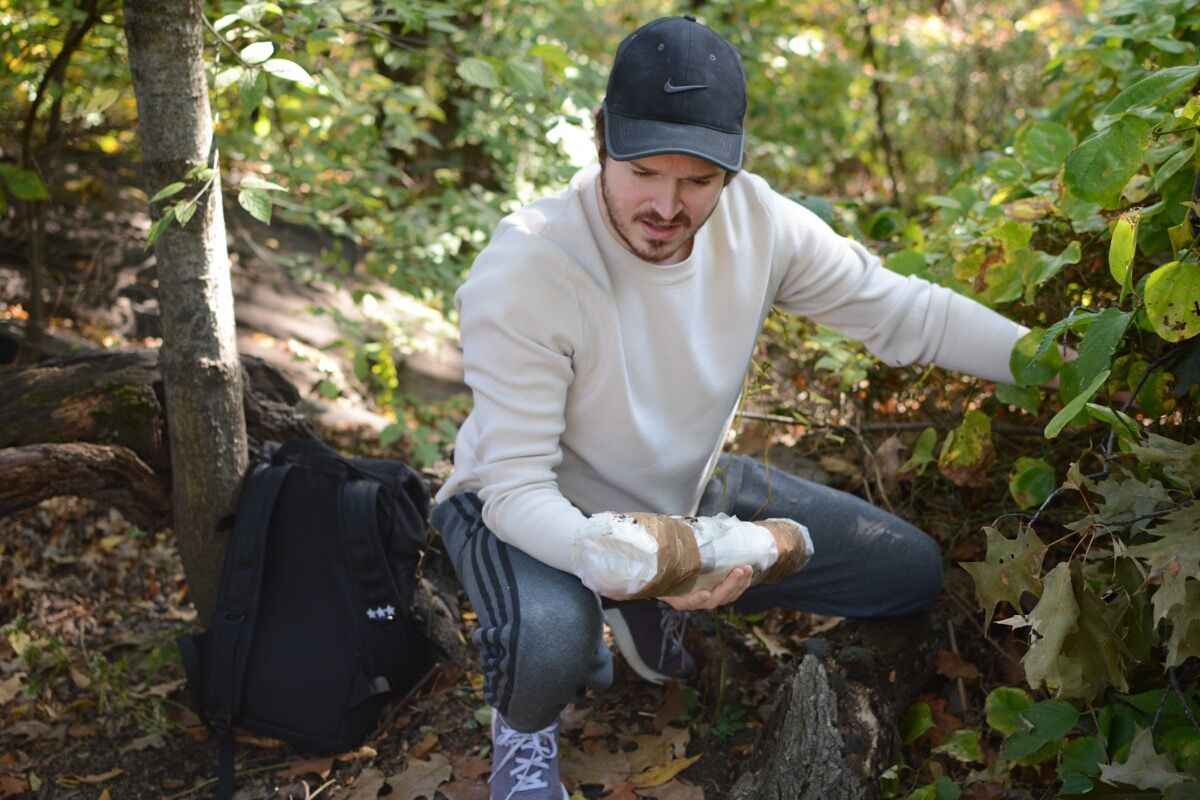 As the children dispersed, we finally made our way to our GPS-verified destination. There, Troemel lifted a small chunk of tree trunk to reveal the treasure: “a painting of two Earth Liberation Front protesters with their hands locked together,” as he described it. Though you wouldn’t know it, looking at the rolled-up plastic package.
Given the difficulty we had finding this work, I asked if Troemel would guide a collector to the work if they purchase it. “I think the process of the person going out and finding it on their own is definitely part of it,” he said. “Part of the positive recreational aspect of Geocaching is getting out into the wild and experiencing nature and having a novel experience of discovery.” That element of discovery—the search—is inherent to the artwork, just as much as canvas and pigment. Just make sure your phone is charged.
Casey Lesser is Artsy’s Lead Editor, Contemporary Art and Creativity.
Related Stories