Ibrahim El-Salahi: The Pioneering Sudanese Artist That You Should Know 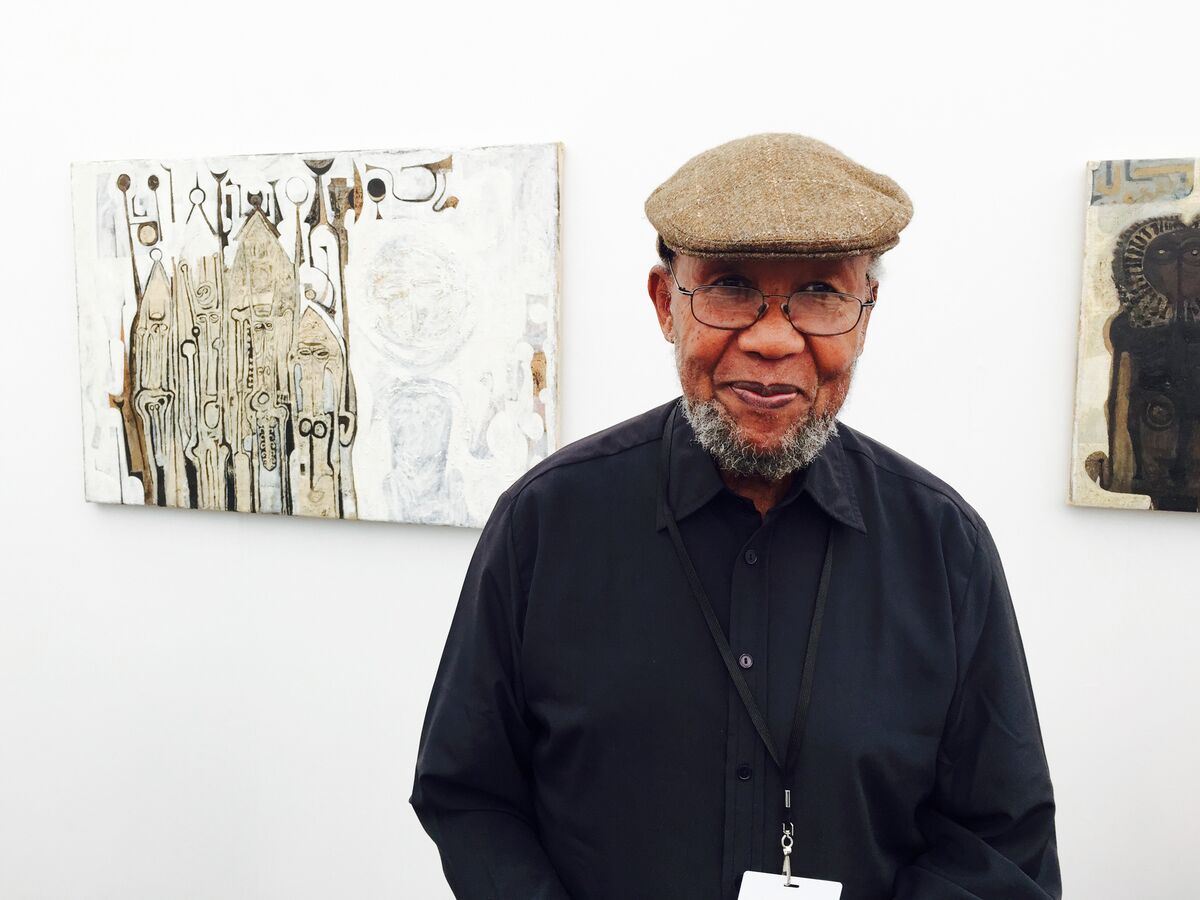 Beginning in 2012 and through 2013, a traveling retrospective of one of the greatest living African artists made stops at museums in Sharjah, Doha, and ultimately, London, disseminating the powerful visual language of
Ibrahim El-Salahi
. The show was curated by Salah Hassan, who recognized the pioneering Sudanese artist’s pivotal role in African modernism—and the constraints of art history that have hindered his significance.

“El-Salahi is arguably one of the most important modern African artists alive,” said curator Elvira Dyangani Ose, who co-curated the retrospective at the Tate with Hassan. “His vibrant, experimental and enduring body of work helped to write one of the most critical chapters of Sudanese art, in particular, and African art, in general.”  But while the show made a triumphal final stop at the Tate Modern (it was the British institution’s first solo show dedicated to an African artist), and a handful of international galleries have shown  the artist, who is now 85 years old, over the past few years (London’s Vigo Gallery has given  him two solo shows since 2014), El-Salahi has remained largely under-recognized in the U.S., perhaps until now.

On Wednesday in New York, nearly simultaneously, Vigo Gallery’s booth at The Armory Show and Salon 94’s Bowery space opened to international audiences, offering the opportunity to drink in prime examples of El-Salahi’s new and iconic works—and to understand his importance firsthand. 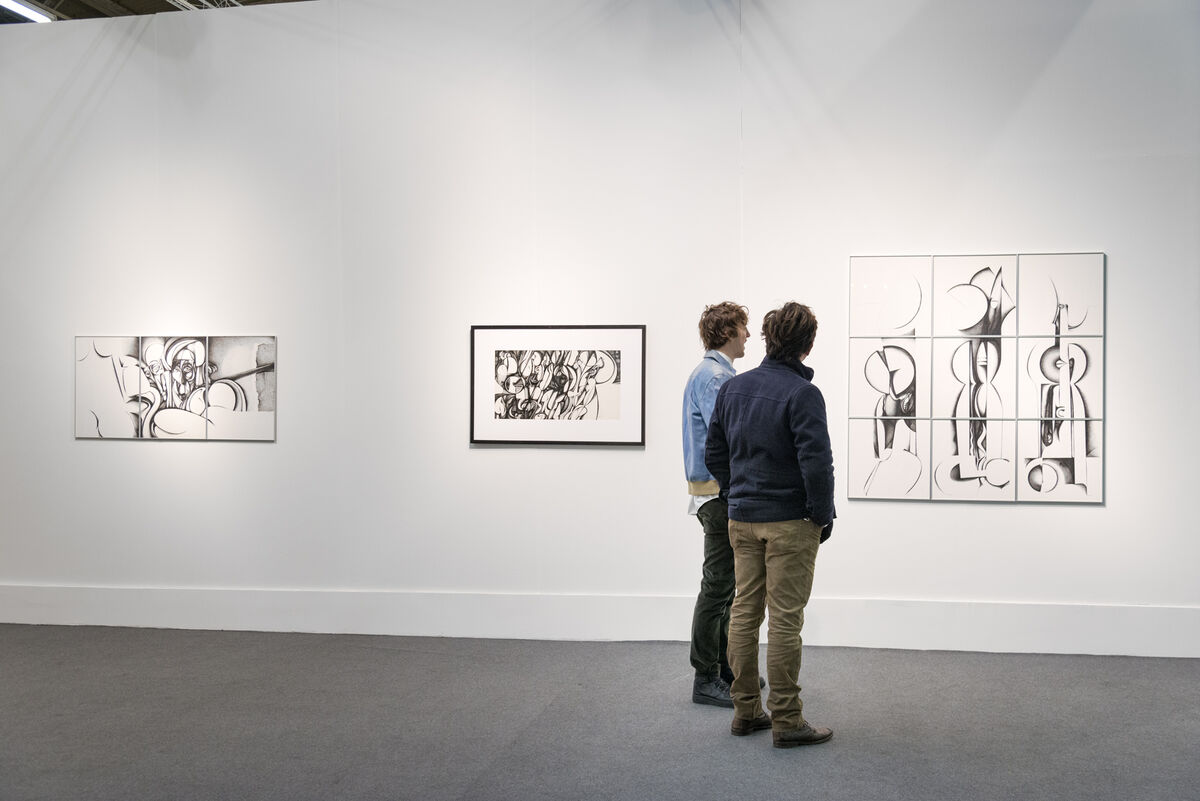 Installation view of Vigo Gallery’s booth at The Armory Show, 2016. Photo by Adam Reich for Artsy.

El-Salahi’s work brilliantly comingles traces of Arabic lettering, Islamic symbolism, and European modernism, each facet evidenced by his early personal history. Born in 1930 in Omdurman, Sudan, to a Muslim family, El-Salahi’s father ran a Qur’anic school, where he practiced calligraphy. His marks in school, which weren’t high enough to study medicine, led him to study art; during college, he won a scholarship to attend the Slade in London, where he was exposed to European schooling, modern circles, and historic artists, like Cézanne and Giotto, who would serve as inspirations. Upon his return to Sudan, he channeled calligraphy and the decorative elements of Islam that infiltrated everyday life into his work, and went on to work at Sudan’s ministry of culture. But his art practice was stalled, in 1975, when he was imprisoned for six months, wrongfully accused of participating in a failed anti-government coup. Frustrated by the political situation in Sudan, he self-exiled two years later and lived in Qatar for over two decades, and in 1998 moved to Oxford, where he continues to live. But despite his itinerant life, El-Salahi is still deeply attached to his roots. “His trajectory was rescued from oblivion by Professor Salah Hassan,” said Dyangani Ose, in a nod to the curator’s dedication to the artist in both his scholarship work and the retrospective, and she added, “but, most importantly, was kept alive due to El-Salahi’s strong belief in his craft and his extraordinary perseverance.” 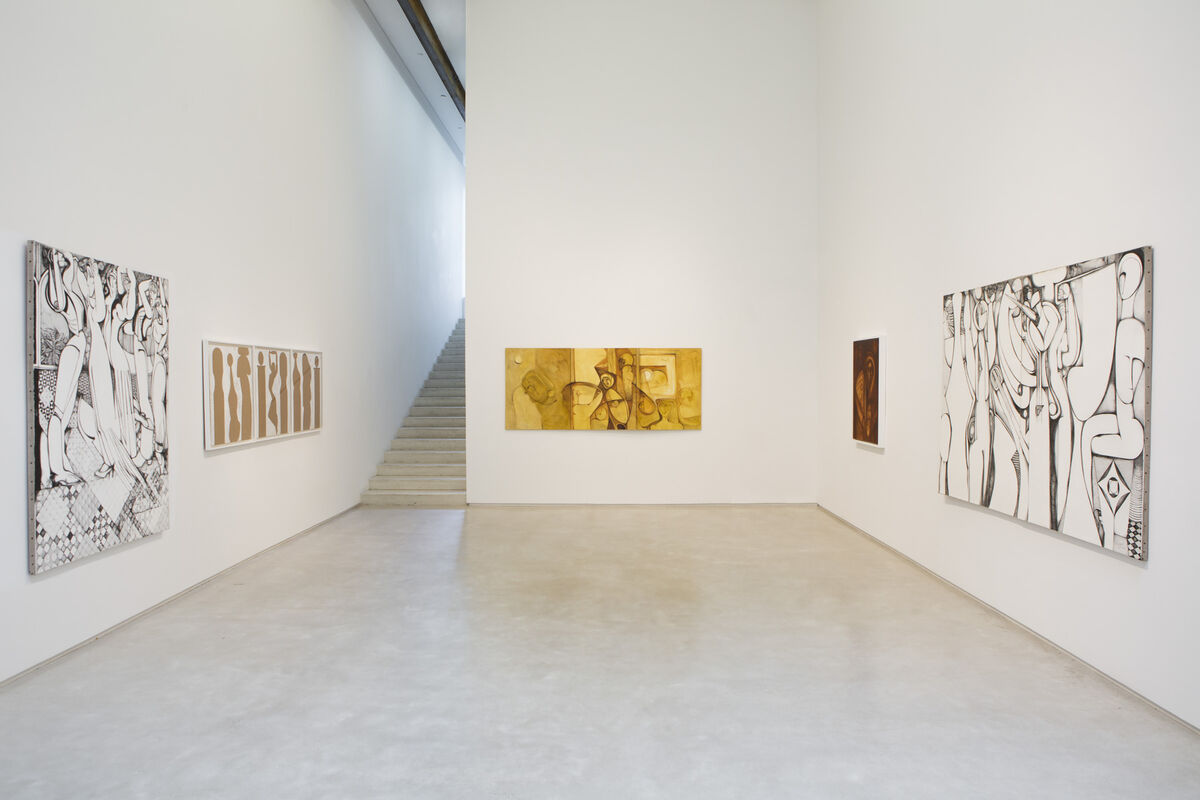 Installation view of “Ibrahim El-Salahi: Alhambra” at Salon 94, New York. Courtesy of Salon 94 and the artist.

Advertisement
At Salon 94, “Alhambra” features a collection of works inspired by the artist’s recent travels in Andalucía; he was particularly taken by Granada and its Moorish fortress complex (which gives the show its name). Dynamic flamenco dancers surface across the show, in exacting ink drawings, spirited silhouettes painted on cardboard, and glowing oil paintings rendered in rich, warm earth tones. The works exude southern Spain’s cultural signifiers, as well as its Islamic roots. “Alhambra” also features The Arab Spring Notebook, now showing in the U.S. for the first time, a book of 46 drawings that El-Salahi made in response to the events of Arab Spring in 2010–2011, one of several visual diaries he has created throughout his career.

Uptown at The Armory Show, Vigo Gallery, situated within the Focus: Africa section, devoted its booth to El-Salahi’s black-and-white series of works dating from the 1960s to the present (the gallery noted that the series is the artist’s favorite). Tiny, intricate markings in pen and ink give way to rhythmic, voluminous forms that dip in and out of figuration and abstraction. Smaller drawings from the early ’60s are filled with symbols and markings that evidence the artist’s deep connection to his Islamic roots, with nods to Arabic calligraphy and mosque architecture. Later works evidence the his  steady artistic evolution, and an unmistakable injection of modernism. The calligraphic forms expand and gain visual weight, often encircling sinuous figures who stare at the viewer with piercing eyes. 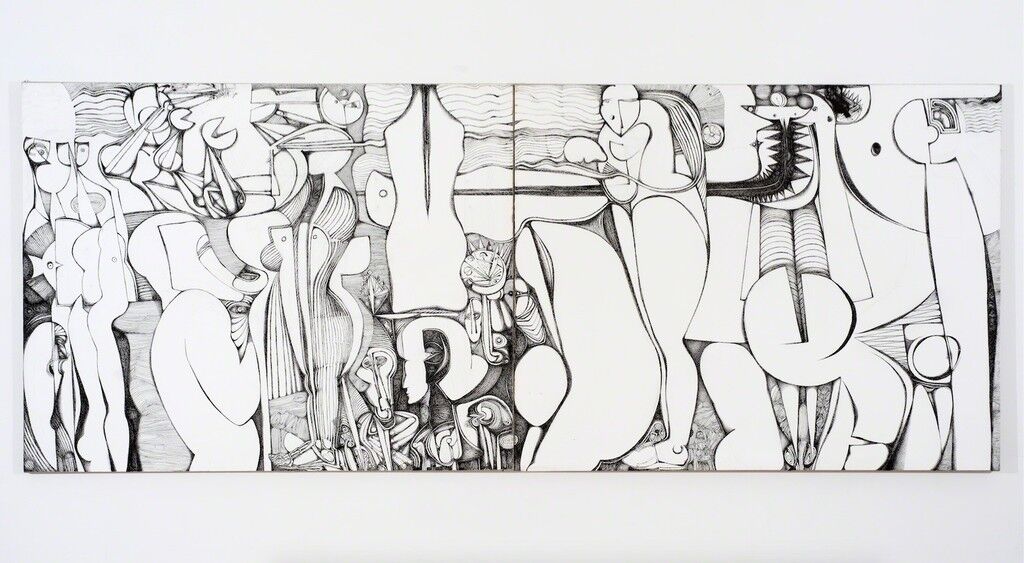 Ibrahim El-Salahi
Reborn Sounds III, 2015
Vigo Gallery
In the centerpiece of the presentation, Reborn Sounds of Childhood Dreams III (2015), symbolism and impeccable skill comingle to stunning effect. The work, which stretches to 121 inches, is the capstone to a three-piece series begun in 1961, the first of which was acquired by the Tate in 2013. “Perhaps to me, the simplest and most indisputable proof of how much the acquisition of Reborn Sounds of Childhood Dreams (1961–65) changed forever art history as we knew it, was the fact that one could no longer visit Tate’s ‘Poetry and Dream’ display and imagine those rooms without that work,” said Dyangani Ose of the museum’s section devoted to 20th century art and the influence of Surrealism. “There is no doubt that El-Salahi belongs to that moment in art history as much as Pablo Picasso, Wifredo Lam, Germaine Richier, Karel Appel, and others.”