This Iconic American History Painting Gets the Facts Wrong 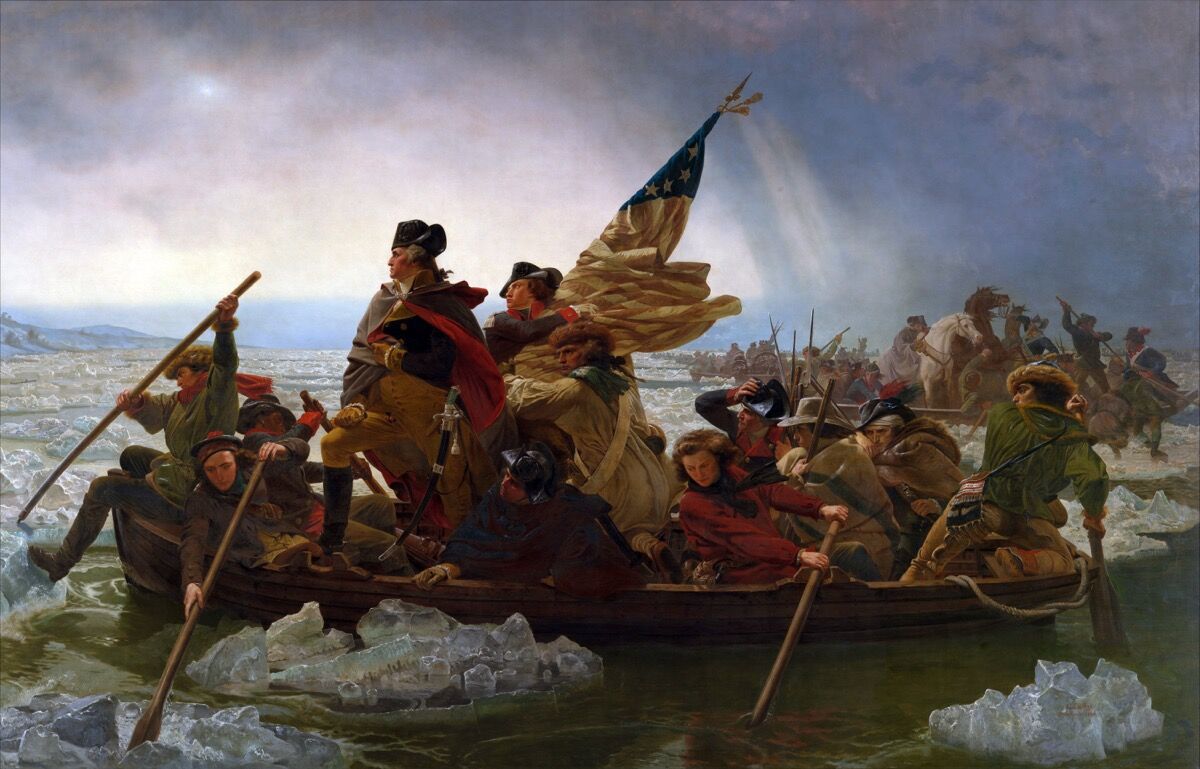 Emanuel Gottlieb Leutze
’s Washington Crossing the Delaware (1851) is one of the most famous works of art ever made. The piece has been endlessly parodied, with everyone from Richard Nixon to Darth Vader taking the pride of place of General George Washington. Leutze’s painting—there are two existing versions, one at New York’s Metropolitan Museum of Art and one at the the Minnesota Marine Art Museum—speaks to the heroic mythology that so many love to ascribe to America’s founding. It is, no doubt, an iconic work of history painting, though while it was masterfully executed, its historical accuracy leaves something to be desired. So what exactly is wrong with the painting?

Well, “wrong” is perhaps a poor choice of words. Paintings aren’t facts, they’re works of art, capable of poetic embellishment. Still, there are a few things clearly off in Washington Crossing the Delaware, with the deviations both a result of Leutze’s physical distance from America—he painted the work in Germany—and the need to ascribe high drama to the moment. And it was, by all accounts, an important one. After being slapped silly by British forces in a series of skirmishes across the Northeast, Washington devised his crossing of the Delaware on December 25–26, 1776, as a way to surprise Hessian mercenaries at Trenton, New Jersey, deal a decisive victory, and take back momentum. And though in retrospect we know that that is indeed what happened, while he crossed the river, triumph was uncertain.
Most obviously, if Washington had been perched on the boat’s edge as depicted, he would have fallen into the icy water and could well have drowned. This is hardly a new revelation. An NPR report from 2002 by Ina Jaffe goes through some of Leutze’s historical flaws, and begins with this most glaring one. It’s not really the fact that Washington is standing up that is incorrect—it’s most likely that everyone would have been standing given that the boat would have been both flat and soaked with frigid water. Rather, it’s his precarious pose that is at issue. Also, while Washington appears as the aged, stately figure that many today imagine, at the time of the battle he was a spry 44, not the elderly, greying man Leutze captures.
Also wrong: the sunlight. Washington led some 5,400 troops across the Delaware in an attempted surprise attack not at the break of dawn but in the middle of the night. He devised two other crossings led by other commanders to occur simultaneously, but those ultimately failed. But hey, the sun casts a beautiful glimmer across the American flag clutched by the figure to Washington’s right, James Monroe—America’s fifth president. Another small problem is that this version of the flag wasn’t in use in 1776, when the crossing took place. It was only adopted around a year later. And the long, wide expanse that the boats are crossing is also off—the real crossing was only a few hundred meters.

The History of Washington Crossing the Delaware (1851)

We shouldn’t be unfairly critical of Leutze. It’s worth recognizing that he did make some efforts at historical accuracy. The painting was born, not out of the American revolution, but out of the European revolutions of 1848. Leutze, a liberal who supported those struggles, looked back to Washington and the American Revolution for inspiration. The moment the artist chose to depict was, despite the ultimately powerful image, one of the lowest points for the continental army. As the European revolutions that propelled Leutze to make the work began to fail, the scene depicted eventually grew more subdued.
Today, a quick Google search tells you almost everything you could possibly want to know about the crossing and then some. But in Leutze’s day, historical accuracy was harder to come by. Leutze hired American tourists and art students to serve as models and assistants (so all the figures are, in fact, Americans), and finished it in 1850. That first painting was badly damaged due to a fire in his studio, and was ultimately destroyed by British bombing during World War II.
Leutze recreated the damaged Washington Crossing the Delaware, and sent the new copy to America in 1851, where it caused a frenzy. Some 50,000 people came out to see it while on display in New York, including a young Henry James, who was permanently changed by the painting (so he said, anyway). During the Civil War, the painting was used to raise money for the Union cause and antislavery movement. Leutze, a staunch abolitionist whose inclusion of an African American in Washington’s boat was intentional, probably found this to be fitting. Though the Washington he so heroically depicted owned slaves, as did Monroe.

Thankfully, we don’t have to imagine a more accurate version of Leutze’s Washington Crossing the Delaware because it already exists. Painter
Mort Künstler
—known for his rigorously accurate historical paintings—made Washington’s crossing his subject in 2011, when he was commissioned to create the painting by now-Democratic congressman and American history buff Tom Suozzi. Künstler notes that he always researches his subjects before depicting them, and when it came to the Delaware crossing he wasn’t aware of all the inaccuracies until Suozzi told him about them. The pair went to the site of the original crossing, now a pair of towns on either side of Delaware, both named, shockingly, Washington Crossing. There Künstler said he spoke to local historians about what the crossing would have looked like. The resulting painting that Künstler created rectifies many of the inaccuracies of Leutze’s original. 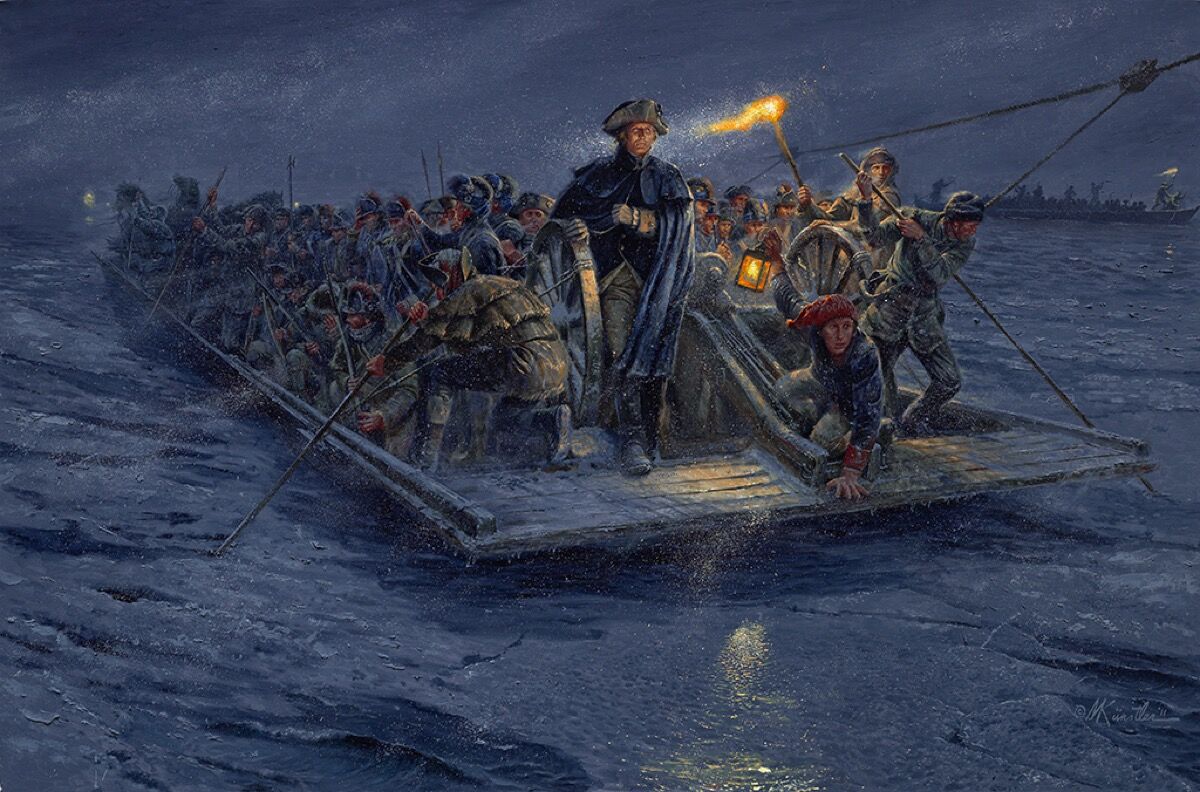 “The general would not have gone across in a little rowboat standing up. It’s very dramatic, but it wouldn’t have worked,” Künstler told me. So in his work you have something closer to the truth. Gone are rowboats; instead you have flat boats packed with standing troops, horses (look to the back), and the cannons they would have dragged along with them. Künstler also captured the wires that would have been strung from one side of the river to the other. The crossing boats were affixed to these wires, which were arranged in such a way that the natural current of the river carries the floating army to the opposite shore. Rather than oars, you see some troops using a pole to navigate in Künstler’s work.
But opting for historical accuracy has its challenges. Künstler had to eliminate the icebergs that make Leutze’s painting dramatic, in favor of the ice sheets that would have actually filled the Delaware. Another issue was that the crossing was made at night in the middle of a snowstorm. “It’s a difficult problem because it’s dark, no one can see anything,” Künstler says. “I asked the local historian, ‘I’d love to have light, is it okay to have a torch?’ And they said, ‘Oh, sure! They would have undoubtedly had that.’” But, Künstler says, the greatest issue he faced was how to make Washington stand out. To that end, he placed Washington in the most secure spot he could think of, figuring that’s where a general would be. This is why, in Künstler’s depiction, Washington is at the front of the boat, but also balancing himself on the securely fastened cannon.
Even as Künstler created his own more historically accurate version of Leutze’s Washington Crossing the Delaware, he cut the original artist some much deserved slack. “Leutze’s painting is maybe the most famous picture in America,” Kunster said. “It’s done in Germany in 1851—how do you expect the guy to know the things we do today? With a computer you can find out what the buttons on Washington’s coat were made of!” But interestingly, Leutze managed to nearly accomplish this feat sans-Google. Given that he had access to a perfect copy of Washington’s uniform, one of the most accurate aspects of Leutze’s painting is what the future President was wearing.
Isaac Kaplan is an Associate Editor at Artsy.
Related Stories