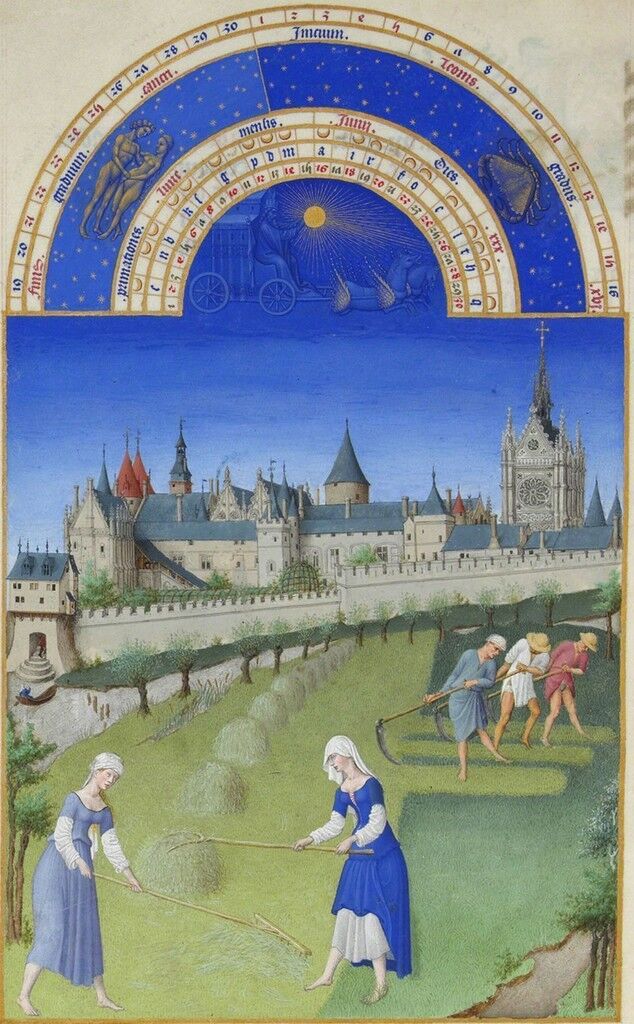 In his “Apologia ad Guillelmum” of 1125, the Cistercian monk Saint Bernard of Clairvaux attacked what he saw as superfluous decoration in the day’s art and architecture. “What is the point of those unclean apes, fierce lions, monstrous centaurs, half-men, striped tigers, fighting soldiers and hunters blowing their horns?” he wrote. “Here on a quadruped we see the tail of a serpent. Over there on a fish we see the head of a quadruped.”
These embellishments were all well and good for the general congregation, who needed something superficial to drag them to church. But wouldn’t the monks themselves be distracted from prayer by all the gargoyles dotting the cloisters? These monks, however, were incorporating such “distractions” into their own godly work producing and decorating religious texts, a practice that fed back into the development of art as we know it.
Look at any of the lavish illuminated manuscripts and books made in
medieval Europe
from approximately 600 to 1500 A.D., transcribed and painted by monks and then, later, by professional craftsmen and craftswomen. Originally written to preserve knowledge and the word of God, these illuminated manuscripts—“manuscript” comes from Latin, meaning “handwritten,” while “illuminated” traditionally refers to the addition of gold leaf to the pages—eventually became highly sought-after objets d’art created for wealthy patrons.
Along with the familiar saints and gold leaf, their pages are crammed full of monstrous, humorous, and sometimes smutty flights of fancy. Among patterns of ivy, one might find centaurs, penitent monkeys whipping themselves, and other fantastical animals playing musical instruments—long before
Marc Chagall
ever put them in his paintings. Some manuscripts suggest a dawning perfection of skill to rival Renaissance masters. One stunning example found in the margins of an antiphoner (a music book used by a choir) made for the Spanish cardinal Pedro Gonzalález de Mendoza around 1490 features lifelike flies captured perfectly on the petals of a rose. 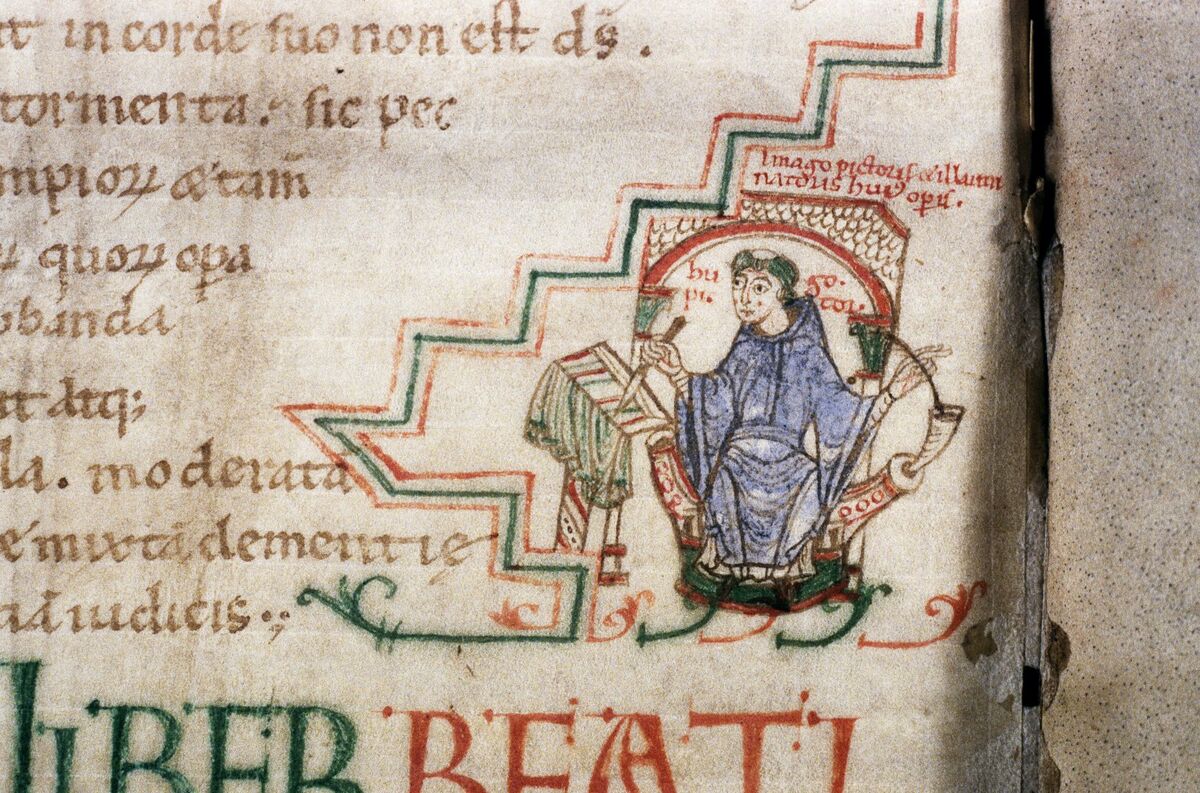 Detail of Jerome, Commentary on Isaiah, 11th century. Photo via ARTstor and the Bodleian Library at Oxford University.

The bawdier images and hybrid monsters seen in these works have been adopted by today’s meme culture, and are fodder for online listicles that delight with their outlandish trees of penises, rabbits humping humans, and men defecating from tall heights while figures below catch the refuse in jugs. These bizarre scenes occur in both religious and secular manuscripts: A French translation of the Bible by Jean de Sy, begun in 1355 for King John II of France, features a graphic illustration of Abraham circumcising himself, and the early 14th-century Maastricht Hours features one monkey blowing a recorder up the ass of another monkey, who then blows a horn, à la The Human Centipede. Oh, what would St. Bernard say if he had seen this?
Academics have tried to prove that these images were in some way necessary to the text and its scholastic intention, but their arguments often seem tenuous. Little is known about what drove craftsmen to paint some of the weirder images in illuminated manuscripts. But the fact of their existence feels like a small victory for imagination and artistic identity in an age of inherited artistic formulae that heavily relied on scriptural dogma and complex religious symbols.
From the midpoint of the first millennium, missionaries preaching Christianity throughout Europe would carry opulently illustrated Bibles in order to seduce pagans and nonbelievers. The mechanism of the book enhanced their visual effects: Turning the pages allowed the polished gold leaf to catch the light at different angles, creating a glimmering, living object.
During this time, Christians at most levels of society tended to be illiterate, with limited access to the written word (holy texts were exclusively transcribed in Latin, a language spoken mainly by the clergy and wealthiest upper classes). The images in the illuminated manuscripts provided crucial aids to understanding a text’s narrative, as well as the very precepts of their religion.
Early Irish religious texts such as the Book of Durrow, the Book of Armagh, or—most famous of them all—the Book of Kells include whole pages of non-figurative designs, sometimes hiding letters or words. These “carpet pages” are busy and abstract, their interlaced spirals making them difficult to decipher, even for manuscript experts. The ornamental words would have also proved barely legible to the few capable of reading at that time.
One can’t help but suspect that this intricacy is meant to visually convey the dazzling mystery of the word of God. But it was also undoubtedly art for art’s sake: the artistic impulse let loose. There is a beautiful doubleness to this. Just as these images lured the illiterate masses to religion, they also revealed—and obscured—further depths to devout followers, who found spiritual value in the unknowable. 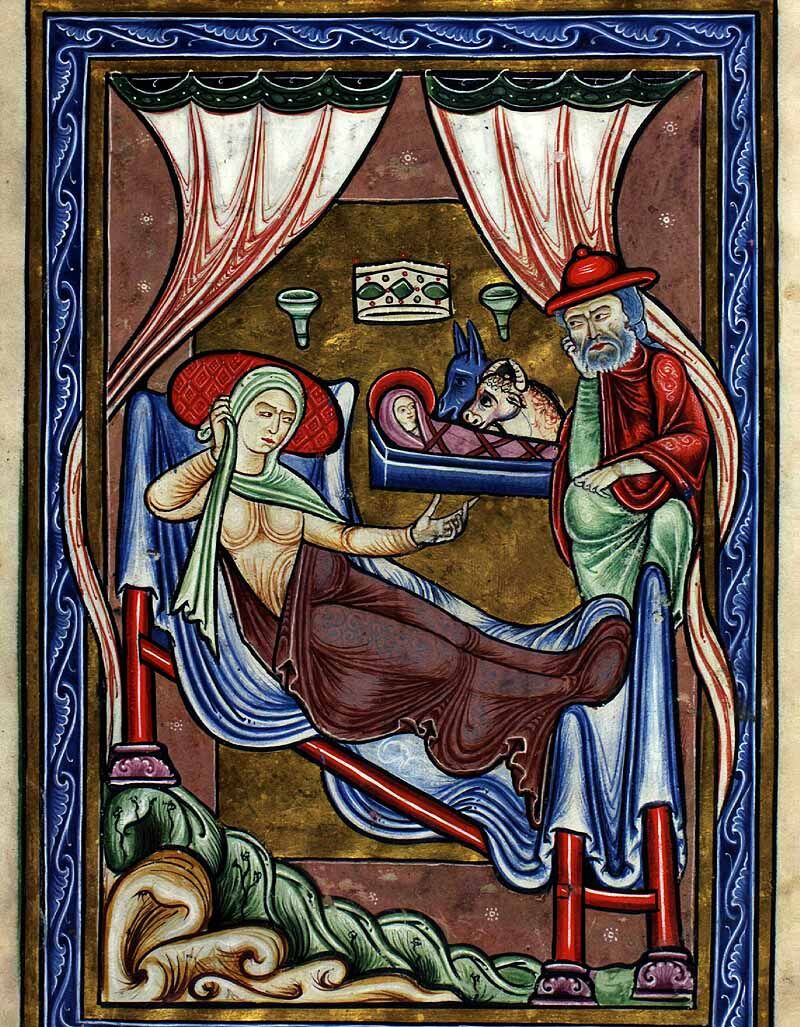 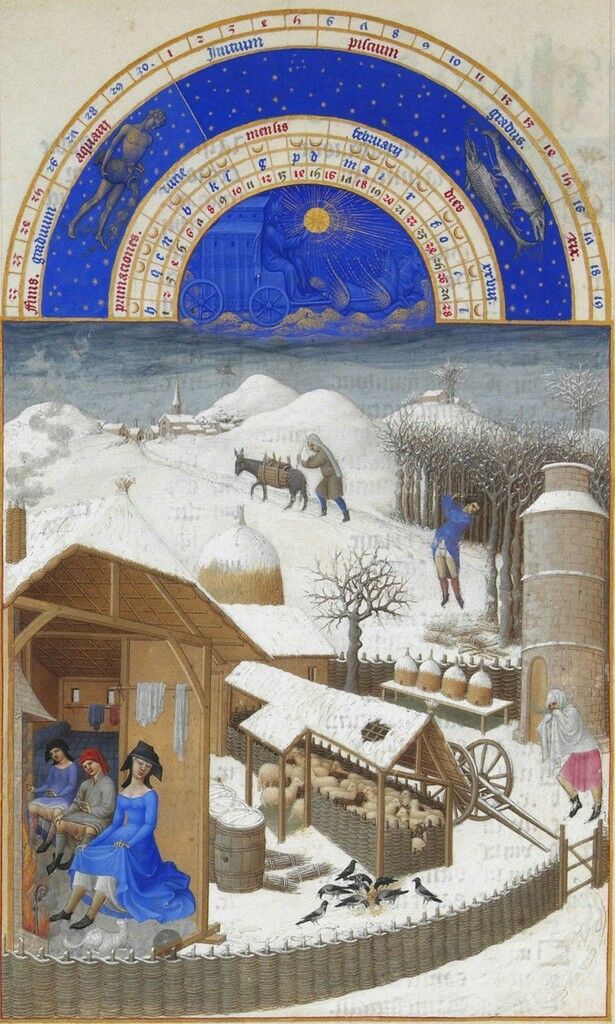 Limbourg Brothers
Février, miniature from the Très Riches Heures, 1411-1416
Musée Condé, Chantilly
Advertisement
On the whole, until a professional class of illuminators arose in the late 12th and early 13th centuries, copying text and illustrating manuscripts was just something to do around the monastery, other than planting vegetables, preparing food, cleaning, and praying. Writing and painting represented labor and discipline; decorating manuscripts kept the hands from devilish idleness. (In fact, monks sometimes complained in the margins of their projects about the drudgery of the task.)
As the centuries wore on, the work of book production shifted from monasteries to urban centers (particularly taking hold in Paris), where the medium’s popularity offered a lot of money to be made. However, the function of the illuminator, either from a religious or professional background, remained largely the same. Medieval artists were valued not for their innovation, but for relating inherited subjects, concepts, and symbols clearly and skillfully. Artistic individuality and identity as we understand them today had no place.
Still, there are a few instances of artists who painted their self-portraits among the flow of other images. The famous Hugo Pictor, or Hugh the Painter, inserted a small likeness of himself inking his quill at the end of his late 11th-century codex of St. Jerome’s Commentary on Isaiah. In the mid-14th century, a female illuminator, who has been potentially identified as Jeanne de Montbaston, depicted herself next to her husband along the bottom of the Roman de La Rose.
No matter how prolific the medieval idea that the human mind naturally houses sacred ideas alongside the profane was, some of this work—impious or not—suggests a rebellion, one that makes those early scribes more comprehensible in the context of contemporary ideas about artists and creativity.
Those self-portraits possess just as much of a sense of free fantasia as the wild scene of men chasing apes that appears along the bottom of the Hours of Jeanne de Navarre (1336–40), illustrated by Jean le Noir and other members from the workshop of
Jean Pucelle
, the preeminent illuminator of the Parisian court.
A book of hours was a personal, usually portable collection of all the prayers one was supposed to say at different times of the day. This lavish one was commissioned by King Philip VI of Valois as a gift for the only daughter of King Louis X of France, where women were forbidden from ruling. Jeanne and her husband Phillip D’Evereux were eventually given the Kingdom of Navarre as an appeasement, and it is thought by some that this present was meant to sweeten the deal. 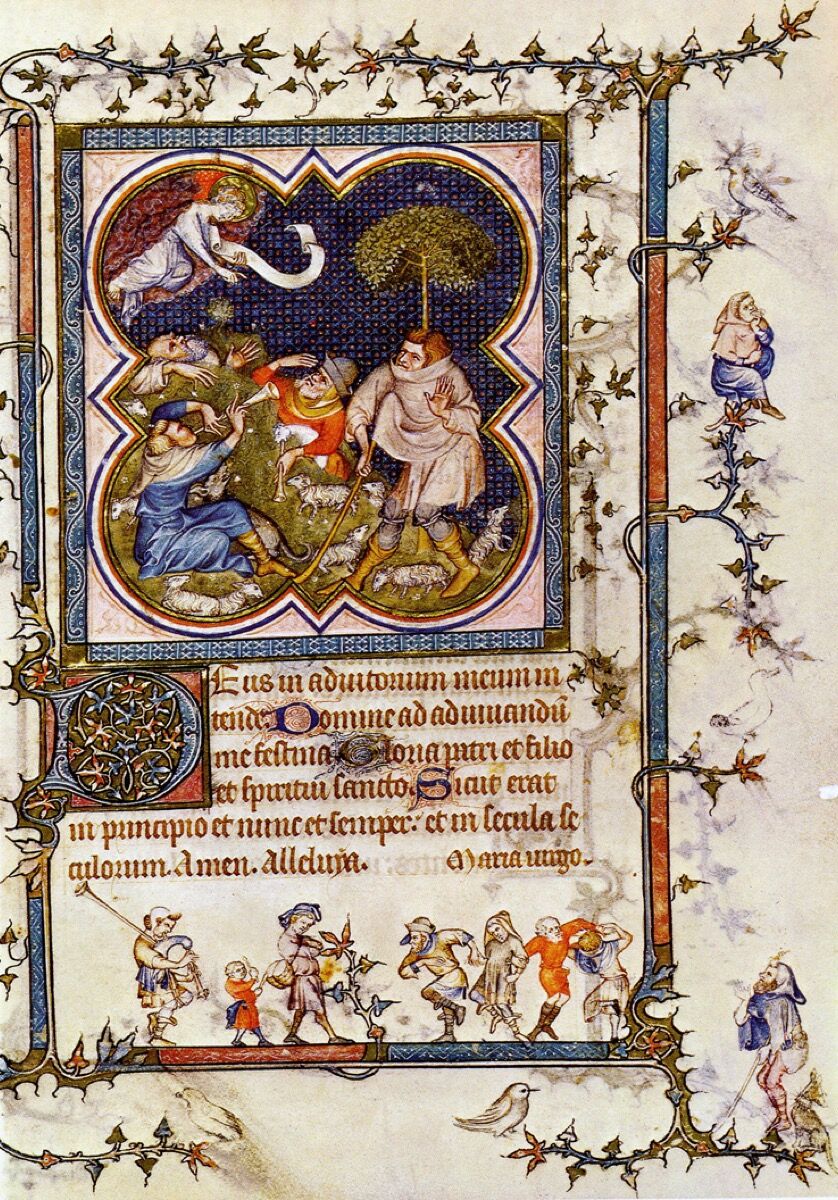 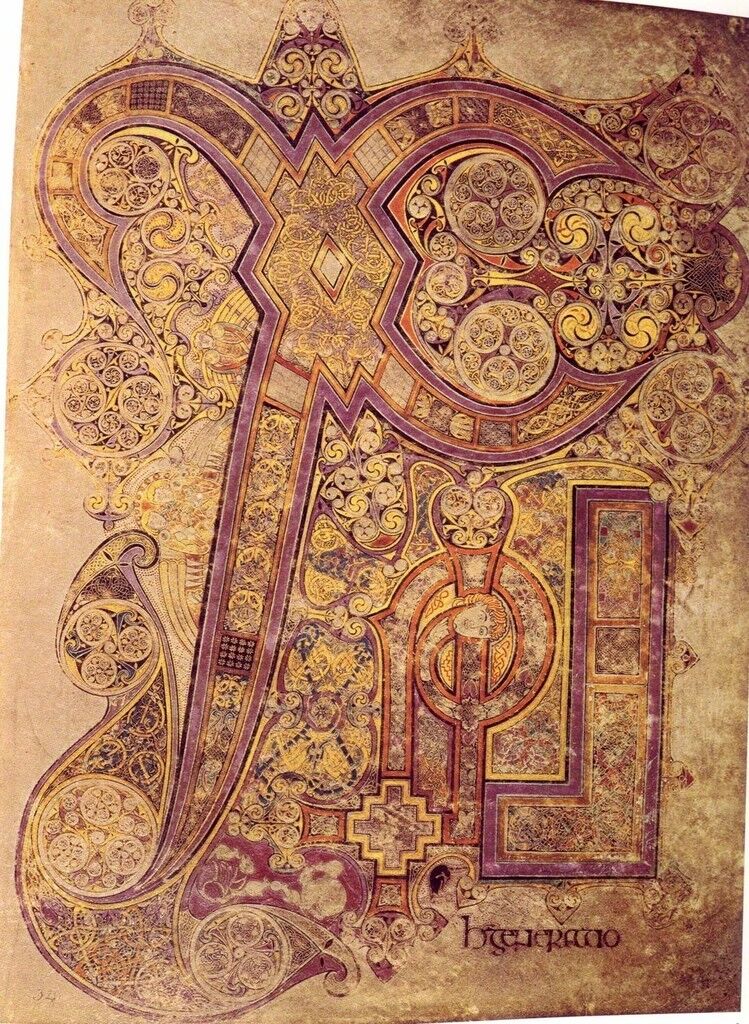 Chi Rho Iota page from the Book of Kells, Matthew 1:18, Late 8th or 9th century
The Board of Trinity College, Dublin
Books of this quality were objects of incredible luxury and worth. The famous Très Riches Heures of the Duc de Berry, created by the
Limbourg Brothers
and left unfinished upon the patron’s death in the early 15th century, is the ultimate example of a book that was probably worth close to its weight in gold.
Despite the solemnity of the religious texts and the patron’s royal status, Le Noir seems to have had fun with Jeanne’s book, and his humorous inclusions—a man with a horse’s body and gryphon’s feet proffering a jug as a snake coils about his neck; an exquisitely rendered yellow hoopoe bird perched on the right margin of the text, its crest ruffled—weren’t perceived as offensive or sacrilegious.
Such inclusions suggest imaginative play that was both concerned with traditional symbolism and untethered to convention, embodying amusement and delight in purely aesthetic doodles. Observing these images in the margins or in the initial letter of a Latin text must have offered relief, the feeling that the monks or artisans who made the books were rewarding themselves—and the pious reader—for their long, patient task. Looking at such work now, there is a jazz-like improvisatory element to all those chimeras—creatures knitted together from whatever parts sprung to mind.
Scant records keep us from knowing much about the religious or secular artists who made these manuscripts. Many anonymous figures have been assigned names based on the work they produced. There’s the Simon Master, whose 12th-century Copenhagen Psalter, with its panes of burnished gold, must have brought its royal readers close to the texture of heaven itself. The Boucicaut Master and the Master of the Mazarine Hours are remembered for their use of a poised, sophisticated style now known as “High Gothic,” which reached its zenith in early 15th-century Paris, and is characterized by colorful, vivid florals exploding from intricate ivy leaf lattices on every page.
The names of some, though, have survived throughout history. Records from big medieval cities also show us that there were plenty of women artists at work, such as Le Noir’s daughter, Bourgot. Looking through tax rolls of Paris, there is a sense that the visual arts then may have been more welcoming to women than in the French academies of the 19th century. The more one looks at the illuminated manuscripts from this period, the less formulaic and predictable they seem, and the more individual and expressionistic.
Jonathan McAloon
Related Stories