Why an Impoverished Chaim Soutine Filled His Studio with Rotting Meat 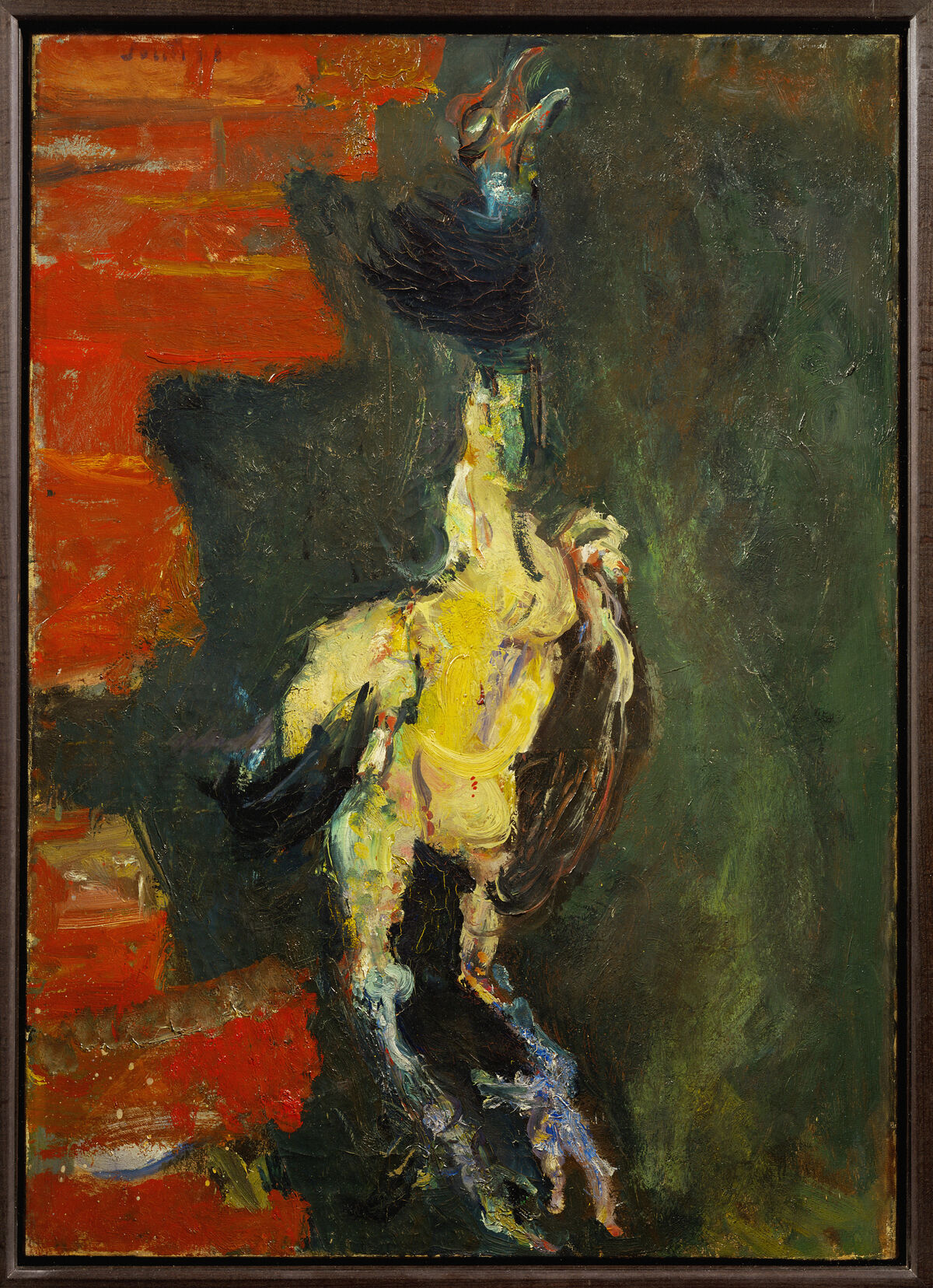 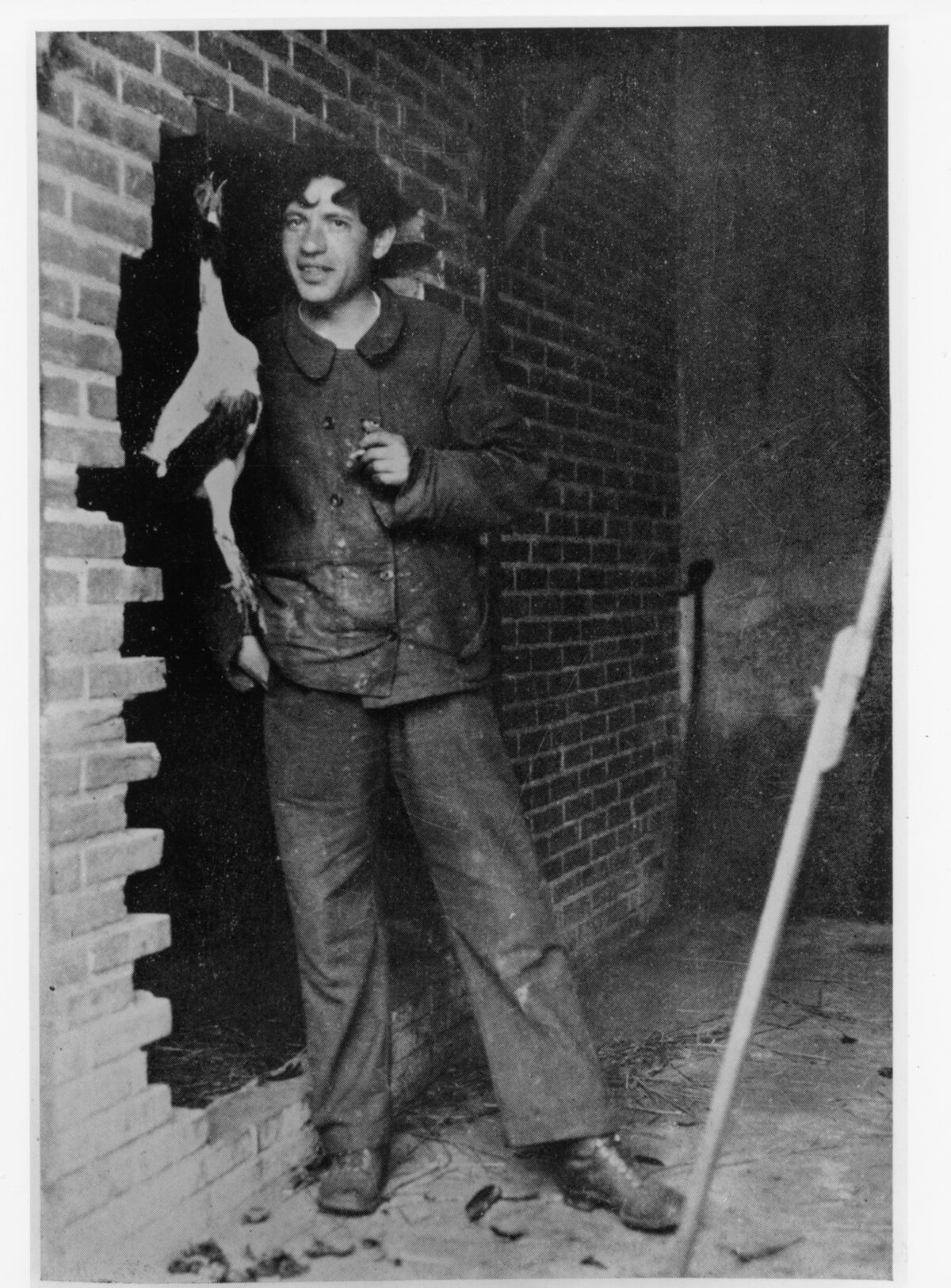 Chaim Soutine with a chicken, hanging in front of a broken brick wall, Le Blanc, western France (Indre), 1927. Courtesy of the Kluver/Martin Archive and The Jewish Museum.

In 1952, the British children’s book author Roald Dahl published a weird, decidedly adult story called “Skin.” In the narrative, a young painter tattoos a picture onto the back of his friend, a local drunk. Years later, the drunk staggers into an art gallery showing the painter’s work, which has become world-famous. Collectors offer to buy the tattoo for millions, until someone points out that they couldn’t claim their purchase without slicing the owner into bits. The name of the real-life painter who draws the fateful tattoo?
Chaim Soutine
.
How shrewd of Dahl to choose Soutine, of all artists, to make a cameo in “Skin.” Like the story, Soutine’s paintings—the subject of a powerful new exhibition, “Chaim Soutine: Flesh,” at the Jewish Museum in New York City—are both gruesome and fairytale-like. They’re full of goofy elongated forms and cheerful colors, but often the forms belong to dead animals and the colors signal a splash of blood. In early 20th-century Paris, while the avant-garde conducted cerebral experiments with form, Soutine painted visceral images of dead rabbits and slabs of beef, challenging the heart (and stomach) as well as the head. The savagery of many of his canvases can’t be denied, but neither can their vibrant beauty. As the influential art critic Élie Faure put it, his paintings give off “a profound heat.” 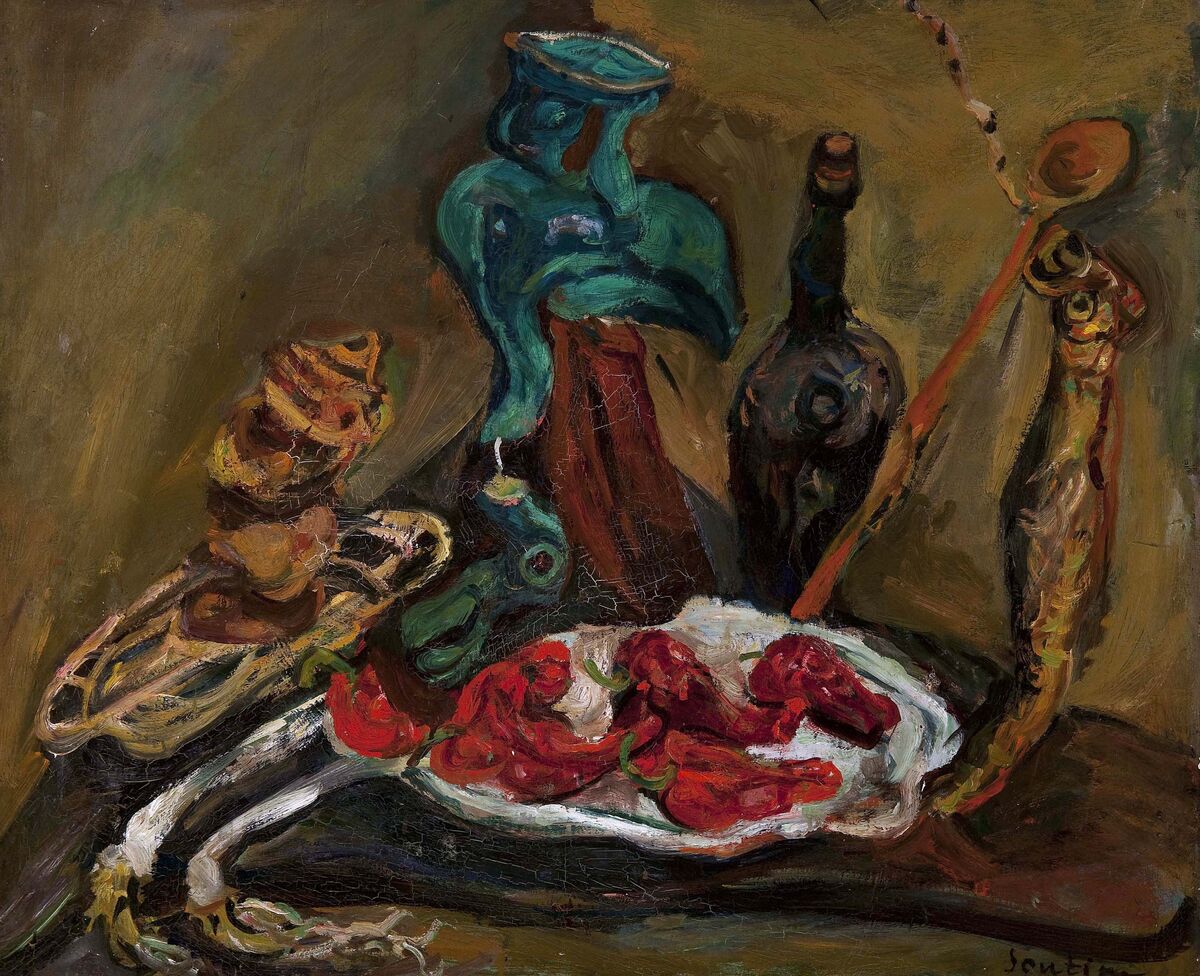 What accounts for all this heat? “I don’t really think we can fully understand Chaim Soutine without taking into account his cultural background,” Stephen Brown, one of the co-curators of the Jewish Museum exhibition, told Artsy. “He had a very hard childhood, and I think he was escaping on some level.” Soutine was born in 1893 in a small shtetl outside the city of Minsk, today a part of Belarus. The second-youngest child in a large, impoverished family, he grew up accustomed to beatings and hunger pangs, both of which likely took a toll on his health later in life. His decision to become a painter in some ways marked a decisive break with his Jewish upbringing. At the time, some rabbis frowned on the visual arts or even considered them blasphemous, due to the Torah’s prohibition of graven images.
Ironically, it was a rabbi who jump-started the teenaged Soutine’s career. When the boy sketched a picture of said rabbi, his son took offense and physically attacked the artist. Soutine’s mother sued, and with the resulting restitution, Soutine was able to afford to attend art school. After graduating in 1913, he relocated to the Parisian neighborhood of Montparnasse, where he lived in poverty almost as extreme as that he’d experienced in childhood. At the time, the neighborhood was jam-packed with young artists on the verge of greatness, and in his early twenties Soutine met or befriended
Amedeo Modigliani
,
Fernand Léger
, and
Marc Chagall
—painters whose works routinely go for millions today, but who in the 1910s struggled to break even on the price of a canvas.
Since the cliché of the starving artist was all too real for Soutine, it’s perhaps appropriate that some of his earliest Parisian works feature feverish depictions of food. At first glance, the bright greens and reds of Fish, Peppers, Onions (c. 1919) might leave an impression of warmth, but on closer inspection the scene turns sour: A dead fish stares back at the viewer with a single ghoulish eye, and the shape of the crockery calls to mind a duck with a broken neck. Soutine suffered from painful stomach ulcers throughout his life, and even after he began making money he rarely could stand to swallow anything richer than potatoes and bread—no wonder his paintings of meat and poultry tend to evoke both hunger and repulsion. 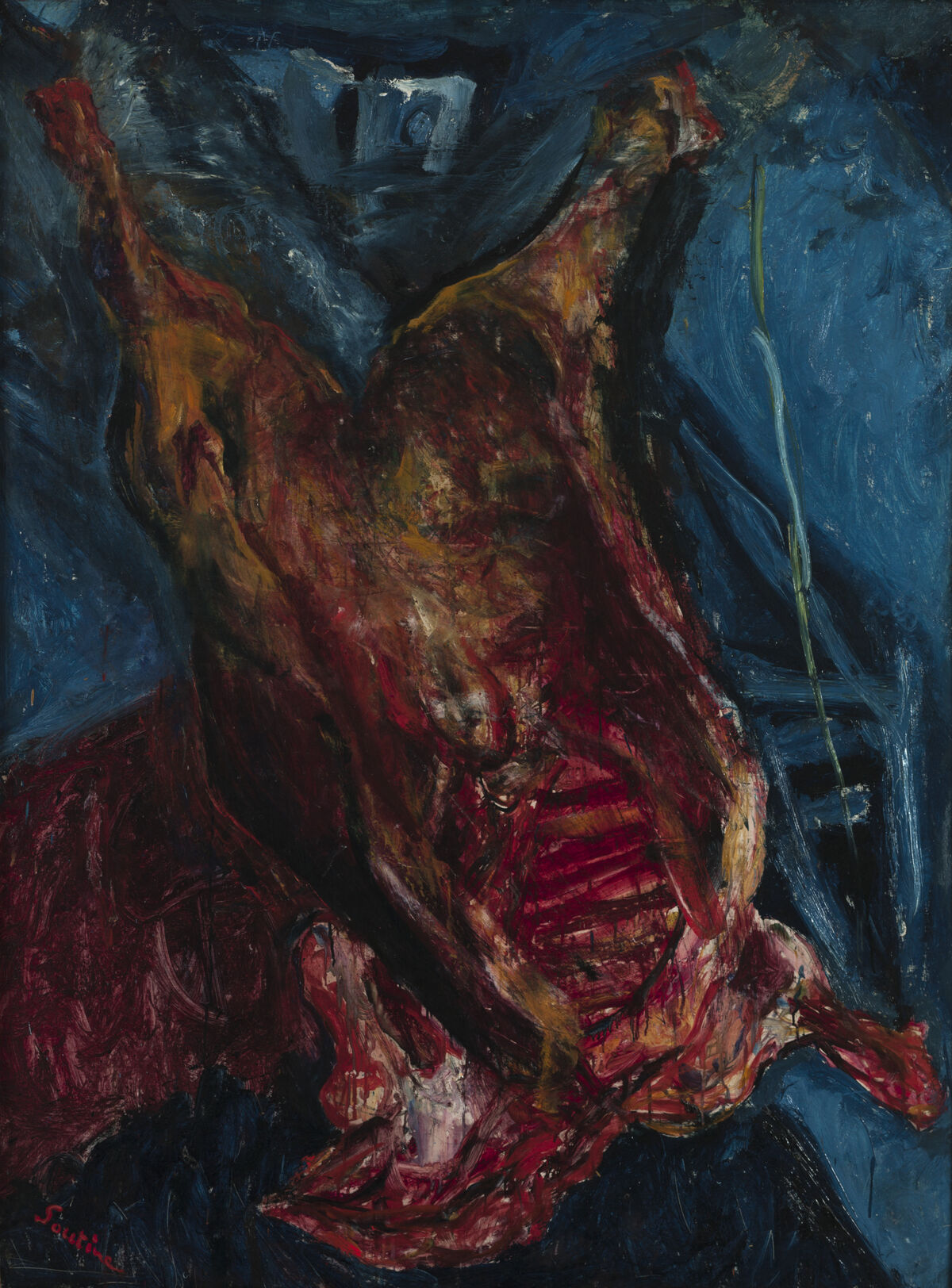 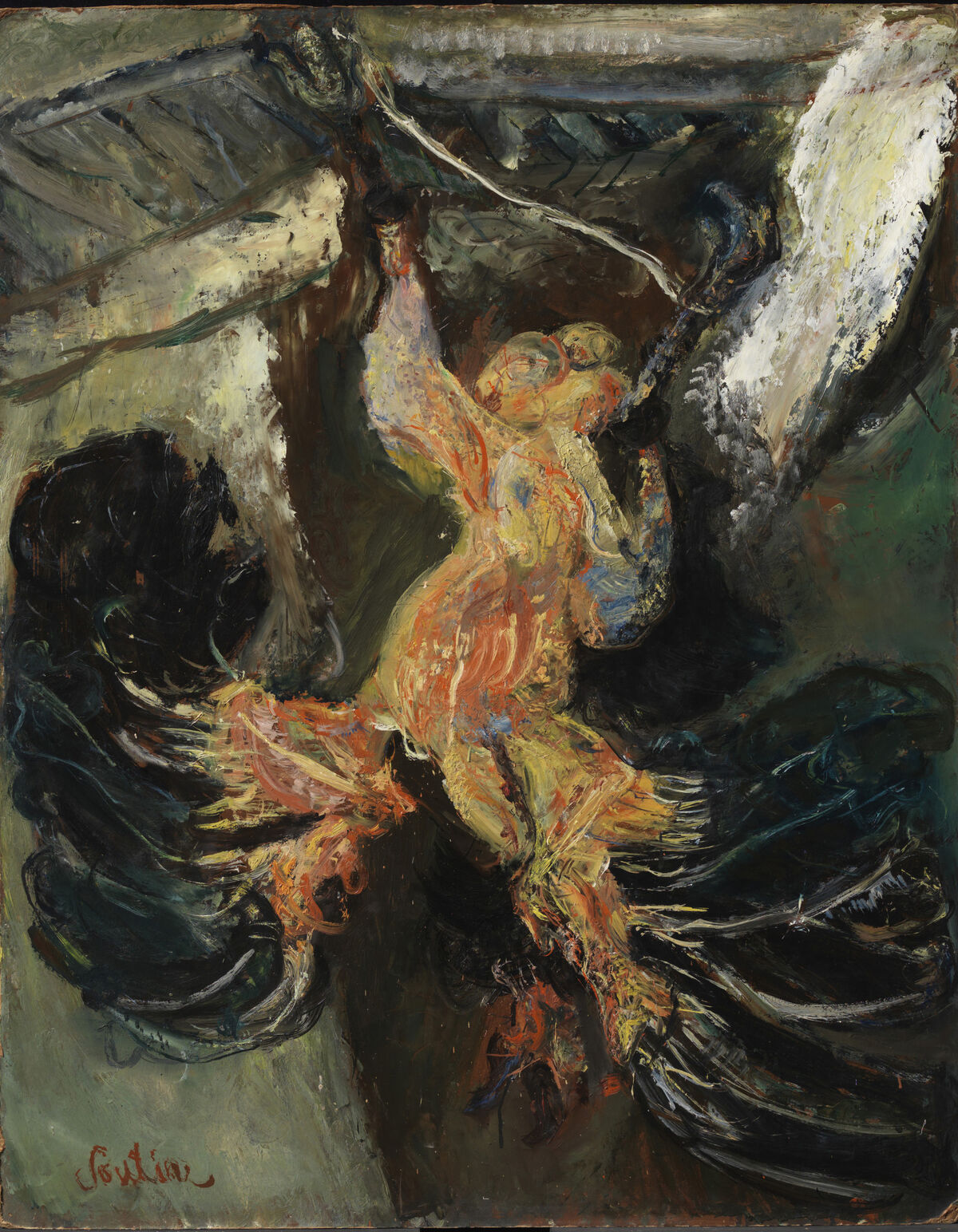 Advertisement
Food also figures prominently in Soutine’s artistic output from the 1920s, the decade during which he completed some of his most haunting images. A series of portraits of porters, cooks, and bellboys—the working-class people who handle the food at fancy hotels—first brought Soutine worldly success. In 1923, the prominent American art collector Albert C. Barnes was so astonished by Soutine’s portrait of a pastry chef that he promptly bought every painting by the artist he could find. Soutine’s early popularity among American dealers eventually led to major exhibitions in Philadelphia, New York, and Chicago; along with
Pablo Picasso
and
Henri Matisse
, he became one of the first European modernists to be lauded on the other side of the Atlantic.
Even after Soutine started making money, however, his habits remained defiantly bohemian. For much of 1925 and 1926, he surrounded himself with rotting meat from the slaughterhouse in order to complete his famous paintings of beef carcasses. There’s a well-known story that Soutine’s neighbors called the police to complain about the disgusting stench coming from his studio. Soutine managed to persuade the authorities to let him keep his raw meat until he was finished painting, on the condition that he spray it with formaldehyde. Then, when he discovered that the chemicals were causing the carcasses to dry out, he began sloshing fresh blood over the beef. By some accounts, Marc Chagall noticed the blood leaking out from under the studio door and ran down the street screaming, “Soutine’s been killed!” 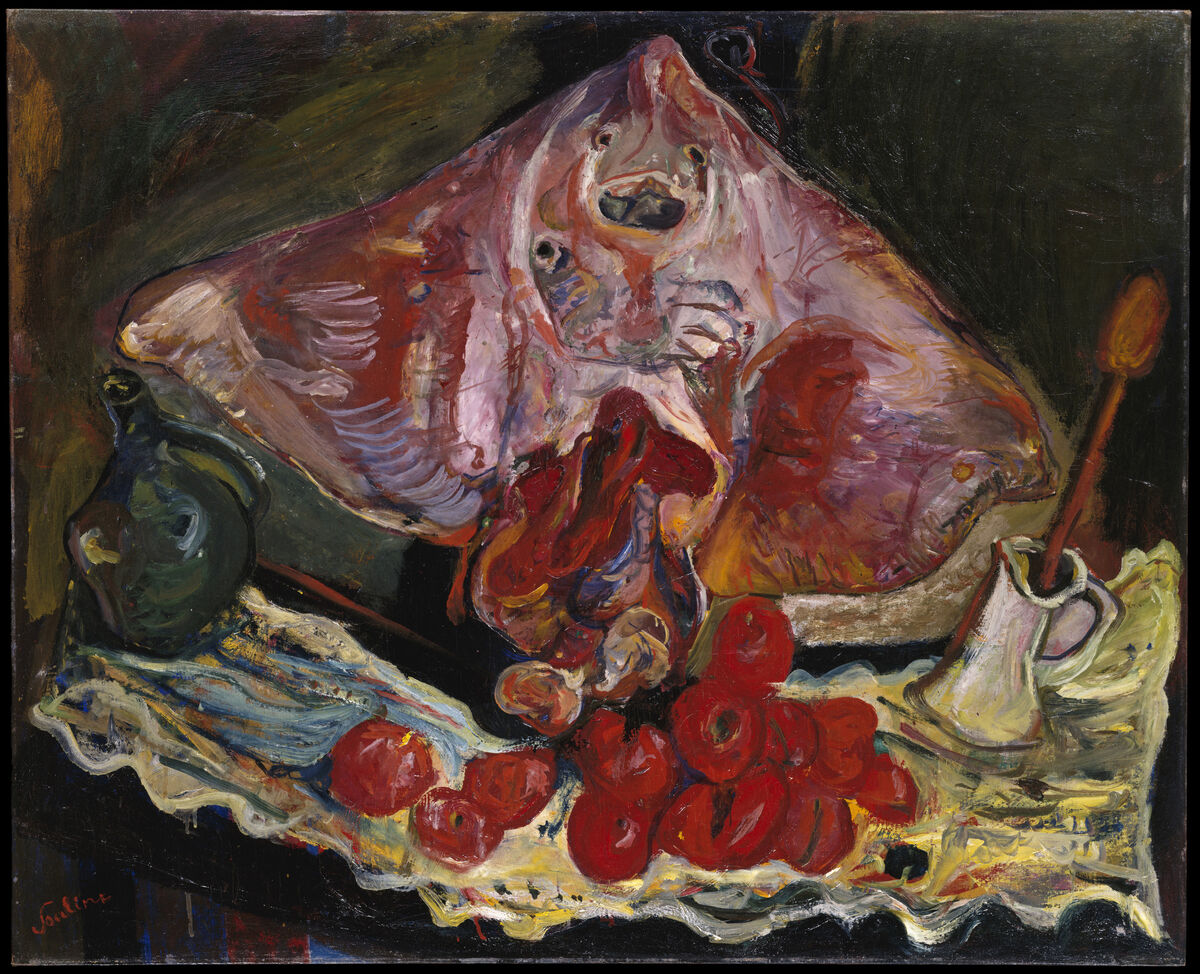 To stand before Carcass of Beef (1925) is an intense, uncomfortably vivid experience—you can almost smell the meat rotting in the studio. The critic Clement Greenberg once wrote of Soutine’s works, and his meat paintings in particular, that they seemed “more like life itself than like visual art.” Yet Soutine’s brushwork is so energetic and experimental that sheer style—not beef carcasses, bellboys, or any other aspect of “life itself”—could be considered his paintings’ true subject. As Brown told Artsy, “If you are interested in the usage of paint and the sheer tactile potential of pigment and oil—he appeals to that.” At a time when modern art was undergoing momentous change, Soutine had a foot in both the realist and abstract traditions, without ever quite belonging to either one.
This is partly why Soutine has acquired a reputation as the ultimate painter’s painter—a figure who, decades after his death, continues to influence artists working in vastly different styles. Listening to Brown discuss Soutine’s legacy is like listening to an honor role of great creative innovators since WWII.
Francis Bacon
, with his blood-curdling paintings of beef carcasses hanging in glass cages, was visibly indebted to Soutine—but so were his contemporaries
Jackson Pollock
and
Willem de Kooning
, who largely abandoned figurative art for “
Action Painting
.” The exploits of the
Vienna Actionists
, who revelled in “blood and guts,” call to mind the legendary image of Soutine splashing blood over his rotting carcasses. So, in very different ways, do the performance art of
Carolee Schneemann
and the conceptual pieces of
Damien Hirst
, who, said Brown, made “dead animals his subject and his medium.”
Soutine did not live long enough to see himself become an influential artist. Instead, his career was stopped cold by the German occupation of Paris in 1940. Decades after he’d fled his Jewish upbringing, the Nazis chased him into hiding, and the fear of capture seems to have worsened his already miserable health. By August of 1943, his ulcer was causing him excruciating pain. Unable to get the medical care he needed, he died at the age of 50, a brilliant painter—and, ultimately, a victim—of flesh.
Jackson Arn
Cover Image: Soutine at Chatel-Guyon in central France (Puy-de-Dome), 1928. Courtesy of the Kluver/Martin Archive and The Jewish Museum.
Related Stories