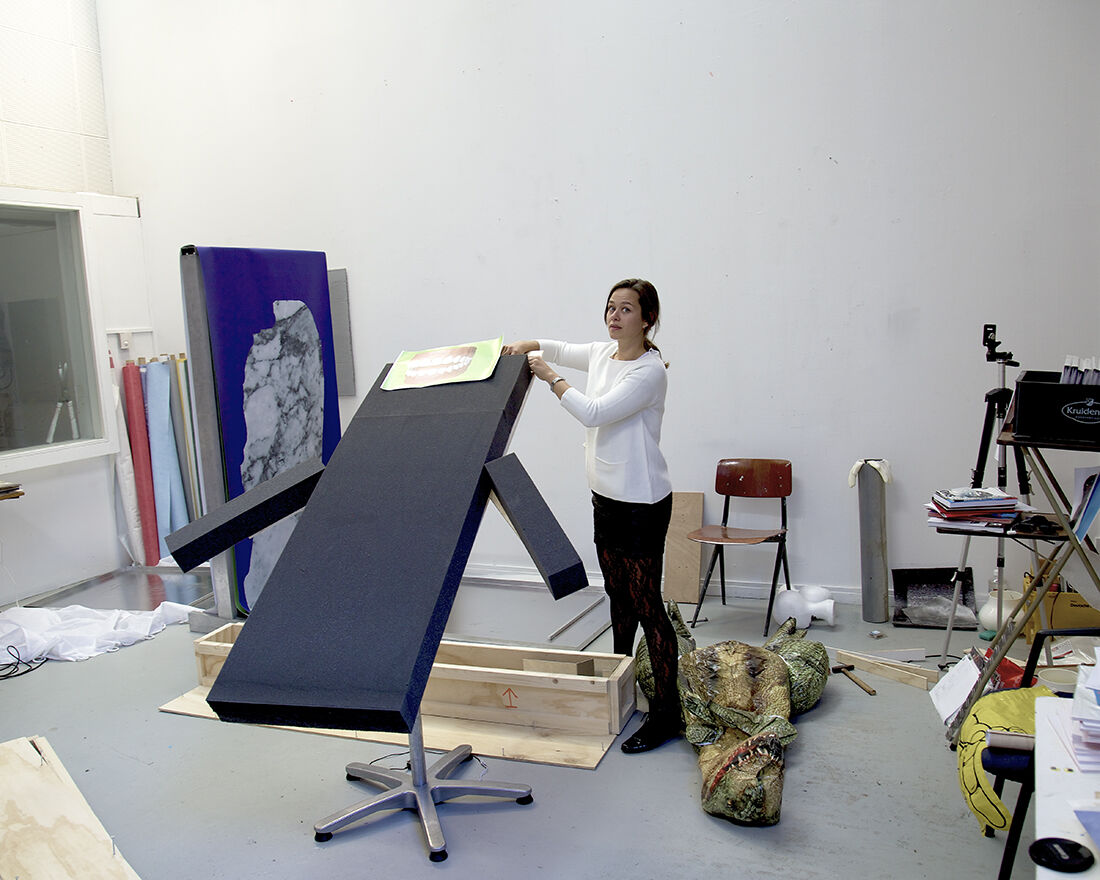 Portrait of Catherine Biocca in her studio. Courtesy of the artist.

“Greek sculpture is the symbol of perfection and beauty in art history,” says Catherine Biocca, the young Italian artist whose screaming, lamenting video installations (sculptures crying out as their heads are chiseled by hammers and drills) are on view this week at the SUNDAY Art Fair. “It’s dichotomic: you’re creating something beautiful by smashing, and brutally destroying, something else.”
Despite being raised in Rome, a city steeped with classical art history, it was perhaps other childhood influences, like violent cartoons (the quintessentially brutal Ren & Stimpy Show) or sci-fi films (Jurassic Park) that most impressioned a young Biocca. The artist, who is half-German, followed a poli-science degree in Rome with eight years at the Kunstakademie Düsseldorf. She approaches her work through the concept of schadenfreude, a German and relatively untranslatable word loosely meaning “malicious joy” (or “the joy of someone else’s failure,”as Biocca puts it). “All of my work has to do with the moment of a viewer facing his own schadenfreude. It’s that moment of being naked, but also enjoying a moment of embarrassment for someone else,” she says. 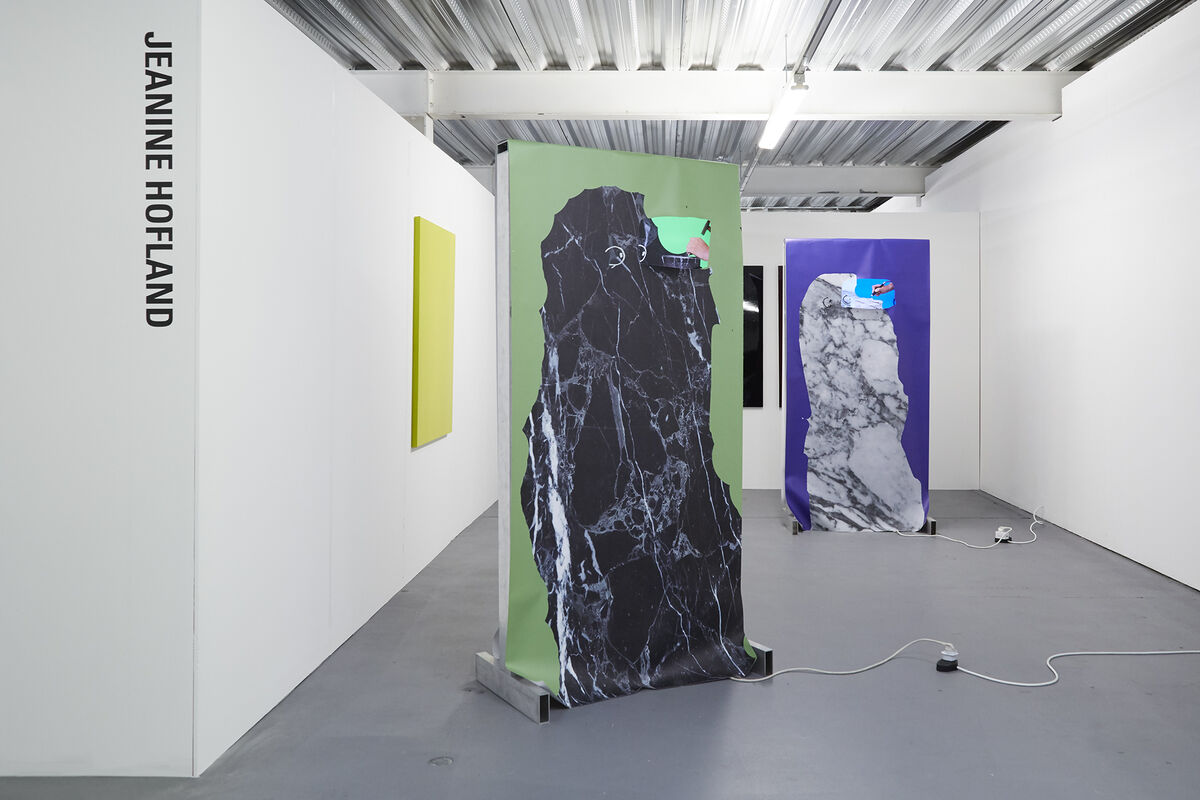 A week before the fair, chatting from her airy studio at Amsterdam’s Rijksakademie, Biocca continues: “We enjoy seeing something violent happening, just as long as it’s not to us or to anyone close to us.” Recalling episodes of the Ren & Stimpy Show, a ’90s-era cartoon chronicling the grotesque misfortunes of a cat and a chihuahua, she says, “It’s brutal and violent. It relies on that moment of failure.” Of equal importance to Biocca is the often violent, aggressive act of creating art: “The violence within a Ren & Stimpy episode and the Venus de Milo being carved from stone—in my mind they resolve in the same way.”
With this in mind, Biocca began a series of drawings in 2013 titled “Blushing Sculptures,” transposing anthropomorphic features onto—and seeking empathy for—Hellenic sculptures. “I started drawing these blushing sculptures that were ashamed, or hurt, because they were naked or someone was carving or hammering them. I was thinking it’s so fucked up that someone is carving in such a violent and aggressive way to create [what’s essentially] an image of himself.” 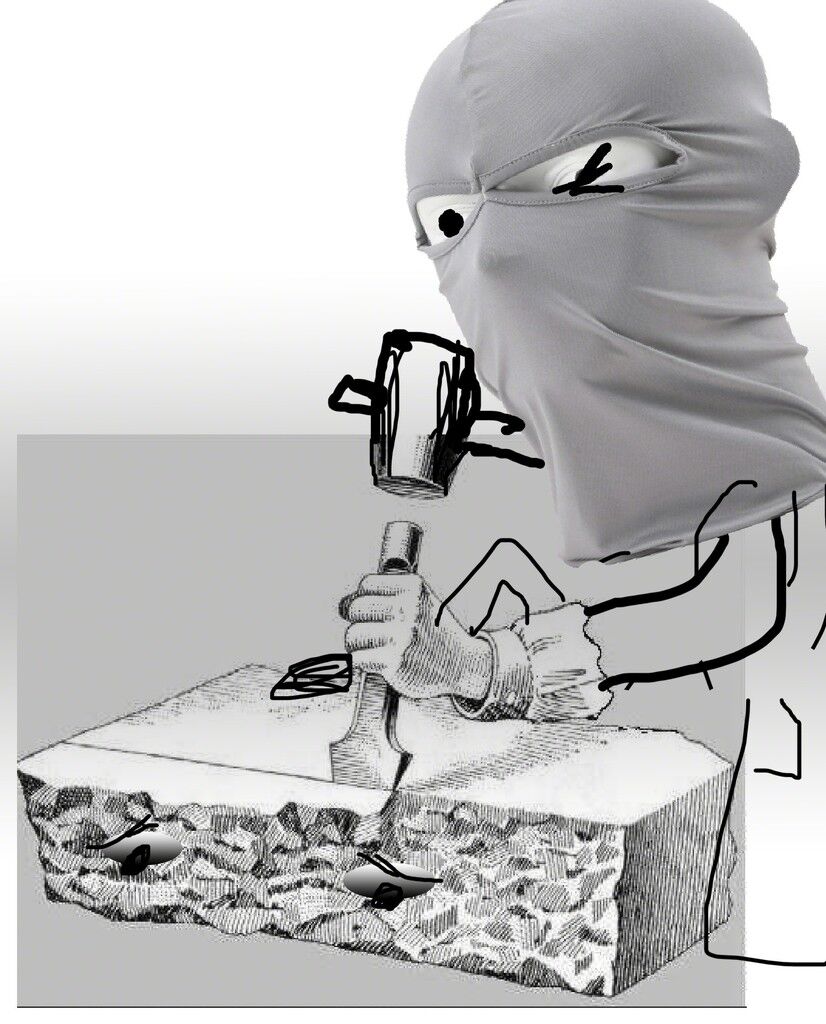 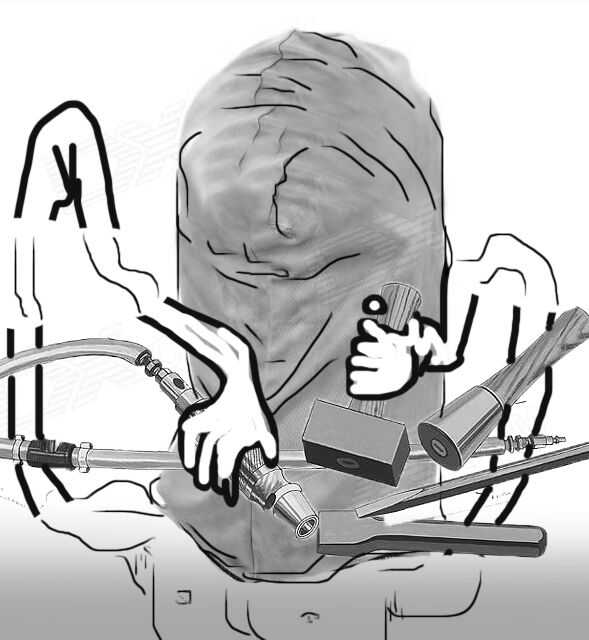 Catherine Biocca
No. 2 of Blushing Sculptures series, 2015
Jeanine Hofland
Advertisement
To further the empathic bond, Biocca has upsized the project: “A drawing is cute and small, but not something that has a personal grip on you,” she says. “I was thinking it would be nice to have a more human-sized scale version of this.” And from there, Biocca’s SUNDAY Art Fair video installation, six-and-a-half feet in height, was born.
It’s not the first time Biocca’s work has danced between two, three, even four dimensions. Her 2014 work MEETING 1, a three-minute video capturing a lo-fi and intentionally lackluster dialogue between two cartoon figures, later developed into MEETING 4D (2015), a life-sized adaptation allowing for a viewer to physically engage with the action. Not only can you watch the conversation, you can walk through it. “I work with animation a lot,” she says. “But people really feel the distance between the screen and the viewer. In the past three or four years, I’ve been trying to reverse this. I’m thrilled about the exchangeability between the real and the animated world.” 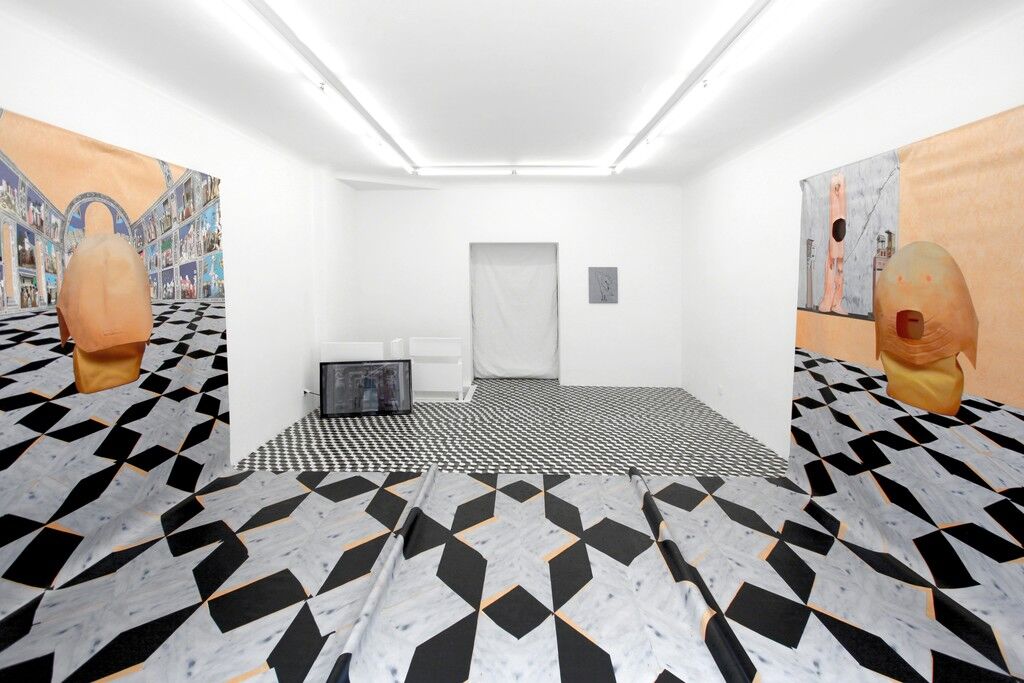 Catherine Biocca
Meeting 4D, 2015
Jeanine Hofland
At SUNDAY, the artist’s first time showing work at an art fair, Biocca brings these concepts together in a dual-sculpture installation based on her “Blushing Sculptures” series. Human-sized PVC prints of marble blocks destined as classical sculptures are outfitted with video screens showing hands actively carving into their respective heads. “You hear the sculpture screaming because it hurts,” she’d told me prior to the fair, hoping to arouse empathy in the crowds. According to Sjoerd Kloosterhuis, director of Jeanine Hofland, the response of collectors—interested, and generally amused—has been driving the work’s intention home. “What’s going on is not funny at all,” he said. “It’s a really nice image and you almost forget what’s going on. This creature is afraid; it’s being hurt.” Perhaps, this is a key example of schadenfreude, and in the combination of marble and animation, a collision of classical sculpture and post-internet art.
Recently, a billboard designed by Biocca depicting the head of a classical Greek sculpture, mechanically winking, and with blood pouring out of its ears, was erected on the façade of a bygone welding factory in Ghent, Brussels. It’s the first of a new artist-commission series, and has a digital screen embedded in it that allows for unexpected, animated winks at passersby. “It sounds like everything I do is about these sculptures,” Biocca laughs. 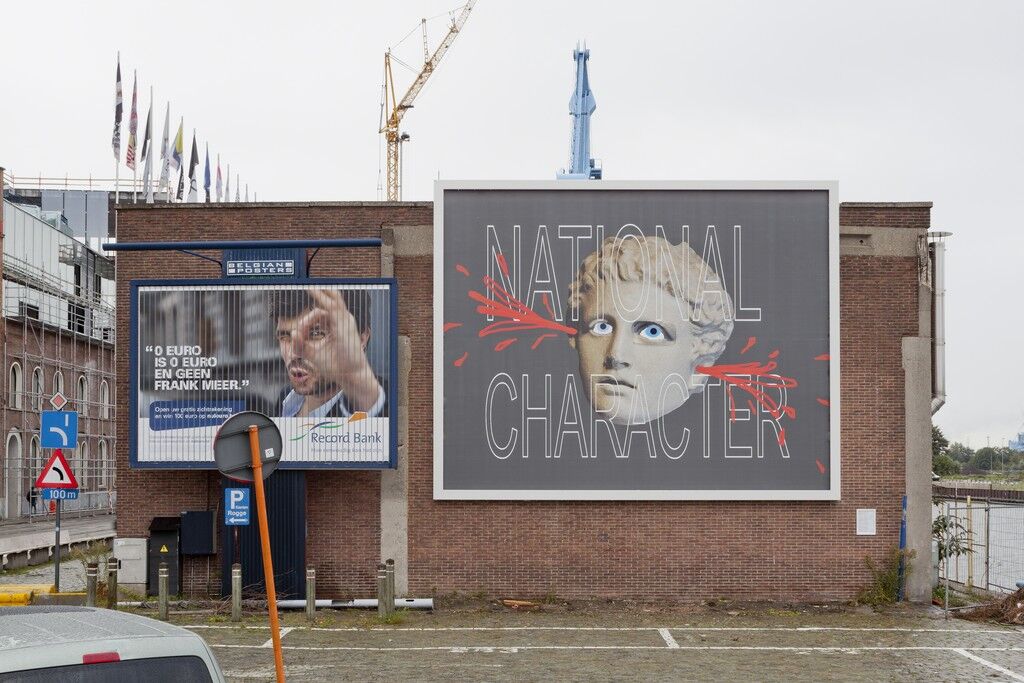 Catherine Biocca
Billboard Series, 2015
Jeanine Hofland
But as her two-year residency at Rijksakademie comes to a close and Biocca puts the finishing touches on a huge, multidimensional installation about the Watergate scandal for Open Studios, her aptitude for floating between dimensions and realities—and subject matter—is hardly in question. “This is a very good moment workwise,” she says. “I’m full of things I want to do—ideas, sketches—all built around the notion that I can actually transpose something like an animation into the real world.”
Molly Gottschalk is Artsy’s Lead Visuals Editor.
Explore SUNDAY Art Fair 2015 on Artsy.
Related Stories