The Late Style of Bruce Nauman 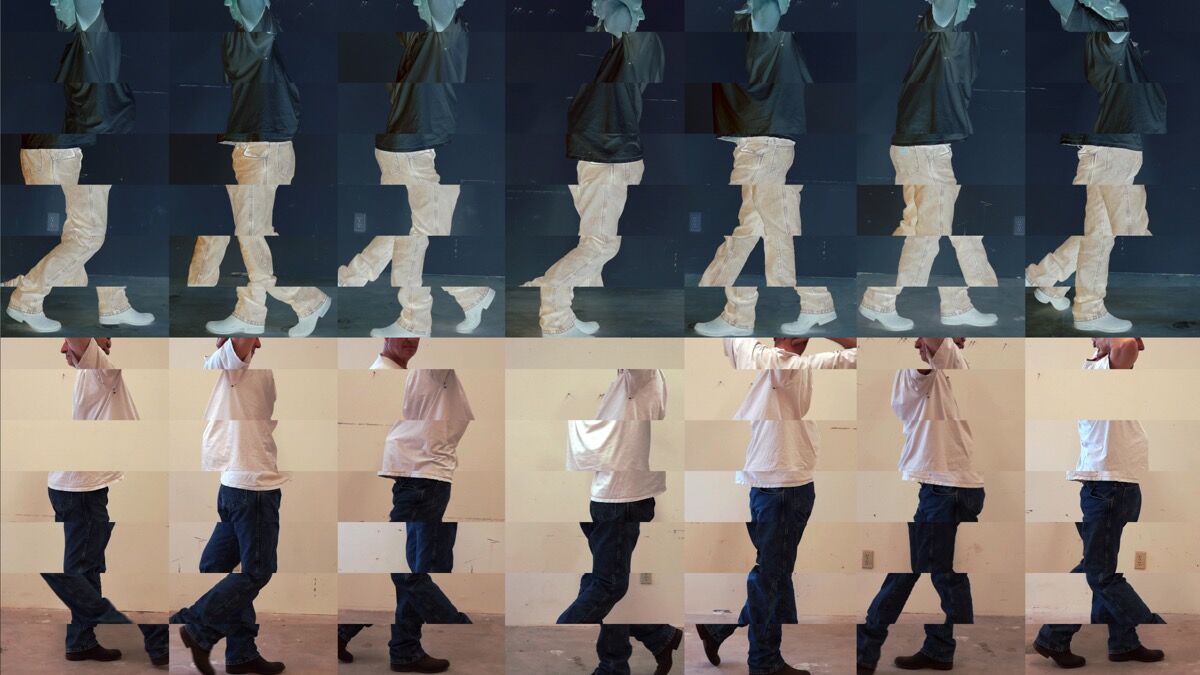 Bruce Nauman, Contrapposto Studies, i through vii, 2015/2016. Courtesy of the artist and Sperone Westwater, New York

It is perversely appropriate that
Bruce Nauman
’s most recent show at Sperone Westwater, “Contrapposto Studies, i through vii,” opened during New York Fashion Week. As lithe models swish their hips down catwalks across the city, the 74-year-old artist, as if projecting those models’ future in the form of a video, forces his hips back and forth with so much effort you can almost hear them creak. Yet Nauman has reached an age and a point in his career that puts him well beyond the pull of fashion. His show has another sort of élan—a wily upending of late style.
We tend to associate the works of an artist’s riper years with a particular profile: pared down to the bare bones of statement and meaning, shorn of filigree. In a word, the late style is simplicity, a distillation of the themes and concerns of a lifetime. One thinks of
Matisse
’s cut-outs;
Willem de Kooning
’s elegantly stripped-down canvases, alive yet with painted wisps and sinuous ogees;
Louise Bourgeois
’s hand-sewn totems; and Elizabeth Bishop’s poem “One Art,” with its repetition of the line, “The art of losing isn’t hard to master.” Although the seven video installations on view at Sperone offer a retrospective glance, they complicate rather than simplify: Where before he examined and exploited the expressive power of the body, Nauman today examines its subtle dissolution, its fragmentation into bits of information (most of which is bad news). (A companion show titled “Contrapposto Studies I through VII” is on view at the Philadelphia Museum of Art starting this fall.)
The new work looks back at one of the artist’s first video pieces, Walk with Contrapposto (1968), in which Nauman takes the pose most associated with Classical and Renaissance sculpture—the hip cocked with the body’s weight shifted in a diagonal, from the back leg to the forward shoulder—and sets it in motion. With his hands held up behind his neck to emphasize the swing of his hips, he walks slowly (much slower than a runway model) down a constricting, narrow corridor. First he moves away from the camera, drawing the viewer’s eye to his notably athletic ass; when he reaches the end of the corridor, he pivots and returns toward us. He repeats this journey for nearly an hour, the only sound the clomp of his boot heel as it hits the floor.
The video plays on the fact that ancient artists came up with contrapposto to solve a problem: how to depict movement in a static sculpture, how to make inert stone or bronze look alive. Among Nauman’s new works, Contrapposto Study i (all works 2015/16) and Contrapposto Study ii are presented contiguously on a long wall at Sperone: A video projection of the septuagenarian artist repeated in four frames, wearing blue jeans and a white pocket tee, just as in 1968, sauntering in the identical pose, is followed by four frames of Nauman in negative, which render his jeans a yellowish white and the T-shirt dark. The unfurling frames call to mind another ancient technique for capturing movement, the frieze, which was used to capture the flow of a story. And it’s storytelling, I think, that most distinguishes these recent works from the earlier Walk.
That piece’s style served other ends, which Nauman talked about in a 1970 interview. Referring to the group of video works that includes Walk with Contrapposto, he discussed how “an awareness of yourself comes from a certain amount of activity and you can’t get it from just thinking about yourself. You do exercises, you have certain kinds of awareness that you don’t have if you read books.” The video pieces of 1968, “were specifically about doing exercises in balance…dance problems without being a dancer.”
The studies of the last two years are also exercises in balance. In some frames, Nauman briefly loses his equilibrium; in others he momentarily drops his hands from behind his head, as if from exhaustion. Study iii and Study v, which play on opposite sides of a small room, offer side views of the artist, this time with four negative images on top of four positive; Study iv, depicting rear views in the same configuration, is displayed on the wall between them. As the projected video pieces accumulate, and as we see, and thus learn, more, the contours of a narrative become clearer. It hints at how time deconstructs us physically, while splintering our sense of self. From the side view, for instance, you can discern the faint outline of a device beneath the artist’s shirt, a remnant of a recent bout with cancer. In these further studies the images themselves break sequence—sometimes the top half of the body faces a different direction from the bottom half; at points Nauman leaves the frame altogether. 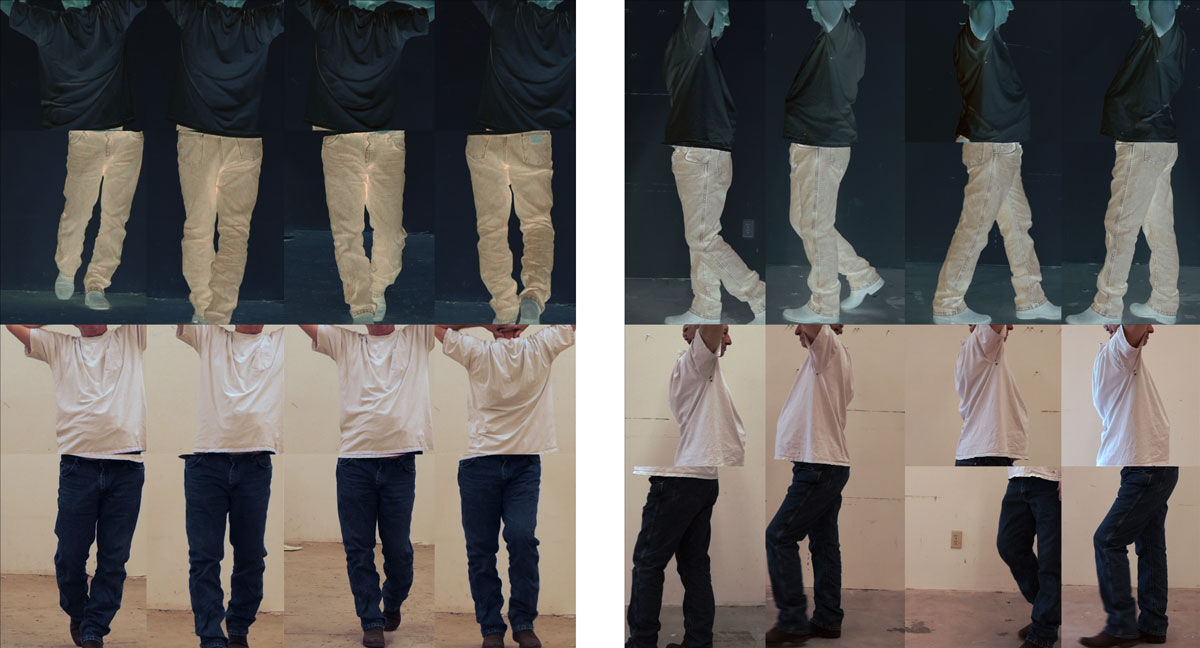 Bruce Nauman, Contrapposto Studies, i through vii, 2015/2016. Courtesy of the artist and Sperone Westwater, New York

On the gallery’s third floor, Study vi echoes and reinforces the narrative. Here the way Nauman’s gait has degraded is accentuated further by disjointedness within each frame: thighs slide sideways away from knees, the torso itself is sliced and misaligned. The crescendo comes in Study vii, where the tiling and fragmentation reaches its apex. The artist looks like a kinetic jigsaw puzzle, poorly put together; parts of one frame seem to slip into others.
If the 1968 piece focused on controlling the energy of a particular movement, the new “Contrapposto Studies” rely on an exceptionally deliberate approach to depiction. Each work employs an identical device—a walk with contrapposto—but in the recent pieces we learn far more, for they offer multiple perspectives and accrue details that add up to a story. In fact, Nauman’s suite of video works mimics a principle of physics: that the more information there is in any system, the greater the level of entropy (dispersion of energy). The information we gain as we move through the show builds into a story, while the artist in it becomes less and less intact.
Still, to me, it seems like the opposite of the sad tale we’ll all eventually star in, the one about a failing body. The way it teases complexity out of the simplest means instead suggests a grand story, one told through Nauman’s body, about the art of losing yourself with style.
Daniel Kunitz
“Bruce Nauman: Contrapposto Studies, i through vii” is on view at Sperone Westwater, New York, Sep. 10–Oct. 29, 2016.
“Bruce Nauman: Contrapposto Studies I through VII” is on view at the Philadelphia Museum of Art, Sep. 18, 2016–Jan. 8, 2017
Related Stories