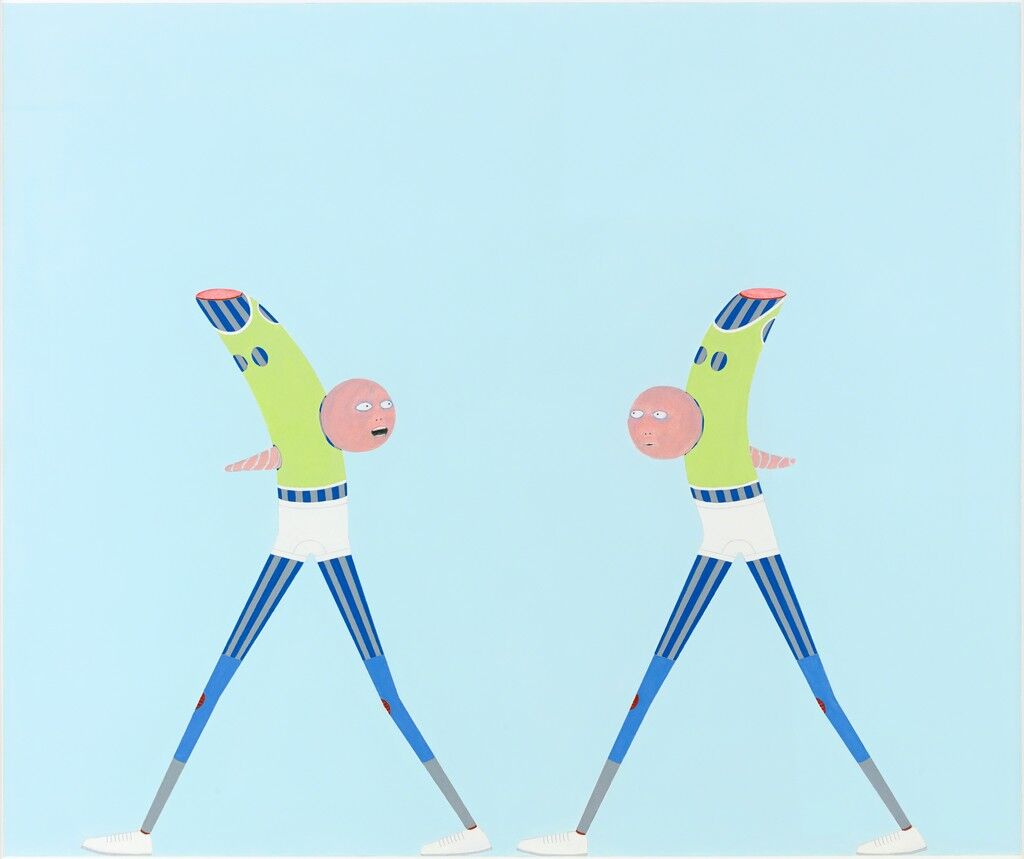 Laylah Ali
Untitled (Acephalous series), 2015
Paul Kasmin Gallery
Ali is best known for her “Greenheads” series, which pictures a sprightly society of fantastical creatures lacking race, gender, and age, in the throes of ripping one another apart; the series earned her a traveling museum exhibition that crossed the U.S. in 2012 and 2013. Now, 10 years since her last solo show in New York, Ali surfaces a new breed of beings at Paul Kasmin Gallery.
The show unveils “The Acephalous Series,” a group of paintings realized in a large scale that is new for the artist, and which may be best understood through its title. Acephalous, a zoological term with Greek roots, can refer to something that is missing a head, or, tellingly, to a society without a leader. These works, featuring disembodied heads and dismembered figures, pick up on questions and issues that the “Greenheads” prompted, from power dynamics to violence to the language of the body. As the show of her new series nears its close, we asked Ali about her artistic practice and the motivations behind her bemusing paintings. 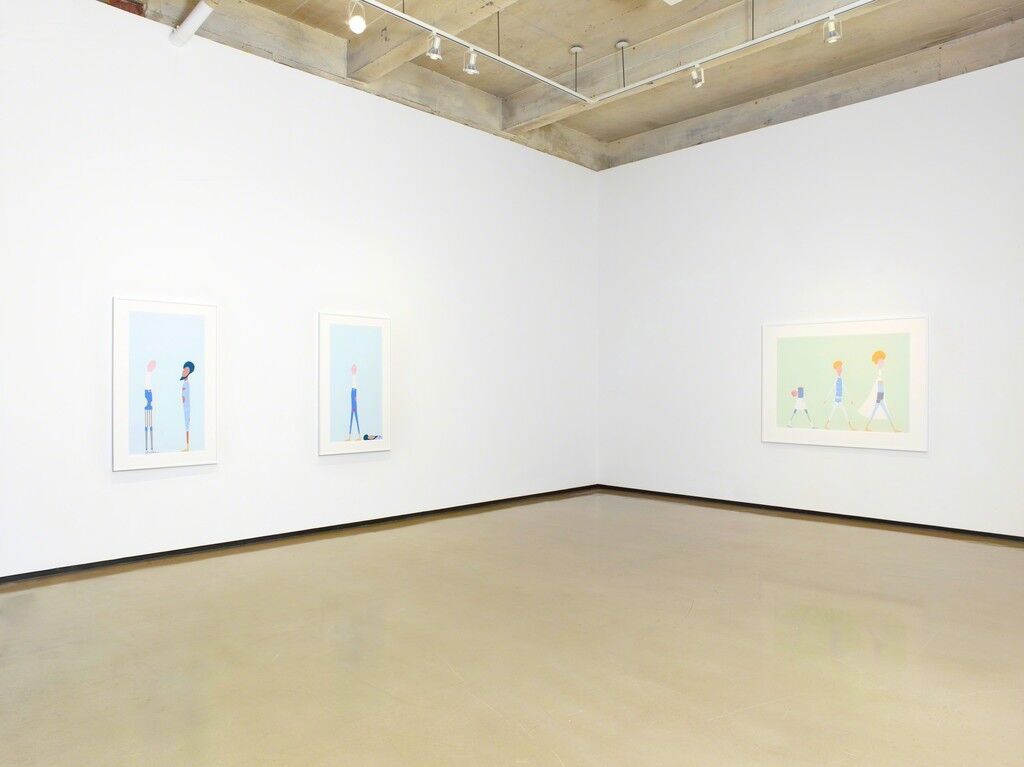 Artsy: Can you tell us about the process behind these works? What is a day in the studio like?
Laylah Ali: Depending on what stage of the project I am in, the process differs. Early on, I am sketching, doing drawings, working out characters, relationships, and connections between the paintings. That goes on for a few months in the beginning. [For this work,] I had just come off of a more research-based online project (John Brown Song! for Dia Foundation) and the paintings needed to absorb that material in a somewhat removed and tangential way. I don’t think of the two projects as explicitly related, but similar questions inform the works.
In terms of what happens in the studio, over time my activity becomes more regimented, more precise. An entire day could be mixing a background color and doing tests of that color, or a day could be devoted to what [the characters] are wearing on their feet, and cross-checking feet. I work on the paintings as a group so they are all brought along at the same time, and they are all finished at about the same time. 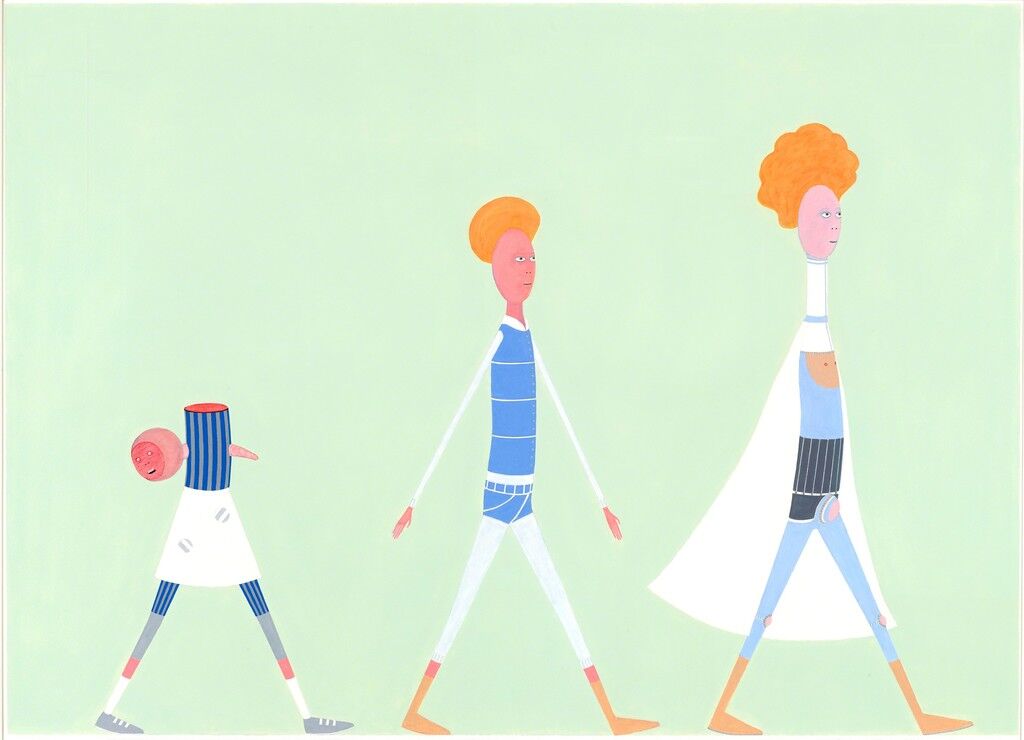 Laylah Ali
Untitled (Acephalous series), 2015
Paul Kasmin Gallery
Advertisement
Artsy: How did “The Acephalous Series” come about? When did you begin this series? What inspirations went into it?
LA: I began this series in earnest in 2013, though I can see that I was working on elements of it back to 2011 as well. After taking a break from painting to do other kinds of projects, I wanted again to look at the role of the 2D figure and how it both eludes written or spoken language and is formed by it. And how bodies become their own language. Freedom, constriction, possibility, opportunity, confinement….
Artsy: How does this series relate to your iconic “Greenheads” series?
LA: The “Acephalous” series is less closed as a system. Perhaps it has more openings for the viewer to enter. This new series could be three generations before or three generations after the Greenheads. Or simply existing simultaneously on another carbon-producing planet. 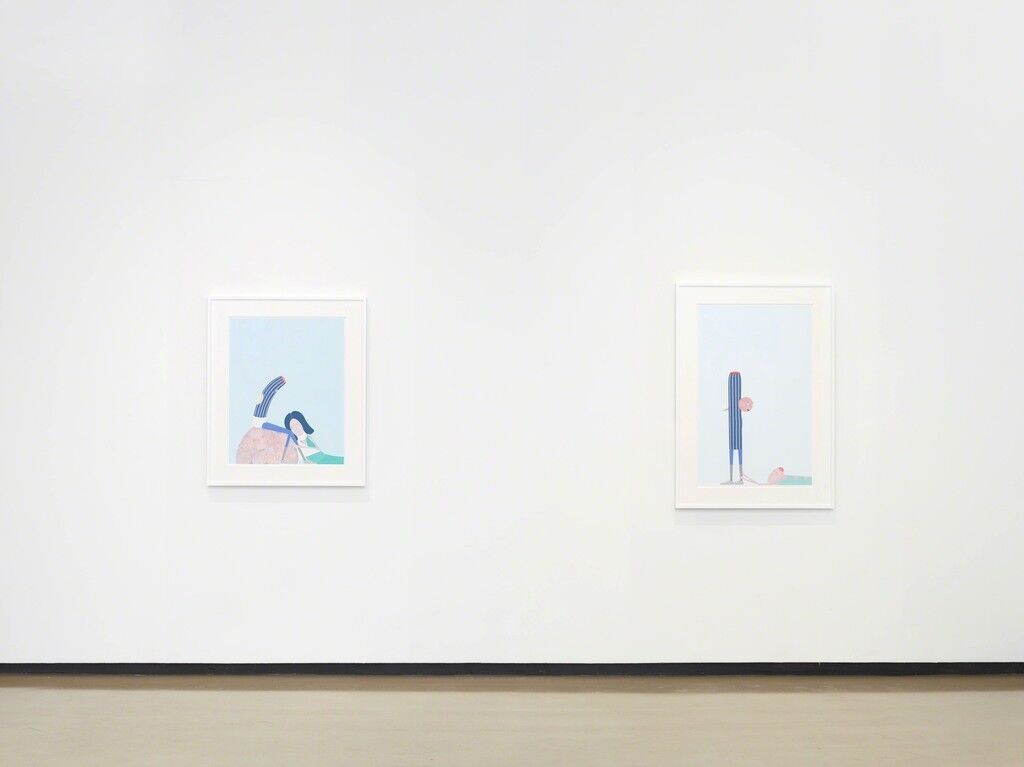 Artsy: Can you tell us about the figures featured in these new works? What are their relationships to one another? Are the power dynamics that were present in the “Greenheads” at play here?
LA: These newer figures are often gendered and vary from each other; there are also stumps of figures that wield at times inordinate control. Some figures are operating without heads. And, unlike the Greenheads, there are moments of what might be called tenderness. Like the Greenheads, desperation is at play: a willingness to self-destruct, to organize or overthrow. The threat of violence and the signs of former violence are present, though not much really happens in the paintings.
Artsy: What emotions and ideas do you hope to inspire in viewers through these works?
LA: I always aim to leave enough space for the viewers to name what is going on in their own way. I want that space to allow for a range of reactions that I might not anticipate. It means I have to relinquish any desire to manipulate the viewer into a particular point of view on these works. I put a great deal of conflicting thoughts, ideas, and emotions into the works, but I can only vouch for that part of it.
Casey Lesser is Artsy’s Lead Editor, Contemporary Art and Creativity.
“Laylah Ali: The Acephalous Series” is on view at Paul Kasmin Gallery, New York, Mar. 25–Apr. 25, 2015.
Follow Paul Kasmin Gallery on Artsy.
Related Stories

Inside My Collection: Schwanda Rountree
Advertisement
More from Artsy Editorial