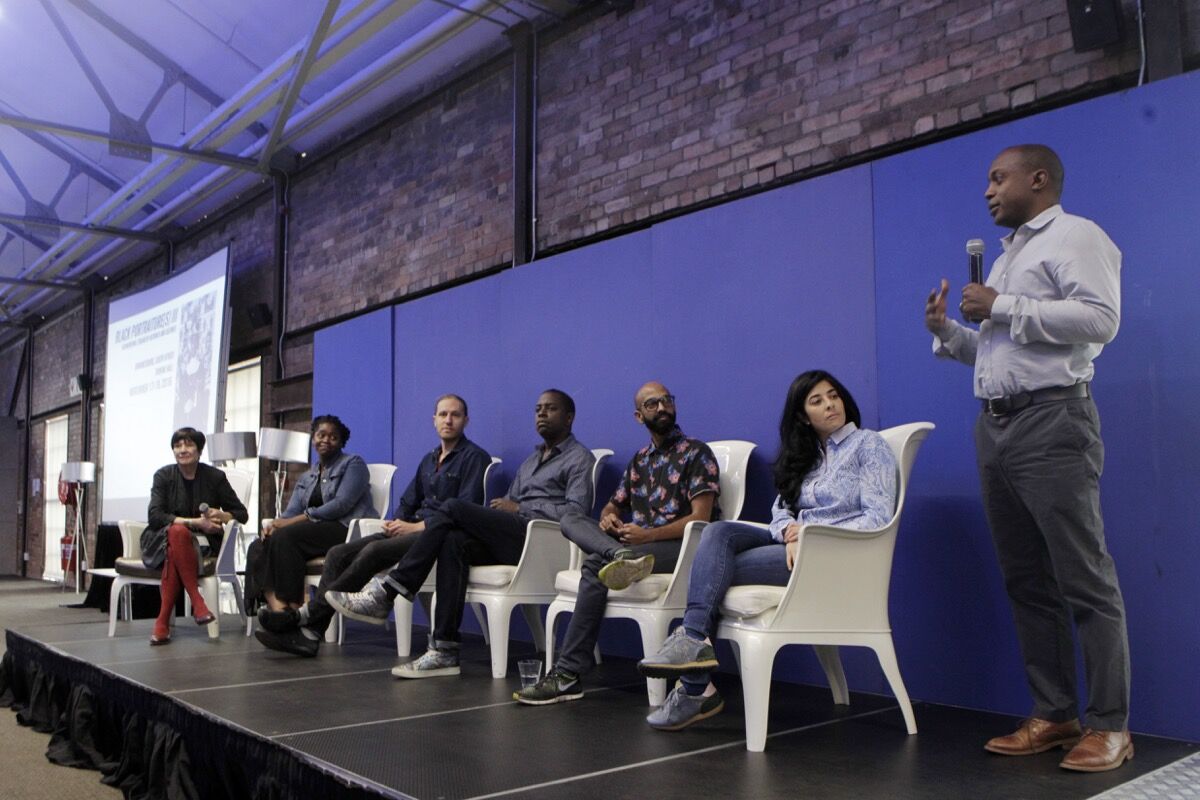 When was the last time you heard boisterous applause or impromptu song led by artists at the opening of an art conference? The protocols at these international talk shops tend to drain any conviviality from proceedings. After declaring their ambitions from carefully raked notes, organizers cede the microphone to on-message sponsors and cultural mandarins whose theme-specific keynotes will gird the bibliographies of future graduate theses.
However, even in the wake of Donald Trump’s astonishing presidential upset and amid ongoing student protests in South Africa, the Johannesburg opening of “Black Portraiture[s] III: Reinventions: Strains of Histories and Cultures”—the seventh in an itinerant art history conference series on the field of black art—was jubilant. Loud cheers greeted Deborah Willis, a New York University art historian and co-organizer of this three-day, 125-panel conference about representing the black body, attended by numerous scholars, artists, curators, and dealers. The majority of the attendees were American, with the rest hailing from South Africa, Benin, France, Nigeria, the United Kingdom, and Zimbabwe, among other countries.
The conference’s opening sessions, held at Johannesburg’s Turbine Hall, included activist and photographer
Zanele Muholi
free-styling on stage. “I’m thinking in Zulu right now, I’m so excited,” she beamed. She then issued an injunction: Everyone had to stand and sing her country’s national anthem, composer Enoch Sontonga’s Nkosi Sikelel’ iAfrika (God bless Africa). This unscripted moment, which included artist
Mary Sibande
joining Muholi at the lectern, teed up the elegant and insightful keynote by artist, curator, and teacher
David C. Driskell
, the 85-year-old éminence grise of the field of black portraiture, who spoke with the air of a veteran preacher.
Driskell, who in 1976 curated the landmark show “Two Centuries of Black American Art” at the Los Angeles County Museum of Art, addressed his 1972 visit to apartheid South Africa. He’d been invited to curate an exhibition of painter
William H. Johnson
’s work at the South African National Gallery in Cape Town, a cultural facility that was open to all races during the apartheid years. The visit included a lecture series, which he agreed to on the condition that audiences were not segregated. His initial surprise at the healthy turn-out at Stellenbosch University, then a bastion of Afrikaner ideology, was punctured when he subsequently learned that the black audience members were university maintenance workers press-ganged into attending. 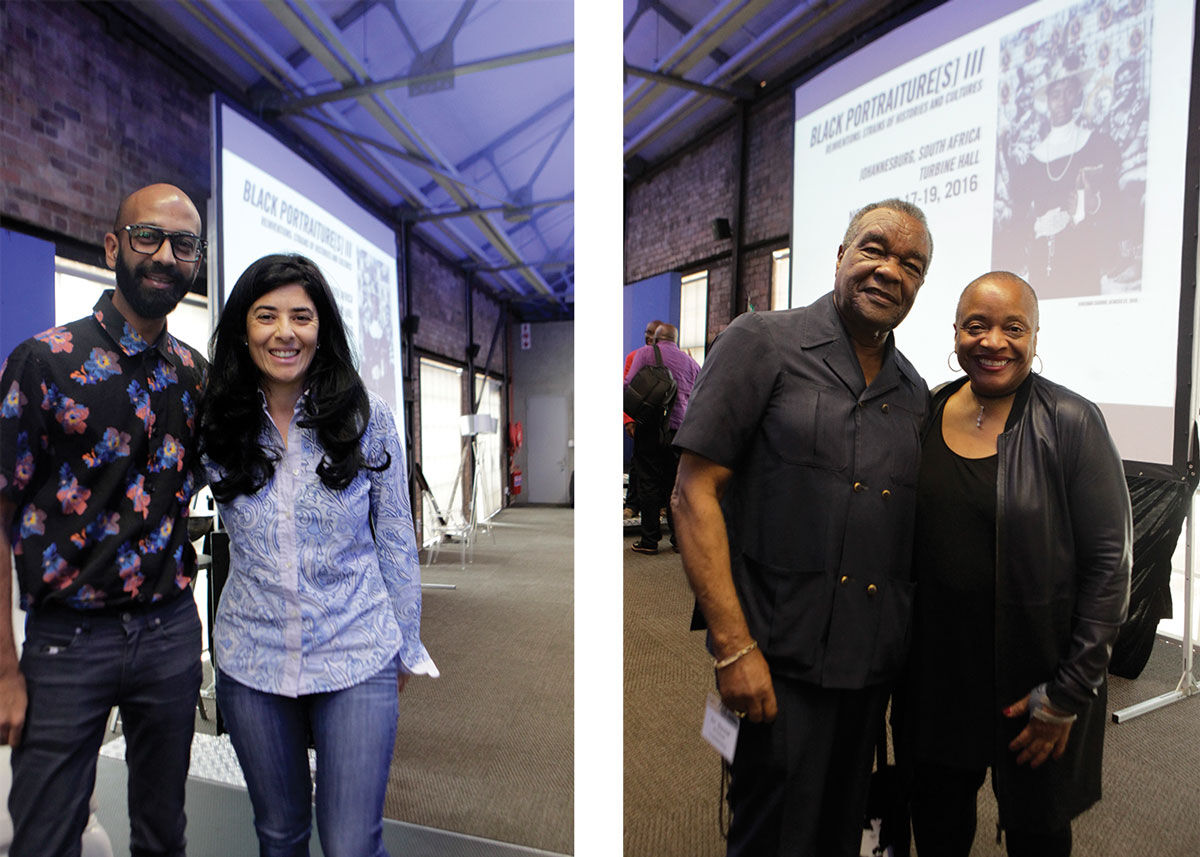 Driskell’s trip was made possible by an idiosyncratic bit of legal acrobatics on the part of South Africa’s white authorities. He was officially classified as an “honorary white,” exempting him from the crueler aspects of race laws at the time. This act of involuntary classification, which he met with “revulsion” and “disgust” at the time, was the fulcrum for his keynote.
“Too often we succumb to being named by others without consent,” he stated. “The act of naming someone without their consent or approval leads to their dehumanization.” Naming, he added, is a potent exercise in power. “What if we are called a wrong name?” he asked. “Too often we have become accustomed to being named by others, and often without retort.” He recalled the “enormous history of naming” he had passed through, from being classified “Negro” and “Colored” to, latterly, African and African-American. “I am proud to own all of them.”
Earlier in the day, New York-based theater scholar Awam Amkpa, who helped organize “Black Portraiture[s] III,” described the event as bringing together interested people “to address and redress questions about our states of being.” Quoting author Toni Morrison, he added: “We speak, we write, we do language. That is how civilizations heal.” The invocation of Morrison was matched by words from Patrick Gaspard, U.S. ambassador to South Africa, who referenced the novelist Ralph Ellison and activist Steve Biko.
Gaspard was born in Kinshasa, the capital of the Democratic Republic of the Congo. He started his professional career as a campaigner for Jesse Jackson’s 1988 presidential bid and has held several offices under Barack Obama. Clearly aware of the febrile atmosphere among the visiting Americans, Gaspard wryly joked about whether the U.S. Department of State would sponsor a black portraitures conference in the future. His remark drew a resigned laugh.
But the ambassador’s mood was not cowed by recent events in the U.S. He spoke of the legacies of segregation and racism shared by South Africa and the U.S., echoing Noam Chomsky who, shortly after Donald Trump’s presidential victory, noted “doctrines of white supremacy have had an even more powerful grip on American culture than in South Africa.”

Advertisement
Artist
Hank Willis Thomas
, who is Deborah Willis’s son, was also in town to co-curate this year’s iteration of the biannual “In Context” exhibition series at Johannesburg-based Goodman Gallery, which celebrates its 50th anniversary this year. He spoke of his visits to South Africa since 2008 as reinforcing a crucial insight. “Blackness is a myth,” stated Willis Thomas. “Blackness here is different from blackness in the U.S. and Europe.” Willis Thomas, whose second collaboration with Goodman Gallery owner Liza Essers includes contributions by
Theaster Gates
,
Rashid Johnson
,
Julie Mehretu
, and
Carrie Mae Weems
, said he preferred to think of blackness as a state of mind and being, rather than a skin color.
The conference covered a broad range of subjects related to images of the black body, including beauty, queerness, activism, police brutality, and sexual politics. In a session on
Afrofuturism
, Detroit-based artist and curator Ingrid LaFleur spoke about the grinding poverty in her hometown, while showing a photo portrait series of “Detroit Africans,” including Malik Yakini of the Detroit Black Community Food Security Network. Fellow panelist Lynnée Denise, a Los Angeles-based scholar and dj, persuasively argued that the dj is a kind of public intellectual with valuable insights into black urban culture.
Johannesburg-based social theorist Achille Mbembe, meanwhile, remarked on the “planetary turn of the African predicament.” Improvising on ideas expressed in a March 2015 talk at the Institute for Continuing Professional Development in Karlsruhe, he spoke of Africa as the last frontier of capitalism. “The forces of tomorrow are seeing it as the last resource for a humanity facing the possibility of its extinction.” He offered his theory of Afropolitanism as a more apt critical tool than Afrofuturism for negotiating the future of Africa.
Afrofuturism, he said, was premised on the “idea of utter alienation.” By distinction, the Afropolitan project is “not about the dream of expatriation but the desire to accept our own being on a continent.” Ultimately, the Afropolitan consciousness, which is self-aware and techno-savvy, is expressive of a continent-wide “reawakening to the colossal nature and extraordinary power and energy of Africa. It is a repossession of that space in order to trigger something for humanity at large.”
This repossession was tangible inside Turbine Hall in Johannesburg, where racial pride among the participants of “Black Portraiture[s] III” was asserted with vigor and solidarity that crossed numerous borders.
Sean O’Toole
Related Stories