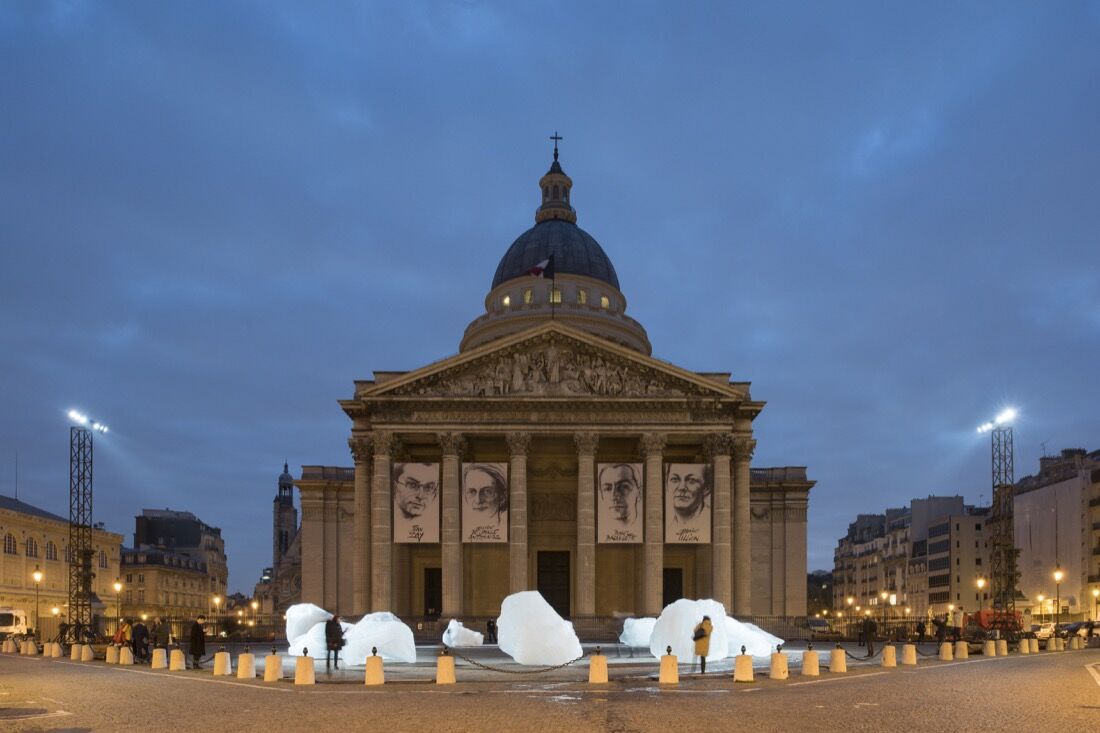 As the United Nations Framework Convention on Climate Change (COP21) began to unfold last week in Paris, Danish-Icelandic artist
Olafur Eliasson
deposited more than 80 tons of ice in the plaza of the city’s Panthéon. Working in collaboration with the Danish geologist Minik Rosing, Eliasson executed Ice Watch Paris, as the piece is titled, by transporting 12 chunks of glacial ice that had broken off from Greenland’s Nuuk Fjord due to rising global temperatures, across great distance and at great expense, before ultimately leaving them to melt in the heart of France’s capital. Poignantly arranged in a circle in front of the neoclassical Panthéon, the chunks echo not only the clock dial that artist intended but also the architecture that supports the great dome of the secular mausoleum behind them. 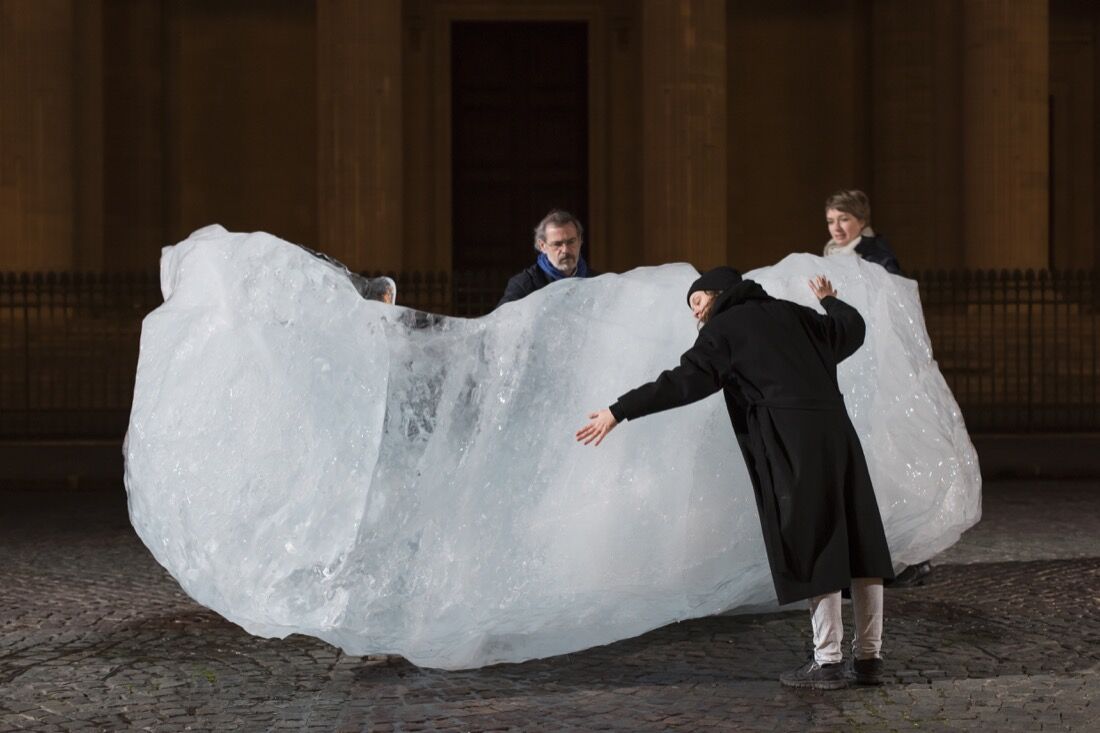 Response to the work has been, at least in circles of the converted, devotional. In videos of the installation, viewers mill about the chunks, snapping pictures, slowly reckoning the size and weight of the ice against their own bodies. Some can be seen tenderly touching and hugging the ice, or drinking its melt. Even San Francisco-based author and activist Rebecca Solnit, whose evocative, water-tight prose has done so much to galvanize people to climate action, marveled at how much attention images of the ice melting received on social media: “Tears of a Greenland glacier,” she called them.
How to assess the impact of this work as it disappears? A virtuoso of light and space, Eliasson is one of those generationally rare artists whose immersive work is both esteemed by critics and adored by the public. But what distinguishes this transposition of glacial melting from the less compelling ones that preceded it at the U.N. climate talks in 2009? Though tears are affecting, “Weeping only takes you so far,” wrote Bibi van der Zee of similar melting sculptures at the conference in Copenhagen. What has changed?

Advertisement
The route to understanding Ice Watch Paris is visible in the melted water that runs across the plaza, coating the cobbles in a wet slick. Less than trailing tears, the run-off might currently be better imagined as blood seeping from stilled bodies. News outlets have been careful to separate the COP21 talks from the recent terrorist attacks that killed 130 people and injured hundreds more in France’s capital. Do not allow, those distinctions urge, the violence, grief, and anger of November to distract from the gravity of geopolitical work that must be shouldered in December. But as climate change, at least in the U.S., persistently fails to register as the human rights and national security issue it is, Eliasson’s Paris installation has a powerful message in which both issues are reflected.
The uncertain intersections of history and human emotions do not allow for events to be parsed so neatly. Planned and unplanned events have colluded in Paris to link these episodes, forcing the psychological effects of each into the heart of the other. Eliasson, for his part, envisions the work through this uneasy connection. “We are bringing ice to Paris two weeks after the attacks,” the artist told the New Yorker. “The values I hold were attacked. My first thought was to respond to the authorities and be attuned to the sorrow. ‘Come,’ they said. The earth is a public space, the space is my host—I am putting ice in the palm of Paris.”

Eliasson’s bleeding bergs recall the way that photographer
Camille Seaman
conceived of her decade-long series of polar photographs, calling images of melting icebergs portraits of individuals “headed to their end.” In the context of gun violence, the dissipation of form and energy into fluid describes our own fragile bodies just as well as icebergs—and reminds of the dependence of human survival on the delicate balance of nature’s elements.
Found objects placed unceremoniously on the ground, the ice chunks inhabit the same off-the-pedestal space of
Danh Vō
’s 2010 work Das Beste oder Nichts, which was nothing more than the engine of his father’s Mercedes-Benz slumped on the gallery floor. There is no closure to be found in these memorial pyres; one is ephemeral, the other, intractable, but their ends are rough, ripped, and jagged. On these grounds, iceberg and engine, both emblematic of climate change, operate like many of the best works of art: by inciting not just a simple relation of object to viewer, but a system of social relations between viewers across time and space. 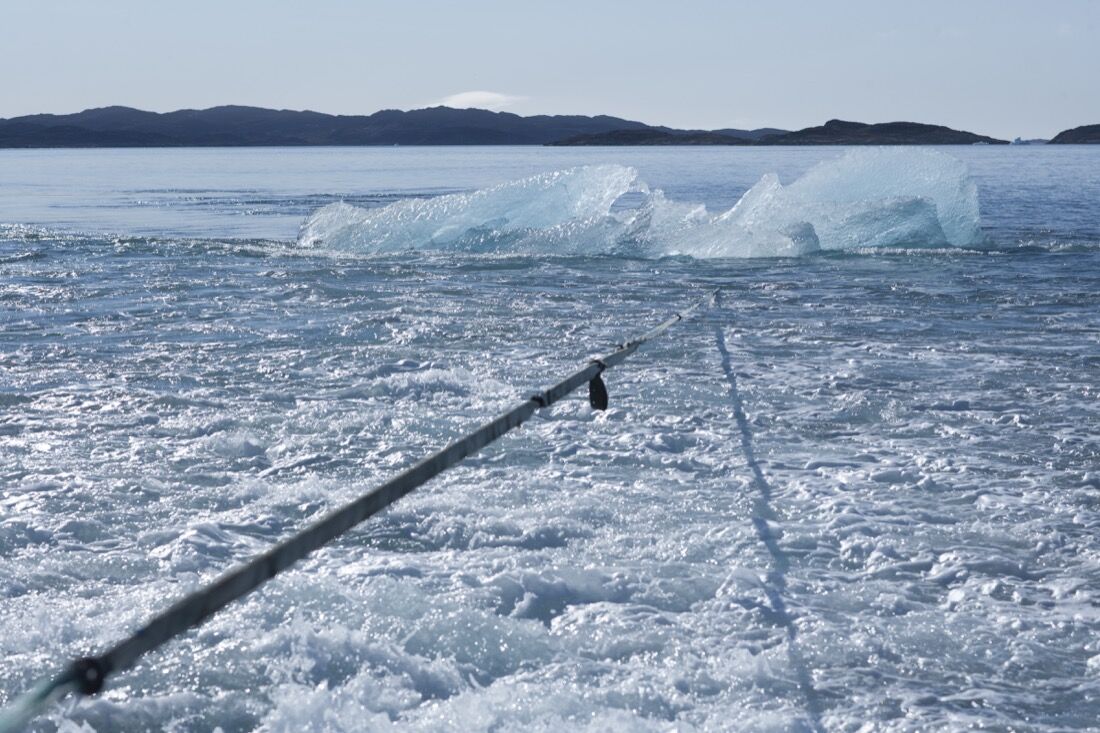 Amidst the tragedy of the terrorist attacks, all French cultural institutions were shut down, as was the photography fair Paris Photo, located in the historic Grand Palais. As participants soberly tempered their business losses alongside the loss of human life, previous exhibitions in the Grand Palais were likely far from their minds. But the 28-foot tall, 265-ton Arctic iceberg that the fashion brand Chanel had erected at the same site as a slick runway for Fashion Week in 2010 looks different now, refracted through Ice Watch Paris. The pathos of Eliasson and the decadence of Lagerfeld mark different poles on the spectrum of artistic creativity, but both are significant episodes in the increasingly atmospheric aesthetics of climate change.
Viewing these two Parisian installations of icebergs, as different as they are, on the same page is a model for how we might juxtapose the November 2015 attacks with Ice Watch Paris. A great challenge of art, which climate activist art feels acutely, is taking what is large and dispersed and rendering it on a scale that a single human can make sense of. The collisions of circumstance have brought climate change and terrorism together in the relatable social space of loss, collisions that threaten to multiply in the future. For a historic moment in Paris, human tears mix with the tears of the glacier. 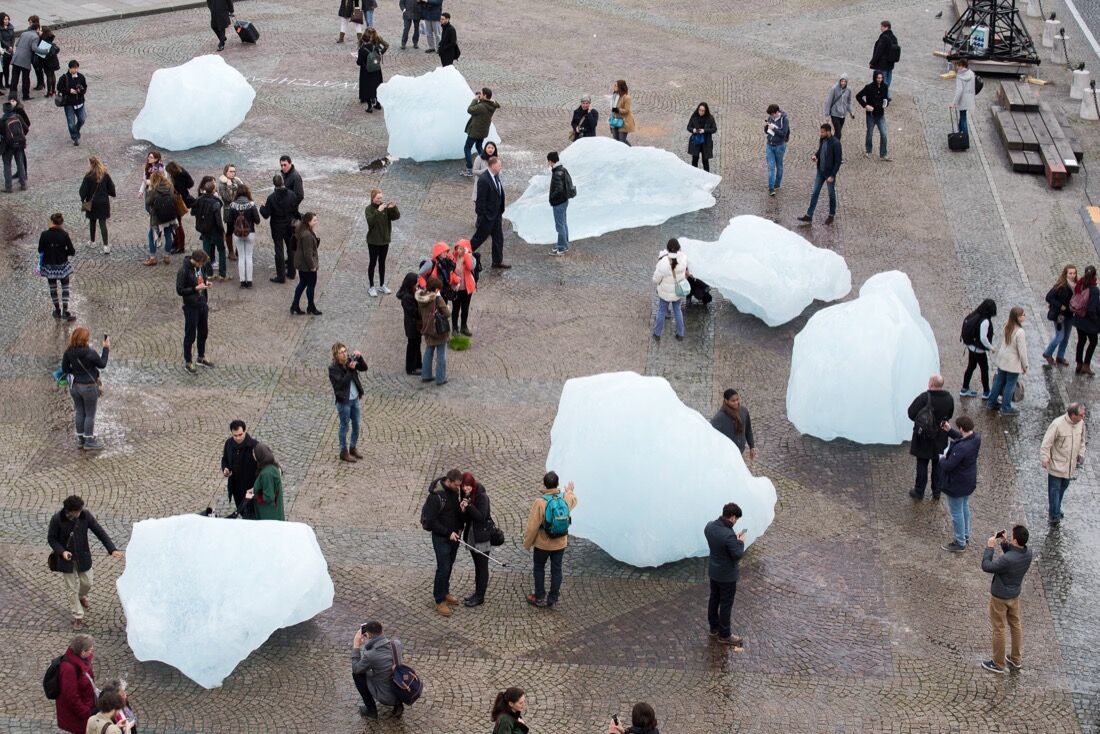