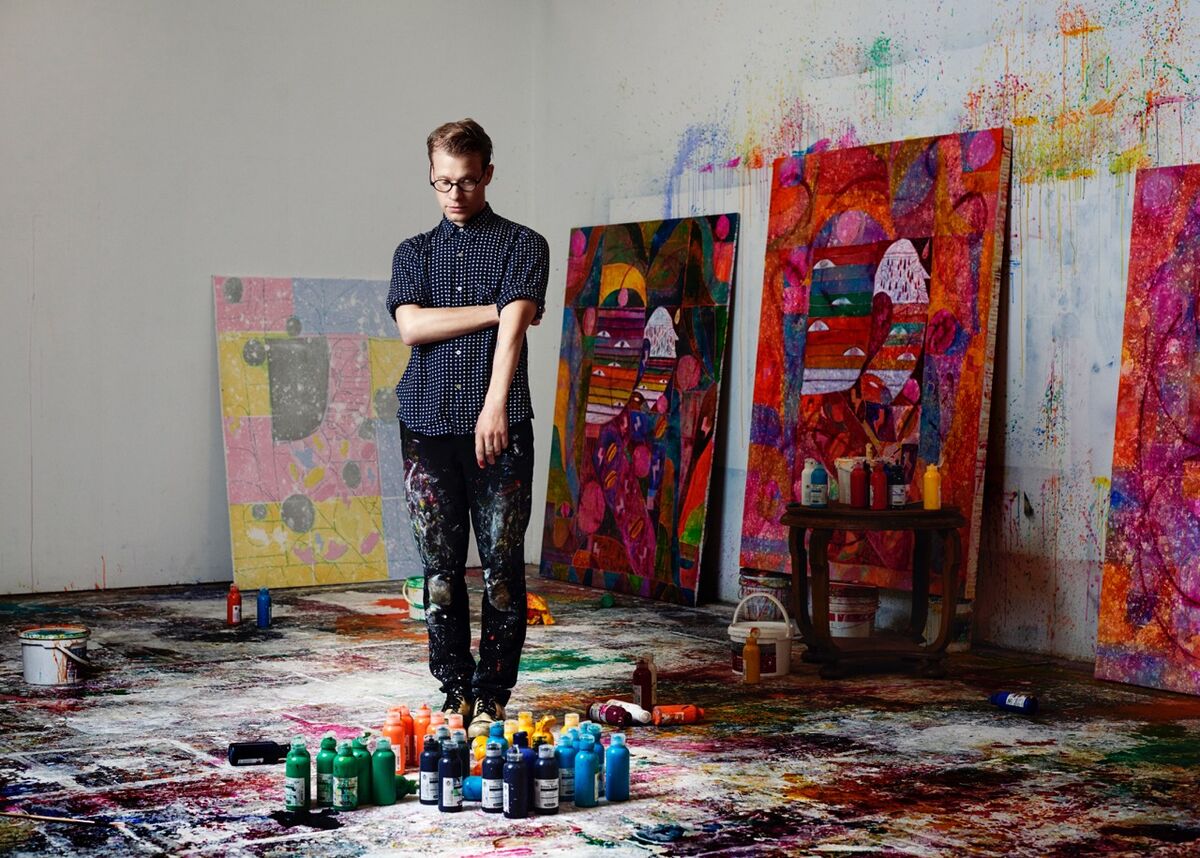 Despite the fact that artist
Alexander Tovborg
identifies with no one religion, and never has, he is engrossed in religious experience, mythology, and spirituality. Tovborg constantly reads, attends services, embarks on pilgrimages, and speaks with devout individuals. In fact, while preparing for his latest exhibition, he spoke with the Virgin Mary. “I was talking with Mother Mary through an American man who was a medium and can channel the great masters: Moses, Jesus, Buddha, Michael the archangel, and Mary,” he recalled. “Whether you believe it or not, he believed it, and his belief is something that I fully respect and take seriously.”
Regardless, Tovborg was taken by the thrust of their conversation: “She said that there’s no right or wrong in religion; it’s so subjective, and everyone has their own religion and their own idea of what is religion.” Tovborg’s paintings—vivid, large-scale acrylics on felt, in jewel tones that make use of a carefully crafted, highly symbolic visual lexicon—gracefully and imaginatively embody the human experience of religion. Each new series marks a fresh attempt at objectively visualizing an aspect of a belief system. Tovborg’s pure curiosity and lack of judgement bleed into the works themselves, making for endless intrigue. 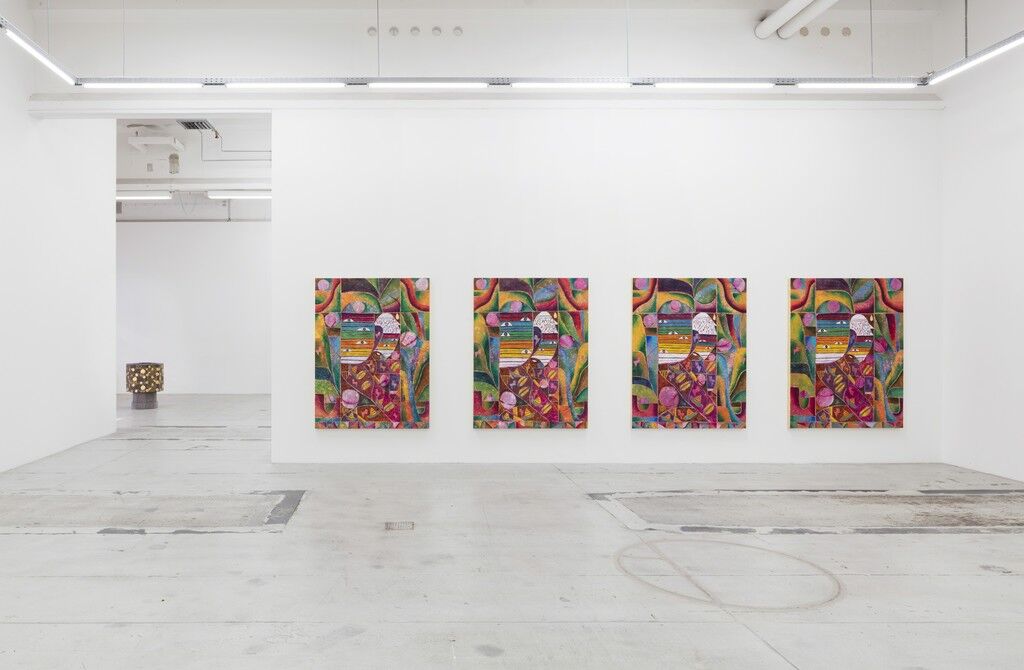 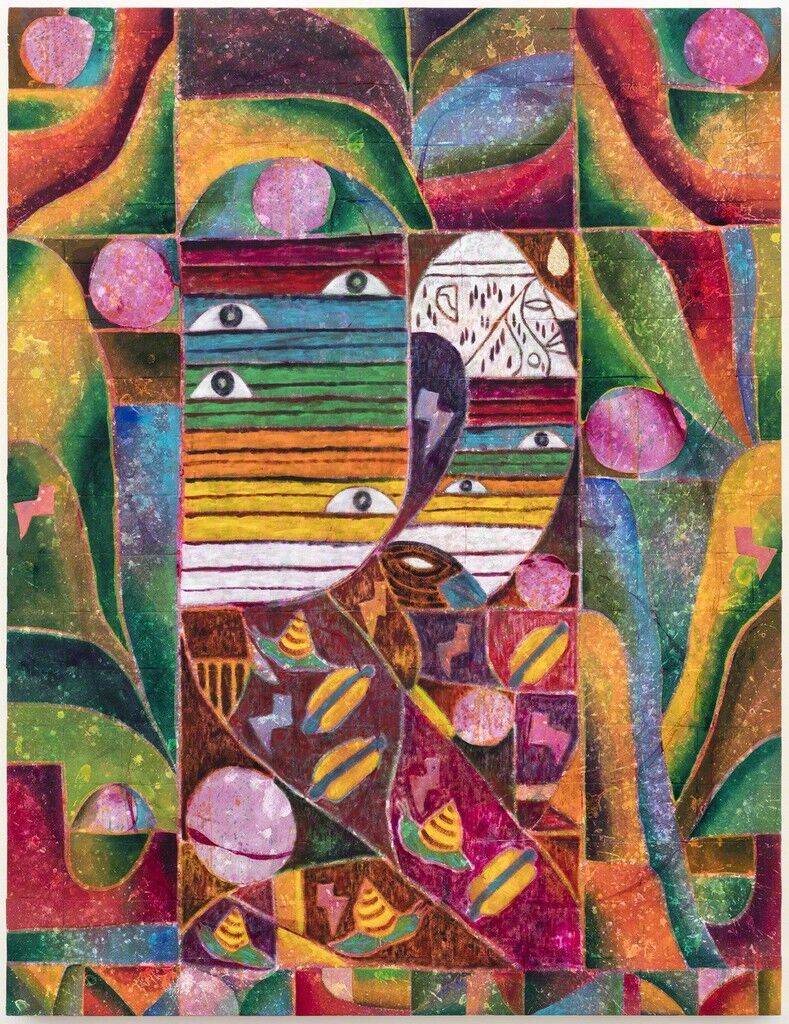 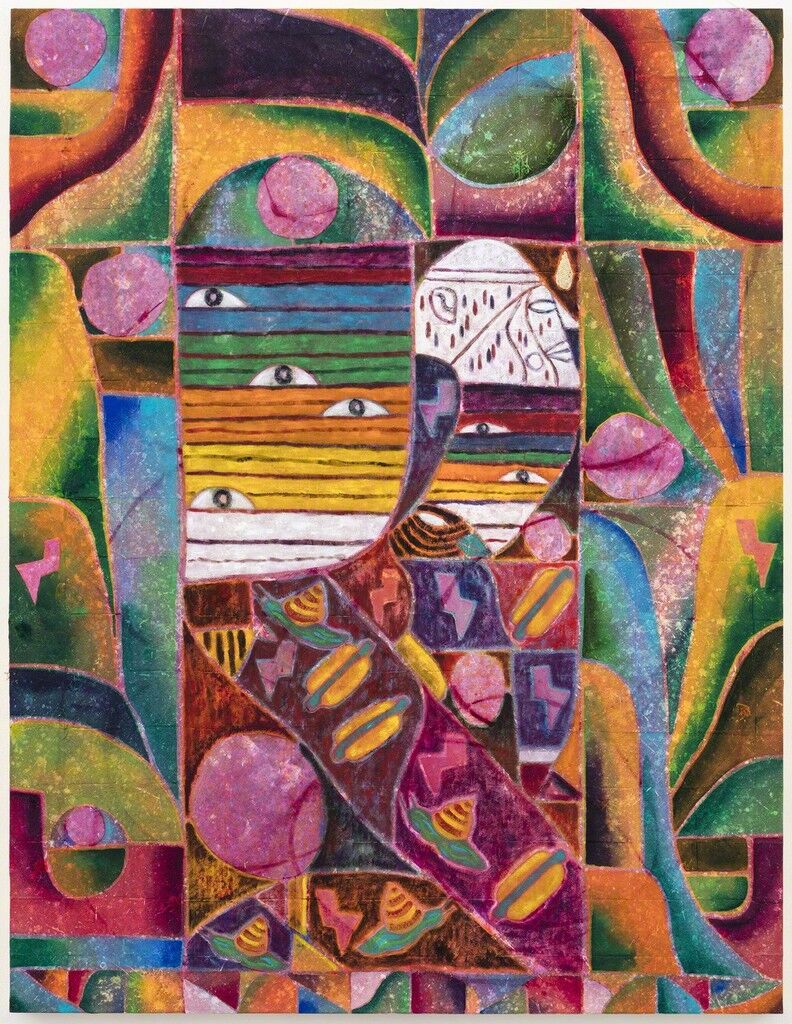 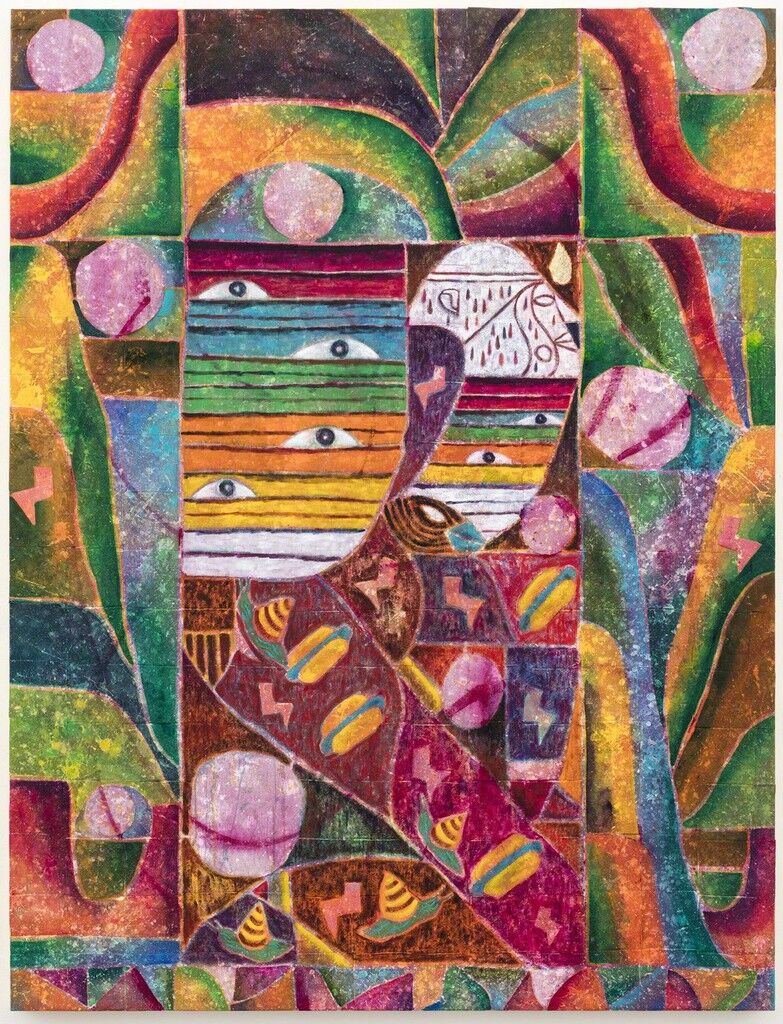 Alexander Tovborg
Prometheus (VIII), 2015
Galleri Nicolai Wallner
“I think that religion is like a big piece of clay that is cast in small lumps all around the world and has landed in the Middle East, in America, South America, Europe, Africa...” he said when asked if he agreed with what the Virgin had said. “It’s the same consistency, it’s the same piece of clay but it’s just due to the geopolitical situations in these parts of the continents that the shape of the religion is differently formed.” It’s the way that humans respond to and relate to the concept of religion emotionally, and the universality of this phenomenon, that inspired “myten er en tilstand,” (which roughly translates to “myth is a state”), Tovborg’s new exhibition at Copenhagen’s Galleri Nicolai Wallner.

First-hand experiences with the rituals of Buddhism, Catholicism, and various Protestant and missionary churches have led him to recognize the central role that artists have played for centuries within religious spheres, largely influencing the physical experiences of various religions. “When we enter a church we feel small, if it’s a Christian church, and when you sit down you sit on a hard bench, so you feel like you really have to be aware; there are symbolic colors in religion, there’s gold leaf if it’s someone of importance,” he noted. “All these things are choices that are more or less created by man, and especially artists. And that is what I find so interesting in religion, is the way we try to grasp, as artists, the idea of the immaterial.” This interest becomes palpable upon viewing his art.
For the new show, Tovborg homed in on the protagonists of religious narratives, particularly myths, prompted by his own personal reactions to them. “I felt a pattern regarding how I relate to myths, through emotions and feelings, through the hero of the story, the things that the character went through, I related to as a human,” he explained. “I decided to do a show on how we relate to religious stories through emotions. This is what makes humans so bound to religion and mythology: we are most human when we are in contact with our emotions.” 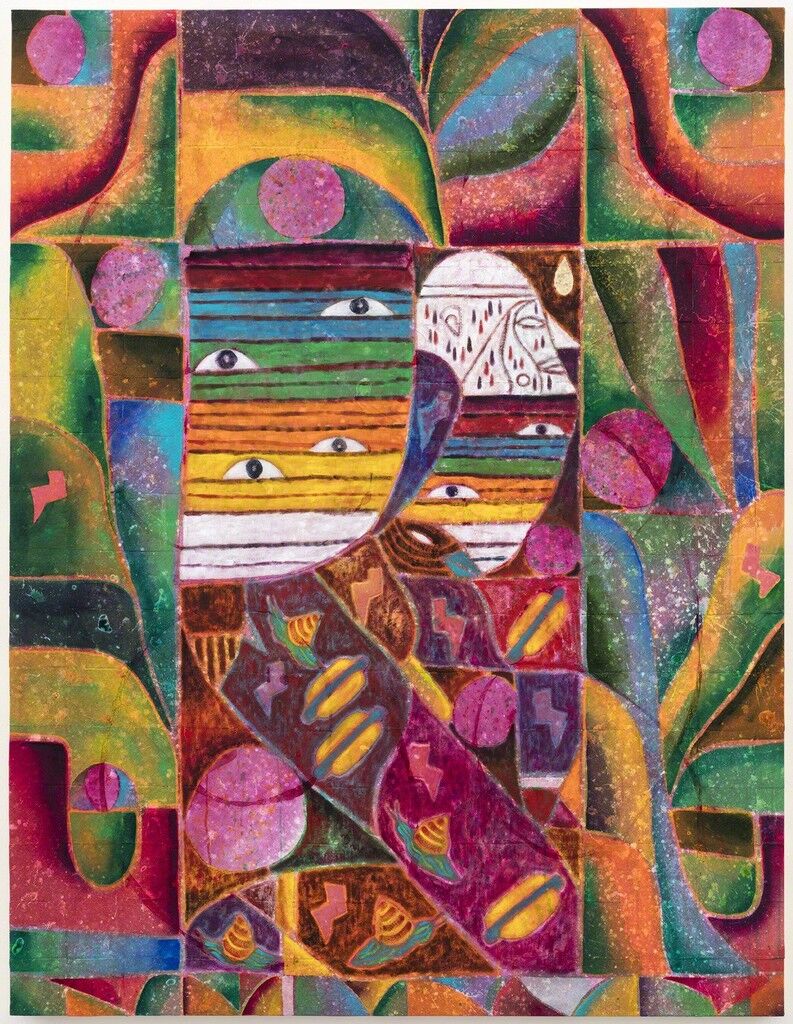 Alexander Tovborg
Prometheus (X), 2015
Galleri Nicolai Wallner
Advertisement
The Greek myth of Prometheus—the story of the titan who established mankind and stole fire from Mount Olympus, leading his punishment by Zeus and enchainment in the Caucasus mountains—is at the core of the current show. Intrigued by the story and its hero’s sacrifice, especially in its parallel to that of Jesus, preparations began through pilgrimage this past spring. Tovborg ventured to the supposed site to which Prometheus was banished, in modern-day Georgia. He found Prometheus’s cave (a kilometer-long cavern he described as “cathedral-like”) and spent a week there, taking in the space and the landscape. He collected two liters of water from within the cave and took it with him, inspired to create a vessel for it. “I decided to carve a baptismal font in stone; I made a motif on it of Prometheus and angels trying to open up the mythologies to other religions, including Christianity,” he explained. “This is the first work that you will encounter at the show, like when you enter a church, where you can take holy water; this is how the show begins.” 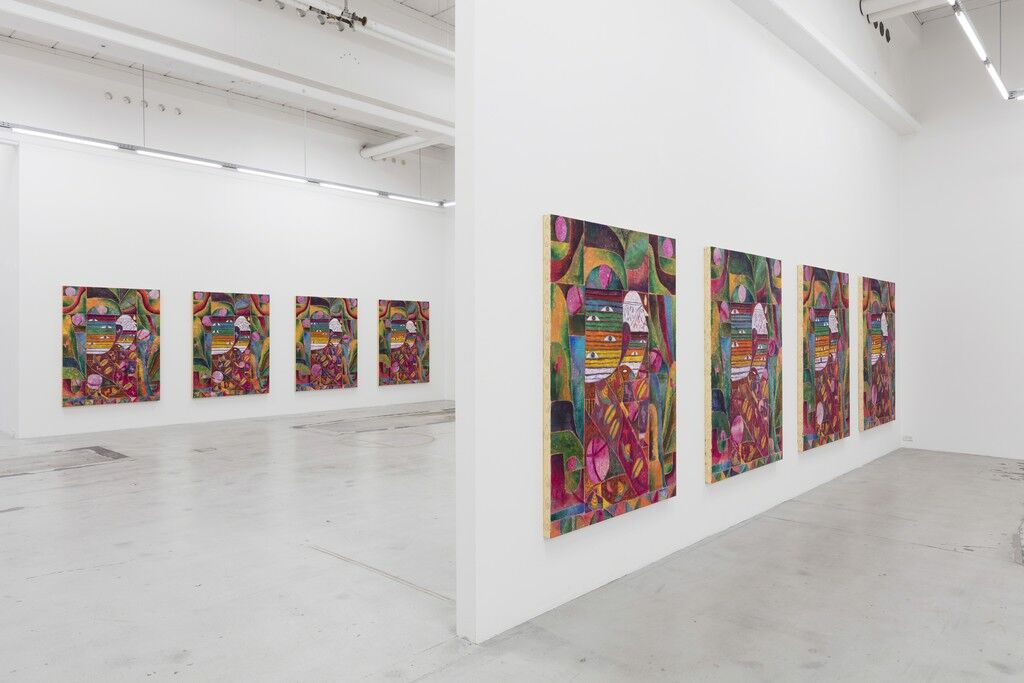 Eight vivid paintings form the basis of the exhibition, their rich colors practically effervescing on the gallery’s crisp white walls. All take on the same motif, yet are slightly different from the next. “I tried as much as I could to be precise, to repeat not the image but the feeling of the image,” he said of the repetition, which he went to describe as much an exercise in precision as an allusion to history repeating itself, which is reflected in the way the show is designed, guiding visitors in circles around the gallery space.

The works depict Prometheus within the cave in a composition appropriated from
Gustave Moreau
’s 1868 painting of Prometheus. “I found his motif inspiring, and modified it based on my experience from being in the cave; the colors are carefully chosen from the lighting there,” he noted. Each of the eight paintings is filled with an assortment of multifarious symbols, namely eyes, flames, snails, and hot dogs. The eyes, a recurring image found in his past paintings, are “a symbol of the eternal, of time, or the divine,” and the flame, a teardrop of gold leaf, refers to Prometheus’s heroic act of delivering fire to mankind. The hot dogs, while completely unexpected, are meant to introduce an auditory element to the work; they’re meant to evoke the sound of biting into a hot dog, a sound that resembled the noises he heard while in the cave.
The snails, in addition to being an indicator of time, evoke the time Tovborg recently spent in Assisi, determined to channel the small Italian town’s namesake St. Francis of Assisi, through preaching to the birds at the famous basilica. “I preached about love to the birds so they would fly out and spread the word. And then once all the animals were informed about the revolution of emotions, we went inside of the church to preach to people,” he explained. The day ended with a meal, which for Tovborg, was a bowl of snails. “I felt really terrible, and I realized I would pay respect to these animals, so I dedicated one day where I just followed one snail around a little area,” he recalled, and it’s the experience that followed that the snails in the paintings represent. “I found poetry in its movement, its ability to always be present and in the now.” 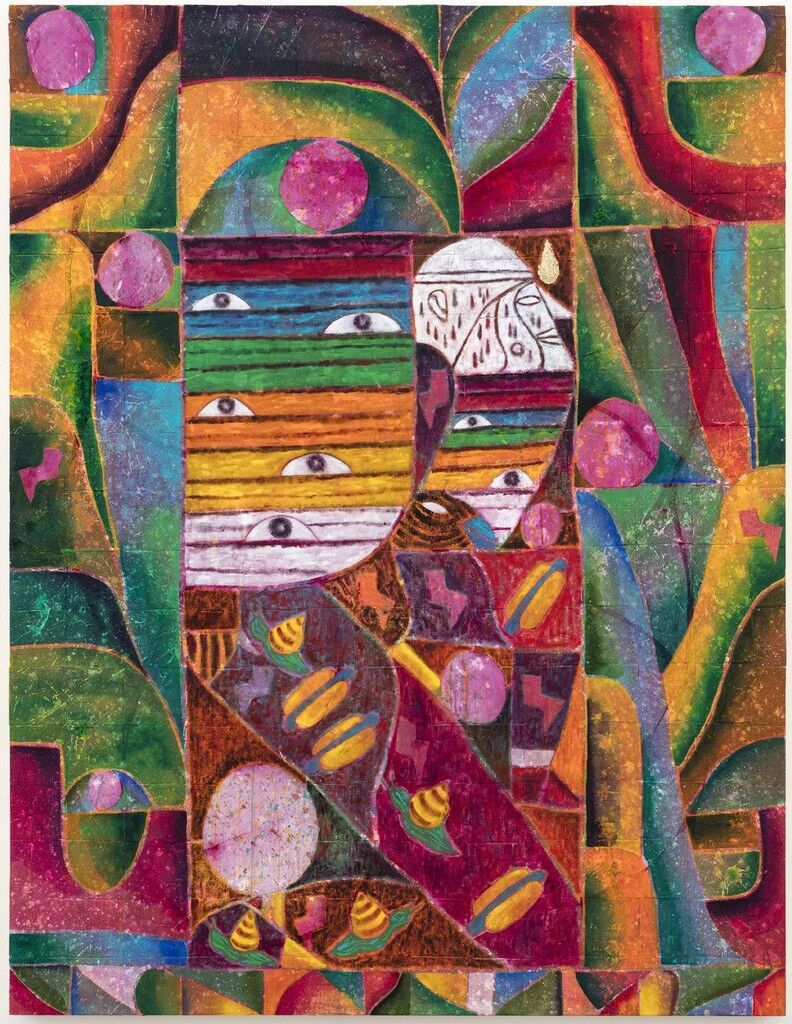 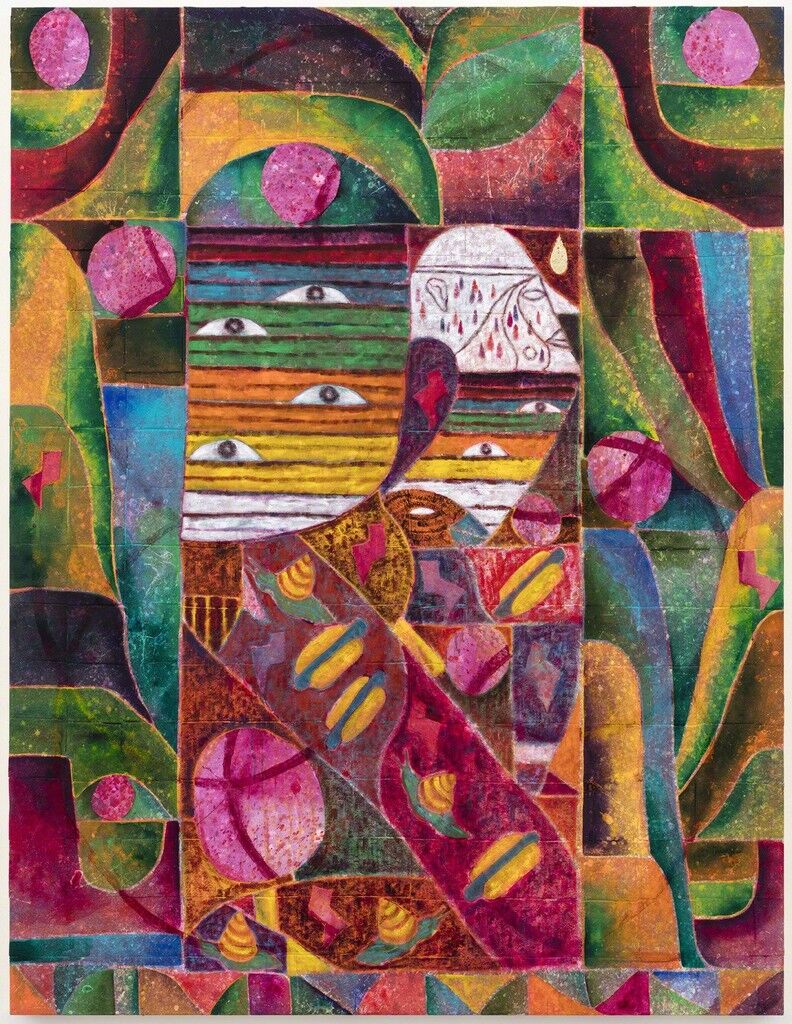 Alexander Tovborg
Prometheus (VII), 2015
Galleri Nicolai Wallner
So where will Tovborg venture next? “I was thinking about going to Malta next time, to go to see the last stop of the Crusaders,” he told me. Confirmed for the near-term is an exciting slate of upcoming projects, including commissions for a church and a monastery in Denmark, as well as a group show at Nicelle Beauchene in New York. It seems as though the future is boundless for Tovborg, now in his early thirties, in terms of ambitions and possibilities in general. After recounting his exchange with the Virgin Mary, he went on to share the details of a visceral experience that happened a week later, when he went into trance hypnosis to seek out his guardian angel. In the end, he explained, “I went out of my body and looked at myself, and knew that I was being healed.” After a pause he added, “It must sound a little strange, but you should try it.” Virtuous and bold, just like his art, Tovborg certainly makes a case for keeping an open mind.