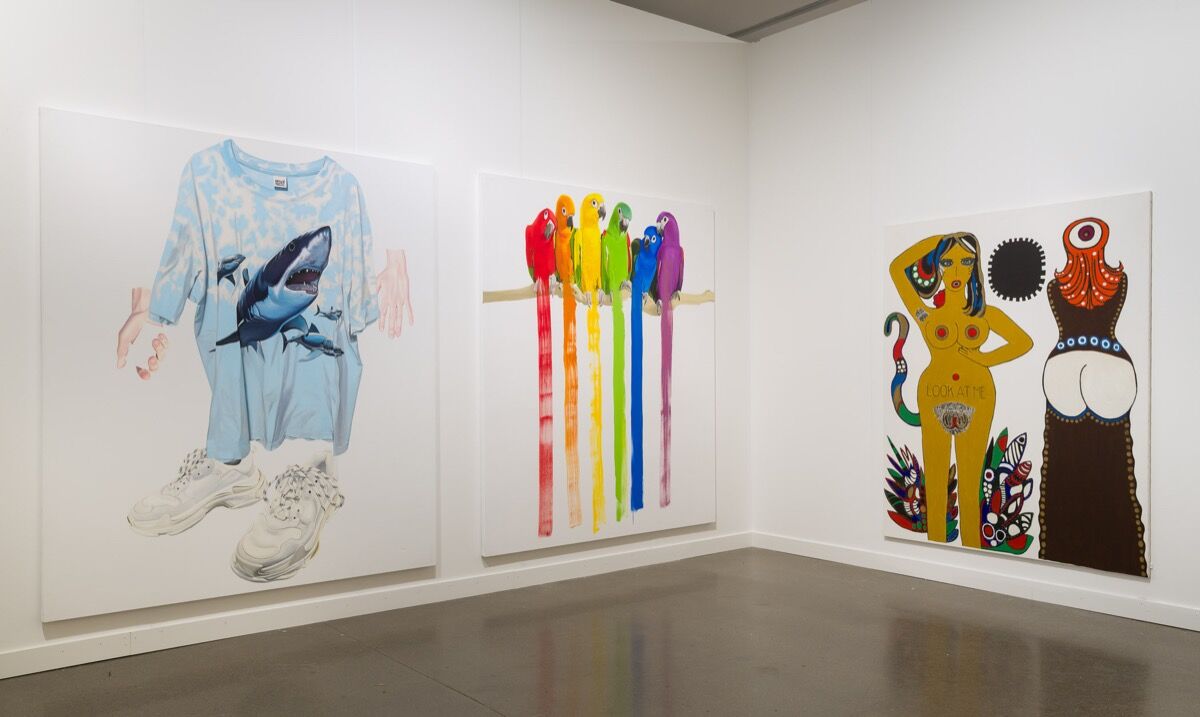 Independent, now in its ninth year, is most certainly an art fair. There are galleries, and there are collectors buying works from galleries. But it’s marked by the fact that it doesn’t quite feel like a fair. The frantic din of thousands of collectors talking over each other, characteristic of most fair openings, is absent at Independent. Instead, people hawk their wares here quietly enough that you sometimes forget things are actually for sale. Booths come in a variety of weird shapes and sizes—nothing looks faintly like a grid in a convention center. This is all, of course, a calculated move by Independent’s initiators.
“From the beginning we said, ‘no aisles!’” recalled Elizabeth Dee, the gallery owner who is a co-founder of the fair and acts as its CEO.
It was Independent’s VIP preview Thursday morning, and Dee was standing on the fifth floor of Spring Studios, the Tribeca venue where the fair has alighted each March since 2016. (Owned by the creative agency Spring, it also hosts shows during Fashion Week and boasts a new social club, Spring Place.) Before that, the fair was held in the old Dia building in Chelsea (currently the temporary home of Hauser & Wirth), and for the last two springs, it has held an iteration in Brussels; this year, that fair was moved to November.
Nearly a decade in, Independent’s mission has calcified: to allow blue-chip dealers to co-exist next to small, emerging galleries, and to allow established artists to have work a few steps over from the new vanguard. 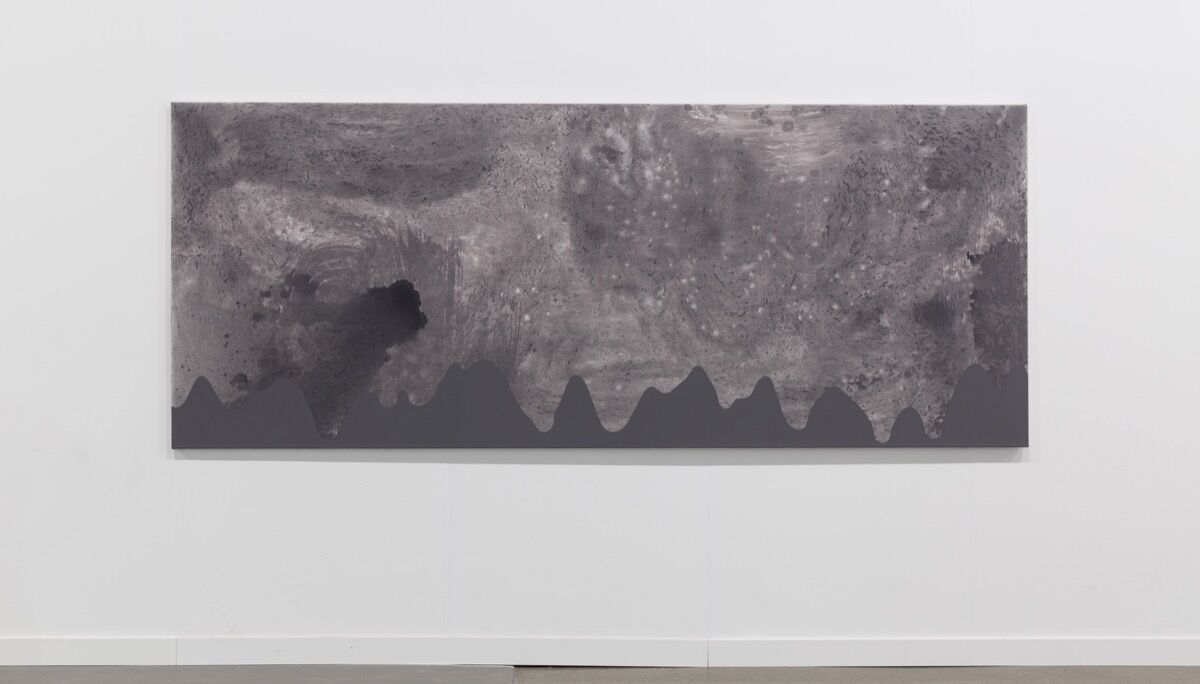 “Every generation has a fair that responds to the fair landscape, and does something different,” Dee said, noting that her model when she was dreaming up Independent was the Unfair, which was staged as a response to Art Cologne in 1992 and 1993, giving those who were excluded from one of Europe’s most prestigious fairs the chance to show in an unorthodox environment, and didn’t overwhelmingly favor the collectors.
“We wanted to do a fair that artists wanted to participate in, that artists wanted to make work for,” she said. And they have.
Dee is showing a few new
Carl Ostendarp
gouache works (she’s a player-coach on VIP days). A booth away, there’s two new paintings by
Eliza Douglas
put up by Air de Paris (one shows a couple of toucans in various blazing tropical hues). Steps away, a zany
Cary Leibowitz
wall work, featuring circular pie charts graphing out the anxiety of his consciousness in brash colors, takes up the whole wall of Invisible-Exports’s booth. Beside it is a long table full what appeared to be ceramic works posing as kitchen china—bowls, coffee mugs, platters of all sizes—on which Leibowitz had scribbled in childlike handwriting: “I want a hero sandwich,” “I’m shy,” “Schadenfreude.”
Douglas graduated from the Städelschule in Frankfurt less than a year ago, and Leibowitz currently has a solo show at the Institute of Contemporary Art, Philadelphia: the emerging next to the emerged.
There’s also older artists to rediscover: take Marlborough Contemporary’s booth of new paintings by
Werner Büttner
, the German artist who palled around with
Martin Kippenberger
and his gang in the 1990s and inspired his now-more-famous compatriots. (A printed-out interview between the artist and Hans Ulrich Obrist placed next to the booth explains that he decided to be an artist after he had a one-night stand with a woman, and then was introduced to her roommate,
Albert Oehlen
.) Büttner is represented by Frankfurt’s Galerie Bärbel Grässlin and has shown across Europe, but he hadn’t had a show in the states until a year ago at Marlborough Contemporary’s space in Chelsea. 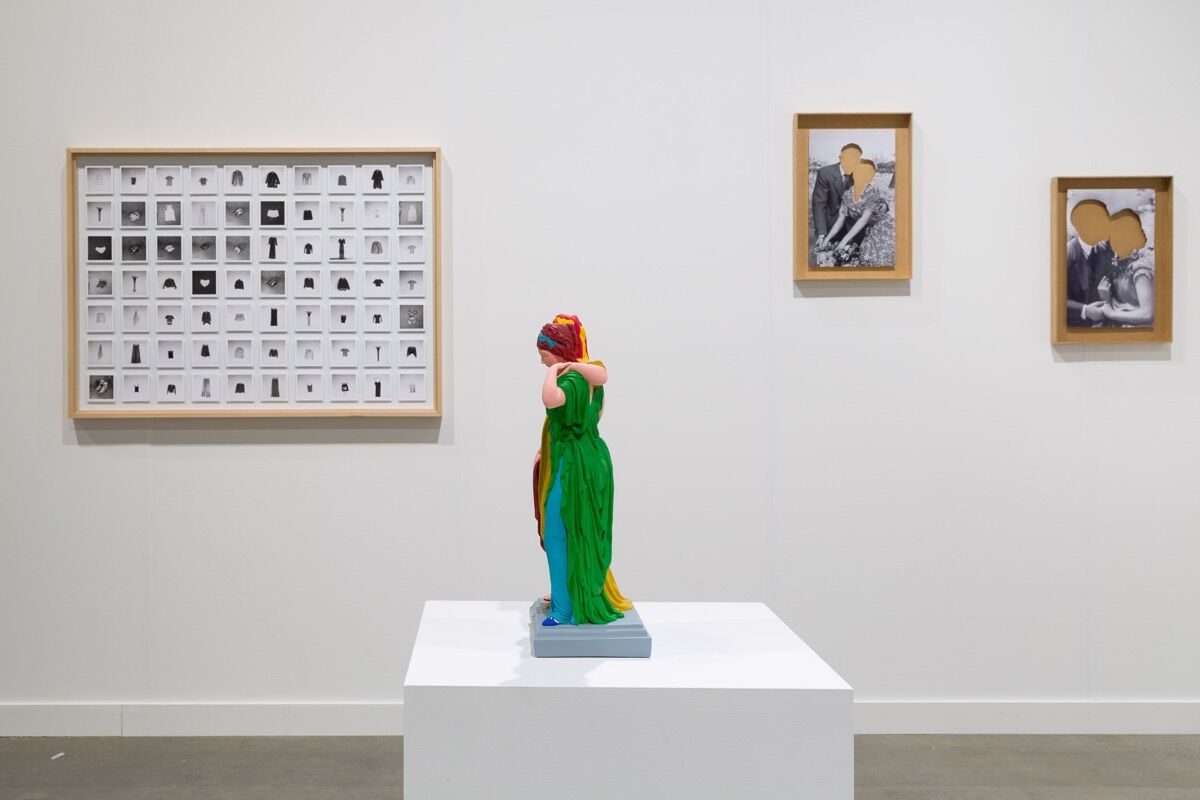 Advertisement
“He’s really the genesis for Kippenberger, and a huge influence for people like Michael Williams,” said Marlborough director Max Levai, who then pulled out the book they put out in 2016—the first on the artist in English—and showed pictures of Büttner carousing around Hamburg, Berlin, and Cologne with the era’s leading party animals.
Levai was clearly taken by the history, and it’s great stuff for Kippenberger-heads to nerd out on, but here, it’s just another hook to sell the work—the ostensible purpose of any art fair, even one that feels like an exhibition. The new paintings are on offer for $60,000 per canvas, and a big self-portrait from 1986 was $180,000.
Some Independent galleries had dispensed with business early in the preview, selling all or most of the work within the first few hours. Among those, Clearing placed all of its new
Harold Ancart
painted-wood sculptures with collectors, and David Kordansky sold nearly all its sculptures by the Los Angeles artist
Ruby Neri
, including the giant Women Playing with Dolls (2017), which was $32,000, and Among Flowers (2017), which was $28,000.
“It’s a very exciting fair—it feels like an exhibition space, it feels curated,” said Mera Rubell, the Miami collector who was making the rounds with her husband, Don, but wouldn’t say whether they had purchased any of the work on display. 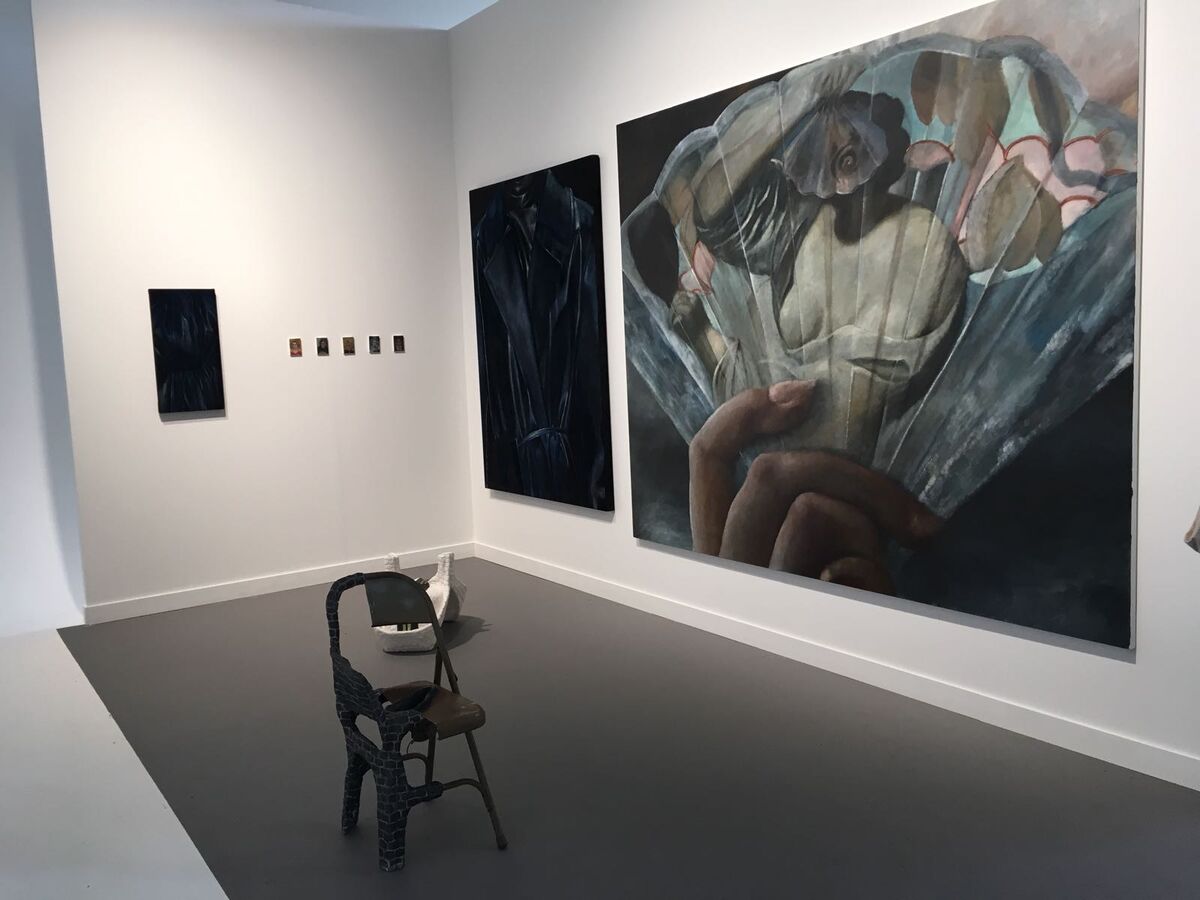 Chapter NY director Nicole Russo said she sold two slyly
Surrealist
chopped-chair sculptures by
Ann Greene Kelly
, one for $4,500 and another for $5,000, from the space she was sharing with London’s Carlos/Ishikawa. Wedged by an entranceway, it was not a typical fair spot: her booth somewhat bled into a soft white slope that vaguely resembled a work by
Doug Wheeler
.
“Someone actually asked, ‘Is that a Doug Wheeler?” Russo said. “Why would I have a Doug Wheeler in my booth?” (The artist is represented globally by David Zwirner.)
The booth has something that’s maybe better: In Carlos/Ishikawa’s portion, dealer Vanessa Carlos has installed a fabulously chic paint-on-velvet work by
Issy Wood
, a young up-and-comer making her New York debut. Wood also gifted the world some sub-postcard-sized paintings of Joan Rivers, which could have been yours for $1,400 on opening day.
Other petite works are on view at the Martos Gallery booth. Small car sculptures by the late
Kathleen White
are installed on little platforms, next to four small, enigmatic paintings with painted frames that Martos director Ebony L. Haynes said she stumbled upon in White’s studio, a rare find. 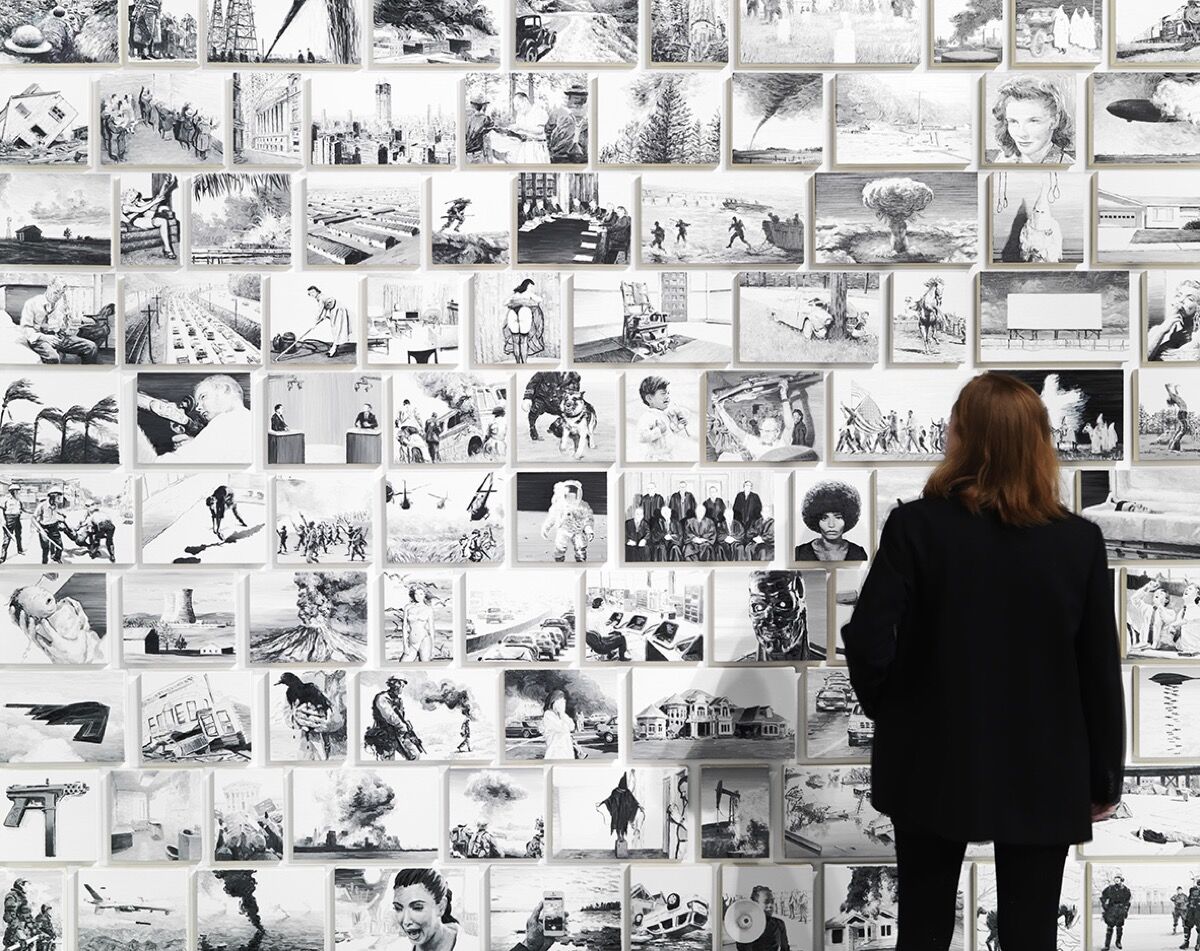 Cynthia Daignault, What Happened, 2018. Courtesy of The Sunday Painter.

A series of small canvases by
Cynthia Daignault
at The Sunday Painter actually make up one single, big work. Titled What Happened (2018)—“the same name as Hillary Clinton’s book,” a gallery rep noted—the work also came with a big price tag: $120,000. But it sold just hours after Independent opened. It’s a pretty remarkable thing to behold, dozens of canvases that track the last 100 years of living in America, from the Vietnam war to Kim Kardashian, all rendered in Daignault’s painterly reverence, all in black and white.
Around the corner on the ground floor, Magenta Plains embodies the Independent ethos within a single booth. The gallery just turned two, and only today announced its official artist roster. At the fair, it’s showing work by
Steven Parrino
, who has a well established market, next to sculptures by emerging artist
Anne Libby
, along with the East Village art scene figure
Peter Nagy
, and
Don Dudley
, who is nearly 90 years old.
Director Olivia Smith said the gallery had sold much of the booth, including one of Libby’s enchanting gear-stuffed sculptures for $4,500, and several Parrinos for up to $25,000. Smith said that Independent, like the gallery’s program itself, offers as much important, broader context for its older artists as it does for the younger ones.
“They’re here because they want to show with someone younger,” she said.
Nate Freeman
Related Stories