Artsy Editors
Apr 20, 2016 7:58pm
The much-anticipated inaugural edition of Independent Brussels opened on Wednesday. Run for dealers, by dealers, the fair debuted in New York in 2010. It was an immediate hit with participating galleries. And, considering the unmatched spirits during the fair’s opener in the Belgian capital, that success looks posed to continue across the Atlantic. 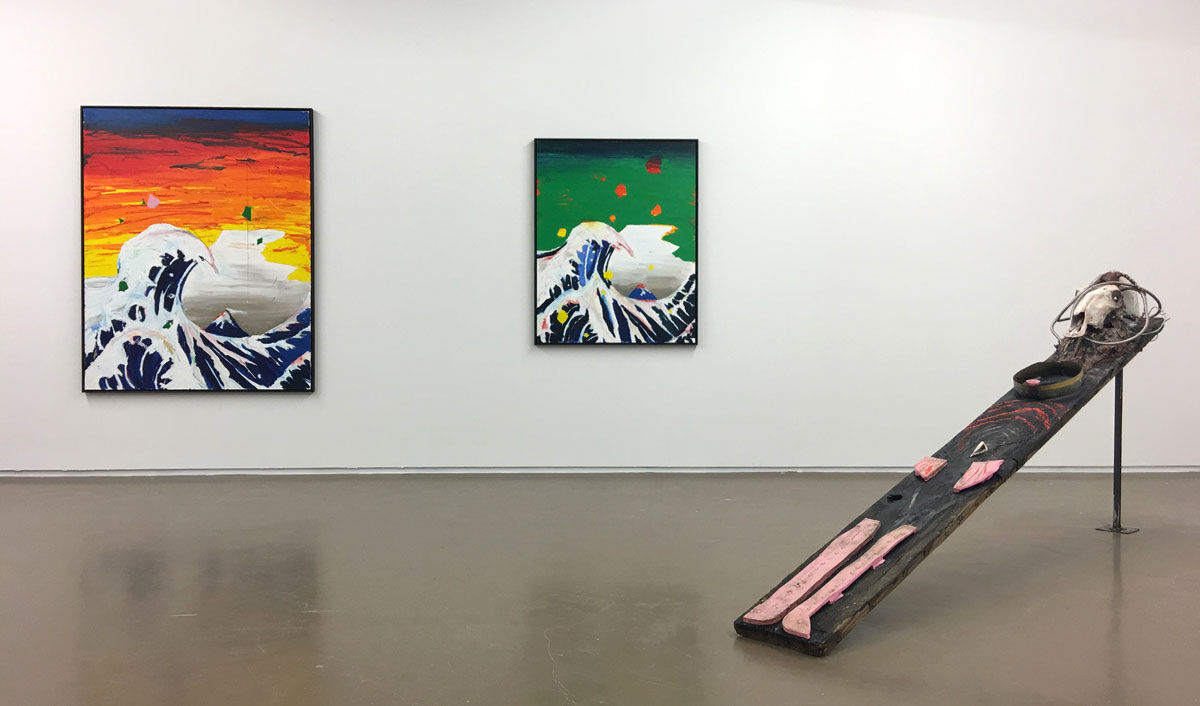 Installation view of works by Harold Ancart and Huma Bhabha at CLEARING’s booth at Independent Brussels, 2016. Photo courtesy of CLEARING.

The Brussels edition sees over 60 galleries and nonprofits spread across six floors of the city’s Vanderborght building. The 1930s former department store is something of a happy medium between the DIY vibe of Independent’s first location (four floors spanning Chelsea’s scrappy former Dia building) and the sleek lines of its new, light-flooded TriBeCa locale, Spring Studios. “This is among the top editions of Independent that I’ve seen,” said Belgian collector Frédéric de Goldschmidt after an initial perusal of the halls. (He opened an exhibition pulling from his holdings, titled “not really really,” the night before.) “The selection of galleries is amazing, from the more established like David Zwirner to more local, and with prices from Zwirner’s
Sandback
in the six figures to a book at a local Belgian publisher, Triangle Books, for €20 or €50,” the fair offers a wide appeal that will be key to its integration into this new city.
Independent’s Brussels edition follows the opening of Independent Régence, a year-round exhibition space in the city launched in September 2015. For its founders Elizabeth Dee and Darren Flook, the expansion to Europe was simply a logical extension of the network of galleries they had fostered with the fair’s New York editions. “It had been on their minds for a while,” said Independent Brussels co-director Liv Vaisberg on opening day, noting that at least half of the fair’s rotating network of 120 galleries hail from Europe. “Brussels is the right place pragmatically. It’s very near Paris, Cologne, Amsterdam, and London. It’s a city that’s really booming in terms of art, with a strong collector base, good institutions, and artist studios, and rents are cheap.”
For many, the fair harkens back to the energy of Independent’s first year in New York. “It’s the Dia building breathing new life,” mused the Brussels collector Alain Servais. And like those early editions, Independent Brussels is free of charge. “It was important for us to go back to our roots and make the fair free and open to the public,” said Vaisberg’s counterpart, Independent Brussels co-director Olivier Pesret. “We put so much effort into curating this show that we want as many as people as possible to see it.” Advertisement
Taking a mid-opening reprieve on a fourth-floor bench, Servais added, “It’s very exciting. I’m honored in the name of Brussels.” The collector was was impressed with Independent’s decided lack of painting (“Galleries are taking more risks; it’s easier to sell paintings”) and the notable effort to integrate the new initiative into the city’s thriving but sometimes overlooked grassroots art community. Beyond Brussels’s dozens of international galleries and notable institutions like WIELS and Bozar, its key draw, according to Servais, is its strong community of artists and independent exhibition spaces. “It’s something you don’t see as a two-, three-, or four-day visitor. But we still need anchor events like [Independent and Art Brussels] to bring people around. It’s a good symbiosis.”
For less globetrotting Belgians than Servais, Independent offers an alternative to their expectations of major art market events. “Not all Belgians have been to New York to see Independent, so it’s a discovery to see this alternative model of an art fair,” said Louis-Philippe Van Eeckhoutte, director of Brussels gallery Office Baroque, which is participating in an edition of the fair for the fifth time. “It feels much more like a curated exhibition than a commercial event,” he added of Independent’s signature lack of structured aisles and booths. Office Baroque tapped artist
Jan De Cock
for their presentation, who curated a 19th-century salon-style wunderkammer filled with artists from the gallery—
Catharine Ahearn
,
Tyson Reeder
, and
Leigh Ledare
among them. (Works are priced between $4,000 and 35,000.) The highlight of the booth, a piece by New York-based artist
Matthew Brannon
, captures a person’s portrait through a graphic painting of their favored reading material and the music they listen to (think Artforum and a classic Grace Jones vinyl album). The wunderkammer has been a hit with collectors, with a number of sales rolling in in the first hours, according to Van Eeckhoutte. 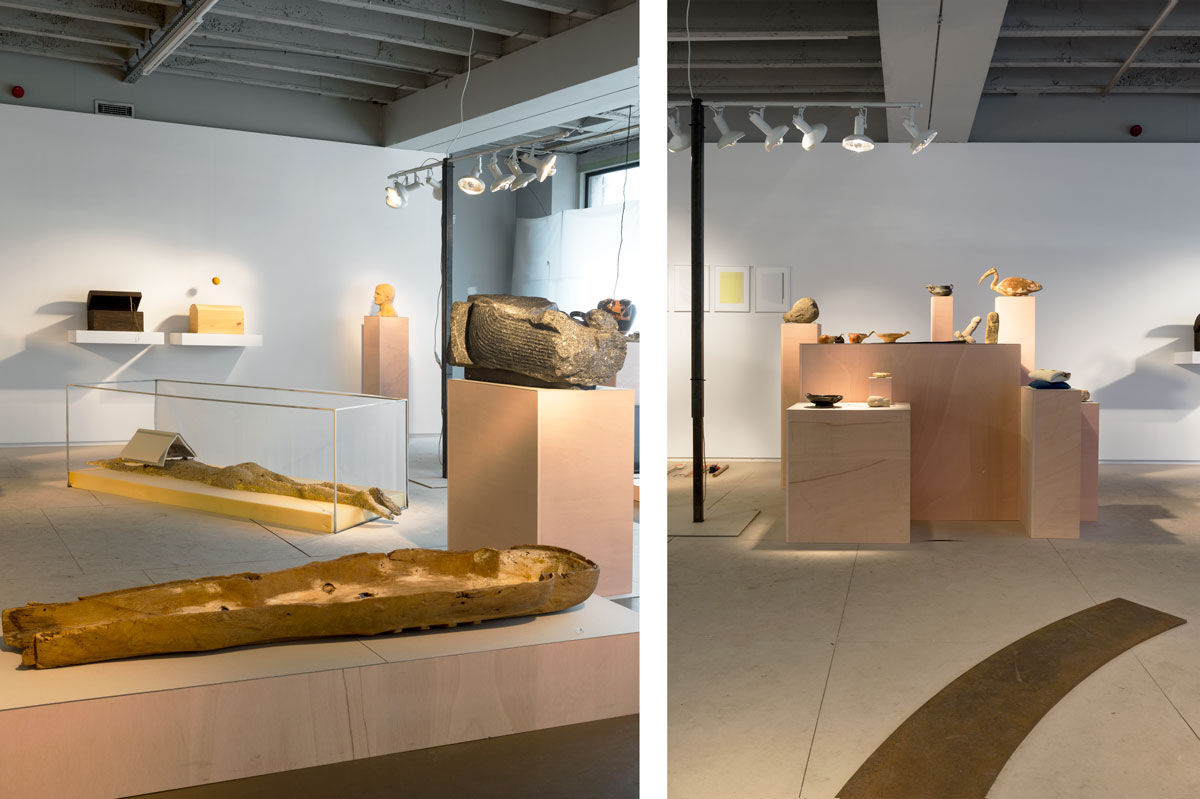 Around the corner, French artist
Guillaume Leblon
combined archaeological objects and ancient art with contemporary art for a joint booth with Cahn International and Galerie Jocelyn Wolff. (It’s a favorite of both Servais and de Goldschmidt.) “Antique art is much more about objects with a function like a spoon or a vase and made by a craftsman or unknown artist,” said Jocelyn Wolff director Sandrine Djerouet, “whereas with contemporary art we know the artist, and the works are made for their aesthetic purpose.” Here, the two approaches intermingle: Picture Greek, Roman, and Egyptian sculptures amongst works by artists such as
Katinka Bock
,
Zbyněk Baladrán
, and
Franz Erhard Walther
. The standout of the booth is Leblon’s Nageuse au repos (2013, €35,000 including tax), a classical form depicting a woman’s body sculpted in wax and sand, displayed on a foam-and-plastic pedestal, itself a nod to
Giacometti
’s iconic cage sculptures. Nearby, an ancient Egyptian sarcophagus from circa 664–525 BC is priced at €38,000, excluding tax.
One flight up, Gavin Brown’s enterprise presents a solo booth of new paintings by
John Seal
, following the Los Angeles-based artist’s exhibition at the New York gallery in September. The paintings (priced at $21,000 apiece) are situated within mahogany cutouts in the shape of a banana, a pineapple, and a rotary dial phone, taking kitsch and Sunday painting and raising them to high art. “He’s not really known here,” said the dealer of his choice to show Seal in Brussels. Brown noted sales have been intermittent, but overall, “the fair is going okay. It’s slower, but I think it’s a particular situation given that it’s Europe, it’s in Brussels, right now.” This, of course, a nod to the recent terrorist attacks at the Brussels airport and Maelbeek metro station that killed 32 people and injured hundreds more. 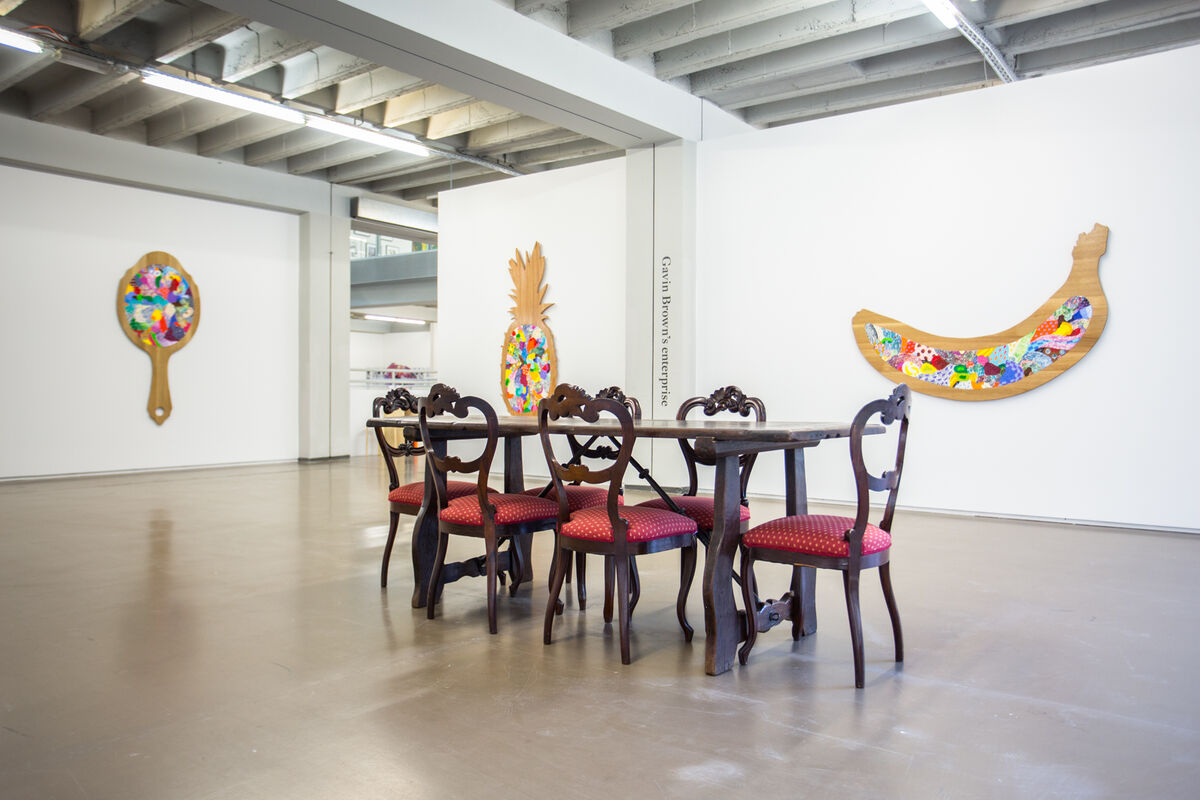 Brussels and New York’s CLEARING gallery, participating in Independent for the third time, presents new totemic sculptures by
Huma Bhabha
amongst paintings by
Harold Ancart
. (The two happen to be friends, notes gallery founder and director Olivier Babin.) Two hours into the fair, nearly all of Ancart’s seven paintings, depicting imagery pulled from Hokusai’s Great Wave, had been sold on the range from $18,000–40,000. The Bhabhas, priced from $175,000 to 250,000, were also selling well, according to the gallerist. “It’s a good fit for us,” Babin said of Independent, sharing his excitement for this year’s edition. He added that Brussels’s avid collector base for conceptual art provided a strong rationale for opening a gallery in the city in 2012—and for participating in Independent Brussels. “It’s a very modern service society with a lot of cash and a tradition of collecting.”
Following March’s edition of Independent New York, where VI, VII participated in the fair’s inaugural Independent Firsts sector for first-time exhibitors, the up-and-coming Oslo gallery is showing work by British artist
Eloise Hawser
and Norwegian artist
Mikael Brkic
. “There’s a very strong sense of camaraderie,” said gallery founder Esperanza Rosales of the fair, a tone she says is set by Independent’s organizers. “Everyone at the fair feels responsible for how it goes for everyone else. That’s important when you do a fair for the first time.” According to Rosales, their second Independent is off to a solid start. Two pieces from a series of glass works by Hawser, which see elements like backpack straps, tin cans, and photo filters baked into panes of glass, sold to private European collections for €13,000 in the first hour. 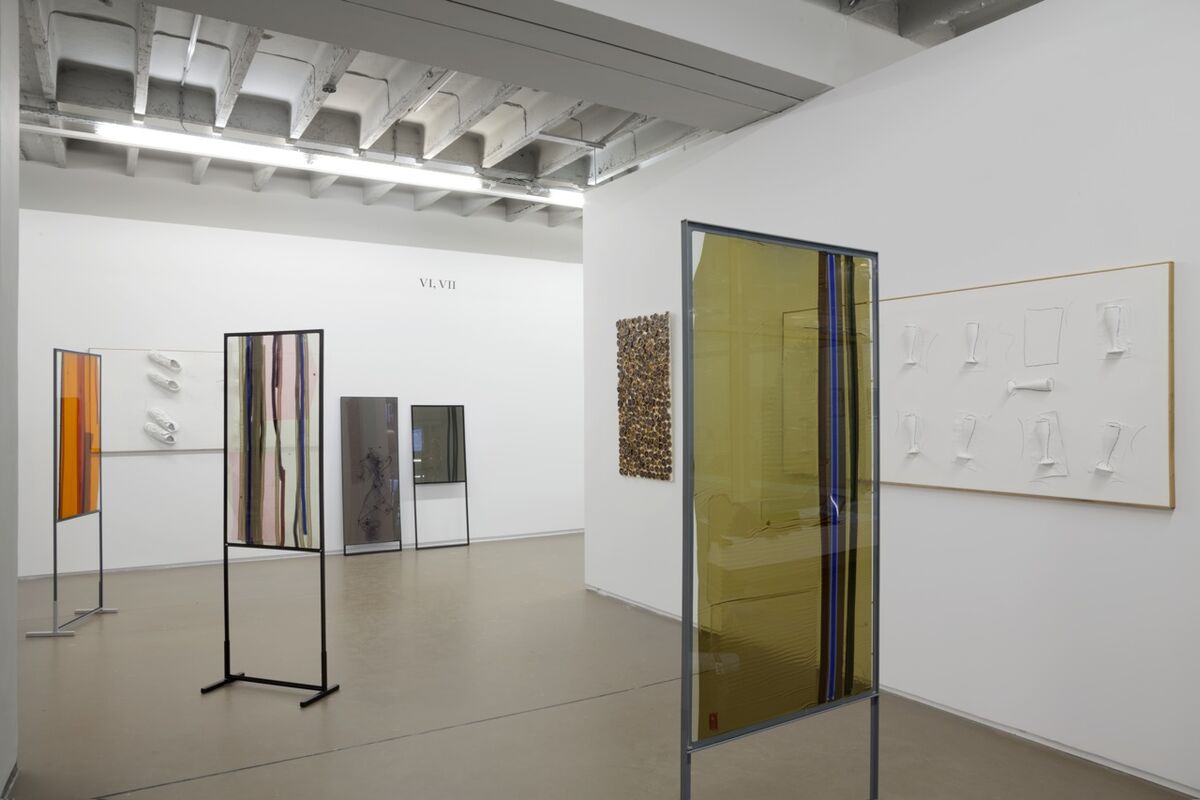 What strikes while perusing this latest addition to the Independent portfolio is the level of quality that the fair has managed to maintain. While Independent has grown in global reach and, with Régence, expanded its purview to include exhibitions outside of the five-day art fair rhythm, it has also stayed true to its original intent: producing a fair, foremost, for its galleries and their artists. Independent is definitely a major art market player these days, and one of a scale that punches far above its weight.
—Molly Gottschalk
Related Stories

What Sold at Independent’s Opening Day 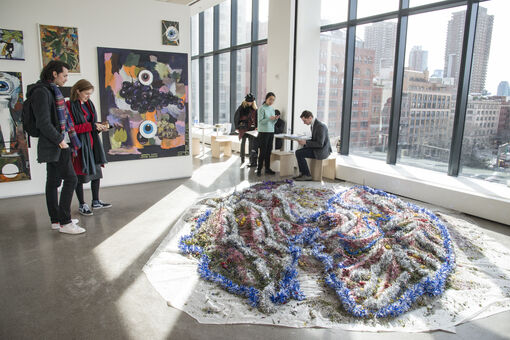