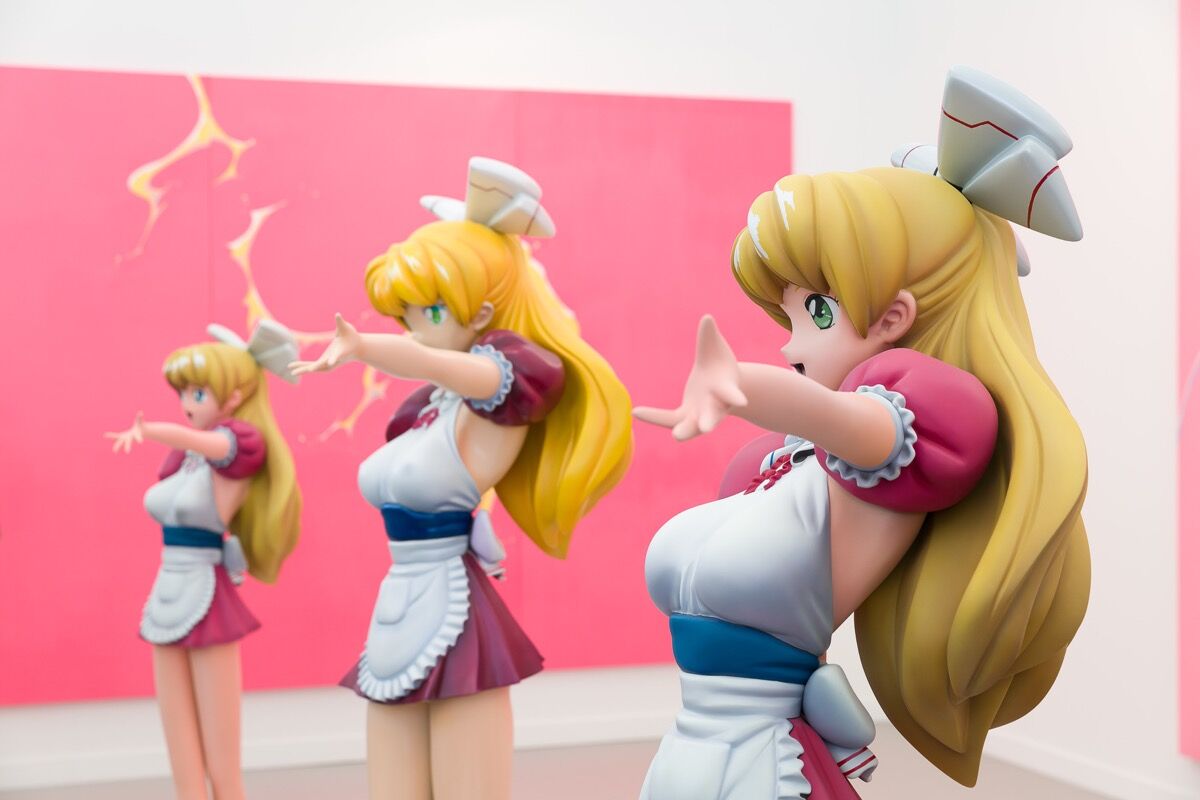 Installation view of Takishi Murakami’s work in “For Your Infotainment” at Frieze New York, 2018. Photo by Mark Blower. Courtesy of Mark Blower/Frieze.

Hudson, the late dealer who built Feature Inc. into one of America’s most influential small galleries over its 30-year run, was not your typical exhibitor at art fairs. After boycotting them for decades, he dabbled in a few, such as NADA and Independent Art Fair. When Feature Inc. was invited to show in the Outsider Art Fair in 2013, Hudson brought something especially outsider: Tantric paintings by anonymous residents of Rajasthan, India, which fair founder Andrew Edlin called “unlike anything the fair had seen in its 20-year history.” Another time, he came to a fair and sold pot brownies out of his booth.
Now Hudson, who died in 2014 (the same year his gallery closed), is back at an art fair one last time. For Frieze New York—which opened on Wednesday to VIPs—Matthew Higgs, director of the New York-based art nonprofit White Columns, organized “For Your Infotainment,” eight booths showing artists championed by Hudson and Feature Inc. when no other gallery would. There’s
Takashi Murakami
,
Tom Friedman
,
Raymond Pettibon
, and
Tom of Finland
, whose homoerotic sex scenes featuring very buff, well-endowed men were perhaps too politically risky when Hudson first started showing them at Feature Inc. in 1988.
“Wherever his interests seemed to lie, they invariably seemed to be out of sync,” Higgs said Wednesday at the fair. “It’s taken fully 25 years for Tom of Finland’s work to be acceptable even in today’s contemporary art world landscape. And think about when [Hudson] showed Murakami in New York for the first time in the mid-’90s—my feeling is no one else would have shown that work, and 25 years later, that seems crazy.”
Higgs has a long history with Hudson. He said that he obsessed over the latter’s program from afar while living in London in the late 1980s, reading everything he could about Feature Inc. When Higgs moved from London to New York in the early ’90s, he was a frequent visitor to the gallery, which, by then, was in SoHo. In 1988, Hudson had moved Feature Inc. to New York from Chicago, where he opened the gallery on April Fools’ Day in 1984 with the first-ever show of
Richard Prince
’s influential joke works. Despite his passion for the program, Higgs said Hudson was even a little ahead of Higgs’s own sensibilities. 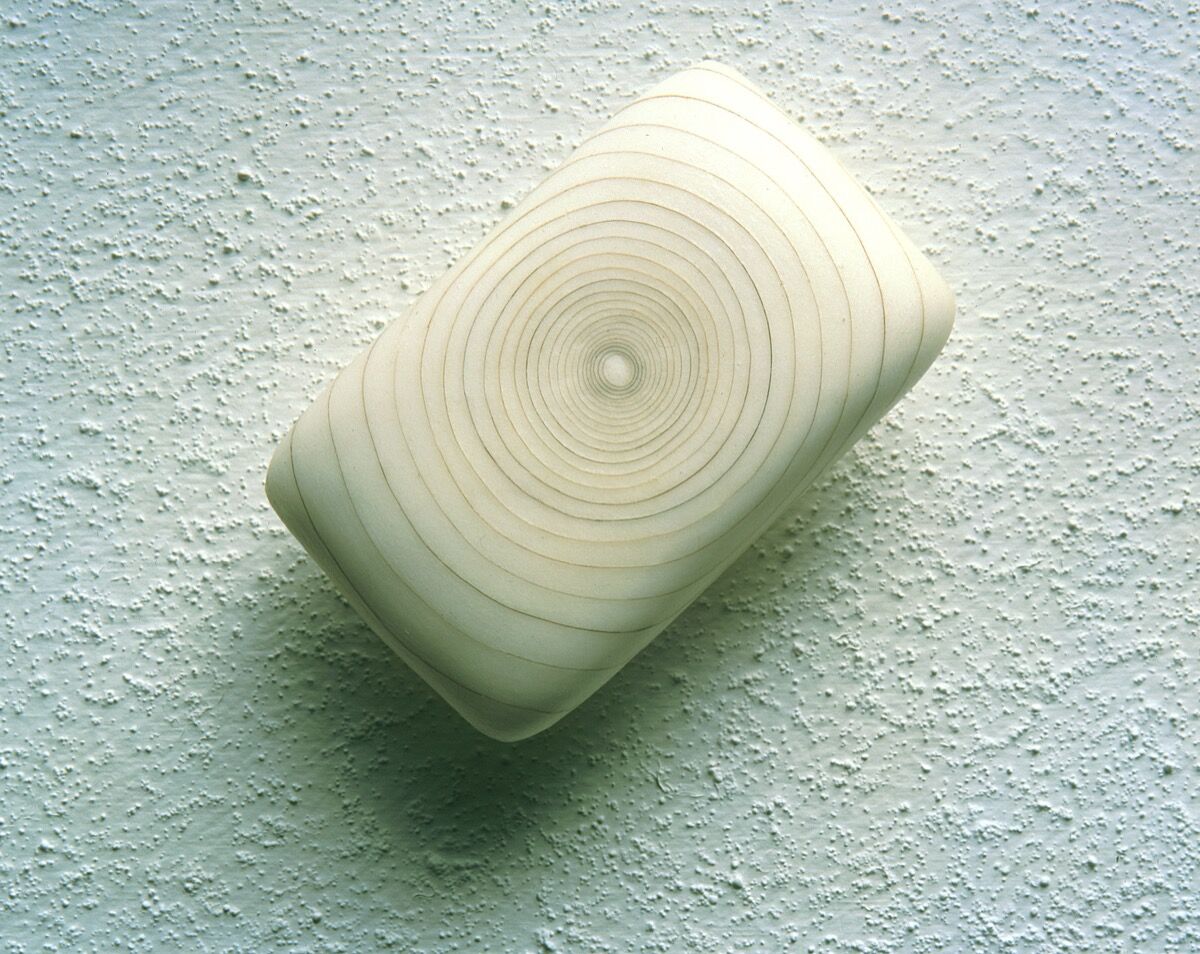 “When I went to the gallery, invariably, I never got it—and then 3, 5, 10, or 15 years later, it just came into focus,” Higgs said.
At first glance, “For Your Infotainment” looks like an aisle of booths at an art fair. The same major galleries are here showing (and selling) the artists that Hudson once struggled to find an audience for. David Zwirner is showing Pettibon, Gagosian is showing Murakami, and David Kordansky Gallery sold a number of works by Tom of Finland, with prices ranging from $10,000 to $25,000.
A cynic might say this illustrates how small, risk-taking galleries build up their artists over the years just to see them get poached by larger galleries that already represent many profitable artists—an unintentionally ironic comment at a time when small galleries are struggling, and mega-dealers have called for subsidizing their less-flush colleagues’ art fair costs. In his own lifetime, Hudson had to deal with Gagosian nabbing Friedman, and
B. Wurtz
began working with Metro Pictures. But Higgs insisted it was fitting to honor a dealer who didn’t care much for the art market here at a fair, even if these artists are only now famous because Hudson did the tireless—and often profitless—legwork to build up their careers.
“What it comes back to is: Hudson was right, and the decisions that he made 25 or 30 years ago that seemed like total curveballs were fundamentally correct,” Higgs said. “I think he understood the value of the work at its earliest stage, and I think he understood that there is a much larger audience for it.”
Case in point: Stephen Friedman Gallery’s booth, which was showing works by Tom Friedman, had a well-known untitled piece from 1990: a bar of soap inlaid with the artist’s pubic hair.
“I think this originally sold for, like, $700,” Higgs said of the work.
By 2001, it sold for for $58,750 at Christie’s New York. 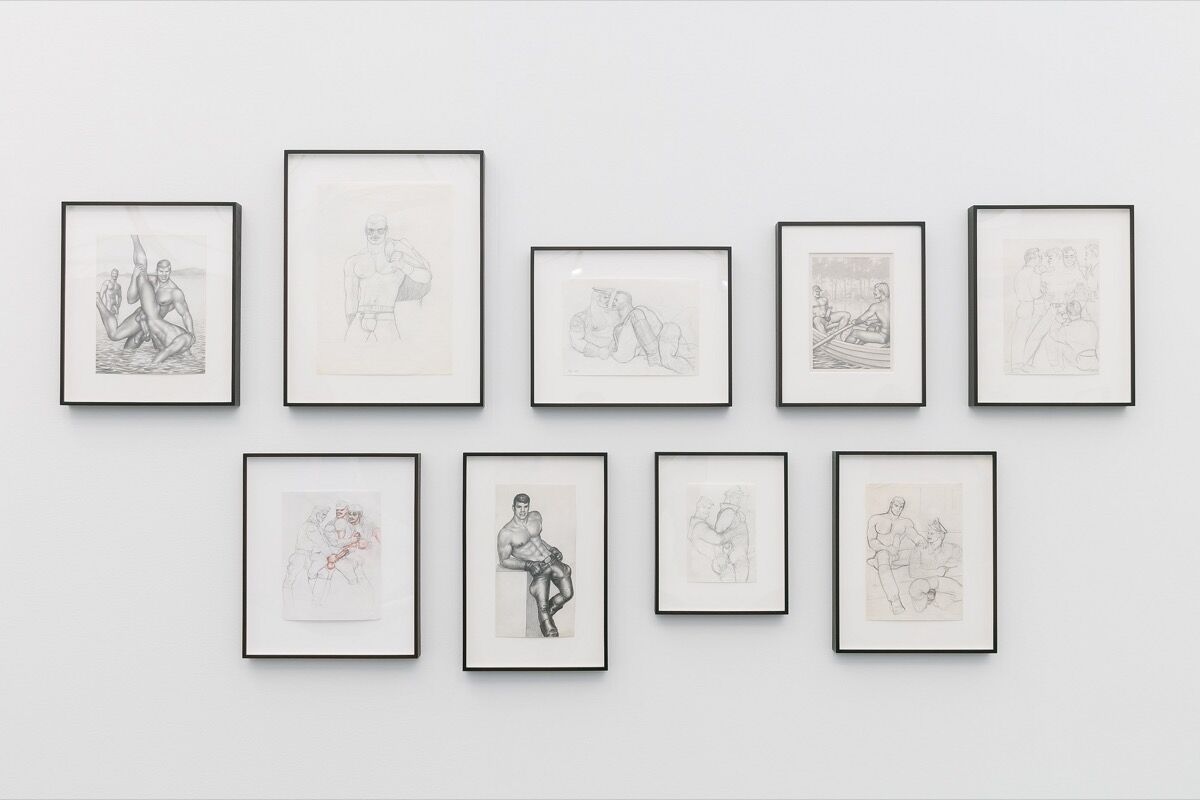 Advertisement
The gallery wouldn’t comment on the asking price for the bar of soap, but a number of other sales early on in the fair confirmed Hudson’s instincts were spot-on. David Kordansky sold two graphite-on-paper works by Tom of Finland for $25,000 each, and Nicelle Beauchene sold several paintings by
Andrew Masullo
. Pettibon’s drawings at the Zwirner booth were old enough that Hudson could have shown them in his own gallery when he first discovered the artist, and they sold for prices exponentially higher—some of them were priced as high as $250,000, the gallery said.
When Pettibon was first included in shows at Feature Inc., not only did Hudson have difficulty selling his work, but some thought the drawings didn’t belong in a gallery at all, Higgs said.
“You have to remember, when Hudson showed the work, there were no monographs on Raymond Pettibon—there were the stapled zines that Raymond made by himself and distributed by himself,” Higgs said. “And Hudson understood that to move this out of the West Coast subculture of punk, into another context—his context—it could start to reverberate and find new conversations.”
Last year, the Feature Hudson Foundation was established to maintain the gallery’s expansive archives. The foundation had a booth in the section, with works by B. Wurtz,
Richard Kern
, and
Nancy Shaver
. Above them was a gigantic print of a picture of Hudson—lying upside down, bald and clean-shaven, with a serene face and clear eyes staring right at the camera—installed on the entire back wall, his visage looming over the proceedings like the dealer loomed over the gallery in his lifetime.
“It was important there was a physical, literal, manifestation of Hudson here,” Higgs said. “Hudson was always behind the front desk—when you go to Gagosian, you don’t see Larry behind the desk, when you go to Zwirner, you don’t see David behind the desk. But at Feature, Hudson was always there.”
Nate Freeman
Related Stories