Inside Hunt Slonem’s Studio, a Peaceful Kingdom of Animals and Art 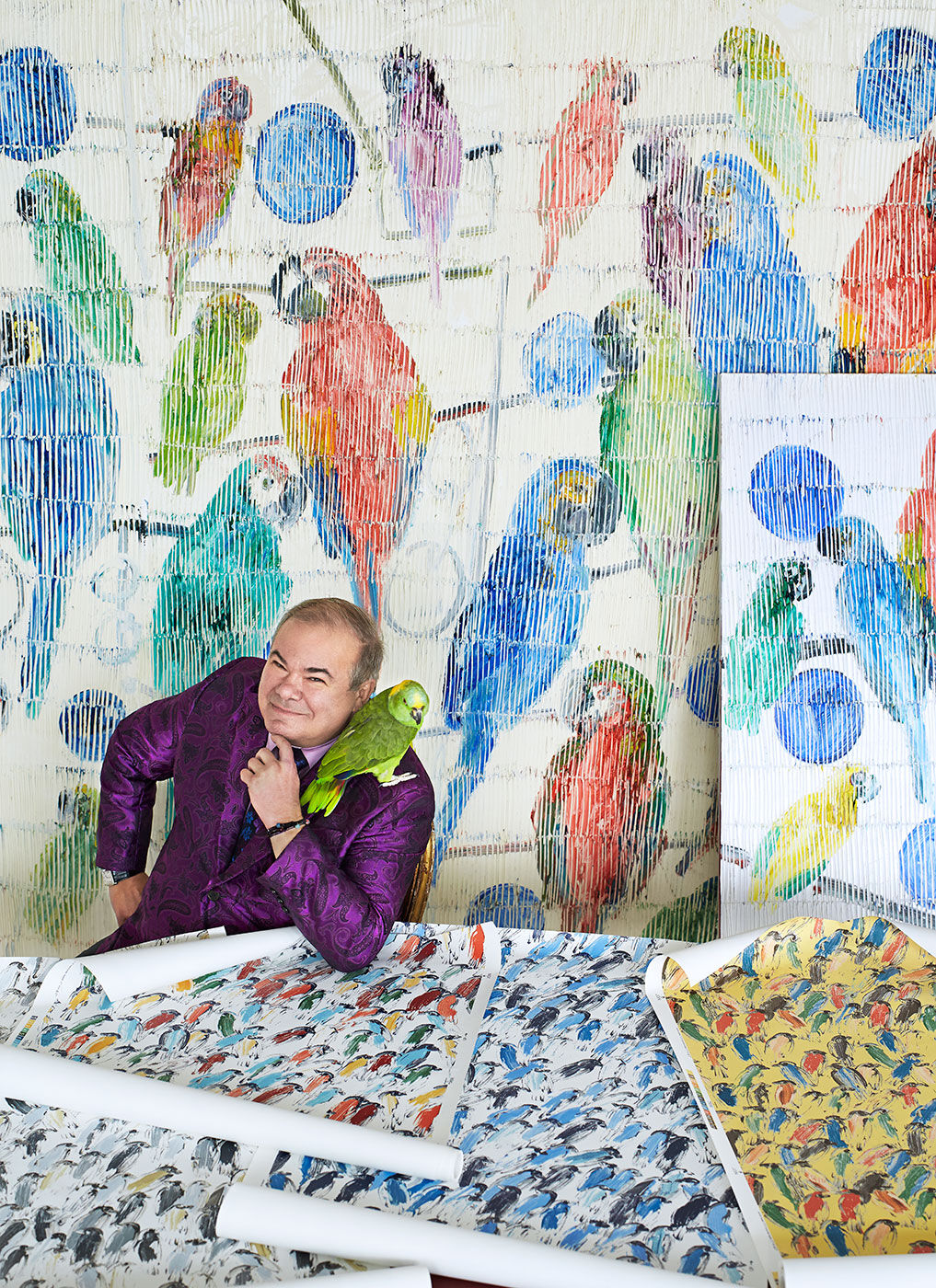 Photo courtesy of the artist.

Some years ago, the artist
Hunt Slonem
, who has a habit of consulting mediums, connected with the spirit of Abraham Lincoln. During their conversation, the former U.S. president and hero of emancipation suggested that Slonem paint doves. So he did, and he’s continued ever since.
Birds are Slonem’s most frequent subject and greatest muse. He’s painted thousands of all species, colors, and sizes—from rainbow bayou finches to toucans and peacocks. And the bright, bursting canvases that they inhabit have decorated walls from the Moscow Museum of Modern Art, to the felled World Trade Center, to Washington D.C.’s Ford’s Theatre, where Lincoln was assassinated. They’re also the subject of a new monograph, titled Birds, that gathers together over 180 of Slonem’s paintings of feathered beings in one sumptuous tome—and they adorn almost every surface of the artist’s cavernous, 35,000-square-foot Brooklyn studio.
“It’s the color that attracts me to them,” the 65-year-old Slonem coos, as we walk down the long corridor of his studio-cum-showroom. “Pure color.” We pass walls painted in brilliant saffron yellow, jade green, and azure blue, and overlaid with Slonem’s canvases. They are offset by the artist’s vast collection of antique furniture. “Very rare, 1851, New Orleans,” he annotates a tall wooden chair resembling a seat that Cersei Lannister of Game of Thrones might have perched on in her heyday. 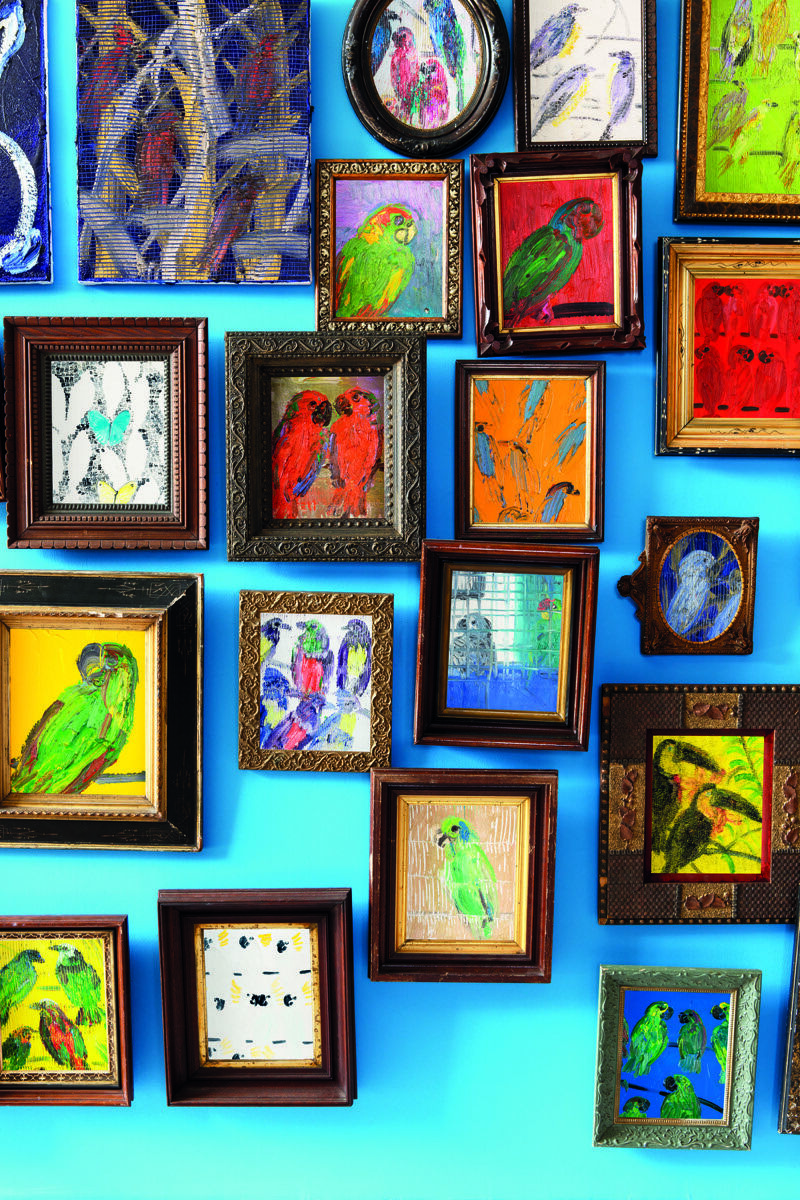 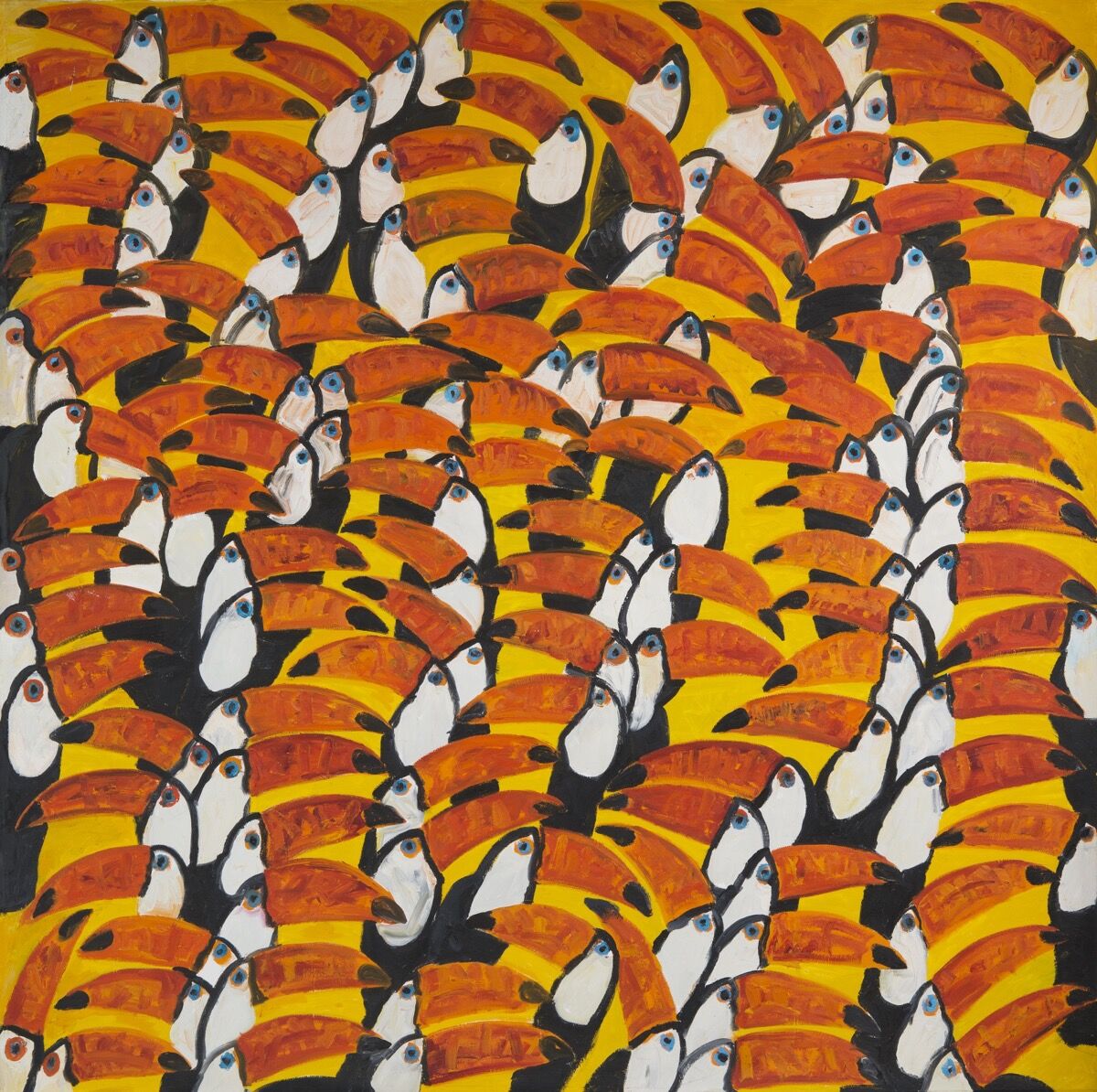 It’s an intoxicating, maximalist environment that matches its maker’s deep drawl, big smile, and kaleidoscopically patterned button-down. And it’s only enhanced by an idiosyncratic soundtrack that wafts over the space: a mix of Billie Holiday, Slonem’s “Ave Maria” ringtone (which buzzes off the hook), and a chorus of chaotic squawking.
Slonem pauses as we approach a towering accumulation of cages, housing some 60 rescue birds, and rethinks the reason behind his obsession with the preening, winged creatures. “Well, it’s their intelligence and sense of independence, too,” he explains, as he strokes Neruda, a white umbrella cockatoo. “They’re not from this dimension. In so many religions, they’re messengers to the gods.”
Slonem’s encounter with Lincoln in the late 2000s marked his first time painting doves, but not painting birds. He’s been drawn to them for as long as he can remember; the first time he took a pet parakeet and rendered its likeness on paper was around age eight, when his family was stationed in Hawaii for his father’s navy job.
Knowing Slonem as he is now—a man who can’t live without a profusion of paint, pattern, music, flora and fauna, and eccentric friends surrounding him—it’s hard to imagine the artist as an Army brat. “I grew up in a world of polaris missiles and submarines and ship launchings,” he remembers, as we head past his birds and tanks of turtles into a white room chock-full of easels and paint—the studio’s inner sanctum. “But my grandfather painted and sent his work. So that’s what I clung to as a child.” 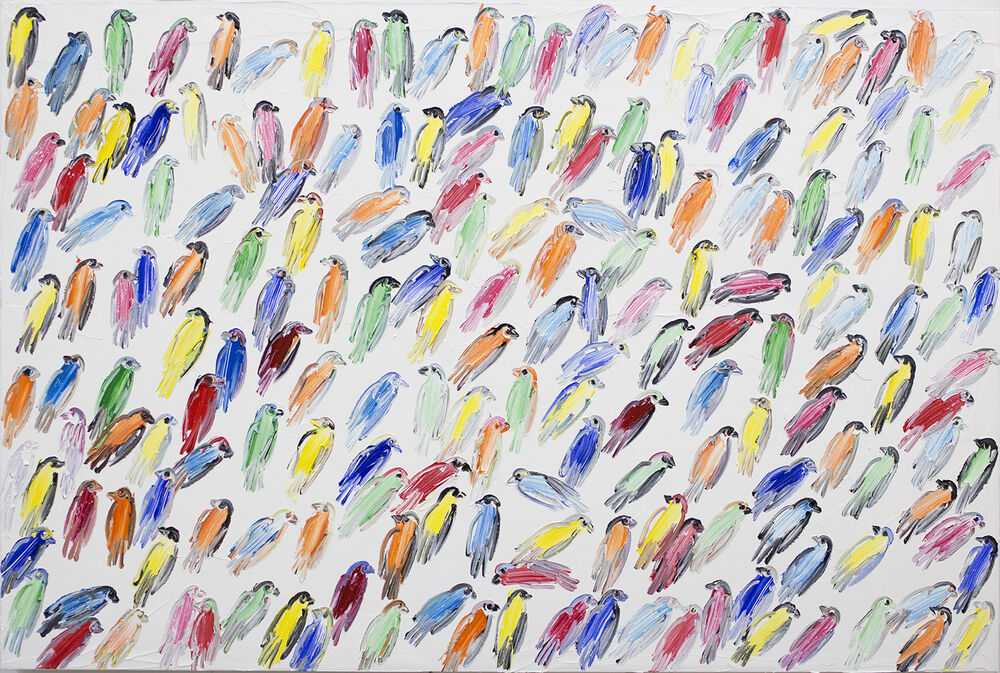 Hunt Slonem
Untitled CHL1320, 2014
Madison Gallery
Advertisement
After moving many times during his youth (his family also lived in Maine and Virginia, among other places), Slonem landed at Skowhegan for art school, where the scene was then “hip and figurative,” as he recalls. His teachers included
Alice Neel
and
Alex Katz
, who helped forge a new era of figuration during the 1950s and ’60s.
But Slonem wasn’t interested in painting people. He stuck to animals, and by the mid-1970s was installed in a big loft on Houston Street in downtown Manhattan, filled with pet birds and free-wheeling friends (including
Andy Warhol
and his circle). There, he rendered the exotic creatures he remembered from stints in Hawaii, Mexico, and Nicaragua—the antithesis of what he saw on the streets of New York—and brought his exuberant, colorful images into the city’s most domineering buildings.
Winning a bid to create a mural in the World Trade Center, in 1976, was arguably Slonem’s breakout moment. He masked two long walls of the 43rd floor of Tower One with a menagerie of animals in motion. The centerpiece was a green parrot, in flight and at full wingspan, its beak rendered in such a way as to look like it was smiling. When the towers were first bombed in 1993, the mural was mostly spared and Slonem was able to spruce it back up. But after the attacks of September 11, 2001, it was lost for good. Only two photos of the piece remain. 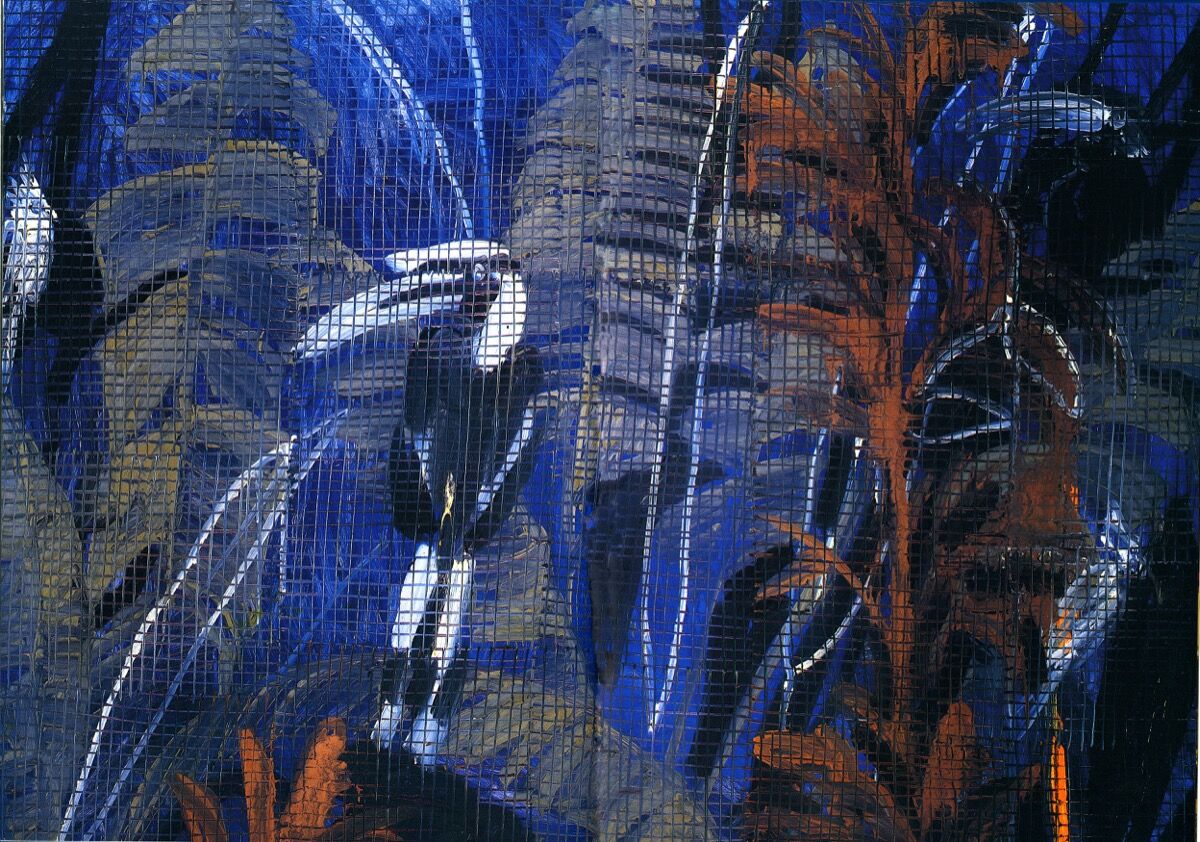 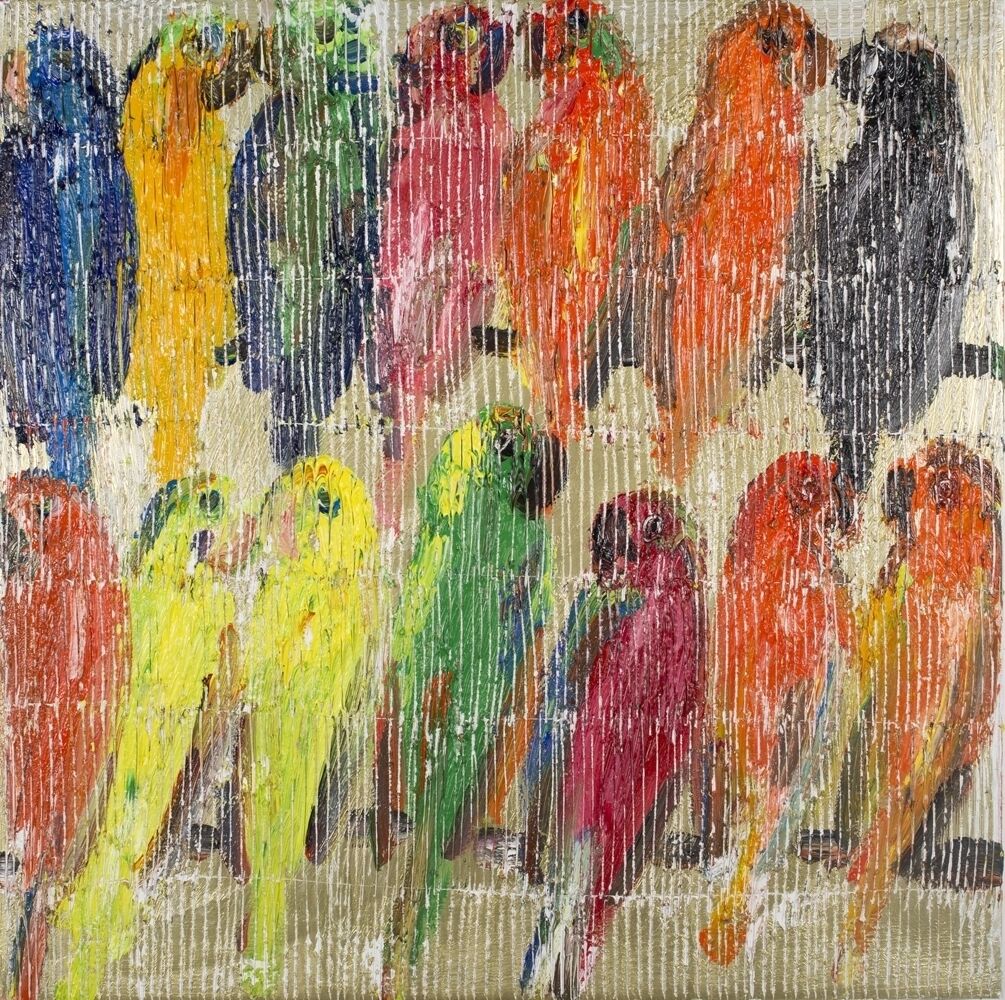 Hunt Slonem
Lories (CHL2023), 2014
Galerie de Bellefeuille
Slonem doesn’t like talking about politics, but he does concede that people around the world have read his paintings of birds (and also bunnies and butterflies) as symbols of freedom. Knowing this, the demise of his World Trade Center mural, titled Fan Dancing with the Birds (1976), is all the more poignant.
Since he painted Fan Dancing, Slonem’s style has changed. It’s less flat and more impastoed and expressive. More recent paintings of birds focus on a single breed per canvas. In one three-panel painting, Red Lories 2 (2013), the artist depicted some 800 parrots of all colors gathered together. They are huddled serenely, but look as though they could rise into the sky at any moment. The effect is joyous and buoyant.
As we walk back through the long studio, we pass a painting of doves. It resembles the first canvases Slonem made after connecting with Lincoln. Some of them, showing groups of white birds, bear titles like Peace Plan and Olive Branch. Our conversation turns to a solo exhibition Slonem had in 2015 at the Moscow Museum of Modern Art. I ask him how the Russian community responded. “So many people came to me to say how uplifting the paintings were, especially in that particular moment,” he says, alluding to the Putin administration’s clampdown on freedom of expression.
“I guess my paintings reference another kind of reality,” he ponders, as the bird song around us crescendos. Indeed the environment created by his works feels both primordial and tranquil. And, these days, that’s a welcome salve for eyes bombarded by images of conflict and inequality. “The Peaceable Kingdom, that’s my world,” he laughs, making reference to an Eden where all animals and humans live in harmony.
—Alexxa Gotthardt
Related Stories