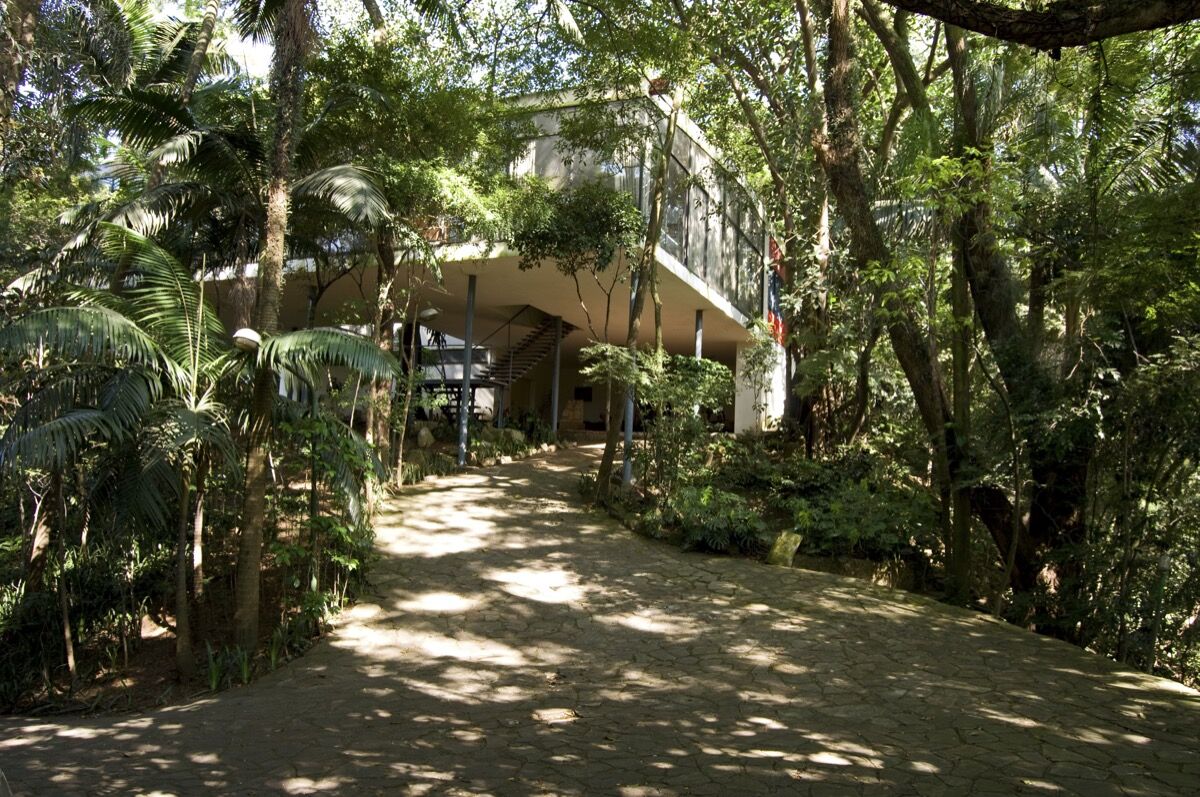 In the lush São Paulo suburb of Morumbi, a rainforest inhabited by monkeys and toucans cradles an iconic, Modernist glass house:
Lina Bo Bardi
’s Casa de Vidro.
Built in 1951, the house is recognized as one of the Italian architect’s most notable works, and a pivotal contribution to the golden age of Brazilian Modernism. It was also Bo Bardi and her husband’s home for some four decades. Inspired by Brazilian culture, she sought to create a space that would enmesh domestic living with the natural world, to engender a visible and experiential harmony between man and nature.
Today, the house serves as the headquarters of the late architect’s foundation, but it’s also something of a time capsule, filled with the original art and design from its heyday. To visit is to become fully immersed in Bo Bardi’s exquisite taste and rational, innovative approach to design.
Upon arriving at Casa de Vidro—reached by navigating a series of winding roads by car, and a steep driveway encrusted with shards of colored tiles—the main volume of the house looms overhead, elevated from the earth on columns. A gleaming glass and concrete box, it reflects the surrounding trees and sunlight. 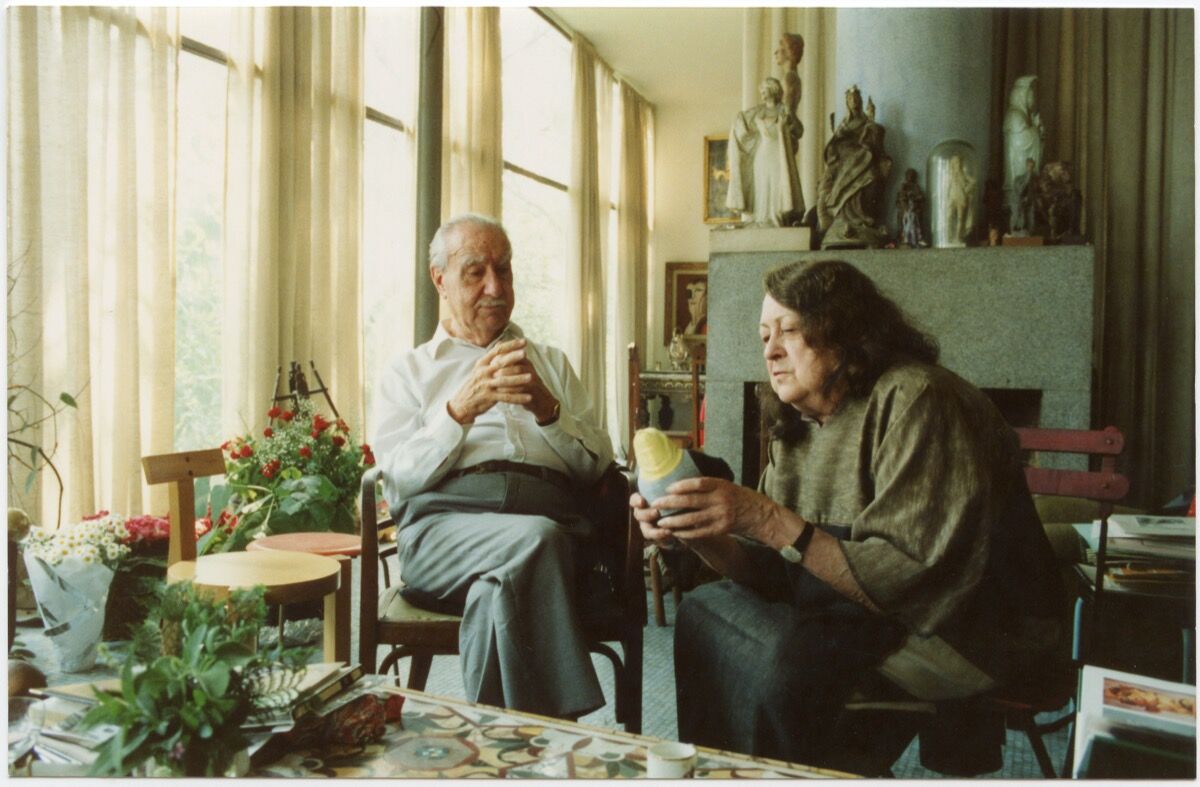 The house is emblematic of Bo Bardi’s style, which she began to hone during her formative years in Italy during World War II. After attending architecture school in her native Rome, she moved to Milan and worked alongside architects and designers like Carlo Pagani,
Gio Ponti
, and Bruno Zevi, among others. She became heavily involved in design publications due to the lack of design work in wartime Italy. The war and the resulting destruction across the country (her own studio was demolished) would have a strong impact on Bo Bardi. She became involved in the Italian Communist Party and conversations around reconstruction of the country, particularly dismayed by the general public’s lack of interest in the topic.
In 1946, Bo Bardi married art critic Pietro Maria Bardi, and during travels to South America that same year, they decided to settle in Brazil. While living in Rio de Janeiro, Pietro was invited to establish an art museum, what would become Museu de Arte de São Paulo (MASP), which led the couple to the city. (Later, Bo Bardi would design MASP’s second, current home.) Upon moving to São Paulo, they purchased a 7,000-square-meter parcel of land to build their future home, Casa de Vidro, Bo Bardi’s first work in Brazil.
Once the site of the Atlantic Forest, the land was uninhabited countryside at the time. “When they moved here, there was nothing,” says Lissa Carmona Tozzi, owner of ETEL, a major Brazilian dealer of Bo Bardi’s designs, from within the house. “All of this exuberant vegetation that you see, it was due to Lina; she planted everything.” Casa de Vidro was the neighborhood’s first residence—a far cry from the verdant, high-end residential neighborhood it is today. 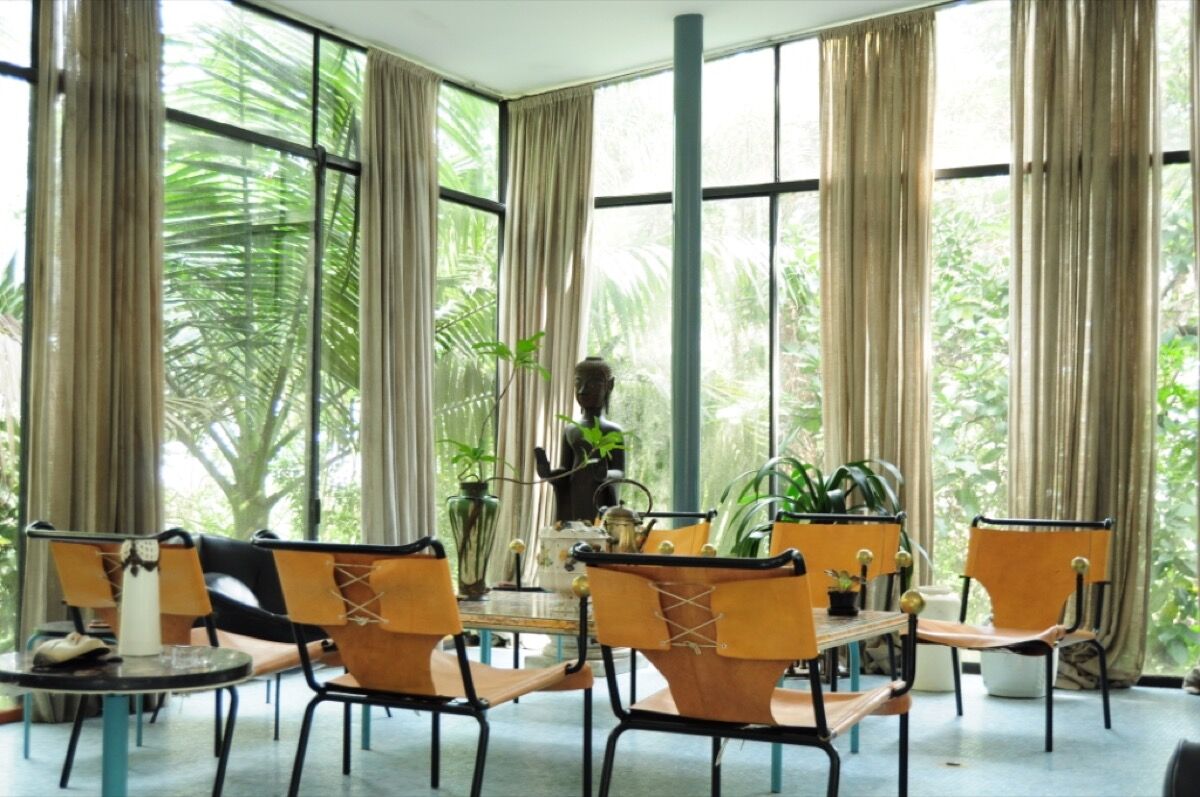 Advertisement
One enters Casa de Vidro from below, by climbing a twisting staircase of concrete slabs. The front door gives way to the main room, an open space where the couple would host the city’s artists, politicians, and intellectuals. The house was “a center of the intelligentsia,” says Carmona Tozzi.
In that first room, one begins to understand the impressive extent to which Bo Bardi designed everything—from the seamless way the windows slide open, to sleek black doorknobs shaped like small animal horns. Each object and fixture (even kitchen utensils) was the result of her decisions and creativity.
The entire house, Carmona Tozzi says, is exemplary of Bo Bardi’s inventive use of materials. “Everything was in vogue at the time, but she used it in a different way,” she says, gesturing to the pale blue stone tiles that cover the main room’s floor. In 1950s Brazil, this type of tile was commonly used on the facades of buildings, but to install them on the floor, as Bo Bardi did, was unprecedented. Another stark departure from the design of the times was the use of natural light and lamps in place of overhead lighting. “This was completely unimaginable at the time,” Carmona Tozzi adds.
The main space is almost entirely enclosed by windows, giving visitors the feeling of being inside an ultramodern treehouse. The effect is only strengthened by a glassed-in, interior courtyard where a large tree grows. Beyond this, a wall hung with paintings gives way to the kitchen and, to the right, a hallway that leads to a bedroom and two bathrooms.
Each of the rooms is populated by an eclectic mix of furniture and art—much of the wall space is occupied by the collection of Italian
Baroque
art that the couple brought over from Italy. The house commingles some of Bo Bardi’s most iconic furniture—like a set of four Bola chairs, marked by distinct corset-like laces that join soft leather at the back—though also includes works that were specially made for the space, like a chair with a pale blue frame that matches the floor tiles. 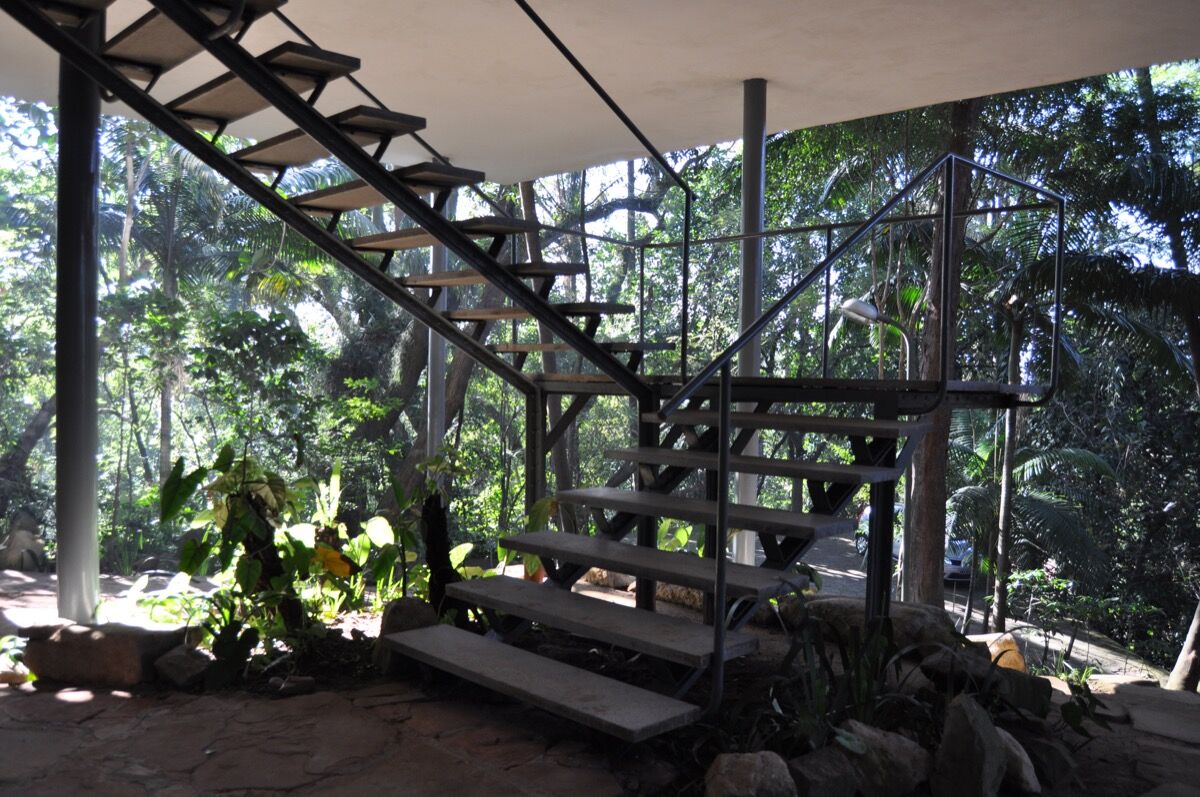 The varying group of chairs, tables, desks, and lamps trace the course of the designer’s career, growing ever more minimal over time. “Simplicity was one of her main characteristics and more than that, her goal,” says Carmona Tozzi. “With everything that you see, simplicity was the ultimate sophistication.”
This idea is embodied in full in two solitary bathrooms. Both are covered in tiny square tiles in shades of rich cobalt and pale grey, and adorned with simple ceramic facilities and metal fixtures. Though supremely elegant, the rooms feel somewhat ordinary today, only emphasizing how ahead of her time Bo Bardi was.
The ample-sized kitchen further serves to display the designer’s affinity for simple, utilitarian spaces, and evidences her own passion for cooking. The space is interwoven with a rich shade of emerald green, which appears on some walls and cabinets, and is a stark contrast to white tile, beige cabinets topped by silver steel countertops, and a rotund General Electric refrigerator. A door at the far end leads to a backyard that bleeds into the surrounding forest, with outdoor ovens and gardens where Bo Bardi would grow spices and herbs. The back facade, white stucco finished with emerald shutters, appears to be pulled from an entirely different home.
Carmona Tozzi stresses that even though the house was built during a flourishing moment for Brazilian design at the time, Casa de Vidro was unexpected. “She built this in the middle of nowhere, far from the city, using techniques and materials that were available at the time but using them in a completely different way. No one believed it,” she says. “It was really kind of a surprise.”
Casey Lesser is Artsy’s Lead Editor, Contemporary Art and Creativity.
Related Stories