Alexxa Gotthardt
Apr 17, 2018 4:18pm
For as long as humans have made art, they’ve experimented on a tiny scale. Ancient, very small depictions of animals have been discovered on the walls of Indonesian caves, and in 16th-century England, Elizabethans carried tiny, painted portraits of loved ones in their pockets—tokens meant for “private pleasure.”
Today, artists continue to explore the possibilities of the miniature. Many are attracted to the challenges and limitations of a process that requires extreme concentration, creativity, and patience. Others are drawn to the intimacy of the tiny paintings and sculptures that result, or the conceptual weight of depicting sprawling landscapes or heady subjects on diminutive surfaces.
A new book, Think Small: The Tiniest Art in the World, written by Eva Katz, chronicles the work of 24 contemporary artists who make art that can, for the most part, fit into the palm of your hand. Below, we shed light on eight of them, from a sculptor who creates mystical worlds within test tubes to a former muralist who now restricts herself to painting on lockets. 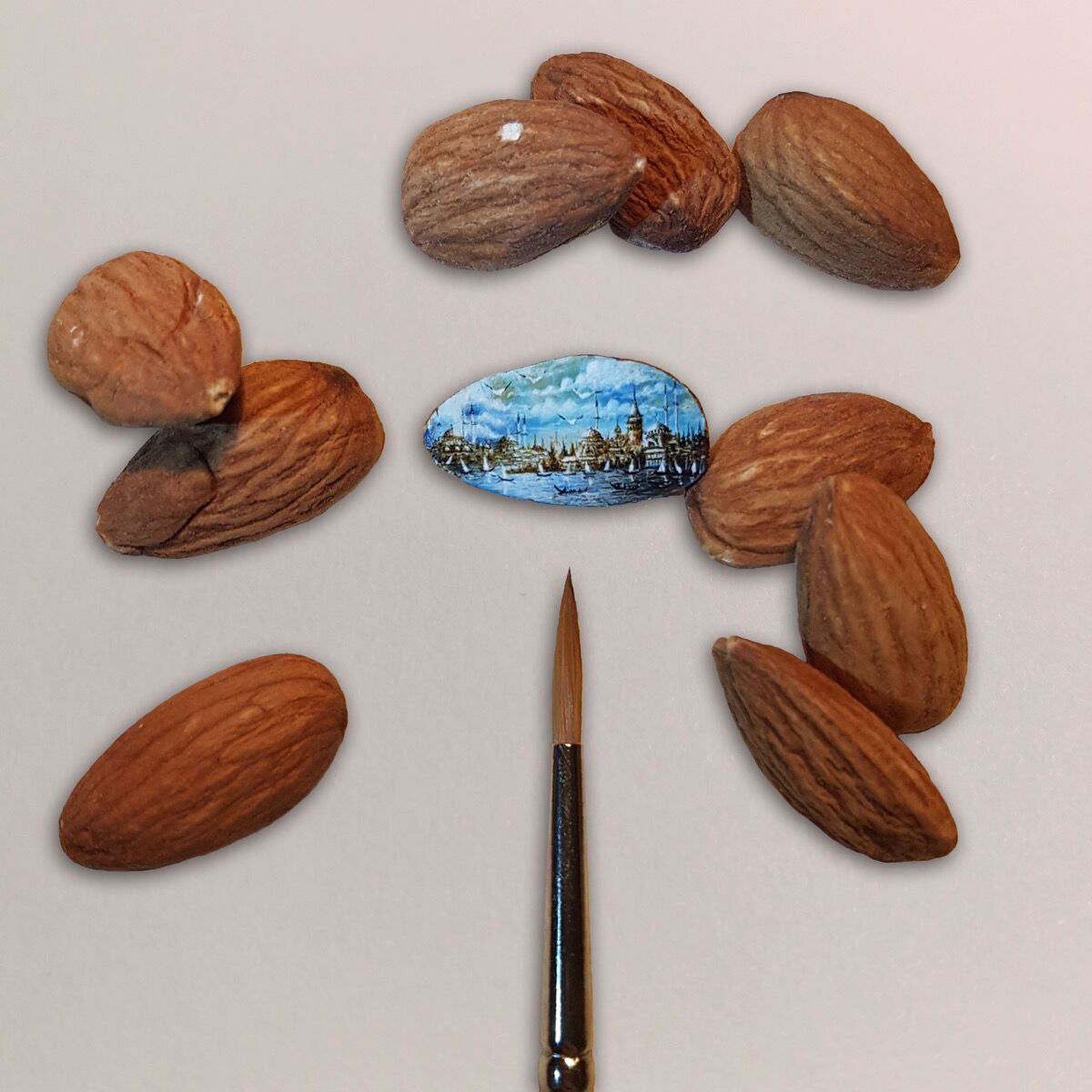 Work by Hasan Kale from Think Small: The Tiniest Art in the World by Eva Katz, published by Chronicle Books 2018.

Istanbul-based Hasan Kale has been known to paint on bottle caps, halved almonds, matchstick heads, and butterfly wings. “I love transforming micro objects that we ignore and pass over in our daily lives into art capsules,” he says in Think Small.
Over the course of his career, he’s worked on over 300 different bits and bobs. The shift from one object to the next isn’t easy, so Kale spends time getting to know his new substrates by observing them closely before he begins painting. Once he’s ready, he painstakingly fills the surfaces with scenes from his native Istanbul and portraits of well-known artists. Paintings take him anywhere from three days to three months, and the success of a work depends on an integral aspect of his process: how long he can hold his breath, so his canvas remains still while he’s laboring over it. 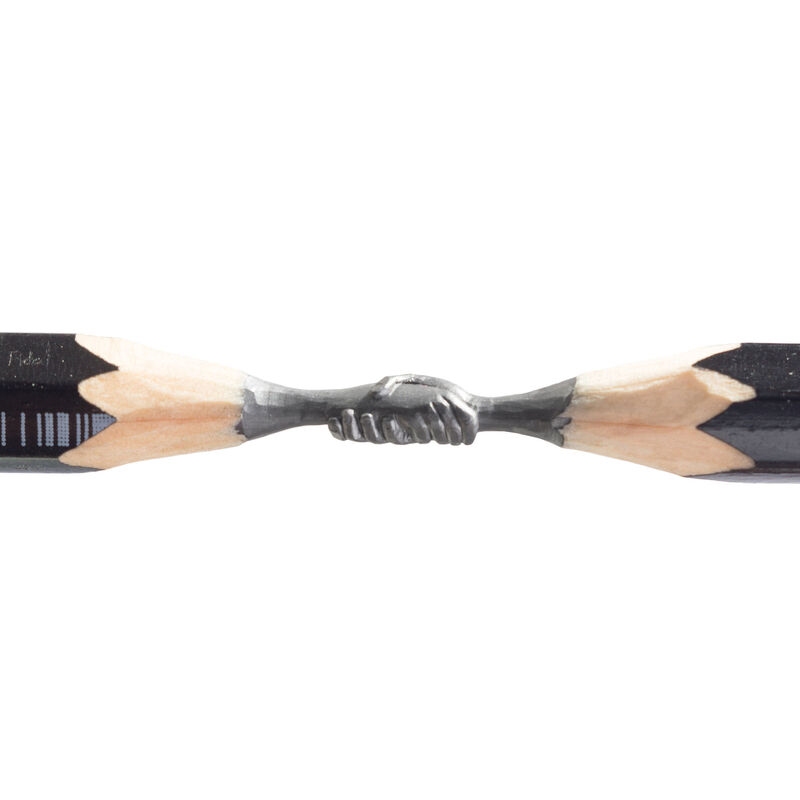 Advertisement
Salavat Fidai
started his career as a lawyer; he only turned to art after being laid off during Russia’s fiscal crisis in 2013. With time on his hands, he returned to his childhood pastime of carving. Raised by artist-parents, he remembers sculpting forms from bits of chalk as a young boy.
These days, Fidai is an Instagram sensation, thanks to the mesmerizing sculptures he carves from the tips of pencils. Using a craft knife and a 4x magnifying glass, he widdles hyper-detailed depictions of buildings, figures, and everyday objects into points of lead. They’ve included one particularly spectacular bird cage (complete with a parakeet) and his own, lilliputian rendition of one of
Jeff Koons
’s Balloon Dogs. A single work takes Fidai anywhere from 12 hours to several days. While he’s best known for his pencil sculptures, he admits that his favorite medium is “the humble pumpkin seed,” on whose several-centimeter-long surface he’s created very convincing copies of
Vincent van Gogh
’s Starry Night (1889) and
Johannes Vermeer
’s Girl with a Pearl Earring (c. 1665). 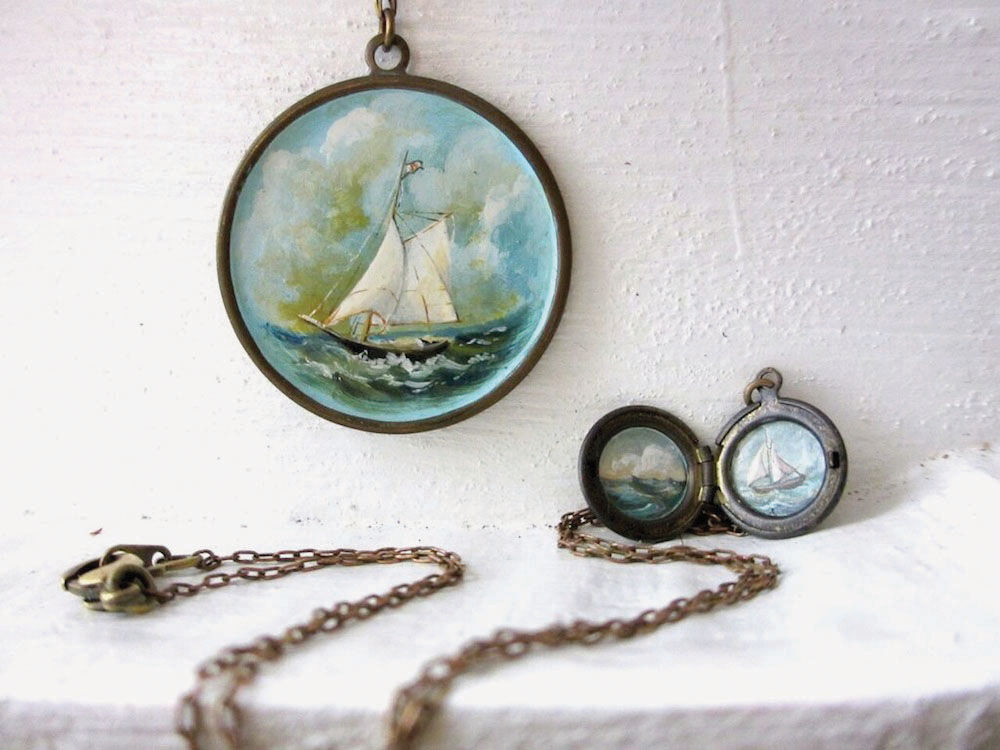 Work by Khara Ledonne from Think Small: The Tiniest Art in the World by Eva Katz, published by Chronicle Books 2018.

Khara Ledonne began her art career as a muralist in New York City, but after painting a mural at the Empire State Building, she hit a different sort of wall and decided to stop working on such a massive scale. The project propelled her to explore the opposite extreme: painting in miniature.
Unconventionally, Ledonne paints on the interiors of lockets. In Think Small, she described these surfaces as a pleasing escape from murals in that they are “personal, private, and don’t require scaffolding.” She’s also attracted to the challenge of painting on a very small scale. Most of her ideas are inspired by personal dares, like “Can I paint a brontosaurus in a locket? How about the entire solar system?” Indeed, many of her diminutive paintings depict vast, dramatic vistas, from star-studded night skies to wild seas. 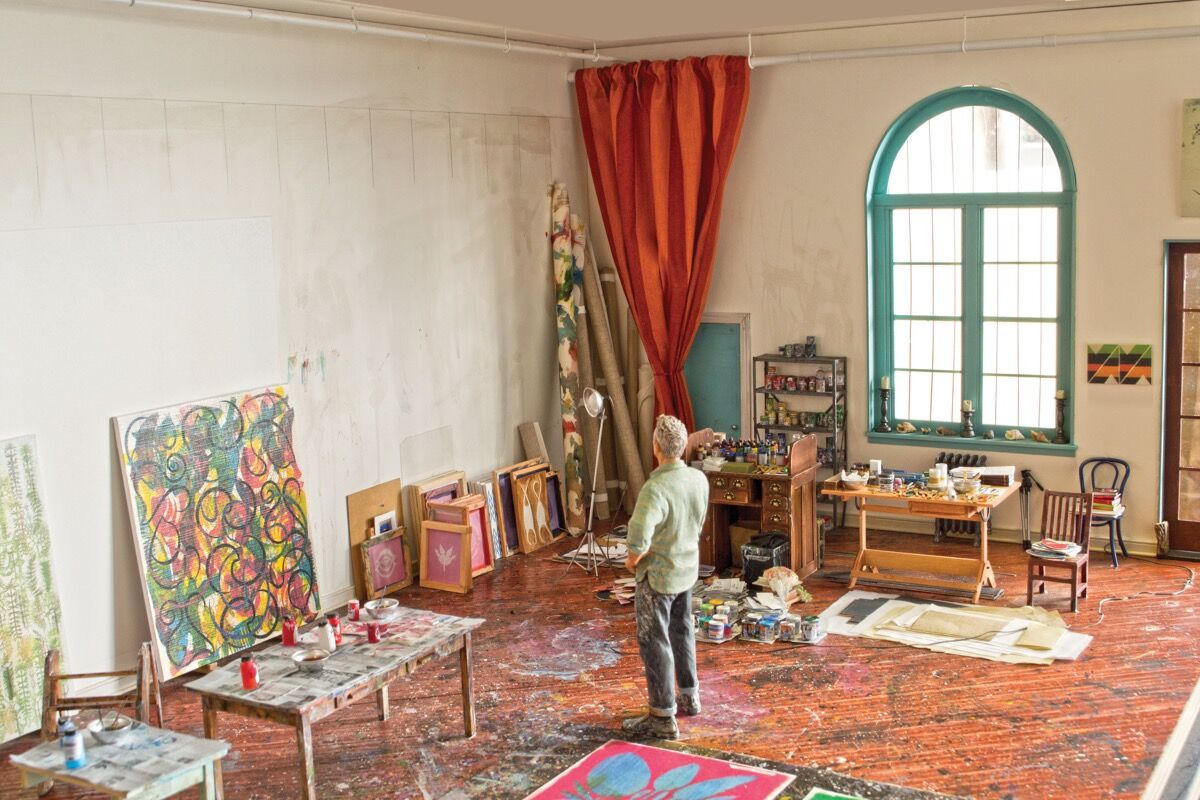 Work by Joe Fig from Think Small: The Tiniest Art in the World by Eva Katz, published by Chronicle Books 2018.

For Connecticut-based artist
Joe Fig
, work on small scale came to him “out of desperation,” as he recalls in Think Small. After making large paintings for years, he hit a creative block—and assembling pint-sized models of the scenes he’d previously depicted on canvas helped clear his mind.
While Fig vacillates between sprawling paintings and tiny three-dimensional pieces, he says that his small-scale work “gives the viewer a God’s eye perspective,” “creates a sense of voyeurism,” and “allows [him] to create a vast area within a reasonable amount of space.” Indeed, Fig shoehorns a lot of information into his miniature sculptural depictions of artists’ studios. Take a close look and you’ll find in-progress artworks, shelves littered with materials, and—often—a lilliputian artist thoughtfully observing her work. 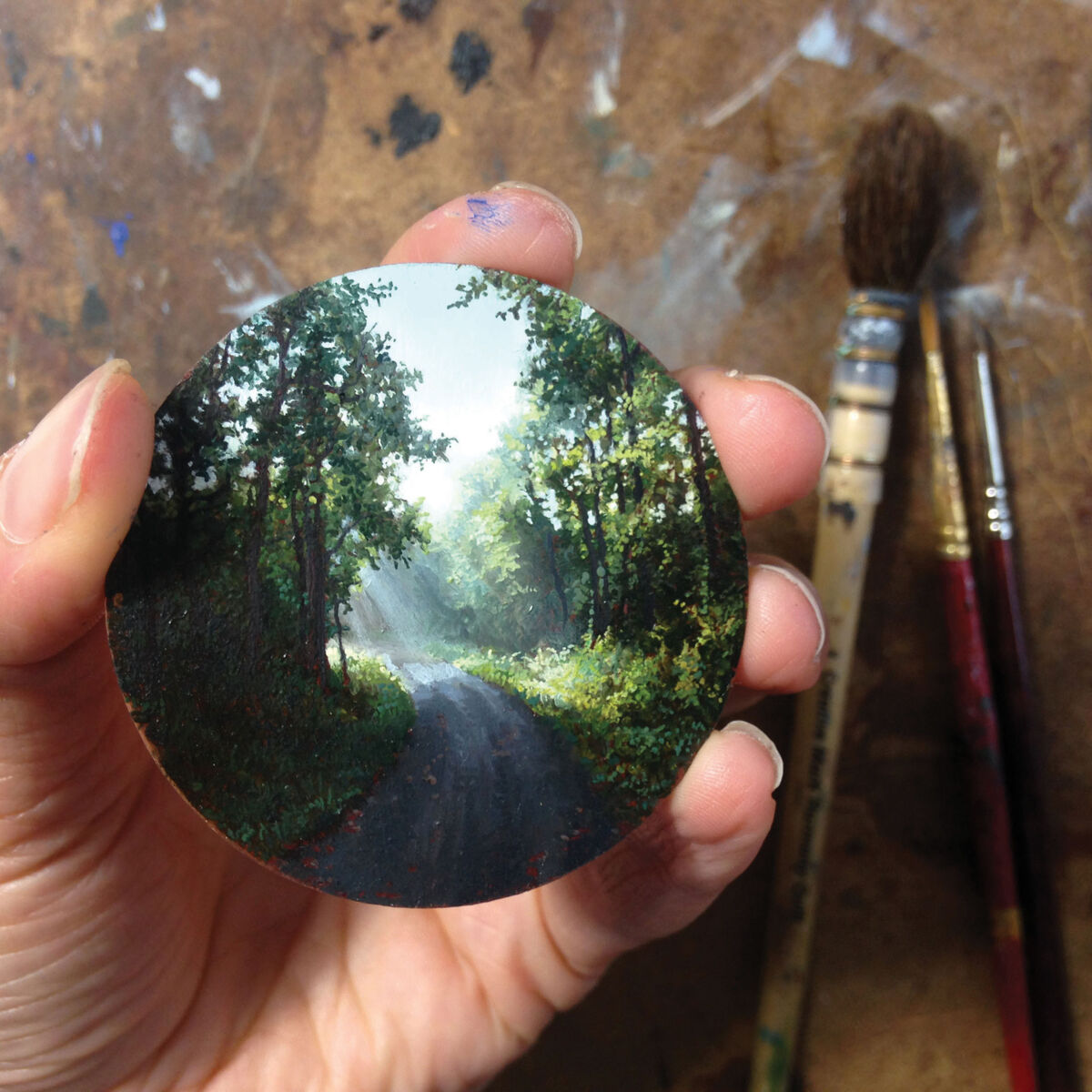 Work by Dina Brodsky from Think Small: The Tiniest Art in the World by Eva Katz, published by Chronicle Books 2018.

Dina Brodsky
’s miniature painting practice began when she was no more than five years old. During her first-ever art class, she was given a large sheet of paper and directed, by her instructor, to sketch. “I started on a drawing that took up about an inch of paper,” she recalls in Think Small. “[The teacher] told me to work bigger, and I was completely incapable of it.”
The instructor sent Brodsky home with a dismal review of her creative abilities, telling her mother that there was “nothing he could teach” the child. Even so, Brodsky never shook her desire to work on a small scale. As an adult, she’s combined the classical painting techniques she later honed in art school with her interest in Islamic miniature art and Medieval manuscript illumination.
These days, the Belarus-born, New York-based artist makes pint-sized oil paintings and drawings. In an ongoing series called “Cycling Guide to Lilliput,” she depicts the intricate landscapes she’s encountered on long distance bike rides. Strikingly, her circular canvases are a mere 2 inches in diameter. For Brodsky, each work represents “an attempt to capture a specific moment throughout my travels that I can return to vividly in my memory.” 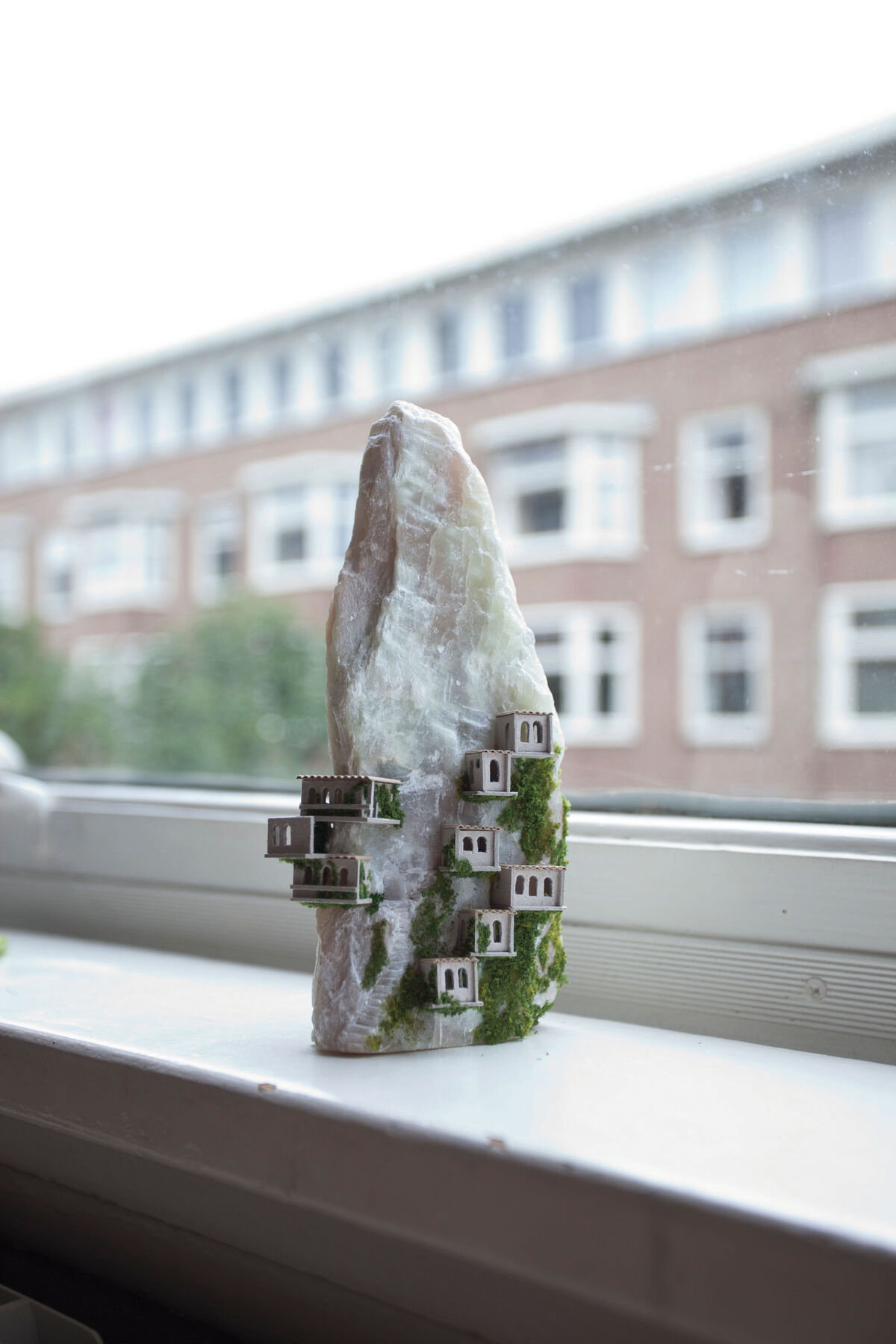 Work by Rosa de Jong from Think Small: The Tiniest Art in the World by Eva Katz, published by Chronicle Books 2018.

During her career in advertising, Rosa de Jong learned that less is more. “I don’t think that means everything should be clean and white,” she explains in Think Small. “It just means that you should be aware of what’s essential to your story and what’s not.”
The Amsterdam-based artist applies this same philosophy to her sculptures, which she erects within glass test tubes. The finished products resemble terrariums filled with mystical towns perched on lush mountains. She creates these tiny worlds by assembling rocks, sticks, and model train materials with tweezers, small knives, rulers, and—of course—patience. 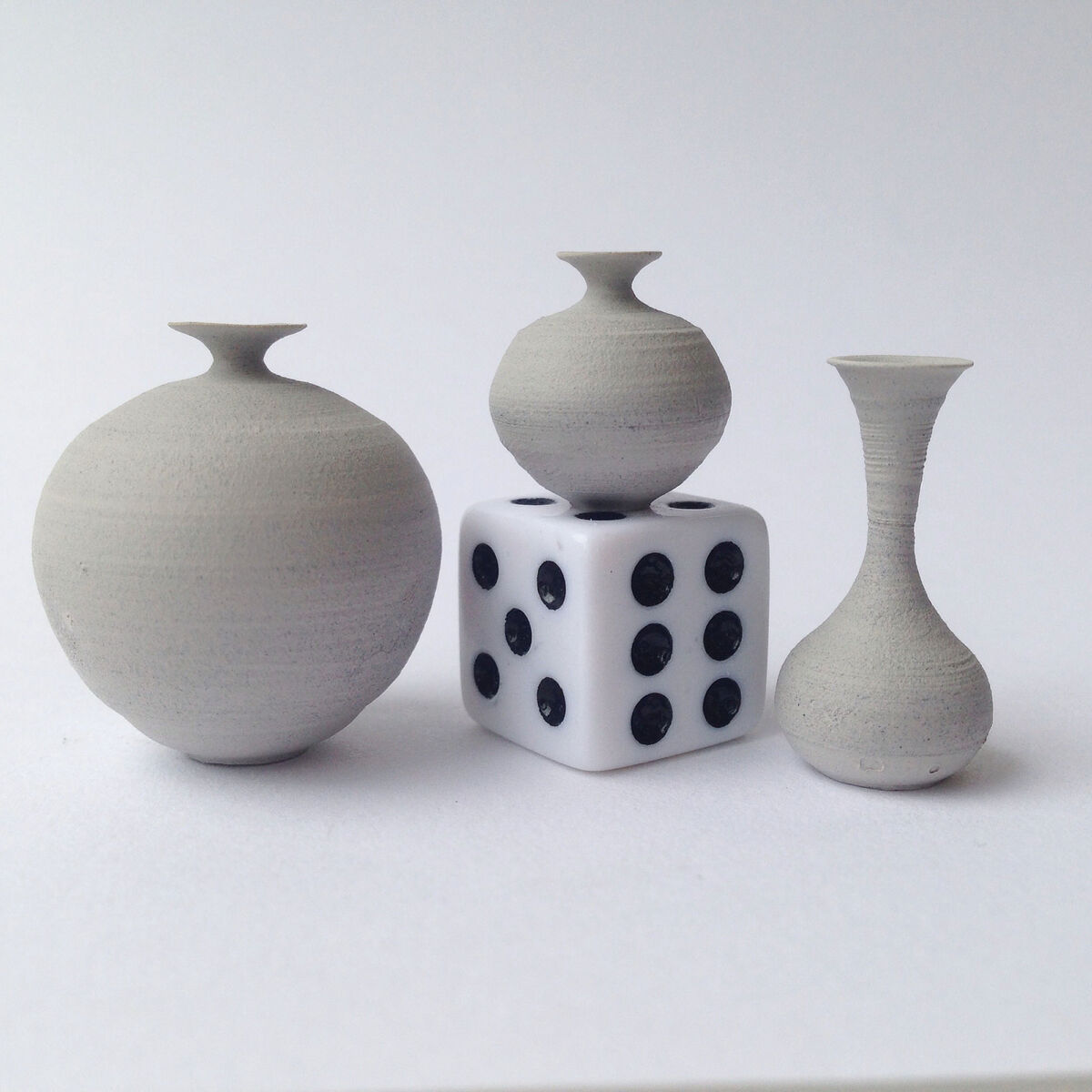 Work by Jon Almeda from Think Small: The Tiniest Art in the World by Eva Katz, published by Chronicle Books 2018.

Like other artists who work small, Jon Almeda was initially attracted to this scale because of the obstacles it presented to his ceramics practice. He’d grown tired of constantly throwing bigger and bigger vessels, and making tiny versions of them not only offered a change—but a welcome challenge.
Now, Washington-based Almeda’s elegant pots are often no larger than a quarter or penny. He makes them on a small wheel he designed himself, dubbed the Curio Wheel; he uses the tip of a pointer finger to shape the curves of his creations. While the majority of his work is small, he hasn’t completely abandoned larger pieces, and the different sizes he explores inform each other. “Creating small works has made a tremendous impact on my bigger pieces,” he explained. “I am infinitely aware of the subtleties of a great piece. It has definitely made me a better full-size potter.” 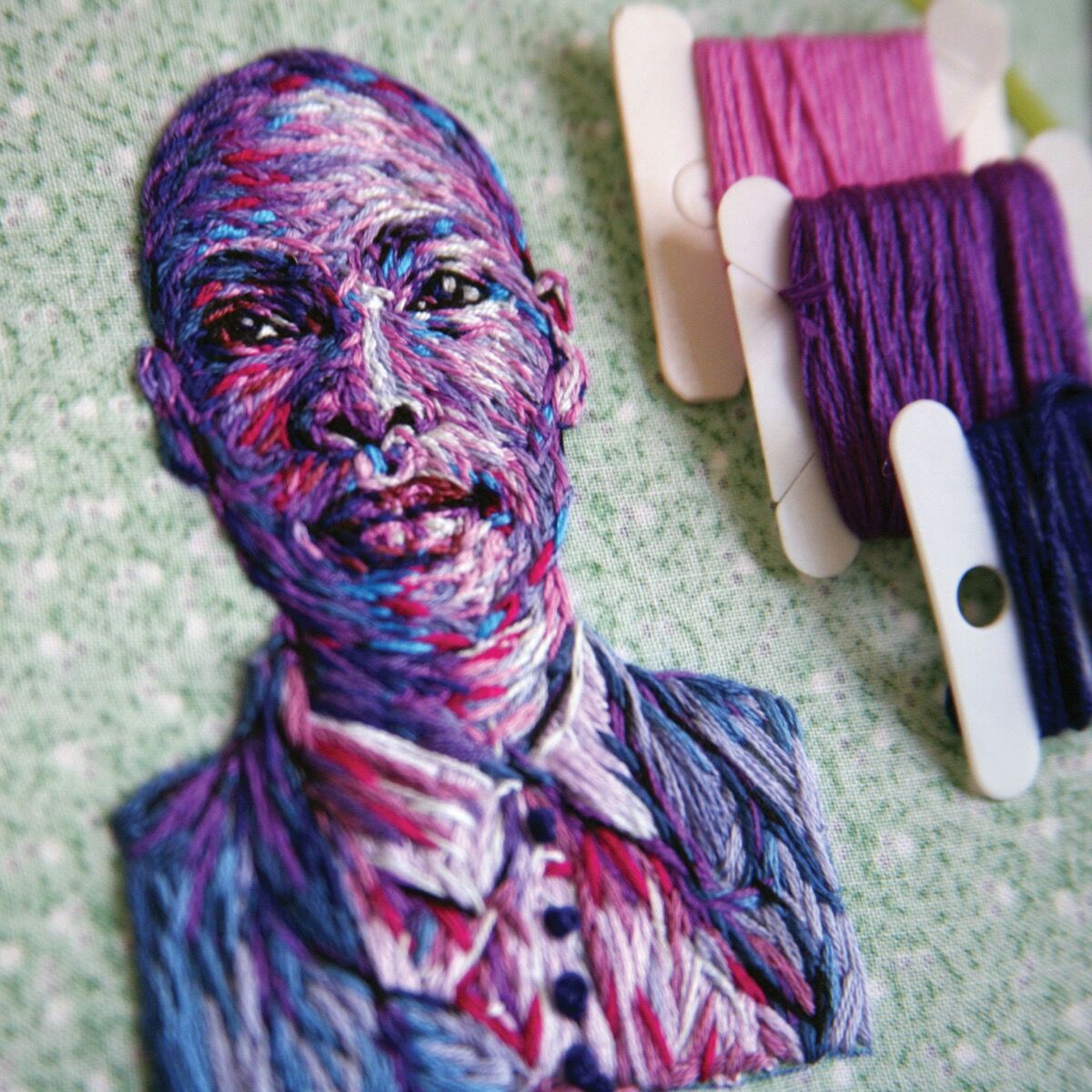 Work by Danielle Clough from Think Small: The Tiniest Art in the World by Eva Katz, published by Chronicle Books 2018.

A few years ago, embroidery artist
Danielle Clough
wanted to challenge herself, so she “started sewing really big and teeny tiny at about the same time,” she told Katz. Clough enjoyed both scales, but she continued embroidering small works because the process was uniquely portable. The Cape Town-based artist, designer, and art director keeps very busy, and likes that she can tote her tiny fabric canvases and spools of colorful thread with her wherever she goes.
Recently, Clough’s small-scale work has been focused on embroidered portraits, which riff on the practice of miniature portraiture popularized by English court painters, like
Hans Holbein
, in the 1500s. Clough often finds her subjects within her own community. Take the tiny, thread-hewn rendering of her sleeping friend, Sara, adapted from a photo Clough took. For another body of work called “Queer Africa 2,” Clough created portraits of nine Africans whose stories illuminate “the many ways in which we love each other on the continent,” she has said.
Alexxa Gotthardt
Related Stories