Inside Quinta da Regaleira, the Mystical Portuguese Palace Imagined by a Butterfly-Obsessed Millionaire 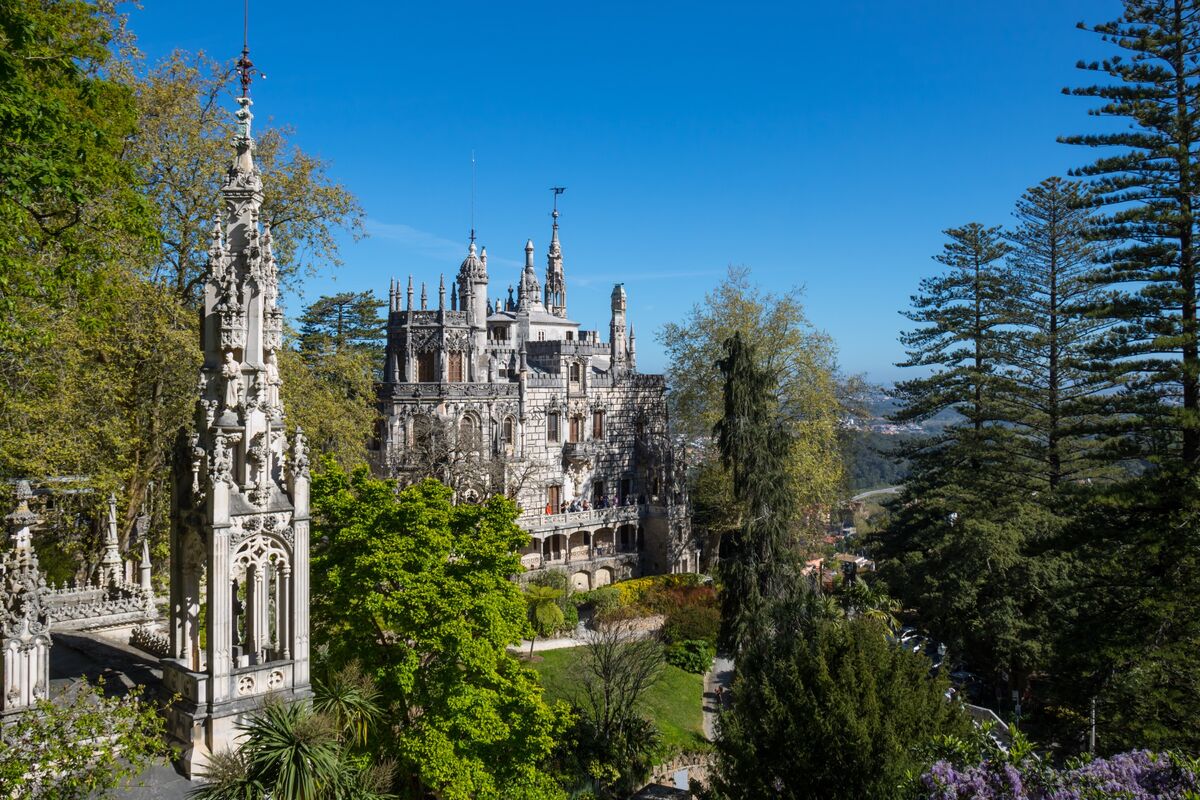 On a recent morning in the ancient Portuguese town of Sintra, mist rose from moss-encircled ponds and gathered around the tops of stone turrets and leafy palms. And through flowering vines and scatterings of tile-covered homes, you could just make out the silhouette of Quinta da Regaleira: an age-old estate steeped in opulence, mysticism, and the occult.
This is the landscape that Lord Byron once called “a glorious Eden”; an oasis where one could imagine that “every pool and stream has Nymphs in its waters,” wrote poet L.V. de Camões.
When I arrived in Sintra in mid-August on a pilgrimage to Quinta da Regaleira, a cool summer breeze moved through the town’s narrow streets; the air smelled of the ocean (the Atlantic borders Sintra’s western edge) and the hot-pink Bougainvillea blossoms that spill over courtyard walls. The environment was verdant, calm, and intoxicating—qualities that may well have attracted the eccentric millionaire António Augusto Carvalho Monteiro to the area in the late 1800s.
It was in this lush hamlet where he’d create Quinta da Regaleira, which he designed as a portal between the physical and metaphysical worlds. For Carvalho Monteiro, a journey through the landscape of shadowy grottoes, subterranean tunnels, dewy gardens, and seashell-encrusted fountains—all laden with mystical symbolism—represented the path to enlightenment, upon which he’d attain a greater understanding of himself and the world around him.
Carvalho Monteiro was born in 1848 in the Brazilian city of Rio de Janeiro into a wealthy family of Portuguese descent. As a young man, he moved between Brazil and Portugal, studying law at Portugal’s Coimbra University. But Carvalho Monteiro’s passions were stirred by entomology (the study of insects), malacology (the study of mollusks), and ornithology (the study of birds). 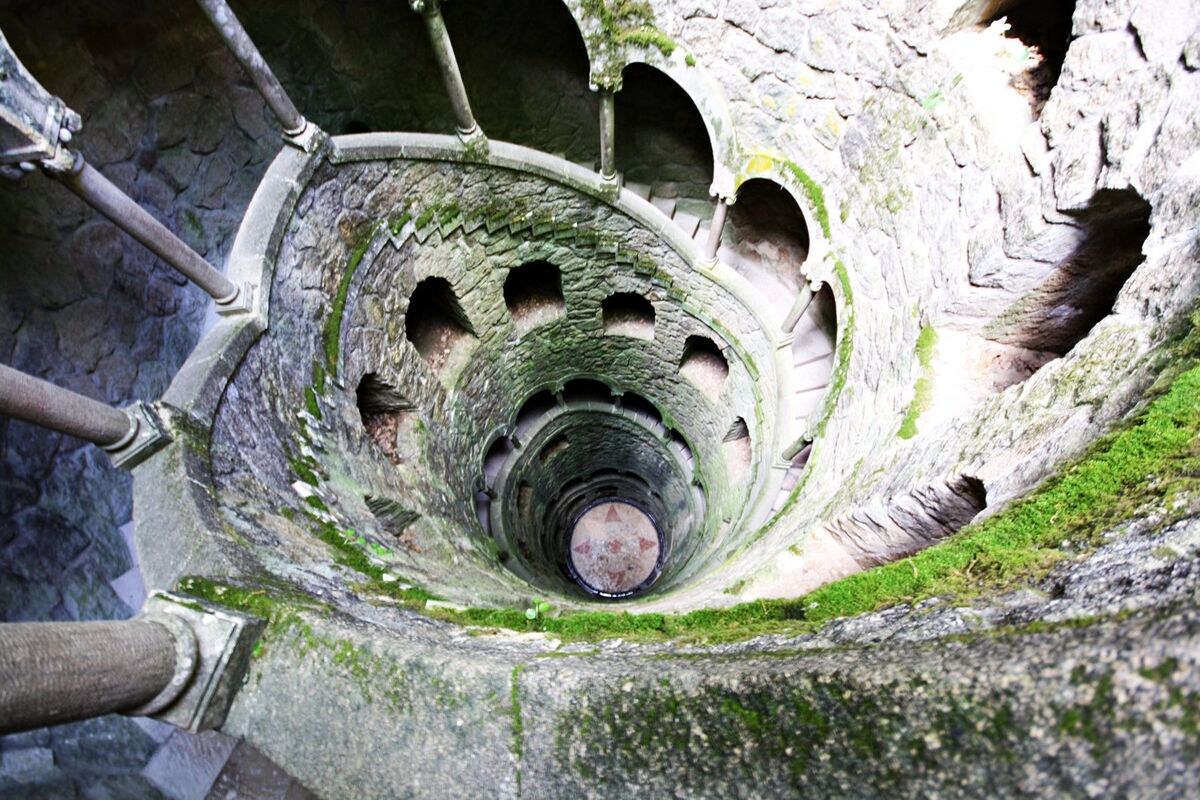 As early as 1871, in his early twenties, Carvalho Monteiro traveled to Dresden to meet Otto Staudinger, then the world’s foremost butterfly specialist. A deep, lifelong fascination with the natural sciences ensued.
After marrying and living in Brazil for several years, Carvalho Monteiro landed back in Portugal in 1876 to devote himself to his studies, becoming an active member of the Lisbon Geographical Society and the Portuguese Society of Natural Sciences. With his new wife, he settled in the grand Quintela Palace Farrobo on Lisbon’s stately Rua do Alecrim, where he housed his ever-growing collection of butterflies and moths (then the world’s second-largest), some 10,000 invertebrates, stuffed hummingbirds, art, clocks, iconography, and a vast library.
Around this time (records are minimal, so it is unclear exactly when), it seems that Carvalho Monteiro also became interested in classical mythology and esoteric philosophy. Books from his library point to an interest in alchemy, the medieval quest to formulate an immortality elixir, and Hermeticism, a philosophy in which wisdom is attained through contemplation of the mysteries of the universe. (Heremetics believed that the physical, mental, and spiritual planes were interconnected.) It’s been noted that the beliefs of the Freemasons, a secret society that uses symbols and coded language in rituals that have been linked to mysticism, also likely captivated Carvalho Monteiro.
But it wasn’t until Carvalho Monteiro purchased the country estate of Quinta da Regaleira in 1893, when he was in his forties, that he was able to fully express his passions. There, on a densely forested plot of land in Sintra that once belonged to the Baroness de Regaleira, he began to conceive of a temple to nature and spirituality, where the mysteries of the universe could be contemplated, wisdom attained, and magic conjured.
Construction began in 1898, after Carvalho Monteiro found the perfect person to realize his vision: Italian architect and set designer Luigi Manini. Manini was in the process of erecting a palace in the ornate, highly dramatic Manueline-Gothic style, its façade marked by imposing entrances and stone carvings that alluded to tempestuous seas, grand voyages, lionhearted heroes, and classical mythology. Carvalho Monteiro was sold, and enlisted Manini to help him build his Sintra arcadia. 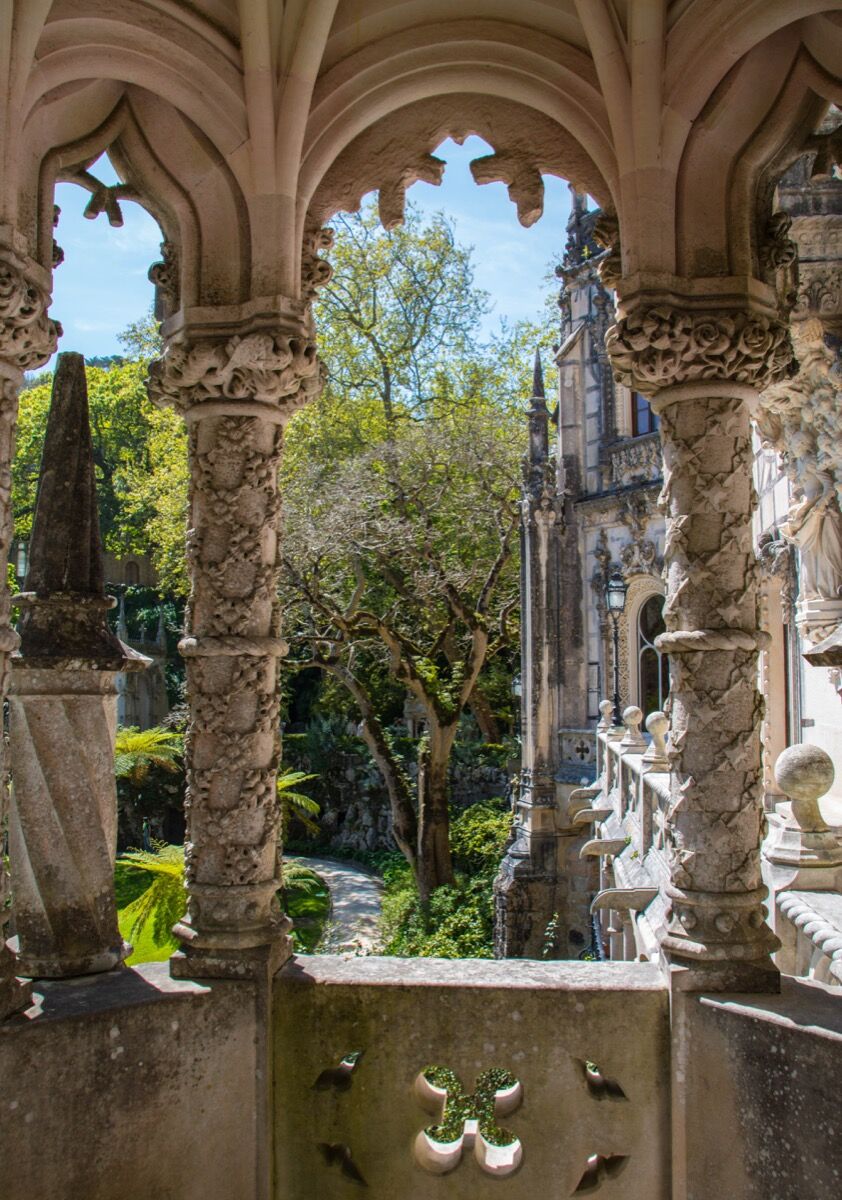 The gardens of the Quinta da Regaleira, Sintra, Portugal, 2017. Photo by Maria Eklind, via Flickr. 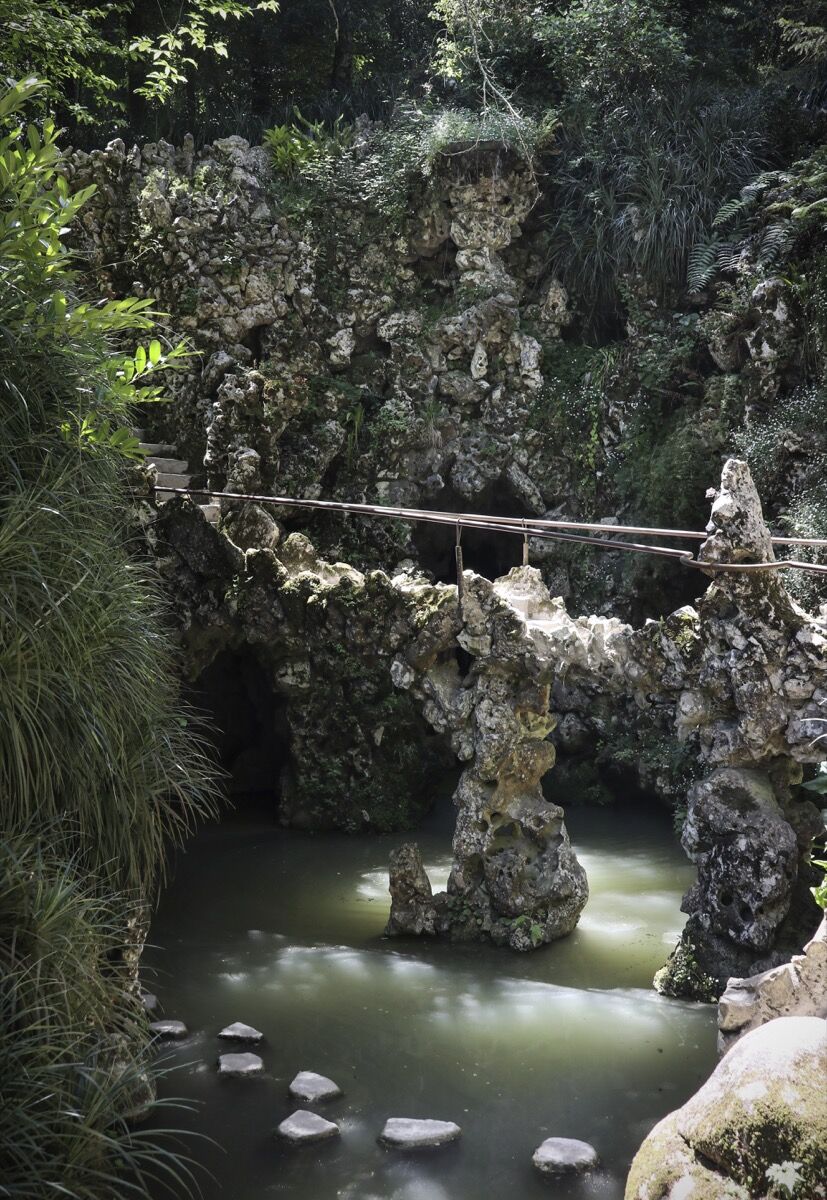 Advertisement
Today, the two men’s magnum opus remains largely intact. When I arrived, I was greeted by the Promenade of the Gods—a path lined with statues of mythical beings that embody Carvalho Monteiro’s many passions, both earthly and otherworldly. There is Orpheus, the legendary hero-bard who entrances wild animals with his voice; Flora, the field-wandering nymph, patron of flowers; Dionysus, purveyor of wine and revelry; Demeter, mother earth; and Hermes, the fleet-footed god of travel who leads the dead to the Elysian Fields of the underworld. Some of the sculptures are partially obscured by thickets of bright-green palms and bushes dotted with orange, fuschia, and purple blossoms.
Here, as plants and gods mingle, Carvalho Monteiro makes his intention for Quinta da Regaleira clear: to connect the natural and the spiritual.

Quinta da Regaleira
View Slideshow
5 Images
Carvalho Monteiro’s castle, a towering stone structure with turrets and intricate stonework, sits at the end of the path. Its ornate façade introduces the mystical symbolism embedded across the the rest of the labyrinthine property. One balcony is guarded by four statues of fantastical, winged animals—lizard, bat, eagle, and rabbit—each representing different alchemical instruments and operations. Plant motifs abound across stonework, woodwork, and interior mosaics; budding poppies embody the cycle of life; craning oak trees represent the connection between heaven and earth.
Inside, two phrases are inscribed into the castle’s thick walls and hint at the transformative journey through the gardens—the crown jewel of the property—that lies ahead. One wall bears the alchemical adage “Visit the Interior of the Earth, and Rectifying (Purifying), you will find the Hidden Stone (True Medicine).” Nearby, a quote from an unknown source reads: “Lead me from illusion to reality, from darkness to light, from death to immortality.”
Indeed, Carvalho Monteiro and Manini designed the landscape that surrounds the castle to reflect—and perhaps stimulate—the journey towards enlightenment, spiritual awakening, and the sublime. From the winding paths that cut through the property, it looks like Shangri-La: a tropical paradise bursting with flowers, fruit trees, and birdsong, interspersed with glassy ponds and slow-moving streams. 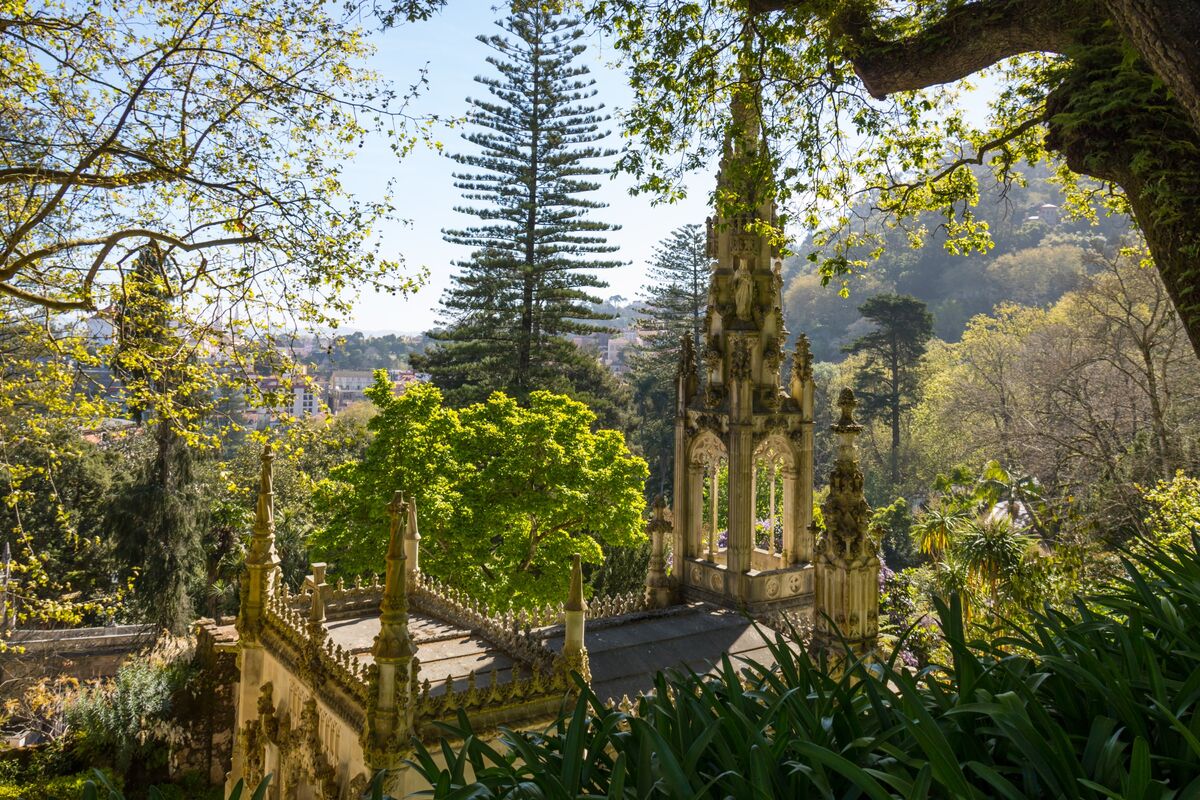 But the real magic came when I left the main walkways and passed under the waterfall into a grotto, climbed the steps of the freestanding stone tower, and descended down the mossy, damp well. These hidden doorways all connected to a underground labyrinth that lay beneath the garden’s lush surface. They also represented the beginning of Carvalho Monteiro’s transcendental quest to better understand himself, the natural world, and the mysterious realm that lay beyond it.
Many of Quinta da Regaleira’s subterranean tunnels lead to what Carvalho Monteiro referred to as the “Sacred Mountain,” and the approximately 90-foot-deep chamber that lies at its core. I arrived at its base through a pitch-black passageway, which connected from one of the estate’s grottoes. Above me, a network of stairwells twisted towards a small sunlight at the top. This was Carvalho Monteiro’s famed Initiation Well, an underground tower embodying Axis Mundi—that invisible channel connecting earth and the heavens.
Every aspect of the well is symbolic. The spiraling staircase has 10 levels, inspired by the final scenes in Dante’s Inferno, in which Dante ascends to the 10th and final rung of the heavens. The number of stairs, 139, is also significant—when you add up these numerals (1 + 3 + 9), you get the number 13, which symbolizes death and rebirth in esoteric philosophies.
These details feel inconsequential, though, compared to the experience of climbing the well after a long period of walking through unlit tunnels. Slowly and carefully (the stairs are narrow, slippery, and uneven), I walked towards the light above. At the top, the whole estate cascaded below—a wild, heady expanse of plants, ponds, and curious visitors. It wasn’t hard to imagine Carvalho Monteiro ascending these same stairs on his path towards enlightenment.
While Carvalho Monteiro and Manini were in the throes of erecting Quinta da Regaleira, they also designed the millionaire’s tomb. Nestled in Lisbon’s Cemitério dos Prazeres, it is unlocked with the same gold key as Carvalho Monteiro’s mystical Sintra estate. It bears similarly enchanting iconography, too. A stone butterfly sits a the center of the door. The winged insect wasn’t just Carvalho Monteiro’s favored entomological subject, it is also symbolic: Like a chrysalis shedding its cocoon, the butterfly represents the soul freeing itself from the body and embarking on, perhaps, the journey from “darkness to light, from death to immortality.”
Alexxa Gotthardt
Related Stories