Inside a New U.N. Program in Mali That’s Training Its Staff to Protect At-Risk Art 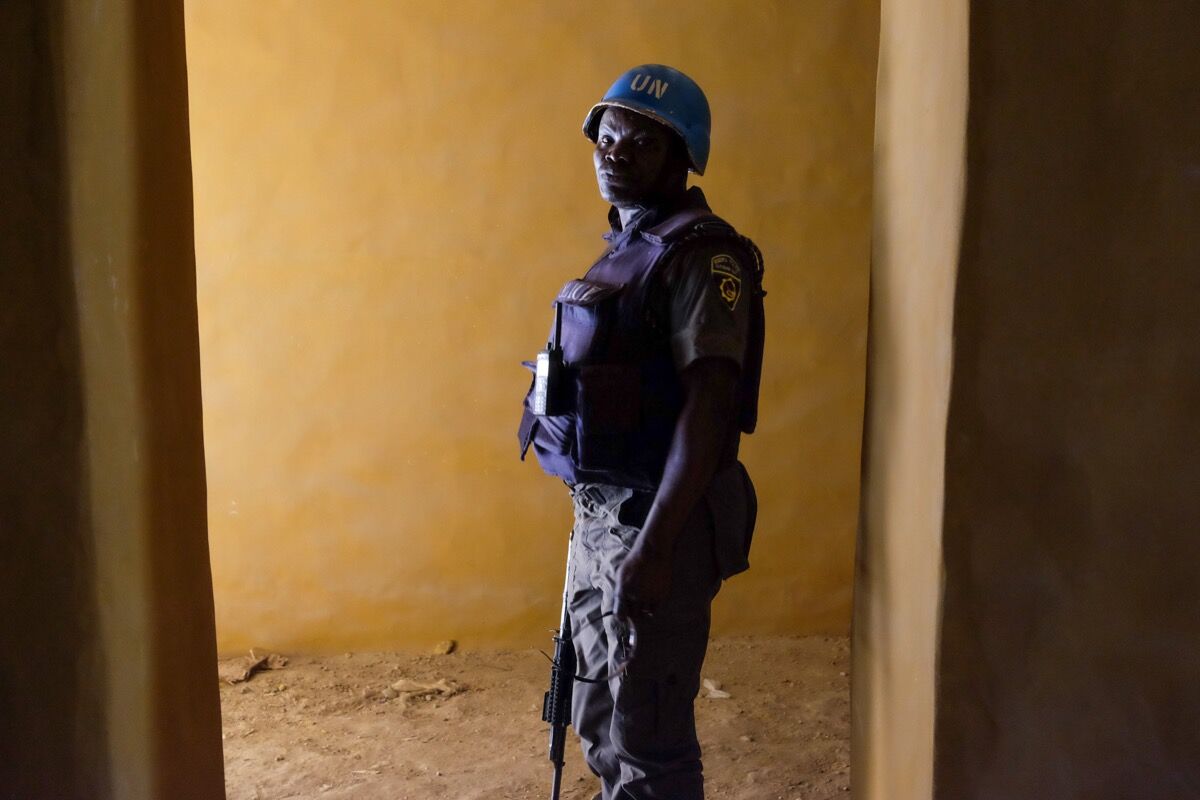 An armored SUV carrying three United Nations police officers rolled into the streets of Timbuktu, Mali, on a 105-degree day in April. Nine officers armed with assault rifles followed in a truck.
They were headed where pilgrims and visitors have flocked for centuries in this ancient city: Djinguereber Mosque, a 14th-century earthen structure that recalls a time when Timbuktu was a center of learning and a wealthy trading point.
The U.N. police officers continued on to another of the city’s great mosques, Sankoré, then passed a library where centuries-old manuscripts had been stored, and paused outside three mausoleums of Muslim saints before returning to base.
What might in other circumstances be a sightseeing trip was in fact a standard patrol for the police officers, who are part of the peacekeeping operation in Mali known as MINUSMA. With the help of Mali’s Ministry of Culture and UNESCO, the U.N. has been training these officers and other personnel to play a role in the protection of cultural heritage. A similar program is also underway within Mali’s military.
But both initiatives face limitations that, according to some experts, leave Mali’s heritage at risk, especially to looters, who have thrived in the insecure north. 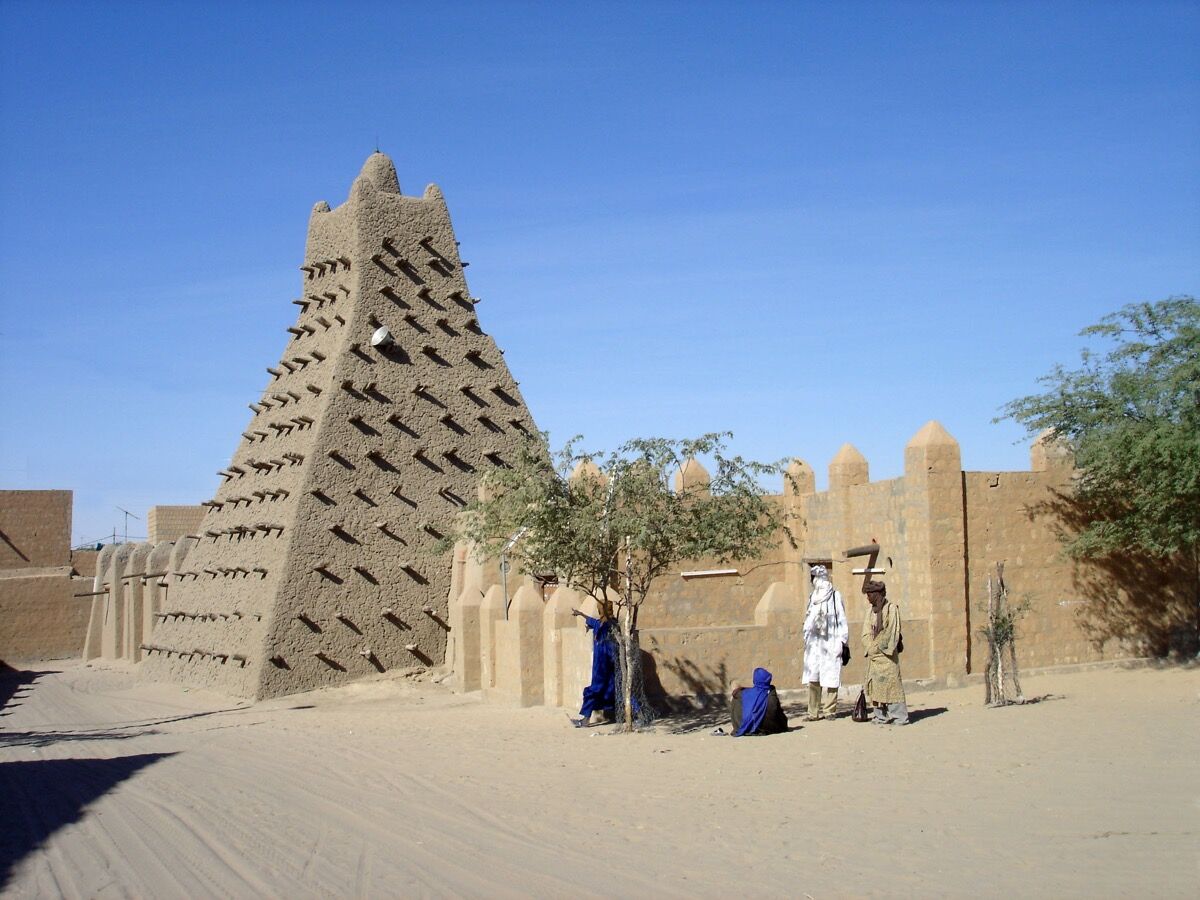 Timbuktu is Mali’s most famous city, but the country boasts three other UNESCO World Heritage sites. And historical Malian artifacts are still sought-after by collectors: terracotta vessels, wooden sculptures, masks, and manuscripts. In 2014, a carved wooden hermaphrodite figure created by the Djennenke people (of 11th–14th-century Mali) sold at auction for $1.5 million.
But in recent years, this cultural heritage has come under attack. In 2012, Islamist militants hijacked a separatist rebellion and took over key cities in the north. In Timbuktu, radicals from an extremist group affiliated with Al Qaeda decreed a puritanical form of sharia law and declared many of the city’s sites idolatrous.
Its “morality brigade,” known as Hesbah, tore down at least 14 mausoleums, shattered the wooden door of the Sidi Yahia mosque, and burned more than 4,000 manuscripts on subjects ranging from religion to astronomy.
In a matter of months, they destroyed centuries of history.
This carnage was successfully tried as a war crime at the International Criminal Court in The Hague, and the mausoleums were rebuilt with the help of UNESCO. The damage also spurred the U.N. Security Council to include an order on the protection of cultural heritage in the mandate that established MINUSMA in April 2013, a first for any peacekeeping mission.
Four years later, the Security Council unanimously adopted a resolution that will allow all future peacekeeping operations to include similar responsibilities. 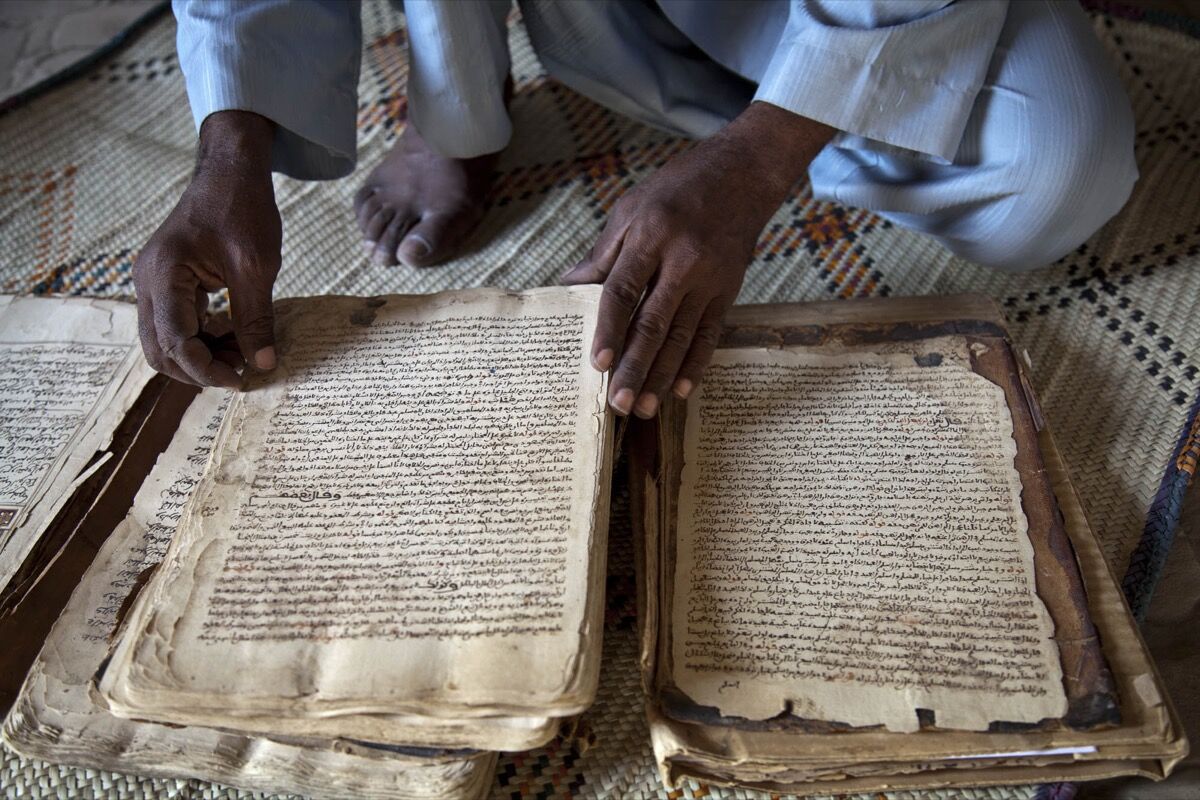 Abdul Wahid shows a manuscript from the 14th century at his house in Timbuktu. Photo by MINUSMA/Marco Dormino, via Flickr.

Advertisement
“We can see in Mali how it is really important to take the subject of culture as a peacekeeping, peace-building tool,” said MINUSMA’s Culture Officer, Nadia Ammi.
To implement the mandate, incoming MINUSMA personnel attend a class on the importance and nuances of Mali’s culture and the laws of heritage protection.
Fallo Baba Keita, a conservation expert who works at Mali’s National Museum and consults with Unesco, has taught these classes every other week since late 2014. By his count, some 3,000 MINUSMA military, police, and civilian personnel have been briefed so far. His main goal is to impress on the group the value of cultural heritage. Once they feel it, Keita said, they will act.
His class starts with the rules and regulations—the principal being the 1954 Hague Convention, the first international treaty focused on the protection of cultural heritage in the event of armed conflict—and continues into an overview of Mali’s cultural history, and a lesson on how to identify objects and sites. Masks and sculptures are easy to spot, but it can take a seasoned eye to recognize stone remains in a desert, or a mud and brick mausoleum in a city of earthen buildings. 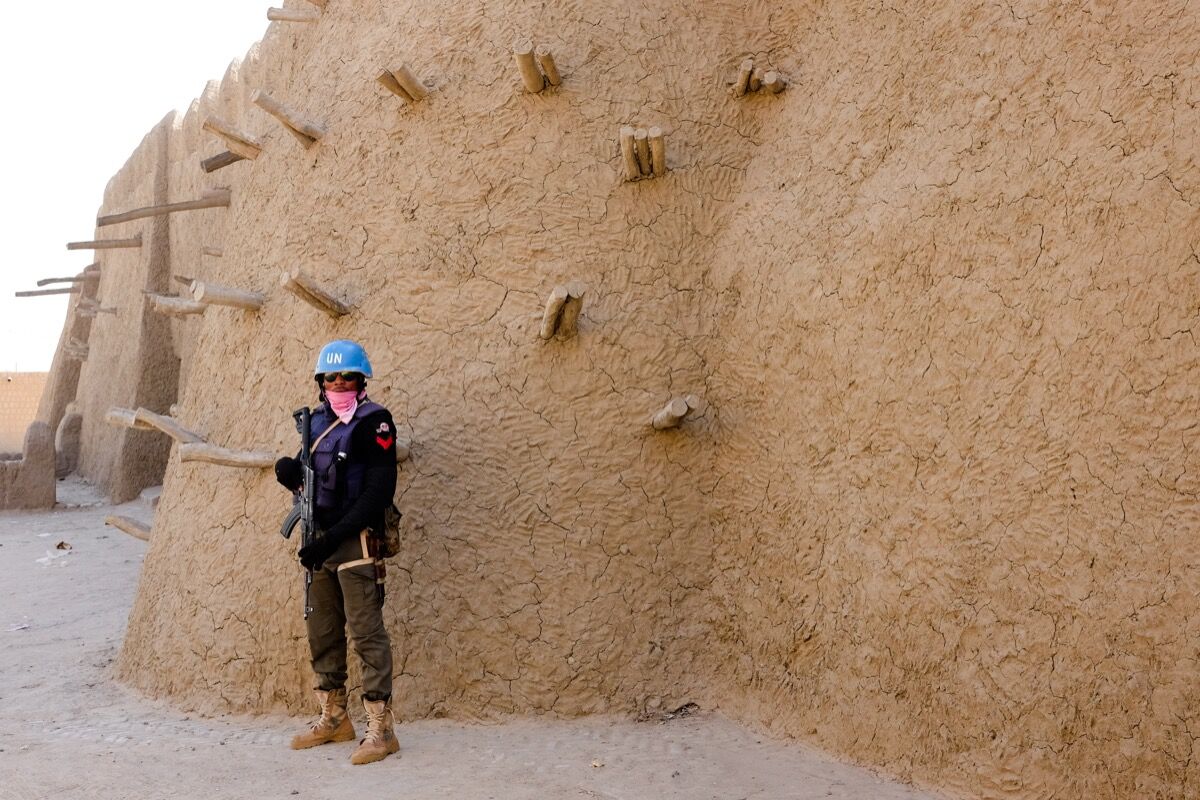 He encourages the personnel to request advice from village elders. And failing that, Keita hands out a pocket-sized Cultural Passport, a cheat sheet of Mali’s sites and artifacts, complete with pictures, illustrated maps, and geographic coordinates. The training is vital, said Keita, “particularly when you see we are facing more and more situations in war where cultural heritage becomes a target.”
The class made an impression on at least one MINUSMA police officer on the patrol in Timbuktu. He carried a worn copy of the Cultural Passport, which included many of the iconic structures the officers would visit on their route. The police officer, who was not authorized to speak publicly and so cannot be named, said that patrolling these sites was not only urgent work, but it had also improved relations between the U.N. police and the local population.
Kalifa Cissé, a volunteer at Djinguereber Mosque like his father and grandfather before him, said MINUSMA had brought sand and lights to help repair an outdoor prayer area. For the moment, he said, he was not worried about its safety. Outside of Timbuktu, MINUSMA has also reported on cases of looting, helped to investigate the destruction of a monument, and supported the mapping of a site.
Meanwhile, Mali’s military has been building its own cultural training program. Since the occupation, the Ministry of Culture has helped host several workshops, bringing together heritage experts and military troops.
Army Colonel Nèma Sagara attended two of these workshops. She was initially skeptical about whether cultural protection should be a military concern, remarking that at one time, she would herself have brought down a historic building in order to achieve a mission. 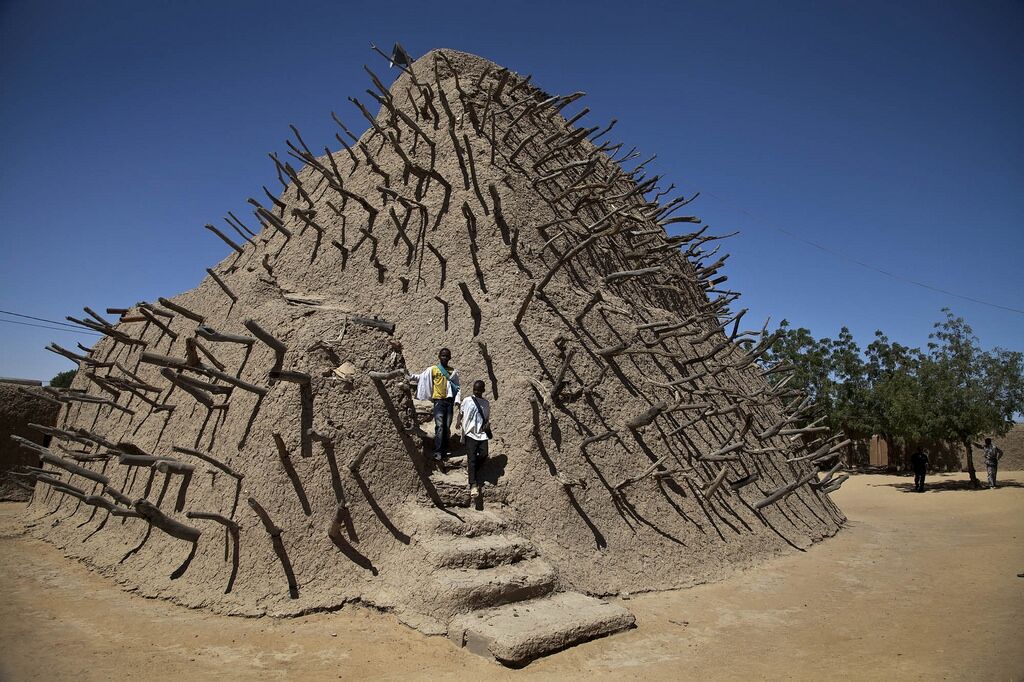 Before the occupation, she said, Mali’s military had no training on the matter. But that is set to change. New recruits will now be briefed on the location and importance of sites and methods of cultural protection. Sagara has even suggested establishing a specialized cultural protection division, but has not yet heard back from her superiors.
The programs of MINUSMA and the national military face significant limitations in the field, however.
Between historic sites, the patrol in Timbuktu passed through an area of town that a police officer said ranked at the highest security level. MINUSMA is one of the U.N.’s deadliest active peacekeeping missions, with 116 fatalities to date, according to U.N. records. Safeguarding civilians and U.N. personnel takes priority over culture, said Ammi.
The cultural mandate is also limited in its scope. It states that MINUSMA is there to “assist” the Malian authorities, who bear the primary responsibility of protecting cultural heritage. “If [the authorities] ask for our help, we support them,” Ammi said, “depending on our capacities and priorities.”
“It is not possible to guard a cultural site every day,” she added.
Malian military forces have incorporated historic sites into some of their patrols, said Colonel-Major Modibo Mariko, who heads Mali’s Army Museum. But like MINUSMA, they must grapple with practical problems. “The country is big and we have limited funds,” Mariko said. 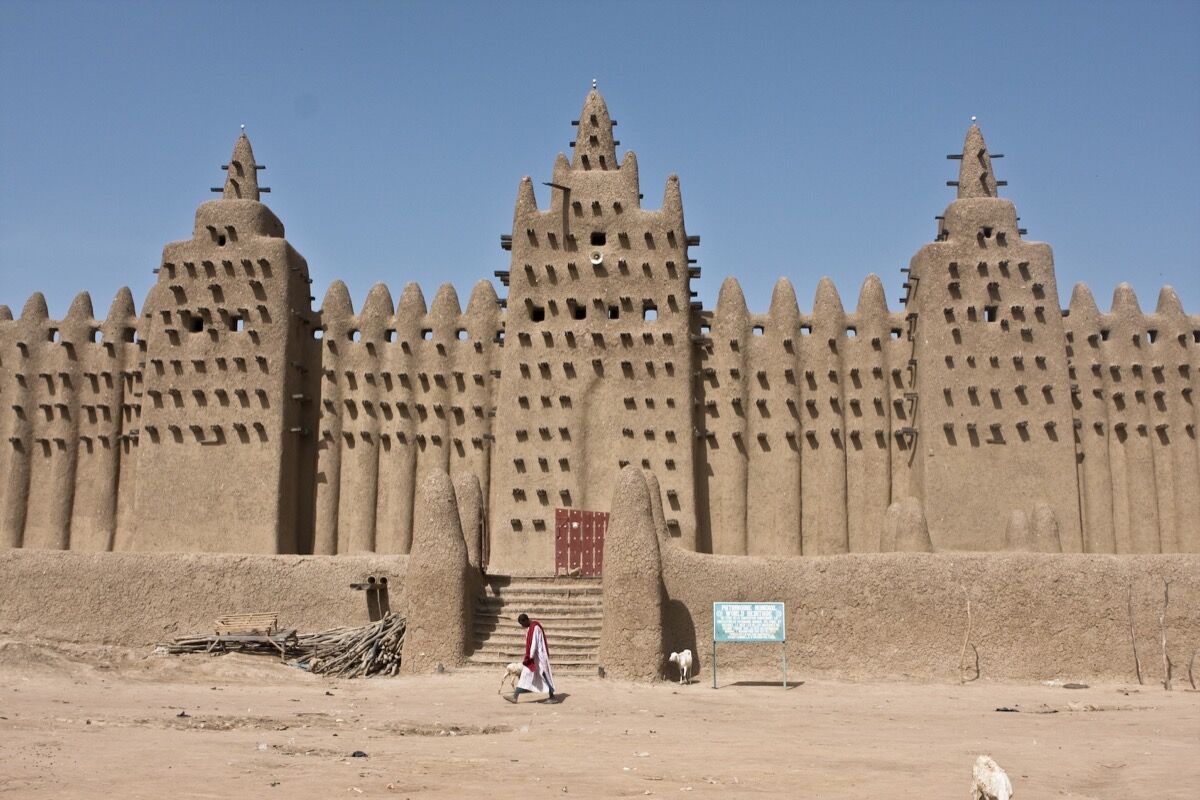 This worries El Boukhari Ben Essayouti, the head of the Ministry of Culture’s mission in Timbuktu. He fears that without permanent guards at sites, extremists will return and wreak havoc once more. Raised in Timbuktu, Essayouti remained there for the first three months of occupation. He witnessed his town’s destruction, and when the occupation ended, he returned to help rebuild.
Undoing the work of the extremists, he said, made him a target for kidnapping and attack. But he is determined to continue his cultural preservation work.
Alongside the damage wrought by extremists, sites are also being destroyed by a quieter force: looters. The problem is only made worse by the instability that follows conflict, said Mamadou Cissé, who is Essayouti’s counterpart in a town called Kangaba.
That danger has made it difficult to guard and research sites outside of major cities in the north, leaving them vulnerable to plunder. A list of looting cases Cissé compiled shows that the problem is widespread and ongoing. But it might be even greater than imagined. Mali lacks a complete inventory of all its sites, making it difficult to know what’s under threat, or even what’s already been stolen.
The severity of looting spurred the International Council of Museums to include an “emergency” section for Mali in its Red List of West African Cultural Objects at Risk, which includes manuscripts and terracotta sculptures. The council has advised anyone purchasing objects similar to those on the list to “pay close attention to the provenance and legal documentation,” given the risk of illicit trafficking. 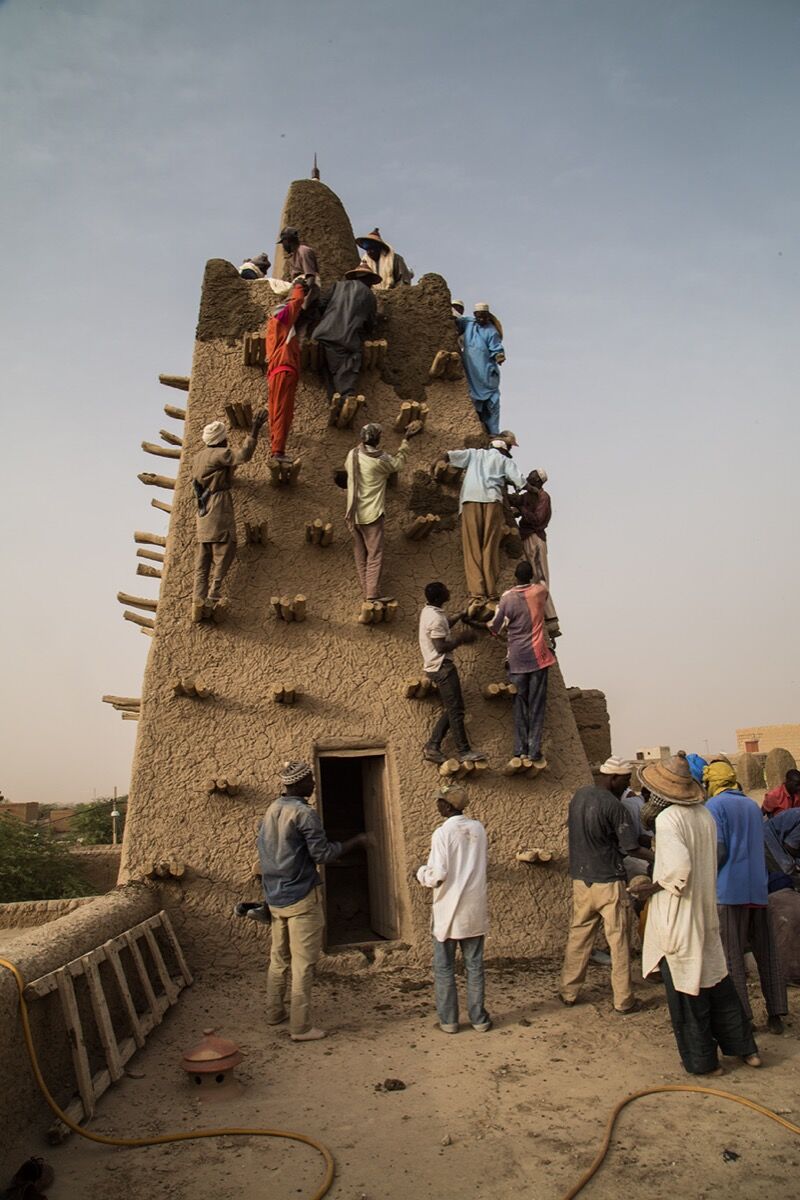 Inhabitants of Timbuktu meet for the traditional event of plastering of the Djinguereber Mosque each year. Photo by MINUSMA-Tiecoura N’DAOU, via Flickr. 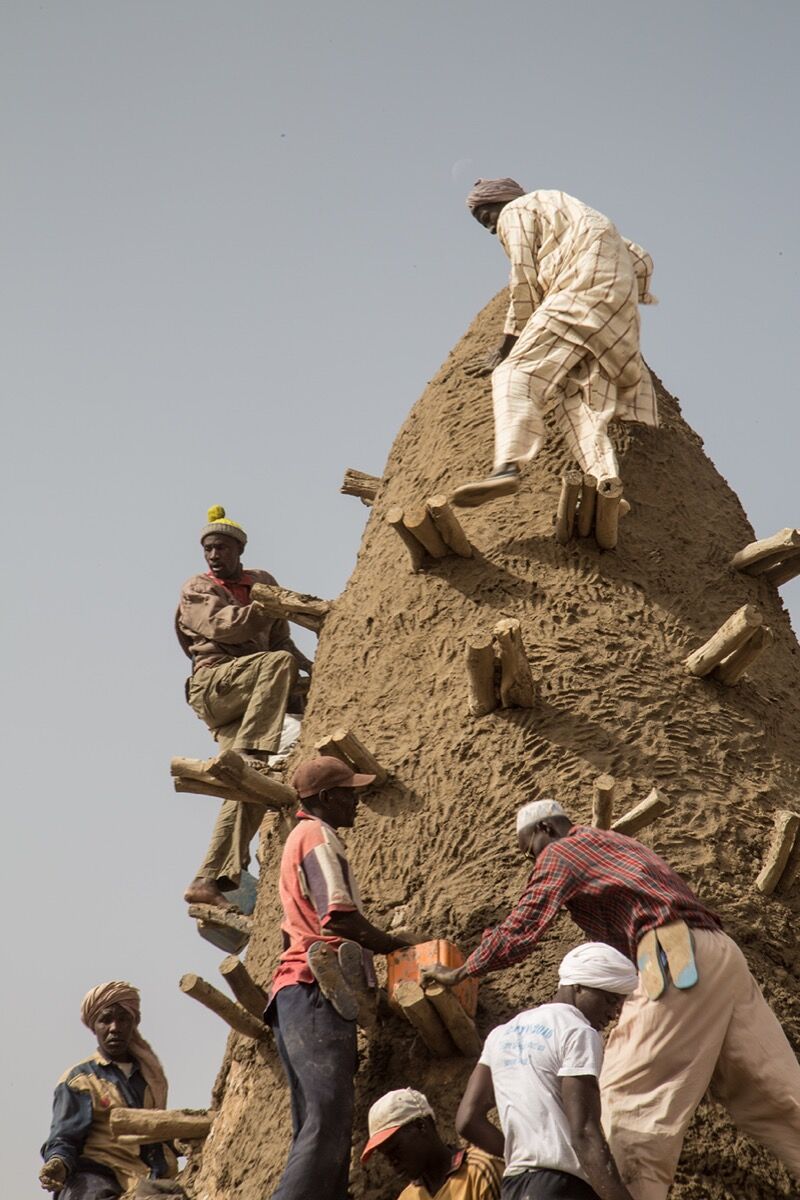 Inhabitants of Timbuktu meet for the traditional event of plastering of the Djinguereber Mosque each year.  Photo by MINUSMA-Tiecoura N’DAOU, via Flickr.

“It is like for drugs,” said Elhadj Baba Wangara, describing the criminal networks that practice looting. A police commissioner with the international policing organization Interpol, who specializes in heritage protection, he said traffickers take advantage of poverty in towns, encouraging residents to sell artifacts for a pittance. When you are hungry, Wangara said, you are unlikely to demand a great deal of money.
“Fighting against that is my passion,” he said.
When asked about the destruction by militants in 2012, Wangara paused for a moment, too moved by the painful memory to speak. “It is the soul of Timbuktu that they wanted to destroy,” he said, “but it is not possible.”
The patrol in Timbuktu arrived back at base around sunset as another was scheduled to leave. The last in the rotation returned at 5 a.m. the next day. And three hours later, just after sunrise, they started again.
—Mark Rivett-Carnac
Related Stories