Inside the Secret Home of Genius Italian Architect Carlo Mollino 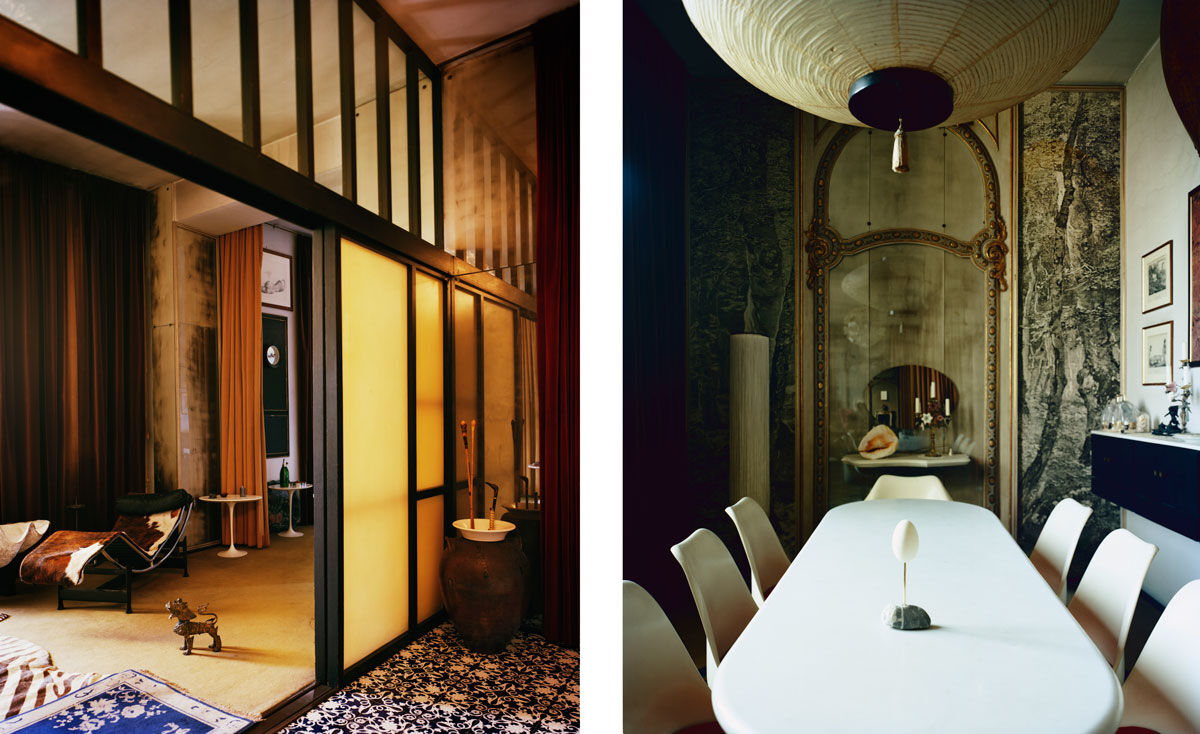 Carlo Mollino
was a man with as many talents as secrets.
He was a wunderkind engineer, a trailblazing architect, an intrepid photographer of the surreal and the erotic, an award-winning race-car designer, a decorated stunt pilot and downhill skier, and a passionate occultist. But he was also, despite his many achievements, a mysterious hermit whose motivations are still being pieced together now, over 40 years after his death. And through that process, his legacy is only just becoming known to even some of the most art- and design-obsessed among us.
I’ll admit that I was among the uninitiated, at least until I made a trip to Turin last month and spent an afternoon at Casa Mollino, one of the polymath’s several secret apartments that he kept hidden from his friends and acquaintances. (
Carol Rama
, for instance, a late Turinese artist and dear friend of Mollino, didn’t even know the abode existed—and she lived just around the corner.) Since arriving in Turin, I’d heard whisperings of Mollino and his hidden home, resurrected in 1999 as a museum by two members of his small but ardent cult following—an Italian design expert named Fulvio Ferrari and his son Napoleone. 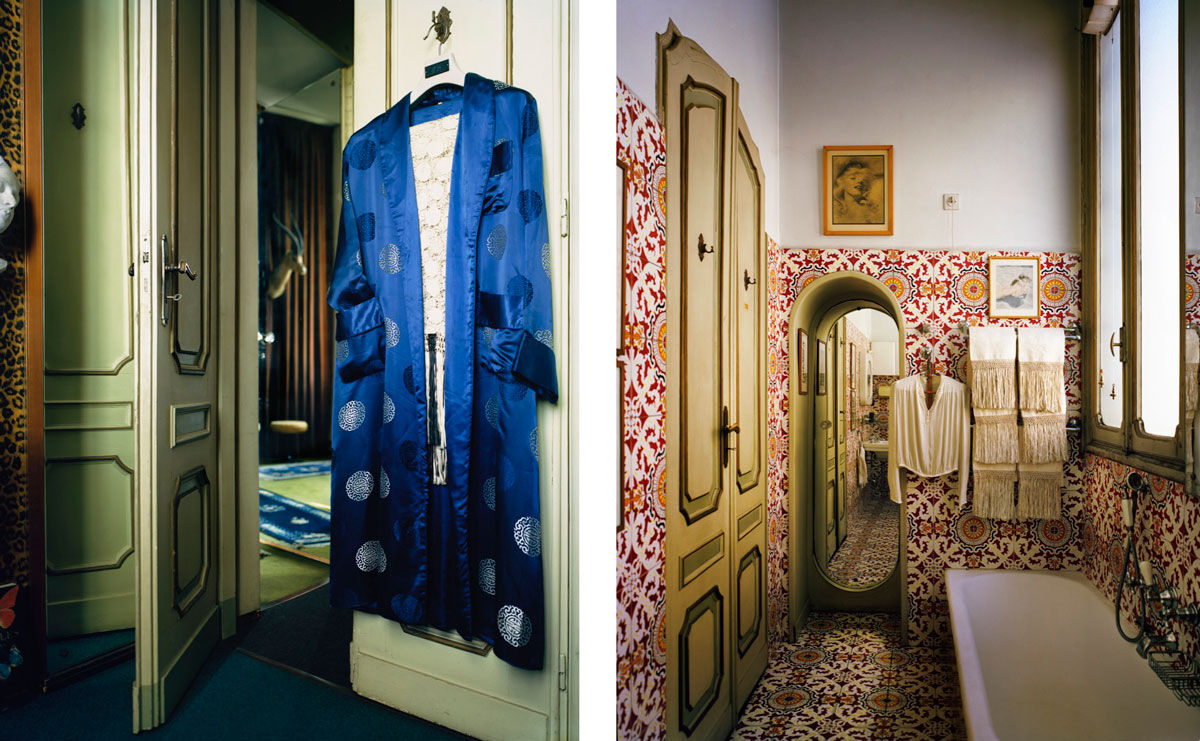 The two-story villa, which sits on the edge of Turin’s River Po, was intricately designed by Mollino as a shrine to his favorite objects. It’s believed among the Turinese that the home is the perfect embodiment of his genius, eccentric brain. That it was filled with bizarre curiosities and his now-signature erotic photos (which he also kept shrouded during his lifetime). That you could feel his presence when you sat in one of its sinuous chairs, designed by Mollino himself. And that despite perfecting the apartment for 13 years, from 1960 until his sudden death in 1973, he had never actually spent the night there. Suffice it to say, I was intrigued.
Along with Turin’s fantastic cuisine and rich artistic legacy, the city is also known as a nexus of magic. According to occultists, Turin occupies points on both the black (dark, negative) and white (light, positive) magic triangles; it is the only location, the world over, that can say it holds a place on both. It’s also chock full of necromancers, psychics, official exorcists (the Archbishop of Turin has appointed six of them), and artists informed by this mystical atmosphere. It was with this in mind that I rung Casa Mollino’s doorbell. 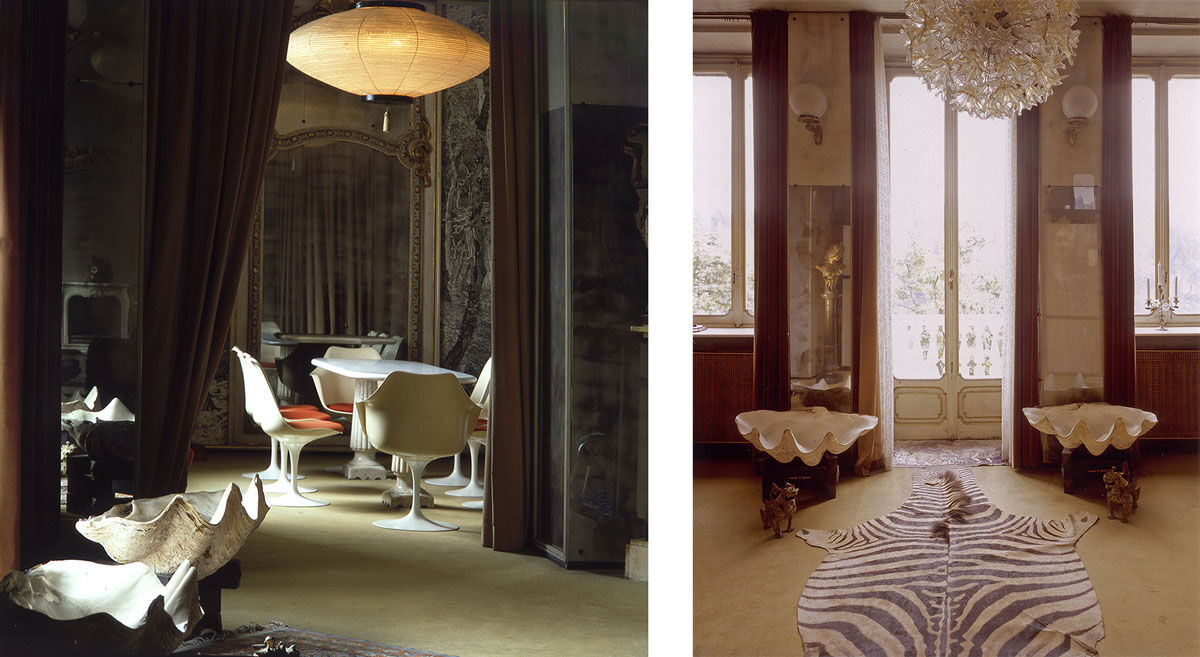 Advertisement
Ferrari opened the door, hastily, rushing me in. His eyes were glittering, and his tufts of gray hair bobbed up and down as he directed me to sit in a small, hot pink velvet chair. “Mollino’s life is that of a genius, of a completely extraordinary man,” Ferrari cooed, settling into a seat opposite mine. “We have one hour, but it would take more than a month to explain who he was. Luckily, Casa Mollino offers many clues. His presence is everywhere.” His eyes drifted around the space, taking in a zebra-skin rug, sculptures of a disembodied foot and a horse’s head, a flower that bore a seashell in place of a bud, and a fresco sporting an image of a nude Roman sculpture, with a large leaf superimposed over its package.
From there, Ferrari launched into the abbreviated story of Mollino’s life. He was born in 1905, the son of a very wealthy engineer. By the age of six, he was already drawing cross-sections of car engines and cameras with great accuracy. One drawing, in Mollino’s archive, which is housed on Casa Mollino’s upper floors, shows an outdoor scene; it’s bordered by a note of shock from his teacher: “Carlino drew this drawing in perspective, without any help, at the age of six.” 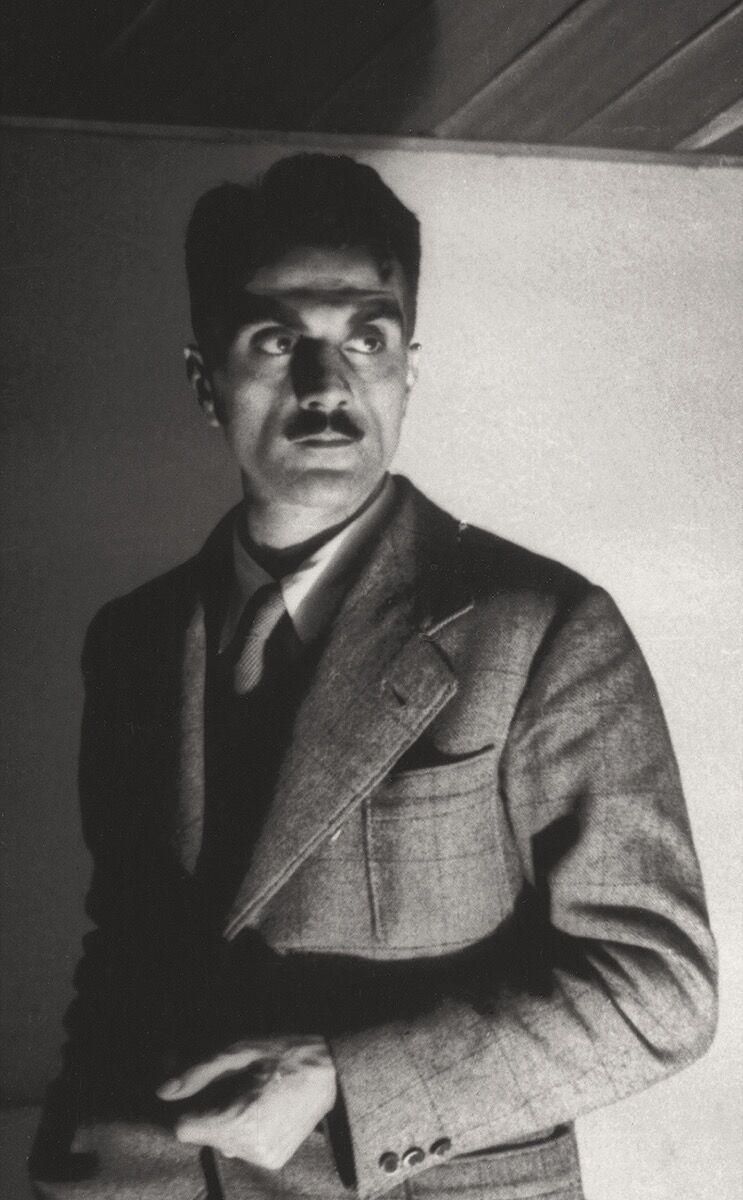 As we made our way through the apartment, Ferrari pointed to artworks, pieces of furniture, souvenirs, and photos that evidenced Mollino’s many achievements, born of a cascade of intense obsessions. We passed drawings of Mollino’s architectural masterpiece—the red-velvet swathed, womb-shaped Teatro Regio opera house in Turin—and a sinuous chair that arced like the small of woman’s back. But perhaps most intriguing were the glimpses into Mollino’s fixations that fell outside of design. We stopped at a portrait of Austrian ski champion Leo Gasperl. “Mollino and Gasperl were great friends. Both were obsessed with increasing the speed of skiing,” explained Ferrari, as he pulled out a book filled with illustrations and diagrams for a downhill technique that Mollino began to conceptualize at the age of 30.
Mollino also experimented with race-car driving, Ferrari continued, designing the Damolnar Bisiluro, or “Twin Torpedo,” with Mario Damonte and Nardi in 1955—which would hold the 750 cc category record at the historic 24-hour Le Mans race two years in a row. And, after inheriting his father’s fortune in 1954, he discovered flying. Mollino bought a whopping seven planes, and began to patent inventions that would make the then new-fangled machines perform acrobatics with greater fluidity. “In 1962, the chief of the acrobatic panel of the Italian State wrote Mollino a letter,” Ferrari said, pointing to the piece of paper. “In it, he explained that it was not possible to have performed better than Mollino did. He was simply the best.” 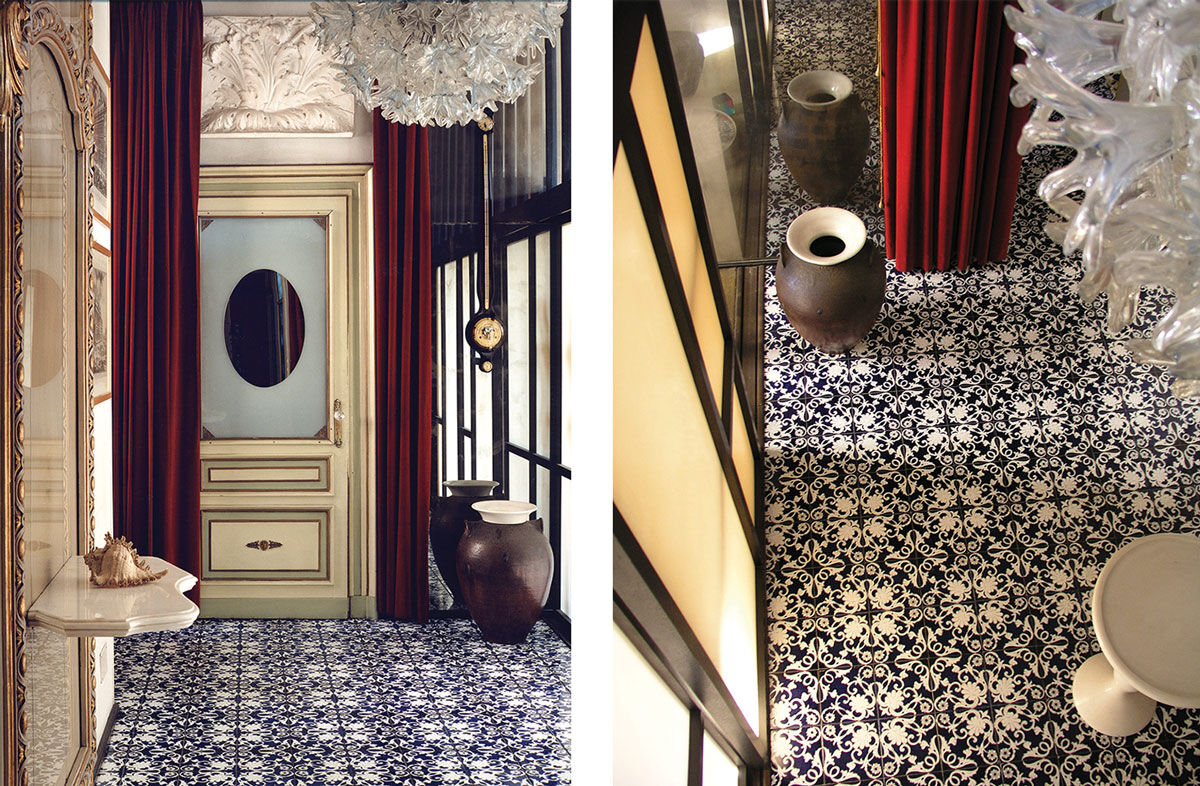 As we moved from room to room, a picture of Mollino—a restless genius, with more energy than he could possibly expel, obsessed with beauty and perfection—began to coalesce. “Mollino never explained exactly why he created this house, but it contains every aspect of him—many that he wanted to shield from people during his life,” Ferrari said. We entered a room that immediately felt like the apartment’s inner sanctum. Its floor is coated with blue carpet, and its walls with leopard-print paper and painted butterflies behind glass, as if they might appear in a natural history museum. On the walls, there are several images of nude women. They are just a few examples of the countless erotic photographs Mollino took in his lifetime. He shared them with no one during his waking days, but they appear here in his private dwelling. More than any other room in the villa, it felt like a shrine to Mollino’s true self.
According to Ferrari, a bed shaped like a boat is one of the biggest clues to Mollino’s identity. “We know from the many books Mollino purchased during his life that he was very interested in ancient Egyptian culture and their vision of the afterlife.” The apartment, he went on to explain, was organized by Mollino exactly as a Pharoah’s tomb would be—a fact confirmed by a local Egyptologist who works at Turin’s highly respected Egyptian Museum. “It’s here, in this room, in this bed or boat, perhaps, where Mollino began his journey to the afterlife.” Looking down at the blue carpet, the color of a river, it seemed ready to whisk the boat-bed away. I imagined the handsome, swarthy, tempestuous Mollino lying on the bed, heading towards the hereafter. I could almost feel his presence in the room. 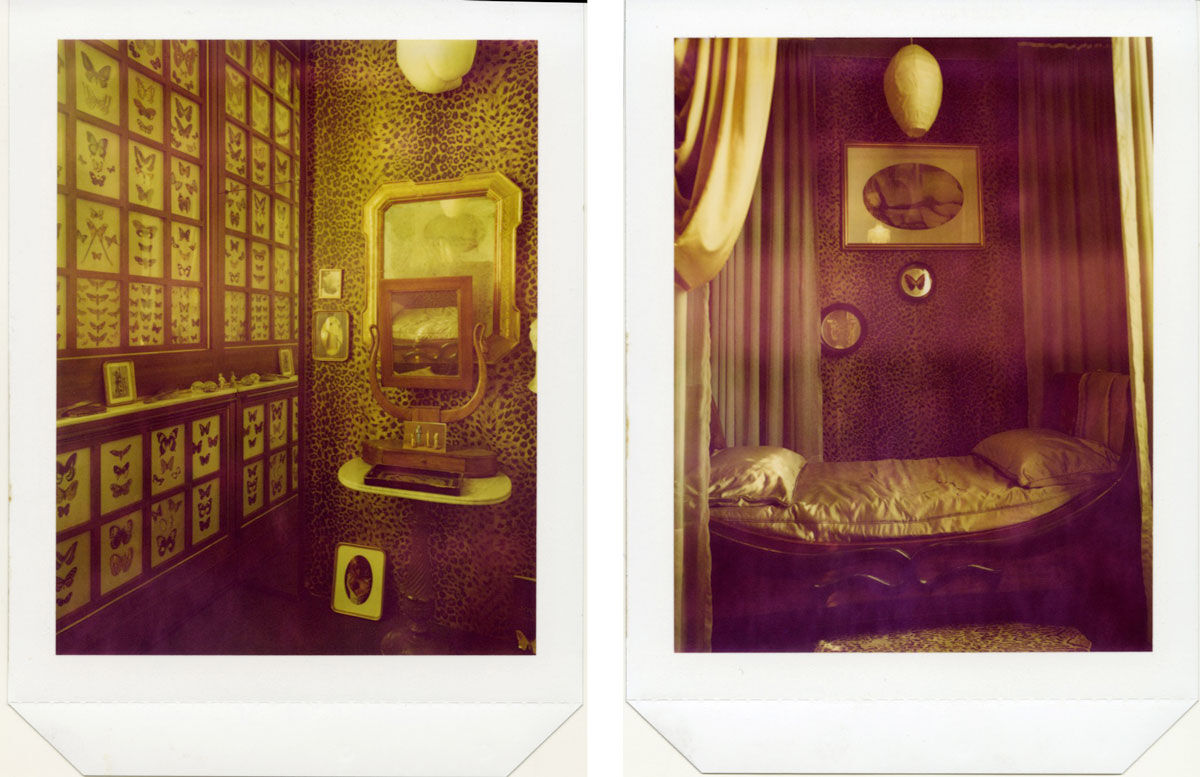 “It’s clear that Mollino created this space as one where he envisioned living for eternity, where he could be his true self,” said Ferrari as we made our way out of Casa Mollino and into its garden. As he walked over to a bush of roses, he explained that the garden is the last of his remaining projects at the villa. “I think I’ve finished everything else,” he said. Ferrari, whose diverse accomplishments—he began his career as a chemist, then became a restaurateur, then a pioneering Italian design dealer and expert—tend to mirror those of Mollino, has devoted the last 17 years of his life to understanding Mollino’s many mysteries. “But who knows. Casa Mollino is a black hole. I’ve learned that much,” he laughed, looking down at his hands, which were scratched and bleeding from a morning spent attempting to resurrect Mollino’s garden, and perhaps, in the process, the enigmatic architect-photographer-occultist himself.
Alexxa Gotthardt
Related Stories