Inside the Weird and Wonderful World of Pet Portraits 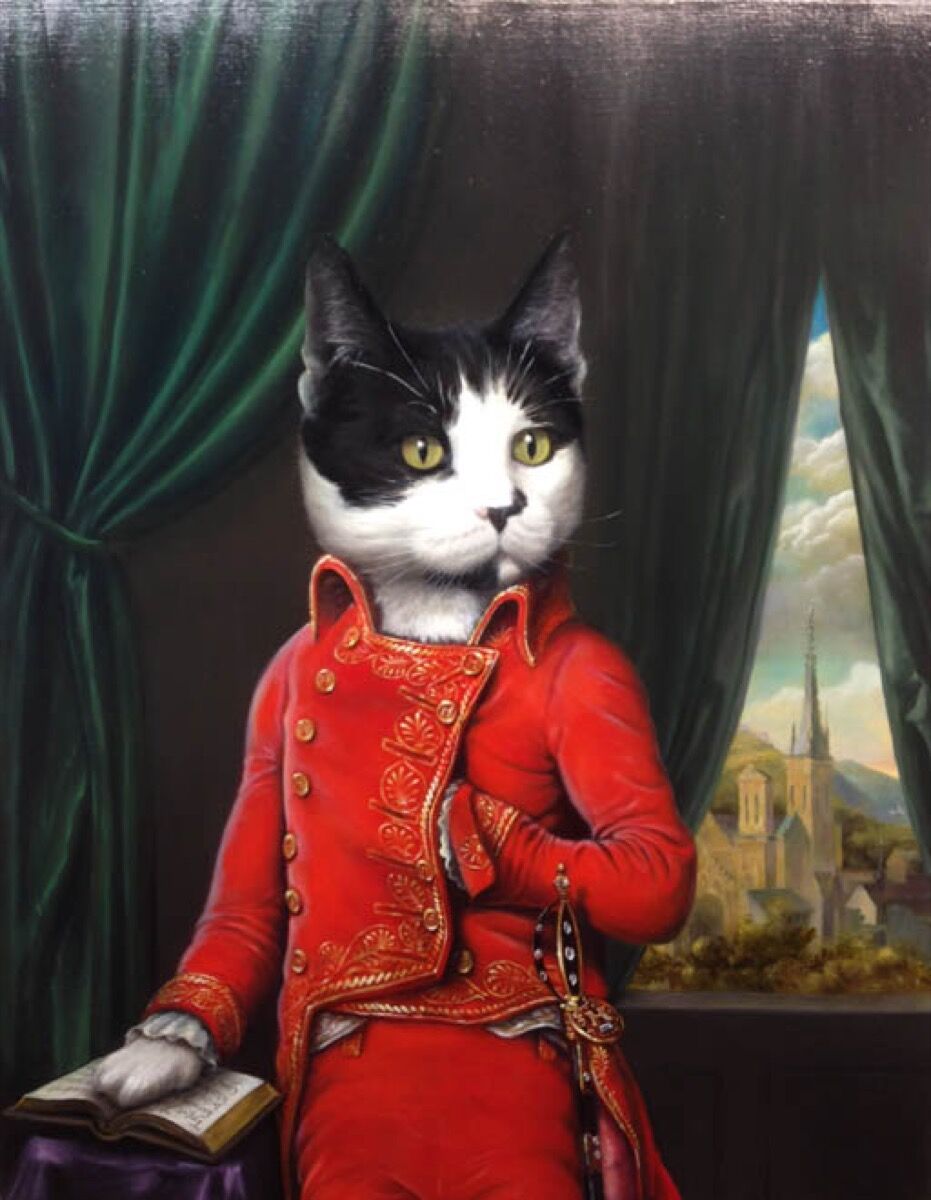 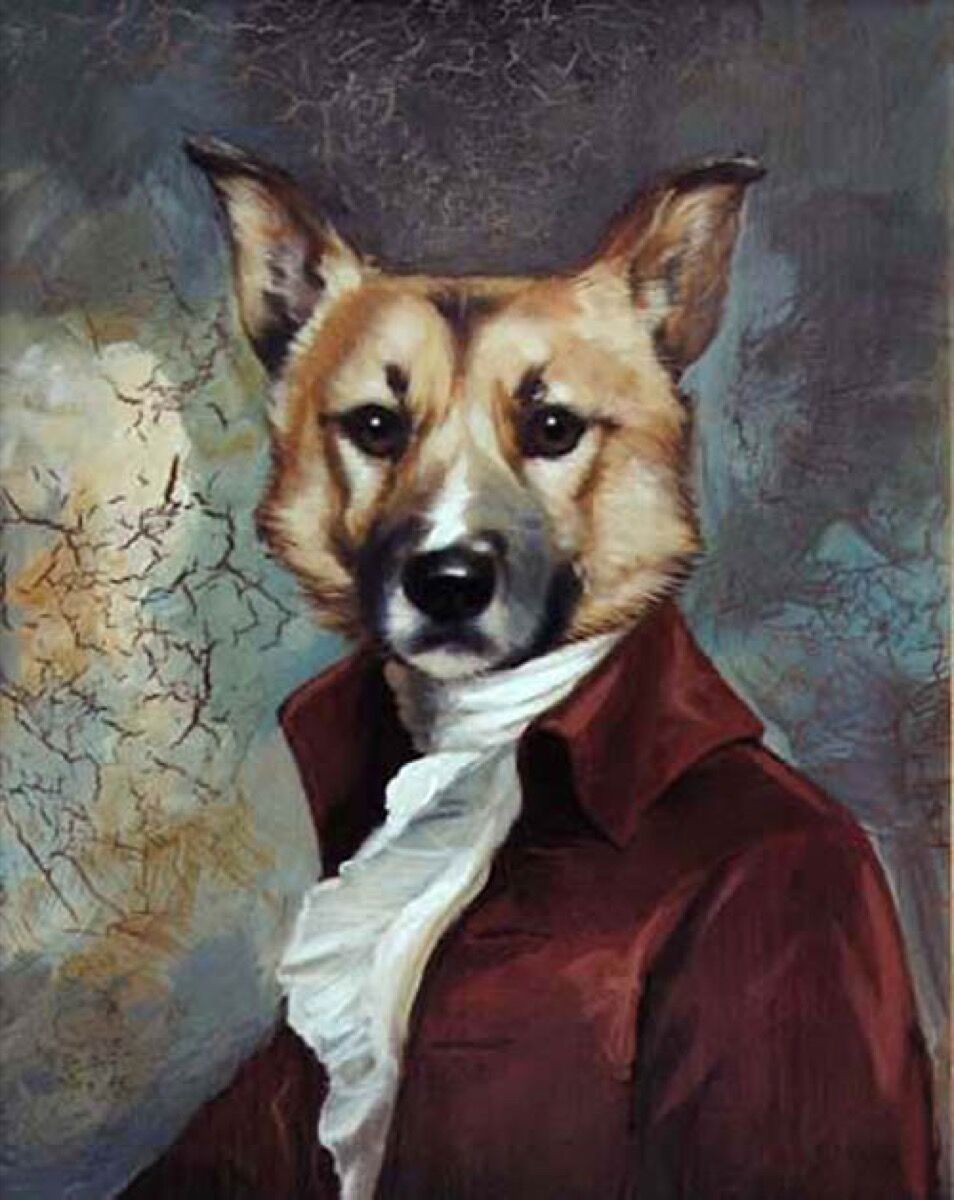 I’ve always thought that the Spanish word for pets, mascotas, hints at the unique position that animal companions hold in our lives. The cats and dogs we share our homes with become amicable avatars, unable to speak for themselves, yet somehow representing our all-too-human hopes and dreams.
Pets have their own psychiatrists, massage regimens, and cemeteries, so it’s no surprise that there’s a burgeoning business around animal portraiture. And while the internet is ripe with clichéd or predictable opportunities to immortalize your four-legged friends, a number of contemporary artists are expanding the possibilities of what pet portraiture can be, with occasionally surreal outcomes.
On the
minimalist
side of the spectrum, there’s Carter Kustera, who specializes in monochromatic silhouette portraits of pets. But those looking instead for extreme detail and
photorealism
might seek out the U.K.-based artist Paul Miller, whose Instagram account tracks various colored pencil commissions from conception through completion.
A former chef-turned-self-trained artist, Miller posts pictures of wildlife—snails, butterflies, prairie dogs—along with elegant, hyper-detailed portraits of pets. Working from photographs, his process is one of gentle empathy and care. “Almost finished the beautiful cat,” he writes, captioning an image of a noble tabby. “I restarted her as an error on my behalf unbalanced the drawing slightly.” 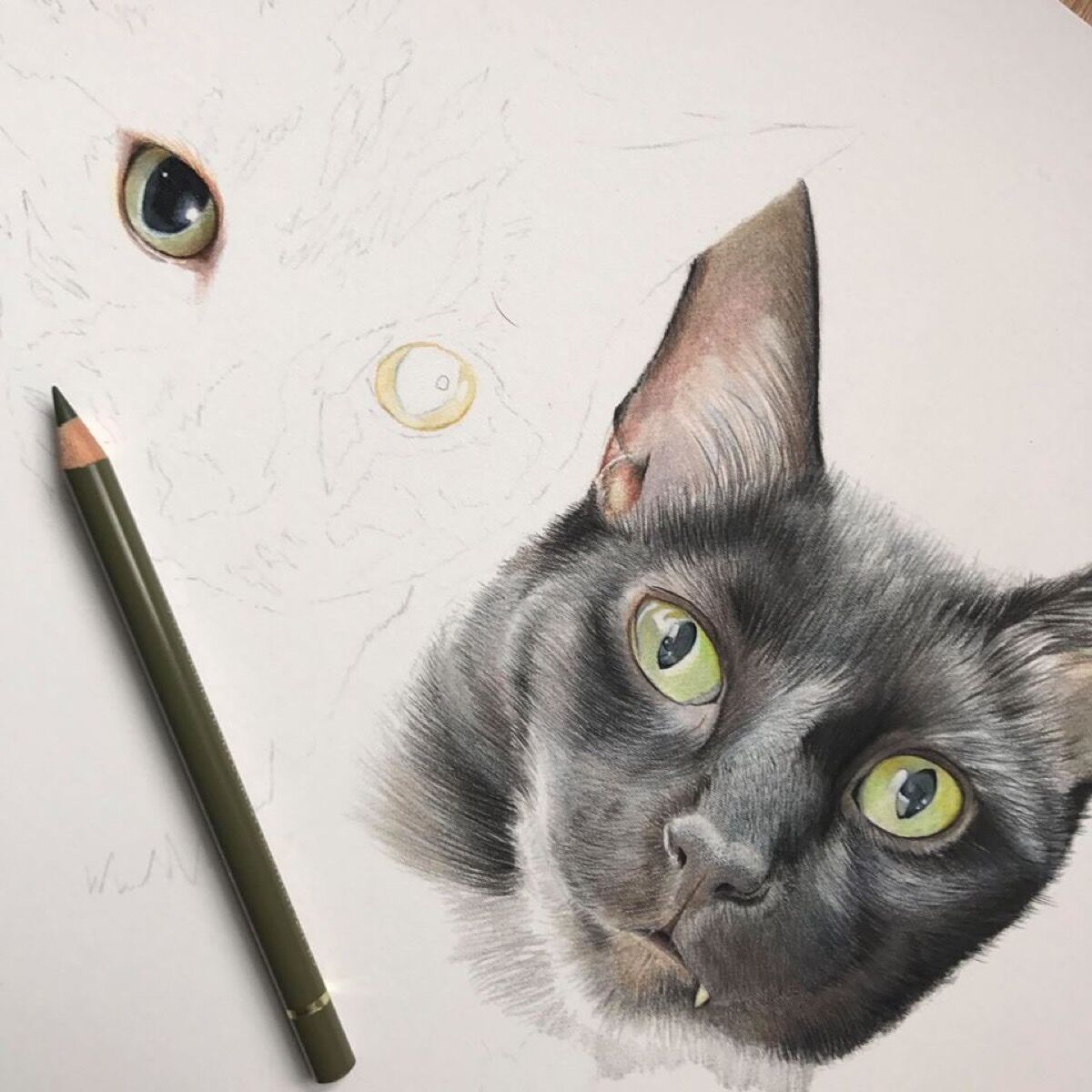 Image of Rugby and Miles in progress. Courtesy of the artist. 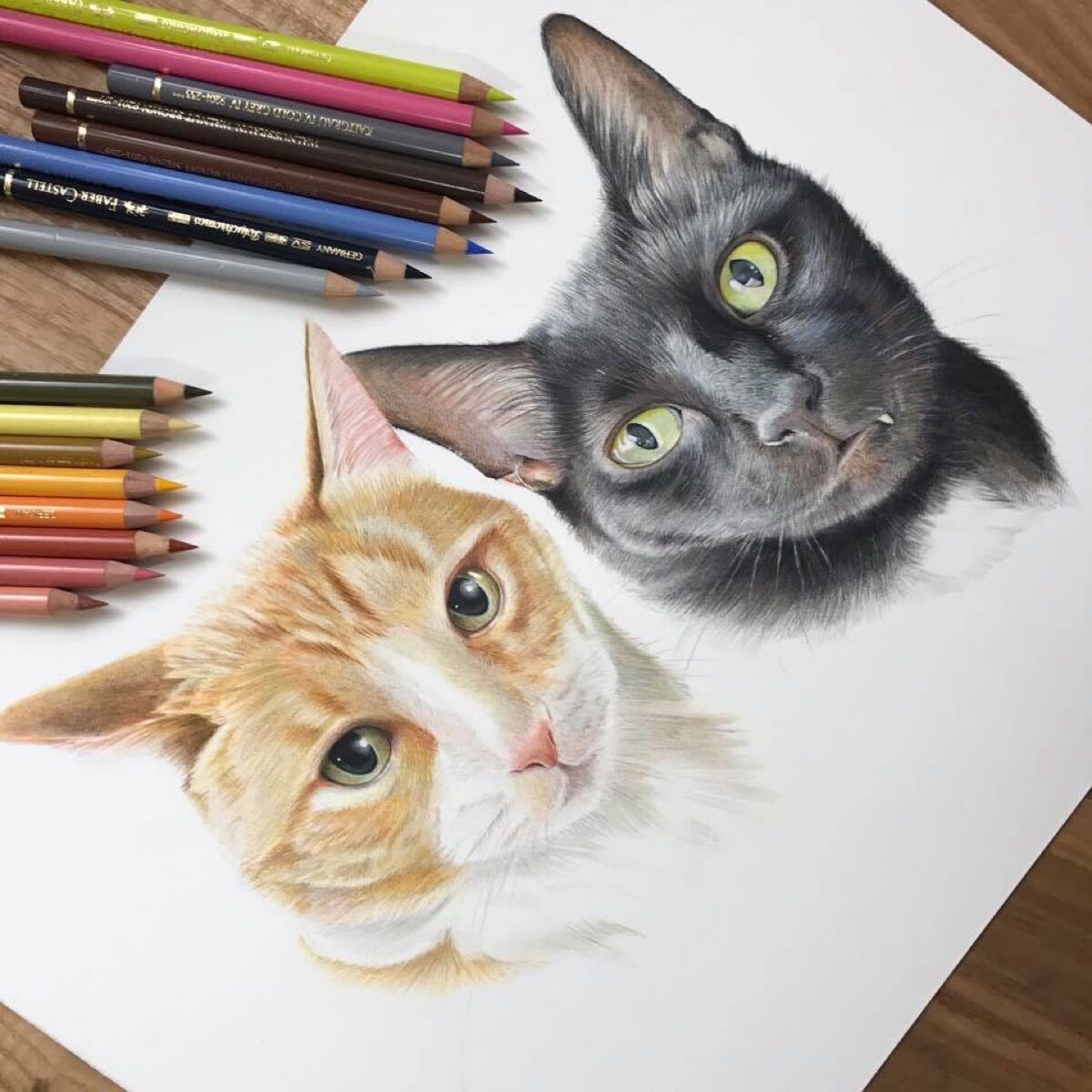 Paul Miller, Rugby and Miles, 2017. Courtesy of the artist.

Miller’s documentation of his work is both a record of his own progress and an inspiration for other fledgling animal portraitists, as he struggles with compositional challenges unique to the genre: “She has been lovely to draw, and a learning curve with the texture of the soft fur,” he writes of Juno, whom he dubs “the fluffiest dog in the universe.”
For those favoring more unconventional approaches to pet figuration, consider Walter Sutin, a contemporary artist whose wild pen-and-ink drawings capture dreamlike landscapes and a self-invented mythology. In a representative piece like 2015’s The Red Telephone, we witness two thong-wearing policeman mounting a bridge, while a skeleton in high-heeled boots reaches for a golden key. “My work traces my investigations into identity, history, eroticism, revolutionary movements, and the subconscious,” he tells me.
Like many artists with a sideline in pet portraiture, Sutin fell into the gig almost by accident. “One day I was walking a friend’s dog, a pitbull named Mavis,” he recalls. “I sat in Chicano Park in San Diego, underneath the murals there, and did a quick drawing of her.” He posted the drawing on Instagram, with a caption that said he was creating commissioned portraits, and the requests began rolling in. “Now I’m able to stay home from my job as a substitute teacher and draw from time to time,” he explains. 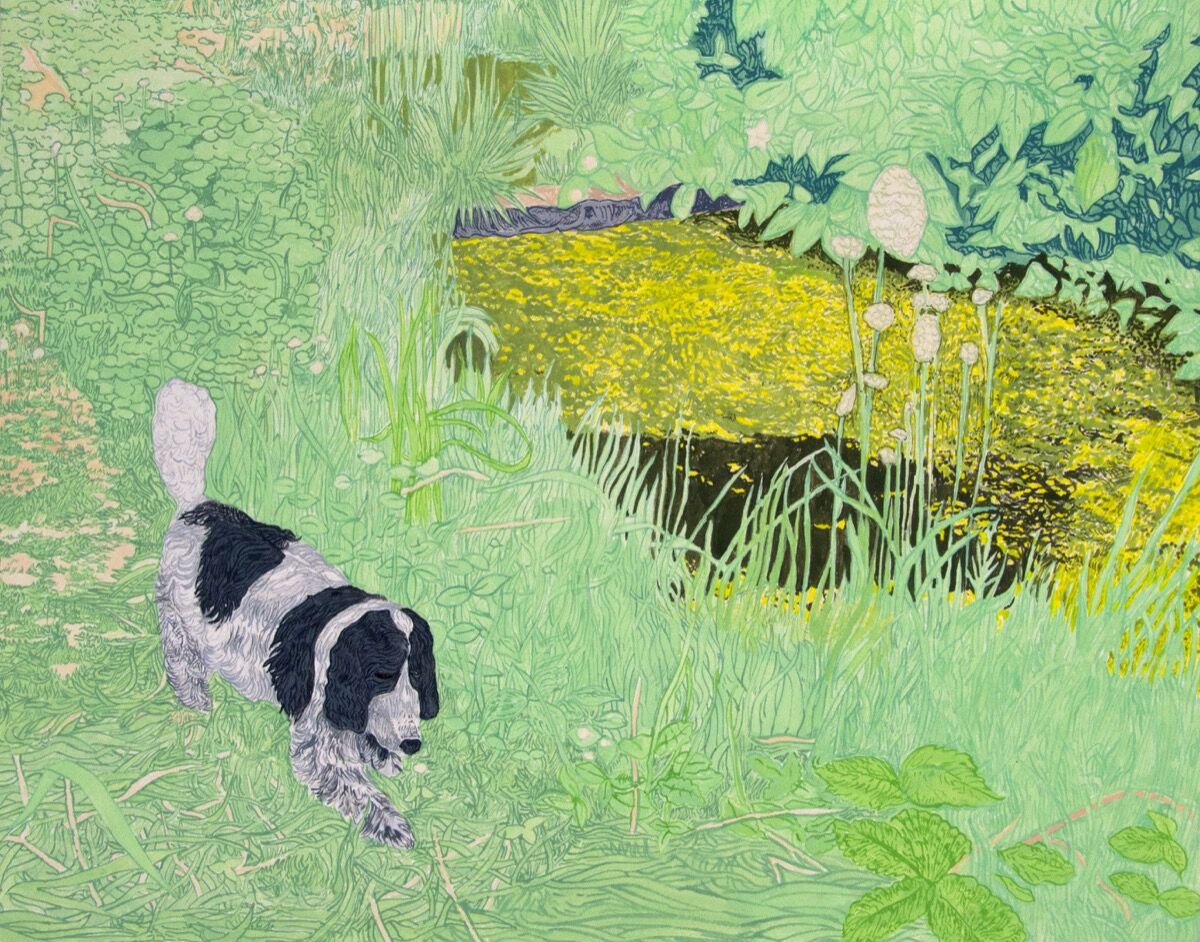 Advertisement
Sutin’s portraits capture the physical appearance of the animal, but also allude to each pet’s singular quirks. “Most of the paintings are made after long back-and-forth email threads involving hundreds of photos and video clips,” he explains. Beyond images, though, he asks for details like the animal’s interests, favorite places, or the history of their name, as well as the client’s interests. “These people have so much love for animals that it’s never hard to figure out what to do,” Sutin says. “It’s always been a collaborative process, but I would say I’m usually just taking orders.”
Often, the finished portraits are realistic—cats lounging in the woods, curled atop opened books, or reclining on the naked backs of their owners in bed. But for a portrait of “Bobby” from 2014, we see the feline subject with his eyes closed, dreaming of a sparse, bare Western desert. And Sutin’s clients are occasionally seeking visions far more transgressive than what the community on Etsy, a hotbed of pet-portraiture, might be used to.
“My next painting is going to be for a couple who asked that their fish be painted in an ‘extreme sexual situation,’” he says. “It will be of a woman in a big white hat and gloves urinating proudly on a fish which stares up into his urine-filled sky with gratitude and love.”
Sutin’s technique privileges the setting nearly as much as the animal subjects, which means that simple commissions can become more time-consuming than he originally anticipated (this loving focus on background detail is something he shares with New York pet-portraiture legend Mimi Vang Olsen). “Sometimes the environments people place their pets in are overwhelmingly beautiful and detailed,” he says, “and I can’t help but feel that I will die this way: I’ll die painting cats. I’ve lost myself in the texture of a bright blue wooden floor of a client in Mexico City. I’ve slaved over the foliage surrounding a couple’s pond in New Zealand. I’ve felt the disdainful gaze of a cat named for the fictional French noblewoman Raoule de Vénérande as I take undue liberties with her fur.” 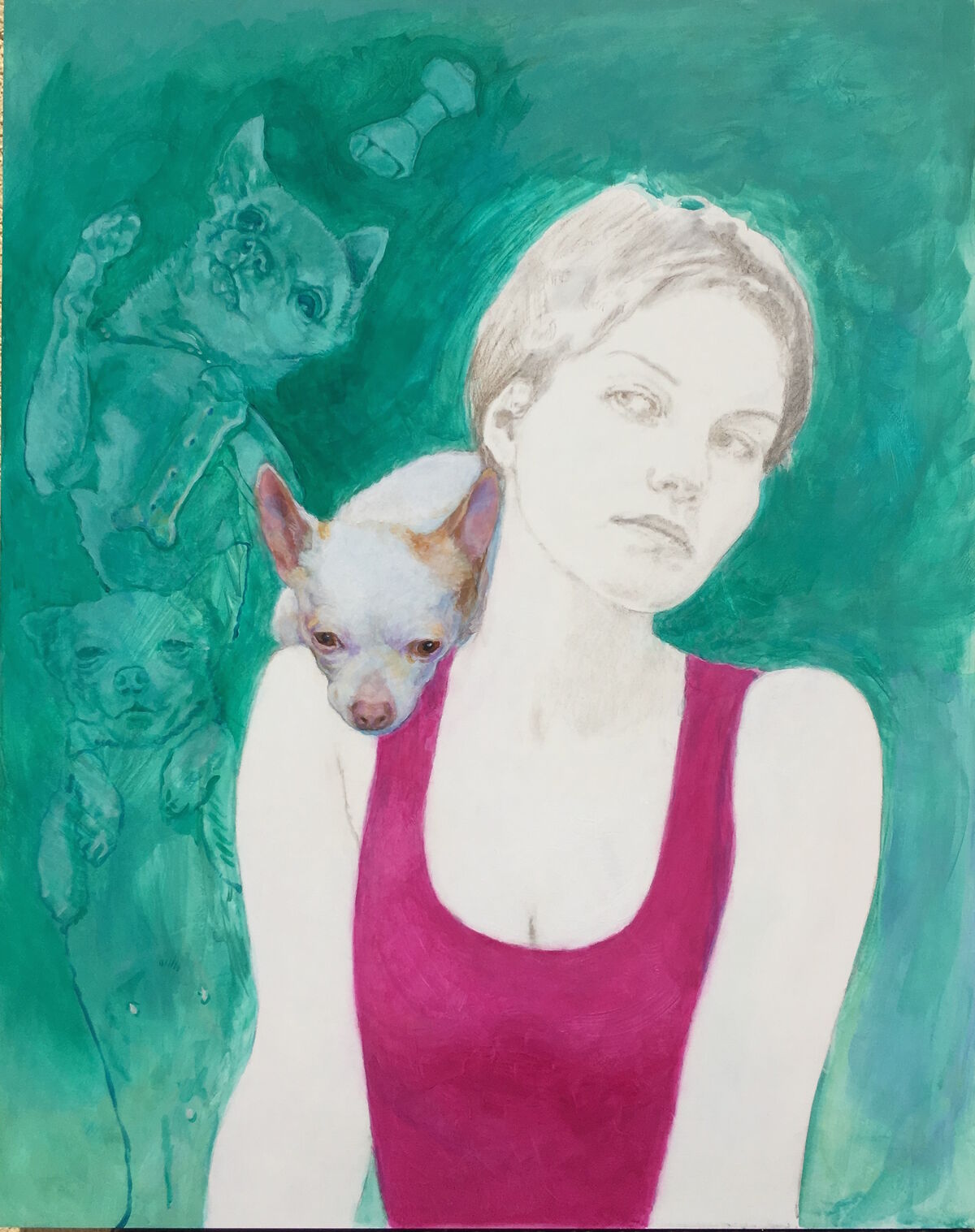 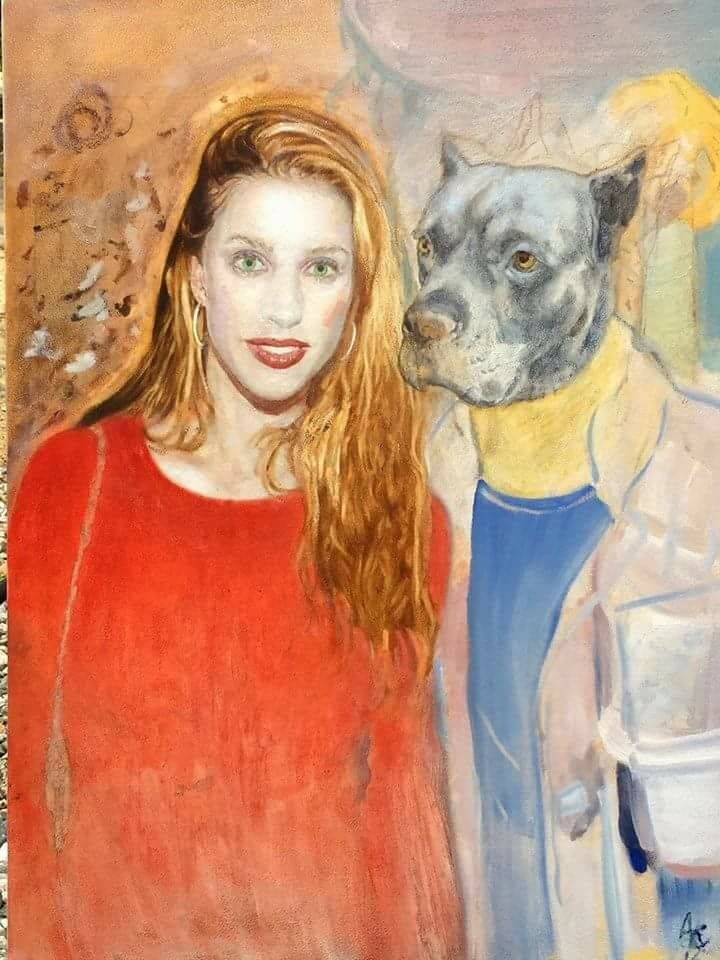 Alfredo Echeverria Ripstein, Beauty and the Beast, 2016. Courtesy of the artist.

Alfredo Echeverria, a Mexican artist based in Los Angeles, shares a similar desire to challenge the conventions of the genre. “I always prefer to take an approach steeped in imagination and magic realism if the customer is on the same page as me,” he says, noting that he finds potential commissions via social media, as well as by leaving flyers around town.
Echeverria’s involvement in the field also arose unexpectedly, while he was working on a portrait commission of a woman and her boyfriend. “I was beginning to depict the boyfriend when it became apparent that the composition had the saccharine quality of a Walmart studio photograph made for the holidays,” he recalls. “I remembered that this girl owned a magnificent monster of a dog and I suggested replacing the boyfriend’s head with that of the dog’s, after explaining to her that the painting was heading in a sentimental direction.” The boyfriend became a turtleneck-wearing dogfriend, à la the humanoid Weimaraners of
William Wegman
, and Echeverria found himself a fruitful new gig.
Max Siebel’s pet-portrait commissions likewise dabble with chimerical interventions that, depending on your point of view, are either adorable or disconcerting. His own believe-it-or-not genesis story involves a few dashes of absurd good luck. “When I was about 18, I painted our family’s Jack Russell Terrier’s head on my brother’s body,” he says. “It looked pretty ridiculous, and caught the eye of our then-neighbor, producer and writer Lorne Michaels. So my first commission was to paint Lorne’s cat, Steve. Soon after that, I painted the first of many portraits for actor Chevy Chase; the last one I did was of his dog dressed as Christopher Columbus.” 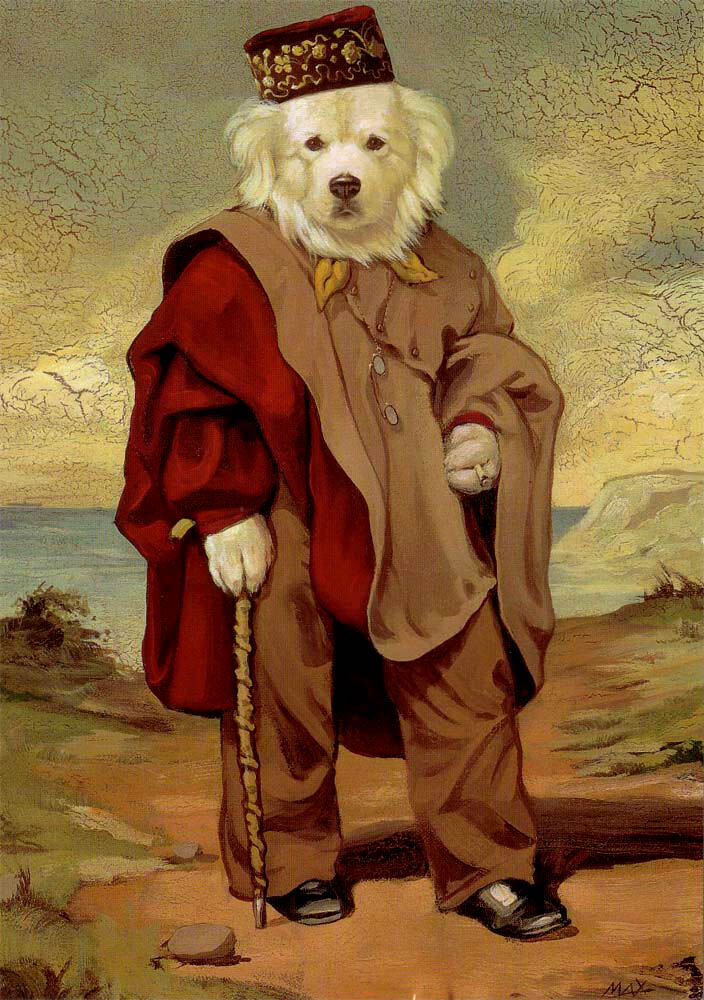 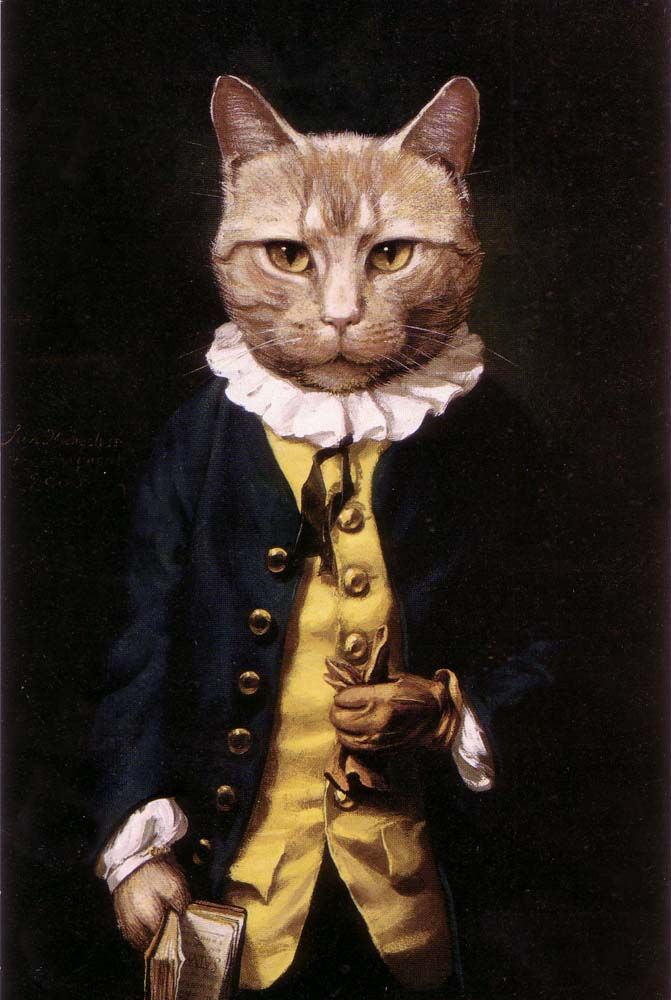 Siebel’s process combines an intuitive approach to his animal subject with allusions to art history. “Usually a client will give me a description of the pet’s personality, or I would be able to meet them in person,” he says. “Before Google, I would find old art books, and scour the public library for historical portraits that fit my idea of that pet’s character. The most challenging commission was of a cat named Henry. The client wanted me to use a famous portrait of Napoleon by
Jean-Auguste-Dominique Ingres
, and that took months of research and work.”
J. Penry, whose everyday artistic output involves irreverent images of Grace Jones and drug-addicted dolphins, became a pet portraitist through a popular one-time commission for Vice magazine. His evocative drawings and watercolors evince a particular talent for capturing an animal’s pelt. “Painting and drawing hair and fur has always been relaxing and therapeutic for me,” he says. “The real hard part is getting the eyes. It’s all in the eyes! Once you’ve nailed those you can steer the ship home, no problem.”
Like most pet portraitists, Penry’s relationship with his clients is full of back-and-forth dialogue. “They’re pretty specific about what they want,” he says. “If their Brussels Griffon looks like Chewbacca, then by God he better have a space-utility belt on. Lots of time, they just want their pets in a bow-tie or a Superman costume. Others will want their poodle to embody a ’40s-era film-noir actress—or to paint their Norwegian Forest cat as a ’70s porn star. This is a judgment-free zone.” 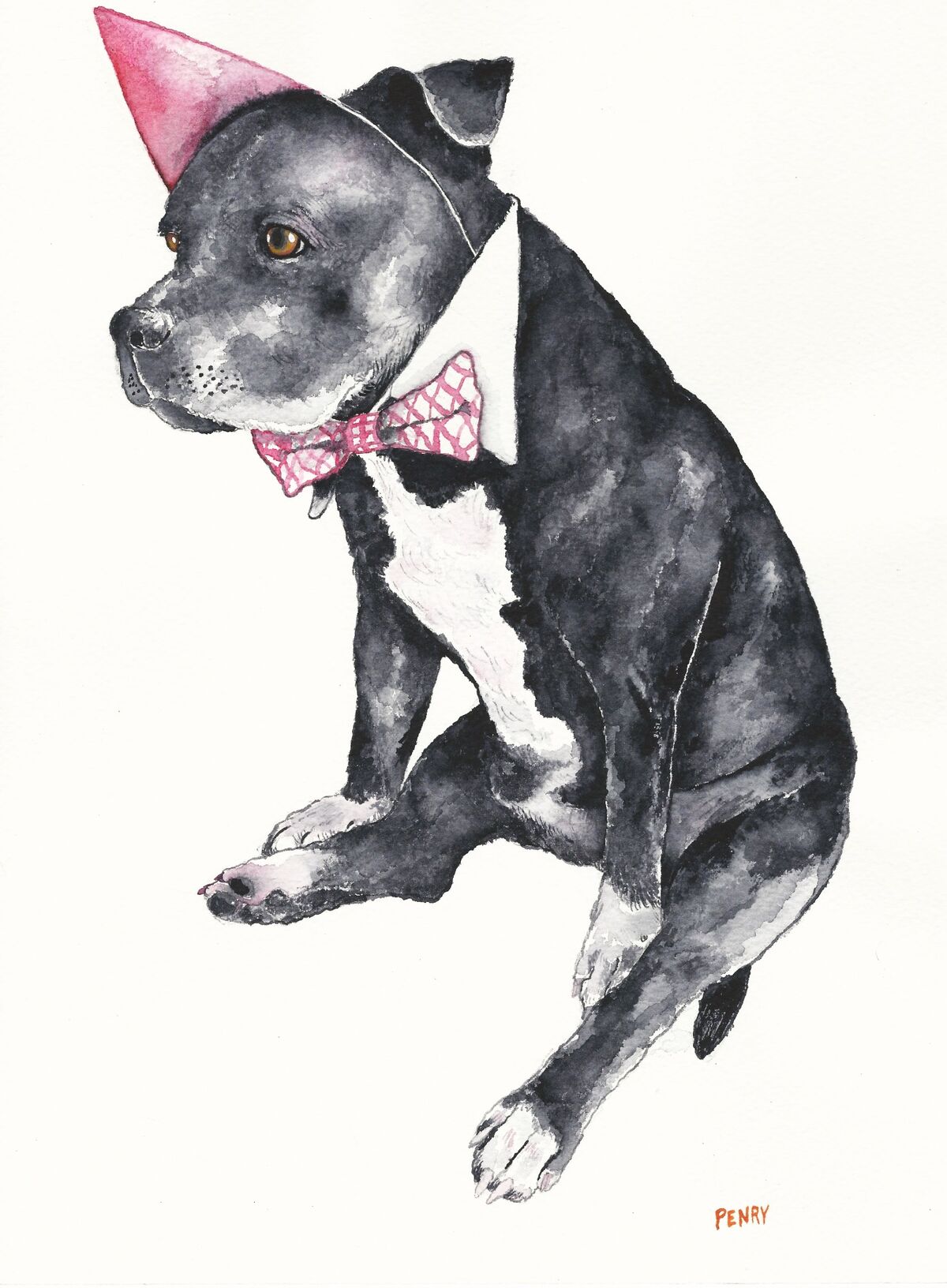 If that’s not weird enough for you, there’s Emma Stern, whose recent pet-portrait commissions are sci-fi psychosexual provocations. Stern’s typical studio output involves paintings that mimic the effects of digital animation. Recently, she was approached by a collector who wanted to memorialize her cat. “She wanted what she called her ‘spirit animal’s spirit animal,’ done in my particular style, which often involves animal-human hybrids,” Stern says. “This involved me scanning her cat, and then building a figure within the 3D software I use to make my compositions.”
The resulting painting depicts the cat’s head atop a nude woman’s body, her tail elegantly curved against a rainbow-splattered background. “The 3D scan was done over multiple attempts with fairly simple tech, using an iPhone app,” she explains. “It has some glitches, but I don’t mind the noise it picks up, as it adds some texture. The cat’s body is an open-source generic female downloaded from the Internet.”
If we consider pets as extensions of ourselves, the artistic desire to blend the human and the animal starts to make more sense. We want to know them better, to understand their secret hearts; under the right circumstances, we dream, they might speak to us. “I once shared a really inspiring moment with a cat,” Walter Sutin tells me. “I was listening to the song ‘New Aryans’ by Reagan Youth. It ends with the line, ‘Disorder now! NOW!,’ and when the music stopped, the cat said ‘Meow! MEOW!’ in perfect timing. It was like something out of the Lars Von Trier film Antichrist (2009). These are the moments from which true pet portraits are made.”
Looking to get in on the business yourself? A crash-course in the basics of portraiture for our most common pets can be found in two books by J.C. Amberlyn, both published by the Monacelli Press: How To Draw Dogs and Puppies (2017), and How To Draw Cats and Kittens (out in October).
“Study anatomy,” Amberlyn tells me. “Learn basic skeleton and muscle structure from living pets. Gently feel the muscle structure of their bodies and observe how those bones and muscles move, bend, and create bulges or hollows under their fur. With pets, you have a unique opportunity to study this kind of thing up close.”

J.C. Amberlyn. Courtesy of the artist.

At the same time, forget what you think you already know. “Artists may have preconceptions of what a dog’s or cat’s muzzle looks like from watching cartoons and seeing other stylized images in popular culture. It’s important to place preconceptions aside.”
“Don’t be afraid of making mistakes,” Amberlyn adds. “It’s all part of learning, growing, and getting better.”
And even if you flub the tuft of your kitten’s ears, or the curve of your Corgi’s back, remember the silver lining: “The animal won’t criticize the portrait.”
Scott Indrisek
Related Stories