Inside the World’s Largest Collection of Tiffany Glass Lamps 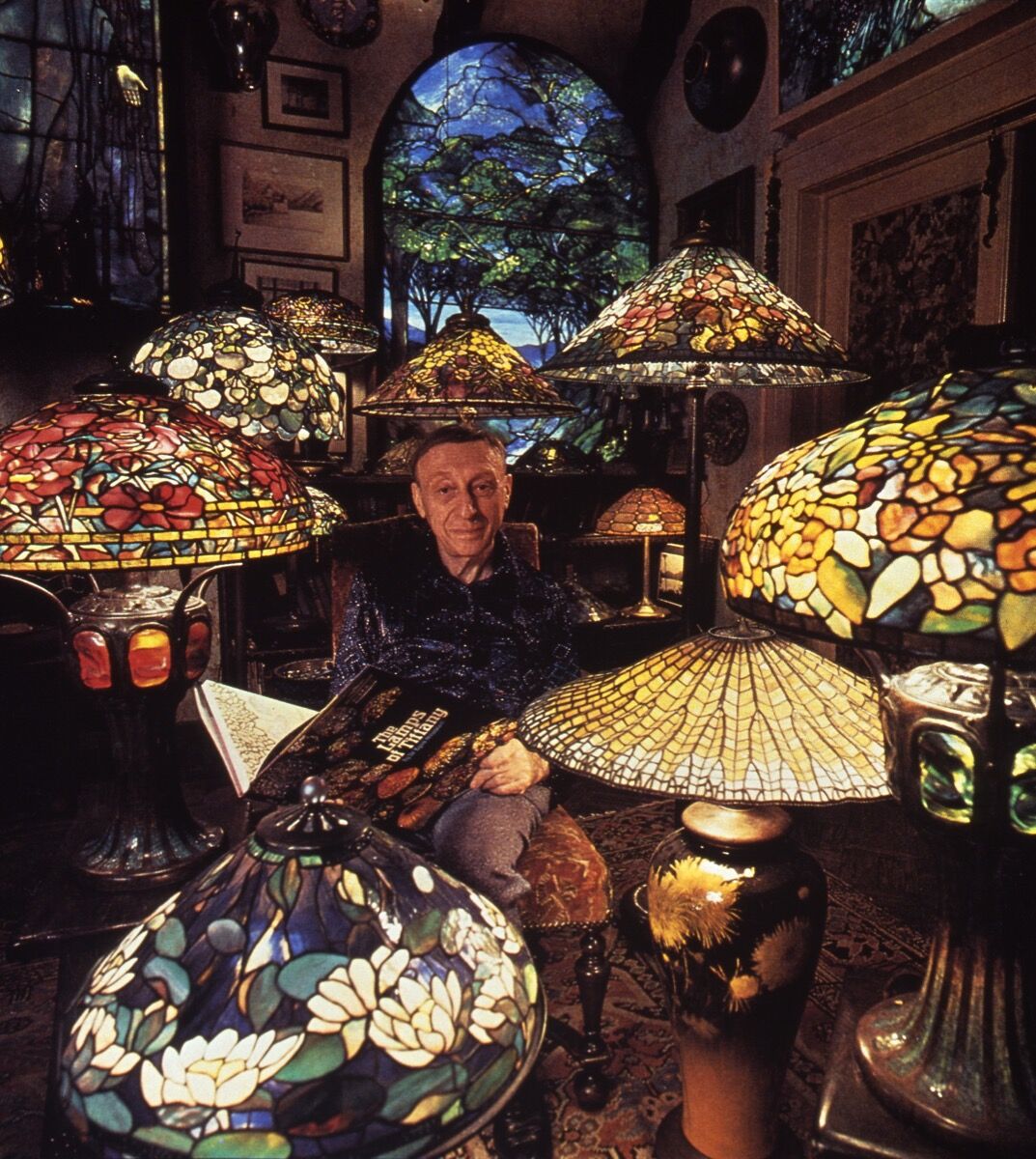 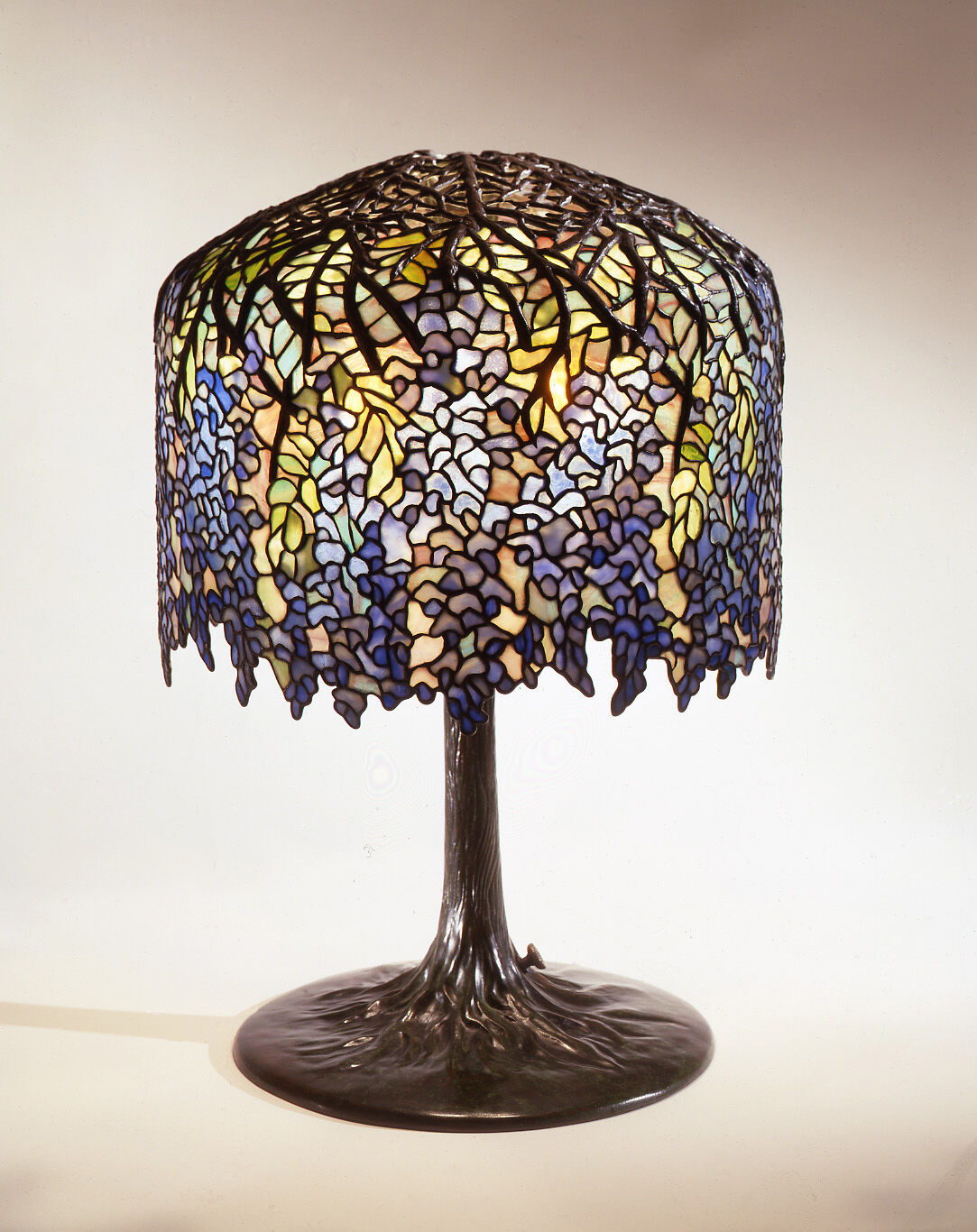 In 1935, Egon Neustadt was measuring a dining room table that he wanted to buy in an antique furniture shop in Greenwich Village. His wife Hildegard, however, had set her sights on a distinct lamp nearby, its stained-glass shade a dome of luminous daffodils. The couple, both Austrian immigrants, were in the midst of furnishing their first home, in Queens, and only had money for the table that day. But weeks later, at Hildegard’s urging, they returned to buy the “strange, old-fashioned lamp,” as Neustadt described it in his memoir. The seller told them it was was the work of the late great American glass artist
Louis Comfort Tiffany
. It cost $12.50 at the time (the equivalent of roughly $225 today).
That single purchase was the beginning of a long journey, as over the following five decades Neustadt would amass the largest known collection of Tiffany stained-glass lamps. He would later add leaded-glass windows and bronze desk sets to the collection, and in 1967, he bought an enormous cache of over a quarter million pieces of Tiffany glass—from full sheets to tiny tiles to pressed-glass jewels, in almost every color imaginable. He formally established his own private museum, the Neustadt Collection of Tiffany Glass, in 1969.
Today, choice parcels of Neustadt’s collection can be seen in a dedicated gallery at the Queens Museum and at the New York Historical Society (to which Neustadt gifted 132 lamps in 1983). Additionally, curator Lindsy R. Parrott and conservator Susan Tomlin, who helm the Neustadt Collection today, organize traveling exhibitions across the country and collaborations with major institutions, like the Corning Museum of Glass. They also oversee the treasure trove of glass pieces, which is tucked away in their headquarters in a former industrial warehouse in Long Island City—not far from where the collection began. Installation view of “A Passion for Tiffany Glass,” in the The Neustadt Gallery at the Queens Museum.

“As an organization, we have this longstanding connection with Queens,” Parrott tells me as we sit within the Long Island City headquarters of the Neustadt, at arm’s reach from rows of wooden cubbies brimming with thick, gleaming slabs of glass in cobalt blues, seafoam greens, and vivid oranges. (The Long Island City warehouse is only accessible on rare occasions, through private tours, though they help organize touring exhibitions.)
Indeed, it was in Corona, Queens, that Tiffany built his legendary glass furnaces and studios, where he employed hundreds of artists and designers to shape and realize his works. There, he guided a team that perfected the design and manufacture of opalescent glass and stained-glass lamps, windows, mosaics, and other
Art Nouveau
objects. With ambition and family money (his father famously founded
Tiffany & Co.
), Tiffany revolutionized the glassmaking industry with his unprecedented use of color in glass and impeccable craftsmanship. But he died in 1933 and, four years later, the business shuttered. In the aftermath of World War I and the 1929 stock market crash, a taste for fine Art Nouveau was no longer feasible for most Americans.
“Dr. Neustadt got into collecting Tiffany’s works when the getting was good,” Parrott explains. “Modernism was the reigning aesthetic; all of these extravagant, expensive luxury objects just didn’t make sense for most people any longer.”
But it did make sense for Neustadt, who was keen to adopt and embrace American culture. In his memoir, he wrote that he was persuaded to buy the daffodil lamp after hearing that it was made by an American artist. “It was kind of an act of patriotism to purchase this lamp,” Parrott explains. 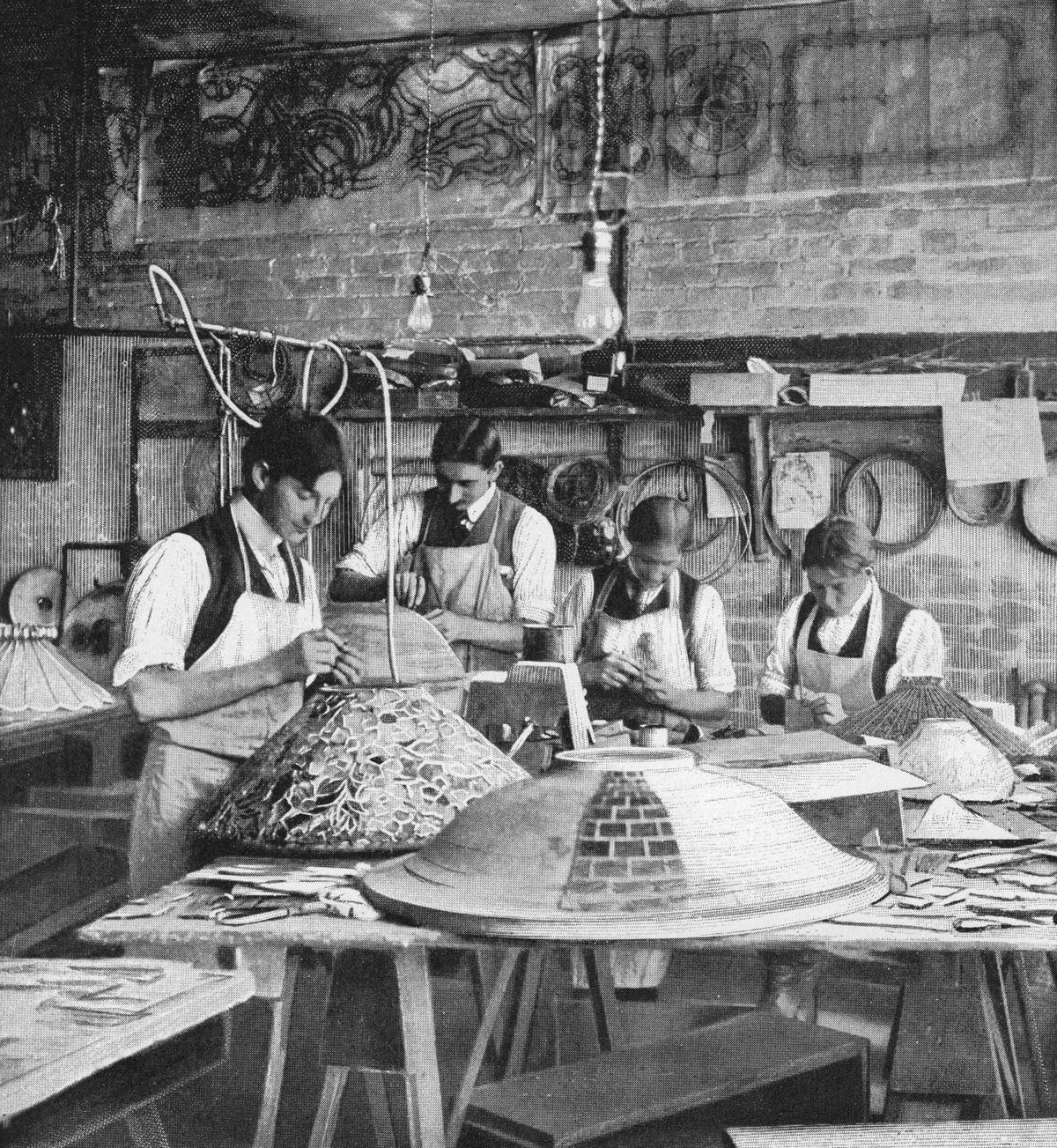 An array of glass jewels used by the Tiffany Studios. Courtesy of the Neustadt Collection of Tiffany Glass, Queens, New York.

Advertisement
After World War I, Neustadt felt that Austria was too restrictive and moved to the United States. He reputedly arrived with $10 in his pocket, got a job at Macy’s in the ladies’ slippers department, and quickly began networking. With his medical training in dentistry from the University of Vienna, he secured a job teaching at NYU’s dental school and went on to give lectures across the country at dental and orthodontic conferences, eventually setting up his own orthodontic practice on the Upper East Side. Simultaneously, he became a real estate developer; around 1945, he purchased some 400 acres of land in Connecticut and built up property there that he sold off in lots.
“It’s a classic story of the American dream,” Parrott offers. “He wrote about how he and his wife only spoke English at home. They were decorating their house in the colonial revival style, and and he anglicized his name, he pronounced it ‘new-stat.’ And there’s this very patriotic streak that runs throughout the formation of the collection.”
Once he caught the Tiffany bug, Neustadt and his wife would seek out the lamps in secondhand shops and tag sales—and eventually at antique stores, after they rose to prominence in the U.S. He owned more than 350 lamps in total, and had dozens of them installed somewhat bizarrely in his townhouse on East 62nd Street, which was open by appointment. After Hildegard died in 1961, he continued to collect for decades, until his own death in 1984, at the age of 86.
“He was always keeping his eye out for these lamps when very few people cared about them,” Parrott explains. The first major public Tiffany exhibition since Louis’s death didn’t take place until the late ’50s, at the Museum of Contemporary Crafts in New York (now the Museum of Arts and Design), which positioned him as an important artist and craftsperson. The revival of interest in Tiffany was just beginning to build in the ’60s, Parrot notes, when Neustadt purchased 500 cardboard boxes packed with the now-legendary glass. “To have the foresight to buy that and to recognize its historical value showed incredible collecting foresight,” she adds. 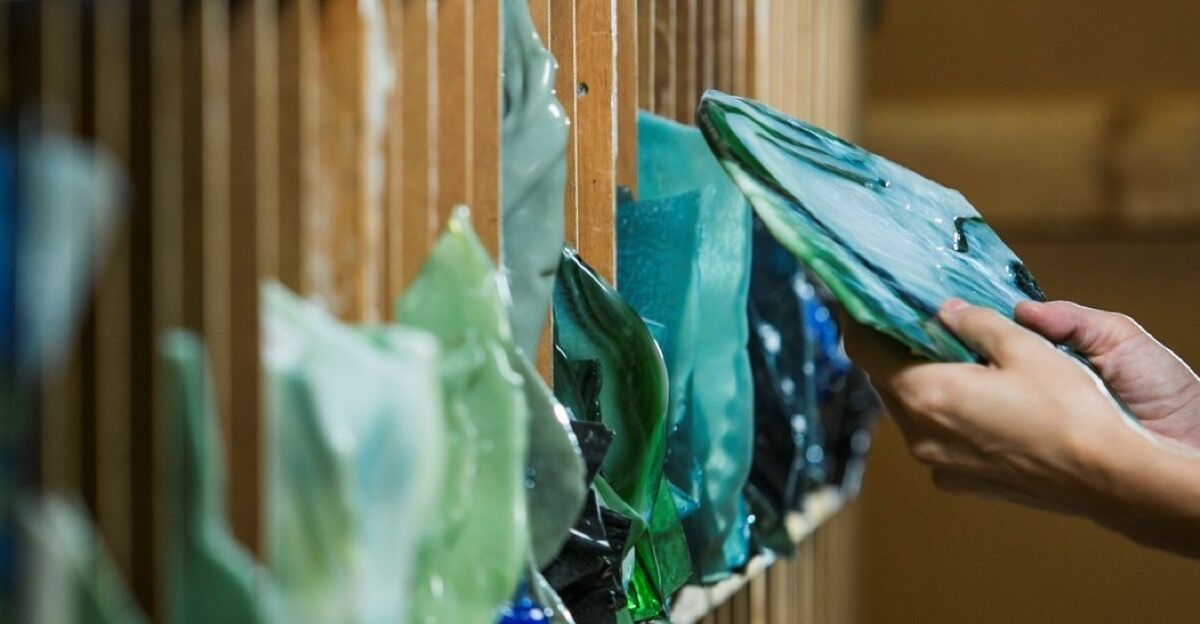 “He was able to not only amass a huge number of lamps,” Parrott adds, “but his collection is renowned because there are so many totally fabulous, very rare examples.” She alludes to pieces like a globe-shaped shade in a Pond Lily design (one of only two known to exist), and a one-of-a-kind hanging Dragonfly shade, likely made as a special commission. “He was able to collect at a time when the Tiffany lamp world was his oyster,” she muses.
As Neustadt built his collection, he took a scholarly approach to the lamps, culminating in a 1970 book, The Lamps of Tiffany. “Dr. Neustadt had this really tidy, scientific mind, and the way he understood the world was by classifying things,” Parrott explains. While it’s not known how many different types of different Tiffany lamps were made, let alone how many were made in total, Neustadt played an important role in trying to codify the various designs. “He developed terms for different types of lamps—like ‘geometric’ or ‘geometric transitioning to floral’—and he was trying to categorize and develop this nomenclature for the lamps and for the glass as well.”
A special part of the collection—not currently on display, though likely the subject of a future show—is made up of Tiffany forgeries, which it’s believed that Neustadt bought inadvertently, likely at the end of his life. By then his collection had become better known, and his instincts may have faded.
“Some of the forgeries are magnificent, and you can see why he’d be fooled,” Parrott explains. “In some cases the work is really good, the craftsmanship is competitive with what Tiffany did—but the glass, however, is not.” Tomlin adds. “It’s a very fine line between colorful, sophisticated, and just garish.”
As we walk through shelves of glass and pore over shards, full sheets as large as two feet long, and bins of glass bits, Tomlin describes what an enormous, painstaking process it’s been to examine, document, and categorize each piece of glass, and build an archive of the materials. There’s never just a single green glass, she notes, rather something like 47 variations on green. “No two pieces of Tiffany glass are the same. So, within a sheet of glass, you could have one end of the sheet that is perfectly clear and light yellow, and then as it goes down it’ll get heavier and mottles to almost a flaming red-orange. Describing that is hard.” 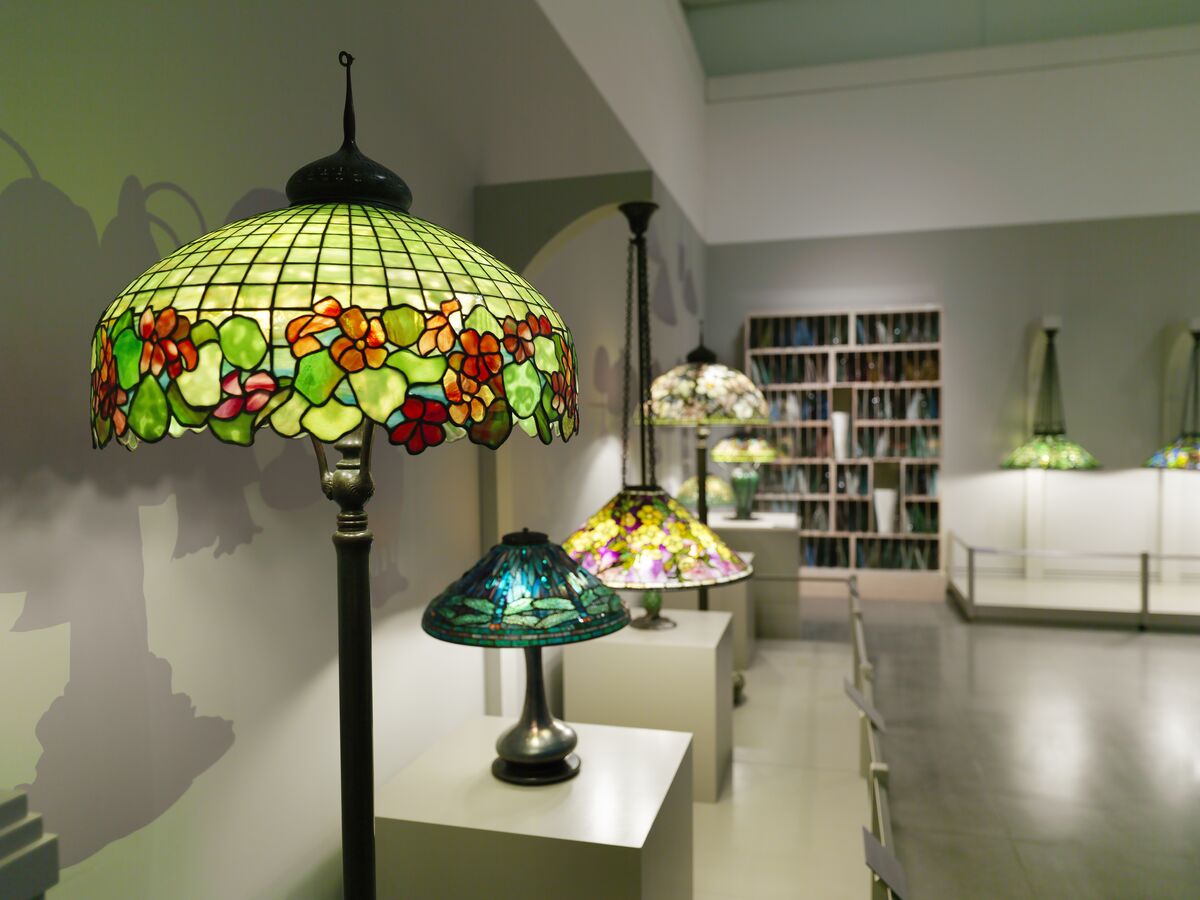 Installation view of “A Passion for Tiffany Glass,” in the The Neustadt Gallery at the Queens Museum.

The collection has developed a system to give the various hues distinct shelves, numbers, labels, and entries in an online database. The primary focus to date has been drapery glass, 90 percent of which has been documented and archived. Drapery glass is the sculptural, textured sheets that were used often within Tiffany’s mosaics, to depict things like bird feathers (a sub-genre is called “feathered glass,” used for the wings of birds and angels) or gowns and robes.
“If you worked at the Tiffany studios and you were a glass selector, you would approach shelves of glass very much like these,” Parrott says. “You would have to find the right color and hue or shade of that color, and then you would have to find the right piece of glass within a huge full sheet.”
Neustadt’s glass collection has also been an important resource in helping to elucidate the process through which Tiffany’s lamps were made. In addition to conserving and restoring works and overseeing the glass archive, Tomlin, who’s been working in this field for 50 years, has created lampshade models, made with modern materials and included in The Neustadt’s traveling exhibitions, to educate the public about the artistry and techniques that Tiffany used.
“This is one of the reasons that Tiffany’s lamps were so expensive—it wasn’t just the materials, it was the labor,” Parrott explains, while Tomlin carefully scores a piece of greenish glass to illustrate the difficult process of cutting it. By engaging in the process themselves, “you know how a piece of glass is cut, but you also know how it can go desperately wrong, and you get a sense what the frustrations are too.”
“Understanding what goes into making these finished objects, not just walking past them as though they’re paintings, is something that we’re deeply committed to,” Parrot continues. “So although our organization is small, it’s a really rich and innovative way to look at this material, and make these objects come alive.”

A previous version of this article incorrectly stated that Louis Comfort Tiffany’s uncle was the founder of Tiffany & Co. His father founded the company.
Casey Lesser is Artsy’s Lead Editor, Contemporary Art and Creativity.
Related Stories