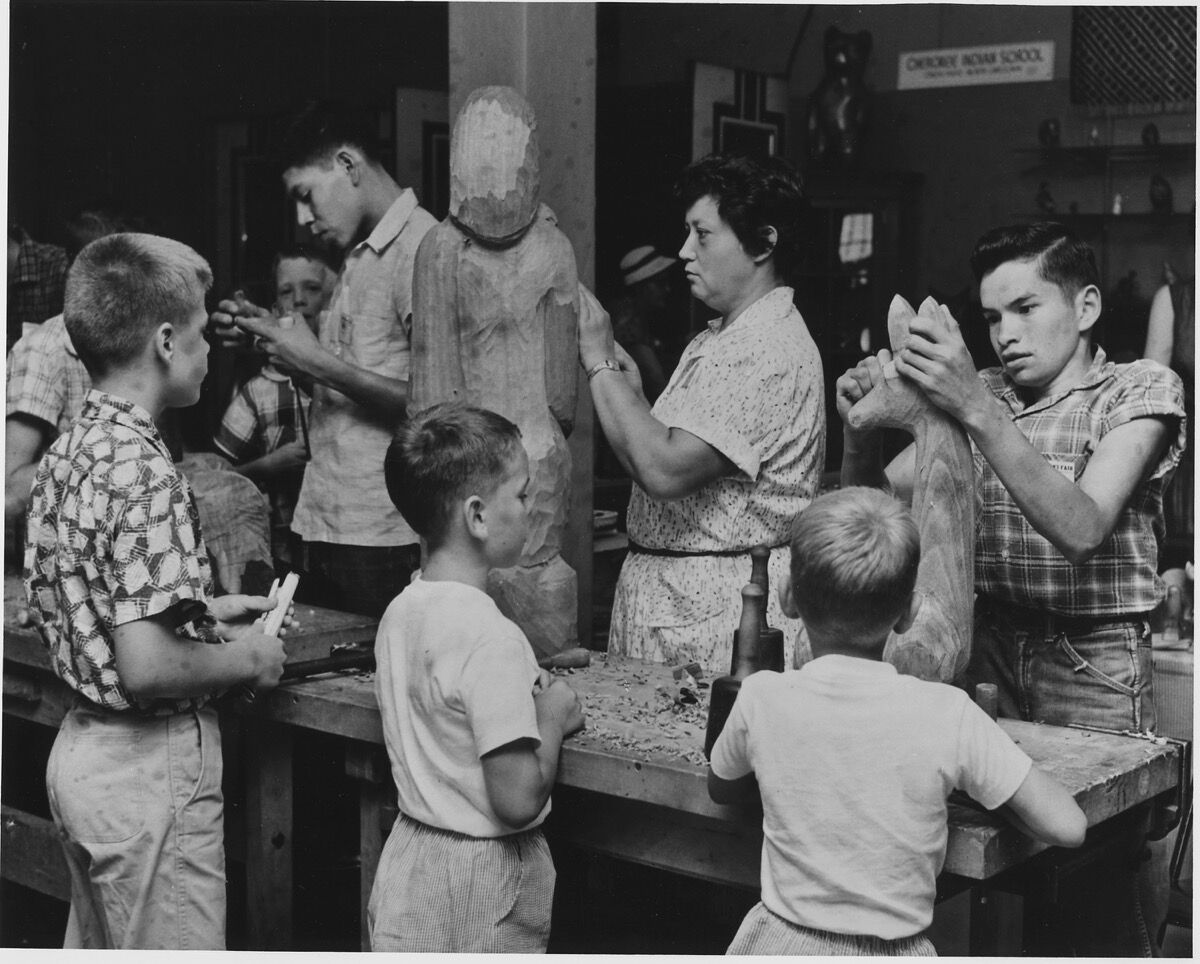 Visitors to the Craftsmen's Fair at the Cherokee Indian Reservation, Cherokee North Carolina, watch Amanda Crowe, well-known Cherokee wood sculptor and her students demonstrate their art. Courtesy of the National Archives and Records Administration, via Wikimedia.

Black bear sightings aren’t rare in North Carolina’s sweeping Great Smoky Mountains. Coated thick with spruce trees and the “smoky” morning fog that gave the range its name, these lands house the densest population of the burly, ebony-coated animals.
Perhaps that’s why Cherokee artist Amanda Crowe preferred carving bears over any other form. She’d been surrounded by them—and the lore of her Cherokee ancestors—since she was young. In Cherokee mythology, bears are revered as both the “captain of the animals” and a hard-won, abundant source of sustenance. For Crowe, they were also prudent, mischievous, and playful—qualities that could easily describe the artist herself. “They’re almost human,” she told Janice Gaston of her animal muses, in a 1988 interview for the Winston-Salem Journal. “They’ve got more sense than a lot of people.”
Crowe’s most recognizable sculptures, which she made between the 1950s and her death in 2004, reflect her affinity for fauna. For over 50 years, she whittled and smoothed blocks of wood into squirrels, quails, bulls, and acrobatic bears, imbuing them all with personality. But as much as she loved animals, Crowe also made art as a means to connect with people—and preserve her Cherokee community’s carving traditions in the process.
Crowe’s connection with her native lands and its inhabitants ran deep. She was born in 1928 in the town of Cherokee, North Carolina, located at the heart of the Qualla Boundary Land Trust, a roughly 56,000-acre plot abutting the Great Smoky Mountains National Park. The trust is home to the Eastern Band of Cherokee Indians, a tribe descended from a group of some 800 Cherokees who uniquely remained in their ancestral homeland, even when the American government forced most Cherokee people to relocate West, via the Trail of Tears, in the 1830s and ’40s. 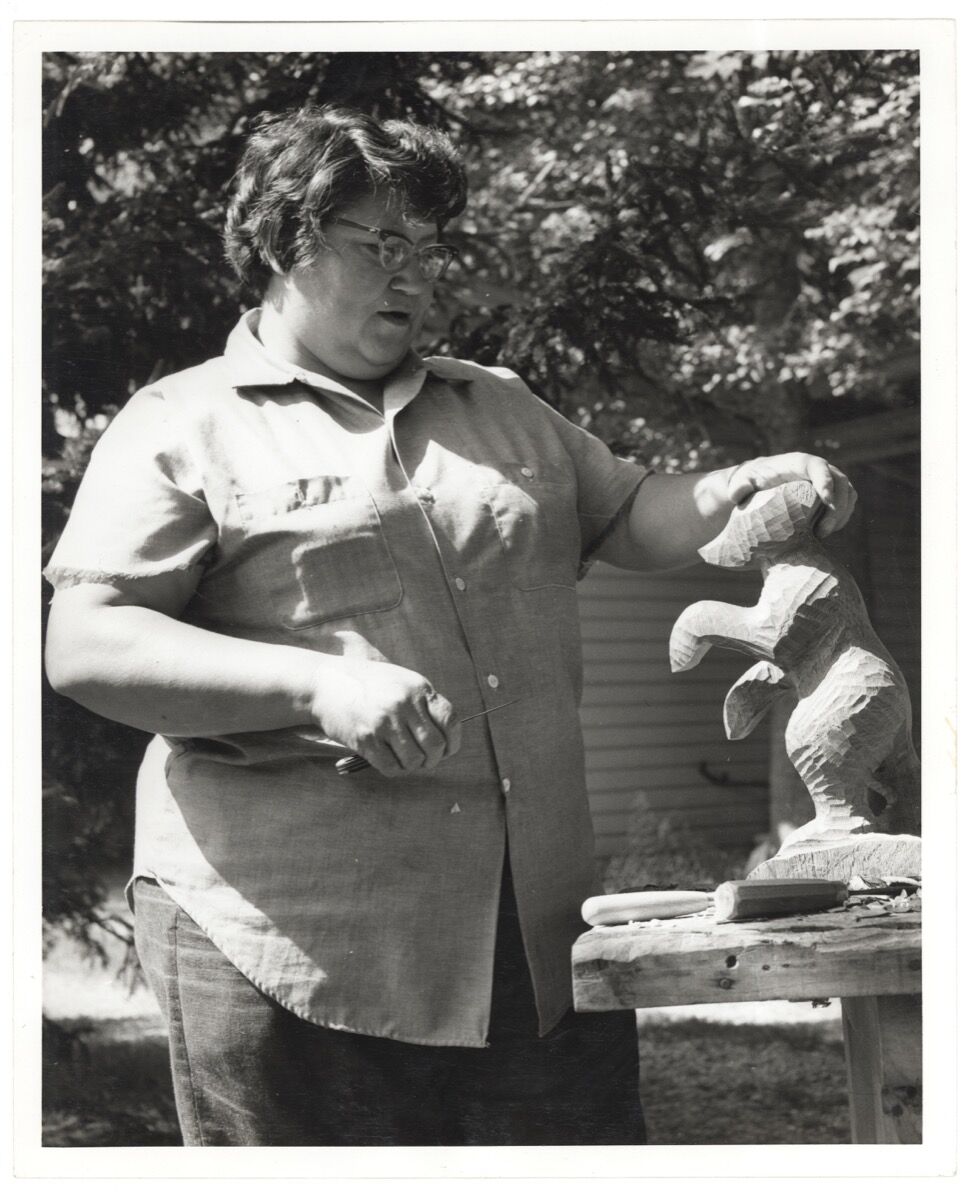 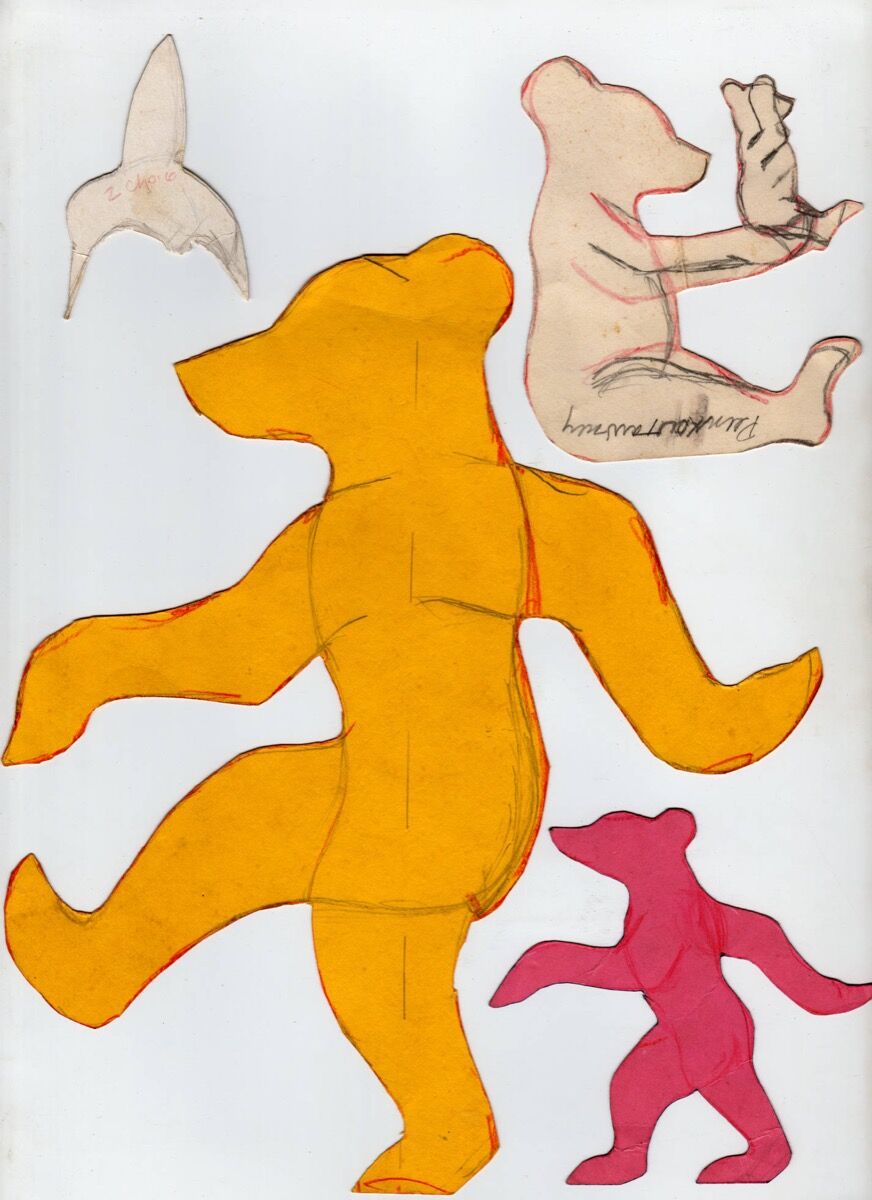 Crowe’s father, who was Cherokee, and mother, who was Anglo, raised their daughter in the Qualla Boundary; she attended the Cherokee Indian School for five years, beginning around age six. But even before she began her formal education, she picked up carving at the tender age of four, and realized it was her calling. “I was barely big enough to handle a knife,” she later recalled, “but I knew what I wanted to do—I guess it was part of my heritage.”
The Cherokee people of what is now North Carolina had carved for thousands of years before Crowe came along, turning local woods like mahogany and wild cherry into utilitarian objects ranging from bowls, spoons, and pipes to canoes and sticks for stickball (the Cherokee sport that inspired lacrosse). Crowe grew up surrounded by these objects and even some of their makers, like her uncle, famed carver Goingback Chiltoskey.
Even when she started grade school, Crowe wouldn’t part with her carving tools—a fact well-remembered by at least one of her peers. “She carried a knife to school, and I was so scared of her,” remembered Betty Dupree, one of Crowe’s classmates, and later the general manager of Qualla Arts and Crafts Mutual. “Later on, I figured out she was carving even then.”
Crowe faced plenty of obstacles as a very-young aspiring woodcarver—not least of which was her gender. “When I first started carving, only men carved,” she told the Asheville Citizen-Times for a 1988 article (lovingly headlined “Wood Carver’s Many Talents Something to Crowe About”).
Anna Fariello, a curator who has devoted much of her career to documenting the work and legacy of Cherokee artists, noted that Cherokee arts have traditionally been divided down gender lines. “As far as basketry and pottery, it’s almost 100 percent something that women do, both traditionally and in the contemporary world,” Fariello explained, from her home in North Carolina. “On the flipside, carving was in the male sphere—except for Amanda Crowe, so she stands out for that reason.” 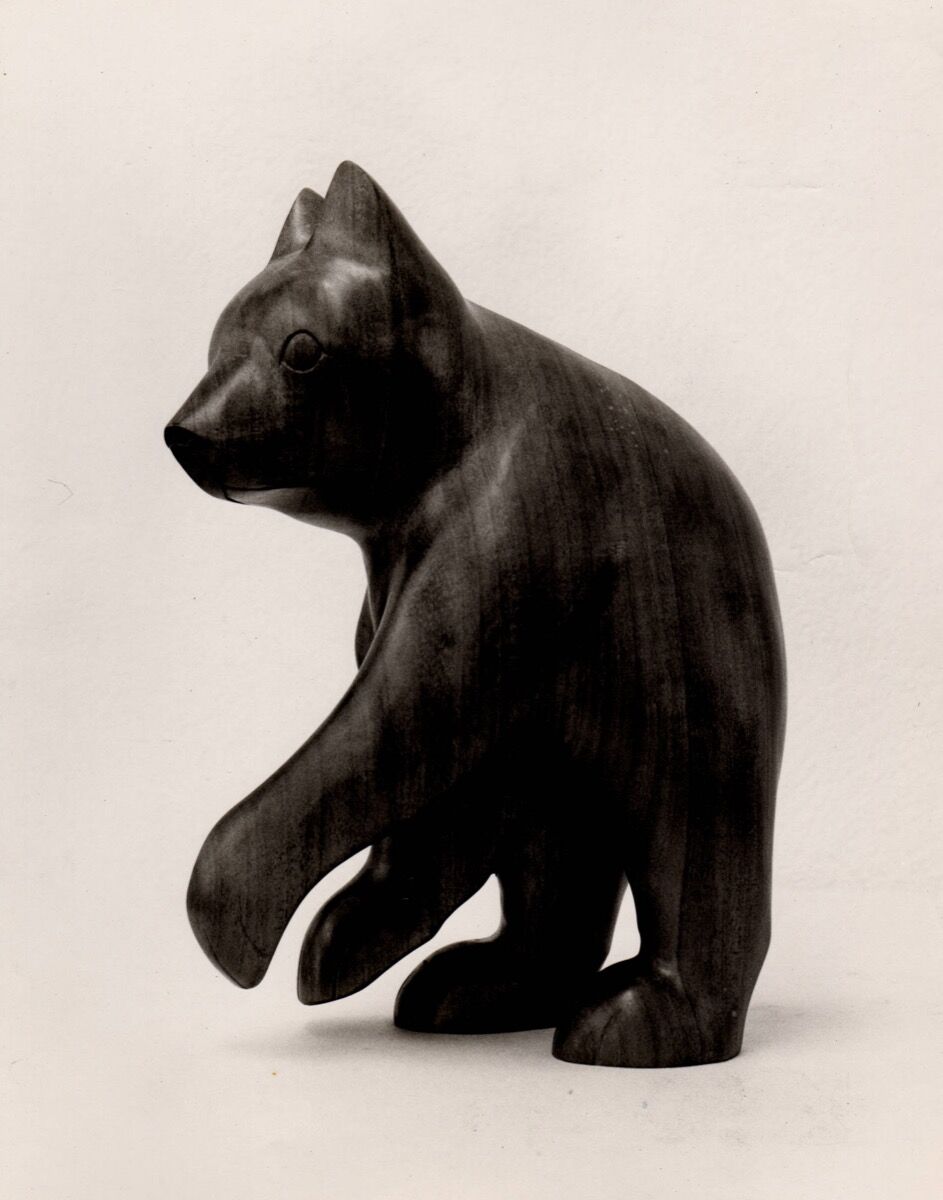 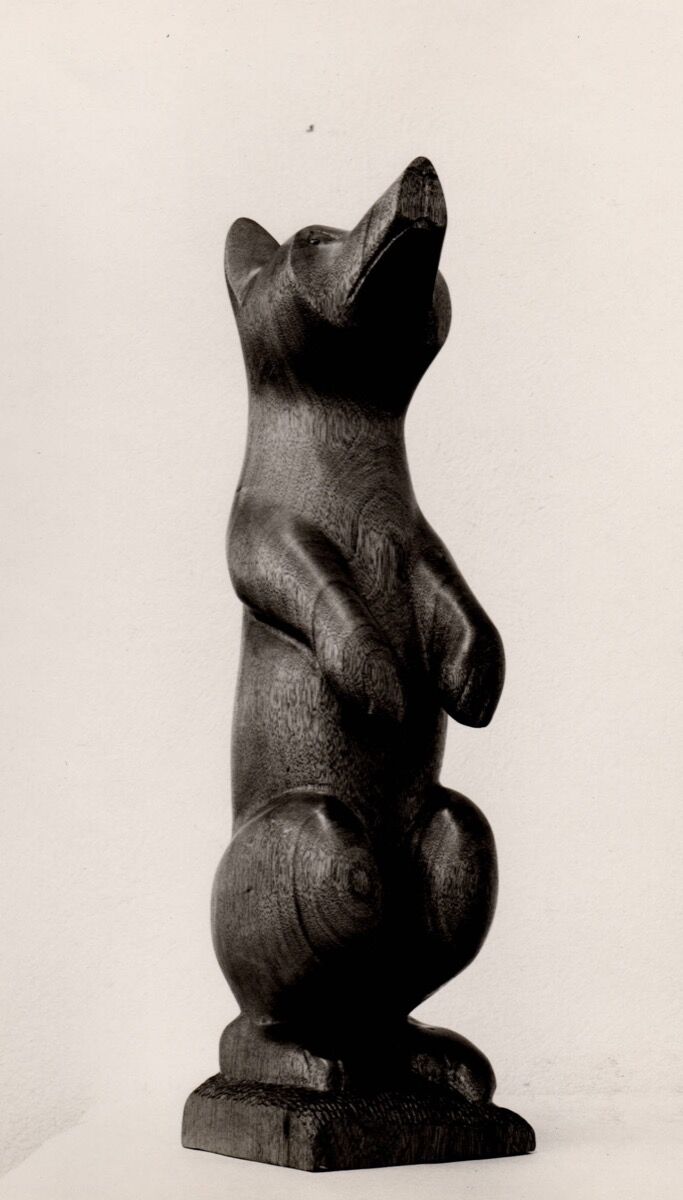 Advertisement
Crowe’s path was unique in other ways, too. After being orphaned in grade school, she left the Qualla Boundary for Chicago. According to Crowe’s dear friend Lane Coulter—who is also the nephew of Crowe’s longtime partner, Doris Coulter—a Chicago family with a summer home in North Carolina recognized Crowe’s talents, and supported her life and schooling in the Midwestern metropolis. During high school, Crowe took Saturday classes at the famed School of the Art Institute of Chicago, where she went on to receive her bachelor’s and master’s degrees. There, she experimented with all manner of sculptural mediums: “I worked in clay, built up figures in plaster, cut a few pieces in stone, wrought metal sculpture, and carved wood,” Crowe later recalled.
Coulter also remembered Crowe regaling him with tales about the time she worked in butter. One year during World War II, she’d been selected to forge the renowned “butter cow” for the Illinois State Fair. Butter was hard to come by during the war, but Crowe “got to keep the scrapings,” Coulter recalled, chuckling at her renowned resourcefulness. “She scraped away everything that didn’t look like a cow—and she had a lot of friends who enjoyed those butter scrapings for a long time.”
Crowe’s creative skills—and carving tools—also proved useful in even more unexpected ways. Once, when a burglar attempted to enter her Chicago apartment, Crowe “had her axe, which she used to whack his hands with the flat side,” Coulter laughed, recalling the story. “He was an unhappy thief.”
In 1952, Crowe left Chicago for Mexico. She’d received a John Quincy Adams Fellowship for Foreign Study, and spent 10 months at the Instituto Allende in San Miguel, learning from Spanish sculptor
José Mariano de Creeft
(later renowned for his 1959 bronze sculpture Alice in Wonderland, located in New York’s Central Park). According to Coulter, Crowe also routinely received critiques from
Diego Rivera
, who taught at the school during her fellowship.
By the end of her stay in Mexico, then in her mid-twenties, North Carolina called Crowe back. A post as the wood carving and sculpture teacher at Cherokee High School (which her uncle had also held) opened up, and Crowe snagged it. “She had plenty of options,” Coulter recalled, “but as a native woman, she really wanted to give back to the Eastern Cherokee people in Carolina.”
4 Images
View Slideshow 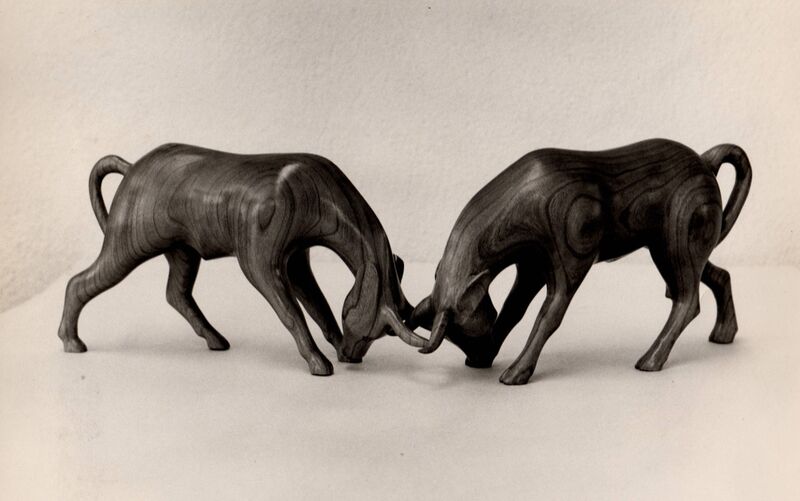 She set up a home and studio in Painttown, a community not far from where she was born. There, back in Cherokee ancestral lands, Crowe lived out her adult life and cemented her legacy. She taught thousands of students the art of Cherokee wood carving, and encouraged them to give the tradition their own spin—like she had.
Crowe’s teachings were based on her own practice, in which she used the traditional tools and techniques of Cherokee carving—but rather than create utilitarian objects, as was tradition, she depicted figures. Though she often depicted the animals that surrounded her in North Carolina, at times, she created abstractions and human forms.
She worshipped the variegated nature of wood, and how its idiosyncrasies and undulating grains could enhance a sculpture’s final form. “The movement of the grains—they almost seem alive under your hands—and the beautiful tones and textures all add life to the figures you whittle,” she once said.
As Fariello pointed out, Crowe was drawing from her fine art schooling, but also responding to her new life in the Qualla Boundary. She wanted to create a curriculum that students enjoyed, as well as objects that could be sold to the ever-growing number of tourists visiting the area. Whittling small animals was conducive to both goals. (After World War II, tourism expanded exponentially in the U.S., seeing more visitors to the Great Smoky Mountain National Park. Crowe and other Cherokee artists saw an economic opportunity for their people in the uptick.)
Crowe conceived a teaching plan for carving based on the creation of animals like cats, mice, geese, owls, and bears from small blocks of wood. Together with Doris Coulter, who taught weaving at the Cherokee High School, she even began to sell mail-order carving kits. In a 1966 article in the Girl Scout magazine American Girl, Crowe wrote a step-by-step guide to carving—simultaneously promoting Cherokee arts and the kits. “With little more than a pocket knife, a block of wood, and a few basic instructions,” she wrote, “you can be on your way.” (Notably, her audience here consisted of girls; perhaps another goal of the piece was to spread her craft to more women.)
As Coulter remembers, Crowe’s passion for carving and its many facets came through in her lessons. She was a playful yet strict teacher, who “kept her humor but took no prisoners,” he quipped. She used a red wax pencil to ruthlessly mark mistakes on his whittling blocks, he recalled, but always doled out encouraging words, too: “Keep goin,’ just keep goin.’” She described this double-edged approach to teaching in the same 1988 interview in the Winston-Salem Journal: “Be good to them. Give them confidence,” but also “give ‘em a rough time.” 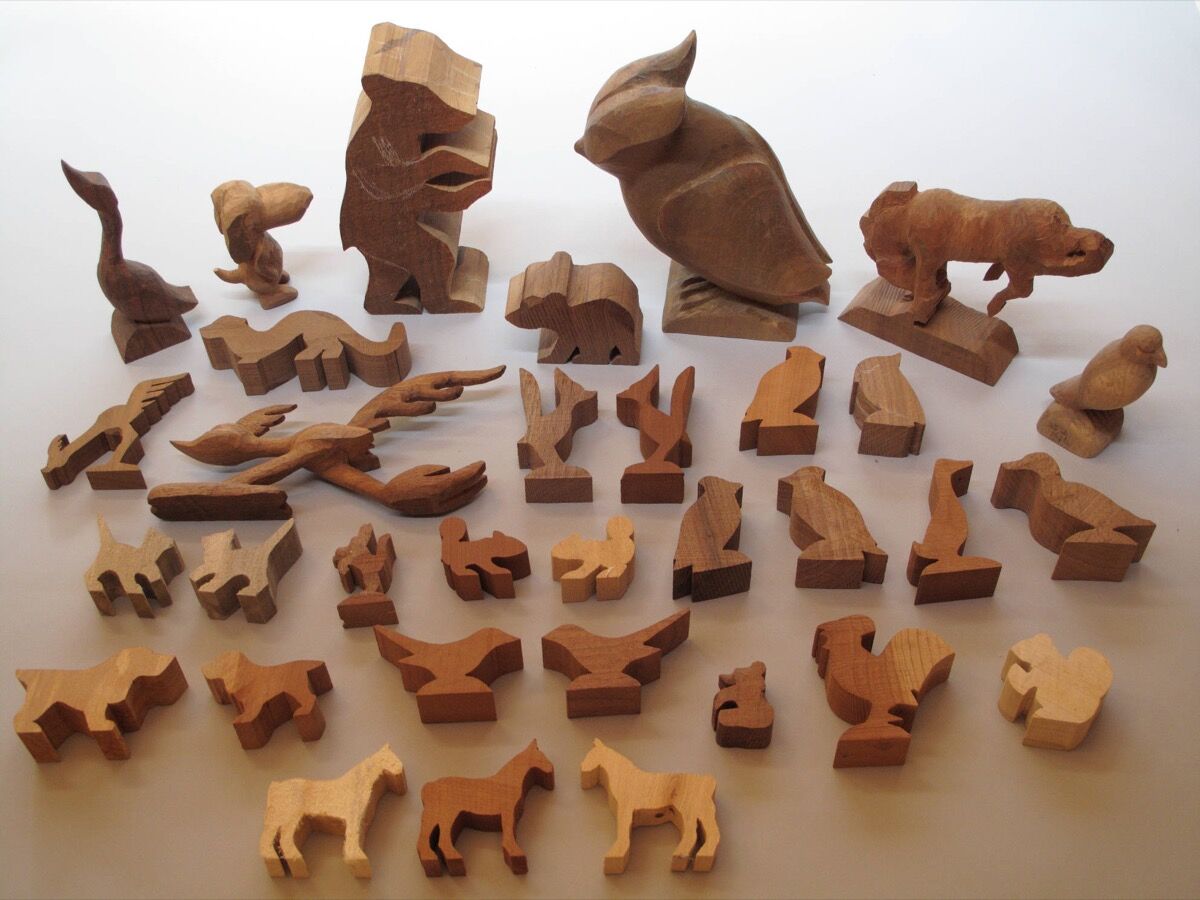 Crowe taught over 2,000 students during her tenure at the high school. Several, like Virgil Ledford, Butch Goings, and J. Bud Smith, went on to become successful artists who have supported themselves by selling their work. Crowe also left them with the desire to keep the Cherokee carving tradition alive. In a 2012 article by Bonnie J. Krause, Ledford explained that Crowe taught him how to create his “own unique designs while basing them in the culture of his people.” For his part, J. Bud Smith, who took over Crowe’s teaching position when she retired in 2001, explained that his mission was to “to carry on for Amanda Crowe.”
Crowe’s later years were spent teaching and carving in her studio, a log cabin that she hauled in parts from Virginia down to North Carolina, and then reassembled. She restored antique cars, was an avid hunter and fisher, and cared for a rotating cast of pets with Doris Coulter—including, according to Lane, a flying squirrel.
She became a hero in the Qualla Boundary for her long, passionate dedication to teaching the community. In a 1986 self-evaluation of her classes, she described the most satisfying aspects of her job: “teaching students who have potential ability which can be turned into pride and confidence” and helping to preserve Cherokee cultural heritage.”
Crowe summed up her commitment to the Cherokee in the 1988 Citizen-Times profile: “I could go anywhere right now, but this is my place. I love my kids and my home.” In Crowe’s 2004 obituary in the Citizen-Times, Barbara Duncan of the Museum of the Cherokee Indian described her impact: “Whether you look at her art as modern art, Cherokee art, or Appalachian folk art, Amanda Crowe was a tremendous artist. She will have a lasting impact on this community for generations.”
Almost until the end of her life, Crowe continued carving. Her screened-in porch remained filled with blocks of wood, waiting to be whittled, many into bears. Her influence can also be seen in how far her carved bears traveled: The Smithsonian counts several as part of its collection, and in 1973, President Lyndon B. Johnson gave three of Crowe’s bears as gifts to the daughters of King Frederik and Queen Ingrid of Denmark.
With pride and typical altruism, Crowe herself imagined her bears proliferating across the U.S., available to everyone. As she once said of the small—albeit mighty—bears: “Everybody in the country must have one.”
Alexxa Gotthardt
Related Stories