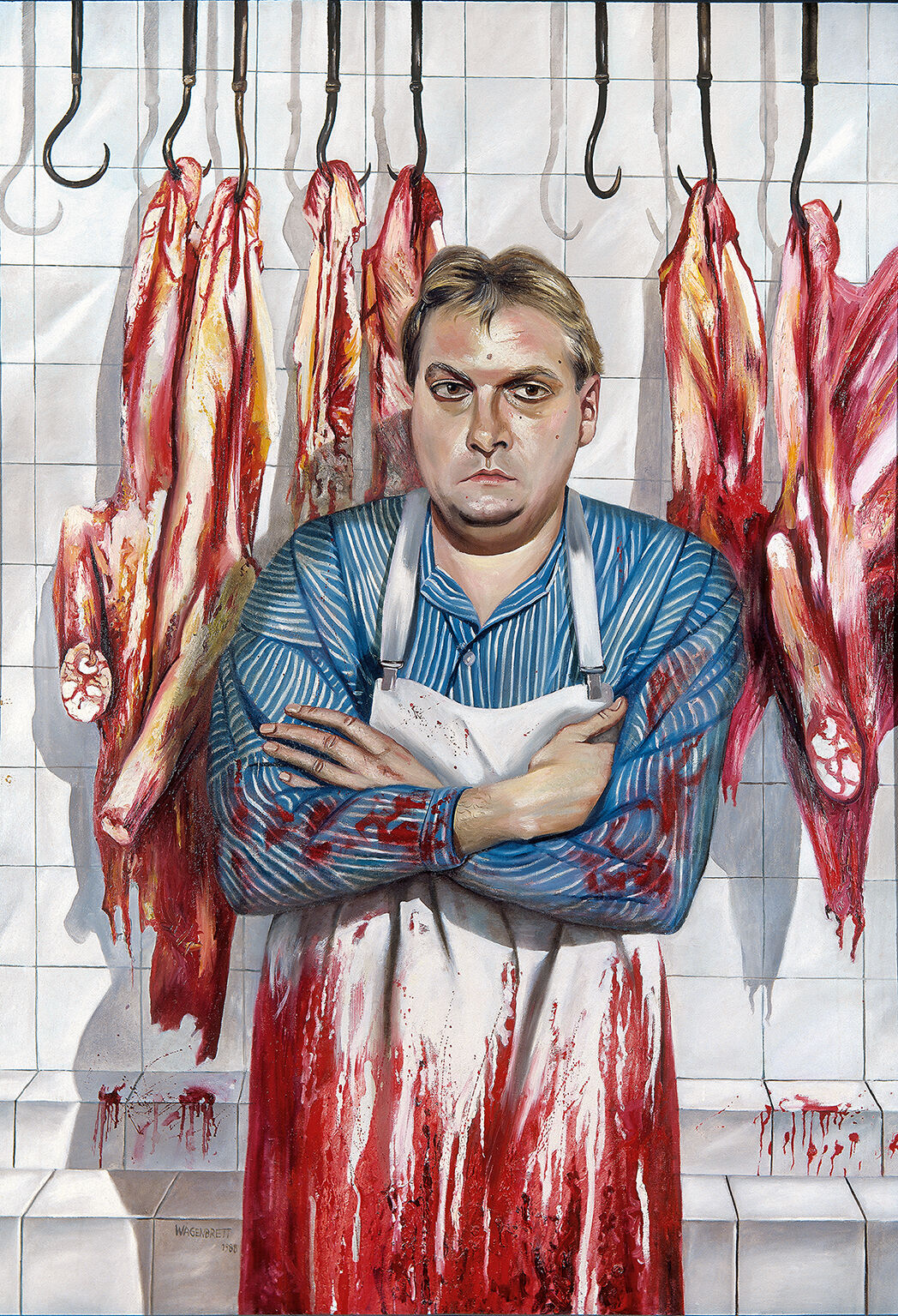 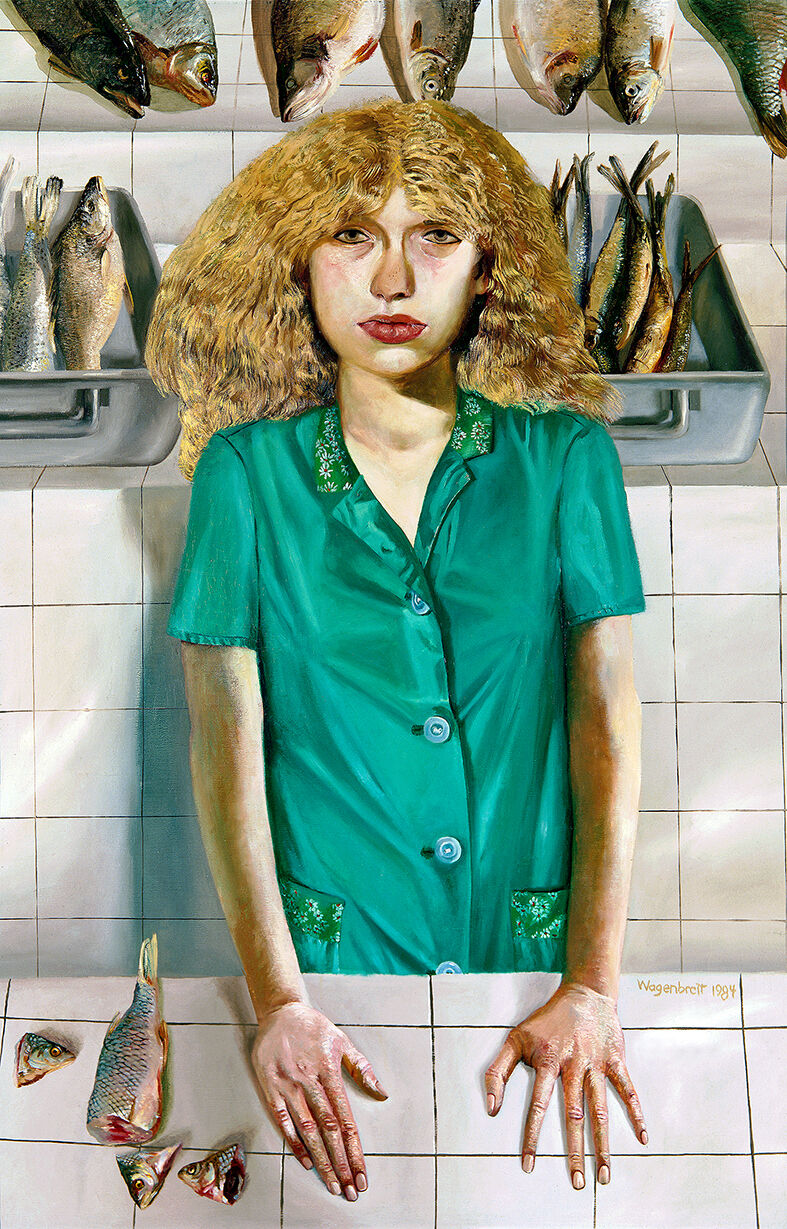 The butcher’s white apron and striped shirt sleeves are streaked with blood. Against the pristine white tiles behind him, cadavers of animals hang in a row on large, spiked hooks, dripping fresh trails of blood onto the floor. Heavy-jowled and sturdy of stature, he is a formidable presence. His face is shiny, as if from exertion, and flecked with a few tiny spots of blood.
In real life, the butcher in Norbert Wagenbrett’s powerful portrait Schlachter (1988) was an electrician. “But I didn’t like that at all,” said Wagenbrett, who is 65. “There are a lot of fabrications. In fact, all of it is a bit invented.”
When we spoke by phone, Wagenbrett had just been hanging paintings for his major solo exhibition at the Museum of Fine Arts in Leipzig, which is part of the first wave of German museums to reopen after the coronavirus lockdown. The show of nearly 50 portraits opened on May 7th, six weeks late.
The Leipzig painter is benefitting from renewed interest in East German art 30 years after the fall of the Berlin Wall. Alfred Weidinger, the Austrian former director of the Museum of Fine Arts, has been one of the driving forces behind the artist’s revival. (Weidinger left the museum on March 31st to return to his native country.) “He has an unbiased outsider’s view,” Wagenbrett said. 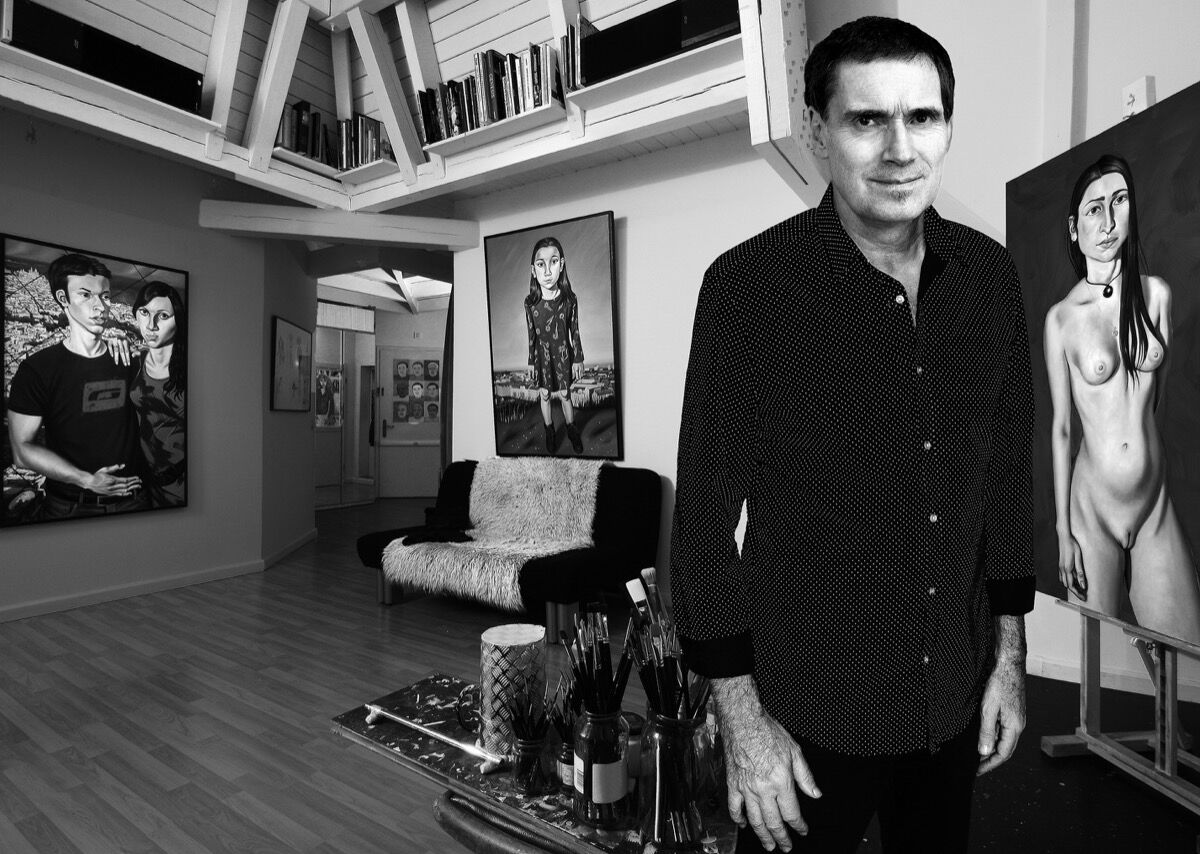 Portrait of Norbert Wagenbrett in his studio. Courtesy of the artist.

The years after reunification were not kind to East German art. Many eastern German museums were taken over by western directors who had little interest in the art of East Germany and consigned it to depots. A furious debate over its quality, known as the Bilderstreit, raged on and off over 30 years. In western minds, East German art was often dismissed as the propagandistic product of a totalitarian society that restricted artistic freedom and creativity.
But this was never the whole story. From the 1970s, the Communist dictatorship began to loosen its grip on art production, and pockets of creativity emerged in ramshackle quarters of cities like Berlin, Dresden, and Leipzig.
Recent exhibitions of East German art—including last year’s “Point of No Return” at the Leipzig Museum of Fine Arts, in which one of Wagenbrett’s paintings featured prominently—have led to a reappraisal and a more nuanced, less politically biased view.
At the opening of another show of East German art last year, marking the 30th anniversary of the fall of the Berlin Wall at the Kunstpalast in Düsseldorf, German president Frank-Walter Steinmeier observed that “from the western German side, we have perhaps too often in the past made the mistake of looking at the art of East Germany from a political perspective only.” Advertisement
Wagenbrett studied at the Leipzig Academy of Fine Arts under the painter Arno Rink, but he couldn’t focus there, so he stopped going to classes. “There were always people playing music or talking and that distracted me,” he said. Rink understood and visited him at his studio. “He gave me my freedom and I am very grateful to him for that,” Wagenbrett said.
The artist said he has experienced some lean times in the past decades; on occasion, he’s been reliant on social welfare. But he sees himself as lucky to have been able to focus on his art and sell works, while many of his peers could not. It helped that he was awarded the Irene and Peter Ludwig Prize in Vienna in 1987. “Collectors bought my work in the 1990s, and they still do,” he said.
In the meantime, Wagenbrett has been focused on creating his life’s work, which is to produce a gallery of portraits that together offer a picture of the society in which he lives. Some of the portraits feature people he knows well—for instance, his son and daughter—while others are people who intrigue him because they are somehow, in his words, “typical for our time.” Yet they are never stereotypes—his subjects retain their individuality.
Wagenbrett describes his style as “verismo,” but that doesn’t mean his portraits are naturalistic. In his youth, he worked for a spell as a lighting technician at the Leipzig opera, and his paintings, too, are “always a staging,” he said. Sometimes, the staging contains a narrative about the individual portrayed; other times, there’s social commentary. 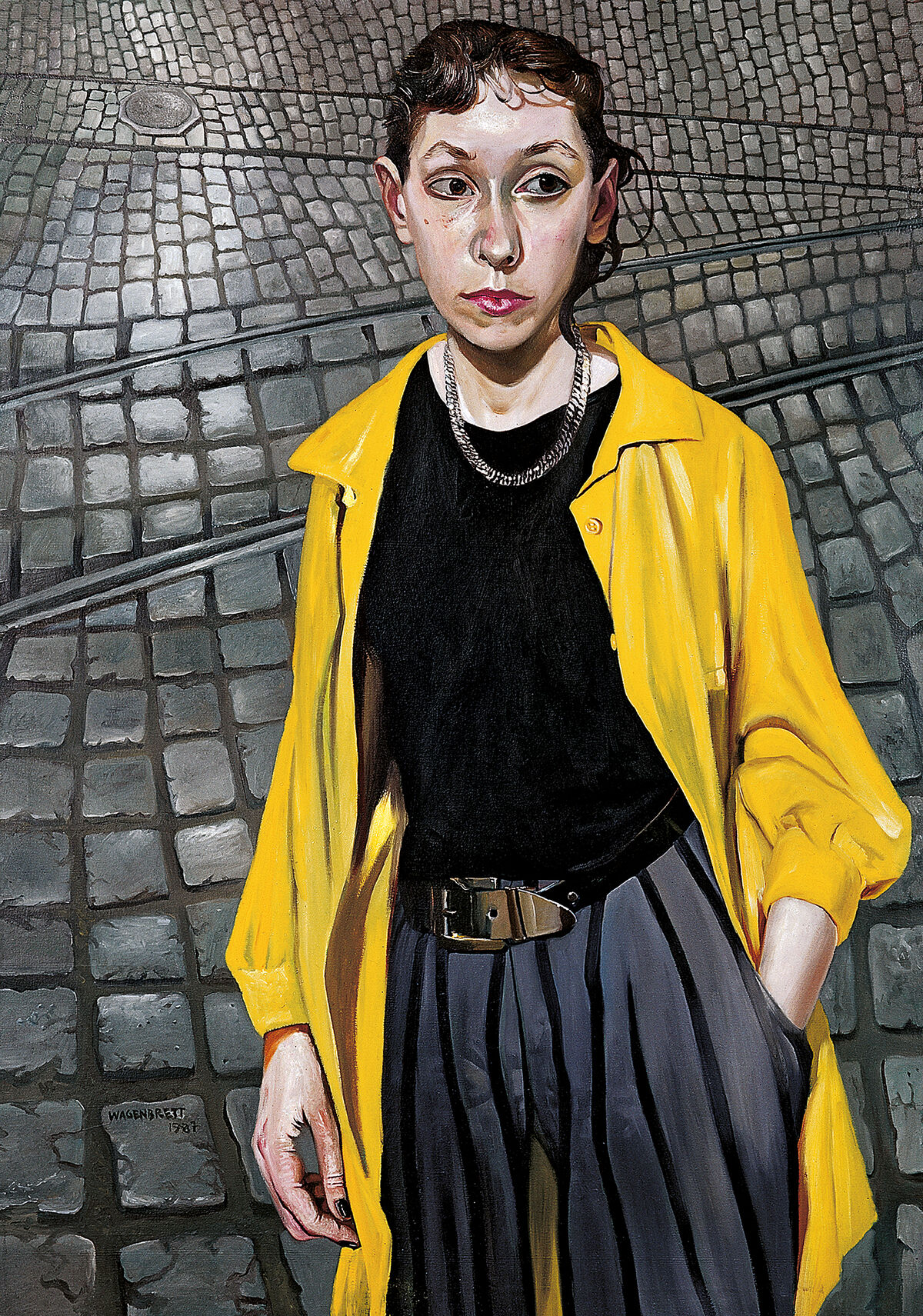 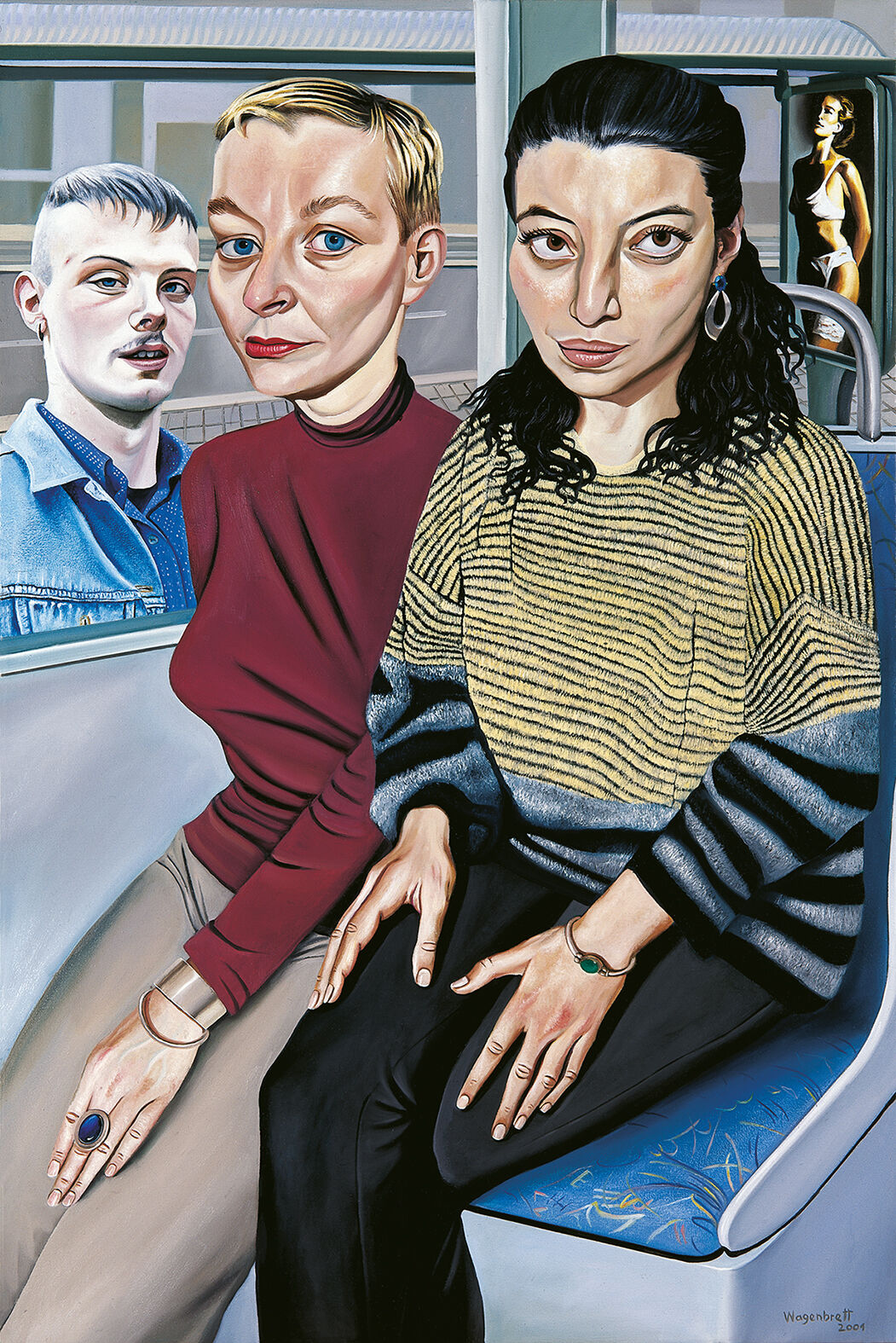 His 2001 painting In the Tram came about because a woman from Turkey wrote asking him to paint her. He added a female companion, a lingerie poster, and a man who could be a right-wing extremist looking menacingly through the window. The four figures, close together, create a tense yet ambiguous composition that could be a key scene in a movie. “In a world that offers so many media images, I have to create something that is very concentrated,” Wagenbrett said.
He says he learned about the necessity of “fully engaging with subjects” from copying the works of
Old Masters
, such as
Jan Lievens
. “I try to portray what I find as forcefully as possible,” he said. His portraits reflect that; the figures are exaggerated and condensed, becoming larger-than-life, intensely vital versions of themselves.
Another clear influence is
Otto Dix
. But where Dix’s portraits sometimes edge towards caricature in their unflattering accentuation of distinctive features, Wagenbrett’s works maintain respect for their subject. “I am of a different era, I didn’t live through World War I,” Wagenbrett said. “I didn’t go through these abysses. I can take a different approach.”
Wagenbrett is currently recovering from hospital treatment for an illness unrelated to the coronavirus. He hopes to be back to work soon, though one problem is that his models can’t visit because of social distancing rules. “That’s really annoying!” he said.
Catherine Hickley
Related Stories

5 Artists on the Influence of Mark Rothko