Artsy Editors
Feb 3, 2016 7:02pm
Though 2015 saw a number of record-breaking sales, the new year has been rife with speculation and rumor concerning the ongoing vitality of the art market. In all the excitement (and hyperbole) it’s easy to lose sight of where the market is really gaining and losing ground, so we combed the data to see which reports got it right—and where others may have gotten carried away in their proclamations that the end of the art market boom is near. 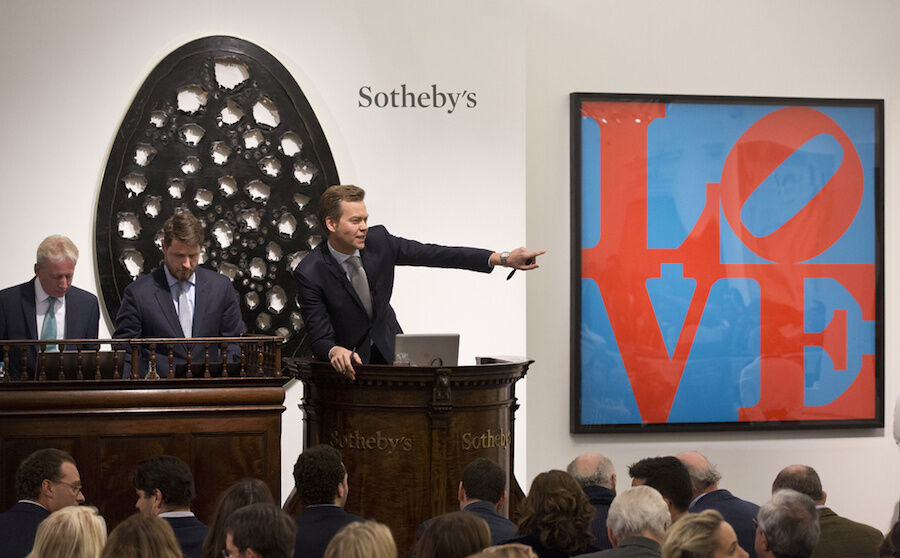 “It is worth noting that the art market is really a set of loosely related mini-markets, all of which behave very differently. But for the first time in years we are seeing a similar trend across each of these distinct markets: a slowdown.”
“Slowdown,” “stabilization,” and “stagnation” are three terms that have been consistently applied to the art market in recent months. Christie’s announced that sales across their divisions were down 5% in 2015 from the previous year. And Sotheby’s sales were more or less flat, year-over-year. But Phillips saw a whopping 34% increase in sales over 2014. While the latter house’s bottom line is much lower than the other pair, it suggests that some but not all sectors of the art market are lagging.
The art market stabilized in 2015 but remains a safe investment for achieving capital gains, according to data provided by art market price index Artprice. However, the current instability in global financial markets and no year-over-year improvement on auction results does hint at stagnation in the secondary market. Artprice stresses that the total revenue from public sales in the West has more than doubled in 10 years, and that the value of masterpieces is untouched by economic fluctuations. Most juicily, for those interested in art as an investment, the analytics platform cites a constant rate of return for an artwork worth more than $100,000 of 12–15%.
Across the “mini-markets” that Burns cites—referring to the differing supply and demand structures for works in distinct segments of the market, such as Old Masters, Russian art, Post-War, and Contemporary, which in turn dictate differing levels of price volatility and overall performance—sales figures were indeed lower in the past 12 months. Burns makes particular reference to the disappointing results of the London Old Master auctions, which earned Christie’s some of its lowest sales figures in the category in 10 years. Nonetheless, the 12-15% growth in upper-market masterpieces holds up across different regions (even if the highest figures are still achieved in New York), an indication that the market, while stabilizing, is mature. Artprice also highlights the role that an increase in the number of works trading hands has played in the stabilization of the market. Last year, in the West alone, 360,000+ works changed hands, an increase of three percent over 2014 and 40% more than a decade before, in 2005. So, even if an uptick in market velocity hasn’t necessarily correlated to significant economic gains, trade is occurring at a fast clip.

“In November, most of the contemporary, impressionist and modern auctions in New York failed to hit their low estimates, a sign that these markets have been pushed far enough.”

A mixed bag of results from the November Contemporary, Impressionist, and Modern sales in New York warrants a bit more nuance on this statement, even if some sales certainly underperformed. At Christie’s New York, the Post-War and Contemporary Art Evening Sale on November 10th saw several disappointing results as works by
Joan Mitchell
and
Richter
, among eight others, failed to reach their low estimates. Nonetheless, the now-infamous “The Artist’s Muse” sale just one night before fell handily within its estimate.
On what’s relatively the other side of the price-spectrum for such weeks, the Sotheby’s day sale on November 12th also yielded good results, with some works achieving more than double their high estimate. (
Yayoi Kusama
’s Blue Pumpkin was one successful result among many, fetching $538,000 on a $150,000–200,000 presale estimate.) The Sotheby’s Contemporary Art Evening Auction on November 11th also saw 24 works exceed their high estimates, including pieces by
Basquiat
and
Calder
. However, the house’s online sale “Fast Forward: New Directions in Contemporary Art” on November 17th saw a number of works—including pieces by
Daniel Gordon
, Felandus Thames, and Jonathan Roth—fail to reach their low estimates. As much as that could be read as market-softening, it could equally be a sign that buyers’ appetite for online sales (in comparison to traditional in-room and telephone bidding) still has much room for growth.

“Conventional wisdom has the art market softening. But in April, Laurence D. Fink, chairman of the asset manager BlackRock, said at a conference that ‘the two greatest stores of wealth internationally today’—compared with gold in the past—are contemporary art and real estate.”

According to Artprice’s findings, art now plays an integral role in the creation of soft power for the U.S., China, and Qatar. And the art world is enticing new audiences and convert them into collectors. Art market players have continued to iterate on ways to do just that, one example being Frieze Masters’ Collections section this past fall, which saw the addition of dealers of ceramics and antiquities in the aisles. Data from the 2015 Knight Frank Wealth Report highlights the pull of art as luxury, playing on increasing demand and limited supply, and details that 61% of all respondents said that their ultra-high-net-worth individual clients (individuals with wealth in excess of $30 million) were becoming more interested in collecting art. This no doubt explains the compounding year-on-year increase in the number of art collectors: Following World War II, a mere 500,000 individuals were estimated to collect art, while in 2014 an astounding 70 million people purchased artworks, according to Artprice’s CEO Thierry Ehrmann. The social worth of art is also growing. An average of 700 new museums are being built each year, and more museums were constructed between 2000 and 2015 than throughout the entirety of the 19th and 20th centuries.

2015’s Biggest Art Market Developments and What They Mean

“The heat went rapidly out of the market for some names that had seen highly speculative purchases just a year before. Zombie formalism is the term sometimes used to describe works by artists such as Lucien Smith, David Ostrowski, Parker Ito, Dan Rees and Christian Rosa, whose prices had soared in 2014.”

While 2014 seemed to be a bumper year for the sale of Zombie Formalism, 2015 didn’t look quite so peachy. In contrast to the high number of lots of abstract painting by young artists offered for auction in 2014, many of which exceeded estimates, the number of unsold works by those artists rose last year—and below-estimate sales of those works were even more prevalent. While
Lucien Smith
’s Two Sides of the Same Coin (2012) sold at Sotheby’s London in 2014 for a stunning $369,123, the only work to hold onto that level of success in 2015 was the artist’s It Happened One Night (2012), which sold at Phillips London for $279,225. The same is true for
David Ostrowski
,
Parker Ito
and, to a lesser extent,
Christian Rosa
. In November 2014, Christie’s New York sold Rosa’s Untitled (2013) for $209,000. But, while Christie’s managed to sell most of the Rosa lots put on offer in 2015, other auction houses saw deflated prices and unsold works. The price, it seems, is high for having jumped on the Zombie Formalism bandwagon.
—Katharine Worley, Clément Thibault, and Pierre Naquin
Related Stories