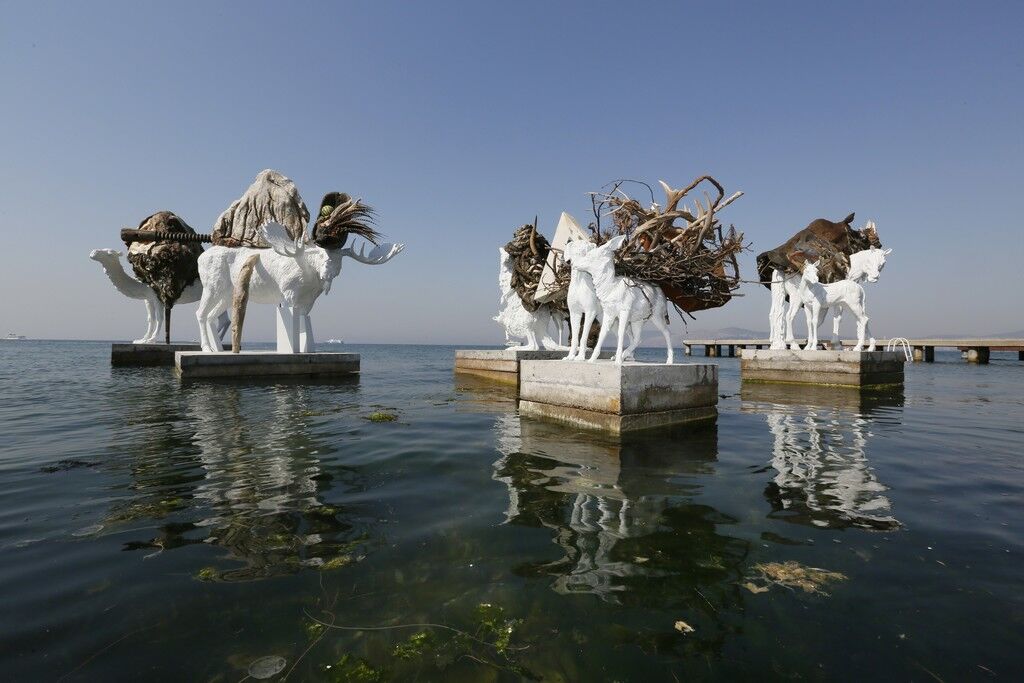 Adrián Villar Rojas
The Most Beautiful of All Mothers, 2015
Istanbul Biennial
In fact, it’s the metaphor of this corrosive-but-necessary element that the 14th Istanbul Biennial, titled “SALTWATER, A Theory of Thought Forms” and open through November 1st, hinges on. After all, the city where “East” meets “West” is split by the Bosphorus, a unique straight that blends the saltwater of the Mediterranean with the fresh water of the Black Sea. The Bosphorous is both an actor and an artwork in this biennial. And surely, by now, any art follower’s Instagram feed has been barraged with
Adrián Villar Rojas
’s life-sized fiberglass Noah’s Ark-esque animals hovering over the brackish straight or
Pierre Huyghe
’s underwater island marine-life theater stage. This is a biennial that holds true to its titular theme, ebbing and flowing with the intensity and steadiness of a tide.
The extent to which this metaphor guides (or rules, really) the immense exhibition parallels the square footage of this megalith city. For the record, the metropolitan area of Istanbul is 2,063 square miles—and while not all of the city is utilized in the biennial, at moments it sure feels like it. Certainly it reveals something that the exhibition’s catalogue is positioned as a guidebook, mapped out as a three-day itinerary, including treks out to the Büyükada (one of the Princes’ Islands) and Boğaz’ın Kuzeyi (Northern Bosphorus). Liam Gillick
Hydrodynamics Applied, 2015
Istanbul Biennial
Thirty venues are involved, and only four contain group shows of more than a singular work or artist. “The Channel,” at Istanbul Modern, could be called the biennial’s thesis show. It features about 55 of the biennial’s 100 “participants,” a term employed by its “draughtsman” Carolyn Christov-Bakargiev to draw note to her inclusion of oceanographers, storytellers, mathematicians, and neuroscientists alongside artists of the more white-cube variety. The event turns towards the inherent cross-disciplinary nature of art history and contradicts the static notion that a biennial is a forum for the cutting-edge or contemporary (sorry, Venice!).
Istanbul marks Christov-Bakargiev’s first major outing since shaking things up for dOCUMENTA (13), the landmark quinquennial held since 1955 in Kassel, Germany. She extended that exhibition to places as far-flung as Banff, Canada; Alexandria/Cairo, Egypt; and Kabul, Afghanistan (and may have been the only person to have sojourned to all four sites). While the Istanbul effort assumes a similar diasporic character—the inclusion of many venues, she writes, “argues for public space to be reconstituted in interlinked temporary and provisional spaces of habitation”—and duly addresses the charged political, historical, and theoretical frameworks expected from such an art event, Christov-Bakargiev’s biennial kicks off with a few words not commonly heard in the art world. “With and through art, we commit ourselves to the possibilities of joy and vitality, leaping from form to flourishing life,” she writes in her curatorial text, suggesting that what unites her selection of works is unbridled wonder. 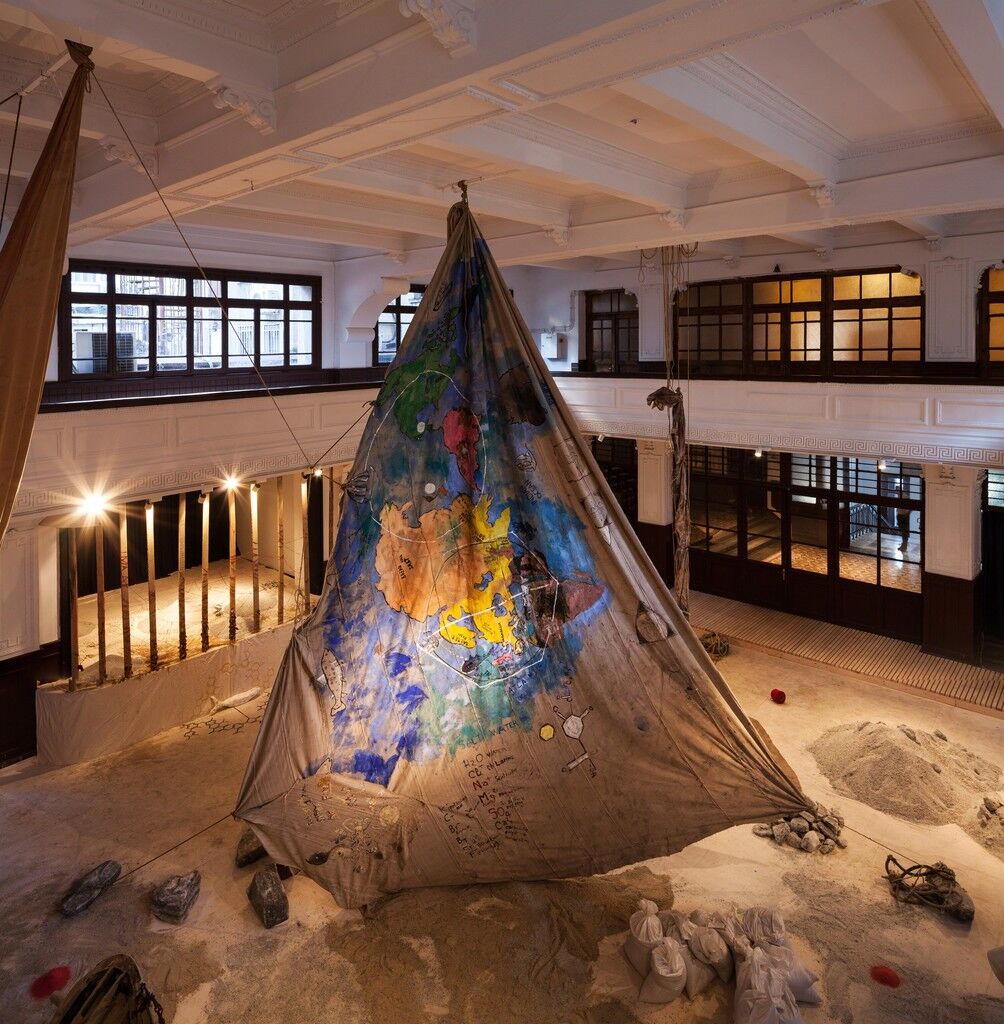 Anna Boghiguian
The Salt Traders , 2015
Istanbul Biennial
Advertisement
Wonder, which in the age of instant digital recall often feels like a memory, truly underlies this show. It operates upon a metaphor—positive and negatively charged molecules, the motion of water waves, the commodity and currency of salt—to consider the many channels through which life, society, and knowledge are understood and complicated. But Christov-Bakargiev anchors this spirit with the ideas of British theosophist
Annie Besant
, who “saw ‘thought forms’ as embodied entities of the imaginal realm, visible and vibrating states of what remains generally invisible—forms of the real world that can be apprehended through intense awareness, meditation and attention.” Besant’s offset-prints exploring symbols and signs—from 1905, around the same time Ferdinand de Saussure broke down the philosophical barriers of signs and symbols in language—set the tone to look, and ergo, to think beyond the obvious.

Theaster Gates
Three or Four Shades of Blues, 2015
Istanbul Biennial
Likewise, there is a plethora of non-Turkish artists who have created site-specific pieces for the region, such as American
Theaster Gates
’s studio-shop on Boğazkesen Street, where he makes a ceramic pot (recalling a local artisanal tradition) daily while listening exclusively to Atlantic Records LPs. If this wasn’t Theaster Gates, the social practice king of Chicago, then the whole performative pot-making sessions would read as twee at best, wasteful and exploitative at worst.
Belgian-Mexican artist
Francis Alÿs
’s gorgeous black-and-white video The Silence of Ani (2015) intertwines Armenian teenagers bird-calling through the ancient ruins of Ani (a pilgrimage site in Turkey for Armenians, the abandoned “city of 1001 churches,” where many of its 200,000 inhabitants were massacred). It’s not clear why Alÿs was elected as the poet to eulogize the 100th anniversary of the Armenian genocide, but Gates and Alÿs are major names, and carte blanche is often awarded to those with star power. That might also explain why Rizzo Palace, an abandoned rickety manse on Büyükada, contains Hisser (2015), a video in which biennial bawd
Ed Atkins
bruises up his famed avatar in a narrative about a man who meets his death when his own bedroom sinks into the ground. 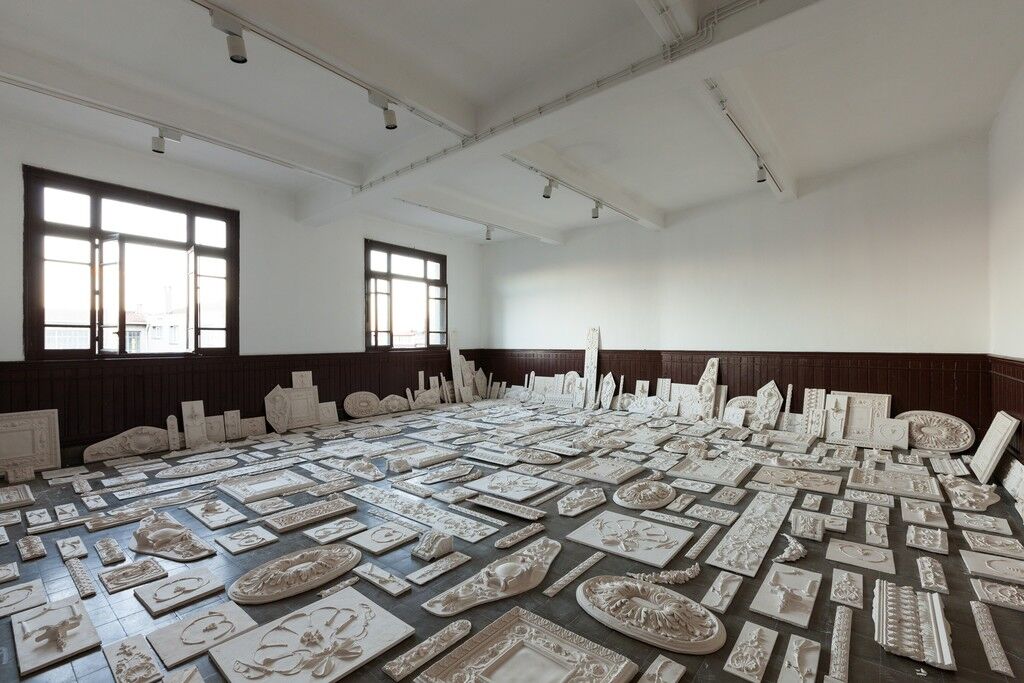 Michael Rakowitz
The Flesh Is Yours, The Bones Are Ours, 2015
Istanbul Biennial
But any missteps aside, Christov-Bakargiev’s metaphorical play crystallizes around the essence of Besant’s “Thought Forms” in various works in the exhibition. These come in the form of what might be dubbed “future relics,” artifacts made today and aching to be found tomorrow, which offer commentary on this duality. For
Michael Rakowitz
’s The Flesh is Yours, The Bones are Ours (2015) (found in the Galata Greek Primary School venue), the artist compiled plaster molds, dog skeletons from Istanbul’s dog-massacre island Sivriada, bones of livestock from dispossessed Armenian farms in Anatolia, and fragments of lost
Louis Sullivan
buildings in Chicago to create rubbings—like those tourists can make of tombs in London’s Westminster Abbey. Similarly, at Istanbul Modern, Chinese
Liu Ding
’s series “Temporary Actors” incorporates today’s beauty standards (think bulging male muscles and lithe female forms) into the style of figurative socialist realist Maoist propaganda, while Singaporean Song-Ming Ang updates a 19th–century German carved wooden musical stand by casting it in glass, exacerbating its fragility while highlighting its “thought-form”-ness. Perhaps the most striking example in the biennial’s “The Channel” is Asli Çavuşoğlu, who drew in blank, worn-out prayer books in that infamous red of the cochineal bug, which for centuries was the only source of red dye and ink. 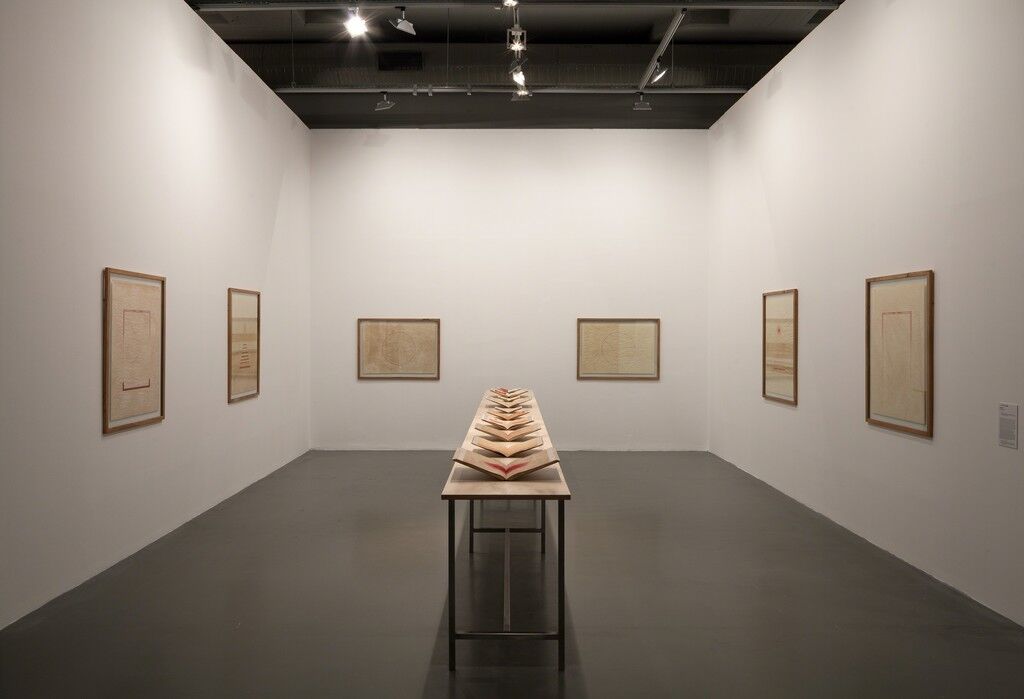 Over in Beyoğlu, across from Hotel Galatasaray at Bostanbaşı Street,
Deniz Gül
flips the script on tomb raiders and common thieves—who historically combed the floors of abandoned houses for left–behind treasures—by replacing the ceiling of a derelict house with carved wooden slabs. Look up, not down, she says. The value is in the organic nature of the material. And from
Wael Shawky
, comes the completion of his trilogy “Cabaret Crusades” with Cabaret Crusades: The Secrets of Karbala (2015), a film screened in the Küçük Mustafa Paşa Hammam, a 14th–century blue–bathed cellar and one of Istanbul’s oldest buildings. The campy film (all actors are puppets made of Murano glass) depicts the Battle of Karbala, the very bloodshed that split Islam into Sunni and Shia factions, in present-day Iraq. It’s utterly transformative in terms of time, as both the issues at play and its aesthetics could exist in the future, the past, or even today. 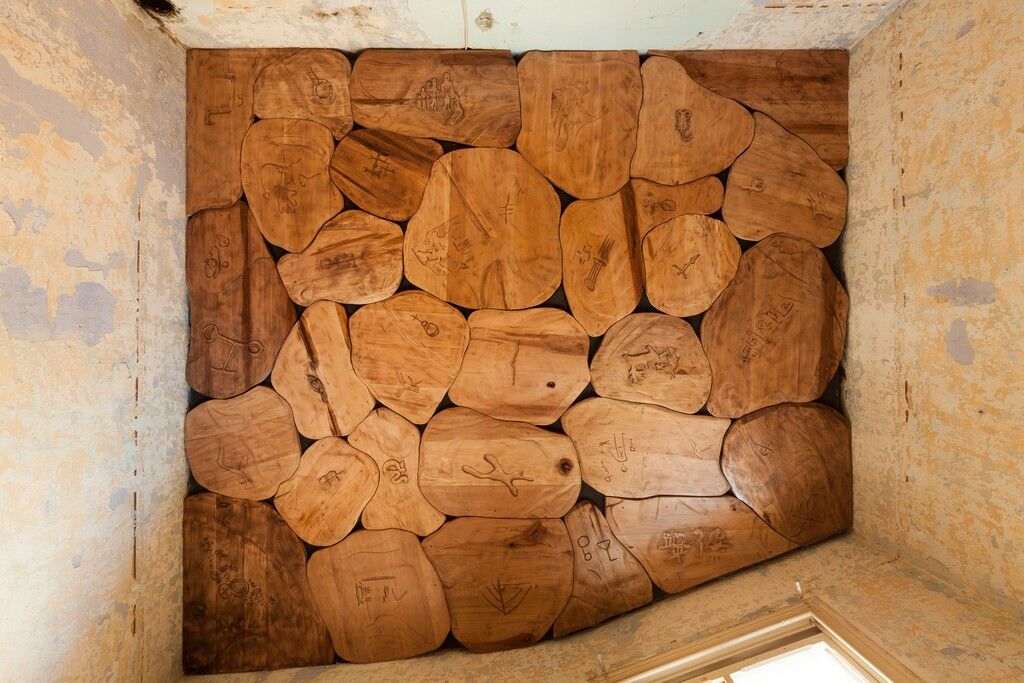 Deniz Gul
Stone (Manuscripts Don't Burn), 2015
Istanbul Biennial
When powerhouse literary critic Donald Davidson wrote, in his 1978 “What Metaphors Mean,” “Metaphor implies a kind and degree of artistic success,” he specifically was not talking about art, or artists, or anything really to do with the fine arts. However, art, being an inherently interdisciplinary mode of thought, can be understood through the kinds of language mechanisms, such as literary devices, to which a metaphor belongs. He continues: “It [a metaphor] is something brought off by the imaginative employment of words and sentences and depends entirely on the ordinary meanings of those words and hence on the ordinary meanings of the sentences they comprise.” And from these ordinary interpretations, metaphors then produce a truer or realer observation than the words alone could provide. In the case of “Saltwater,” a biennial so predicated on this metaphorical concept, Christov-Bakargiev has selected a group of works that bring to the surface the ways in which the human condition ebbs and flows. Earthy, coarse, rude, and shocking—much like the essential mineral, our essence is a contradiction.
Julie Baumgardner