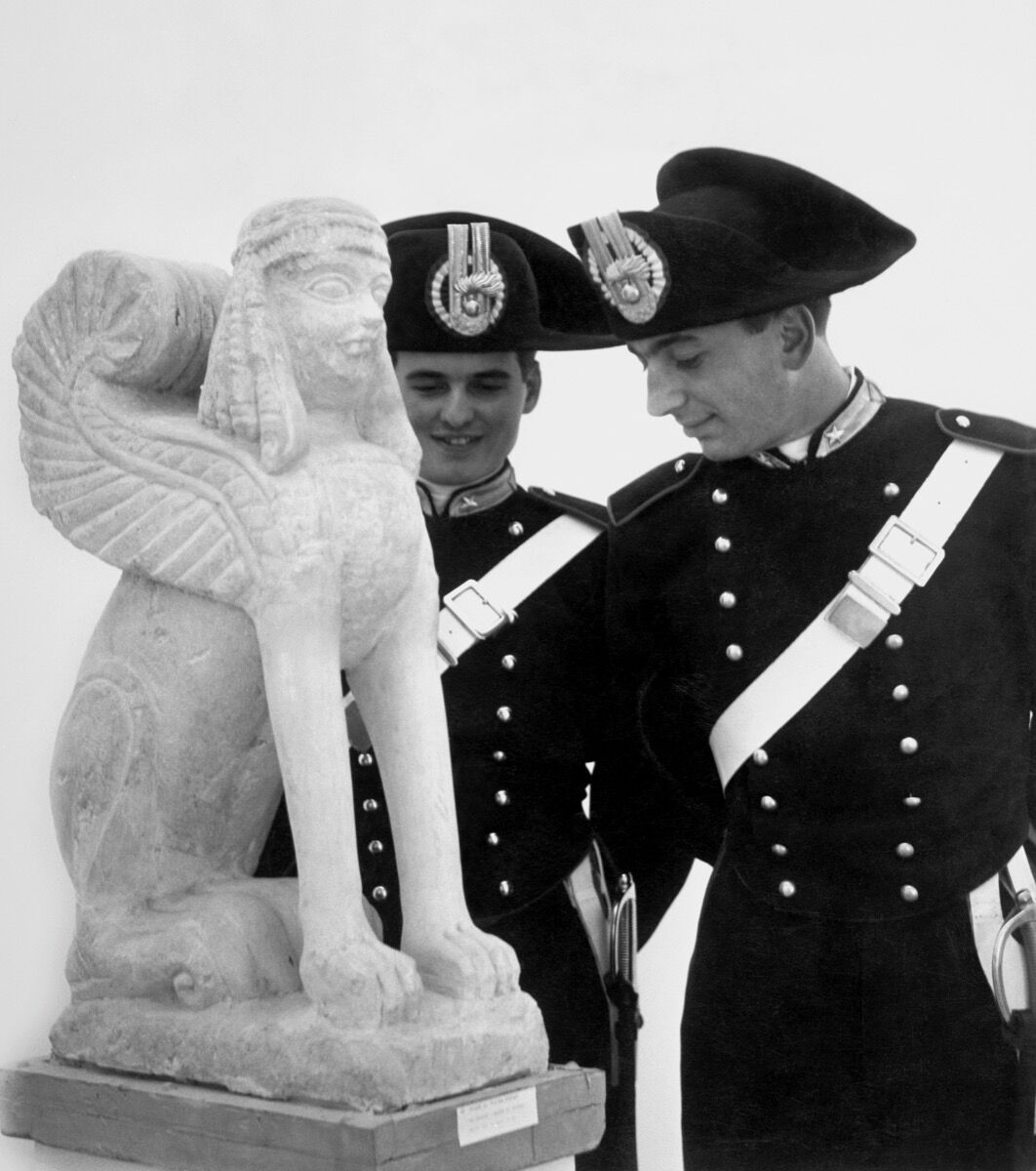 Italian Police in an exhibition with an Etruscan work, 1955.Photo by Touring Club Italiano/Marka/Universal Images.Group via Getty Images.

In the late 1960s and early ’70s, thefts from museums and archaeological sites were on the rise. In an effort to protect cultural property, nations convened and drafted the 1970 UNESCO Convention on the Means of Prohibiting and Preventing the Illicit Import, Export and Transfer of Ownership of Cultural Property. A year prior, in anticipation of the 1970 UNESCO Convention, the Italian government founded the world’s first law enforcement team devoted to protecting art and heritage.
In 1969, Italy formed the Comando Carabinieri Tutela Patrimonio Culturale (TPC), better known as the Carabinieri Art Squad. The TPC is an arm of the Carabinieri (the national gendarmerie of Italy carrying out domestic policing duties) and is part of the Italian Ministry of Cultural Heritage and Activities and Tourism. It plays an essential role in safeguarding and protecting national heritage, through the prevention and repression of multiple and interrelated criminal activities.
Over the decades, the Italian government has invested in making the TPC’s crucial work more accessible. In 1980, the TPC established Leonardo, a database that provides law enforcement agencies around the world with crucial information about stolen artworks. The database now contains information about more than 1.1 million stolen objects. Then, in 2014, the TPC announced the creation of iTPC, a free-to-download app available in Italian and English. It allows users to input a photo of an artwork and search for a match on the stolen art database. 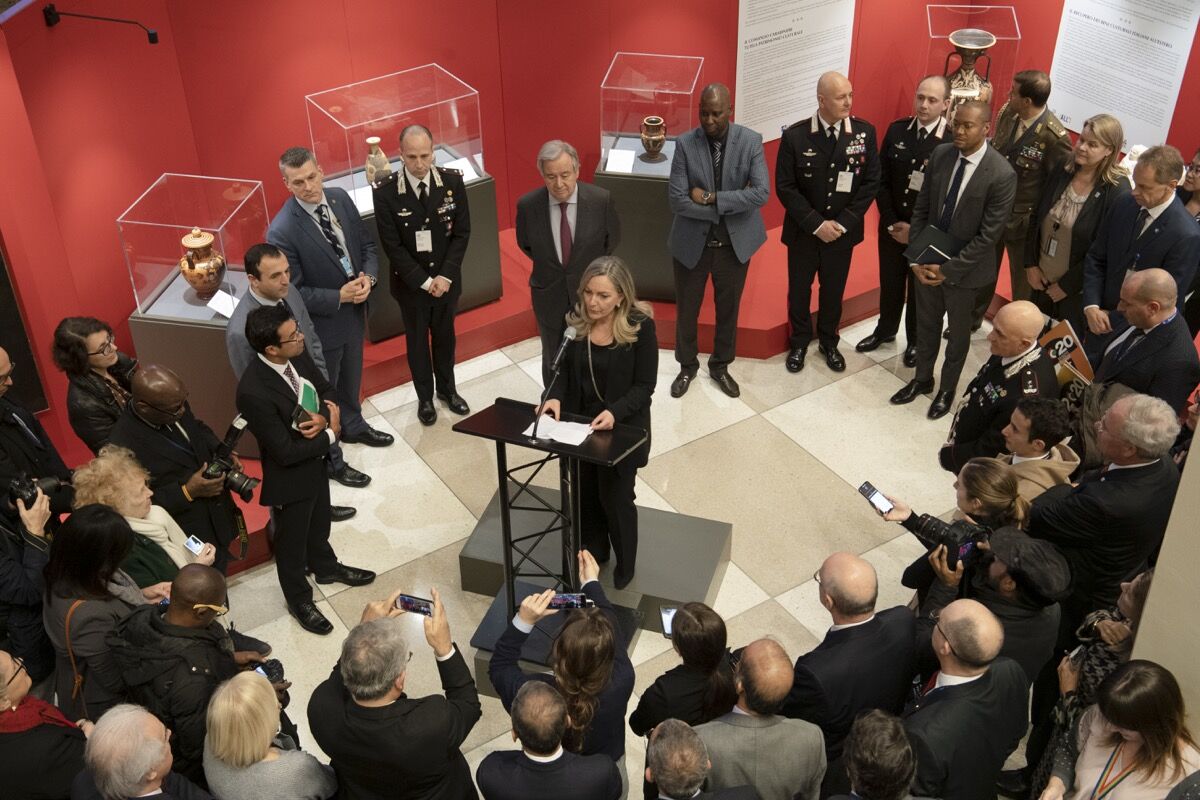 Opening ceremony of the exhibition "Recovered Treasures: The Art of Saving Art," organized by the Permanent Mission of Italy to the United Nations. Photo by Evan Schneider.

Other nations followed Italy’s lead, but have struggled to replicate the TPC’s success. For example, the FBI’s Art Crime Team in the United States was not founded until 2004, and today is comprised of only 20 agents—the Carabinieri art crime team, meanwhile, boasts nearly 300 officers. And while the Scotland Yard’s Art and Antiquities Unit was founded the same year as Italy’s TPC, the U.K. equivalent is much smaller, focuses primarily on London, and maintains a much less extensive database.
The TPC has been instrumental in peacekeeping missions in the Middle East and works with nations in conflict to assist with the preservation of cultural heritage, even during times of conflict. The unit also safeguards artworks in regions struck by natural disasters, such as floods and earthquakes. In addition, the TPC investigates art frauds and forgeries.

When looters met their match 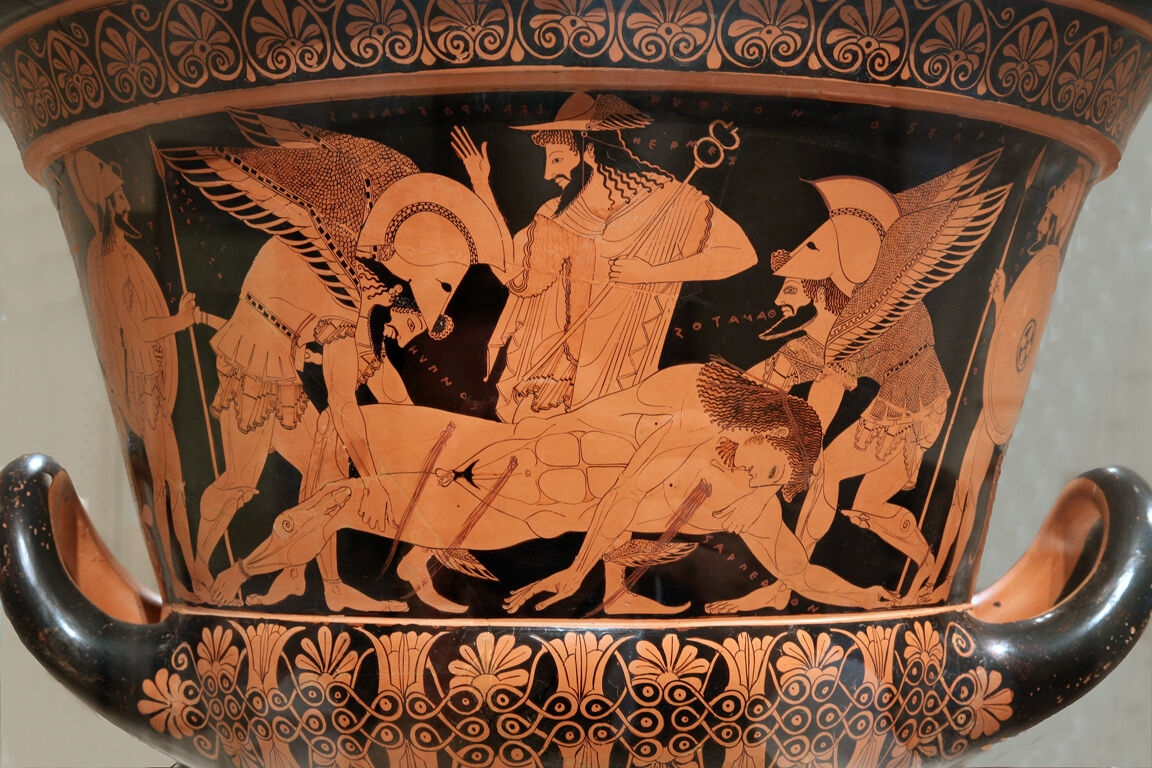 Advertisement
Due to the value of art and cultural heritage on the international market, Italy has faced rampant looting for centuries. However, in the early 1970s, a highly coveted piece of ancient art was illicitly removed from Italy’s borders, and it eventually brought global attention to the issue of looting.
In November 1972, the Metropolitan Museum of Art acquired the Sarpedon krater, better known as the “Euphronios krater.” The museum paid $1 million for it, the highest price ever paid by a museum for an antiquity at the time. Immediately, Italian authorities raised concerns about the object’s provenance; they believed the krater had been illicitly removed from Italy, but they were unable to prove the object’s origin.
The TPC’s investigations eventually revealed the truth, beginning in the 1990s, when the Carabinieri discovered evidence of an illicit antiquities network that linked the Euphronios krater to a specific looted Etruscan tomb in Cerveteri, Italy. The Carabinieri raided the Swiss warehouse of antiquities dealer Giacomo Medici and discovered that he bought the krater directly from the tomb robbers. Thanks to the investigation, Italy and the Met reached an agreement to return over a dozen objects, including the Euphronios krater, to the Mediterranean nation. Title to the krater was transferred back to Italy in January 2008, and the object was ultimately returned to Cerveteri, where it is on permanent display at an archaeology museum. The Carabinieri was responsible for the successful investigation and the revelation of a wide-scale looting network that ultimately sold works to reputable museums and through major auction houses. Although the return of the Euphronios krater is one of the best-known repatriations, the TPC touts many important recoveries.

A half-century of successes 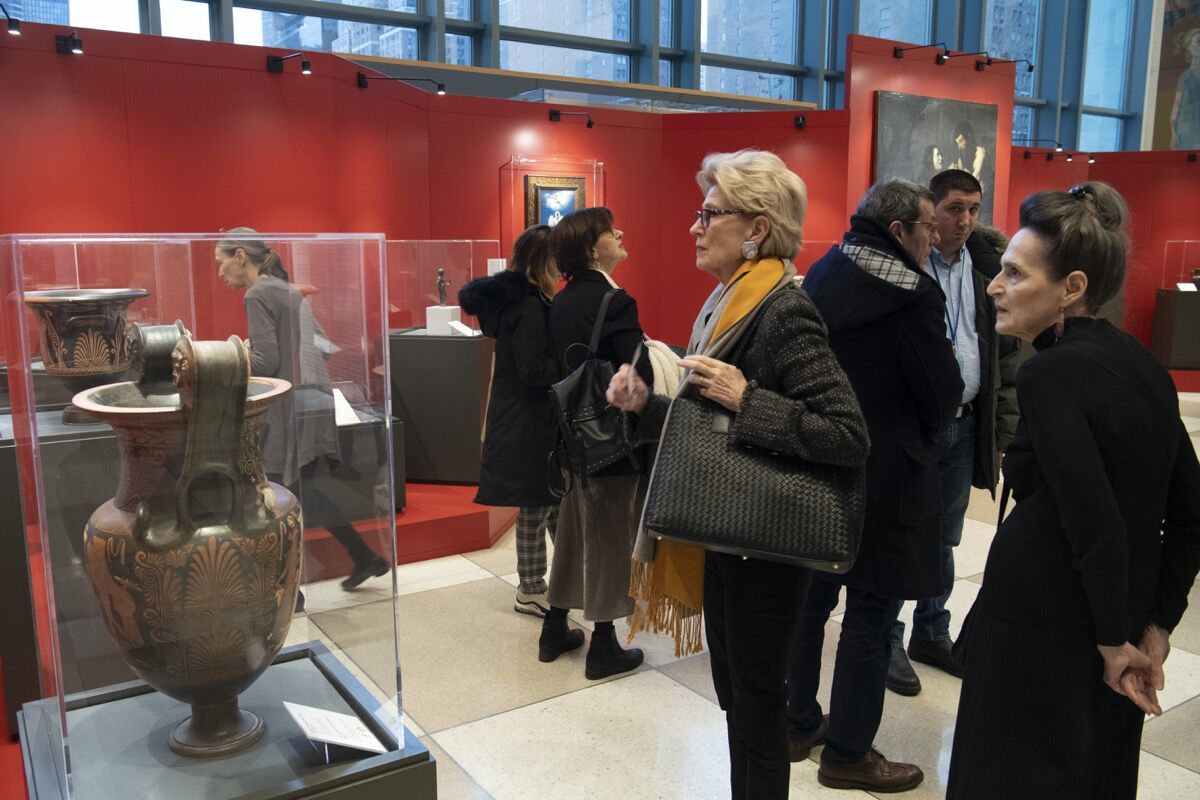 Opening ceremony of the exhibition "Recovered Treasures: The Art of Saving Art," organized by the Permanent Mission of Italy to the United Nations. Photo by Evan Schneider.

In honor of the TPC’s 50th anniversary in 2019, the Carabinieri, the Italian Ministry of Foreign Affairs and International Cooperation, and the Italian Ministry of Cultural Heritage and Activities organized an exhibition of recovered art. “Recovered Treasures: the Art of Saving Art” was on view in Paris this past fall and at the United Nations in New York earlier this month, and is scheduled to travel to Beijing later this year. The show illustrates the important work accomplished by the Art Crime Squad in recovering stolen works and safeguarding others. At the opening reception, the UN’s secretary general, António Guterres, emphasized the enormous value of the TPC’s work.
The exhibition features 15 works recovered by the Carabinieri, including ancient amphorae, a marble herm, Renaissance paintings, and an illuminated manuscript. Each piece carries with it a story of crime and eventual recovery by the TPC. Some of the pieces had appeared for sale at major auction houses or with well-known dealers and collectors, while other pieces have even appeared in museums. 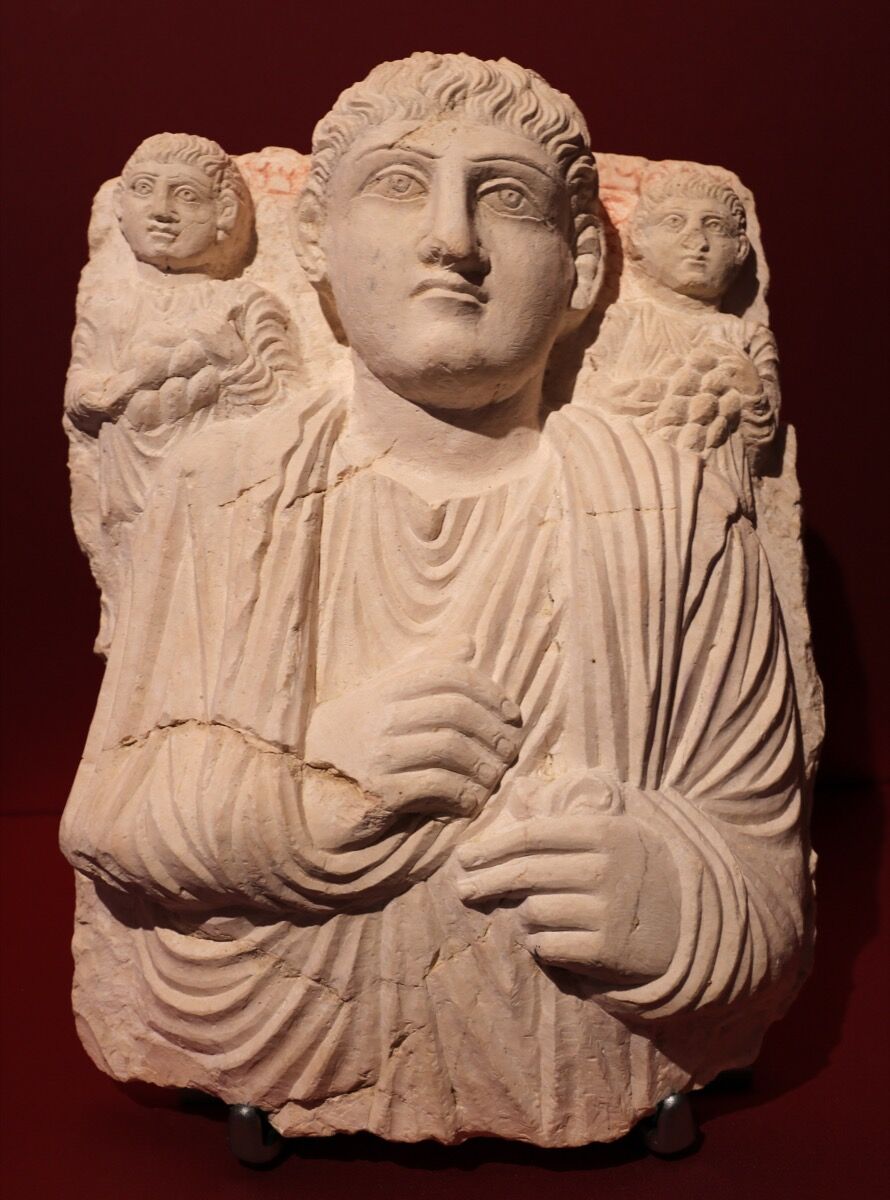 Funerary relief sculpture of a man and his two sons. Image via Wikimedia Common

In most cases, the possessors fought against returning the items to their rightful owners, whether they were private citizens or the Italian Republic itself. But in rare instances, the possessors cooperated with the TPC to return works to their rightful homes. For example, the 14th-century folio from an illuminated manuscript by Doge Andrea Dandolo was stolen in 1949 from the State Archives of Venice and illegally exported. It went missing for nearly seven decades. It was located in London in January 2019, during an inspection in the warehouses of a famous auction house. Upon receipt of the TPC’s formal request, the auction house returned the manuscript the following month during a ceremony at the Italian embassy in London.
Perhaps the most striking piece in the exhibition does not originate from Italy, but from the recently war-ravaged city of Palmyra. It is a stark reminder of wide-scale looting. The city of Palmyra, an oasis in the Syrian desert, was one of the most important cultural crossroads of the ancient world, and it is a UNESCO World Heritage Site. Unfortunately, ISIS enacted a systematic scheme of destruction and looting against the city. The marble piece in the exhibition is a funerary sculpture depicting a man and his two sons. The artifact was discovered as part of a money-laundering investigation. After smuggling it out of Syria, terrorists put it on the market. The TPC eventually found it in Piedmont in the possession of an Italian businessman who had bought it in 2016. As the object belongs to Syria, it will eventually be returned to that nation. However, Italian officials are collaborating with their Syrian colleagues to determine when the artifact can safely return home.
As guardians of mankind’s treasures around the globe, the TPC tirelessly works to protect our heritage. This small exhibition of 15 recovered pieces is not nearly large enough to celebrate the scale of the Carabinieri’s overwhelming task and its great successes, but it’s a start.
Leila Amineddoleh
Related Stories

How NFTs Have Empowered Artists in African Art Scenes 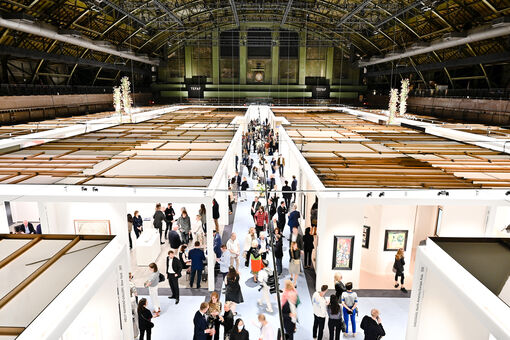 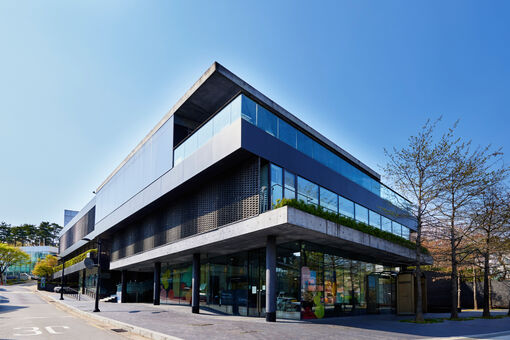 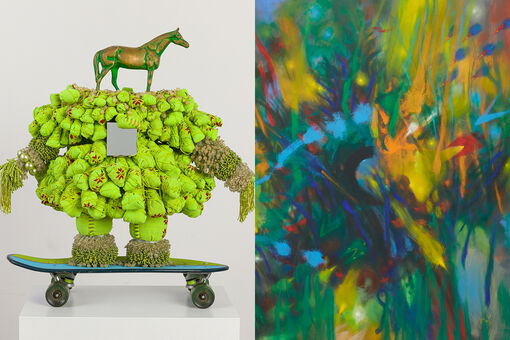 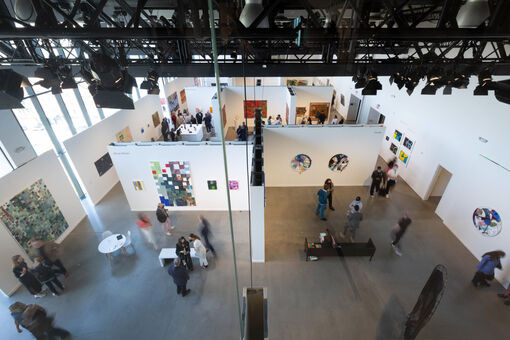