Jack Whitten withThe Guardian I, for Mary, Crete, 1983 or later. Photo by Paul Viani. Courtesy of the artist’s estate, Hauser & Wirth, and the Baltimore Museum of Art. 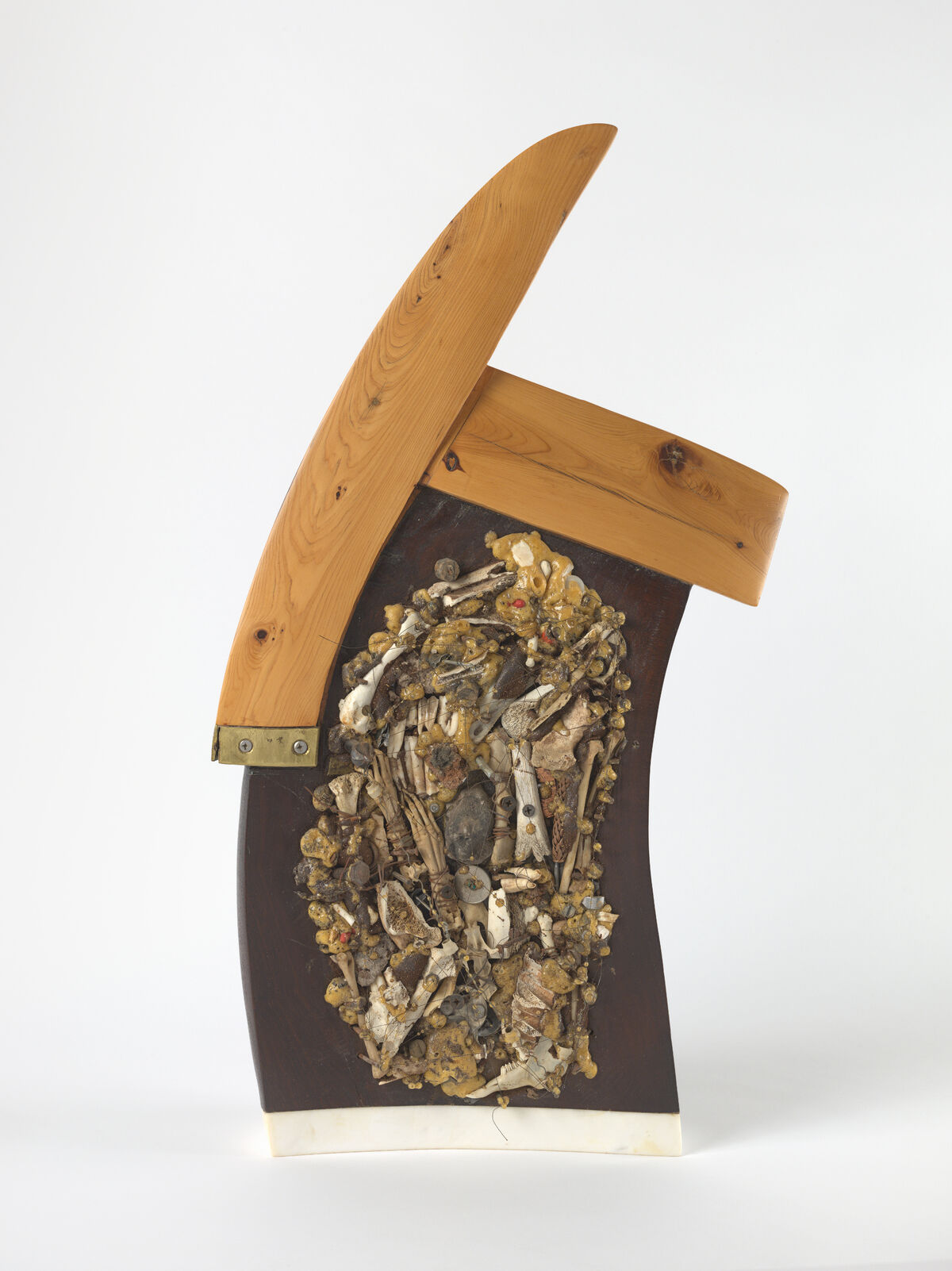 Jack Whitten, Tomb of Socrates, 2009. Photo by Genevieve Hanson, NYC. Courtesy of the artist’s estate, Hauser & Wirth, and the Baltimore Museum of Art.

“The biggest lesson I learned from
Jack Whitten
is that we sometimes ask too little of art,” said the curator Katy Siegel on Tuesday, at the preview of a new exhibition of the late artist’s sculpture at the Baltimore Museum of Art (BMA). The show arrives with the force of an “Afro-American thunderbolt,” to borrow from the title of one of Whitten’s works.
The beloved artist, who passed away earlier this year, was known for his groundbreaking paintings, works that have “rewritten the history of art,” Siegel said. (In the wake of his death, Whitten’s peers attested to the scope of his influence and achievements.) But in addition to his paintings, the artist had also been making sculptures for over five decades—dozens and dozens of fantastically inventive, soulful, often funny objects that are gorgeously, skillfully realized.
To Whitten, these were much more than carefully shaped assemblages of wood, nails, fish bones, and other materials: They were talismans and memorials; expressions of reverence to his ancestors; objects intended to create hope and to keep his family safe. They bring African and European cultural pasts together, rejecting the binaries of West and non-West. Indeed, they represent something like a loose roadmap for the future of humanity, offering some clues for how we might face the twin threats of technological and ecological crisis. 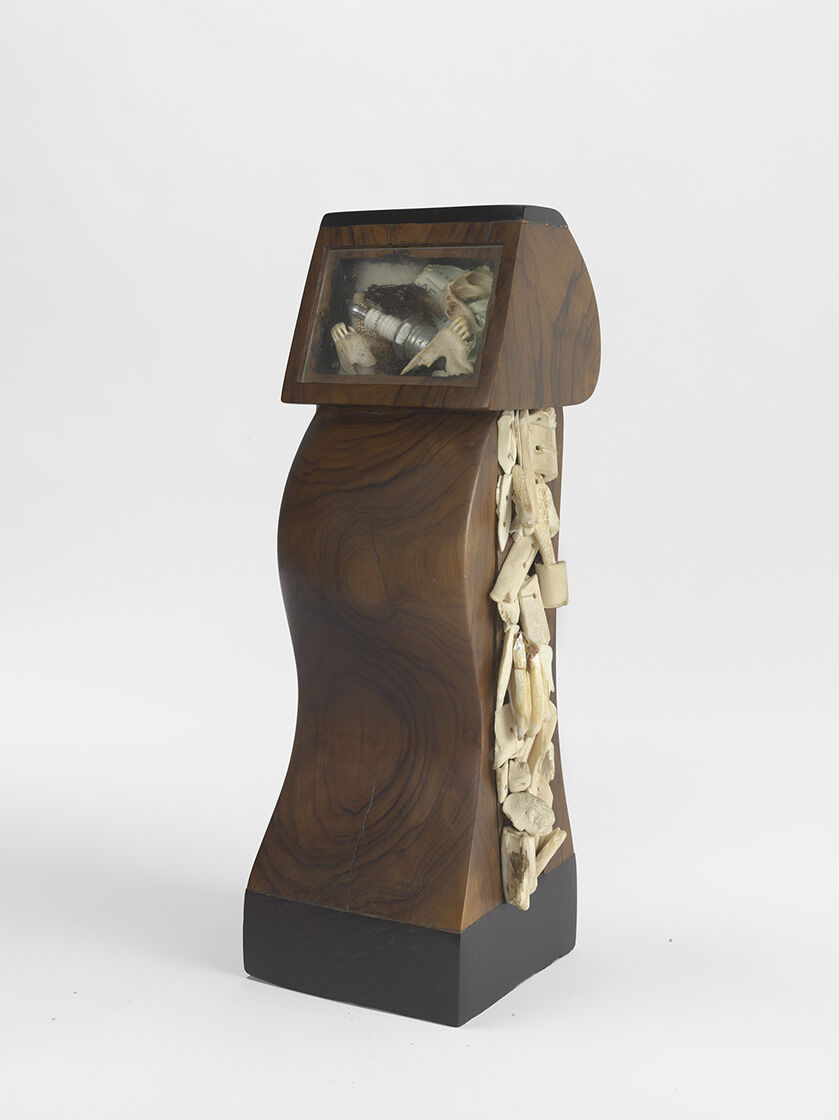 Yet, remarkably, this exhibition—which is co-curated by Kelly Baum and will travel to the Met Breuer this fall—marks the first time his sculpture has gone on public view in a gallery or museum. This is partly because the objects were personal to Whitten; he lived closely with them, and some performed a ritualistic function in his life. But the history of these sculptures (particularly the fact that they’ve remained out of view for so long) also tells a story of American racism.
Whitten, who was from Alabama, imagined that these bricolage forms might relegate him to the category of Southern “outsider” artist. He also felt in some way that the New York art world of the mid- to late 20th century—with its provincial rules and strictures—wasn’t ready to see contemporary objects that reflected his deep engagement with African art. Almost certainly, he was right.
It was outside of New York, on the island of Crete—where he summered with his wife Mary, who descended from Greeks, and their daughter Mirsini—that he found the freedom and closeness to nature needed to make most of these works. The influence of Greece and the natural world surface in many of the objects, and the history of African art also looms large. The close relationship between Whitten’s epic sculptures and his paintings is also illuminated in the exhibition’s finale, which showcases some of his most iconic “Black Monolith” canvases. (The name for the series was inspired by a monumental black stone that emerged from the landscape behind the artist’s home in Crete.)
4 Images
View Slideshow 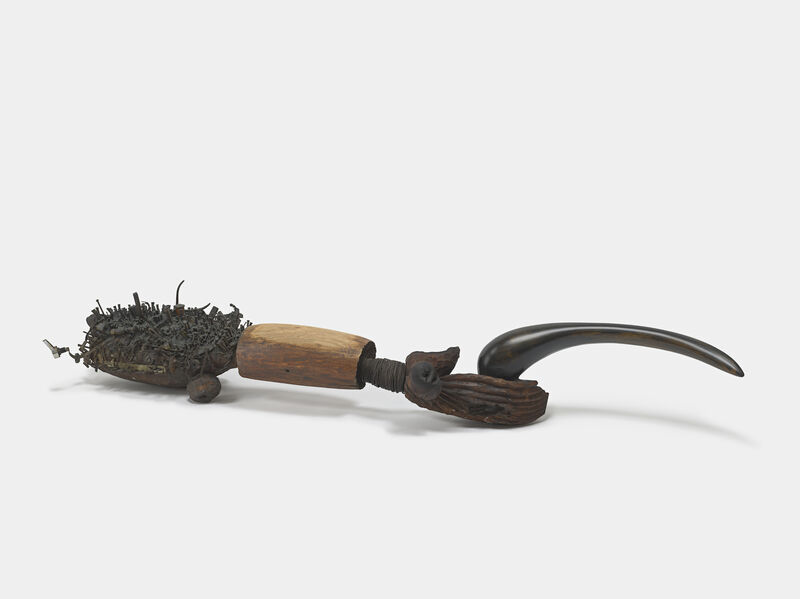 Advertisement
As with those paintings, Whitten’s sculptures often pay tribute to the deceased—whether human, animal, or plant. Homage to Malcolm (1965), in the museum’s first gallery, is a memorial to the Black Power icon Malcolm X. Resembling a potent relic, it’s presented at the BMA on the wooden table it once rested upon in the artist’s New York studio. The sculpture has a body of stained elm that is encrusted with nails and chains, and wrapped in coils of wire; it’s carved with rib-like gouges, charred with fire, and shaped into a sleek, pointed horn. The large form references Central African spirit figures and the dramatically asymmetrical headdresses of Mali.
Another sculpture, the aforementioned Afro-American Thunderbolt (1983–84), recalls the nkisi n’kondi power figures of the Congo (an original example of which is on view nearby in the gallery). The Thunderbolt is a geometric twist of black mulberry whose smooth surface alternates with thick clusters of bent nails, fusing modernism with spirituality. As the exhibition’s wall text states, the thunderbolt is meant to evoke the weapon of the Greek god Zeus, representing a marriage between European and African visual cultures.
Whitten first encountered African objects while living in New York, which he found in the encyclopedic collections of the Metropolitan Museum and the Brooklyn Museum, and it was in New York that he first began carving, in an effort to understand them. Bypassing the Western appropriation of African art, which divorced form from content—or “
Picasso
’s interruption,” as Whitten calls it in one of the log books he kept to jot down thoughts and ideas—he went in search of their meaning. “I knew there was something deeper than formal sensations,” he wrote in a text that appears in this show’s catalogue. “There was a ‘missing element’ that the
Cubists
did not penetrate.” Jack Whitten, Reliquary for Orfos, 1978. Photo by Genevieve Hanson. Courtesy of the artist’s estate, Hauser & Wirth, and the Baltimore Museum of Art. 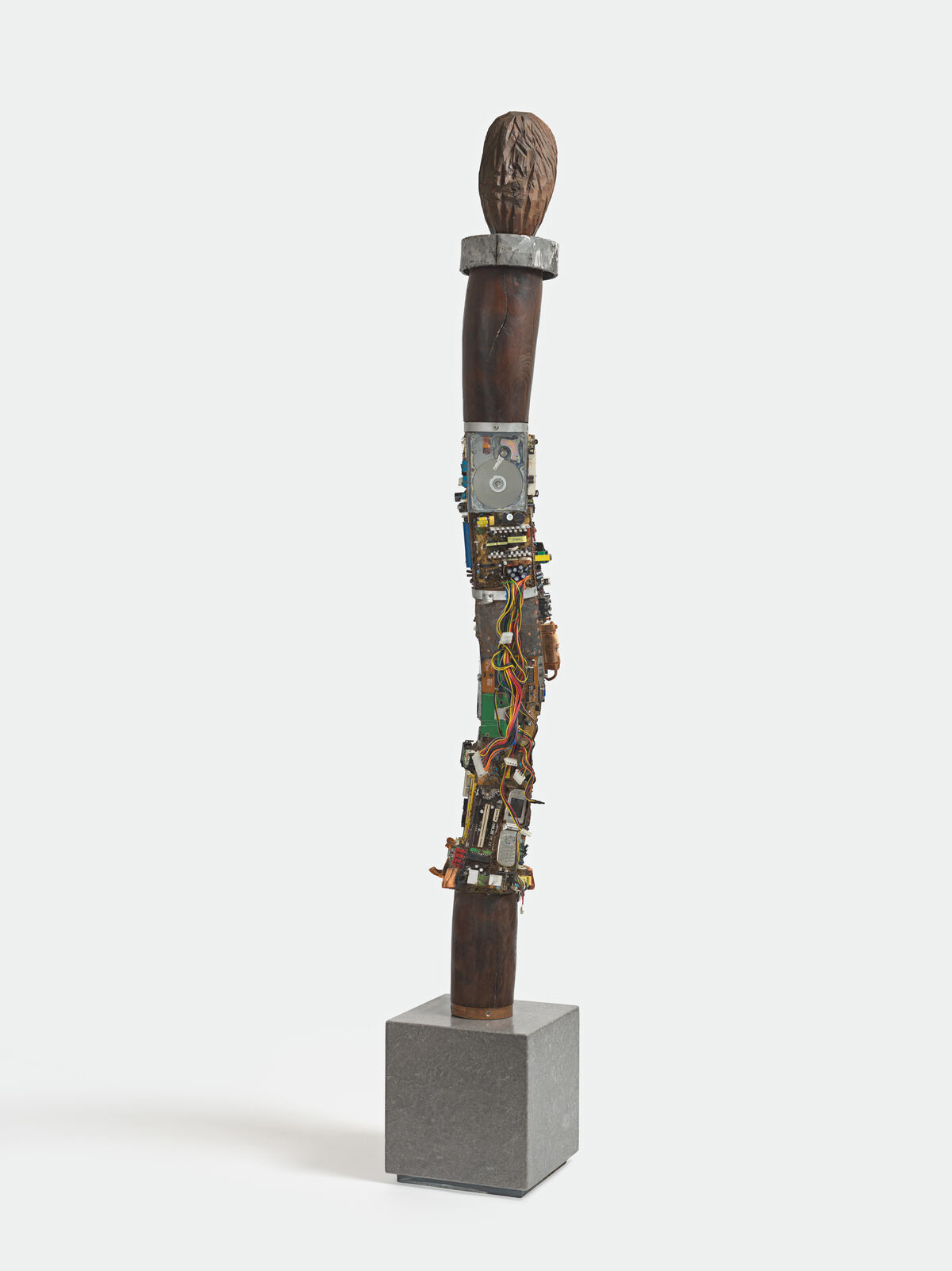 What he discovered in African art was the very “DNA of visual perception,” a language of geometry that “contained a cosmic worldview that has evolved through millennia,” he wrote.
That expansive, cosmic perspective manifests, in turn, in the cultural hybridity of Whitten’s work, which seems to grow even more dense in his “container” sculptures—modern reliquaries that house keepsakes, bones, and fragments of technological apparatus. Pregnant Owl (1983–84) is like a pint-sized grandfather clock possessed by a living spirit, with a puffed-out chest and a stripe of bone running down its side. Its form was inspired by Crete’s scops owl, and likely also by African and Christian reliquaries, as well as the craftsmanship of local Greek cabinetmakers. Its transparent face reveals the contents of its receptacle: fish teeth, a spark plug, and what might be a piece of dried seaweed.
Whitten was a skilled fisherman, and in several works, his great affinity for the sea is in plain view. Reliquary for Orfos (1978), its upright, slightly tilted posture recalling that of ancient Cycladic figures, houses the bones of the prehistoric-looking Orfos fish, which the artist hunted in underwater caves. The Death of Fishing (2007) is a requiem to the Greek village of Agia Galini’s defunct fishing industry, its slender, melancholic, canoe-like form holding a tangle of fishing nets, wire, and bones. It hangs from the ceiling, which, to Whitten, conveyed the appearance of a lynching. Whitten saw interconnected environmental, technological, and political crises looming—and while, in his art, he often reached back into the past, he also projected into the future, imagining how we could protect ourselves from ruin. In Technological Totem Pole (2013), the pole’s wooden form is embedded with parts of cellular telephones, chip cards, remote controls, and other paraphernalia of our digital age, uniting past and present. At the top, a basic clock is installed in the totem like a symbol of time travel, pointing toward the future.
“I would love to be able to dissolve all time zones and travel purely by light,” Whitten wrote in one of his log books. For the artist, who was both a lover of astrophysics and engaged with Christian spiritual traditions, the answers to our predicament lay in the lessons of the past as much as our advancing technological capabilities. Whitten saw in art the possibility of achieving this “higher consciousness,” and a means, it seems, to begin to repair the violent ruptures of history caused by Western modernism and European colonialism.
That possibility, and the deep humanity of these sculptures, make the Baltimore Museum’s show without doubt one of the most important and vital exhibitions of this year. See it, and let the artist enlarge your sense of what’s possible. “When consciousness expands,” Whitten wrote in his art log, “freedom expands.”
Tess Thackara
Related Stories 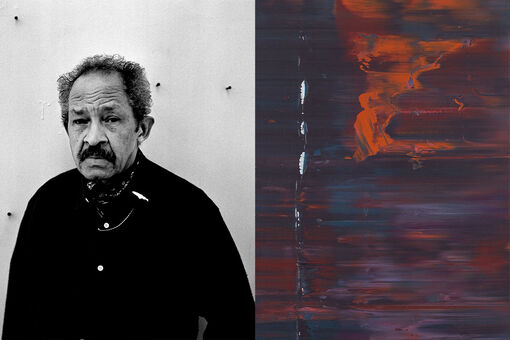