Jammie Holmes, the Artist Who Sent George Floyd’s Final Words across the Sky 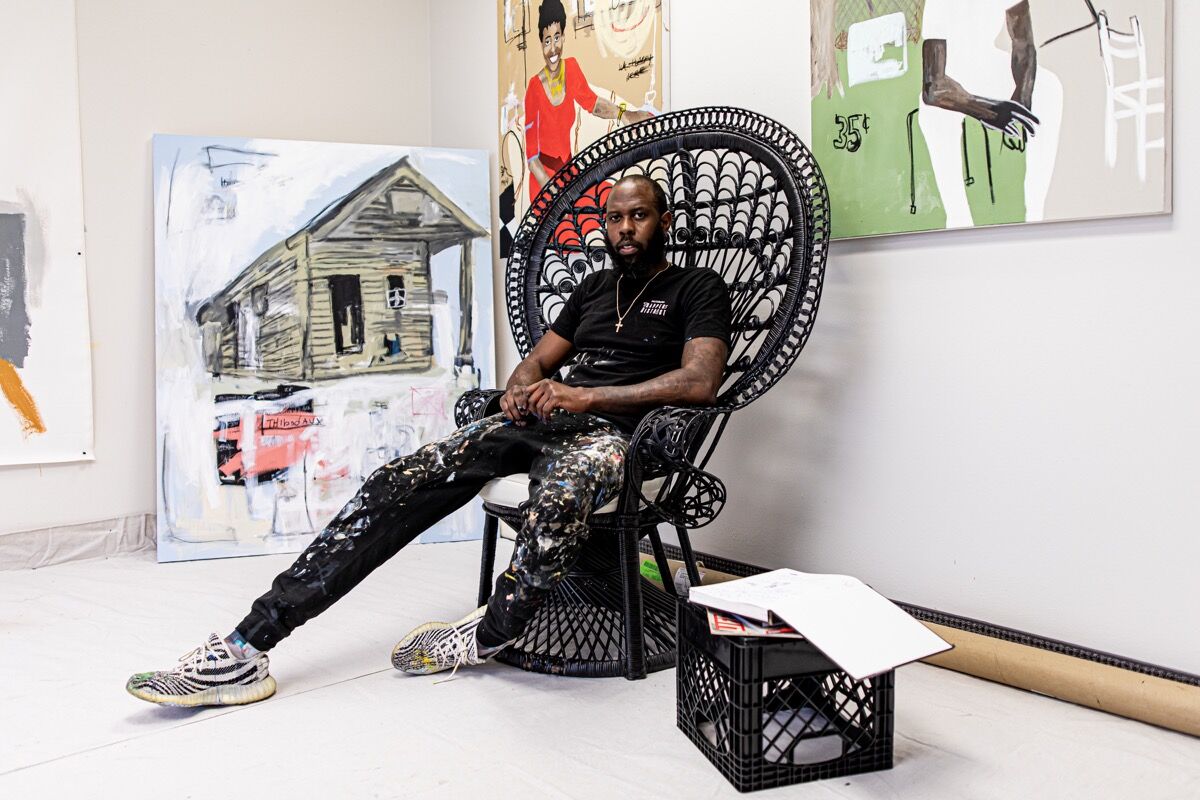 The Black, Dallas-based artist
Jammie Holmes
put George Floyd’s final words in a place where everyone could see them: the sky. Five days after Floyd was killed by a police officer in Minneapolis on Saturday, May 30th, Holmes’s piece took flight across Detroit, Miami, Dallas, Los Angeles, and New York. Airplanes carrying banners flew between the hours of 11:30 a.m. and 9 p.m. EDT. The words—like “They’re going to kill me” and “My neck hurts”—became impossible to overlook.
“I thought, because there is so much taking place on the ground, it only makes sense for something to happen in the sky,” Holmes said of the public art piece, titled They’re Going to Kill Me (2020), which was his first time working at such a scale. “Having George Floyd’s last words above the crowds allowed for a greater moment of silence, for peace, like when doves are released in the sky.” Holmes also put signs with Floyd’s final words on his website for the general public to print out and take to protests. “I saw it as a way to unify people. Even for those who would like to protest from farther away; if they couldn’t be on the ground, they could see the banner in the sky and participate in a larger movement.” 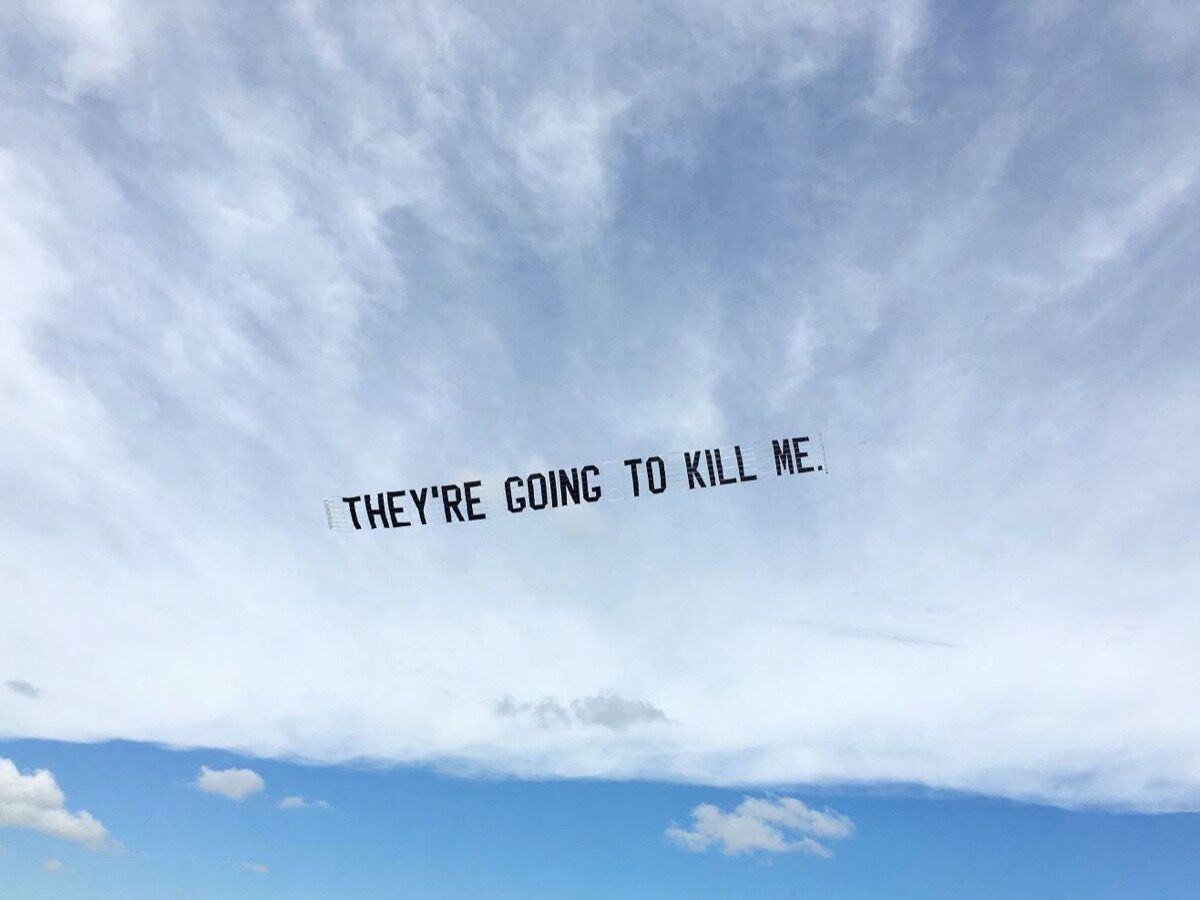 Today, June 16th, Holmes is opening a digital exhibition of his work titled “EVERYTHING HURTS.” through Dallas Contemporary, accessible via the museum’s website. The exhibition includes documentation of the original piece, as well as free programming, remote panels, and resources to inspire actions against systemic racism. And on June 20th, the work will feature in “Public Matter: Everything Hurts.,” a new show in downtown Detroit at Library Street Collective’s public art alley space, The Belt.
Floyd’s death struck a chord with Holmes because of the artist’s personal experiences with racialized policing. One night while driving to his mother’s house, he recalled, a narcotics agent stopped him. “Suddenly, there were three narcotics SUVs parked behind me and five in front. They pulled me over because of the type of car I was driving, and because I am Black,” Holmes said. “They illegally searched me and the car and made me stand with my hands behind my back. They took my driver’s license and one cop stared and stared at it, then gave it back and said, ‘Well, I know where to find you.’” 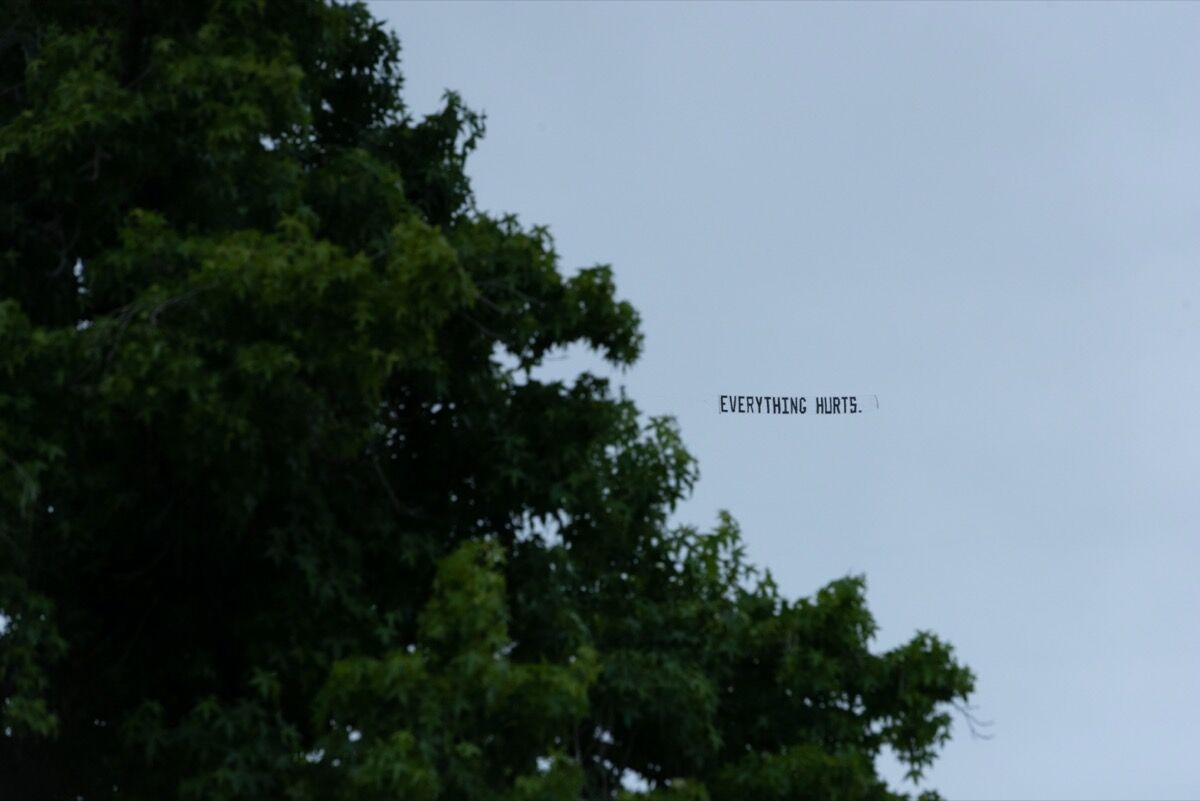 Advertisement
Holmes’s experiences with racism profoundly shape all aspects of his art practice. Although Holmes’s recent presentation made an impactful statement about race in America, this wasn’t the first time that he’s addressed the issue in his art. Holmes, who is originally from Thibodaux, Louisiana, often makes art about his version of the Black experience. He usually makes large, figurative paintings that depict Black life in Thibodaux.
“People have looked down on Louisiana for a long time,” Holmes said. “There is still this stereotype that the people in Louisiana are uneducated, and our art is rarely taken seriously. As an example, one of our most famous artists,
Clementine Hunter
, is labeled as ‘folk.’ I wanted to change this perception that people have.” 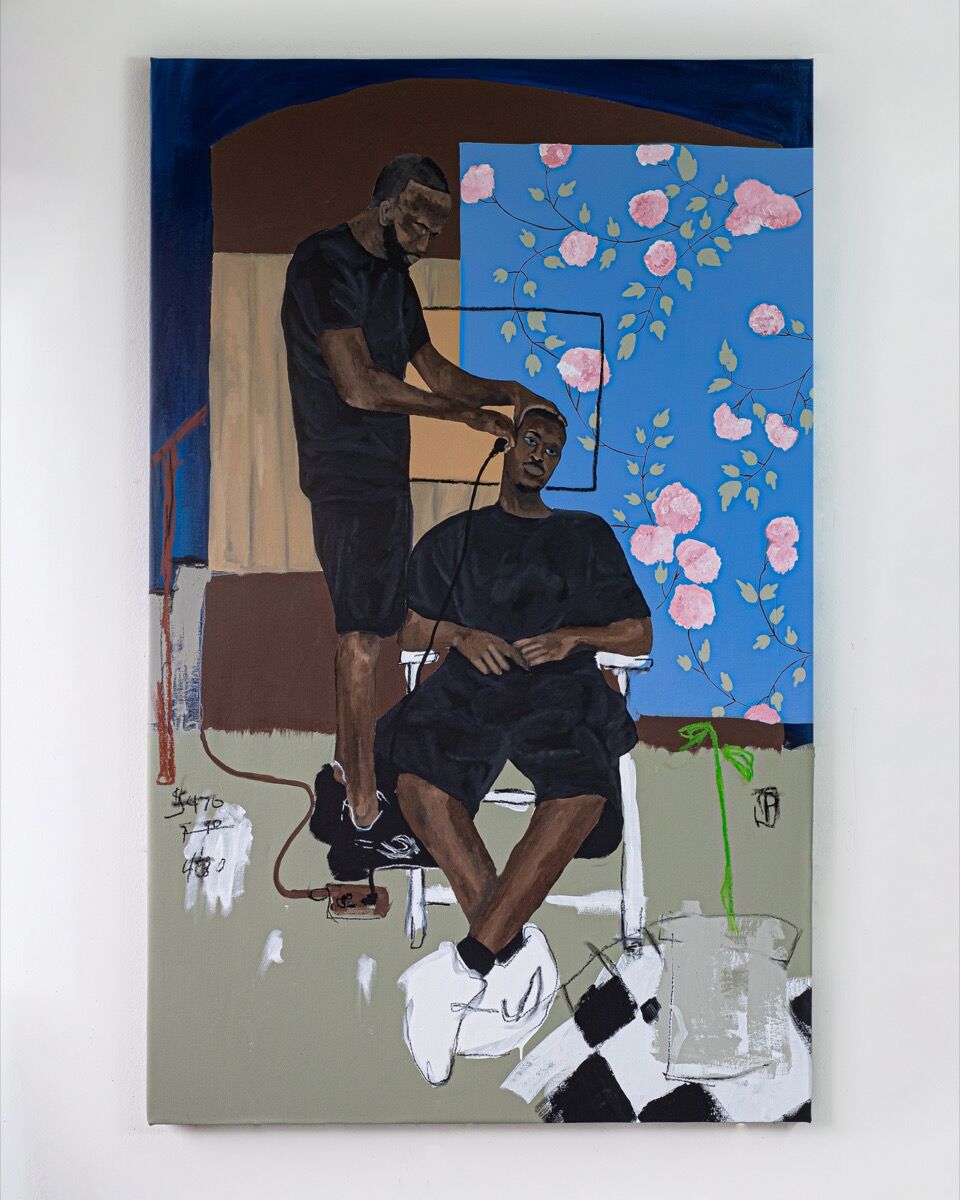 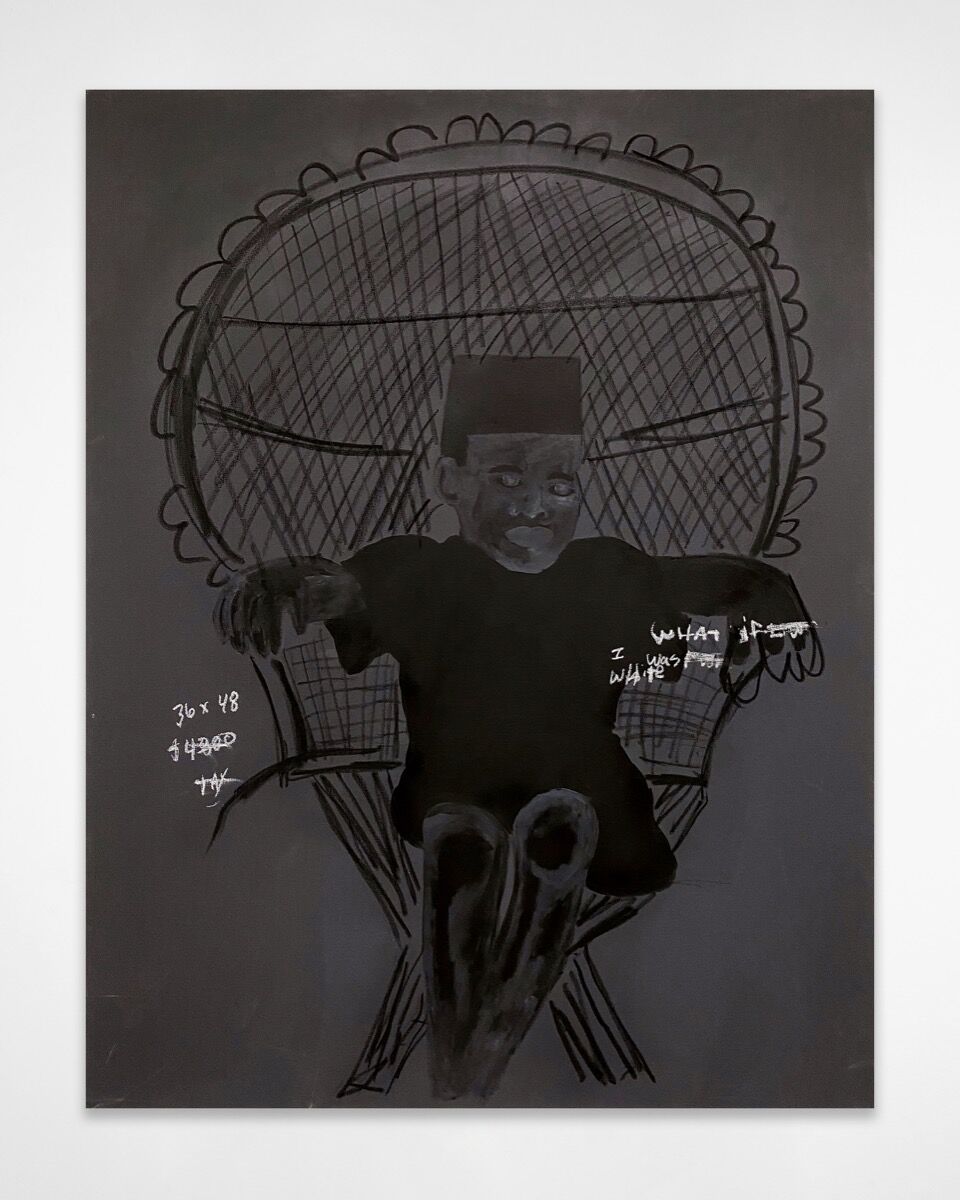 Jammie Holmes, Growing up in darkness 2, 2019. Courtesy of the artist and Library Street Collective.

Many of his paintings depict tender moments. Sometimes, he shows lone figures gazing off into space during a moment of reflection. Other paintings show people interacting in loving ways. Endurance (2020) shows Holmes shaving his younger brother’s head with a pair of clippers; pink flowers and rounded, abstract forms float in the background. Both men in the picture seem calm; it’s evident that they share a close bond. The painting challenges the commonly held conception that Black men are hypermasculine, showing the viewer a precious instance where two brothers express familial affection.
“I wanted…an example for a Black narrative that is different from that of the ‘angry Black man.’ I painted us on the street where we grew up, and I added the floral background to show softness and love,” Holmes said of the painting. “The title of the work, Endurance, means that no matter the shit that was thrown at us as Black men, I’m still here, and I am still the same person cutting my brother’s hair at home.” 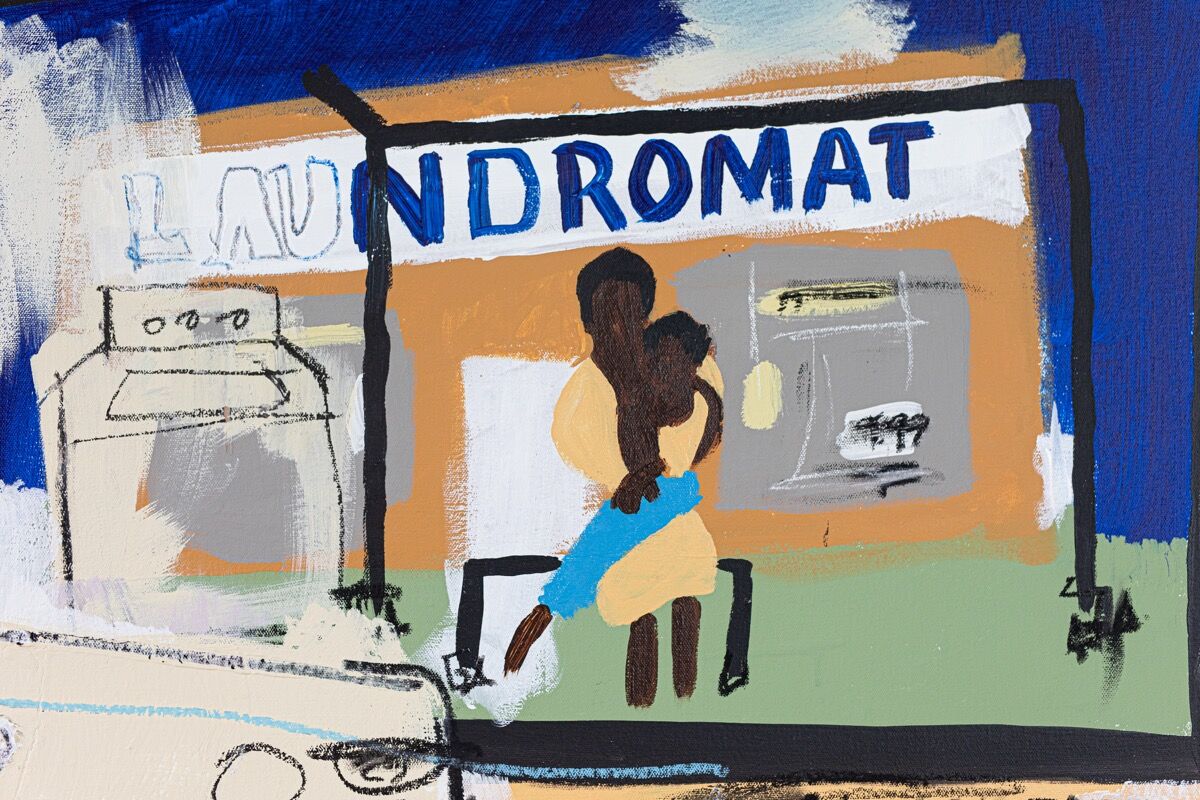 Some of Holmes’s other paintings focus on depictions of Black women. Mama Raised Me (2020) shows his mother smiling at the viewer; she appears content and relaxed, angling her body towards us in an open position.
“When I paint pictures of Black women, I try to show the power that women hold,” Holmes said. “I was raised only by women, and I admire them because they have so much endurance. I’ve seen these Black women go to hell and back, battling for wages, being beaten, and so when I paint them, I want to give them the spotlight they deserve.”
In the future, Holmes plans to further the ideas and discussions he addressed through They’re Going to Kill Me. “I am excited that these images of the project will be exhibited in The Belt alley,” Holmes said of the forthcoming show in Detroit. “Installing them in an open, public alley keeps the work accessible and enables the community to reflect once again on systemic racism, and how we can move forward for change.”
Isis Davis-Marks
Related Stories