Jannis Kounellis, Arte Povera Icon, Dead at 80—and the 9 Other Biggest News Stories This Week

01  Jannis Kounellis, a major figure of the Arte Povera movement, has died at the age of 80.

(via The Art Newspaper and ARTnews)

Kounellis
died on February 16th at Rome’s Villa Mafalda hospital, according to the Italian Ministry of Cultural Heritage and Activities and Tourism. Though born in Greece, Kounellis spent most of his life in the Italian capital, where he worked with fellow avant garde artists and received his first solo exhibition in 1960. A titan of the
Arte Povera
movement, which employed common or everyday materials, Kounellis is credited with inventive and playful use of a diversity of objects—everything from jute bags to a dozen live horses. The re-staging of Kounellis’s famous equine-based work by Gavin Brown’s enterprise in New York in 2015 attracted both praise and controversy as the living horses drew large crowds to the gallery space. Kounellis received numerous major museum exhibitions throughout the course of his life, including at the Tate in London, and his work has also made regular appearances at the Venice Biennale. In the gallery text for a 1987 exhibition, Kounellis wrote of his work: “I saw the sanctity of everyday objects.”

02  Photographer Burhan Ozbilici has won The World Press Photo of the Year award for his image taken immediately after the assassination of the Russian ambassador to Turkey.

(via the World Press Photo Foundation)
The World Press Photo Foundation administers the award, which is in its 60th year and is given to the photograph that “captures or represents an event or issue of great journalistic importance.” Ozbilici’s image, which also won in the Spot News Stories category, pictures the off-duty policeman just seconds after shooting Russian ambassador Andrei Karlov in Ankara. The killing took place in an art gallery and the powerful image of the event quickly went viral. The winning photograph was chosen from 80,408 images submitted by 5,034 photographers from 125 countries. “It was a very very difficult decision, but in the end we felt that the picture of the year was an explosive image that really spoke to the hatred of our times,” said Mary F. Calvert, a member of the jury. “Every time it came on the screen you almost had to move back because it’s such an explosive image and we really felt that it epitomizes the definition of what the World Press Photo of the Year is and means.”

03  In protest of President Donald Trump’s travel ban, the Davis Museum at Wellesley College has taken down 120 works either made or donated by immigrants.

(Artsy)
This new initiative, titled “Art-Less,” runs from February 16th to 21st and highlights the artistic contributions of American immigrants. It also marks the latest art-world protest against Trump’s January 27th executive order, which temporarily prevented visitors from seven Muslim-majority countries from entering the U.S. Although lower courts have blocked the travel ban indefinitely, Trump has responded by saying that his team will soon file a “brand-new order” to achieve the same goal. At the Davis, each of the works’ labels will be marked with a tag that reads either “made by an immigrant” or “given by an immigrant.” On the list is Dutch-born
Willem de Kooning
, Canadian-born
Agnes Martin
, Cuban-born
Ana Mendieta
, and English-born
Thomas Cole
, among others. “I think visitors will have a profound awareness of the enormous contribution that immigrants have made, even just within this building, and extrapolate from that,” the director of the Davis, Lisa Fischman, told Artsy.

04  Archaeologists working in Luxor stumbled upon a 3,000-year-old tomb of an Egyptian scribe, filled with remarkably well-preserved carvings and paintings.

(via LiveScience)
The researchers were removing debris from another tomb—that of an Egyptian official who served King Tut’s grandfather, Amenhotep III—when they discovered a hole in the wall. This opening led to a T-shaped chamber, the final resting place of a man named Khonsu. A “renowned” royal scribe during his lifetime, Khonsu and his wife are depicted worshipping the gods Isis and Osiris in a painting on one of the tomb’s walls. A separate carving shows four baboons in awe of the sun god, Ra. The team of archeologists, led by Jiro Kondo of Waseda University in Japan, have not yet gained access to the tomb’s inner chamber, which is blocked by piles of stones. This marks the most recent discovery to come out of the necropolis at ancient Thebes, located in modern-day Luxor alongside the Nile River.

05  After Anselm Kiefer disavowed a Beijing exhibition of his works, the show’s curator has fired back against the artist and his dealers.

(via The Art Newspaper)
The Kiefer show at the Central Academy of Fine Arts Museum (CAFAM) in Beijing attracted controversy last year when the artist said it was being prepared against his wishes. The Western galleries that represent Kiefer—White Cube, Gagosian Gallery, and Galerie Thaddaeus Ropac—backed the artist and issued a statement declaring that “to plan such an important showcase in China without the artist’s input is disrespectful.” But now, the show’s curator Beate Reifenscheid is alleging that the dealers and the artist are impinging on curatorial freedom. “Curators must respect the artist but also be able to work for the wider public’s benefit,” she said. “If all artists and their art dealers could control when, where and why their art is displayed in museums after it’s sold, the public interest would not be fully served.” The exhibition was originally organized as a joint venture between CAFAM and the Bell Art Center, which fosters cultural exchange between Asia and Europe. A spokesman for the latter said that the objections of the dealers demonstrate “a classic case of how commercial interests in the art world can overreach and of how the profit motive seeks to control and restrain curatorial freedom.” The exhibition was originally slated to travel to other locations in China, though it is unclear if those plans will proceed.

(via Artforum)
The bill will increase financial support to the Percent for Art program, which mandates that certain funds for any public-facing, city-funded development be allocated for public art. The rule previously required that one percent of the first $20 million of capital projects (the construction of a building with a public space, for example) be allocated to public art. The new law increases that number to one percent of the first $50 million of such projects and improves the public feedback process. The bill will also foster diversity in the Percent for Art panels, which oversee the program, requiring more input from local communities. This is the first time the city council has passed legislation dealing with cultural issues since  the Department of Cultural Affairs was established in 1976.

07  A foundation in Cologne is challenging Hauser & Wirth’s claim to the estate of August Sander.

(via artnet News)
Just five days after the gallery Hauser & Wirth announced it now represents the estate of the late German photographer
August Sander
, Cologne’s SK Stiftung Kultur (SK Culture Foundation) shot back with a statement claiming that it is the only legitimate representative of the estate. On February 9th, Hauser & Wirth had released a statement about the representation, describing it as a collaboration with the artist’s great-grandson Julian Sander (who runs a gallery in Cologne). But on February 14th, SK Stiftung Kultur responded with “incomprehension,” and outlined the history of the existing estate’s founding, which occurred in December 1992. The foundation claims the estate was arranged in accordance with the seller Gerd Sander, the grandson of the photographer and father of Julian Sander. In a piece appearing in the German magazine Monopol this week, Julian Sander explained that the photographic works included in the estate represented by Hauser & Wirth were still in the family’s possession, whereas the SK Stiftung Kultur, which is a non-profit, is not responsible for the sale of works on the global art market. Hauser & Wirth has not commented on the foundation’s claims.

08  A new pro-immigration art installation in Dresden resulted in far-right protests in the city.

(via Artforum)
The work, Lampedusa 361, was produced jointly by the city and the organization Friends of Dresden Germany. It resembles a cemetery, made up of 90 styrofoam tombstones with photographs of graves in Sicily where refugees who drowned are buried, and is meant to recall those who lost their lives during World War II in Dresden. It was erected at Theaterplatz, before the Semperoper, as part of a series of events to commemorate the city’s destruction during World War II. The work incited mass protests of the rightist, anti-Islam, nationalist group PEGIDA (the Patriotic Europeans Against the Islamisation of the West). Dresden mayor Dirk Hilbert was denounced by protesters and has received death threats but remains defiant. “It is a memorial at the right time in the right place,” said Hilbert during Lampedusa 361’s unveiling. Artistic directors of 16 Dresden cultural institutions issued a statement denouncing the demonstrations; an excerpt reads, “In the history of our country there have always been times when the common good was endangered by narrow-minded hate speech and demagogues.”

09  A German court has ruled that a convent must continue to display a Nazi artist’s work.

(via The Art Newspaper)
Erich Klahn’s commissions for churches included Nazi and Germanic symbols, including swastikas and runes. After discovering Klahn’s Nazi sympathies, the Klosterkammer Hannover (the public body that oversees former church property) tried to cancel a contract that it had to maintain and exhibit his work. His heirs challenged this breach of contract in court, and the Federal Court of Justice, the country’s highest court, rejected the appeal from the Klosterkammer in January. The director of the Klosterkammer told The Art Newspaper that they are “looking at what further steps we can take,” but for now they plan to reopen a museum of Klahn’s work in April.

10  Moscow’s Garage Museum has released the artist list for its inaugural Russia Triennial.

(via ARTnews)
The museum will include 63 artists and collectives in the first Garage Triennial of Russian Contemporary Art, just three weeks ahead of its opening, on March 10th. A team of six curators, helmed by the museum’s chief curator Kate Fowle, traveled to 42 cities and towns in Russia in order to arrive at a list of “some of the most active and influential cultural figures” in the country, according to a statement. All the works included have been created in the past five years. The exhibition, opening in a year that marks the 100th anniversary of the Russian Revolution, will be arranged according to a series of themes: Master Figure, Personal Mythologies, Fidelity to Place, Common Language, Art in Action, Street Morphology, and Local Histories of Art. Founded by Dasha Zhukova and Roman Abramovich in 2008, the Garage Museum is invested in supporting what it considers to be an underexplored contemporary art scene—the institution has also produced an online catalogue of Russian artists and local scenes.
Artsy Editors
Cover image: Installation view of Jannis Kounellis’s Da inventare sul posto (To Invent on the Spot) at Luxemboug & Dayan’s booth at Art Basel, 2016. Photo by Benjamin Westoby for Artsy.
Related Stories

The Most Powerful Moments of Photojournalism in 2016 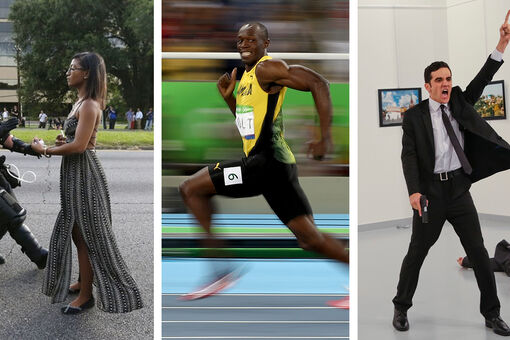 The Most Powerful Moments of Photojournalism in 2016
Molly Gottschalk
Dec 21, 2016 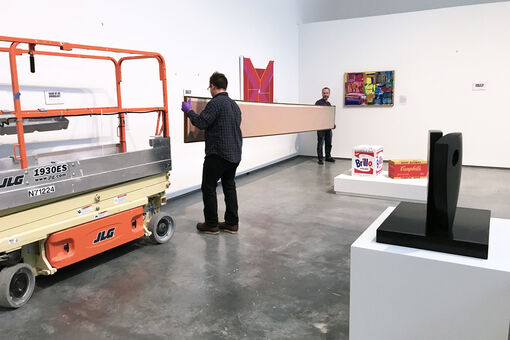