Makoto Azuma is Pushing the Boundaries of Botanical Sculpture 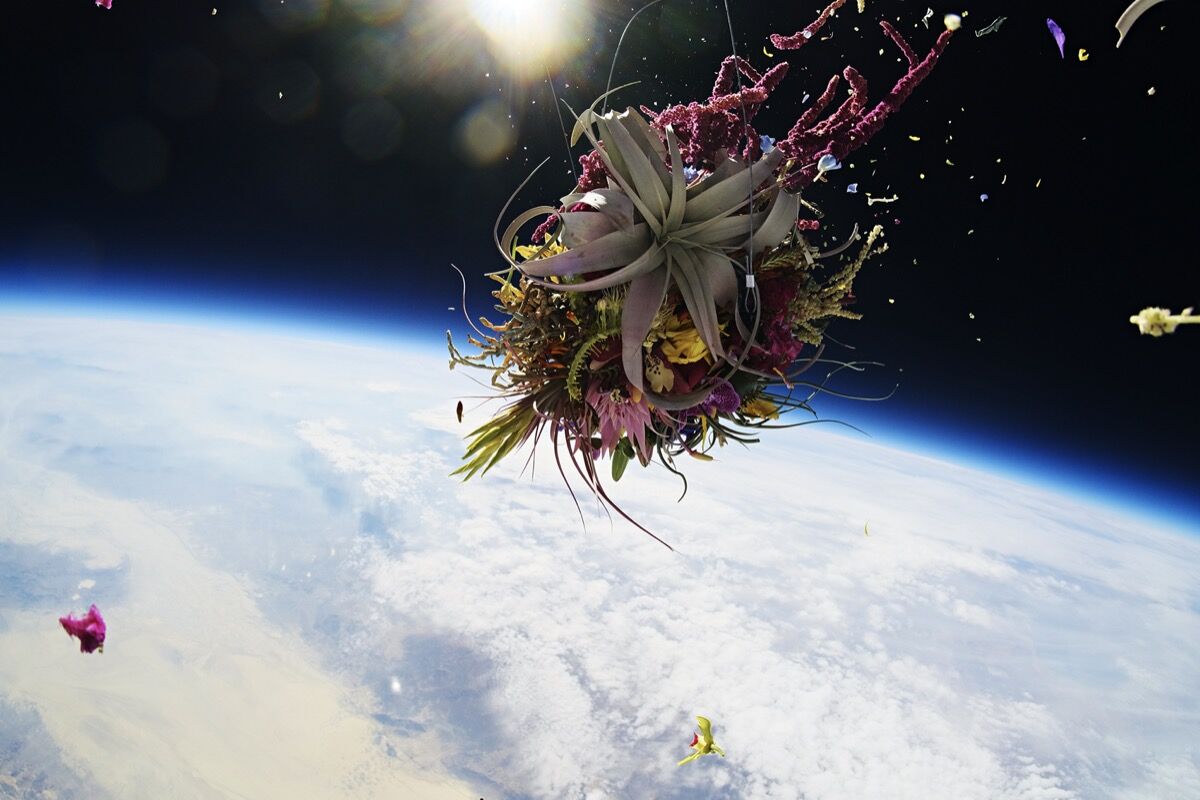 Azuma Makoto, In Bloom #1 EXOBIOTANICA I— BOTANICAL SPACE FLIGHT, in Nevada, 2014. Photo by Shiinoki Shunsuke. Courtesy of the artist and AMKK.

In 2017, florist and artist
Makoto Azuma
sent a bouquet of flowers into the stratosphere for the second time. Suspended at 30,000 meters above the Earth’s surface, a medium-format camera captured the vibrant 13-pound arrangement that included pink orchids, red lilies, and sunflowers as it met its new subzero, oxygenless environment. Against the black expanse of space, the installation, titled EXOBIOTANICA II, was a burst of life far from home.
“Plants on the ground are rooted in the soil, under the control of gravity,” writes art critic Satoshi Koganezawa in the new book Flower Art: Makoto Azuma (2020). “But if this link to life is removed, what kind of beauty could be born?”
Azuma, who founded the high-end store Jardins des Fleurs in Tokyo in 2002, began staging ambitious feats of flower art under the experimental studio–cum–research institute called Azuma Makoto Kaju Kenkyujo (AMKK) in 2008. Since then, he has frozen floral sculptures in blocks of ice, built complex steel frame grids housing a multitude of flora, and created blooming fields of land art where the death of the flowers is as important to the project as their vibrant arrangement. 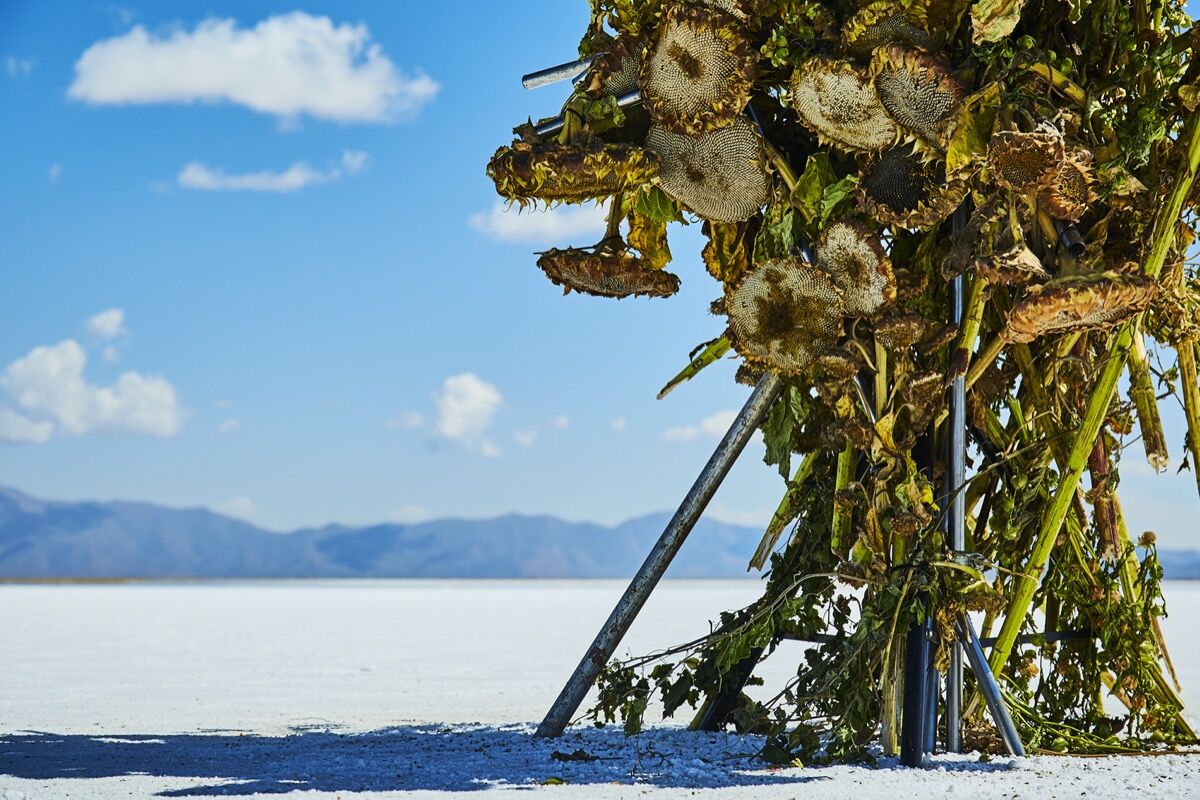 A sense of fantasy runs throughout Azuma’s work, made capable by massive undertakings of science and engineering. Many of his projects can only be experienced through photos. Smaller works, like Shiki I (2005), in which a pine tree was suspended in a steel cube, have seen multiple iterations, installed everywhere from remote deserts to a Barneys store.
Flower Art surveys each of Azuma’s projects since 2012, all of which start with the flower. “Each work of mine focuses specifically on the flower itself,” he said over a translated email. “Instead of seeking for an artistic expression, I appreciate my encounter with the flower, spend some time face-to-face with it and try to listen to its voice.” 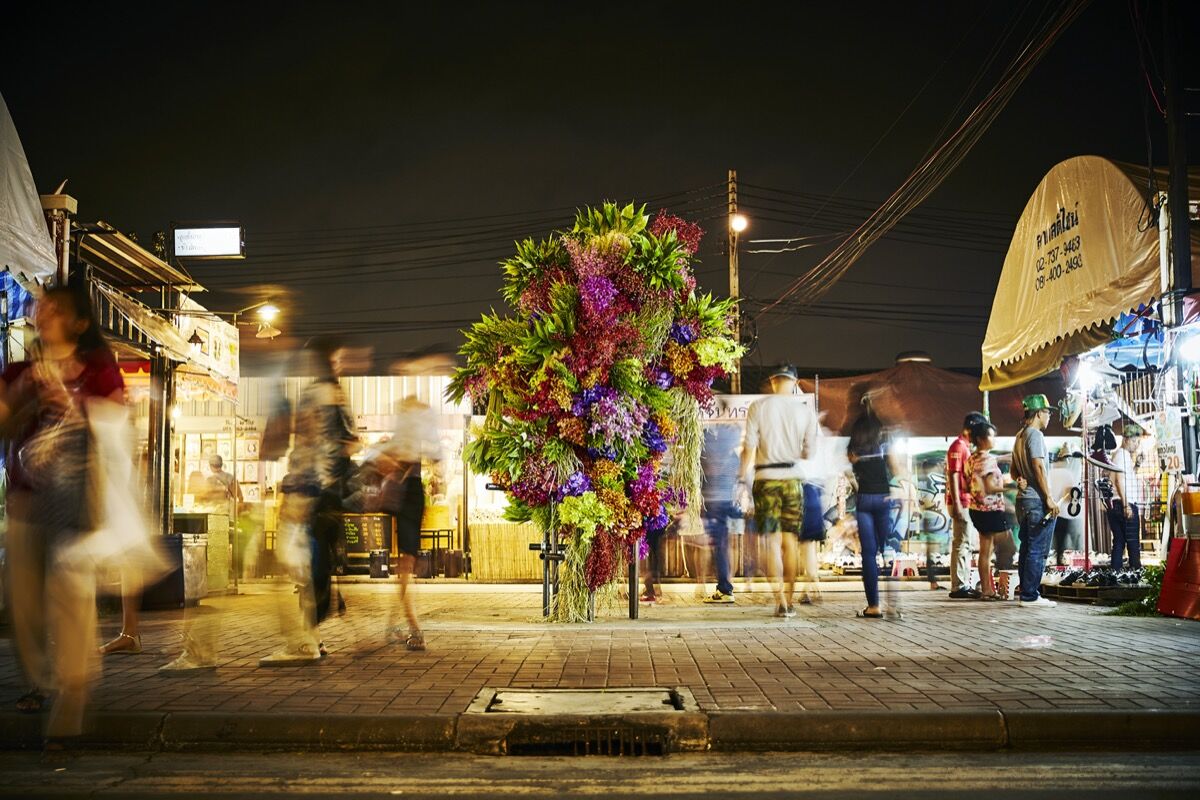 Advertisement
Azuma originally moved to Tokyo in 1997 with dreams of becoming a rock star. (Music features in his artworks too: Japanese rock band Hakata CYCOS and American rock band Algiers have played live performances for his multisensory installations.) But his sights changed when he began working in a flower shop and experienced Tokyo’s bustling flower markets as a trader. It was a three-week trip to the Amazon sourcing local plants and flowers in 2013 that changed his perspective entirely.
“Everything was new and shocking,” he said. “I saw countless insects swarming to a beautiful flower—it was so beautiful that I cannot express it with words. I saw a parasitic plant wrap itself around a big, 300-year-old tree and push it to the ground. It was astonishing. I felt the law of nature directly and realized once again that there is a beauty that cannot be fabricated by humans.” 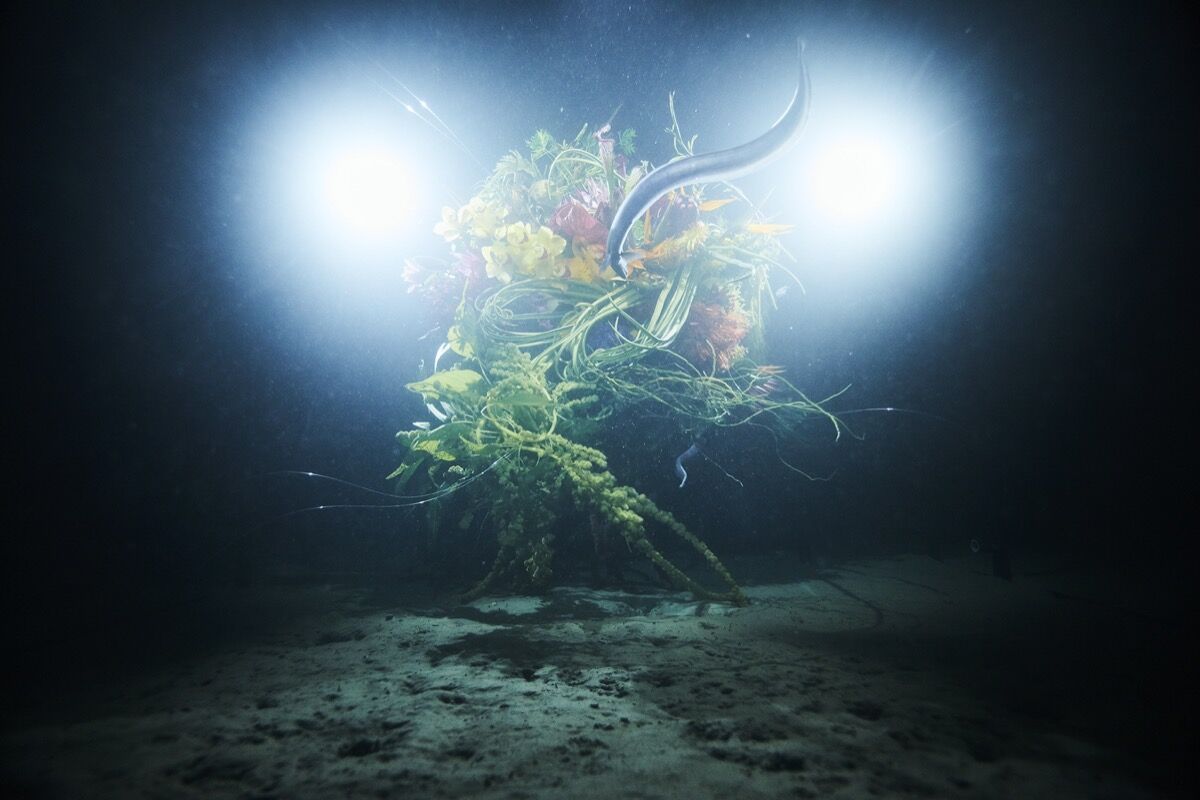 Azuma Makoto, In Bloom #3: SEPHIROTHIC FLOWER: Diving into the Unknown, in Suruga Bay, 2017. Photo by Shiinoki Shunsuke. Courtesy of the artist and AMKK.

Azuma may not be able to rival the singular beauty of nature, but he does give his flowers alternative lives in improbable places. As part of the “In Bloom” series, which included EXOBIOTANICA II (and its predecessor, EXOBIOTANICA I), he and his team submerged around 100 varieties of blooms deep in Suruga Bay, at the base of Mount Fuji, while a remotely operated vehicle took photographs. “Despite the high water pressure, the flowers largely retained their shapes,” the book notes. “In fact, being underwater actually emphasized their forms. When brought back to the surface, the flowers had intensified in color and hardened like plastic.”
“The strength of flowers is totally beyond our imagination,” Azuma said. “We were always surprised by their possibilities.”
There’s a duality to many of his works: a bouquet in the vacuum of space, where life can’t exist, versus at the bottom of the sea, where life on Earth began. In another pair of projects, Azuma’s team poured streams of water over a several-foot-tall arrangement in an icy peninsula of Hokkaido, turning a floral sculpture into one of ice. He also arranged roughly 10,000 red heliconia flowers on a raft, floating in the ocean. Side by side, images of the sculptures appear like stooped creatures, one of the sea and one of the frost. 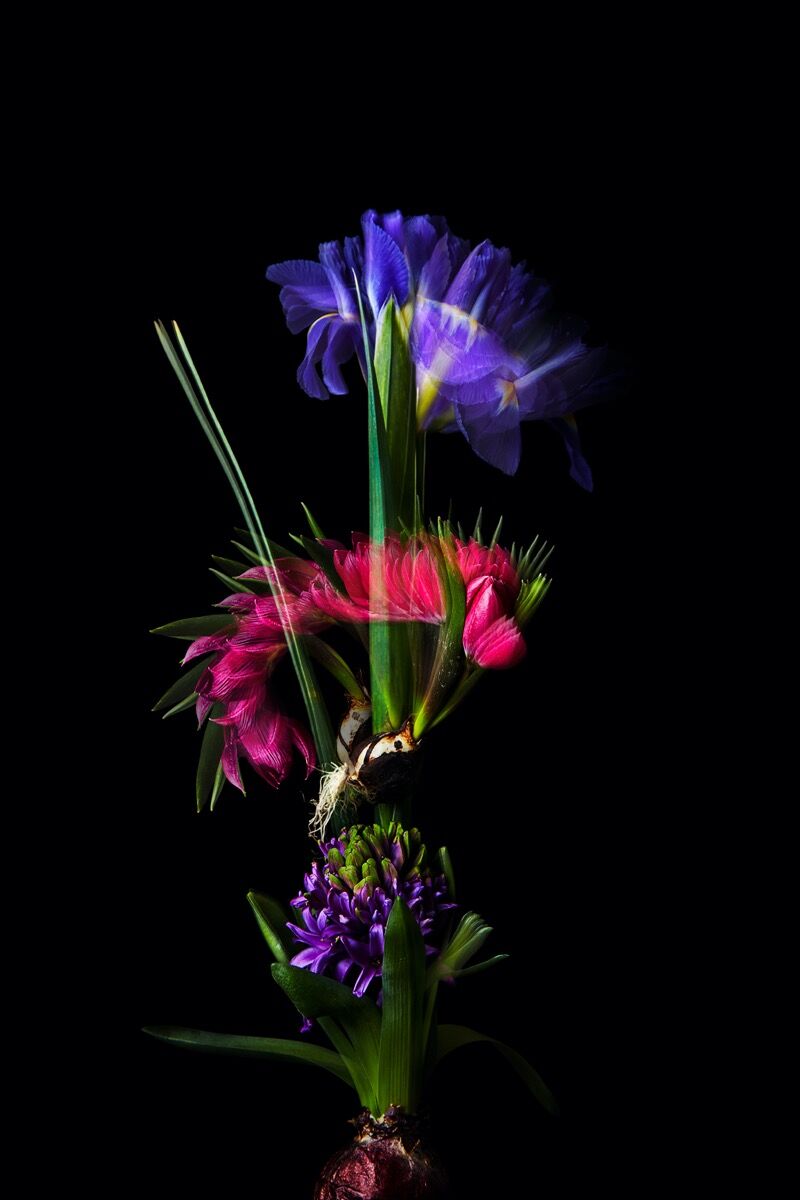 Azuma Makoto, Shouting Flowers, in Tokyo, 2017. Photo by Shiinoki Shunsuke. Courtesy of the artist and AMKK. 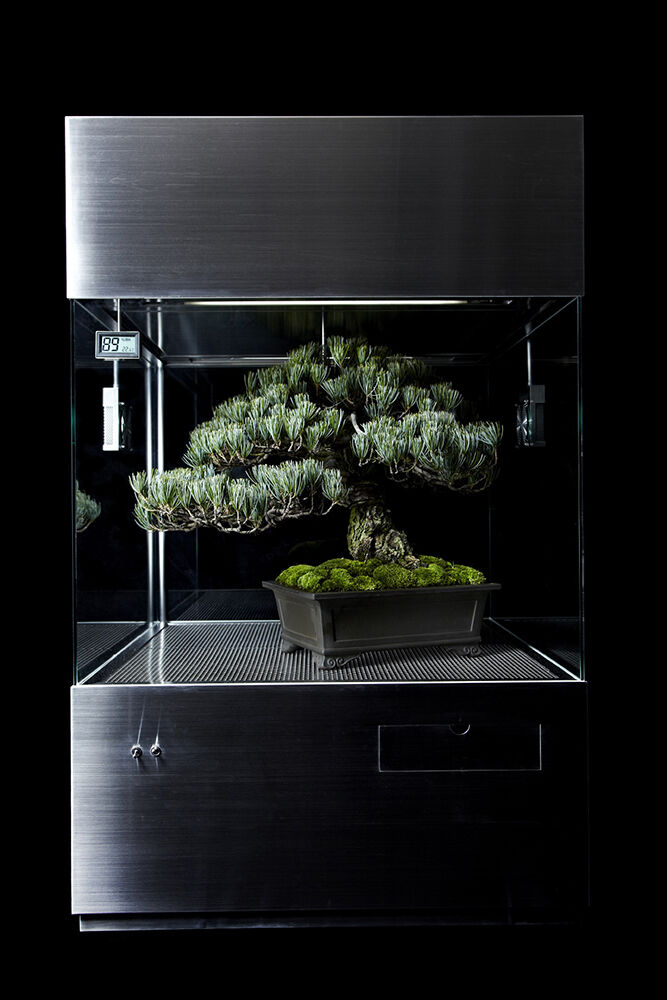 Azuma Makoto
Palludarium Shigelu, 2013
Broached Commissions
The full life cycle of the plants is a key component to Azuma’s work, whether that means their decomposition, burning them, or sharing the flowers with a wider community.
In the dual project Other Ideas, from 2017, Azuma’s team installed flowers in a nearly 10-foot-tall glass box in Rio de Janeiro’s Oi Futuro center, along with 100,000 flowers and a nearby coastal location. On the box, the decreasing height of the sinking mass was marked on the glass with timestamps—like the marking of a child’s height on a doorway, but in reverse. Outside, the flowers changed each day over a period of three months until they became nutrients for the land on which they resided.
“Sometimes people say my work shows a darker side of what flower art pieces can be. I think that it is because I am always conscious of concepts of ‘life’ and ‘death,’” Azuma said. “Every flower and plant has its own cycle: It blooms, withers, and [fertilizes the] next lives. Whichever moment you take from the process from birth to death, its expression is rich and beautiful, and I believe that it attracts people’s minds without fail.” 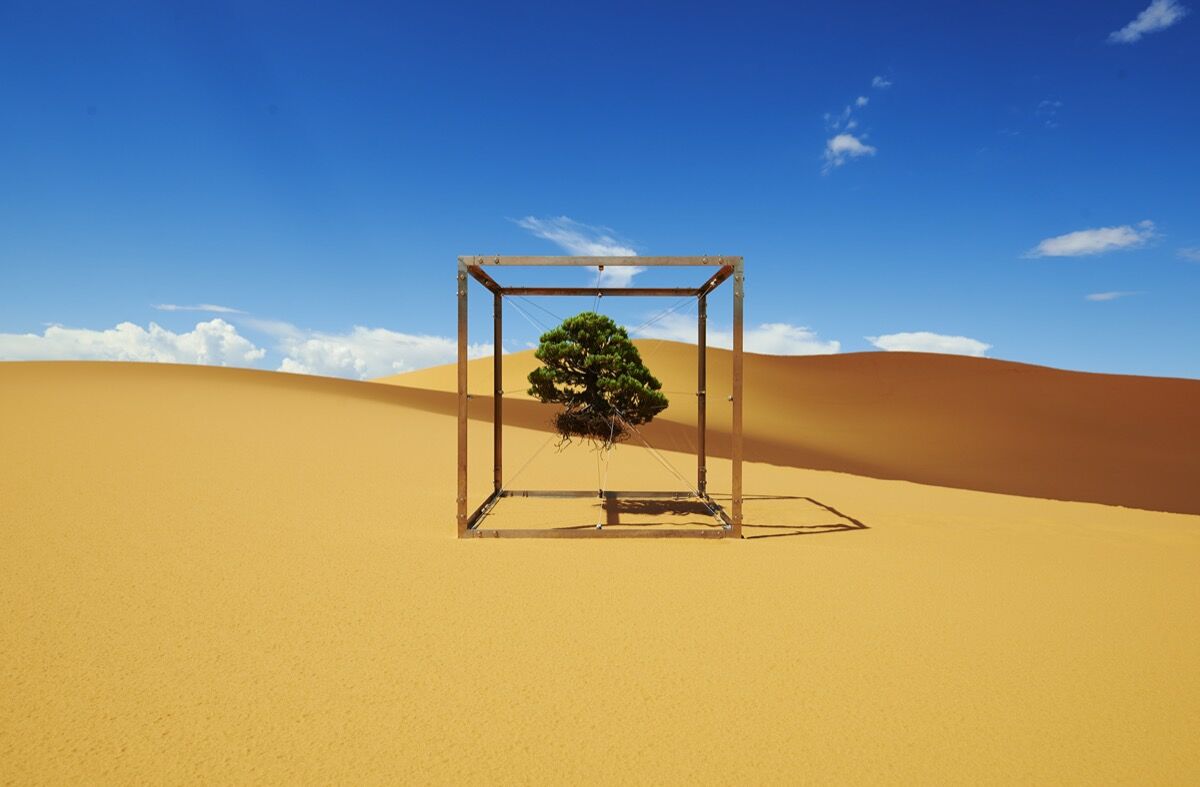 Flowers have long symbolized the passage of time and mortality in art, as Dutch vanitas painters were keenly aware, but they can also be a force for community and generosity. Inspired by Japanese flower sellers, Azuma has sowed his work across entire cities by enlisting cyclists or basket carriers to distribute flowers in cities like São Paulo and London.
Azuma’s installations, though they deal with temporality, are rooted in a sense of discovery rather than morbidity—a sense of wonder for the time we do have. “Azuma’s philosophy continues to evolve daily, yet remains rooted in his practice as a florist. At its core is his insatiable search for answers, based on an awareness that he ‘still has so much to learn about flowers,’” Koganezawa writes. “In a sense, [his works] are simply exclamations of joy whenever he looks at the world of flowers and plants and discovers something new.”
Jacqui Palumbo is a contributing writer for Artsy Editorial.
Related Stories