The Japanese “Demon of Painting” Who Invented Manga in 1874 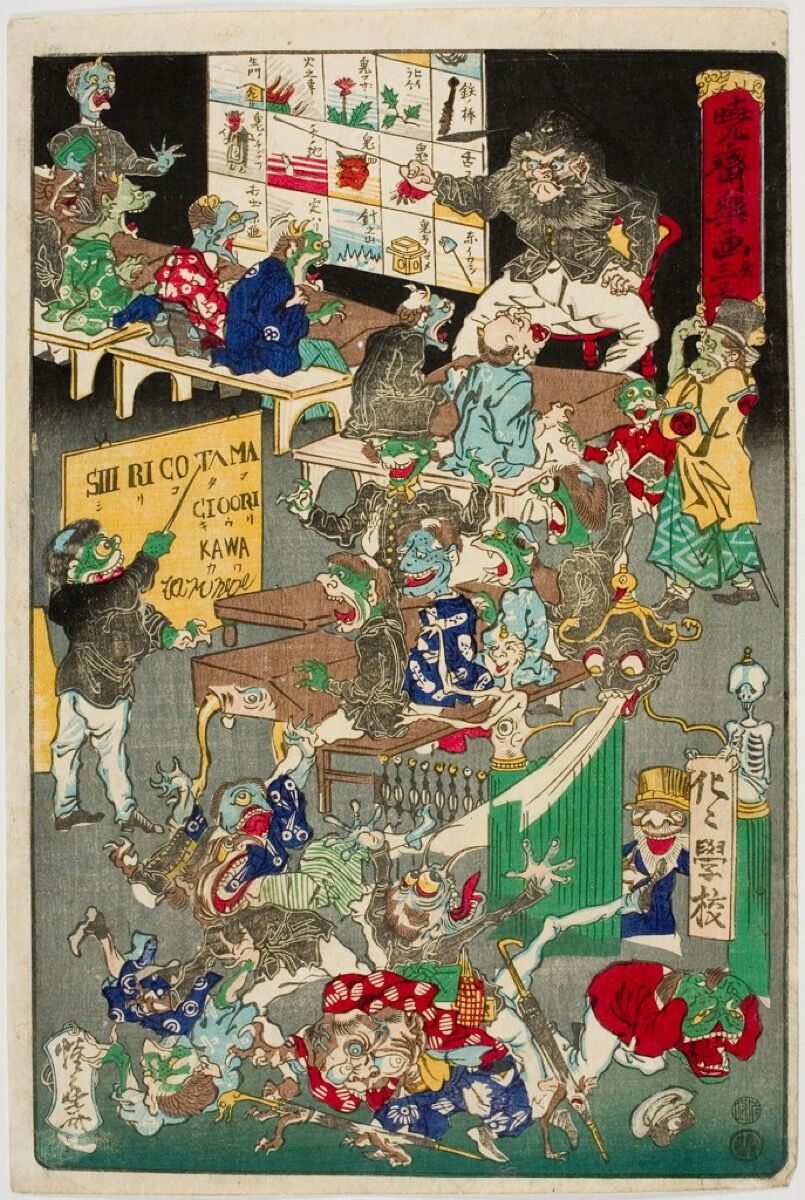 For years, all of
Kawanabe Kyōsai
’s prints and paintings bore the same inscription: Shōjō Kyōsai. The second word, which roughly translates to “crazy studio,” is the name he chose for himself right around the time he was becoming famous throughout Japan. The first, meaning “drunk,” is a little harder to explain. In part, the word was a cheeky way of disavowing artworks that might anger too many powerful people, which they quite often did. His 1874 woodblock print School for Spooks, No.3, from the series “Drawings for Pleasure,” shows a swarm of slimy, green demons squeezed into tiny desks and awkward-fitting Western clothes, a clear knock at the compulsory education system the Meiji government had mandated two years prior. Images like this one earned the artist a prison sentence, plus 50 lashes.
“Shōjō” also implied that Kyōsai,19th-century Japan’s most notorious artist, only came alive when he was smashed. Rumored to drink three bottles of sake every day by noon, he specialized in dense, eye-poppingly colorful scenes of demons and beasts that most of us wouldn’t dare imagine while sober. Counterintuitively, he was also a clean, precise draftsman, a workaholic who left behind hundreds of prints, paintings, and sketches. Many scholars of manga, the most popular form of Japanese comics, have credited Kyōsai with inventing the genre in 1874. On the strength of this oeuvre—fantastical, yet rooted in real-life political and cultural happenings—he is remembered as a master caricaturist, the great insult comic of Japan during some of the bumpiest decades in the country’s history. 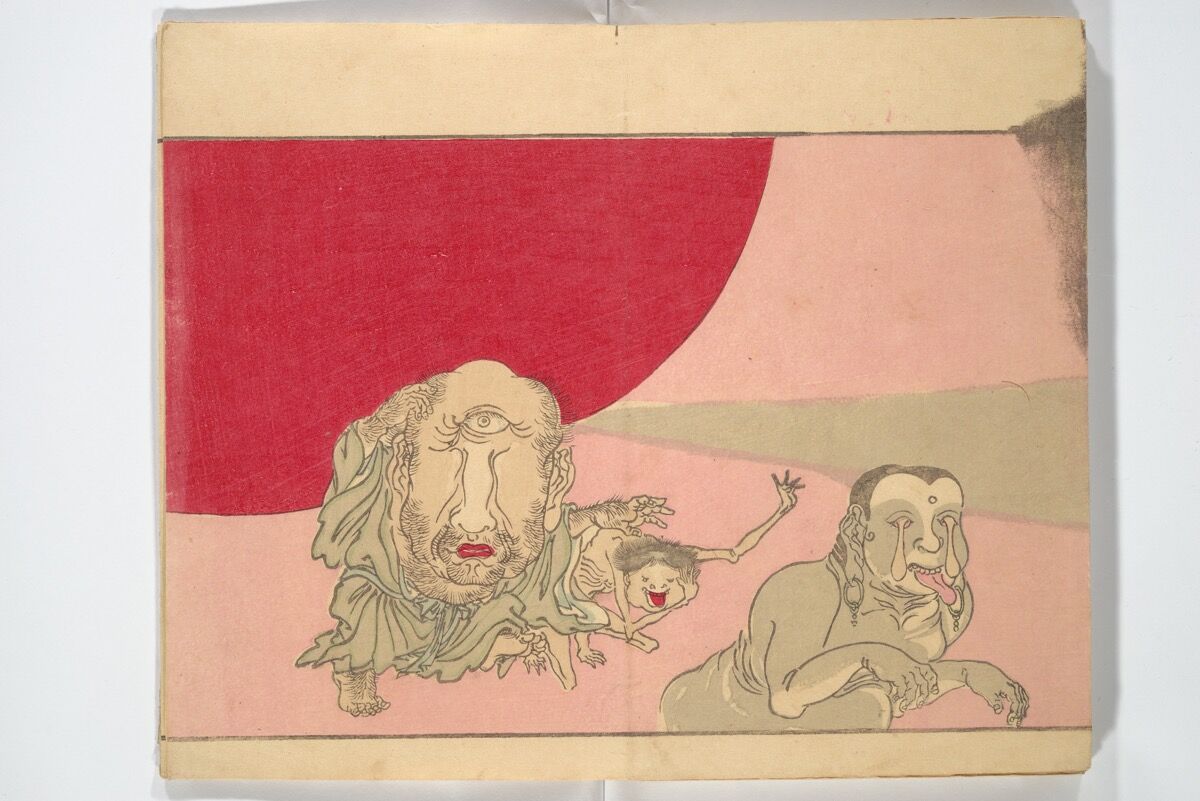 Legends cling to Kyōsai’s life like beads of moisture to the bottles of booze he hoarded. According to one story, at the age of nine, he found a severed head floating in a river, fished it out, and drew it over and over again until his horrified parents took it away from him. Fact or fiction, this story conveys an important truth about Kyōsai, or, rather, Shūzaburō, as he was known until adulthood. His precocity pulled him down paths few people would be willing to follow. While studying with the painter Maemura Tōwa in the early 1840s, he earned the nickname shuchu gaki, or “demon of painting,” an epithet he’d wear with pride for years to come.
All demons need something to work their mischief on, and for much of Kyōsai’s career, modern—or, more to the point, modernizing—Japan was his favorite target. In 1854, the year Kyōsai turned 23, the Tokugawa shogunate signed an economic treaty with the United States, opening up Japan to a flood of Western culture, cash, and technology. When reformist leaders dissolved the shogunate 14 years later, the processes of industrialization sped up: Factories and European fashions buried the feudal system, a development the Japanese people viewed with a mixture of pride and wistfulness.
In depicting the changing times, Kyōsai applied his distinctive humor to many traditional themes and genres. The results were—at least judging by the subject matter—similar to works by any number of other artists, but original and utterly modern in execution. Hyakki yagyõ, the ancient Japanese legend of the “night parade of 100 demons,” has probably inspired thousands of paintings and prints over the centuries, but few of these can rival Kyōsai’s for sheer inventiveness. In one 1889 illustration, a horde of skeleton soldiers rushes onward, one skeleton leading the charge on a horse with the head of a man. As with much of Kyōsai’s very best work, the luridness doesn’t come from any single source so much as the accumulation of fine, sickly details—like the pink, almost pornographic tongue dangling from the horse-man’s mouth. First these details creep up on you, then they overpower you. 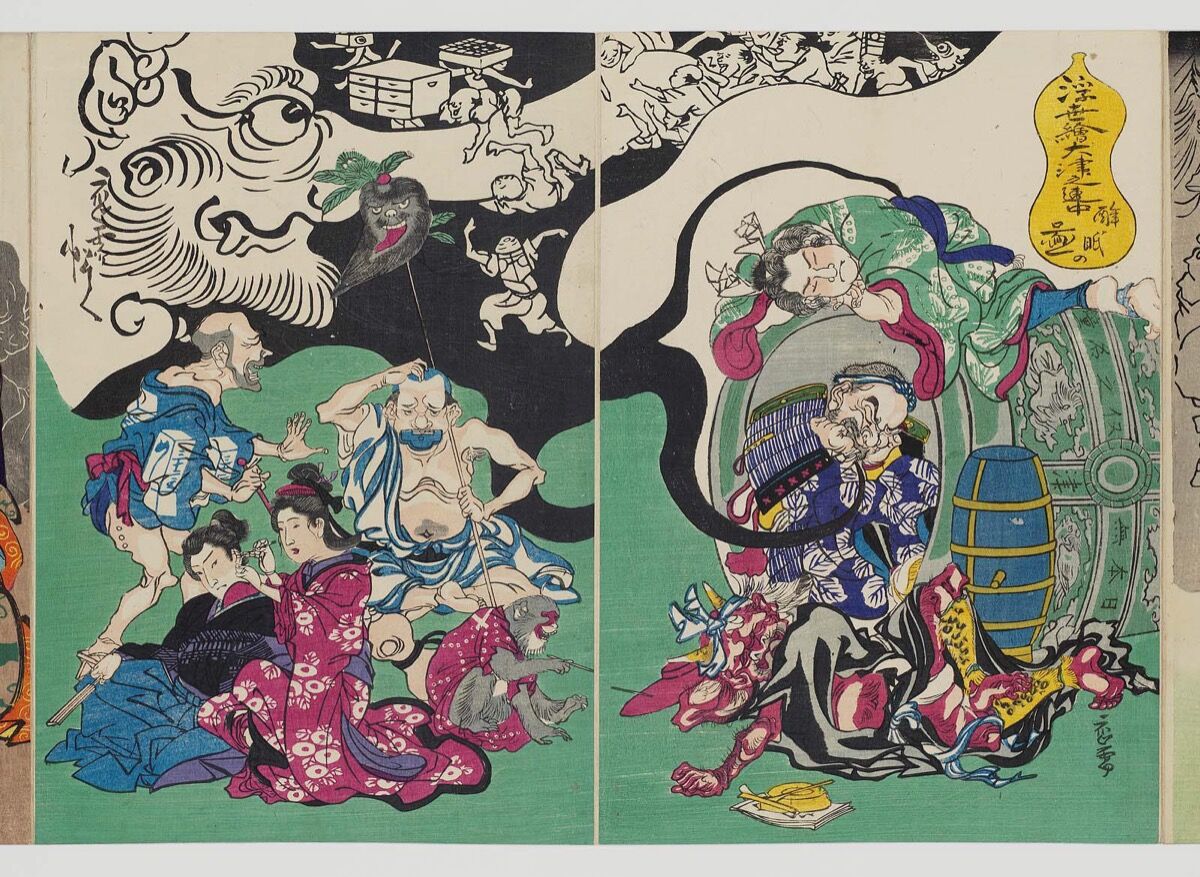 Kawanabe Kyōsai, Figures from Ôtsu-e Paintings of the Floating World in a Drunken Stupor (Ukiyo-e Ôtsu no renchû suimin no zu), ca. 1868. Courtesy of the Museum of Fine Arts Boston.

Advertisement
In his prints and paintings, Kyōsai was especially adept at crowd scenes. He delighted in packing herds of animals, monsters, and people tight into the frame. These scenes epitomize his attack on post-1854 Japanese society: In the era of rapid change, chaos was king, few seemed to know what was going on, and Western culture spread like a virus.
There’s probably no better example of Kyōsai’s brand of social satire than the enormous He-gassen—literally, “fart competition” or “fart battle”—scroll he completed in 1868. The history of He-gassen—a weird and distinctly Japanese genre founded on a timeless kind of raunchy humor—deserves its own article. But what’s most fascinating about Kyōsai’s contribution to this hallowed genre, completed in the year the Meiji Restoration began, is the way he pairs the usual bathroom gags with subtle political commentary. On close inspection, the real targets of his satire are Japanese people straining to become Westerners—adopting Western clothes and affecting a dignified, pseudo-Victorian demeanor. In response to all this pompous wind, Kyōsai offers some wind of his own.
Kyōsai’s impatience with Japanese society got him in serious trouble more than once. In 1870, he was whipped and briefly imprisoned for allegedly drawing acts of sodomy between Westerners and Japanese (a none-too-subtle metaphor, we can surmise, for what Kyōsai thought the West was doing to his country). But he remained popular and prolific. If anything, his work after 1870 became more incisive, though he continued to couch his satire in fantasy and folklore. 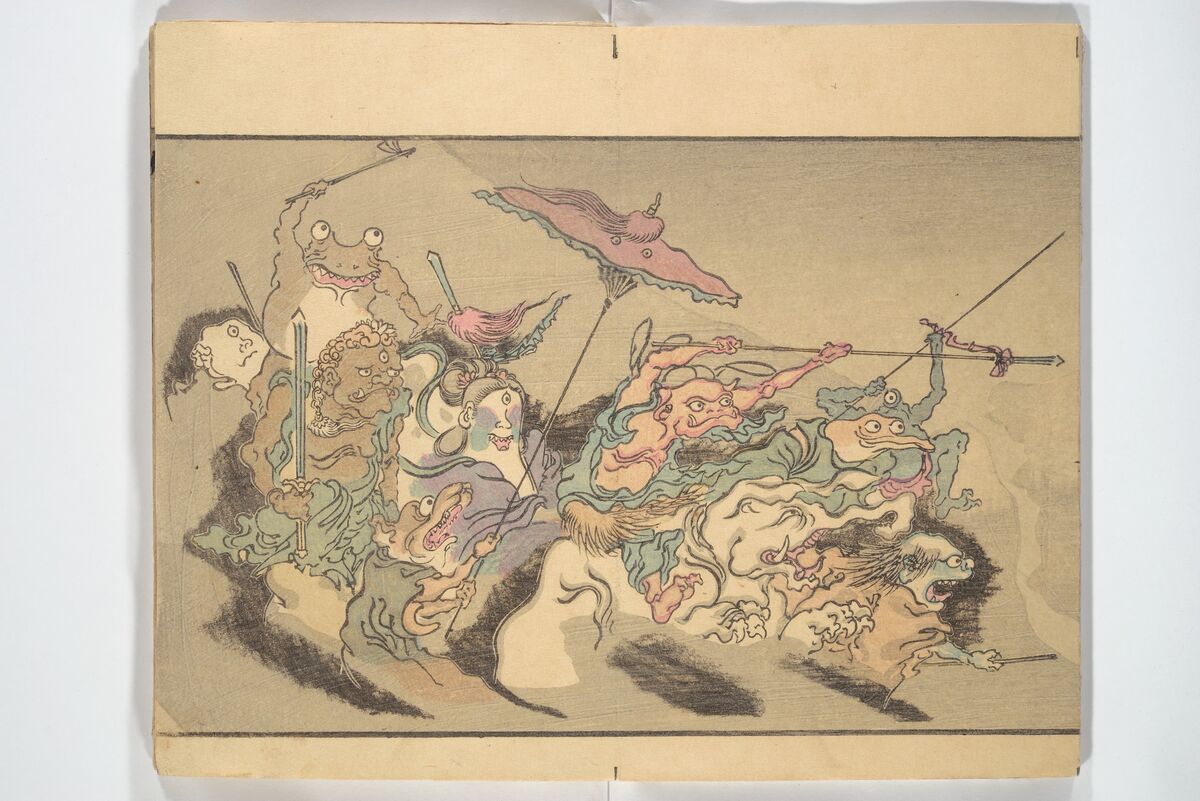 In 1874, Kyōsai, along with his close friend Kanagaki Robun, founded E-shinbun Nipponchi, considered by some to be the first manga magazine. The magazine—which combined the serial form of the He-gassen scroll with the cosmopolitanism of Punch, the leading English humor publication of the age—never really gained traction, and folded after only three issues. But its simple, whimsical style inspired dozens of imitators in late 19th century, and its present-day descendants are legion, as anybody who’s ever walked into a comic book store can attest. One recent study found that manga makes up almost a quarter of all books sales in Japan.
It’s odd that Kyōsai, one of the harshest satirists of Westernization, had no problem with taking artistic inspiration from an English magazine like Punch. But if he was critical of Europe’s economic presence in his country, he was by no means anti-Europe. Rather than dismiss the new medium of photography as a French trifle, as plenty of his contemporaries did, he incorporated it into the art classes he taught in the last decade of his life, even encouraging his students to paint from photographic images. One of these students, a British architect named Josiah Conder, eventually became one of his closest friends.
It was Conder who penned Kyōsai’s obituary when he died in 1889. “To him,” Conder wrote of his friend and idol, “there always existed a great El Dorado of art beyond the limit of the lights into which he was born and within the radius of which his own opportunities compelled him to work.” (Did he know about the fart battles?) The obituary gets less lofty, and considerably more poignant, when Conder describes Kyōsai’s final painting, a self-portrait he completed just a few days before his death: “A weird outline of his own emaciated form, bent and tottering as he stood to paint, and suffering from the symptoms of his fatal disease.” It’s tragic, but somehow fitting, that after a lifetime spent lampooning modern Japan, Kyōsai finally turned his pitiless gaze back upon himself.
Jackson Arn
Related Stories

7 Things You Didn’t Know about Hokusai, Creator of The Great Wave

How Japan Has Inspired Western Artists, from the Impressionists to Today
Advertisement
Further reading in Art 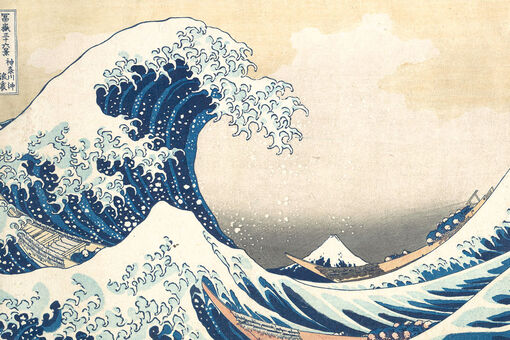 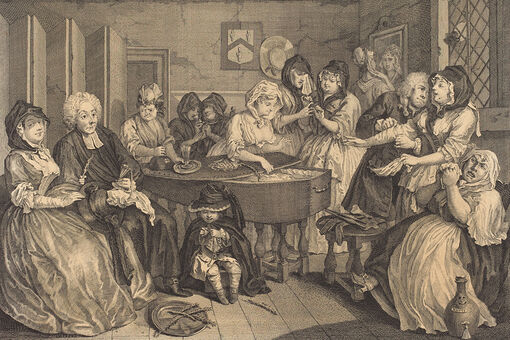 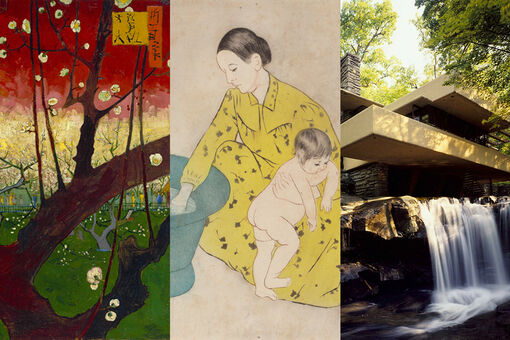 How Japan Has Inspired Western Artists, from the Impressionists to Today
Katherine Whatley
Aug 10, 2018