From Mick Jagger to Elle Macpherson, Jean Pigozzi’s Photographs Captured the Celebrity Glamour of the ’80s and ’90s 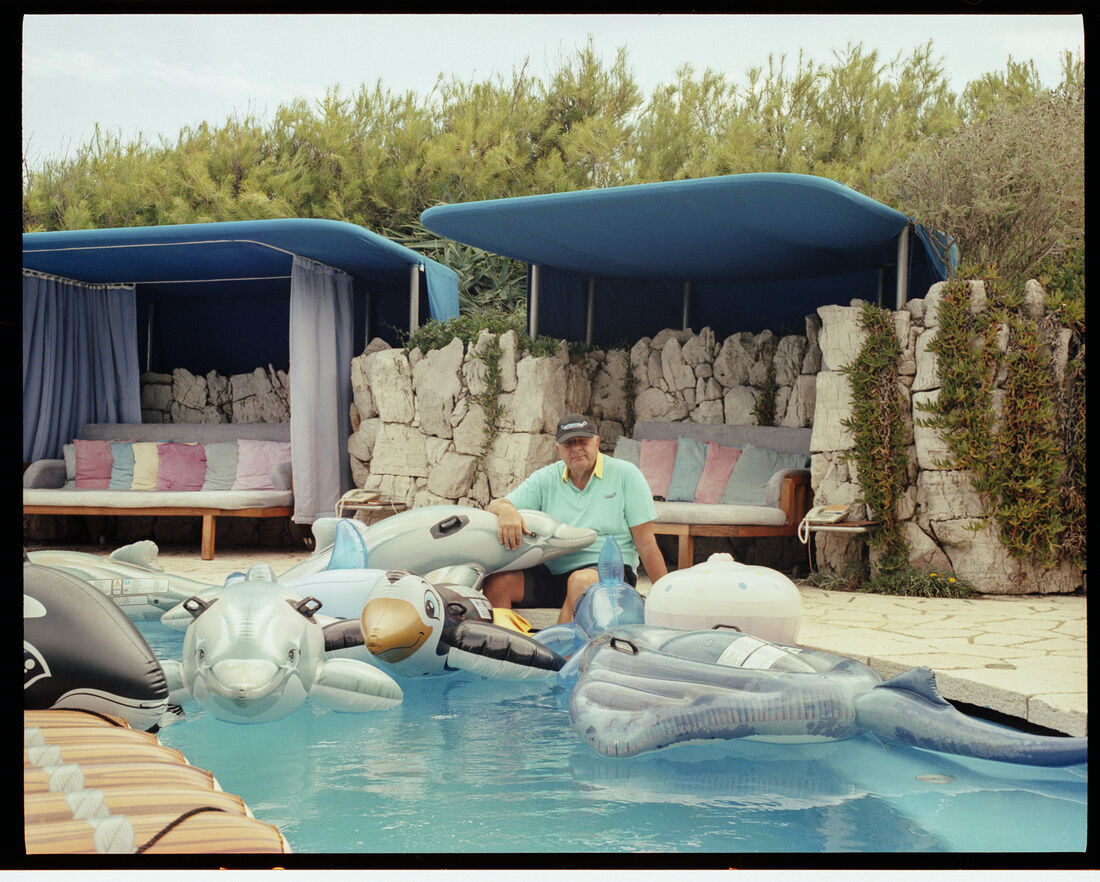 Photo of Jean Pigozzi at his home in Cap d’Antibes by Victor Picon for Artsy.

These days, if you want to see into the private lives of the world’s rich and famous, look no further than Instagram. You’ll find Rihanna vacationing on a yacht in St. Barts, Kim Kardashian shooting a nude selfie in a bathroom mirror, or Beyoncé boarding a private jet. But in the 1980s and ’90s, these scenes were restricted to an inner, iPhone-free circle. Within that circle was
Jean Pigozzi
, the globe-trotting entrepreneur, art collector, and photographer who, wielding his trusty Leica, captured this world from within.
Pigozzi, the heir to France’s Simca automaker fortune, picked up his first camera around age nine and arguably never stopped shooting. “The reason why I took pictures is I like to document my life,” he tells me over FaceTime from his estate on a private island in Panama (one of several homes he keeps around the world). “But I’m quite dyslexic and my handwriting is horrible, so if I write notes I can’t read them.” 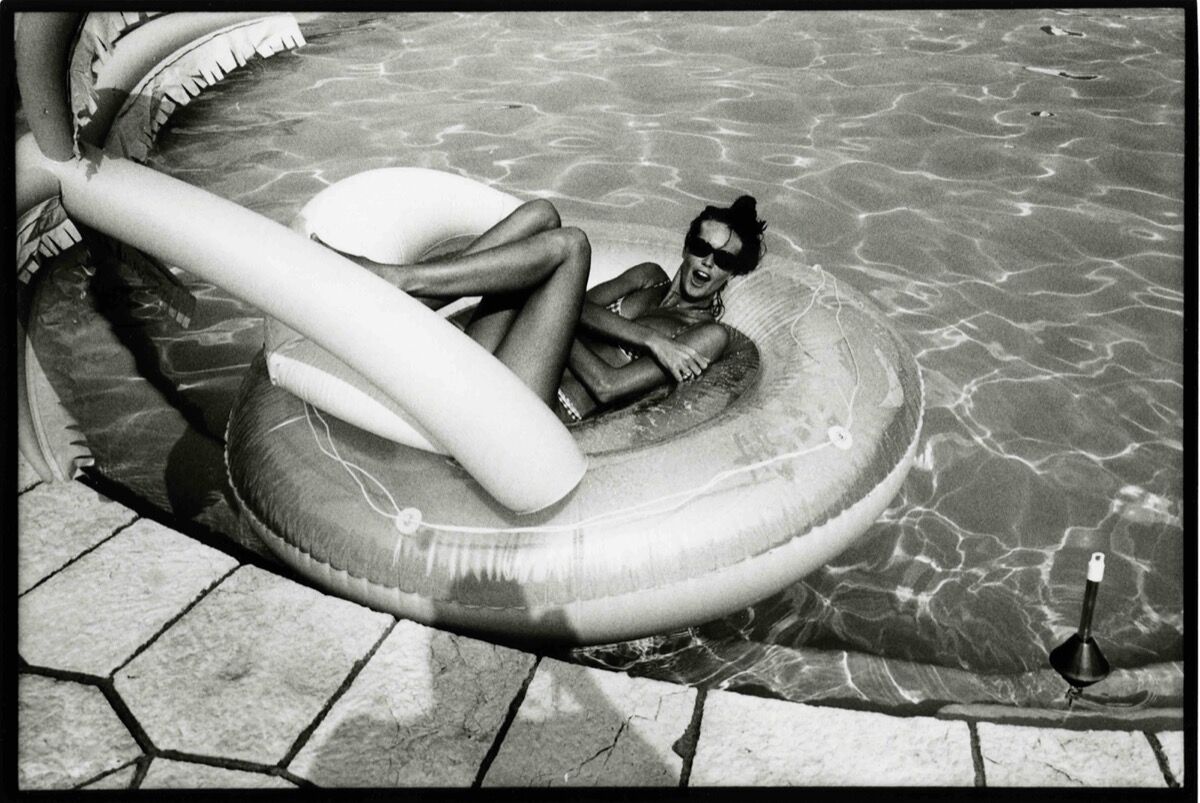 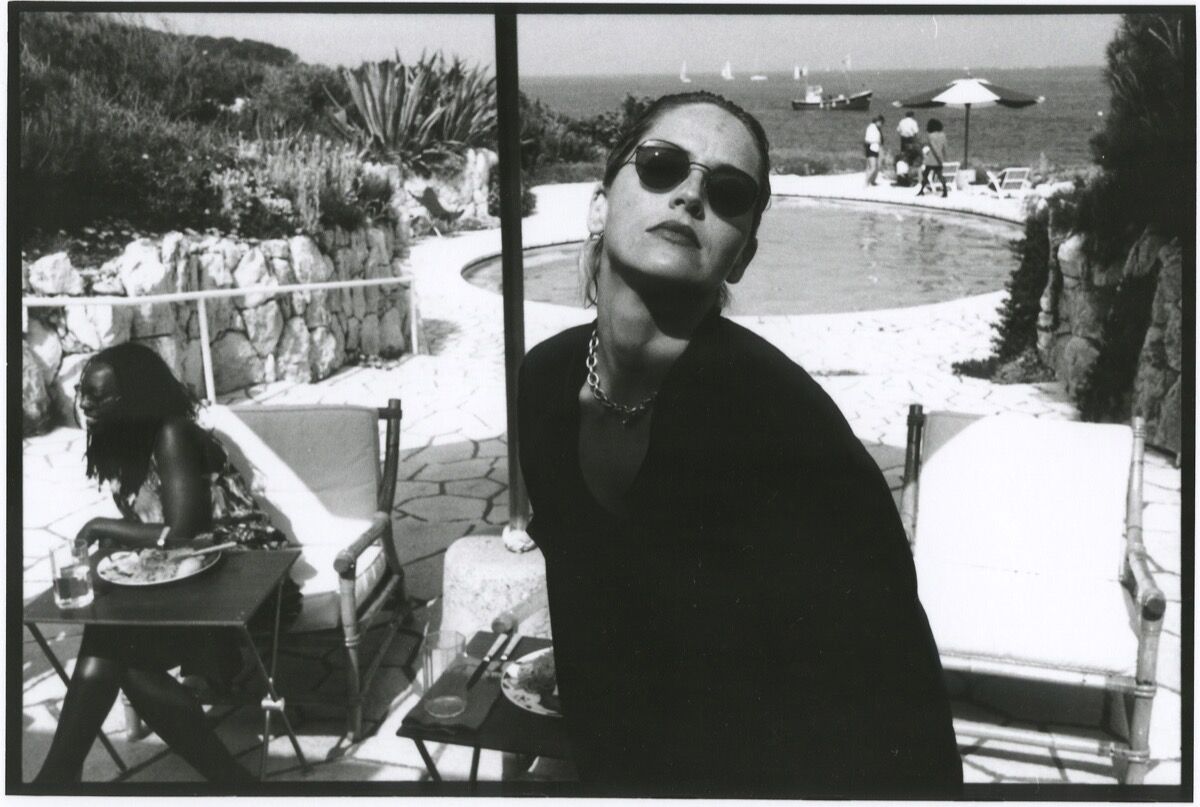 Among his most iconic shots are a collection that sees stars like Elizabeth Taylor, Sharon Stone, and Calvin Klein gather around a swimming pool at his
Ettore Sottsass
-designed villa in Cap d’Antibes. Over 30 of those photographs go on view at Galerie Gmurzynska on February 19th. Long before he coolly caught these legendary celebrities and creatives, a twentysomething Pigozzi learned his craft from one of history’s most avid chroniclers of high society—
Andy Warhol
himself.
While attending Harvard in the ’70s, Pigozzi made frequent trips to New York City, where he quickly befriended Warhol. “Andy was always taking photographs and Polaroids, but what was very interesting, he was very free about how he took pictures,” Pigozzi recalls. Warhol snapped his shutter with uncurbed frequency, and many of his most illuminating society portraits—like Jerry Hall seated before Mick Jagger’s birthday cake—catch subjects at ease, purposefully unposed. “He knew all the people, and they were not nervous about him taking pictures,” Pigozzi says. “The paparazzi were trying to penetrate the life of the stars,” he adds. Much to the contrary, Warhol was a friend to the people he photographed. 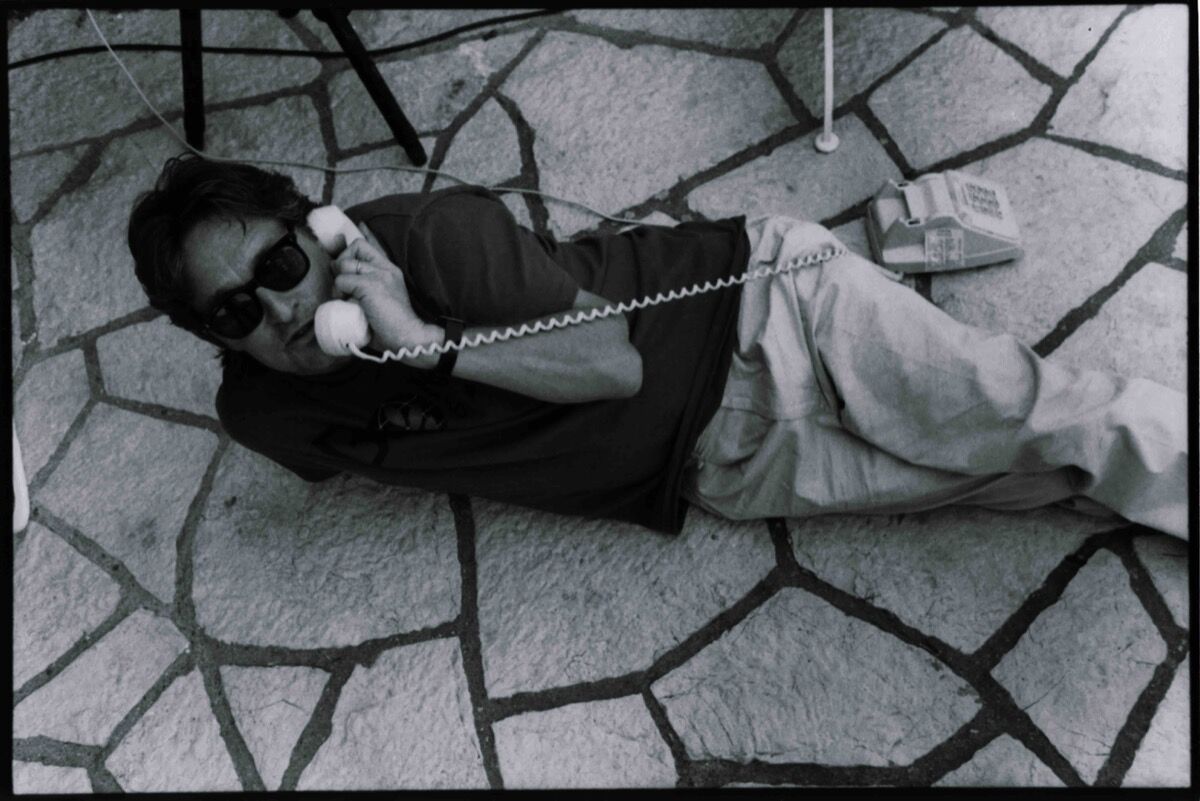 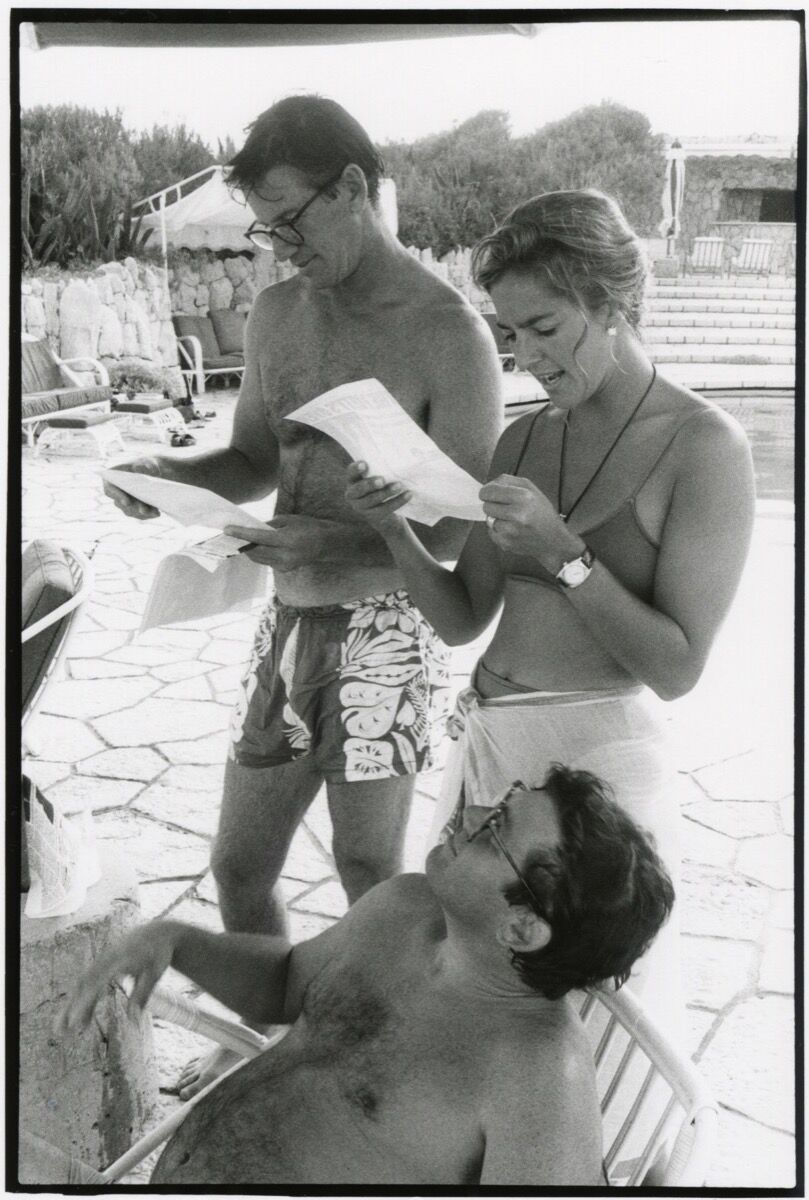 Advertisement
It’s with this ethos that Pigozzi has amassed an ever-growing archive of the actors, musicians, models, and entrepreneurs he calls friends. This includes photographs of the visitors to his poolside home in the South of France, many of them taken during the Cannes Film Festival each year. For Pigozzi, the location is significant: “The pictures were taken around this pool that my parents built in 1953,” he tells me. “I was born in ’52 so we are about the same age. I spent all of my summers around this pool; the first time I looked at a girl in a bathing suit; I learned how to swim there; there are always people visiting me around this pool.” These photographs, then, from a youthful Michael Douglas lounging on the patio to supermodel Elle Macpherson sunbathing on a pool float, have become a decades-long journal of Pigozzi’s fabulous life.
One photograph sees a playful Mick Jagger pushing
Helmut Newton
into the kidney-shaped pool—which the fashion photographer Newton borrowed for commercial shoots of his own on more than one occasion, including one with Naomi Campbell. Another of Pigozzi’s shots catches Jagger,
Julian Schnabel
, and
Dennis Hopper
in the same frame. “That’s the kind of group that I like to put together,” Pigozzi tells me, describing the three major talents. “I usually have intelligent creative people around the pool.” (The Cap d’Antibes residence is also home to much of Pigozzi’s African art collection, which will be featured in an exhibition at Fondation Louis Vuitton beginning April 25.) 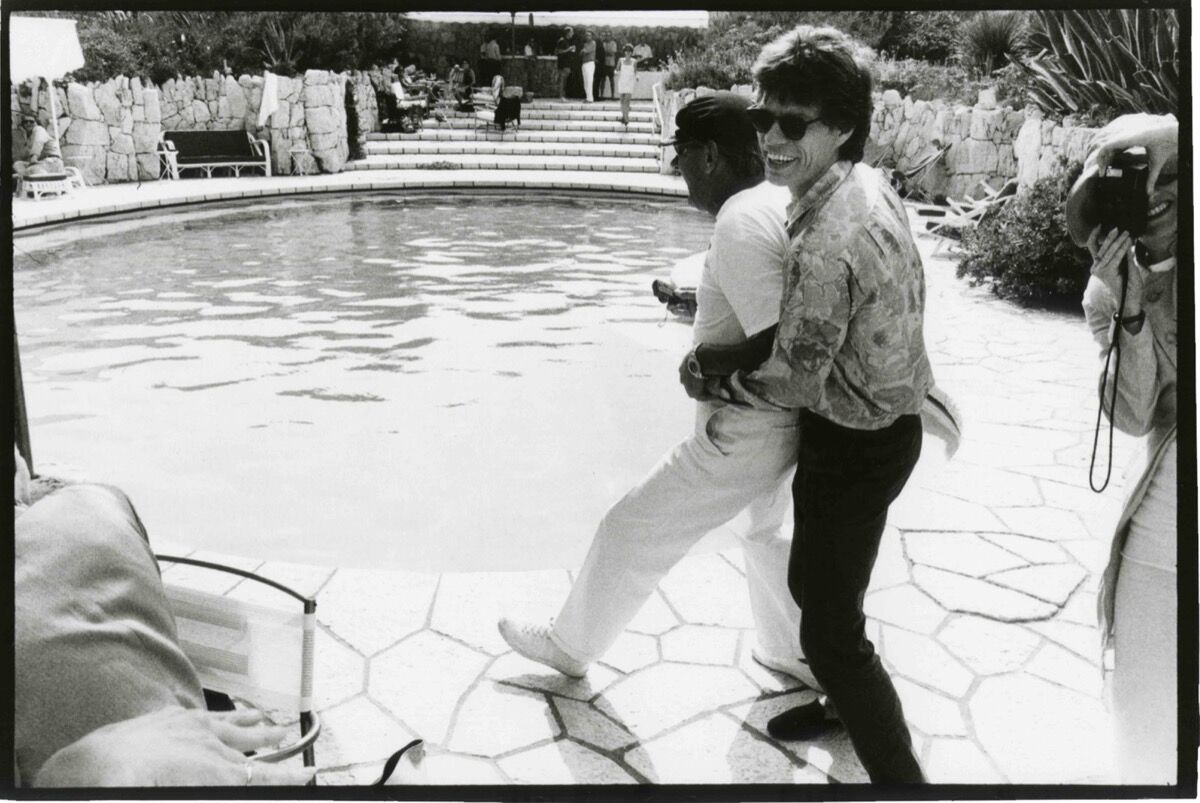 Pigozzi recalls a photograph of the infamously glamorous Elizabeth Taylor, who paid him a visit following an Amfar Charity Gala complete with her bodyguard, assistant, driver, and hairdresser. (After that, Pigozzi added a no-entourage clause to his pool-party invitations.) “She was very sweet and her little dog barked—my five big Weimaraners disappeared for a week.” Most memorably, she’d asked Pigozzi if he was going to give her a diamond. “I said what? And she said, ‘Well, I ask every man that I meet if he’s going to buy me a diamond, and sometimes it works,’” he says, and adds, “It didn’t work on me.”
While the pool parties—and the photos—continue to this day, Pigozzi is keenly aware of how times have changed. “It was a bit more glamorous then; people like the Kardashians did not exist at that time,” he explains. “When you were a movie star, there was a reason why you were a star. You were Brigitte Bardot, Sophia Loren, Jane Fonda; you were a star because you were a great actress and you also looked good.”
Pigozzi also recognizes the way in which technology has changed the game. “Now everybody takes pictures. In those days it was slightly more rare, so it was something a bit special,” he says. But in contrast to the volumes of pictures we see each day on social media, he tells me, “My pictures are taken with serious cameras and I rarely use an iPhone to take pictures. I think in 100 years time, my pictures will be kind of interesting because I have documented a certain kind of life.” 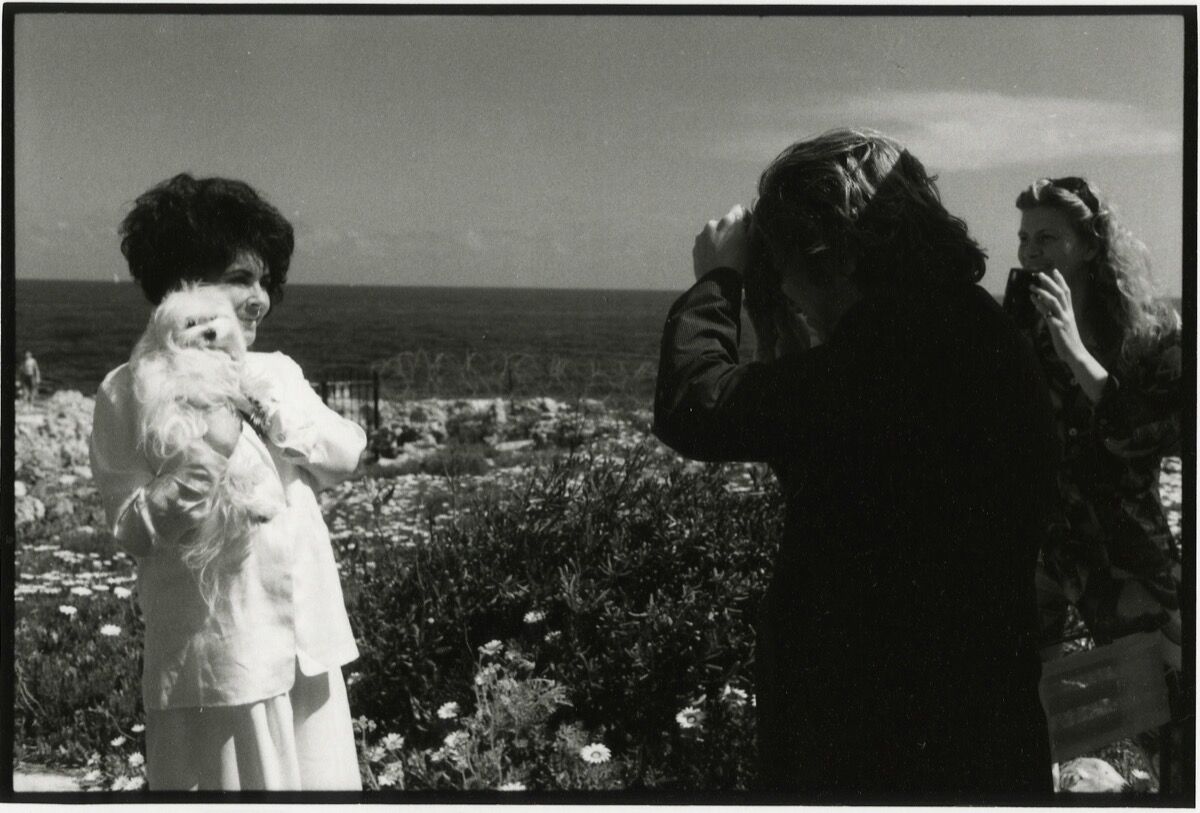 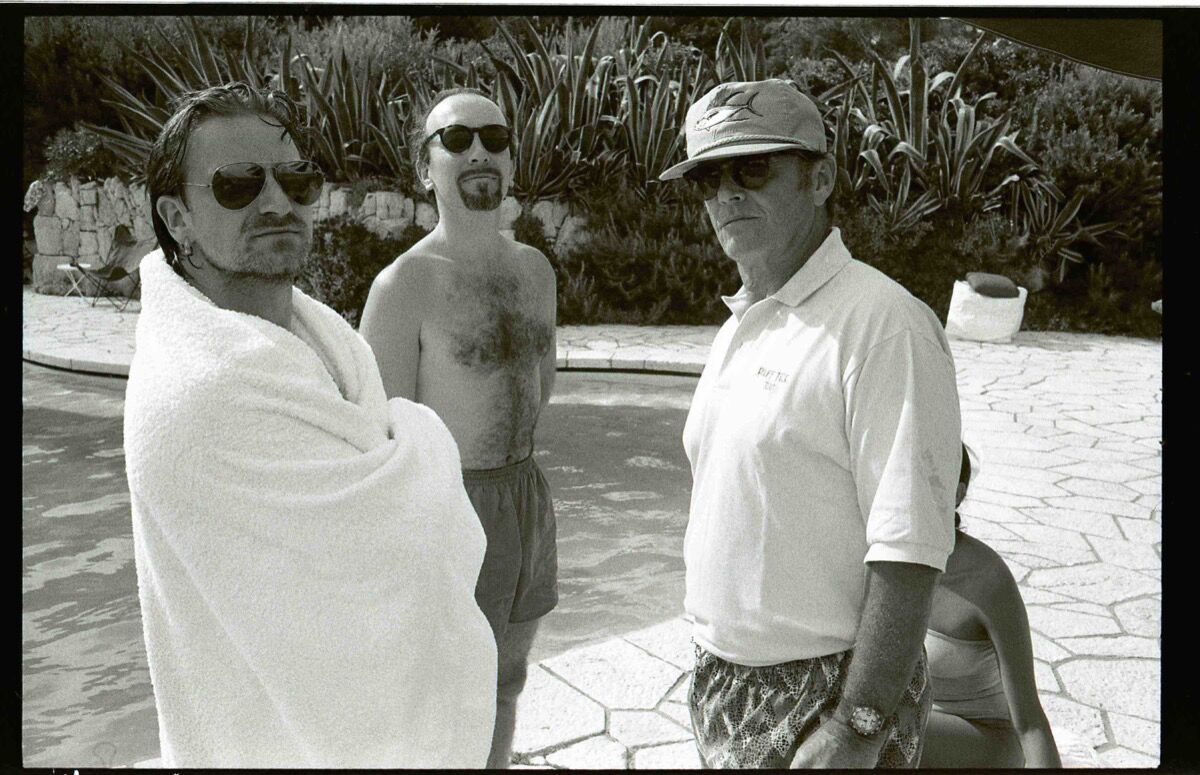 He recalls taking his first selfie with a big star with Faye Dunaway in the early ’70s at Harvard, well before the trend was amplified by iPhones. “Mick Jagger was telling me that now people come and do a selfie, and they don’t ask him to do it and they walk away, they don’t even thank him,” Pigozzi says. “He was kind of shocked by how fans now think it’s automatic they should get a selfie.”
But Pigozzi holds fast to his ethics, and is already looking ahead to the next iteration of his series at the pool. Until then, he’s voraciously snapping away at his home in Panama. “Every day,” he tells me. “Even now in the jungle, I take pictures of trees and monkeys and dolphins, my friends who come over. Every day is documented.”
—Molly Gottschalk
Related Stories