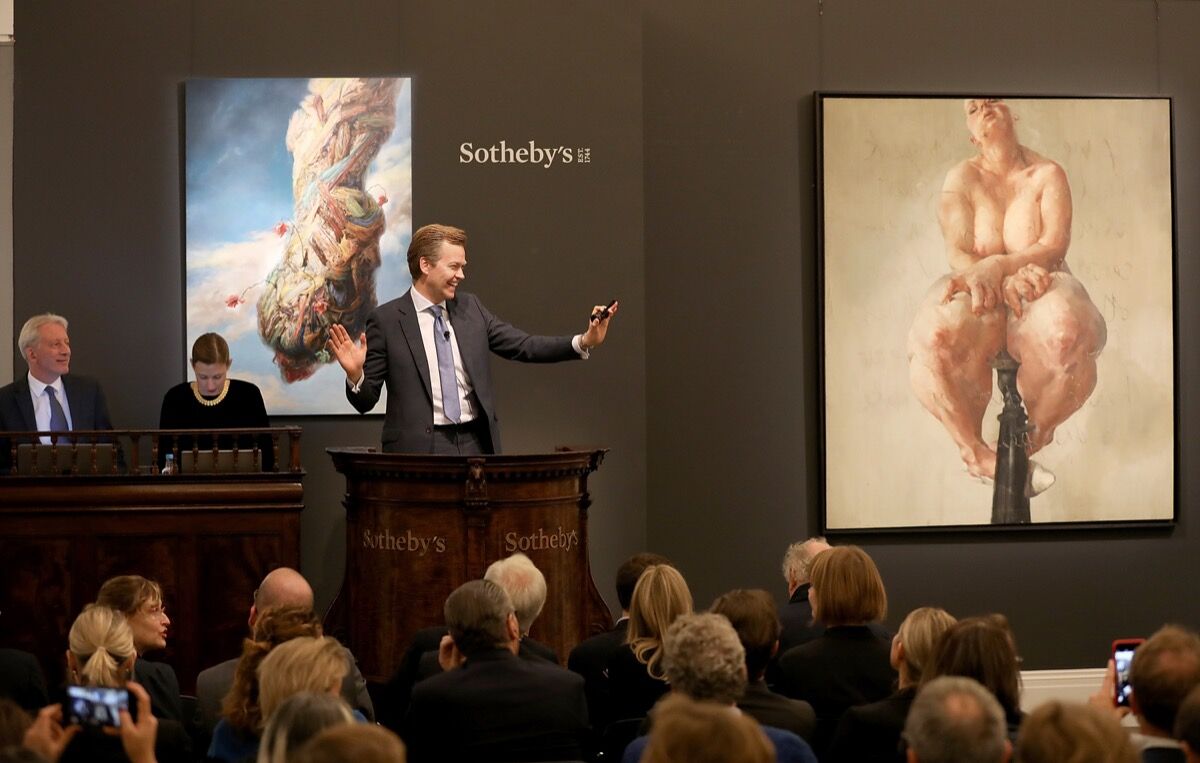 After an extended, five-person battle at Sotheby’s London Friday,
Jenny Saville
became the world’s most expensive living female artist when her painting Propped (1992) sold at the house’s New Bond Street salesroom for £9.5 million ($12.4 million). The work was from the portion of the sale dedicated to pieces from the management consultant and collector David Teiger that grossed a total of £35.9 million ($47 million). Combined with the contemporary sale that followed, Sotheby’s brought in a total of £67.3 million on the evening, ahead of the low estimate of £53.2 million ($69.3 million).
Coming just six lots into the evening, the vigorous brawl for Saville’s large painting set the tone for the rest of the night, when active bidding in the room contributed to a 100% sell-through rate for the Teiger collection and 81% sell-through rate by lot for the contemporary sale (Christie’s notched an 85% sell-through on Thursday night). 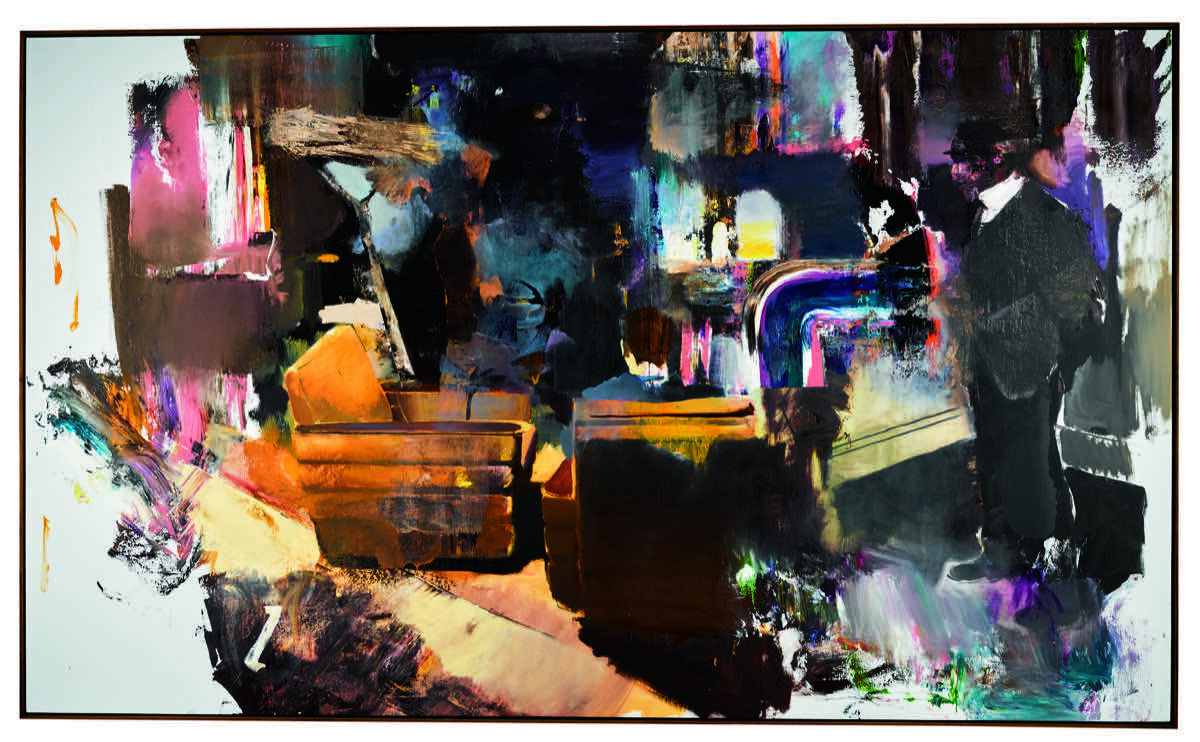 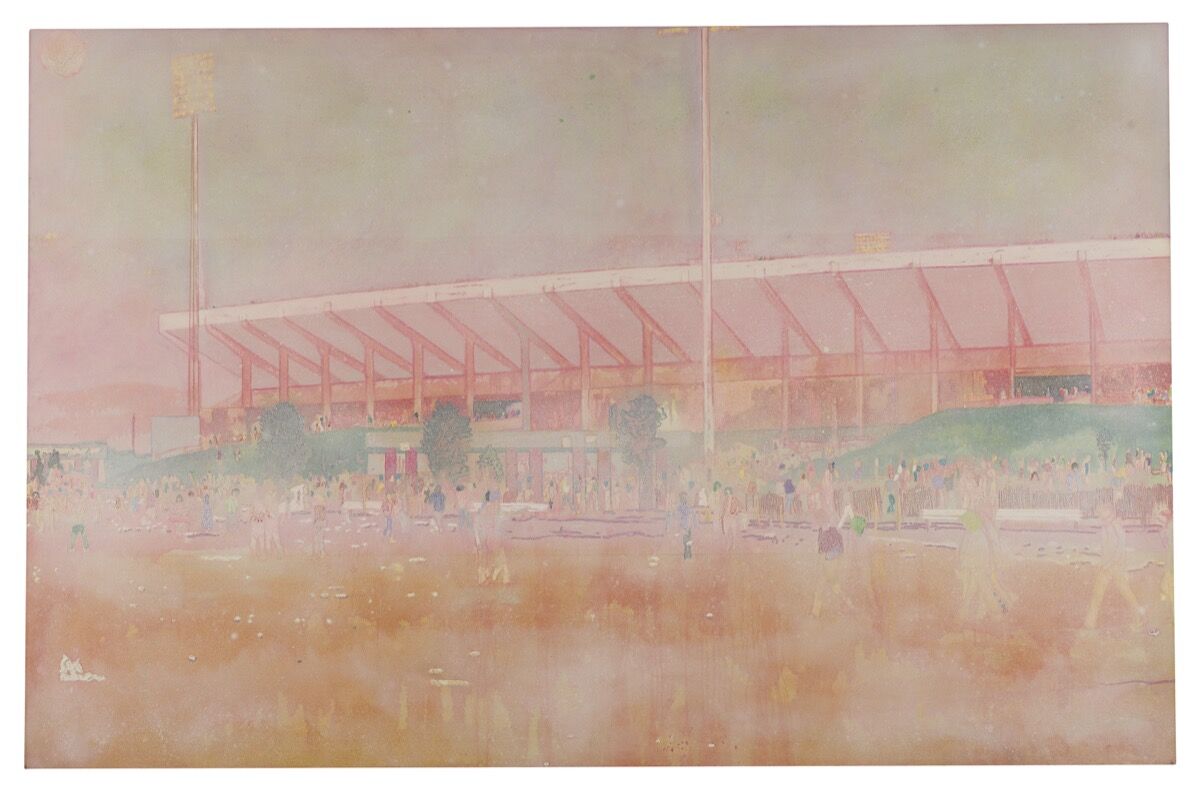 Advertisement
The evening’s total was enough to beat out Sotheby’s equivalent sale last year, when the contemporary sale and the Italian sale totaled £68.7 million (just under $91 million). This year, works that would have made up a standalone Italian sale were woven into the contemporary sale, and the results were mixed: would-be pricey works by
Lucio Fontana
and
Erico Castellani
could not find bidders and were bought in. Other works by artists with usually-deep demand like
Christopher Wool
and
Neo Rauch
, were captured with a single bid on the phone, presumably by the guarantor.
But, for the most part, auctioneer Oliver Barker was able to conjure healthy bidding on a fair amount of lots, setting a record not only for Saville but also for
Kai Althoff
, when a work from the Teiger collection sold to a phone bidder for a £460,000 hammer, or £574,000 ($753,427) with fees. And the salesroom maintained an active feel until the auction’s end.
Thaddaeus Ropac, the Austrian dealer who has galleries in London, Paris, and Salzburg, attributed the buoyant mood to the momentum generated by the works once owned by Teiger, who died in 2014 and spent many years as a trustee of the Museum of Modern Art in New York. 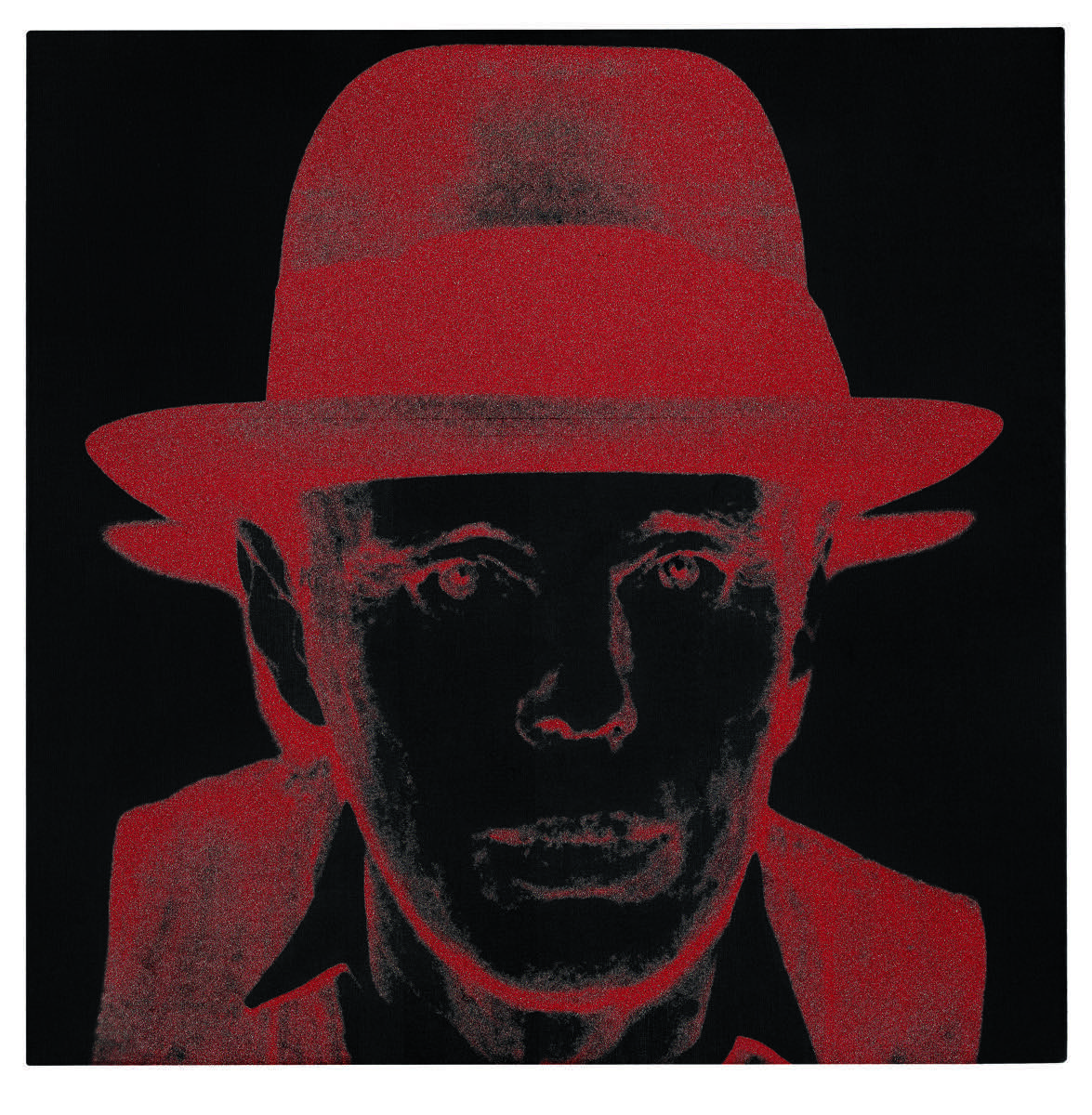 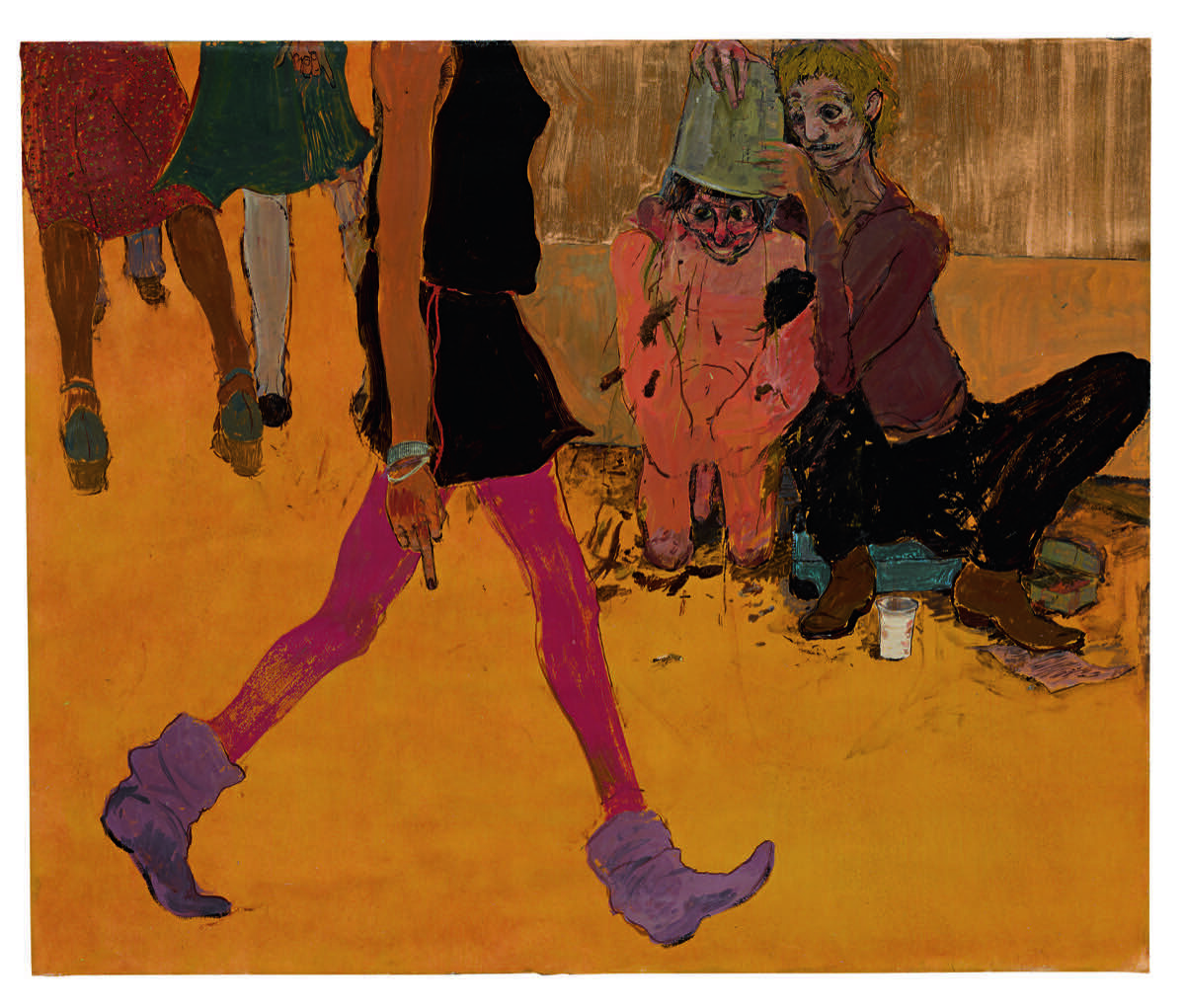 “This was great material, and there was very quick, active bidding,” said Ropac, who personally put up his paddle during a number of lots, successfully winning an
Andy Warhol
portrait of
Joseph Beuys
for a £660,000 hammer, or £802,000 ($1,000,000) with fees. (Ropac began representing Beuys’s estate in April of this year.) The dealer praised Teiger for his ability to get works from sought-after artists in their prime.
“He was able to get first choice from dealers because he gave so often to MoMA—I sold to him all the time,” Ropac said. “And that’s what made the sale.”The sale at Sotheby’s came just after the 20th Century and Contemporary Art Evening Sale at Phillips, which achieved £20.2 million ($26.4 million). 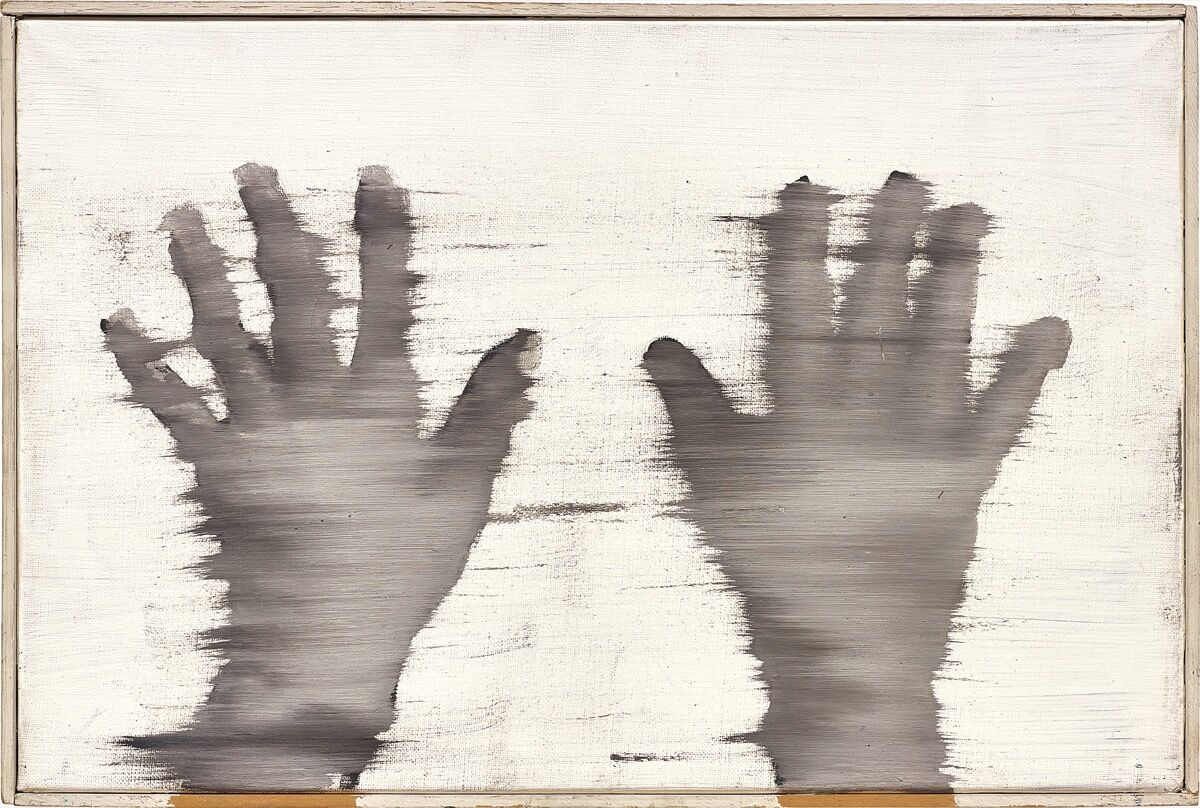 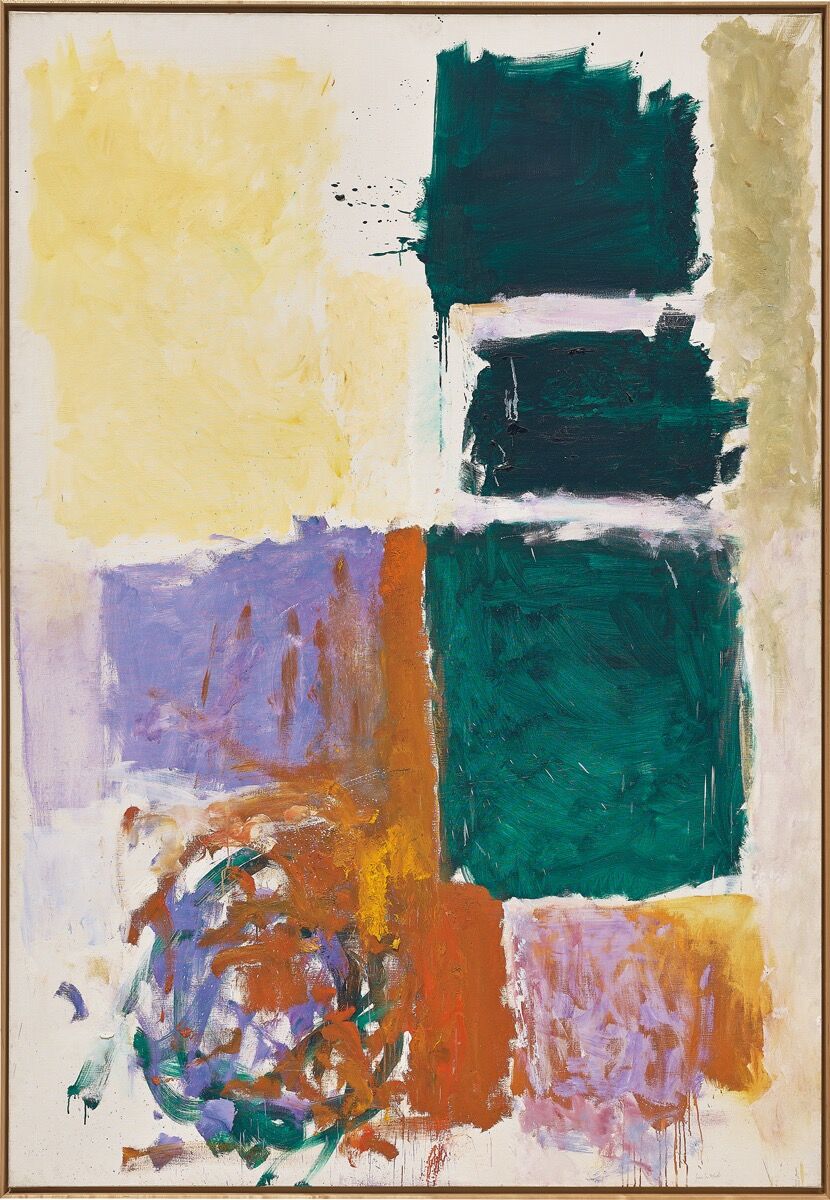 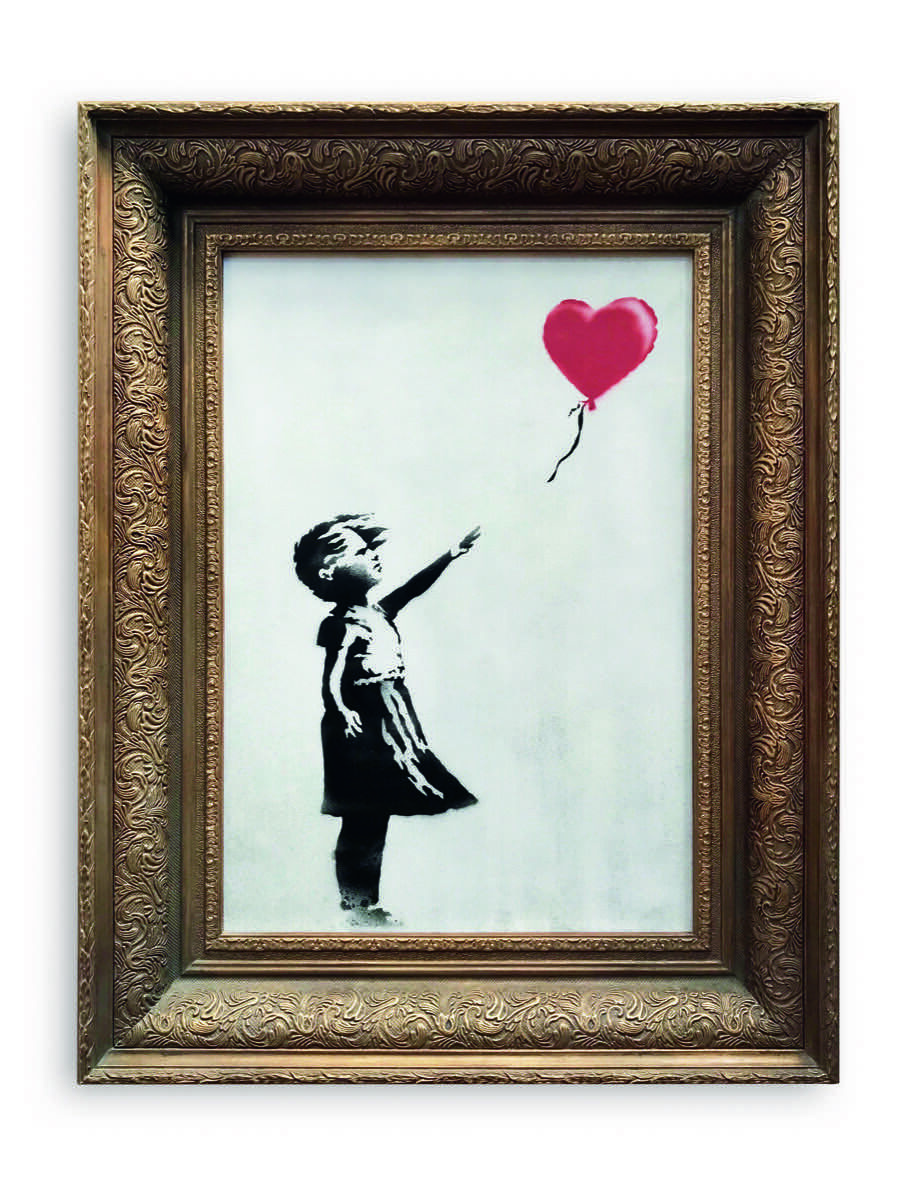 But the evening’s true fireworks didn’t come until the very end of both sales, at Sotheby’s, when
Banksy
’s iconic Girl With Balloon (2006), which was installed beside the back rostrum, came up for sale. The work attracted feverish bidding in the room and on the phones, racing past its high estimate of £300,000 to hammer at £860,000, or just over £1 million ($1.3 million with fees). As the gavel slammed, a siren rang out through the salesroom and everyone stood stunned as the Banksy canvas slid through the frame that it was contained in and emerged underneath—but shredded.
Confusion erupted throughout the salesroom, but it seems that the art world’s biggest prankster concocted a scheme in which his work would get destroyed as soon as it was sold. The spray painted work of the girl with a red balloon, acquired directly from the artist, came in what the catalogue called “the artist’s frame”—a frame that was oddly thick for such a small work of
street art
. A source at Sotheby’s, who spoke on the condition of anonymity, said that the Banksy camp had insisted on securing an unusually high number of seats for the sale. Some onlookers reported seeing one of these people with a device in his hand after the shredding happened, and that he was detained by security as he tried to leave.
“We have not experienced a work spontaneously shredding after it sells for a million pounds,” Branczik said at the press conference.
He absolutely denied any knowledge that such an act was coming.
“We got Banksy’d,” he said.
The salesroom calmed down for long enough that a
John Currin
from the Teiger collection that went unsold earlier in the evening could get brought back out for another go. Branczik jousted with senior specialist Martin Klosterfelde and the work eventually sold for £370,000 ($485,018) with fees, well below the original £800,000 low estimate.

Despite the record-breaking Saville, Sotheby’s wasn’t able to match the £84.6 million ($109.4 million) haul brought in by Christie’s the night before—even though the rival house had a number of high-profile passes. Securing the Teiger collection was a coup, but Sotheby’s has still struggled to secure the big-fish consignments, like the
Francis Bacon
that sold for £19.9 million ($26 million) on Thursday, that continue to put Christie’s Post-war and Contemporary Art department on top.
Oh, and one more: the Banksy stunt was an inside job.
Nate Freeman
Cover image: Jenny Saville, Propped, 1992. Courtesy of Sotheby’s.
Related Stories