What Does It Mean to Be Jewish? New York’s Jewish Museum Offers Almost 600 Answers 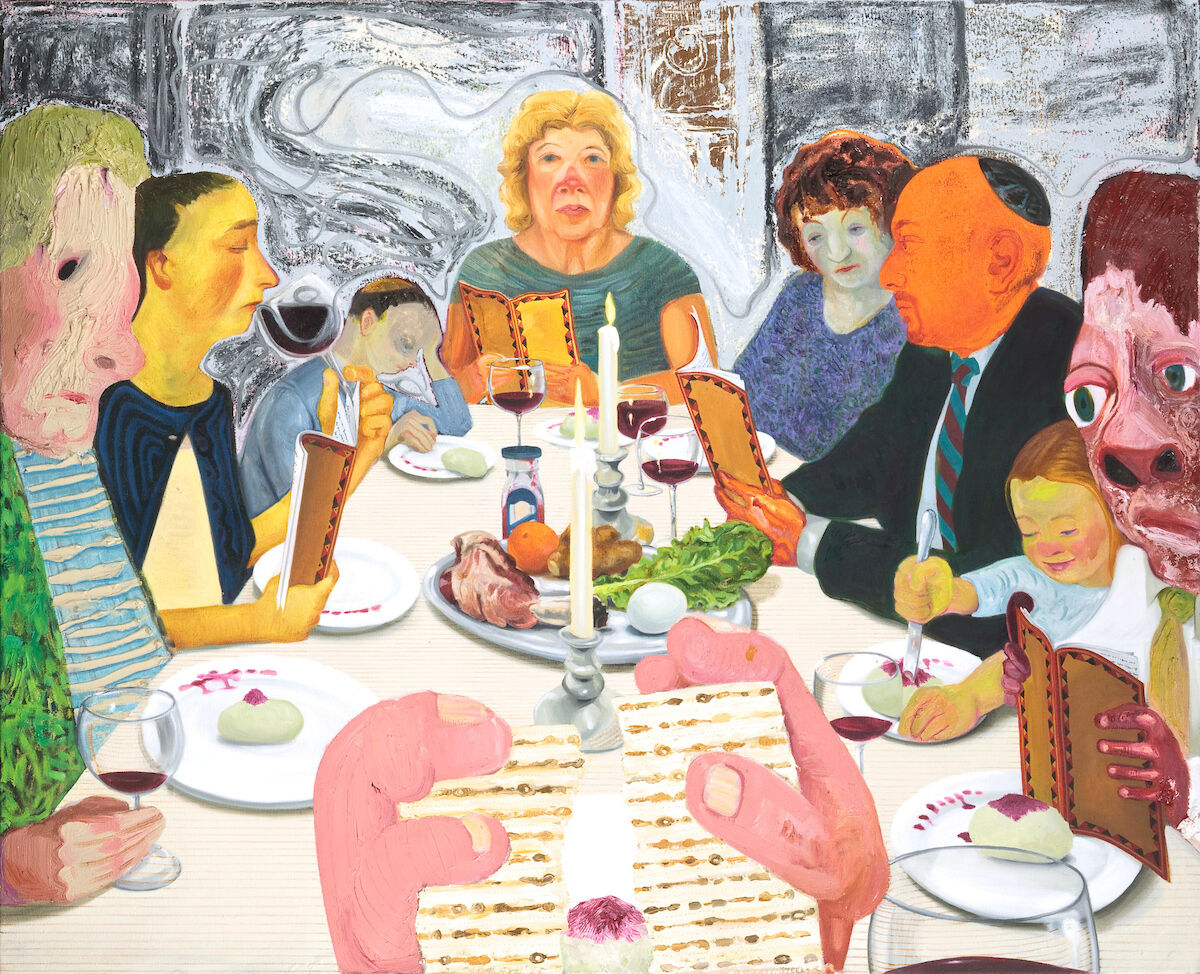 For 25 years, the permanent exhibition at the Jewish Museum, on New York City’s Upper East Side, offered a stately procession through 4,000 years of Jewish history. It included illuminated siddurim, or prayer books, and Torah scrolls; an 1808 portrait of a well-to-do Jewish woman painted by
Thomas Sully
; a display case that showed anti-Semitic caricatures of Jews; a newspaper screaming the headline “J’Accuse…!” (the writer Emile Zola’s famous defense of Alfred Dreyfus, a French Jewish officer wrongly accused of spying during the late 19th century); and a cigar box belonging to Freud. The display marched on to the Holocaust and the founding of Israel.
This grand narrative was the driving force, with the objects serving to illustrate that story. Now, the museum’s defining exhibition has been reimagined.
With around 575 pieces on display, the new “Scenes from the Collection” leans much more heavily on modern and contemporary art to provide an introduction to the museum’s holdings, touching on Jewish culture and identities in numerous ways without succumbing to didacticism. This time around, each object is allowed to tell its own story, with context and contrast often provided by adjacent objects. As a result, and in step with our times, the exhibition has moved away from any perception of a singular Jewish experience, instead underlining a variety of evolving traditions and experiences relating to Jewish faith and culture. The multifarious presentation will also change every six months or so, in order to show a greater variety of objects, with the repeat visitor in mind. (This new format is itself expected to last only some five years.) 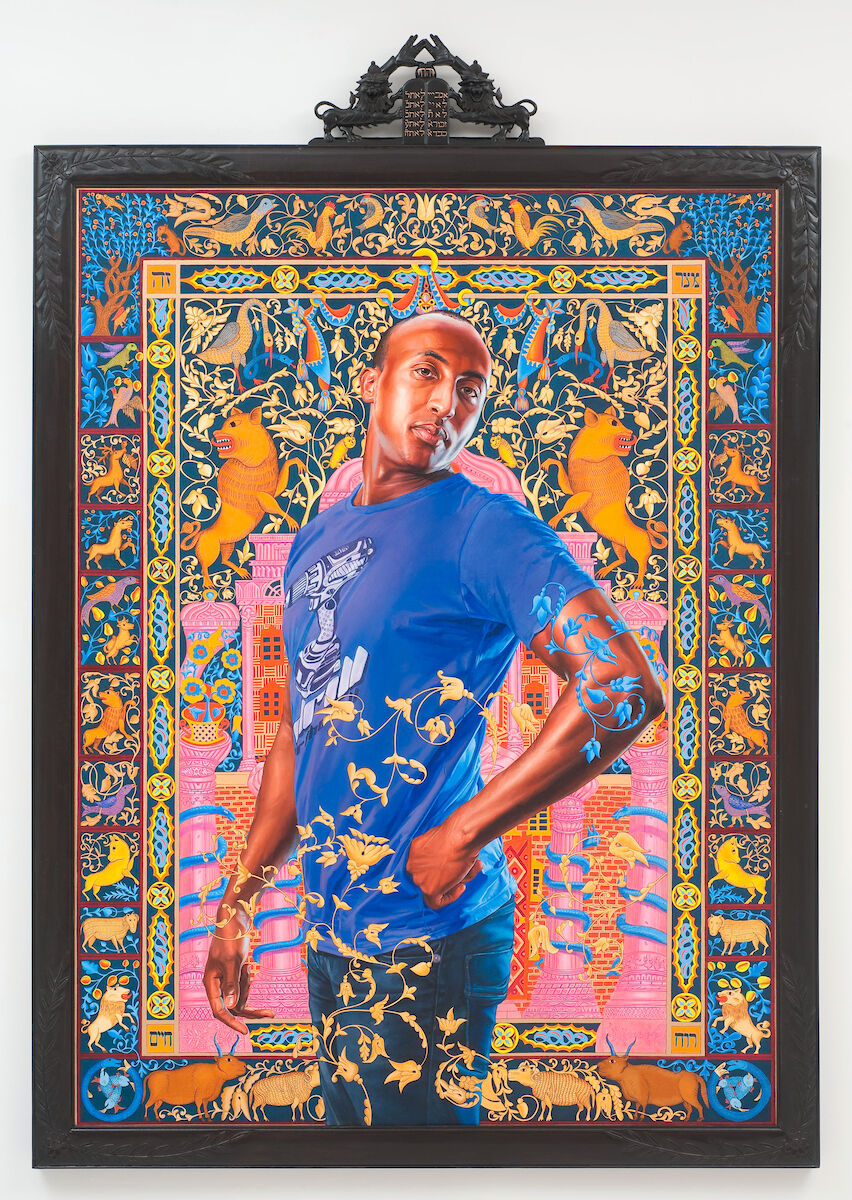 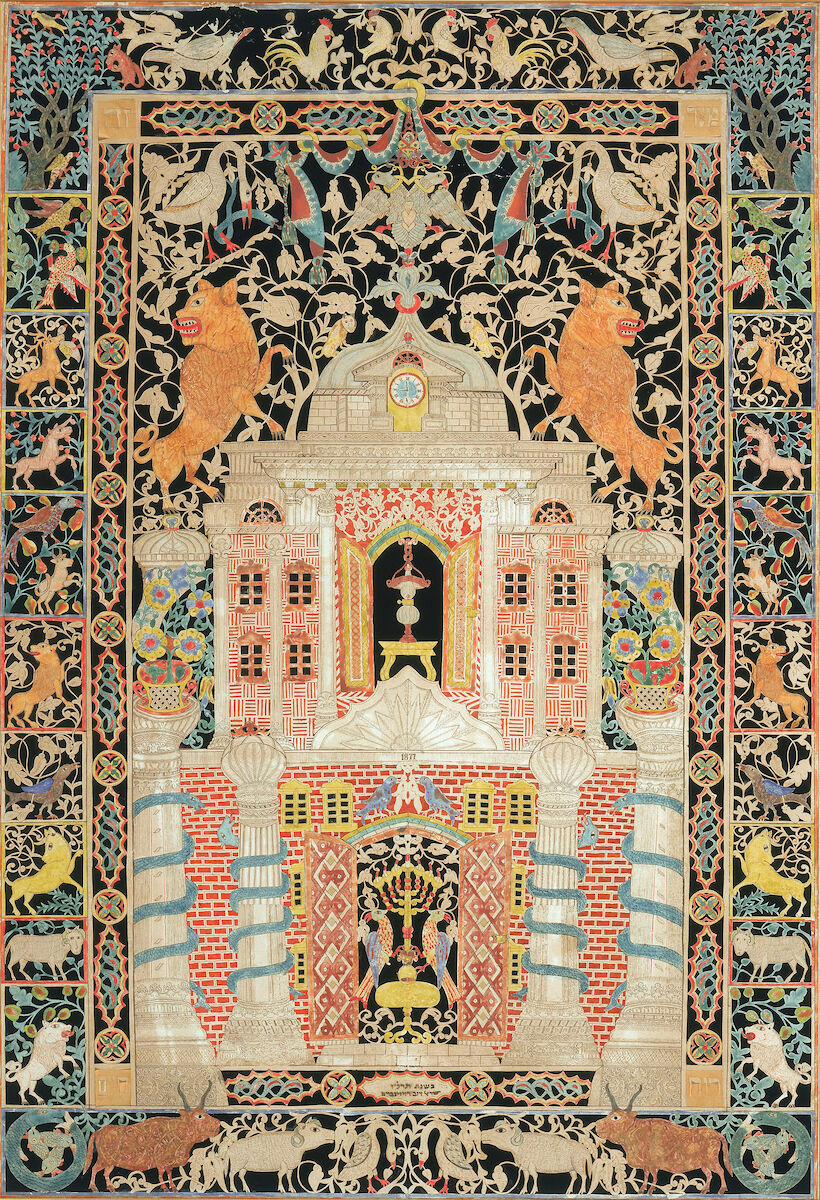 The first of seven displays, or “scenes,” as they’ve been conceived, features around 50 of the Jewish Museum’s major works that reflect, in the words of Senior Curator Susan Braunstein, “the many different ways of being Jewish,” as well as the experiences Jews share with other cultures. Take
Nicole Eisenman
’s Seder (2010), a playful and witty painting of family members around a dinner table, almost certainly Western Jews and undoubtedly white. They are alternately affectionate, bored, and self-involved. One can imagine the piece appearing as an illustration in a children’s book on Passover—except our initial understanding of the scene is challenged by the fact that, at the edges of the foreground, some of the family seem to morph into monsters, representing, perhaps, a certain alienation from this tradition or from one another.
Nearby,
Kehinde Wiley
’s Alios Itzhak (2011) is a portrait of an Ethiopian-Israeli Jew. Wiley, whose portrait of President Obama will be unveiled on February 12th at the National Portrait Gallery in Washington, D.C., is known for painting young black men in classic poses from European art, often against decorative backgrounds. In this portrait, Wiley’s background mimics the design of a 19th-century mizrah (Israel Dov Rosenbaum, 1877), a plaque that is placed on the eastern wall of a synagogue to indicate the direction of Jerusalem. The pattern is derived from a particular mizrah that features in the Jewish Museum’s collection, and which is placed alongside the painting.
The complex nature of Jewish heritage and ethnicity is expanded by a Torah ark displayed to the right of the Wiley painting. Originating from the Adath Yeshurun Synagogue in Sioux City, Iowa, the ark is the work of Abraham Shulkin, an immigrant from what is now Belarus. It’s quite clear that the object provided inspiration for Wiley’s frame. 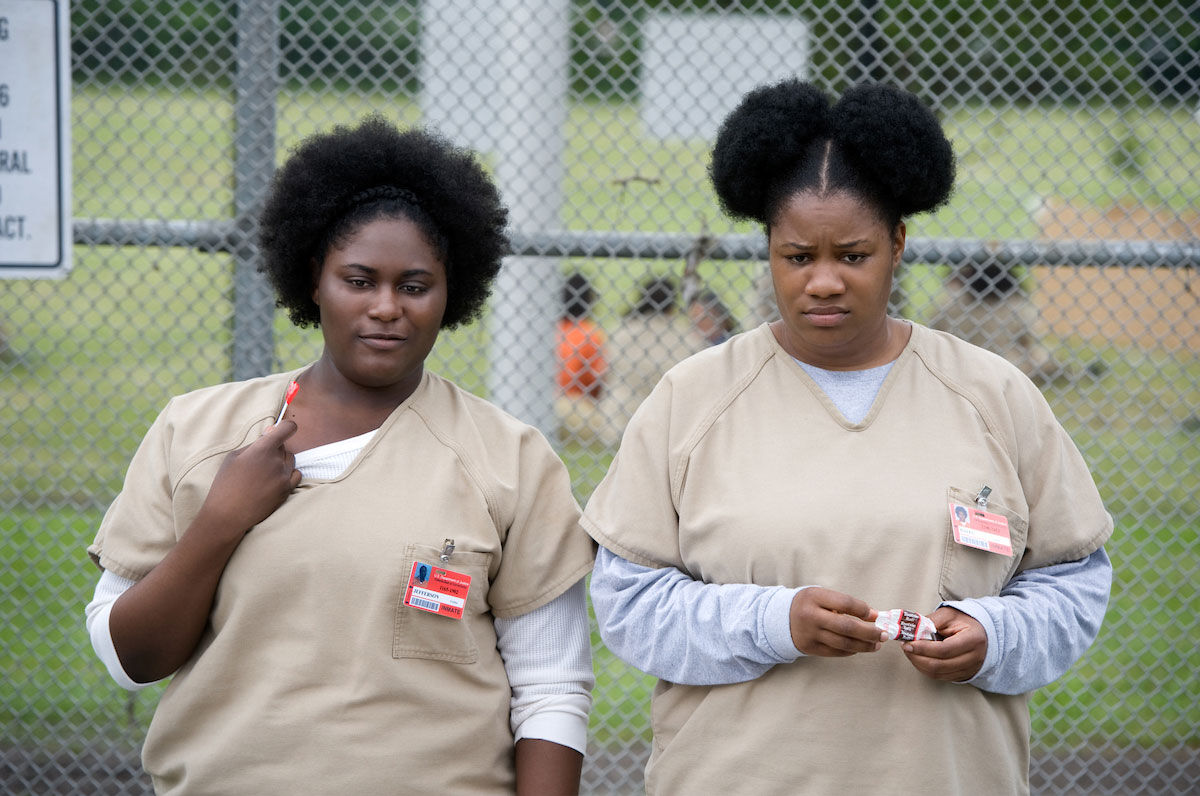 Advertisement
Racial expectations are further challenged by a television screen that runs a continuous loop of broadcast clips. In one such cut, from the ABC series “Fresh Off the Boat,” a young Chinese boy is sent to befriend a new student in his class, who is also Chinese. At first thrilled to have another Asian kid in school, he discovers—to our amusement and his frustration—that the new boy was adopted by Jews, his name is Phillip Goldstein, and they have absolutely nothing in common. In a poignant clip from the popular Netflix show “Orange Is the New Black,” set in a women’s prison, a black inmate who has been studying Judaism struggles to convince a rabbi that she should be accepted as a convert. Asked why she’s adopted the faith, her answer is simply, “I think I’ve finally found my people.”
Elsewhere, the complexities of Jewish identity emerge in different ways. In one gallery,
William Anastasi
’s painting Untitled (Jew) (1987) has the single, three-letter word “jew” painted on the upper left square of four canvases joined together. “For Anastasi, who is not Jewish, the term ‘jew’ is the most charged word in the English language, having both positive and negative association,” the museum’s online catalog entry notes. The blandness of the lettering, almost like a typewriter font, and the fact that it appears in lower case—plus the refusal of the word to fit into the upper-left canvas, where it begins but spills over into an adjoining canvas—create tension and uneasiness. The word feels unmoored, without context to determine whether it serves as affirmation or invective. 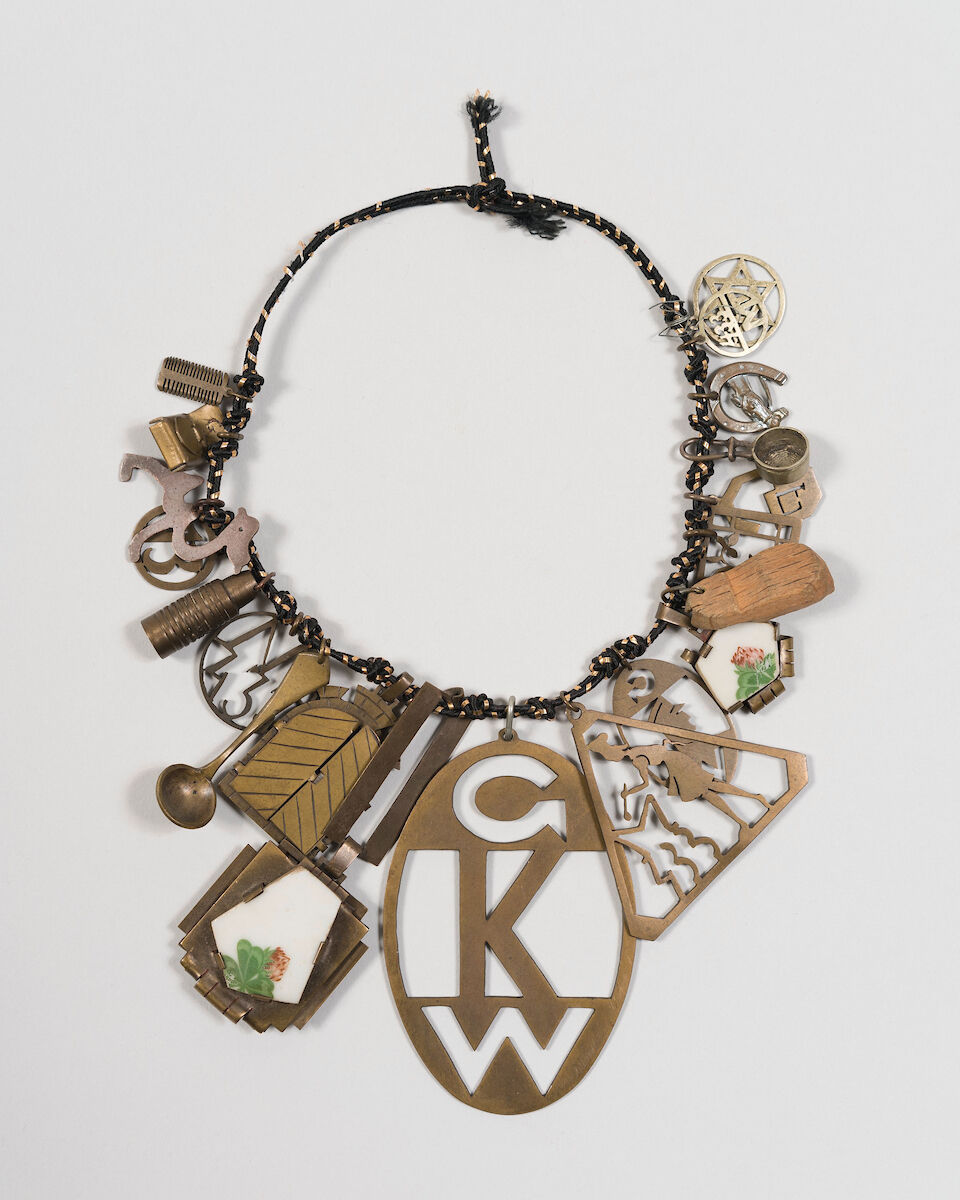 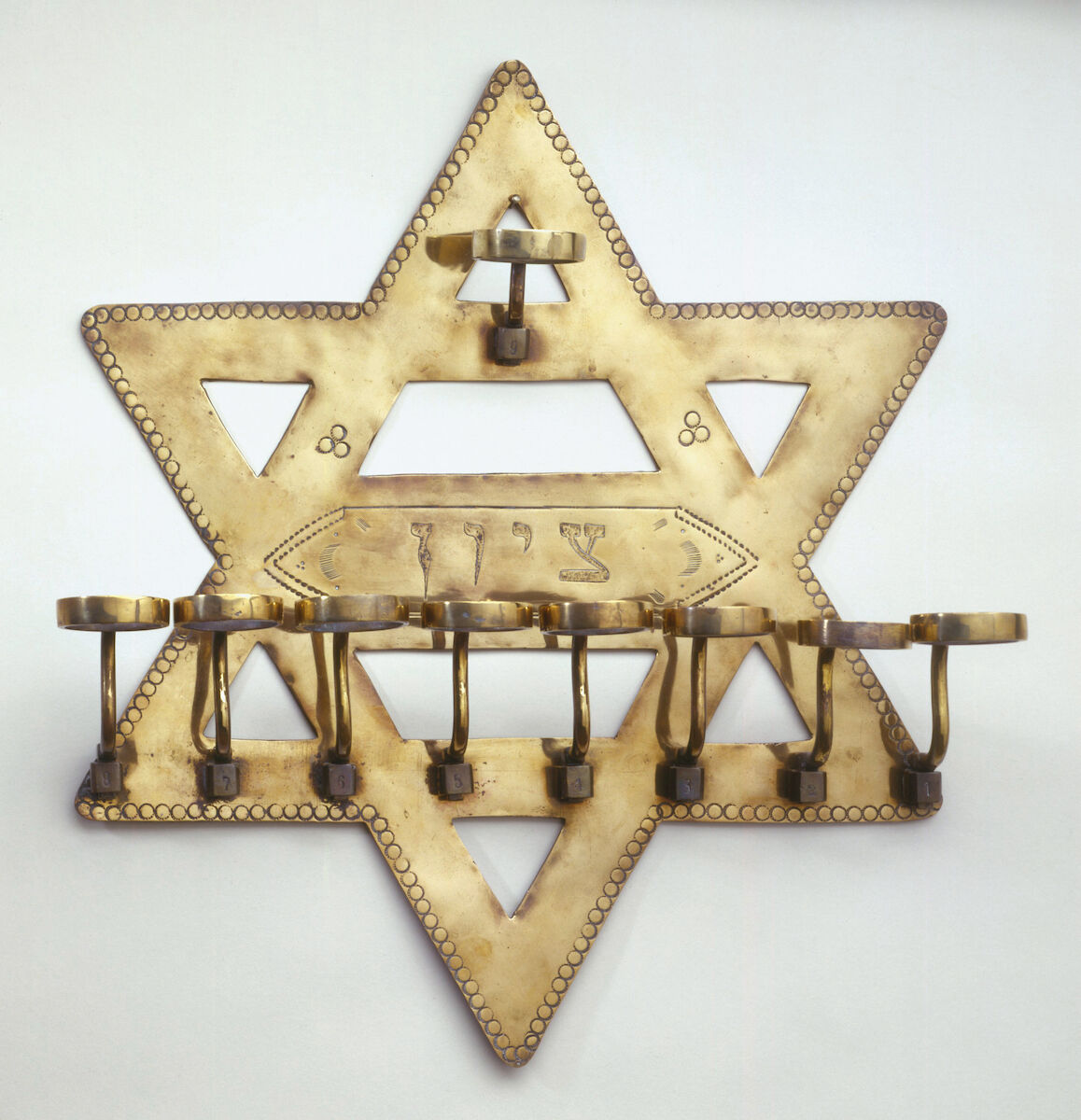 Hanukkah Lamp, India, end of the 19th-20th century. Courtesy of the Jewish Museum.

Next to it,
Mel Bochner
’s painting The Joys of Yiddish (2012) is packed with yellow words in Yiddish, set against a black background. The words represent insults—a few loosely translated examples: thief, whiner, old fart, pest, nut-job—that might serve as spice in a conversation, and which are often used by Jews to describe other Jews. Placed next to Anastasi’s Untitled (Jew), it could almost serve as a series of additional, ironic definitions that wink at Jewish humor.
The double-edged nature of identifying oneself as a Jew is confronted directly by a section of the exhibition that explores signs and symbols, and which includes a belt by the designer Isaac Mizrahi that features a buckle with a large Star of David on it. Alongside it, Mizrahi is quoted as saying, “If crosses are everywhere, why not make the star of David ubiquitous too?” One possible answer lies in a display case across the room that contains badges marked with the Star of David and the word “Jew,” in both German and French. They are patches that Jews were forced to wear during the Third Reich. 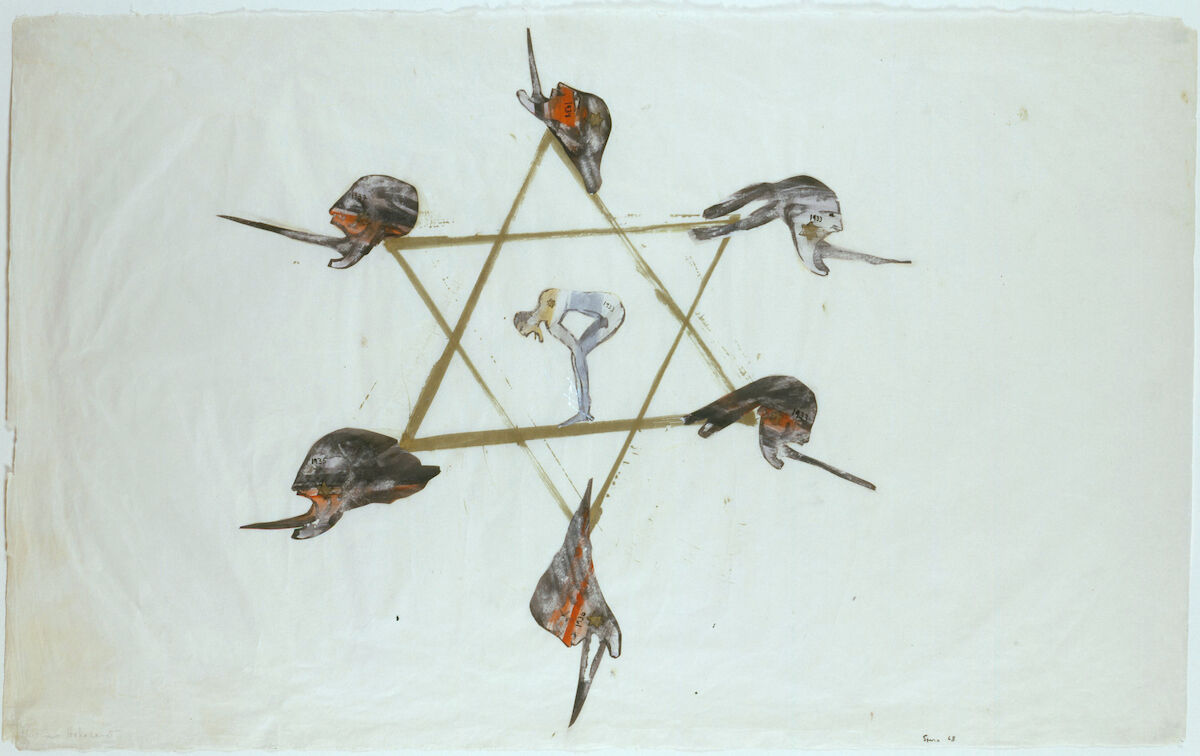 Nancy Spero, Victims, Holocaust, from The War Series: Bombs and Helicopters, 1968, 1968. Courtesy of the Jewish Museum.

But the exhibition works not only to establish common experiences among Jews, but to find echoes across other cultures. One such example is
Claire Fontaine
’s Untitled (Tears) (2013), an artwork that consists of neon signs hung from the ceiling with the words “isle of tears” written in the nine languages most frequently spoken at the Ellis Island immigration center, once a major port of entry for migrants to the United States. For some, Ellis Island was the beginning of a new life; for others who were denied entry for health or other reasons, the promise of migration—an experience central to the Jewish DNA—was ultimately empty.
The exploration of similarities across cultures is more problematic in
Nancy Spero
’s painting Victims, Holocaust (1968), in which heads with lance-like tongues, representing Nazi death camps, appear at the tip of each point in a Star of David, and the center shows a figure bent over in agony. The painting was created in protest against the Vietnam War. In the 1960s, it wasn’t uncommon to hear comparisons made between the bombings in Vietnam and the Holocaust. Yet the parallel runs the risk of denying each event its historical specificity. Perhaps more effective in its comparison is
Mark Rothko
’s Crucifix (1941–42). When news of the Nazi atrocities crossed the Atlantic, Rothko began to paint a series of surreal crucifixion images, among his last figurative works. His image takes its cue from the fact that Jesus was a Jew. 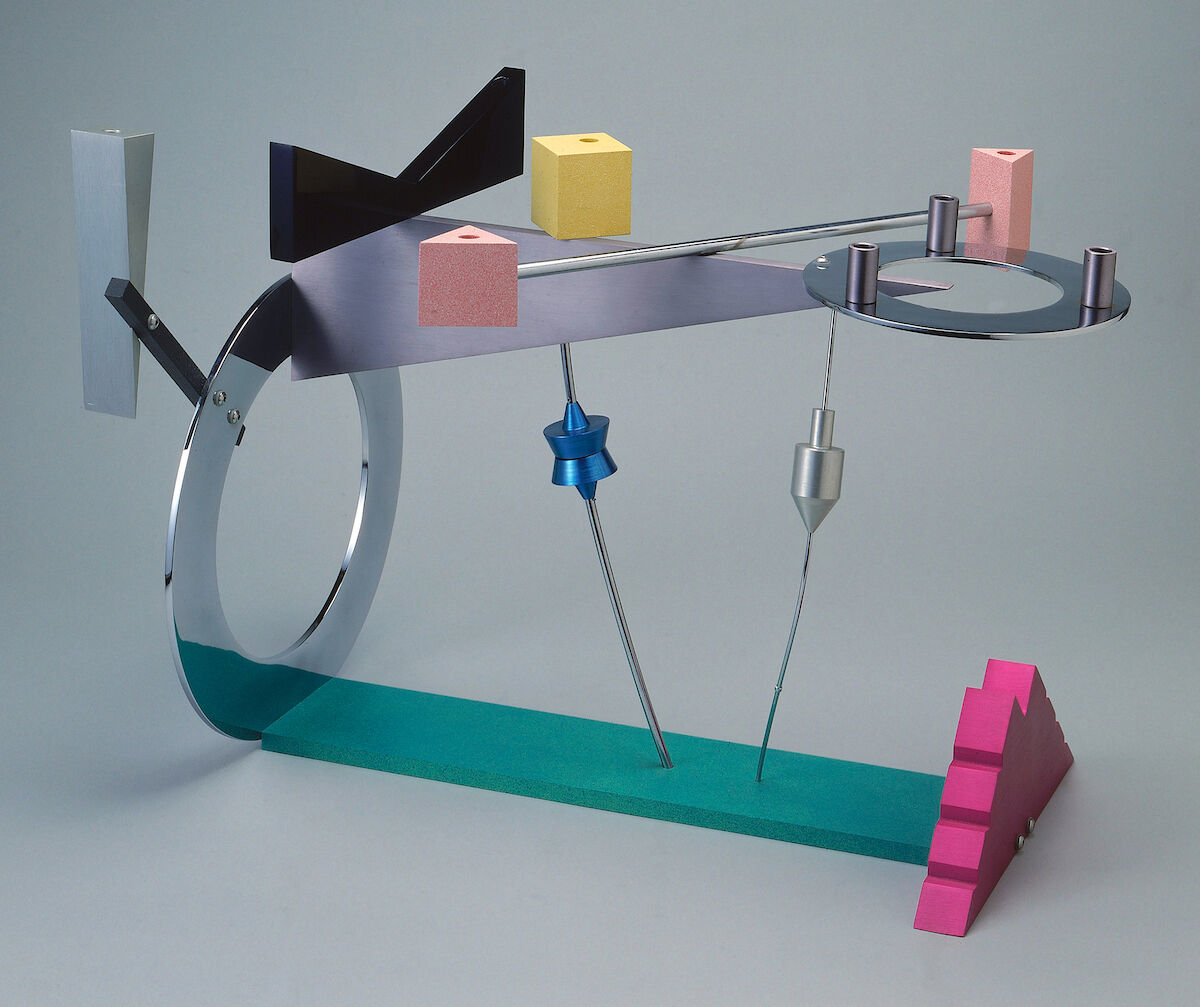 The exhibition underscores so many of Judaism’s countless cultural overlaps and divergent experiences that one has to wonder: How much change can a tradition undergo while still maintaining its identity? Nowhere is this tension more apparent than in the very first display case, featuring a series of menorahs. One example shows the story of Judith and Holofernes decorating the menorah. As Braunstein explains, the story was associated with Hanukkah during the medieval period, when it was pictured on the objects. Despite its dated reference, the menorah looks familiar enough, as do many of the others on display, regardless of their striking differences in style.
But
Peter Shire
’s menorah is another story. Associated with the
Memphis Group
design movement founded by
Ettore Sottsass
, Shire ignores the two traditional looks of the menorah—the candelabra and the “bench,” with lights lined up in a row at the bottom—and creates a holiday lamp in line with his general design philosophy: bright colors and asymmetry. Voilà, a post-modern menorah. The 1986 design looks like nothing most people would have ever seen. But does the lack of a familiar shape detract from its value as a ritual object? 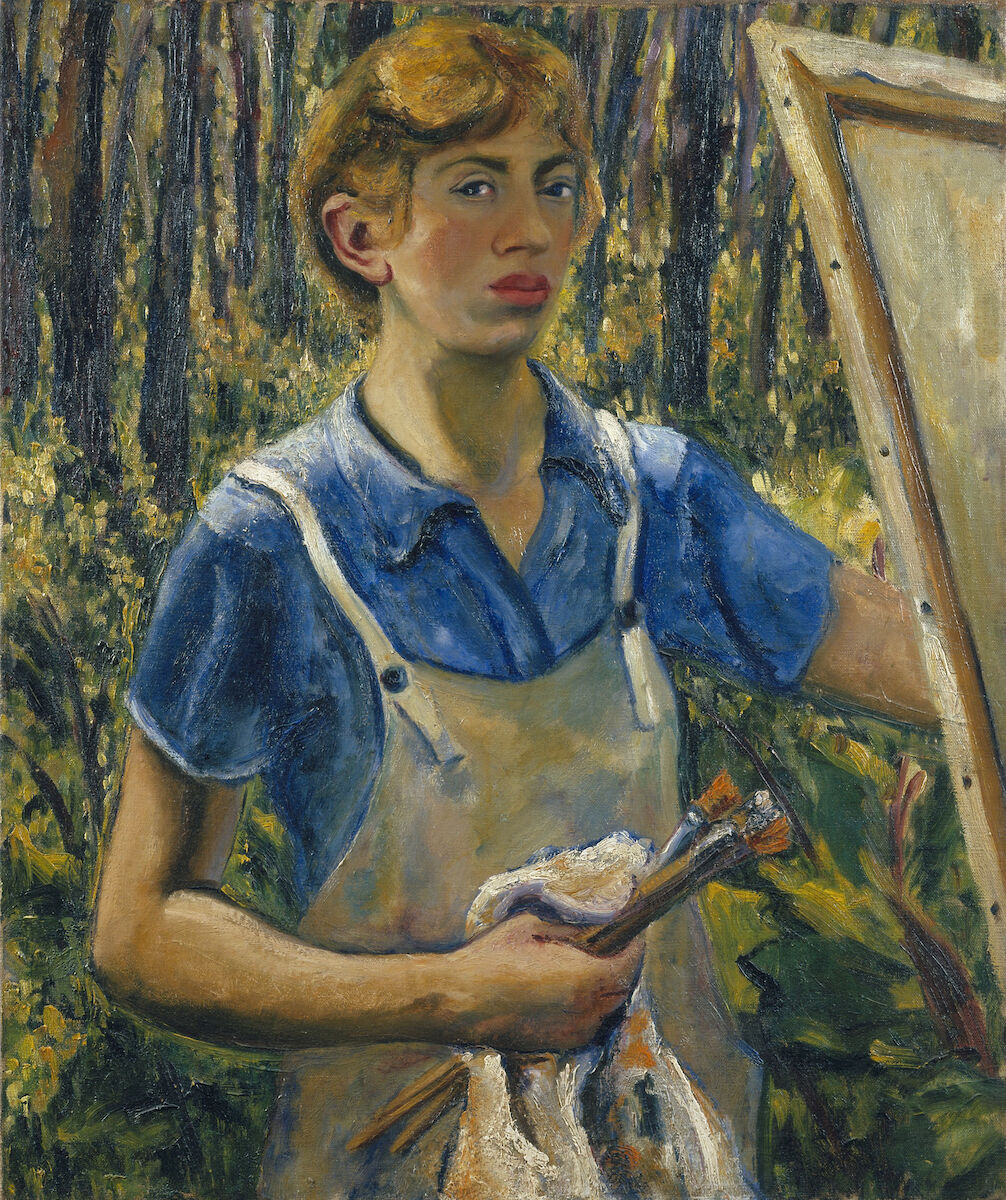 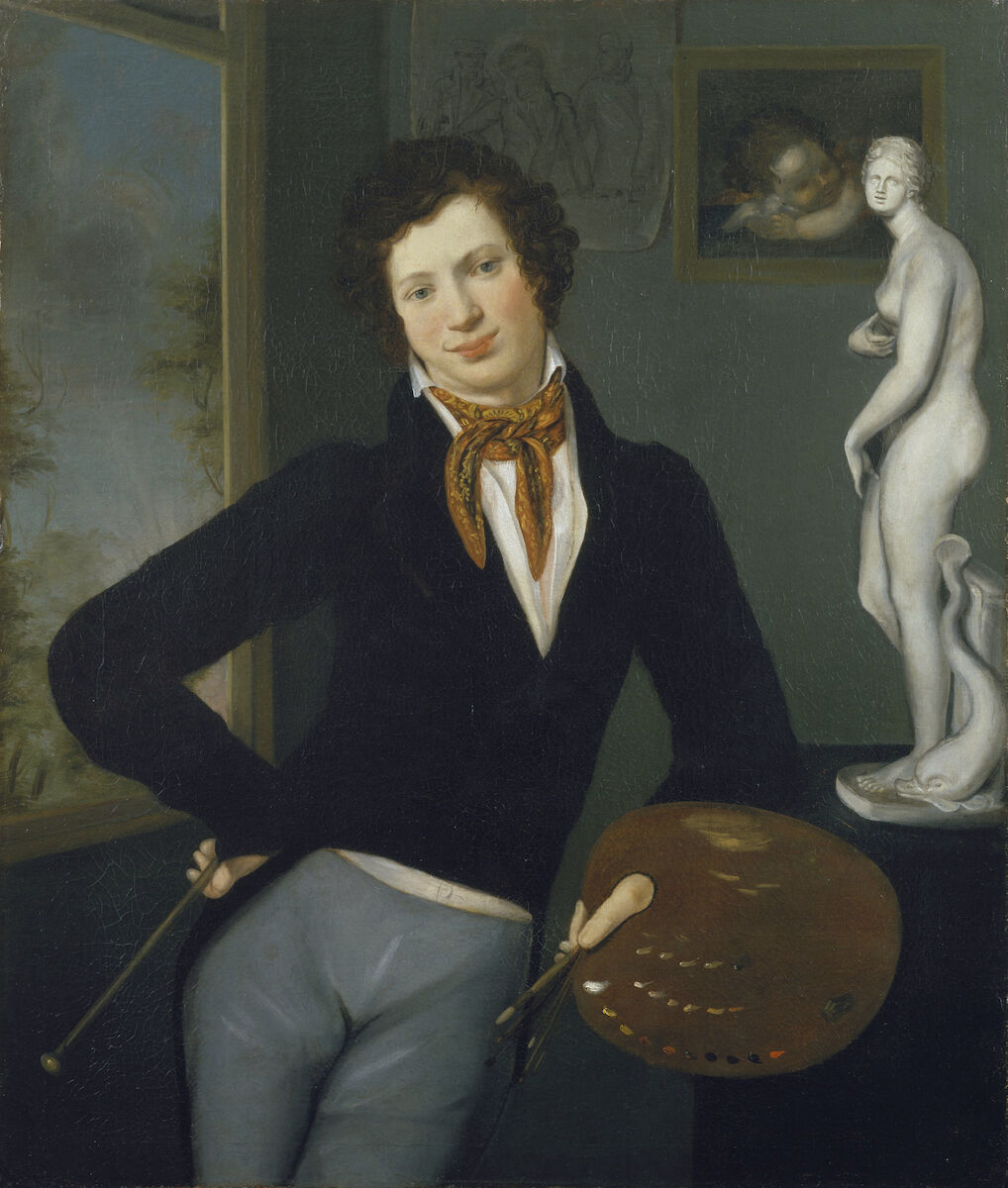 A final section of the exhibition is given over to self-portraits. In many of them, the subject’s Jewishness is invisible.
Lee Krasner
, roughly in her twenties, stares out from the canvas defiantly. In an elegant self-portrait painted while he was still in his teens,
Moritz Daniel Oppenheim
suggests a perfectly assimilated Jew. Oppenheim was, in fact, the first Jew in Germany to be allowed to study academic painting, and was known for painting Jewish subjects with a high degree of sympathy.
Ethnicity is confronted more directly in the works of
Ross Bleckner
and
Deborah Kass
, who both trade realism for symbolism. Bleckner’s painting shows a multicolored rainbow for gay pride, decorated with a Jewish star in low relief. Kass’s portrait, Subject Matters (1989–90), is more complex; on the left panel, she identifies herself as a woman through a series of headless cartoon figures, each of which looks like a young girl in a skirt. In the slim center panel, there is an “I.” But the right-hand panel, the most striking, has a pair of eyeglasses with a mouth behind each lens, referencing
Jasper Johns
’s well-known sculpture of an art critic, although a hungry eye is arguably a necessity for an artist. Beneath this single pair of spectacles, the artist has painted the famous image of a pile of eyeglasses from Auschwitz, the haunting vestiges of murdered Jews.

The museum has suggested that the exhibition can be considered a self-portrait of itself: shifting and multifarious. Its gaze is both inward and outward, and aware of the tensions and difficulties that arise in defining one’s identity, a reality that they’ve attempted to submit to through a loose curatorial approach. “We picked what we loved and tried to make it work,” Braunstein said at the exhibition opening. It often works extremely well. It is quite possible, however, that the visitor’s response will depend on how they respond to such a porous, open framework—whether they prefer a stronger, familiar narrative, or a constellation of objects that underline the great complexity and variety of the Jewish experience. Put me in the latter camp.
Bill Glass
Related Stories

The Miraculous Survival of a Holocaust Victim’s Buried Photos 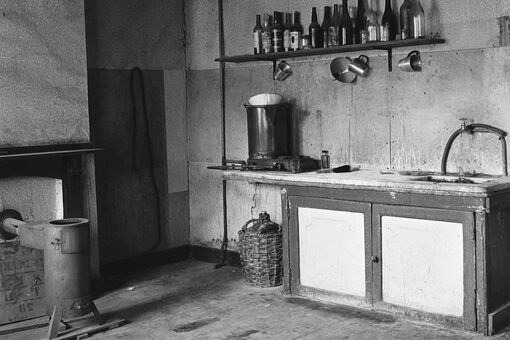 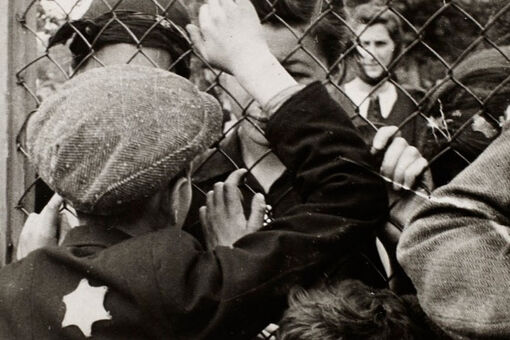