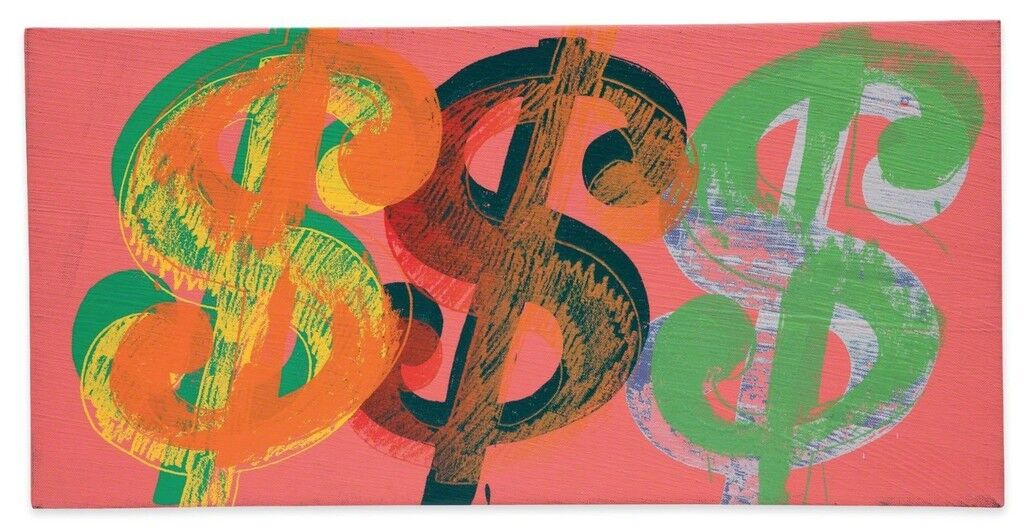 Andy Warhol
Dollar Sign (Pink Background), 1981
Joseph K. Levene Fine Art, Ltd.
Rumors are circulating that President Donald Trump plans to eliminate the National Endowment for the Arts (NEA) and related government cultural agencies, a long-held priority for conservatives who see arts funding as wasteful and unnecessary. But that move might also trip up Trump’s plan to rev up economic growth, since arts and culture represent a significant—and growing—share of the U.S. economy.
The NEA’s budget is less than $150 million, a smaller sum than individual paintings have recently fetched at auction, and a mere .004% of the U.S. budget. But it helps support a larger creative economy that in 2013 employed 4.74 million people and contributed more than $700 billion (or 4.2%) to U.S. GDP, according to figures from the Commerce Department.
A little investment can go a long way. Research by two Williams College economists, Stephen Sheppard and Peter Pedroni, suggests investment in cultural institutions has a long-term positive effect on growth and job creation. They found that increasing investments in nonprofit cultural institutions across nearly 400 metropolitan areas created, on average, a significant multiplier effect. Each additional dollar of investment generated $1.20 to $1.90 of per-capita income.
“Our analysis suggests that eliminating the NEA’s already too small budget is likely to lead to long-run decline in total employment,” said Sheppard. That would not be a strong look for Trump, the guy who billed himself on the campaign trail as “the greatest jobs president that God ever created.”

So what are we talking about exactly when we refer to the creative economy? Its contours are notably hard to define. (Mr. Sheppard recalls debates among peers about why pencil manufacturers should be included, but not paper manufacturers.) But for measurement purposes, it helps to use the Commerce Department’s classifications, since that’s the agency that gathers data on the economy.
The Bureau of Economic Analysis (BEA), a branch of the Commerce Department, uses the definition “creative artistic activity, the goods and services produced by it, the goods and services produced in support of it, and finally the constructions of the buildings in which it is taking place.” The BEA started tracking the specific contributions of arts and culture to the overall U.S. economy in 1998, through the creation of an industry-specific satellite account. Other satellite accounts look at the contributions of sectors like tourism or health care.

Economic activity for the arts and culture industry grew at a real, or inflation-adjusted, rate of 2.5% in 2013, a faster pace than the economy’s overall growth rate of 1.7% that year. Between 1998 and 2013, the arts’ contribution to GDP has grown by 32.5%, meaning that it is an increasingly important sector of the economy. Most recently, the leading contributor to growth in 2013 was the “other information services” subsector, which grew 21.2% year over year and includes internet publishing, broadcasting, and web portals. Trends within the creative economy reflect broader shifts within the economy at large. Industrialized countries have for decades been moving towards a service-based economy, with technology growing increasingly important across every sector of the economy. 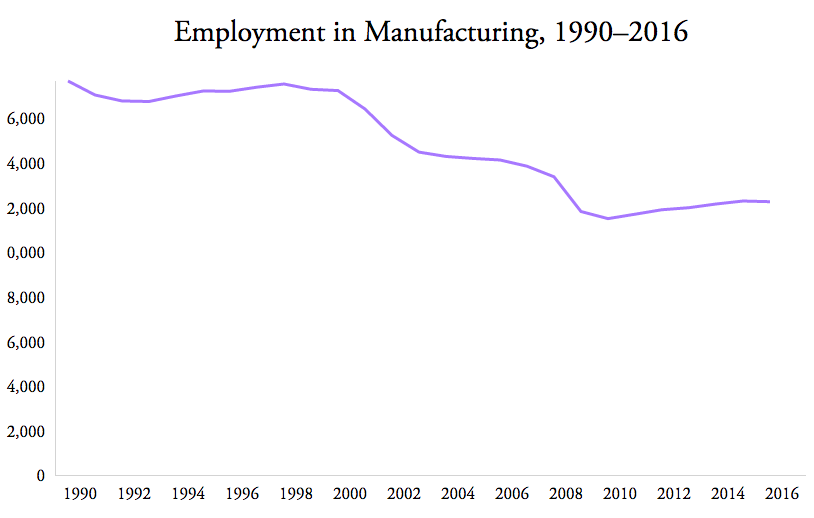 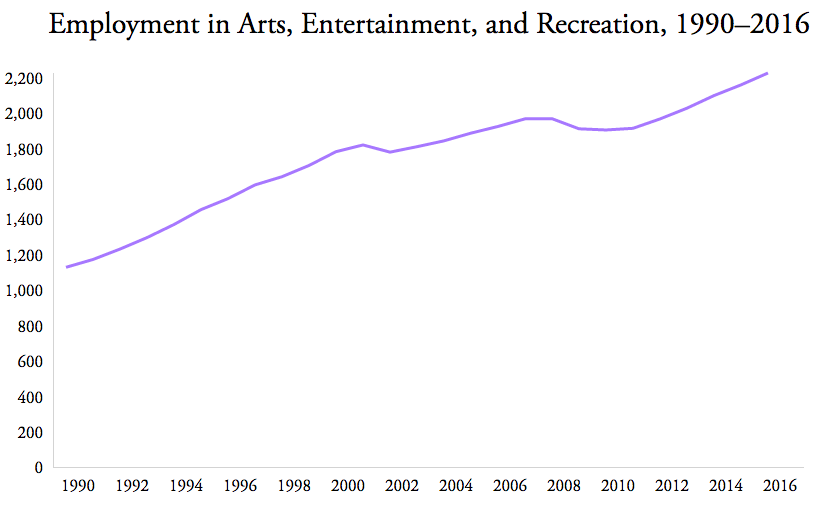 So how do the economic benefits of culture play out, exactly? Mr. Sheppard said the answer is not entirely clear, and notes the impact of arts investment ranges widely across different cities. But he cited several hypotheses, including culture’s role in the broader tourism industry, which reels in out-of-town dollars and employs local residents. He also pointed to a more indirect effect: a high concentration of cultural organizations can help foster creativity, which in turn leads to more innovation and overall productivity.
That notion finds support in Sheppard’s other research, which found that clustering local cultural organizations together has a stronger positive impact on per-capita GDP than when they are more widely dispersed. That finding is of a piece with the commonly accepted idea that cities prosper from their dense concentrations of people and firms, which leads to cross-fertilization of ideas and products. It’s also entirely possible the economic impact of the arts operates through both of the above channels, and others that have not yet been identified.

Fred Bidwell, a former advertising executive and longtime contemporary art collector, is gambling $4.2 million to test these hypotheses. That’s the cost of putting on FRONT International, a triennial art fair set to launch in the summer of 2018 in his adopted hometown of Cleveland, Ohio.
He estimates the $4.2 million sum, which he is raising from private donors, foundation funding, corporate sponsorship, and an economic development grant from the city, will generate a direct economic impact of $50 million over its 80-day operating period. Chief among the drivers of that impact are the 300,000 expected attendees, many of whom will be visiting from out of town, spending money at the city’s hotels, restaurants, and shops.
The gamble is based on more than just a hunch. In 2013, Bidwell and his wife Laura opened Transformer Station, a nonprofit art gallery in an abandoned 1920s power station that displays their collection. Since the gallery opened in the underserved Ohio City area, it’s become one of the fastest-growing neighborhoods in Cleveland, with real estate developers pouring in alongside new shops, restaurants, and employers.
“If arts and culture could bring people to a neighborhood, could it bring new people to a city?” he wondered.
Bidwell also hopes the triennial will enhance Cleveland’s economy through “creating a culture of creativity and innovation,” something he says is often missing in discussion around workforce needs, which tend to focus on science, technology, and engineering skills.
“Creativity is the essence of innovation, and artists open that up to us,” he said. “I don’t care if you’re an accountant or a programmer or what, creativity is foundational.”
The sentiment is shared by those running the Art Basel Cities initiative. It will see Art Basel—best known for its art fairs in Basel, Miami Beach, and Hong Kong—partner with major metropoles globally to increase their cultural infrastructure and programming, with one aim being to foster more attractive environments to which local companies can recruit talent.
Buenos Aires is the first city to make it on Art Basel’s list. But Bidwell says so-called Rust Belt cities in the industrial Midwest like Cleveland have faced their own challenges when it comes to culture.
“Midwestern cities for a long time went down the road of, first we have to create jobs and then we’ll build sports stadiums, and that’s just not a complete picture,” he said. “You just cannot as a city attract and retain world-class talent if you don’t have a fully rounded cultural scene.”
This raises the question of whether Mr. Trump’s job creation strategy, which has, so far, focused largely on manufacturing, might be better served—or at least bolstered—by boosting funding for the arts.
—Anna Louie Sussman
Related Stories

Art Basel Has a Plan to Create New Cultural Capitals 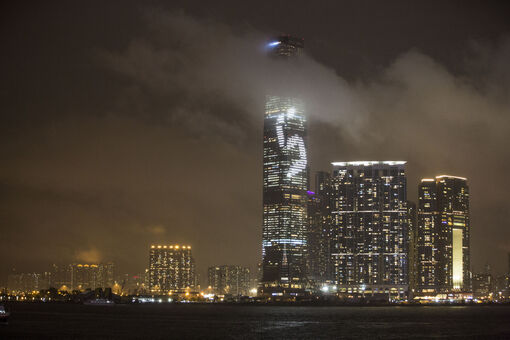